I finally finished a display idea that I had kicking round for a few years now. A shelving unit, but decorated to look like film strip. Each shelf separating each film cell 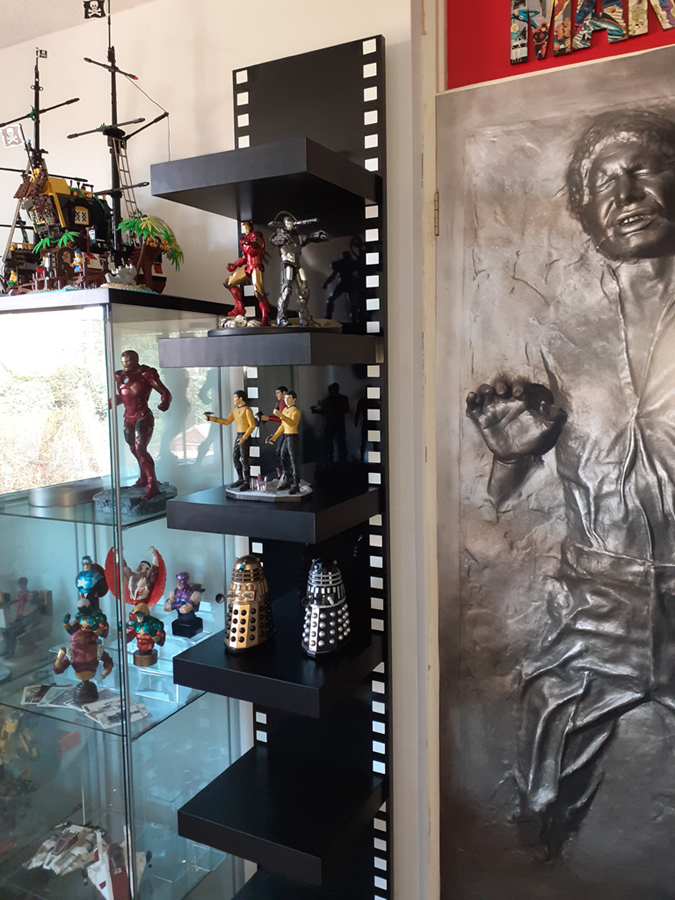 The Prototype
A few years ago, I had bought a number of Ikea floating shelves. Then the film strip was black card with the sprocket holes cut out. The only problem was that I had to drill twelve holes in the plasterboard with rawlplugs to mount the shelves leaving a lot of repair work behind if I ever moved them. Also as it happened the wall backed onto the bathroom and a leak from the bath caused the plasterboard to weaken in places and some of the shelves ripped off the wall 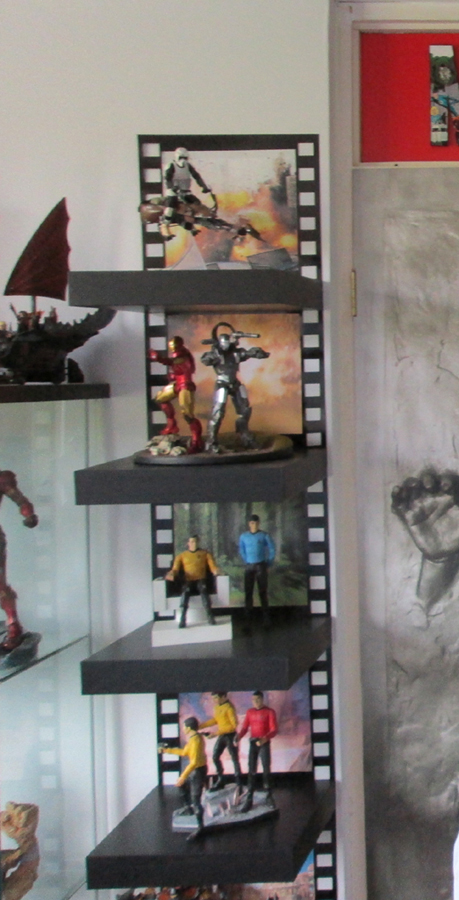 Everything was repaired and I kept the shelves. I always intended to make a better, sturdier version, only I never got round to it. A year of working from home in my cluttered man cave forced me to take stock and finally start tidying up and organizing things better here. Fast forward to a month ago and I started moving again on this idea.

I couldn't find what I wanted off the shelf at the local DIY stores. I could buy plain, untreated wood, but I'd have to paint and stain it, which I wasn't interested in doing, so I had a piece custom cut. It's a thick, heavy piece. Taller then the door, and 2 cm thick. It's some sort of composite wood, and they laminated the edges as well. It's a nice shiny gloss black.


Construction
Not much to say here. As I said the wood was cut to size, as it turned out, I over estimated by about 8cm so removed that from the bottom. Drilled all the holes for the floating shelves. The sprocket holes are sticky backed plastic. Initially I cut out each piece and lined up one at time. This proved slow and error prone, so I just ran strips of while sticky backed plastic down each side then used a card template to act as a cutting guide when I cut each sprocket hole out with a sharp scalpel. Removed the excess white plastic sheet, and voila. 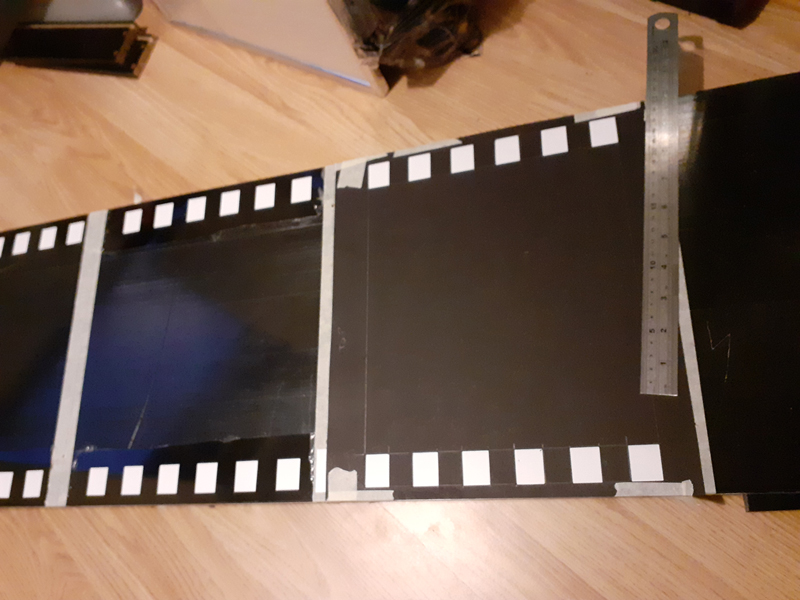 The base board sits proud of the wall by about 4 cm (what with the skirting board being in the way). So I padded that out with a block of wood at the back to hold it flush against the wall. Screwed though the base and the block, fastening it to the wall. The scree is hidden behind one of the shelves.

That's it, it's held up by one screw against the wall. Much better then the previous twelve I used before in the previous version. It stands upright on the floor and the items on the shelves are light enough, so it hopefully wont fall over. The base board is pretty thick and sturdy and so far, appears to be able to stand upright under its own weight without bowing.

I bought a beside cabinet and redesigned it a bit. To help it hold up the weight, I removed the feet and repurposed two of the drawer fronts for the base. (If you look closely you can see where they join together). The cabinet is screwed to the base board.

I found a image I liked on ebay. Self adhesive, so real easy to apply. The cabinet is weighted down by my heavy books, so hopefully the whole think will stay up this time. 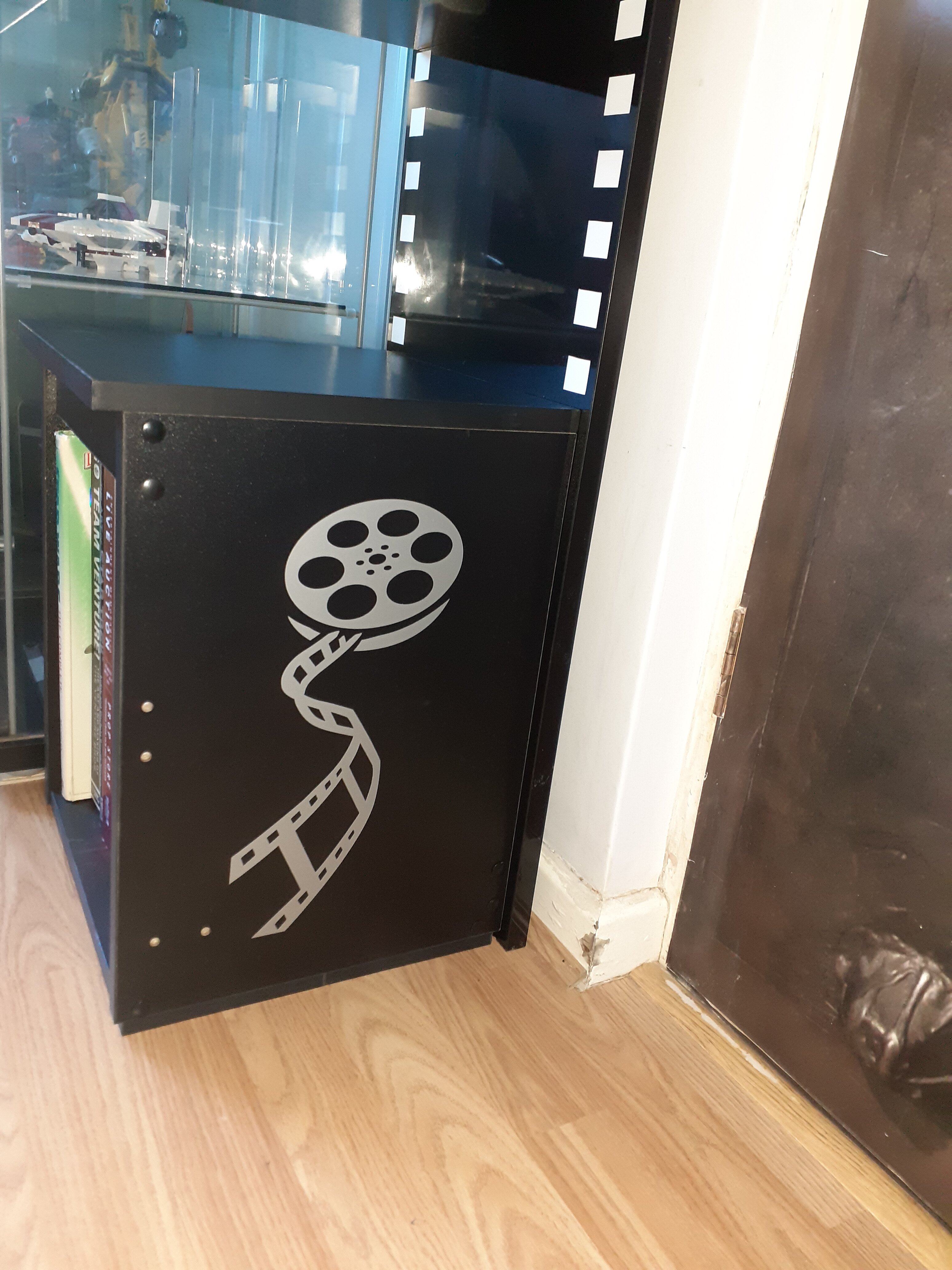 If you look at the original card prototype, you'll see scenes behind each shelf. I still might recreate that, representing the film cells, but held in place with magnets so they can be swapped out when I change the displays.


New Ikea Item
I might have missed this the first time round, but it now appears that Ikea now sell a similar base board for their LACK wall shelf unit. Well that might have saved me some money that had been available when I first bought the shelves. 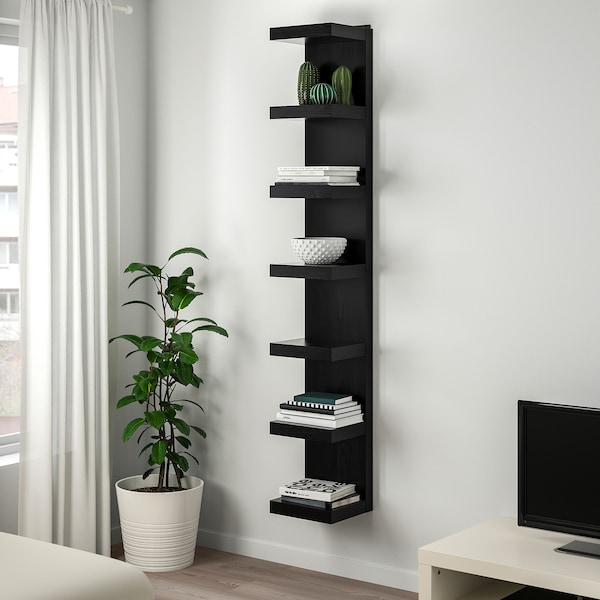 Still it really does look better then the card version I first had up. Looks solid and professional

That's a pretty neat idea! That could also be worked into DVD/Blu-Ray storage.

That is very cool!!