it's true... I had started out with Dreds from another source which were a good bit shorter than YOSHIWA1985's. I have since purchased a new set of Dreds from Casey that are the same length as my husband's in that picture for use with my new undermask.

Once I get it all put together and on me, I'll evaluate whether or not I like the new longer length, and if not then I will shorten the new ones up to match the old look. We shall see.

Picture you just posted with the two of you shows dreads that look perfect. IMHO anyway. Wish I knew who I got my last set from, they were from the UK, pricey but absolutely perfect. I could use another set for the new suit, the dreads on it are...you guessed...dreadful. :-(

You can't go wrong with Casey McCabe's dreds... we have bought four sets from him in total and they are outstanding both in terms of quality and value.

If you like I can put you in touch with him.

I would appreciate that. I'd better get a set before trying to do anything with the current ones so I'll be set up just in case.

I did receive a couple of replies from you, RODEWARYER... but there was no text in them. Were you using your phone, and there's some sort of hiccup with the mobile site?

kristen henry said:
K, so here's a quick pic of my finished suit. sorry it isn't the best quality... I was in a hurry to get to a Halloween party when i snapped it.

I will have to put this all back on and take some proper outdoor pics... BEFORE it snows!

It looks like maybe the site issues are fixed now, as I can again leave a comment.

inkmontser... I can see where you've quoted me above, but I can't see your reply. Weird.

rodewaryer... I still have not been able to read your replies to my PM. I think that might have to do with the site issues too.

Oddly enough I had issues with Predatorium and Imageshack at the exact same time. Sure glad there wasn't another or I'd have to raise the flag. And both came back up about the same time too. Just glad we're back up.

Anyway RODEWARYER... I had only said in response that Casey is the best, and that the only trouble you'll have with him is in trying not to buy everything he offers. LOL

Here are a couple of pictures from this past weekend at a P.A.W.S. animal rescue event here in Michigan:
The other Predator is John Quick, and the Leonardo is my Hubby YOSHIWA1985.


The kids loved Leo, but were mostly terrified of me 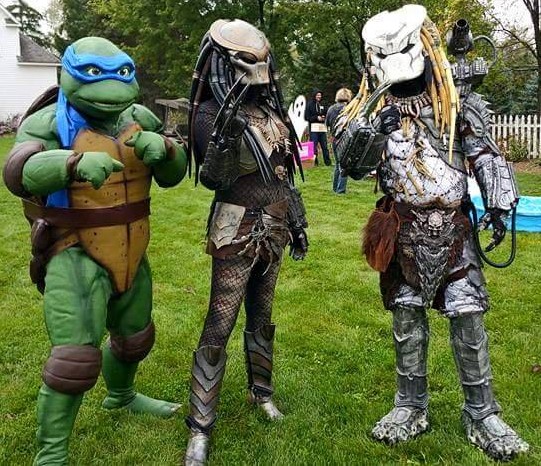 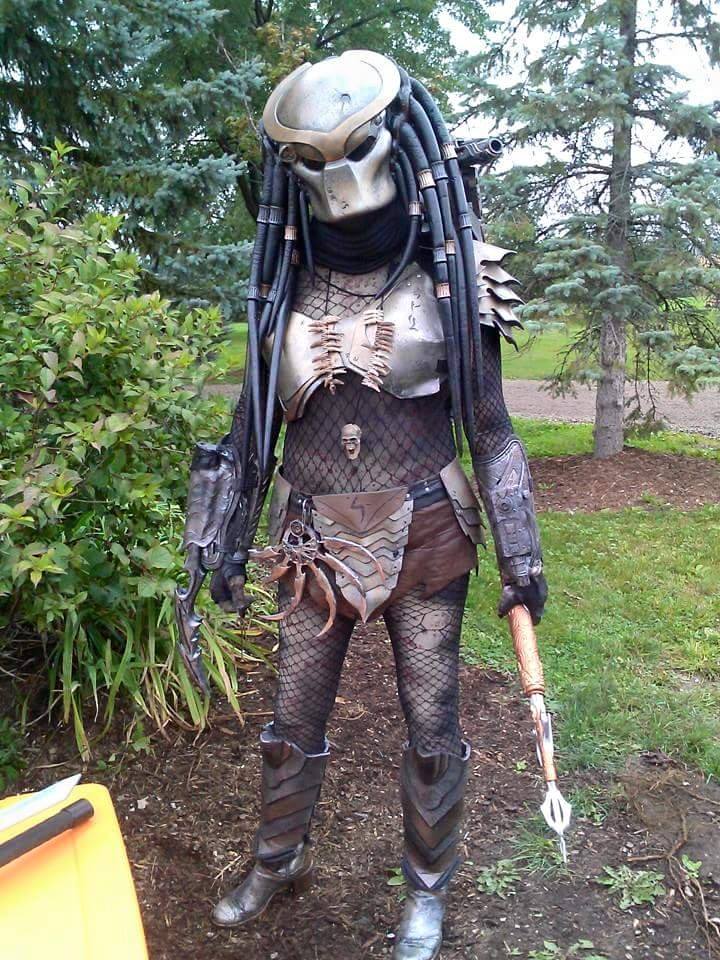 Now my Lady Predator has 50% longer dreds thanks to Casey McCabe.

Now... honest opinions... do you all like the shorter or longer dred look for this outfit?

The hair can make the woman, the dreads can make the...fairer Predator too. Longer, better. Yep.

Is your Pred the older of the pair? Ascetics aside, I've associated the dred's length with age. Visually; however, I love the longer dred look as it applies well to the overall feminine look.

It's the same outfit I'm wearing in both cases... I've only lengthened the Dreds.

I had thought of Dred length as an indicator of age as well, although as we all know there are examples of advanced-age humans with very short hair as well as young children with gloriously long hair... so it isn't a hard and fast rule. If one theorized that the Yautja never trim their dreds--or in fact CANNOT trim them, I.E. theu are akin to appendages of the head--then presumeably they would accurately reflect the age of the hunter(ess) merely by their length...although this would only be speculation.

Looking at the movies, we seem to see the opposite. P1 had the shortest dreds of all we've seen on screen, and the three Yautja in AVP have had markedly longer dreds...even though it has been stated by the creators that they were conceived as "teenagers" of the species. Conversely, the elder in AVP had very long dreds, but the elder in P2 did not.... so who knows, really?

It would appear that the long dred look has been a more modern concept, introduced in AVP. Even the so-called "classic" predator in Predators had longer AVP-like dreds. However, the "classic" preds of P1 and P2 seem to follow the shorter dred look.
Last edited: Oct 7, 2015

By far the weakest part of my outfit now are the shin greaves and the boots. I have GOT to design some new greaves, and also try to find a way to make some predator feet on my own, as all of the available latex feet are HUUUUGE.