SO i created a dark knight cowl made out of latex that i want to foam. I am using two part soft polyfoam that expands. I hit a bump in the road though.

The cowl is sculpted in two parts. First is the top and second is the neckring which overlaps about an inch or two around the neck the side of the head and the back. I am attempting to foam the cowl by inserting the lifecast back in the mold after the latex is cast just like i would if i were foaming a pred head. I planned to remove the back half of the mold, insert the life cast quickly after pouring the foam and then closing the mold the foam could expand.I cant cut the back of the head cause that would ruin the mask. the neck hole is actually large because it is at an angle and it ends at the middle of the back of the head.(SEE PICTURE) the mask only needs to be strethed a little in order to fit the head in.

the dotted red line show where this part of the mask ends.

the green is kinda how the lifecast fits inside the mask. 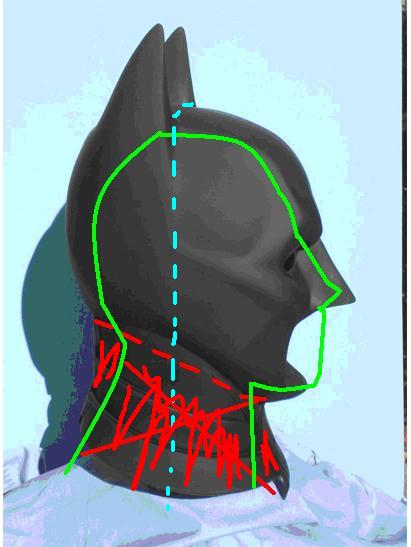 I have tried three times to get the process right but i cant seem to nail it. First time the latex shrunk before i could foam it. The mask was too far from the mold walls and foaming the mask would result in uneven bumps and deformities because the mold could not guide the foam.

the second i demolded the back half prematurely and just one part of the mask became deformed.

the third time it dried but when i was putting the life cast back in, the protective wax and lacquer coating grabbed the latex and tore it. I think the latex was too thin.

I am using BAT BLACK latex from monstermakers and it dries significantly faster than normal latex but it seems like it shrinks faster as well.

Here were my ideas to fix this:

I thought about pressing cheese cloth into the back of the gelling latex to add strength and from preventing fast shrinkage but it didnt allow for any stretching.

I thought about putting a lubricant around the neck of the latex so the lifecast would just slide in, but that might prevent the foam from sticking to the latex.

I also want to try making the latex thicker but it i think it will shrink before the second layer dries. This stuff dries fast!


What should i do? If i stretch the latex too much it rips. If i wait too long it shrinks. If i get anxious and take it off soon it isnt dry enough. Any ideas?

Is the mould in to halves? can't you paint latex in to the separate sides then add foam and quickly add the core then clamp everything together? sure you'll have a slight seam but it'll be an easy fix with a dremmel and a bullit tip with some solvent,

Hey thats not a bad idea. Ill give that a try.