RPF PREMIUM MEMBER
In a few days I'm making the long drive to Salt Lake City to attend FanX, which I've heard good thing about, but never been.

If anyone here is attending this is what I'll look like each day.

My choices were due to the scheduling: 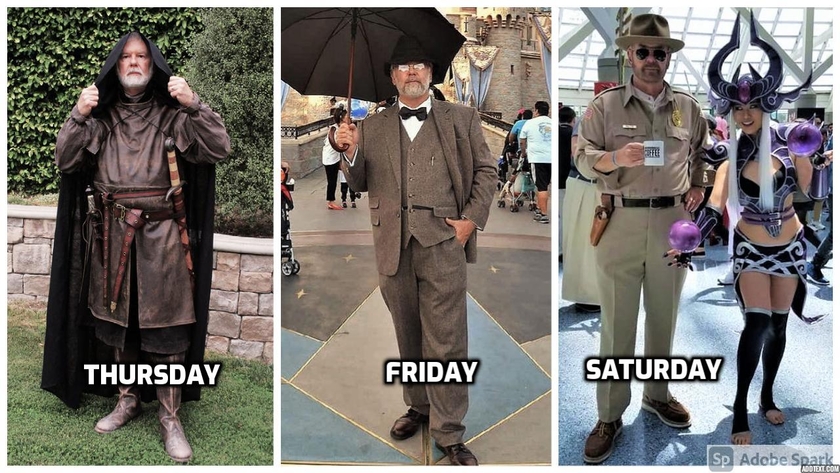 I will be there as well! Anybody else going this year?

I’ll be going on Saturday.

For you have been to FanX before, I'm wondering about something:

Each day begins with a "registration" period and there's a large area set aside as the "wrist band queue".

They shipped the wrist band to me, I registered it online, and I added my 3-day pass to it.

How can my wristband become any more "registered" than it already is?

UPDATE: I went to the "wrist band queue" early Thursday just to inquire about the process. The guy asked if I had my wristband and I said I had it back in my hotel room across the street, I could go get it right away. He told me to take my existing wristband to a certain booth and have it exchanged for a new wristband. I said something like "I wonder why they mail you wristbands then".

When I came back with my wristband I asked the same guy which booth to go to to exchange it, he said since I already have a wristband I can go right in. (????)

I did hear from various people that due to it having been a while since the last FanX that the people running the event had to fly by the seat of their pants somewhat, to remember how they used to do things, and sometimes come up with procedures on the spot.

FanX veterans assured me that though the Vendors Hall didn't open till rather late that the "outer halls" could be entered "much earlier". I found that not to be the case, that FanX workers were only letting people in a small portion of the outer hall and wouldn't let people past that. On Thursday when I showed a Supervisor the schedule listing a meetup and panels starting at 1:30 though non-VIPs weren't allowed in till 2:00 she let me in. There were a few non-VIPs like me inside also, but I wonder how many people didn't get in.
Last edited: Sep 18, 2021