Fallout Nuka Cola Bottle Caps
After drinking a few Angry Orchard ciders, I thought that the bottle caps would make a good base for making some Nuka Cola caps.
I saved what caps I could from the case. Funny enough, it was from a case of cider that I brought to a hotel during a local convention.


Trying to be really cheap on these caps, I got a little creative.
I got out my old model painting sets, and put some red paint on the caps over the Angry Orchard text, and let that dry for a couple days.
I have a silver gray metallic sharpie that I've used on some other props, and I thought I could pass it off here, but it ended up being way too dull for this delicate work.
So, I got out a correction fluid pen, thinking that since it was at least white, it might work. However it's really for paper, and not painted surfaces. The first two attempts were rough, looked terrible, and this pen was old, so I ripped it open, then tried to use the correction fluid straight, however it proved to be way too thin.

After those attempts, I went back to my model kits, and prepared the white paint. I had to cut down one of my paintbrushes severely to try to get it small enough to do the detail and it was still too thick for hand work. But after hand painting a few caps, I started to get better at it. I haven't painted in years. Still, these tools are too thick for such delicate work. But for the sake of background props, and small trinkets, it's something.

I did a search looking for a finer tool that I could use, and I ended up back at the sharpie option.
The 'Sharpie Extra Fine Point Poster Paint Marker-White' to be exact. Does anyone have experience with this? Would it be the right tool for the job?
With the "extra fine" tip, it might be right for this delicate logo, right?
By the time I get this shipped to me, it'll be about $14, which really ups the cost of a bunch of bottlecaps.

THIRD ROW, FOURTH ROW: A few of the bottle caps that I painted, better and worse.

RPF PREMIUM MEMBER
I had my Nuka caps printed at BottleMark. Had them print the white logo on a red cap. I'm afraid I don't have the skill to hand paint such a small set of letters. They are easy to afford, too, at fourteen cents a cap (with no required bulk amount, you could buy five caps if you wanted to).

RPF PREMIUM MEMBER
I may have to try BottleMark.

For anyone wanting it, I made a vector art version of the Nuka Cola logo. You can open it in Inkscape and scale to whatever size you need.


Edit:
Here is a 600DPI: transparent PNG which should work well with red caps from BottleMark.

Edit 2:
This artwork is released under Creative Commons CC BY-NC-SA 4.0 (In other words don't use it to make and sell caps on Etsy and eBay!)
Last edited: Jan 24, 2016

RPF PREMIUM MEMBER
Yeah, they do good work at BottleMark. Great product, fast shipping. I had them do Sunset bottlecaps too, and they turned out just as great. I'd recommend them to anybody.

Same. I placed an order yesterday and they shipped in under 4 hours. Thanks for the tip on Bottlemark and the logo!

RPF PREMIUM MEMBER
Thanks, GhostMinion, for the referral to Bottlemark.

Thanks, zapwizard, for the .png.

RPF PREMIUM MEMBER
I ordered 50 caps. $13.50 shipped is a steal. I plan on trying a few different methods to age them.

RPF PREMIUM MEMBER
They arrived already! They turned out great. I am setting some aside to keep presine. Can anyone think of a good method to crimp these so they look like they were removed from a bottle? I am thinking perhaps I can use two pipes, one as an anvil and the other as a hammer. 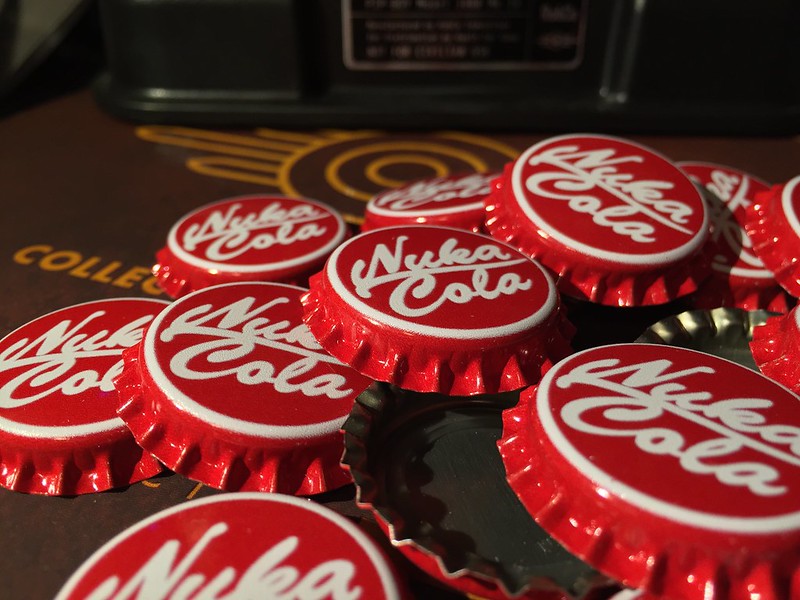 looks like I need to place an order for these caps, thanks fellas! 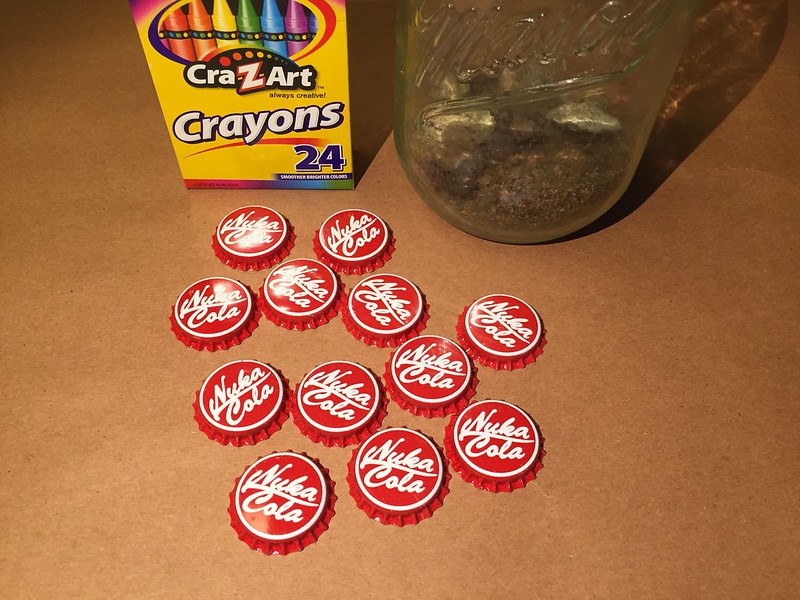 Okay, I couldn't wait to try aging these things. So I came up with a technique I'll call the "Grabbed random crap and threw it in a jar" technique.
I started with a dozen of the caps which already had a scratch or other damage. 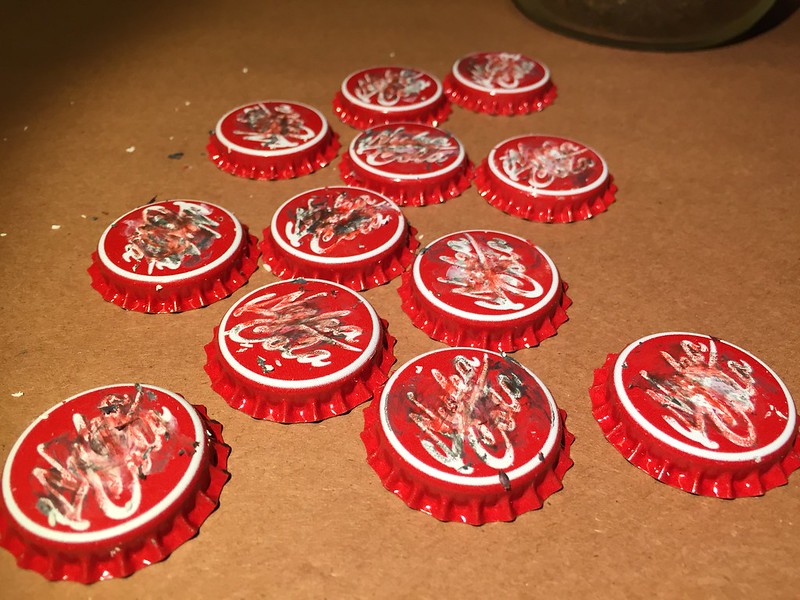 I wanted the Nuka Cola text to remain legible. So I came up with a way to protect the text, and add a bit of a faux patina. I coated the text with a layer of wax by using Crayons. 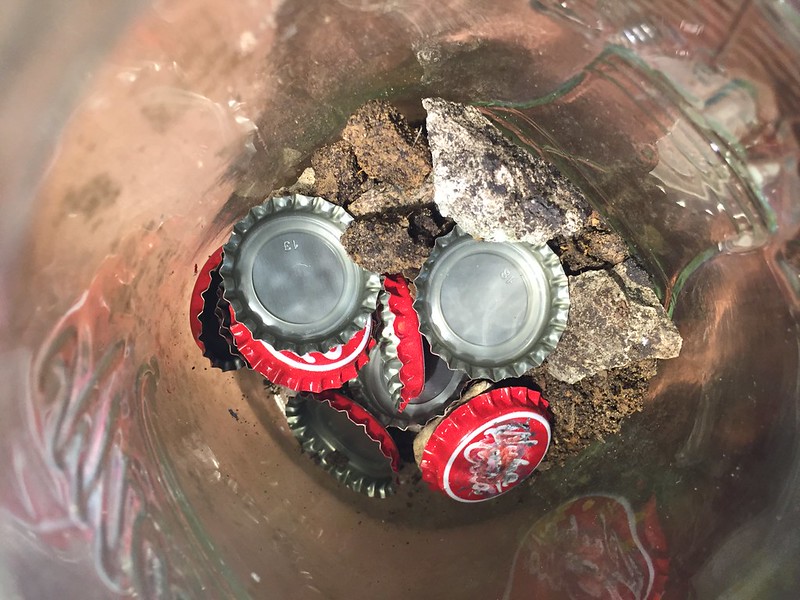 I then took a large mason jar and filled it with dirt and rocks. At first I just used rocks and dirt, but soon found the dirt was actually protecting the surface. So a few minutes later I changed the mixture to rocks, screws and bits of sandpaper. 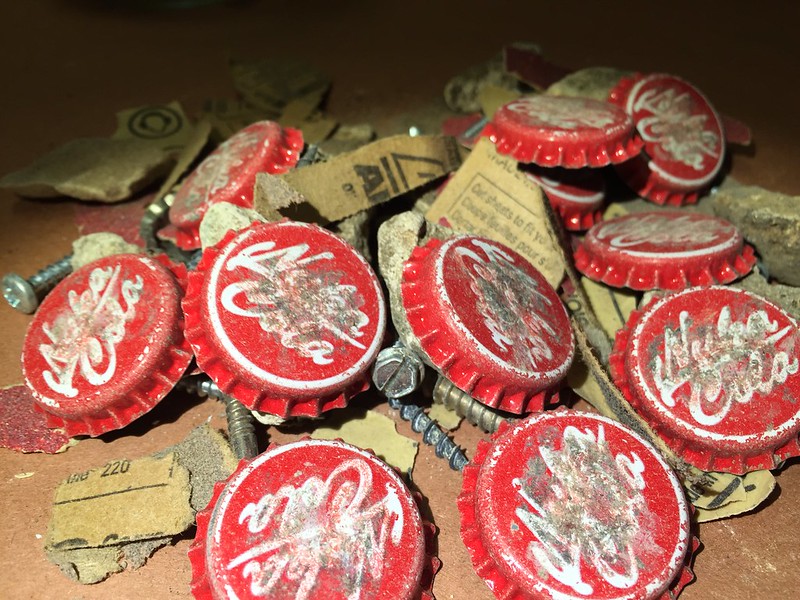 After about 15 minutes of randomly shaking, spinning and tumbling the mason jar, the caps came out with a good amount of scratches. However most of the faux patina wiped right off, leaving a shiny surface. The wax however was a total success, keeping all of the Nuka Cola logos mostly damage free. 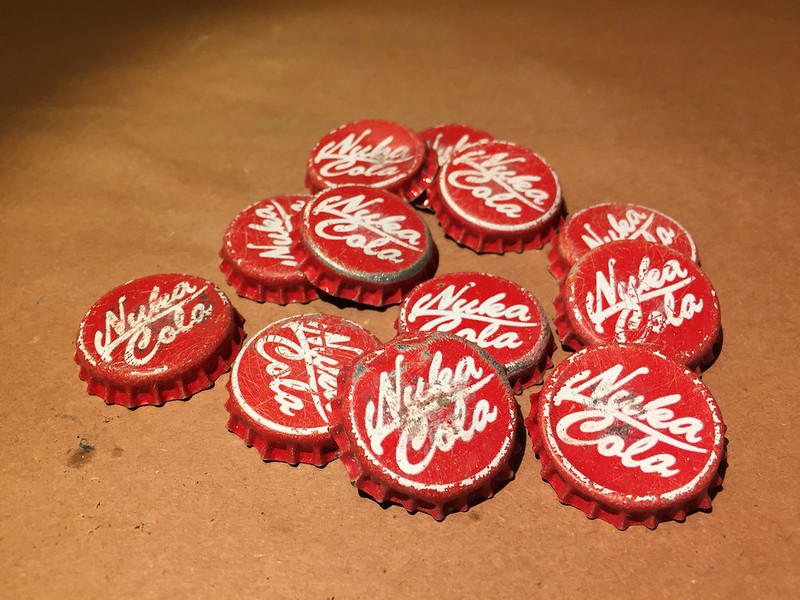 I then used a wire brush to "clean" the surface, but also to remove the shine from most of the surface. I used sandpaper to selectively remove the paint from the edges. Finally, I used a pair of pliers to bend all the edges in as if the caps had been attached to a bottle. A few of them were also smashed, or dented randomly. 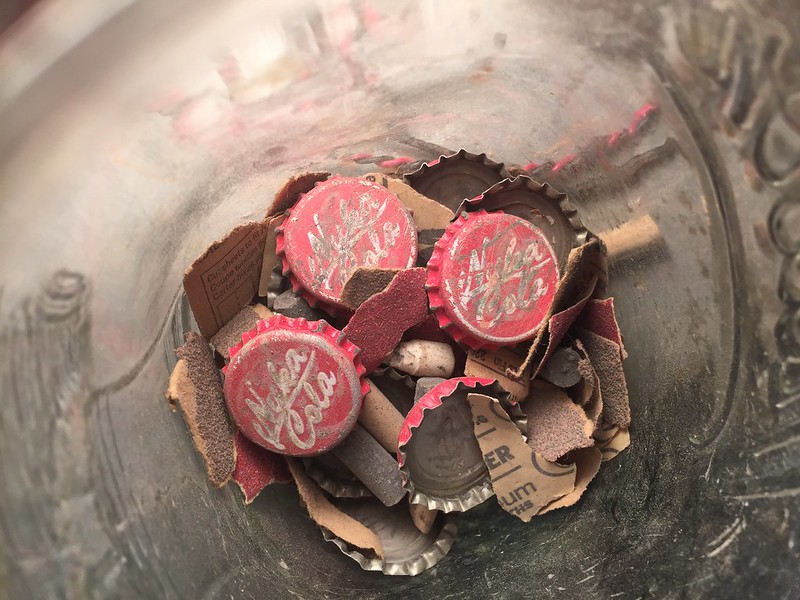 After this the caps were still a bit too shiny around the edges. The crayons did such a nice job putting down a patina that I decided to put the caps through a final round in the jar. This time I broke up the black, brown, red, white, and tan crayons into bits and threw them in the jar. 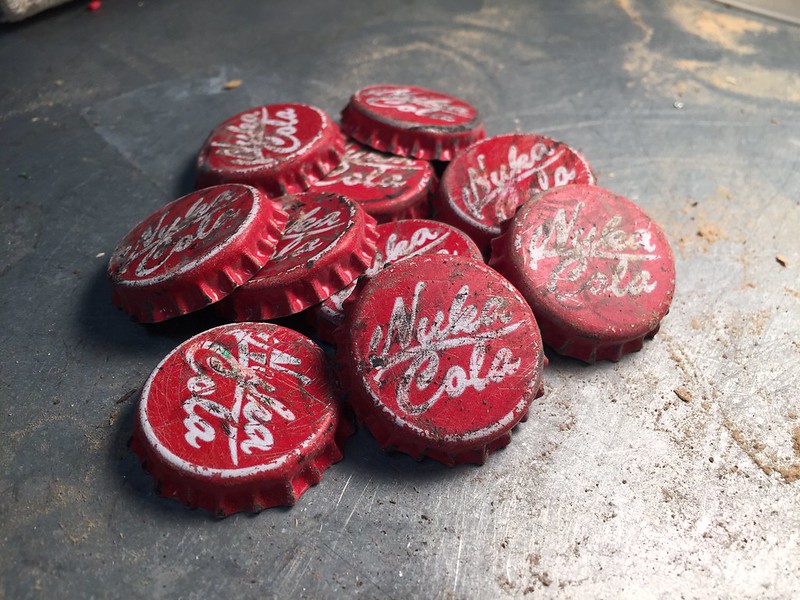 After another five minutes in the jar the caps came out looking great, with lots of random "dirt" stuck to them. I then selectively" cleaned" up areas and left others caked with wax using my fingers and a wire brush. 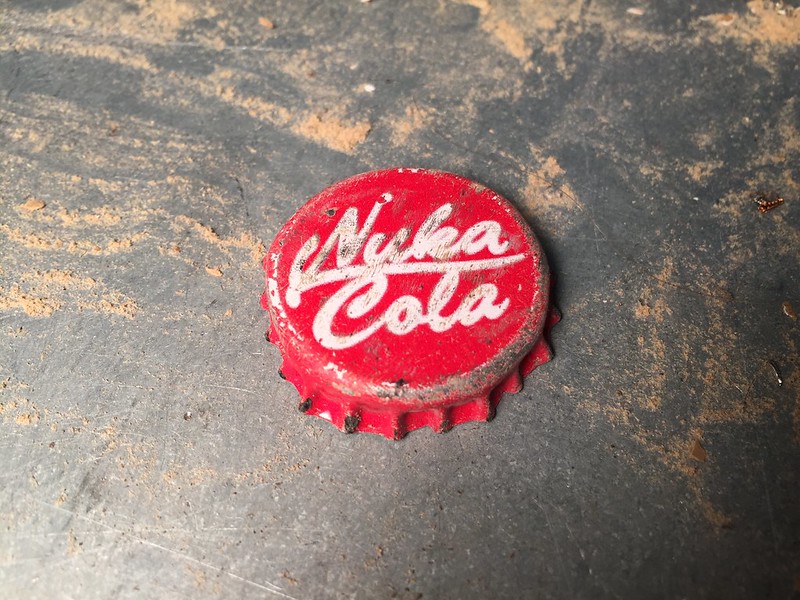 Closeup of my favorite from the batch.

zapwizard, Nicely done. I used your method, minus the wax and added a bit of paint layering to see what they looked like. Got some varying results but for a first try they aren't too bad. I'm going to experiment a bit more since I have 50 left!

I do feel like they needs a 'caps stash' now though

RPF PREMIUM MEMBER
Those look great, you have a bit more dirt stuck in the edges than I got. I was thinking of making a mentats case to hold them.

RPF PREMIUM MEMBER
@zapwizard The weathering on your caps looks fantastic. Thanks for documenting your progress. I'll try this out once my caps arrive.

I think 000 or 0000 steel wool will knock the shine off these w/out removing the logo. I will give it a shot.

RPF PREMIUM MEMBER
I have been able to find exactly 1 reference picture of any reasonable quality, online, for a caps stash.

Any ideas on what we're looking at here?

My first impression was that the top was transparent. As I stared at my monitor, though, it looks like a random pattern on the surface of the tin.
Sprocket I liked your idea about the caps stash. I'm putting a few together for a couple friends who are Fallout nuts.
Last edited by a moderator: Nov 8, 2018

That's the same thing I've been staring at all week. I think Emma is right, the one part at the bottom does look like leaves. I was going to start with an altoids tin and see where it takes me.

RPF PREMIUM MEMBER
Here is my plan, I don't know when I will get time to do it.

-Start with an Altoids tin.
-Paint it with a base coat to simulate the rusty brown.
-Cut out a inverted leaf template.
-Using the template, spray the green paint through the template to make a pattern of leafs over the brown.
-Tumble and age the surface similar to the caps.
-Cutout a piece of sandpaper to use as the label. (It perhaps is cardboard, but the texture looks more like heavy grit sand paper)
-Sharpy for the text
-Then tape it up

Also while looking for images I found this motherload of Fallout props:
http://l1b3rtyprime.tumblr.com/

RPF PREMIUM MEMBER
I think Emma is right on with the leaf pattern, too.

I got some tins of Amazon, because I needed a couple and these came in an 8 pack, and had good reviews
zapwizard The label is totally sandpaper! I was thinking, "Red construction paper?" Sandpaper is right.

I watched a couple videos on tin etching. I think that etching the leaves in would look cool, and then provide a tooth for weathering effects. The easiest tutorial I found was here. Note, that you don't have to use wax as a resist. I'm thinking Sharpie, as indelible ink functions as a resist.