RPF PREMIUM MEMBER
Let me start by saying if this topic proves to be to volitile for some I will promptly ask the mods to delete the thread. And if for any reason the staff feels this subject is innapropriate for the RPF I certainly have no qualms if they decide to nuke it. So long as we treat this as mature adults this could prove to be an interesting thread.

I'm 44 years old. I was watching Sesame Street before I could speak english (I believe it's SS that taught me much of my english when I came over from Puerto Rico when I was five). I love Ernie and Bert. I thought they were hysterical! Ernie always getting the best of Bert because he was so uptight! :lol
As an adult I've heard idiots claim that Ernie and bert were gay! I wish I had a dollar for every time I had to tell someone what an idiot they were for saying such a thing. I mean, SERIOUSLY??? THEY'RE MUPPETS! So the characters are best friends and roommates. Soley based on that they're gay?! The very idea is laughable! I've had gay people yell, scream and get red faced because I'm "blind" and "refuse to accept them for what they are"!

It's a children's show. Such a topic shouldn't even be brought up on this program! Now I hear that gay activists are pushing to get a petition signed so that the Workshop will HAVE to openly admit that they are gay. Because they are best friends and roommates??? This is by no means gay bashing but could someone PLEASE explain WHY they are pushing such nonsense?

I believe they are pushing for bert and ernie who are childrens characters to be gay..............
I actually better just leave it at it's nonsense as well.

Anyone who insists that is projecting their own beliefs on the characters.

Most of B&E's early 'schtick' was taken from old vaudeville style two man acts like Abbot and Costello.

Fun Fact: They were named for the cop and cab driver in Frank Capra's: It's a Wonderful Life.

RPF PREMIUM MEMBER
If Bert and Ernie are automatically gay lovers because they're roommates who share a bed, what does that say about Charlie Bucket's family?

They don't actually share a bed - they each have their own. The rumors started when Sesame Street Workshop considered for a time announcing that they were, I think. I forget who it was, but some comedian at the time lamented that we had nothing better to do than "worry about the sexuality of felt!" :lol Sounds like Lewis Black.

You have to wonder though - if they have separate beds, why should Bert care so much about cookie crumbs in Ernie's bed?

Been made fun of for a number of years.

I also get tired of the "guys can't be close friends and comrades anymore without being gay". But the worst about it aren't the gay guys, it's the fujoshi.

westies 14 said:
You have to wonder though - if they have separate beds, why should Bert care so much about cookie crumbs in Ernie's bed?
Click to expand...


Food attracts vermin. Haven't you heard? Bed bugs are the latest plauge! Hell! Ernie even cared for a family of twiddebugs in the flower box outside his window. 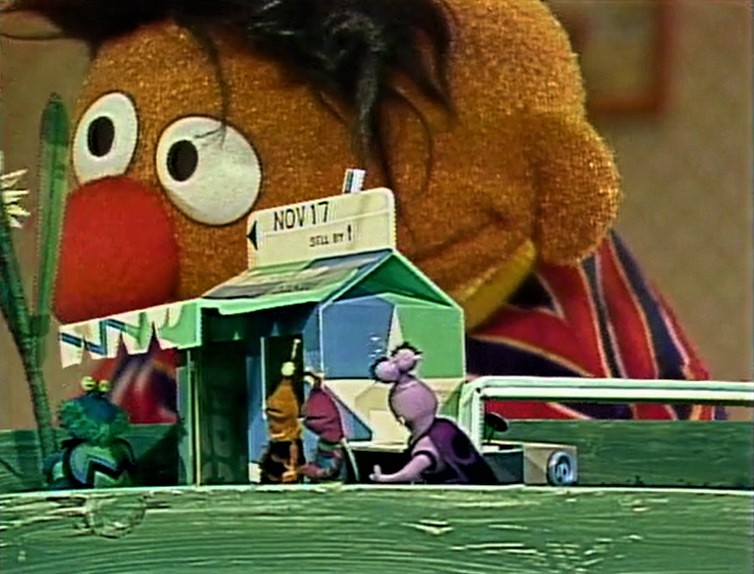 westies 14 said:
You have to wonder though - if they have separate beds, why should Bert care so much about cookie crumbs in Ernie's bed?
Click to expand...

Because that's how you get ants.:lol

The show's not nearly as good as it was. I cant imagine the workshop would ever admit them being gay, even if they WERE in the minds of the designers. Heck, Snuffy couldnt be imaginary anymore and Cookie Monster can't even eat cookies all the time.

My best friend in the world is a gay man, and I can tell you the least of his worries in life is the sexuality of some muppets being made public. Nor would he sign such a stupid petition. Some people just want attention and to stir pots, regardless of their sexuality. There are whackos of every religion, sex, creed, and preference.

I'm sure they are stored in a closet/trunk so who cares if they ever come out, they'll just have to go back in after the show's over anyways.

Funky Jedi said:
It's a children's show. Such a topic shouldn't even be brought up on this program! Now I hear that gay activists are pushing to get a petition signed so that the Workshop will HAVE to openly admit that they are gay. Because they are best friends and roommates??? This is by no means gay bashing but could someone PLEASE explain WHY they are pushing such nonsense?
Click to expand...

Sesame Street is a children's show about learning in all aspects of life. While the specific demographic is certainly too young to feel, understand, and express romantic/sexual attraction toward another person, instilling certain beliefs and/or misconceptions regarding what is okay and what is not okay definitely starts at an early age for any child. It doesn't matter one single bit that they are foam puppets; the characters Sesame Street created are role models for young children. If Sesame Street role models are telling kids that it's okay to be homosexual or that it's okay for others to be homosexual, then those kids will have one less reason to think otherwise as they grow older. It's not a matter of telling the kids to be homosexual or heterosexual or anything - it's about learning to be open-minded and learning to understand and accept different and unique aspects of others lives. What is morally wrong with that? As I see it, the opposite would be attempting to instill hatred toward others. Sure they could just leave the issue out entirely and not promote good will at all, but then, why have Sesame Street to begin with?

The only people that would be really upset about that would be homophobes in one form or another, as it would go against their own means of instilling what is okay/not okay in their own children. In my opinion, if you're posting your disgust for this on the RPF, you're basically taking a stance against potential members of this very forum, and this forum is about prop building, not expressing disdain for others' private lives. Frankly, I don't think this thread should exist on the RPF.

It is a bit like wondering why they always have such a racially diverse group of kids on the set.

torsoboy said:
Frankly, I don't think this thread should exist on the RPF.
Click to expand...


Wow. For someone who feels this thread shouldn't exist on the RPF, you sure had a whole hell of a lot to say on the matter! :lol

RPF PREMIUM MEMBER
I believe it had to be said. So sue me.

RPF PREMIUM MEMBER
So should Mr. Snuffleupagus's invisibility to adults have been retained?

After all, the show does cover learning in all aspects of life, right?

They sleep in separate beds. Not gay.

torsoboy said:
I believe it had to be said. So sue me.
Click to expand...


Don't get me wrong. I am not one bit upset with your opinion. I personally don't believe in it but you do. I respect that.

But to say the thread shouldn't exist after explaining your position? Well, to me that's just comical.

Bert and Ernie are puppets. They are incapable of being gay or otherwise there is no point in adding being gay to what is a childrens show. What can you possibly gain from two puppets loving each other. Same goes for a heterosexual relationship. Why? The demographic for that show does not need adult things taught to them at such an early age especially when it comes to sexual orientation....any sexual orientation. There is no need to introduce that stuff to young children it will only cause confusion. The world gets stupider every day. Keep the sexual stuff in soap operas not childrens tv shows.

RPF PREMIUM MEMBER
Well if people are going to jump on me for choosing to express my opinion toward the potentially eventual negativity this topic could spawn by picking my post apart piece by piece until all that's left are internet memes and off-topic counterpoints, I'll leave you guys to it. Have fun guys.

Noeland said:
They sleep in separate beds. Not gay.
Click to expand...

My wife and I sleep in separate beds. Not straight?

What is your favorite Alan Rickman character and/or cheese?

Former Network Executive on Star Trek (and other stuff)
2