Hello everyone. Thanks for the feedback on my desk design back in January (Enterprise Desk). I've done a lot of rethinking of the design since then, and I've come up with an almost completely redesigned desk which might suit my needs better. As with v1 this desk isn't meant to be an exact recreation of any particular set design, but it does draw inspiration from a few key designs, as well as some personalisation. It was suggested that I use the original starfleet emblem. I haven't incorporated that yet in this new desgn, still thinking that one through, but I am considering hacking the startup logo for Microsoft Windows 10 and replacing it with that emblem. Has anyone had any success doing that kind of thing? Anyway, here's my v2 design: 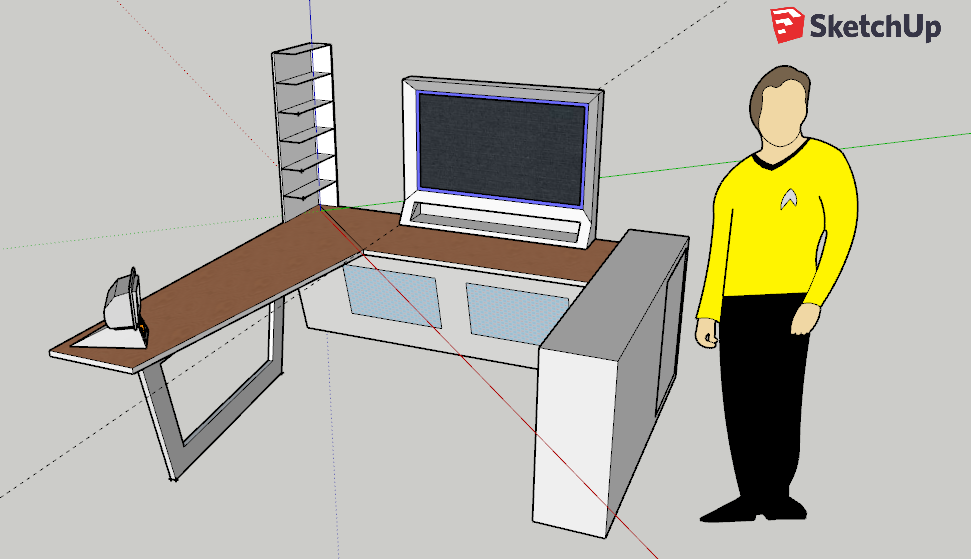 The basic concept follows design ideas from Captain Kirk's quarters. There is an angled wing on the left, aobut 2/3 of which will be underneath the window in the room the desk will be located in. In the corner I've included a shelf. The corner of the room has a pillar sticking out, so the idea is to disguise this pillar by wrapping some shelves around it. I've left the pillar and the cutouts needed to wrap around it out of these drawings, but the shelf will provide a nice small display area for my model cars, and other things. Okay, doesn't sound very much like Star Trek TOS, but the desk does have to be practical and enjoyable, and photos of the sets from various episodes do show personal collectables around the room anyway.

Against the other wall is the 'view screen' which will likely be a TV around 40-55" in size, and encased to make it blend in with the desk. Underneath I've kept a shelf area for keyboard and mouse. Underneath the desk you will notice an angled cabinet with mesh screens, this is inspired by the bridge designs. Sometimes you see Spock remove a screen and adjust computer hardware inside. My idea is to install a PVC framed rack inside onto which the PC motherboard and other hardware can be directly attached without needing a CPU case of any kind. The cabinet itself will be the case. It will provide plenty of ventilation and cooling possibilities in this hot and humid climate (Phuket). It also helps to make the whole desk look more convincing I think. 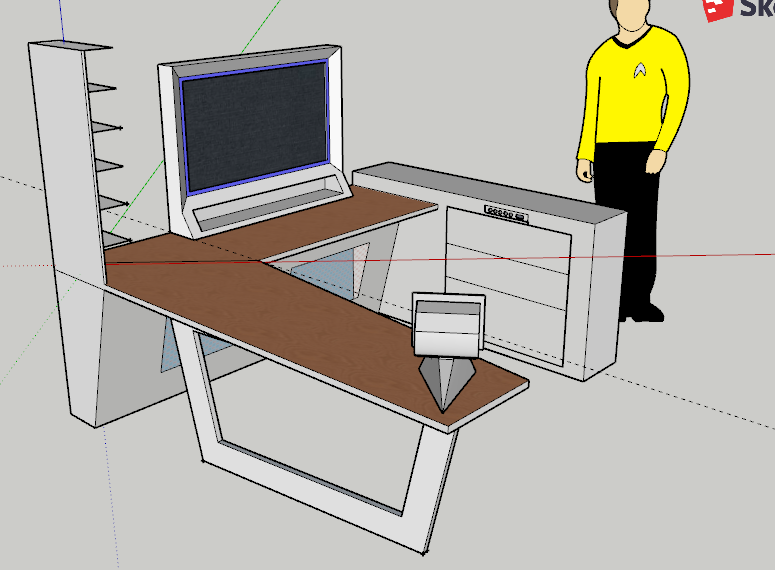 The right wing is a cabinet inspired by the one separating Kirk's office space from his sleeping area. However, instead of a single small door I'm intending to install three draws, one of which will be a slide-out tray for my printer/scanner. The push button controls shown above are not yet fixed in my mind, but I am considering using a Raspberry Pi Zero, or perhaps a BBC MicroBit, connected to those buttons, to control the opening and closing of those doors, and perhaps other things as well. The table monitor in the foreground is also a might or might not be, which might also be Raspberry Pi powered with a small LCD screen. I'm considering an idea I saw someone else do where they mounted storage cards into replica 'tapes' (you know, those squared coloured things that look nothing like tapes!) and a storage card reader in the 'tape' slot. I have some experience with Java and Python, so I'm thinking that a program running on the Pi that is looking for whatever commands saved onto each 'tape' and then displaying the appropriate response. It might be my media server, or today's weather, or Kindle app, or whatever might be useful. The original Starfleet Emblem could be displaying on the screen when it's not doing anything else. 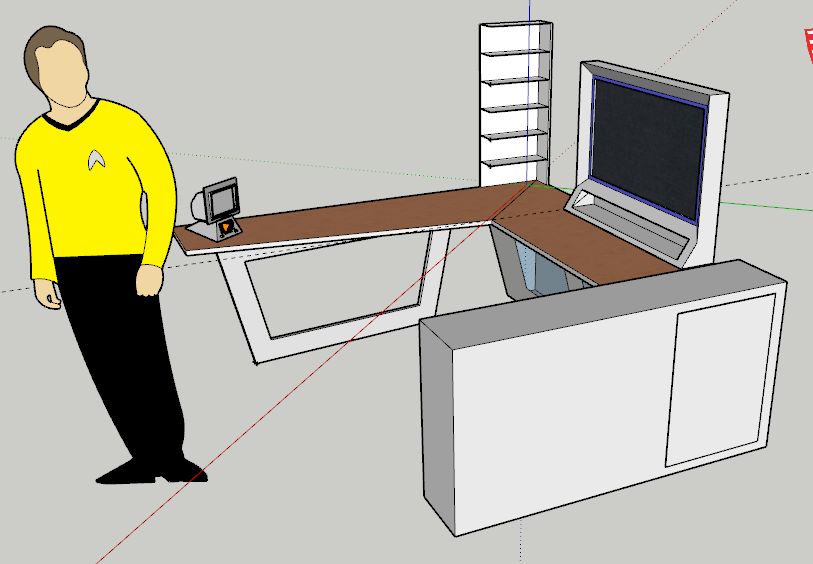 On this side of the cabinet I've included a door which could easily provide additional storage space, and perhaps controlled from the push-button controls above the draws on the other side if I choose to go in that direction. I'm also curious about the mesh dividing wall that is located over the cabinet separating the office and sleeping areas. Does anyone know how that was made? I haven't included it in my design yet, but I am interested in finding out how it is made, what it is made of...

This is intended to be more than just a desk, it's a proper workstation. I now teach progamming and game authoring fulltime, so a fully function workstation will be very helpful. I'll probably also be including a custom built NAS, internet server, etc, likely Raspberry Pi based, all of which will find plenty of space underneath.

Yes, it's eccentric, but that's good, and besides, my current desk is designed to provide the feel of a farm shed (and it's made almost entirely of recycled materials), and I enjoyed it for a long while, but it no longer meets my needs, so this is no more or less eccentric than what I already have lol! No doubt at least some of the materials will be recycled into the new workstation. 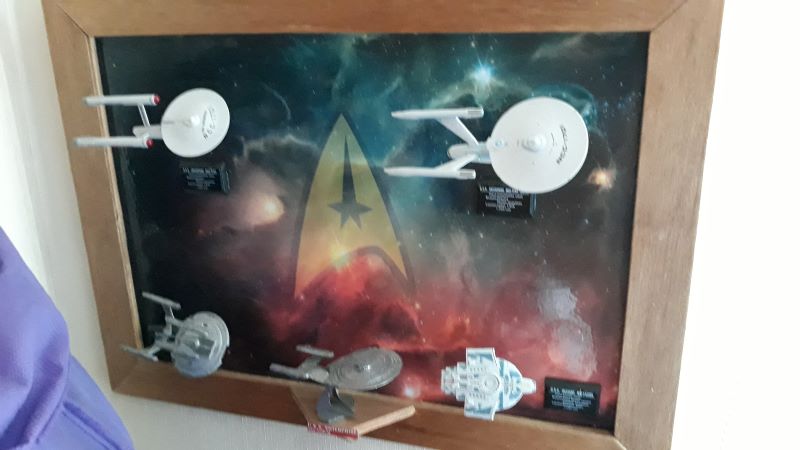 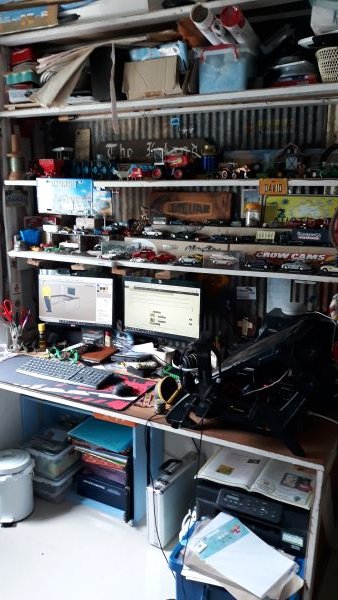 <-- I made this a few years ago. It's four models out of a set of five that were mounted on pedestals. I drilled holes for the posts to go straight into the backdrop and recut the pedestal bases to make nameplates mounted under each model. The Enterprise D is the only model missing from the set, but a friend gave me one of those Metal Earth models which I've mounted on a small shelf, just works better that way. It'll be hung over the desk somewhere...

I also have a framed page out of an old Popular Mechanics of William Shatner advertising the worlds first personal colour computer, the Commodore Vic-20. It will also be hung somewhere over or near the desk.

<--My current, and far too cluttered, desk lol. My PC currently uses an Aerocool Strike-X case which I will be selling off once the desk is built and all the hardware removed from the case.
Last edited: Jul 20, 2019

'The City on the Edge of Forever' tricorder