RPF PREMIUM MEMBER
I put together this overlay map for fun a few months back, and thought some folks here might appreciate it.

Any fan of Star Wars, Indiana Jones, The Shining, The Dark Crystal – among other iconic films – is intimately familiar with Elstree Studios, even if they don’t recognize the name. Located in Borehamwood, Hertfordshire about 30 minutes northwest of London, its nine massive stages (possibly ten towards the late 80s?) served as principal interior shooting sites for these iconic productions. The largest, stage 6, was constructed specially for Empire Strikes Back. With such prestigious credits, one might assume their survival today (albeit perhaps heavily renovated), or at the very least into the 90s.

In reality, shortly following Last Crusade’s 1988 shoot, all but the three smallest stages – along with over half of the surrounding support facilities and the largest water tank (which also featured in LC) – were demolished, to be rather unceremoniously replaced by… a grocery store and parking lot.

Curious to put in perspective the scale of what was lost and the stages’ present-day coordinates, but only finding very rough approximations online, I decided to see if I could assemble a slightly more precise representation based on contemporary studio maps and aerial photographs taken from multiple angles. Unfortunately, I failed to track down a sufficiently high-res direct overhead shot (any suggestions?), so the building footprints remain estimates for now, but they should be awfully close. As for the key to a selection of each stage’s most famed sets, these derived from sources in books and online of varying reliability, so while the designations should be reasonably accurate, it’s not outside the realm of possibility that I’ve gotten one or two mixed up.
All of this is to say: take the map as gist, not gospel.

[Though on that note, if there ever was a “holy site” of Star Wars and Indy, that unassuming expanse of pavement and grocery aisles is surely it.]

If you do notice any error, omission, or other constructive criticism – even minor/pedantic – by all means please let me know. I’d also love to hear if anyone is aware of existing blueprints for the Indy sets, particularly the Raiders Peruvian Temple (stage 4); I’ve got to figure out which parking space corresponds to the idol pedestal… 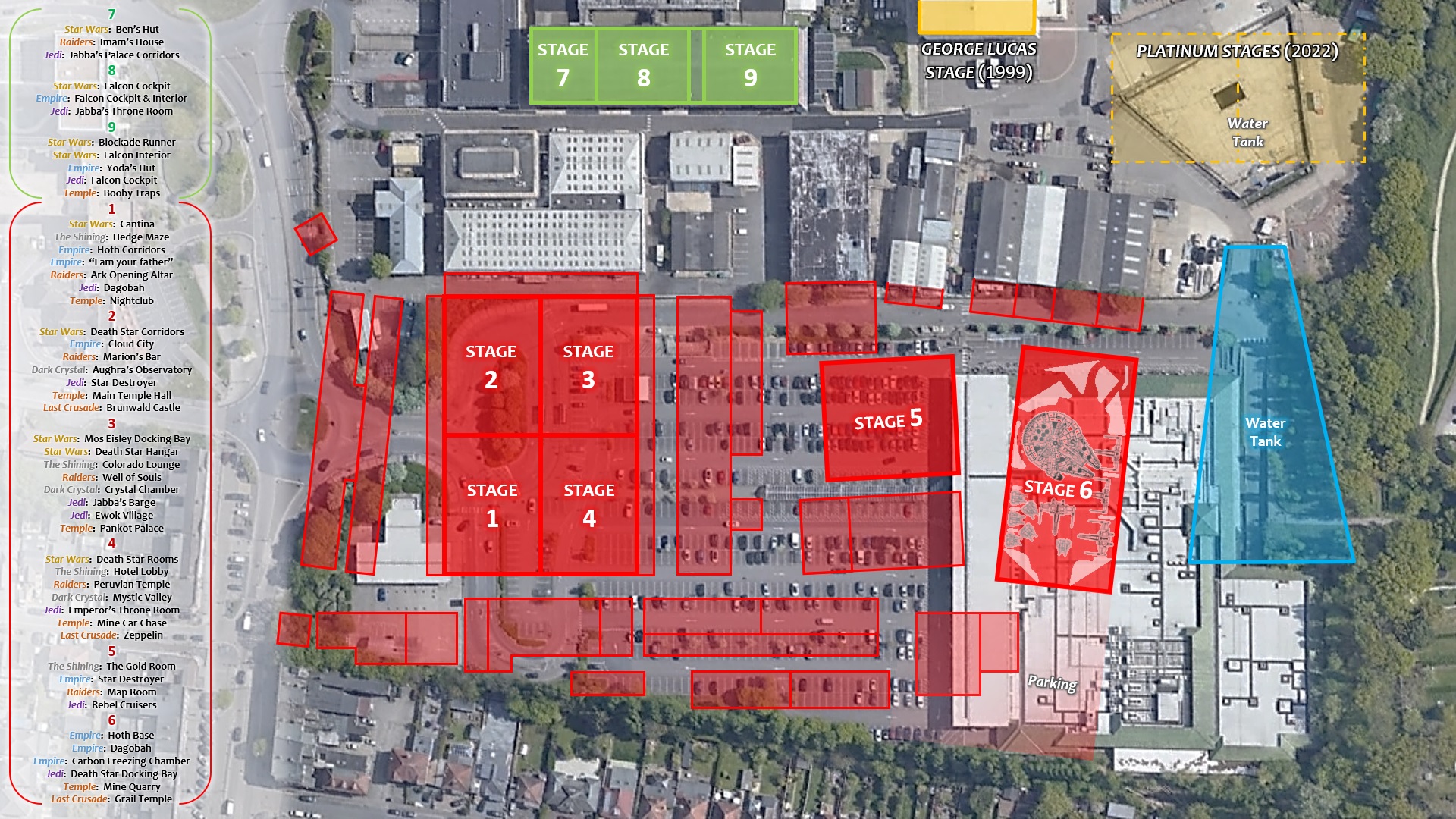 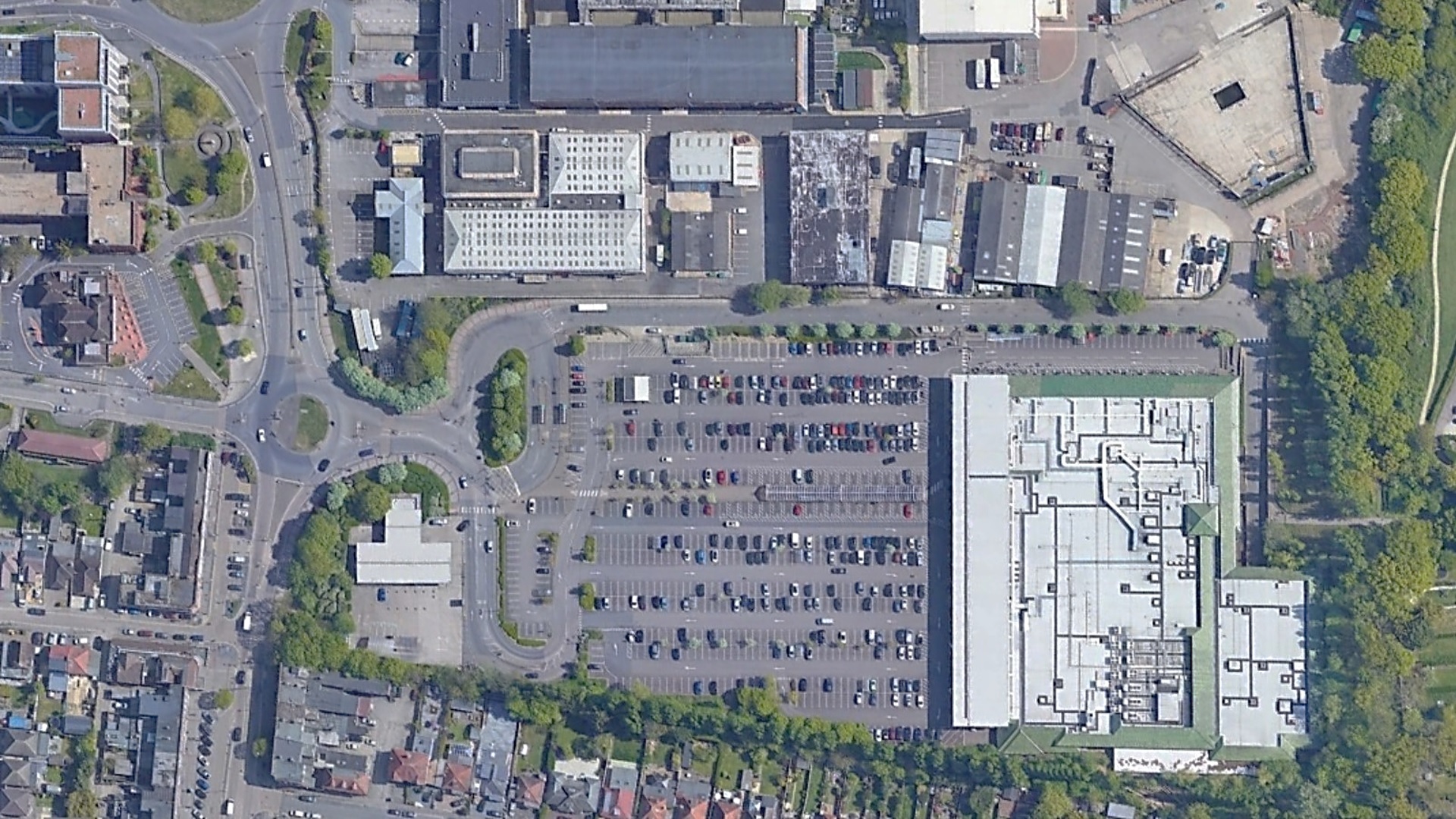 RPF PREMIUM MEMBER
You might have already seen these pics in your research, but just in case:

From the Pages of Star Wars Insider: Welcome to Lucaswood | StarWars.com

Some of the buildings are a little different, presumably due to being from older imagery. But one thing you can see for sure is the water tanks in the back.

...or a fan of the Buggles before they were annexed into Yes

So cool. In the movies and behind the scenes material, the sets for the well of souls, death star hanger, kali temple, etc appear HUGE, but in the overlay, those stages are only about 18 parking space widths long. Seems small from that perspective.

ZeroSum said:
You might have already seen these pics in your research, but just in case:
Some of the buildings are a little different, presumably due to being from older imagery. But one thing you can see for sure is the water tanks in the back.
Click to expand...

Thanks! Yes, I pored over all of those (along with a few other vantage points spanning ~ 90 degrees), but I appreciate your thoughtfulness. Elstree underwent substantial change over its history, so in attempting to represent it as close as possible to its 1988 layout, it was very much a matter of focusing on the consistent bits when using older imagery. The photo in the diagrams referencing The Shining, for instance, was taken no later than January 1979, as stage 3 suffered a catastrophic fire at that point requiring installation of a conspicuously different roof.

I’m guessing one difference you may be keying in on is the designation of a “stage 6” within the main quad-stage structure? I don’t know the full story on this, but the most logical theory I’ve come up with is that the structure started with four stages. After stage five was built, they presumably divided stage 1 in half to create a stage 6, but then following construction of stages 7-9, they must have rejoined the divided stages, since the giant “Star Wars” stage definitely became the new stage 6. Supporting this is the fact that the stage 1 roof divide disappears in later shots.

Another puzzle I’m still working on is whether there was a stage 10. I’ve only found one mention of this – in J.W. Rinzler’s The Complete Making of Indiana Jones, he writes on page 209: “On Shoot Day 17, Monday, June 5, on Stage 2, Spielberg started the castle interiors, which they finished on Wednesday, June 15, on Stage 10, appropriately burning down the set (as the story demanded).” The most likely candidate is the structure just above stage 5 in my map which appears to have been added circa 1986, but I chose to hold off on labeling it until I can find corroboration.


belloq said:
So cool. In the movies and behind the scenes material, the sets for the well of souls, death star hanger, kali temple, etc appear HUGE, but in the overlay, those stages are only about 18 parking space widths long. Seems small from that perspective.
Click to expand...

Agreed. Perhaps an aerial view somewhat negates the sense of scale contributed by those stages' considerable heights (taken full advantage of with the Well of Souls & Temple Hall), while in the case of the ANH Death Star Hangar, I believe this was partially accomplished through the addition of matte paintings. But still, I totally see your point; frankly all of those footprints feel too small at first glance.

RPF PREMIUM MEMBER
It occurred to me that there ought to be satellite imagery available now showing the completed Platinum Stages, so here's a more up-to-date set. As you'll notice if you compare against the 2020 imagery, the angle isn't exactly the same, thereby slightly altering roof positioning relative to the ground. So even if I can track down a high-res direct overhead from the 80s, my footprints will probably still be plus-or-minus a parking space. 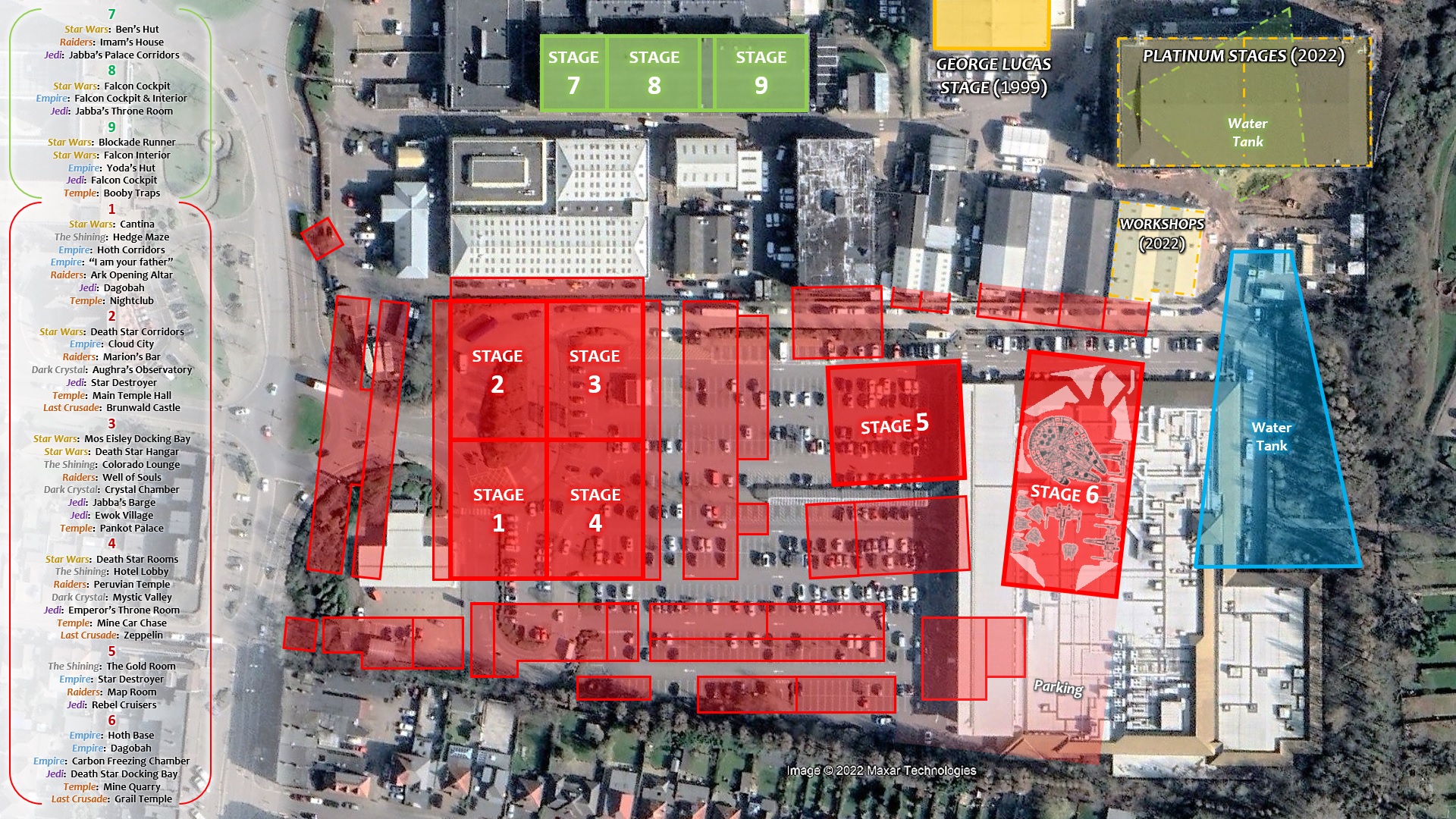 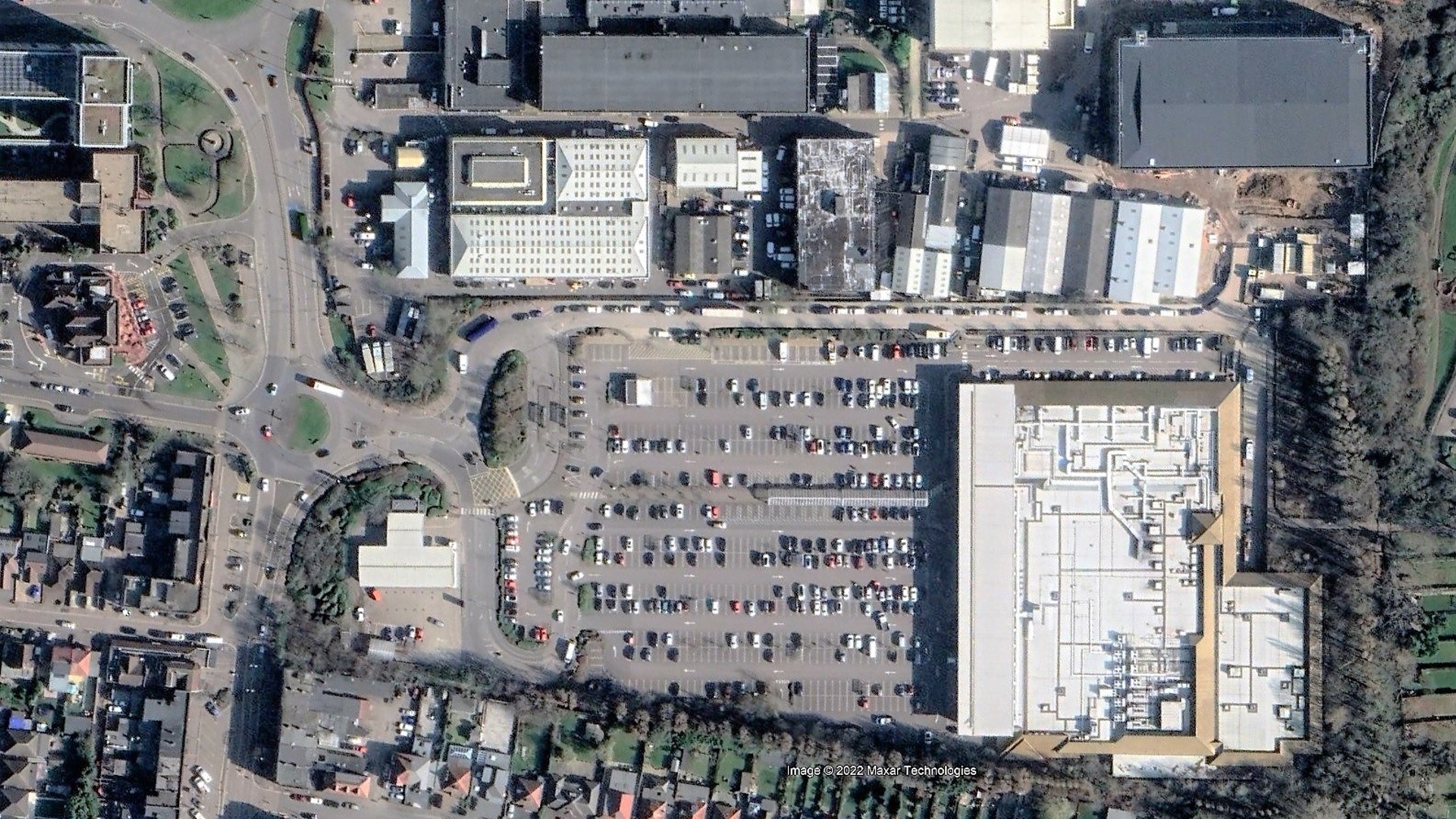 RPF PREMIUM MEMBER
This is great!

Stage 6 would also be anything else with the Falcon in it in ESB. Redress around it! Platform 327, and mynock cave. I know there's only so much room on the graphic and can't list every little thing.

Treadwell said:
This is great!

Stage 6 would also be anything else with the Falcon in it in ESB. Redress around it! Platform 327, and mynock cave. I know there's only so much room on the graphic and can't list every little thing.
Click to expand...

Thanks! Yeah, I resized the font / spacing on the key probably half a dozen times as I was making it in order to fit in more references. But I do love the idea of the Falcon sitting in the exact same spot in all three locales.

I wonder, though: Was there even any set dressing for the mynock scene? It kind of looks to me like they just shut the lights off, turned on a fog machine and called it good!

RPF PREMIUM MEMBER
pretty much! And black plastic sheet on the floor!

Does anyone remember 1978 or 1979 Star Wars Christmas parade/float?