I bought a new Pete Mander P1 mask to replace the one I sculpted myself, since I made several errors in proportion. I also want to do a more realistic, and probably more involved, paint job on this one. So, I'm going to post pictures in this thread, and I'm looking for comments along the way. In other words, don't let me screw this one up.

Here's a base coat on the new mask, along with the suit: 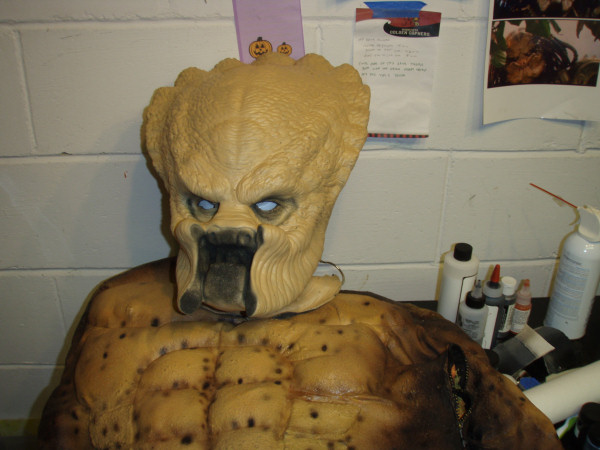 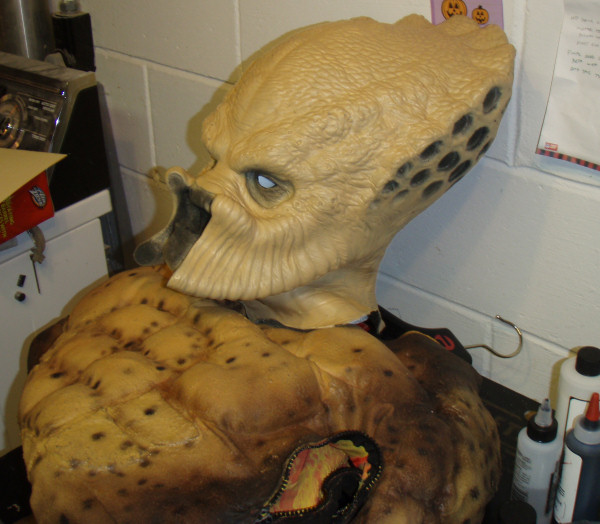 I think the base color on there is pretty close to the real Predator color from the movie, although I'm wondering if I need to make it darker and yellower to match the color on the bodysuit. I had way too much yellow in the original color scheme.

Here are a couple shots with the old mask for comparison: 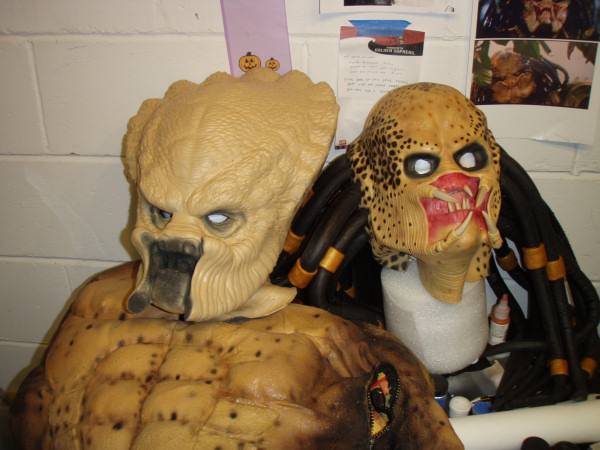 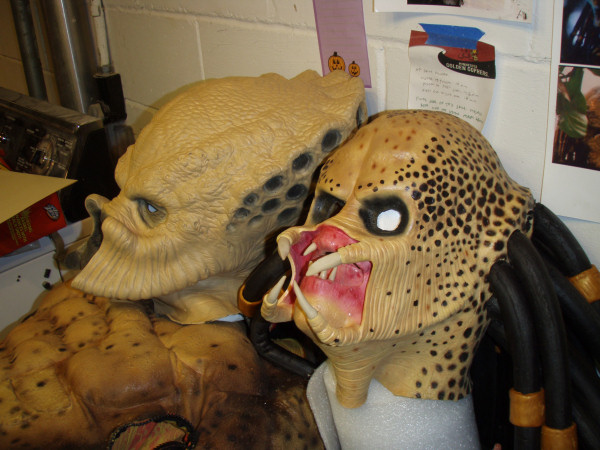 Do I need to tweak the color on that base coat at all?

Great choice on the head...can't go wrong there. As for the color, no it doesn't quite match, but you don't need to repaint it - just make your next layer of brownish paint match the body a little more. I'd also redo the spots on the body and put more on. Lots more.

good start, i agree with predatrhuntr, concentrate alot of the spots on the rib ,hip ,under pec, shoulder areas, a good refernce pic is a must...but an awesome mask

brush this on over what u have already done.also mix about 5 drops of latex into base colour with water.brush on.
C

look forward to the paint up! looks like a good start to me! are you using an airbrush?

Yep, I'm using an airbrush for this. As far as repainting the body suit goes, that probably wouldn't be such a bad idea, but I won't be able to get to that before Dragon*Con. Maybe I'll do that later.

Anyway, this evening I worked on a second layer, this time with a color named "Indian Red". (I'm not sure if that color is really supposed to represent any Native Americans in particular -- it's just what they printed on the label.) Actually, first I started to try to paint the mouth pink, but then I realized that the pink I was using wasn't hiding the dark mask latex all that well. So, I put in a white coat to hide it: 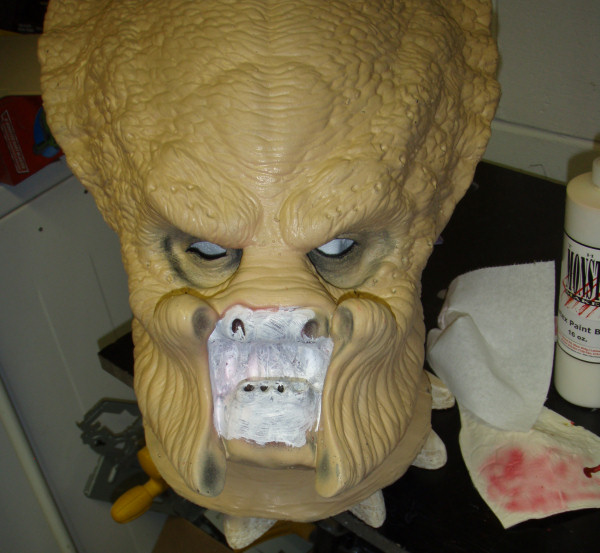 I painted the Indian Red thicker around the crown, then thinner in toward the center for sort of a gradient effect: 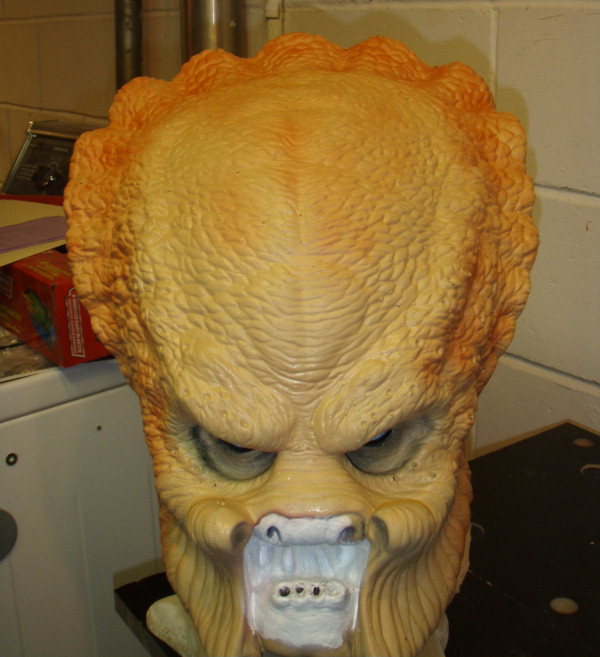 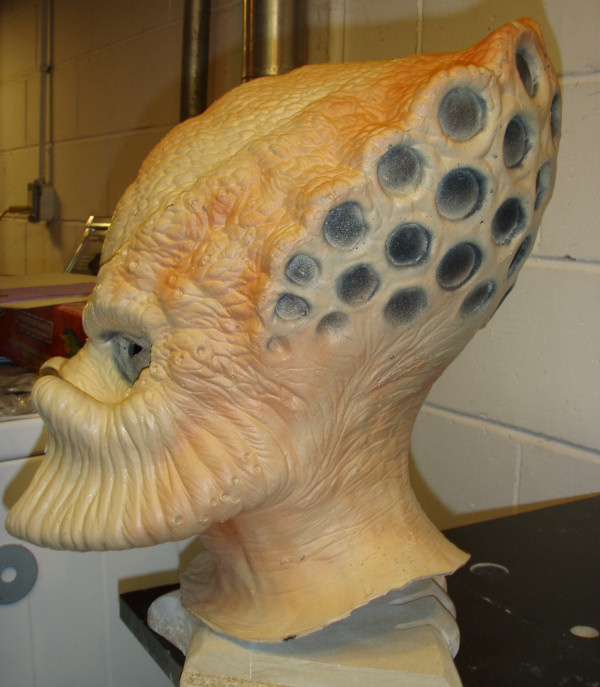 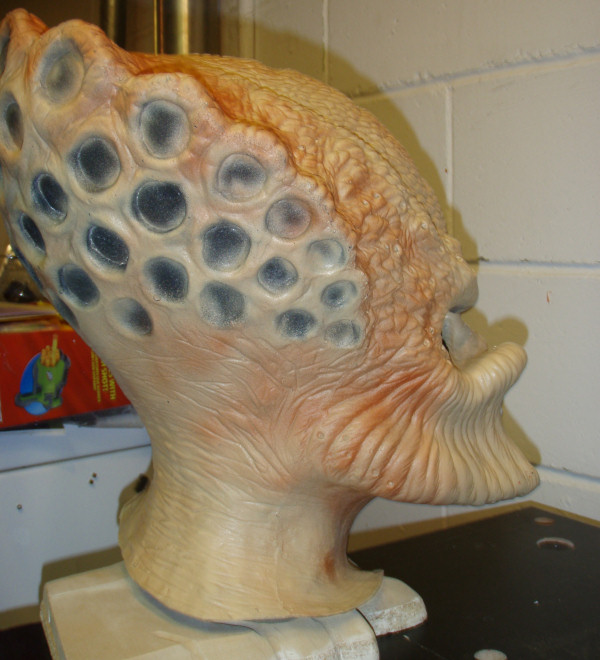 Then, I decided to start painting some more prominently defined spots in the Indian Red. Actually, I'm not sure I'm doing these completely correctly; maybe these should blend in a little more. I'll be adding more layers later -- at least one lighter brown and one darker brown layer of spots, so maybe these don't matter as much. 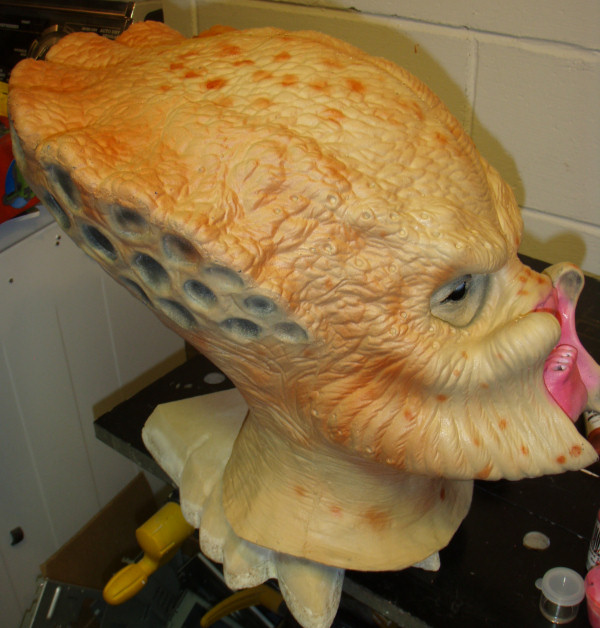 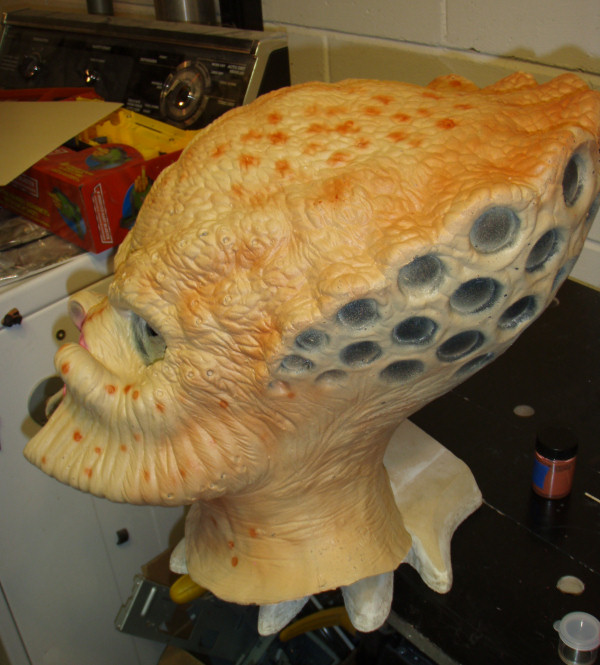 (Oh, and I think I can see that I need to pull the Indian Red down over the crown line into the first row of dreadlocks, even though I'll have a lot of dark brown spots over that.)

At this point, I decided to get to work on the inside of the mouth some more. I tried using the first pink mix that I had whipped up, but again it wasn't hiding very well. So, I mixed up some latex paint base, added a lot of white tint, and then added enough red to make it look pink. I'm not really sure I like this color for the mouth base, but it actually looks better in the picture than it does to me in person. I suppose once I blend the tan back into the mouth line some more, it'll look better. 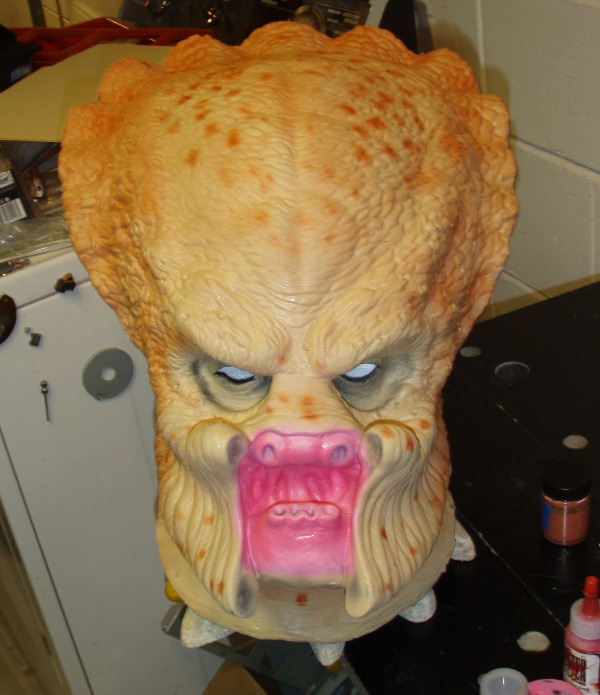 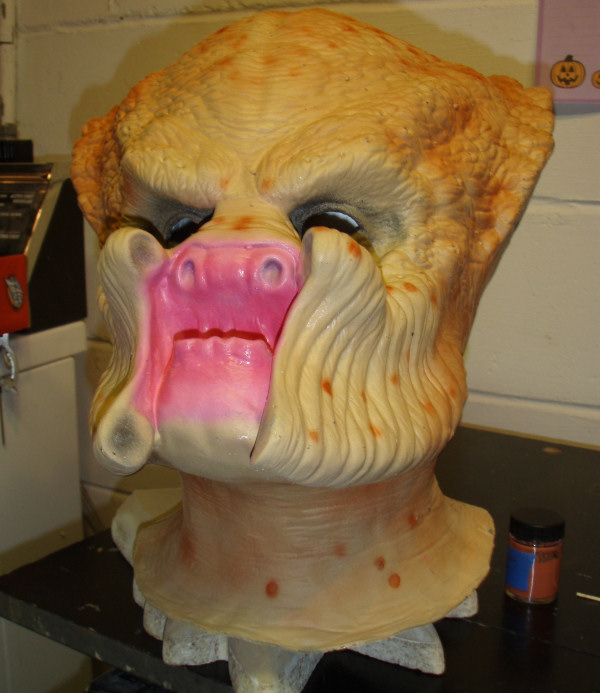 Any comments? Any suggestions? Am I doing anything blatantly wrong? Remember, I'm counting on you guys to keep me from screwing this one up.
C

I think it's going quite well! You're definitely being smart by not dumping a whole lot of color on with each step, by rather, allowing the layers to build upon themselves. My only concern is, and this is just me and my personal feeling on the matter, get a tad bit more random with the spotting. Again, maybe it's just me, but I see 'rows" versus randomness. The mouth isn't a bad start; you can always tone it down once you add the veins (Which will soften the veins, too, if that's the look you're going for with this painting) I love the thin layer approach, though. Keep up the great job!

looking good mate the pink in the mouth is a bit to bright though I would definitely tone it down just keep it up with the layers by adding more
depth and feel to it remember for more detail you have to add layers of colours are you going for a P1 feel or your own custom???

You can tone down the pink mouth by spraying on white thats been thinned quite a bit with water. If you use very little, you will still see pink, but it won't be as predominant.

As for the spots - I have an idea for you. Try to airbrush a very small spot. Try it on cardboard until you can make a very small dot without getting overspray. Then make spots that are slightly bigger. You'll find that spots on a Pred come in various shapes and sizes and if you can mimic this, you will find that your spots have a more realistic look just as you would find in nature.

You'll want to make your spots different sizes and different colors to get that random look.

I have been told never to use the colour black while painting (by one old drawing teacher). But a darker brown or blue to use instead of black, because black is not "natural" enough and should therefore only be used when necessary. So I would use a mist of dark brown on the mouth part. I have read here before by some painters, that they paint with brown in the mouth (and then white?) and the result has always looked good. If I speak rubbish, please tell me.
Good luck with the rest!

CoolleKotten said:
I have been told never to use the colour black while painting (by one old drawing teacher). But a darker brown or blue to use instead of black, because black is not "natural" enough and should therefore only be used when necessary. So I would use a mist of dark brown on the mouth part. I have read here before by some painters, that they paint with brown in the mouth (and then white?) and the result has always looked good. If I speak rubbish, please tell me.
Good luck with the rest!
Click to expand...

I agree, i always mix my brown into my black to keep it more natural. Looks good so far.

i as well try to use a dark color that matches the colors im using instead of black. i was told the same thing back in school.

Thanks for the suggestions about spot sizing and painting, PredatrHuntr. I've been trying to do that, and I think I'm getting better at it. Not perfect, but I'm making progress. My plan is to make the Indian Red spots a little more diffuse, while the dark brown and very dark brown spots will be more defined.

Anyway, here's my progress from this evening. I started by painting a little more dark red into the corners of the mouth and by blending things in a little better. I think the darker red keeps the light pink stuff at bay and gives it some depth. 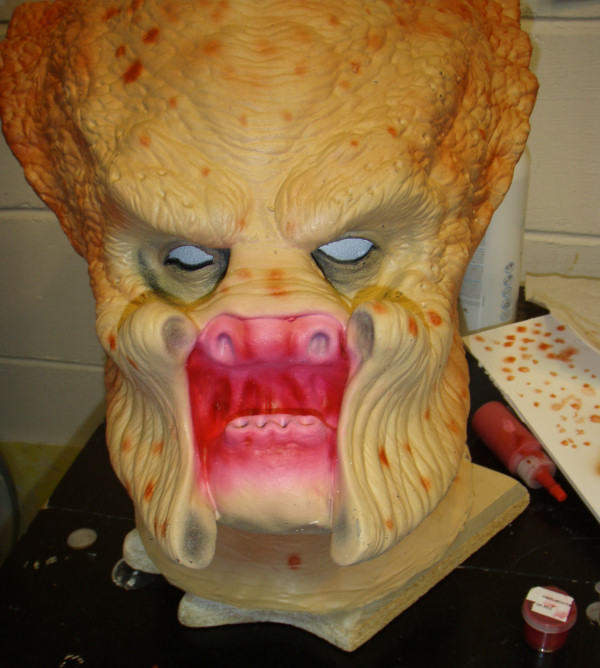 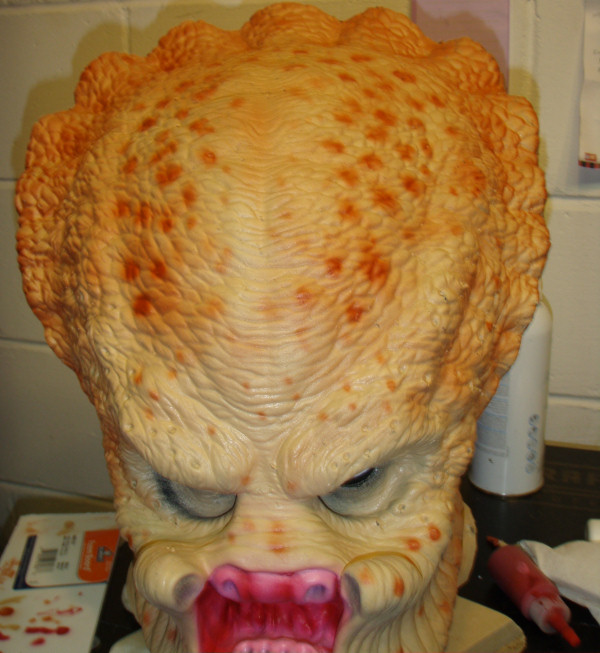 I painted just a few spots on in a sort of dull tan color, just to break up the two-color motif and add a little subtlety. Well, sort of. 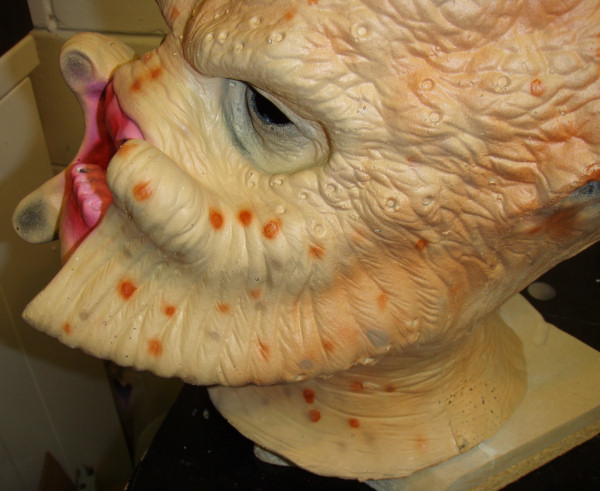 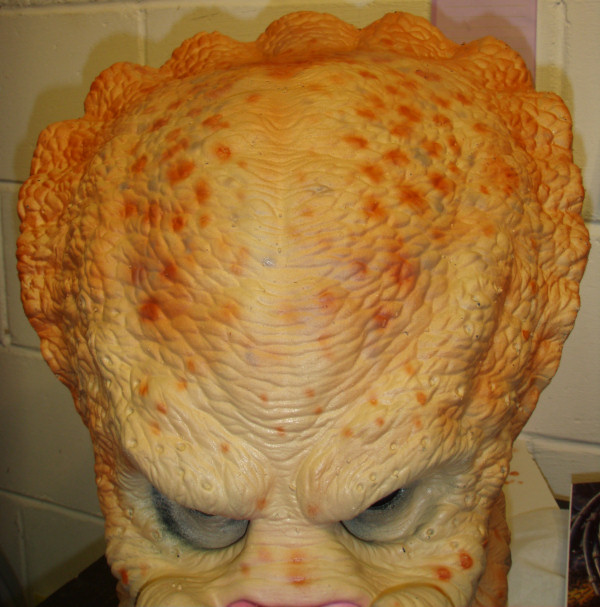 Next, I started working on the brown spots. I was kind of hesitant to get started on these, because the perfectionist in me came out. I went ahead anyway and painted large spots near the crest of the skull, then went for smaller spots as I got inward. 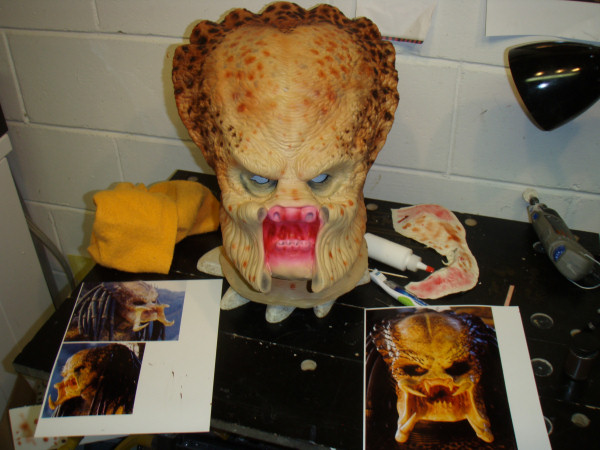 (you can see my reference material in that one) 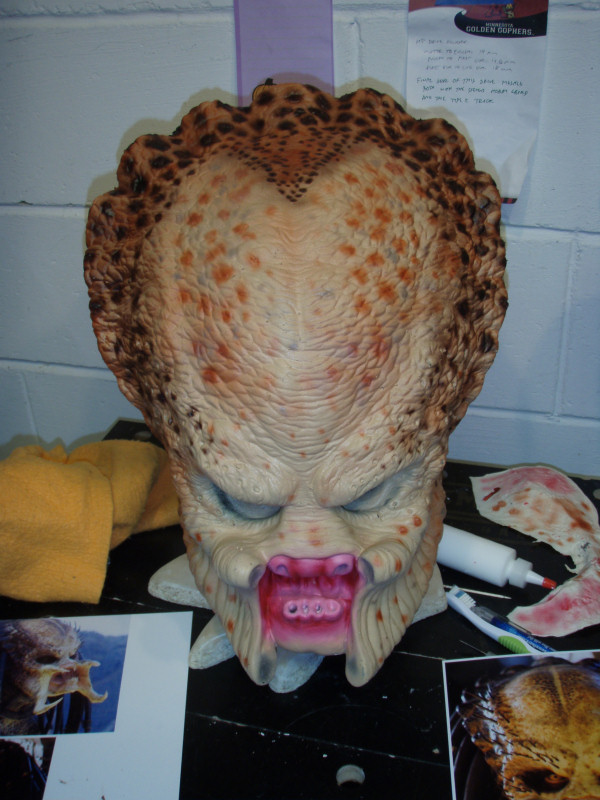 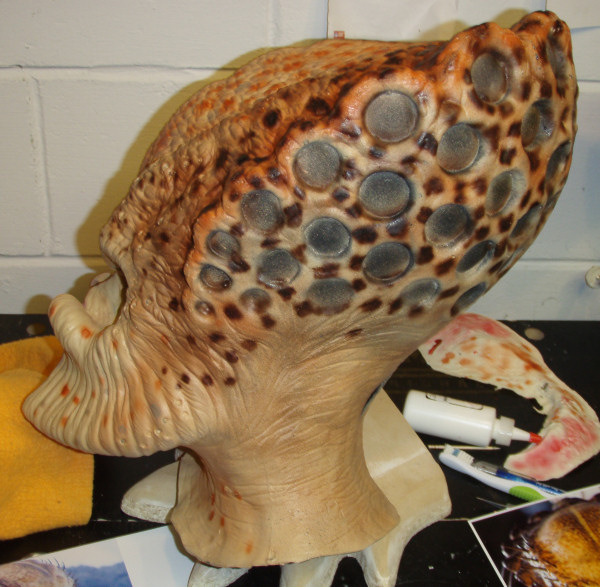 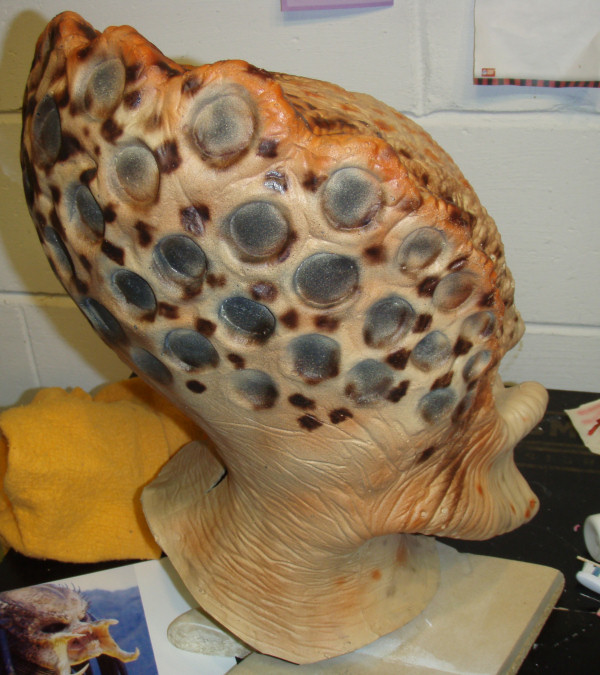 I think I probably need to add more, smaller brown spots coming in from the sides into the center of the head, just so the transition doesn't look abrupt like it does. I might also want to do something with that strip in the center. Maybe I need to extend those brown spots further down the center toward the eyes. I'm also planning to extend the dark brown spots down the back of the mask where the dreads go, although I'm undecided about where they're going to taper off as they get down toward the jawline and the neck.

As always, I welcome comments. Thanks for the advice so far.

Hey Elkman, the color is coming along really good so far! I think the widow's peak could come down a little further. Can't wait to see more man.

Not bad at all. You can add depth by repainting over your existing spots with thin almost translucent cream color and then it will look like the spots are underneath the skin. Looks like you have already done that on some of your spots? And the great thing is that you can always paint over your mistakes and start over again

The black spots on the top of the head - I would keep a space in between the middle so that the two groups don't actually touch each other. That just something that always stuck out when I look at reference pics - there is always a gap between the two sets of black spots on the widows peak, so I always make sure to follow that tradition.
You must log in or register to reply here.
Share:
Facebook Twitter Reddit Pinterest Tumblr WhatsApp Email Link
Top