It's been a while since I posted on here, but I have been planning out a new project and wanted to get some help. I recently re read The Walking Dead comics and I remembered how much I loved them and wanted to do a display/art piece with some of my favorite items relating to the series. I thought it would be fun to make a shadow box with one of my Walking Dead comics inside, with a signed bullet casing by Tony Moore (the original artist of the series) mounted below on some nails. And to spare the details, it went ON and ON and now I have a whole project planned out, which I've made a collage of below, to give some reference: 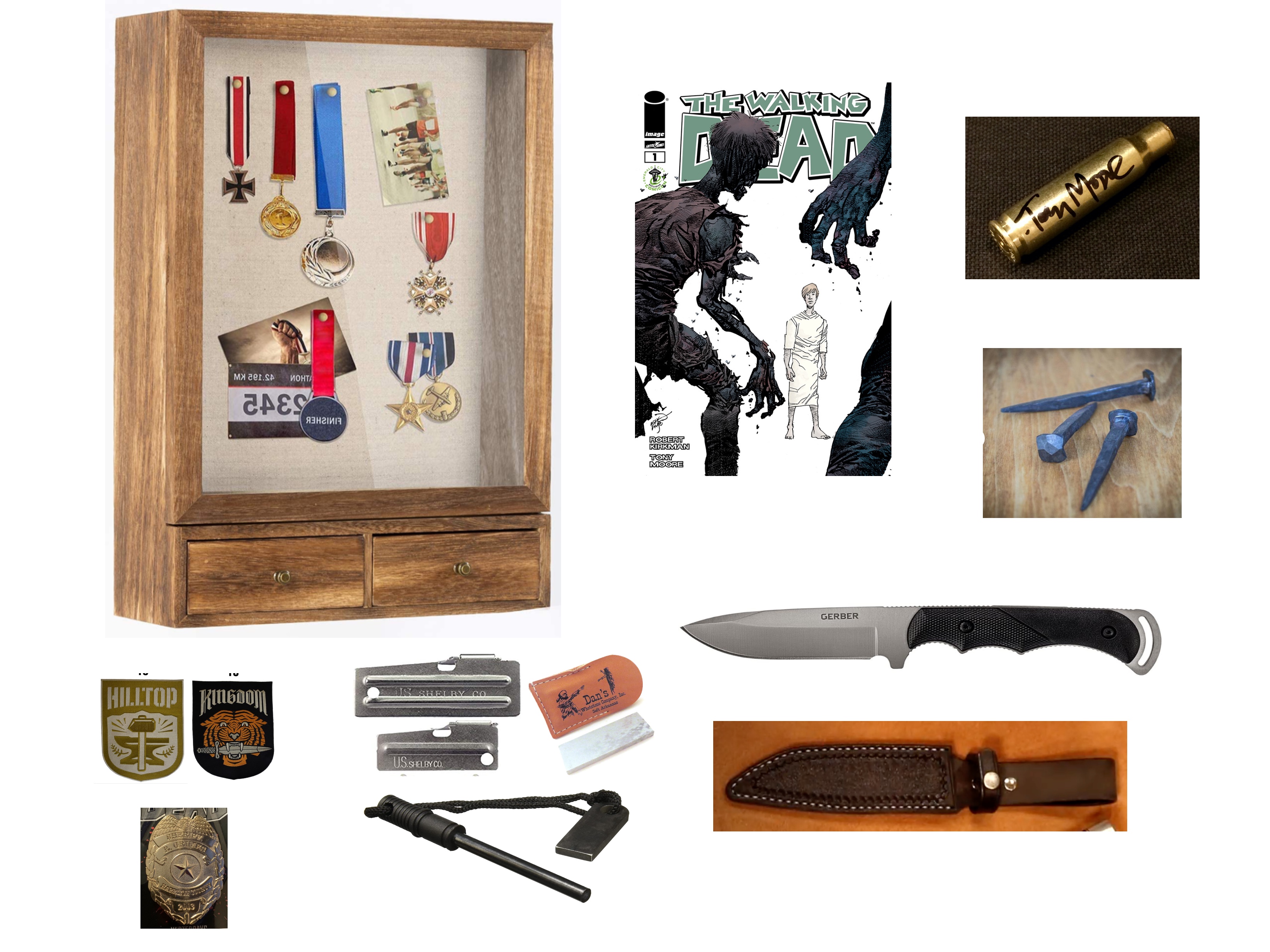 So, this plan is exactly what I'm looking for, it's great. But I want to weather the shadow box inside and out and make it look like its been sitting in an abandoned house for years and years, collecting dust, and dirt, and grime. Looking into weathering techniques on doing that, I haven't found ANYTHING on weathering glass or picture frames. I'm thinking I might need to just leave it in my basement for a month or so to let it actually collect dust and grime, but I wanted to know if anyone had any hidden techniques about that kind of thing? I'm trying to make this look as realistic as possible, but I'm also stuck because it seems like the must realistic thing I could do would be to let it sit and age itself. Anyone have any thoughts? Thanks!


For those wondering about the project:

I purchased a variant cover of Walking Dead #1 from eBay a few weeks ago, it was an Emerald City Comic Con exclusive and also my first exposure to the series. It's a very common comic, so I had no issue weathering and aging it. I bent the spine, rubbed off the ink in some places, pressed dirt in the cover, put a little bit of water on it, and really made sure it looked like it went through the wringer. Underneath the comic, I'm going to mount a signed bullet from the artist of the first 6 issues of the series, Tony Moore, on a couple of hand forged nails I found from a blacksmith on Etsy. The signed bullet casing can be be bought on his website's store, and while I don't like guns, I thought this was really cool and unique. The hand forged nails are a callback to The Hilltop, a settlement that is known for their blacksmithing, and is one of my favorite places in the series. Underneath those things, there is still a lot of space, and since I've been needing a good knife for whittling, I thought it could be fun to get a knife and make a leather sheath for it, using what I learned from making my blaster holster for my custom Star Wars blaster. It's something I could actually use and it would look super cool in there as a nod to all the times knives are used in the series. Below the main window are two drawers. In the right drawer, I put some small pieces of survival gear inside, including a flint and steel, a whetstone to sharpen the knife, and my favorite thing, a couple of military can openers, (p-38 and p-51) to call back to one of my favorite things in the series, the various discussions about canned peaches and canned green beans. In the drawer on the left, I put a patch for The Kingdom, a patch for The Hilltop, and finally, Rick's badge, specifically from the comics, not the TV show. (Not to say I hate the show, I love it a lot and really enjoy it, but the badge in the show is a weird tacky star, and this entire project is themed around the comic, not the show, so it would look and feel out of place here.) This project isn't exactly cheap, but it's definitely not as much as I thought it would cost. I'll probably end up doing this project in steps, carefully weathering things and making sure every part is the best it can be so when it comes together, it'll be something I'm super proud of. Just seeing these pictures together above gets me super excited! Hopefully I'll get the shadow box soon and I'll be able to get to work aging that to start this off!
Last edited: Jun 20, 2020

I'd experiment with using spray glues and either dusting with real dust or something like fullers earth, maybe even talcum powder that you paint over. You could also try using (heavily) watered down white glue and sprinkling some sort of dust (real or fake) on top. I'd probably get the cheapest frame that you can buy to experiment on or use pieces of scrap wood and buy replacement glass for frames to experiment on.

You can also try cheap hairspray. The good thing about hairspray is that it comes off with glass cleaner, in case you make a mistake.

Shaun of the Dead - Cricket Bat