I've abandoned quite a few prop projects over the years, and while I have revisited a couple here and there (only to abandon them again, usually), I think I can call this one done. Maybe not *done* as I might have originally intended - pretty sure this will be a one-off... while a younger, more ambitious me might have done a run of them.

Anyway, here's where I started with this project, all of 11 years ago (yep, I checked the dates on the pics, and that's how long it's been!) Even earlier than that by a few years, I used to offer castings with a lineage back to a Crysknife from the production of the film.

I can't remember if it was me or this particular friend (it was probably him) who proposed a "what if..." challenge, wherein I would re-create a Crysknife sheath that was in a deleted scene from the film. It was wielded in the scene by Shadout Mapes - played by Linda Hunt - and my only real reference was a photo in a book and a few blurry screen-caps...

So I set about sculpting a rough shape in clay on top of one of my Crysknife castings...

Which I then made a quick waste mold of, to cast a hard copy that I could refine even further...

When I was done with the hard copy I re-molded that, and that mold allowed me to slush cast a final hollow version of the sheath.

The next challenge was to alter the shape of the Crysknife slightly, so that it would actually fit inside the sheath nicely. The main problem was the "hump" present in the original Crysknife just forward of the metal collar separating the blade from the grip - that hump had to go, otherwise the sheath would have to be paper-thin in that spot.

My goal in doing the sheath was to make it in a way that would create a single continous contour, as it transitioned from sheath to knife, much like the original concept drawing:

With a casting of the Crysknife altered to fit the sheath, I re-molded that to cast the final version... which didn't really fit all that great.

Besides the obvious less-than-perfect alignment of the collars on the sheath and knife, there was also the conundrum of getting the sheath to stay on the knife. I didn't want to rely on a friction fit, at the risk of ruining the painted metallic finish that the collar on the knife would eventually have. I tinkered with some very thin rare earth magnets embedded in both knife and sheath, and while they did provide *some* holding power, I wasn't exactly wowed by the solution. And it was at around that point that I abandoned the project...

But now it's finished. I punched in a couple more magnets, and grafted a small piece onto the collar of the sheath to make it line up a little better with the collar on the knife. Yeah, it's not 100% perfect, but I'm happy enough with it.

RPF PREMIUM MEMBER
Loving this. This is on my list of wants. Well done. Let me know if you ever do a run.

RPF PREMIUM MEMBER
Well done, love it! Yes, you should do a run!

RPF PREMIUM MEMBER
Thanks gents! I know you should never say "never," so instead I guess I'll say that it's "not likely." (but you never know... )

Beautiful work! If it took 11 years to get such results, perhaps it was worth it. Well done.

RPF PREMIUM MEMBER
The bone look and metal effect are spot on. Excellent work. I would second a run.

novacat17 said:
If it took 11 years to get such results, perhaps it was worth it.
Click to expand...

Well, it sat languishing for 11 years. The actual work - back then and just recently - was more like a few weeks.

Thanks all for the kind words

D48thRonin said:
Thanks gents! I know you should never say "never," so instead I guess I'll say that it's "not likely." (but you never know... )
Click to expand...

I really want one.

I'm about to try doing the same thing, and I was wondering if Smooth-Cast Rebound 25 can be used to do a 1 piece glove mold of my sculpt of the sheath. Since a sheath is much longer than it is wide, I'm not sure if that will make it more prone to tearing when de-gloving. Any thoughts or suggestions, I'm not married to the 1 part mold idea, I could do 2.

RPF PREMIUM MEMBER
Any chance at all we can talk you into doing a run of these?

Agreed looks fantastic and your hard work has paid off ten fold. Like many here if you ever decide to mass produce and make a run happen you have folks waiting in the wings to purchase your creative art. Many Dune fans will love the opportunity to have this beautiful artisan piece in their collection. Again fantastic and thank you for sharing it this made my day!

Dune Quote- "God created Arrakis to train the faithful. One cannot go against the word of God "

RPF PREMIUM MEMBER
Yeah, not likely fellas... unless someone has developed a device that would allow me to cram 36 hours into a day. I appreciate the interest though.

Loving it man. Great work! ANd good thing you revisit

The same friend who pestered me into finishing this project recently put a bug in my ear about doing kits... and suggested utilizing a modern technological solution to help facilitate that and make things easier - i.e. 3D scanning my patterns, using 3D modeling to generate a consistent wall thickness for the sheath, bumping the size up slightly (to correct for generational shrinkage of the production-lineage piece that I started with), and then 3D printing master patterns that would then be molded to produce the kits.

I dug out my original patterns the other day - I figured that while we're at it, we might as well re-do the original knife as well (if only to correct for the shrinkage issue). 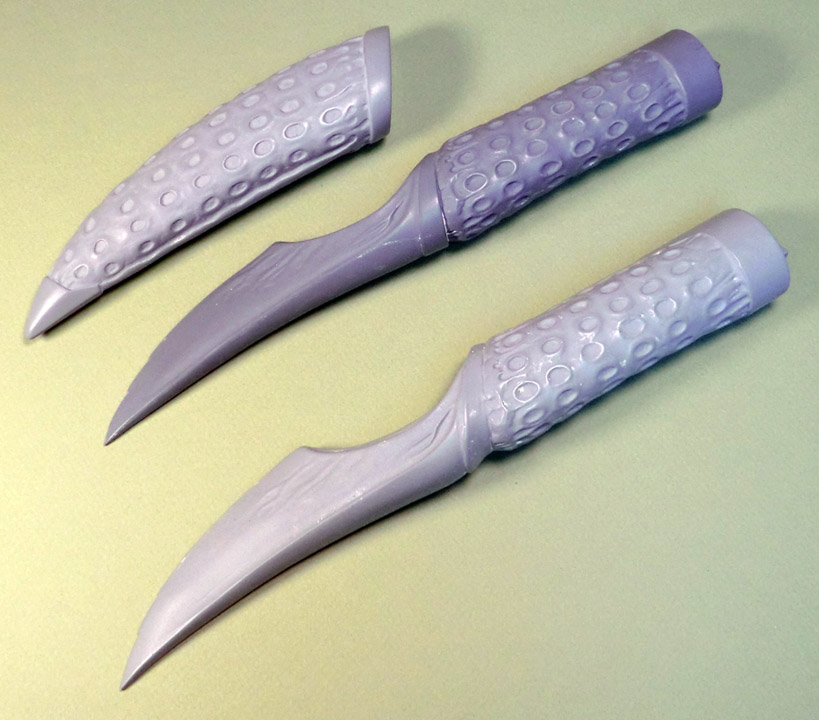 Don't have a time frame for all of this at the moment, but I will update if/when things start to become clearer...

Does anyone know how/where a reasonably priced holster for pkd blaster?