Introduction:
Hi,
I am a 25 year old modelmaking student at the University of Bolton and this post will describe the process of one my assigments. The idea behind this project was to take a prop (from either film, television, stage or literary sources) and re-design/ reimagine it for a hypothetical production. Being a fan of classic gothic horror stories I looked at the character Dr. Abraham Van Helsing from Bram Stoker's novel Dracula and imagined what type of a kit this long-time monster hunter would have. This is my first ever post on this forum, and I hope you people will enjoy it. I am looking forward to the feedback, so the they journey begin.

Part 1: Design
For the design I started out by "studying" the character a little bit closer. Van Helsing was a dutch doctor of many disciplines (amongst them medicine, philosophy, and litterature), which meant he was highly educated and experienced. For me this meant the the "kit" that I was going to design had to reflect the character of a man who was very efficient, and knew exactly what he wanted. The idea behind my kit was that this wasn't something that he would bring to out on his "raids". This was more or less a mobile lab/ office he would bring to the various hotels/ inns amd other places he would stay. This meant this kit didnt have to be pocket or backpack sized. 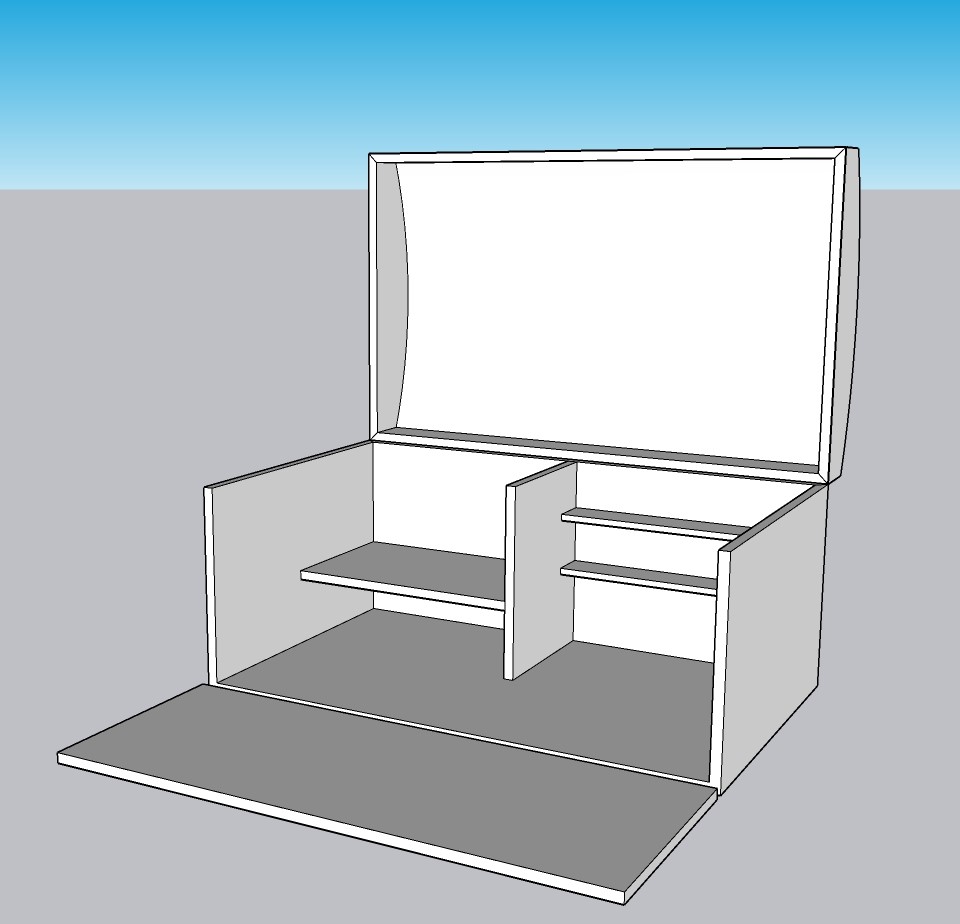 I started by making my first sketch in SketchUp. I based my design on old steamer trunks. Van Helsing's various tools (wooden stakes, mallet, daggers etc.) would clip or be strapped into the lid of the trunk, whilst the bottom would act as a writing desk, book shelf, chemical rack, and sample storage. 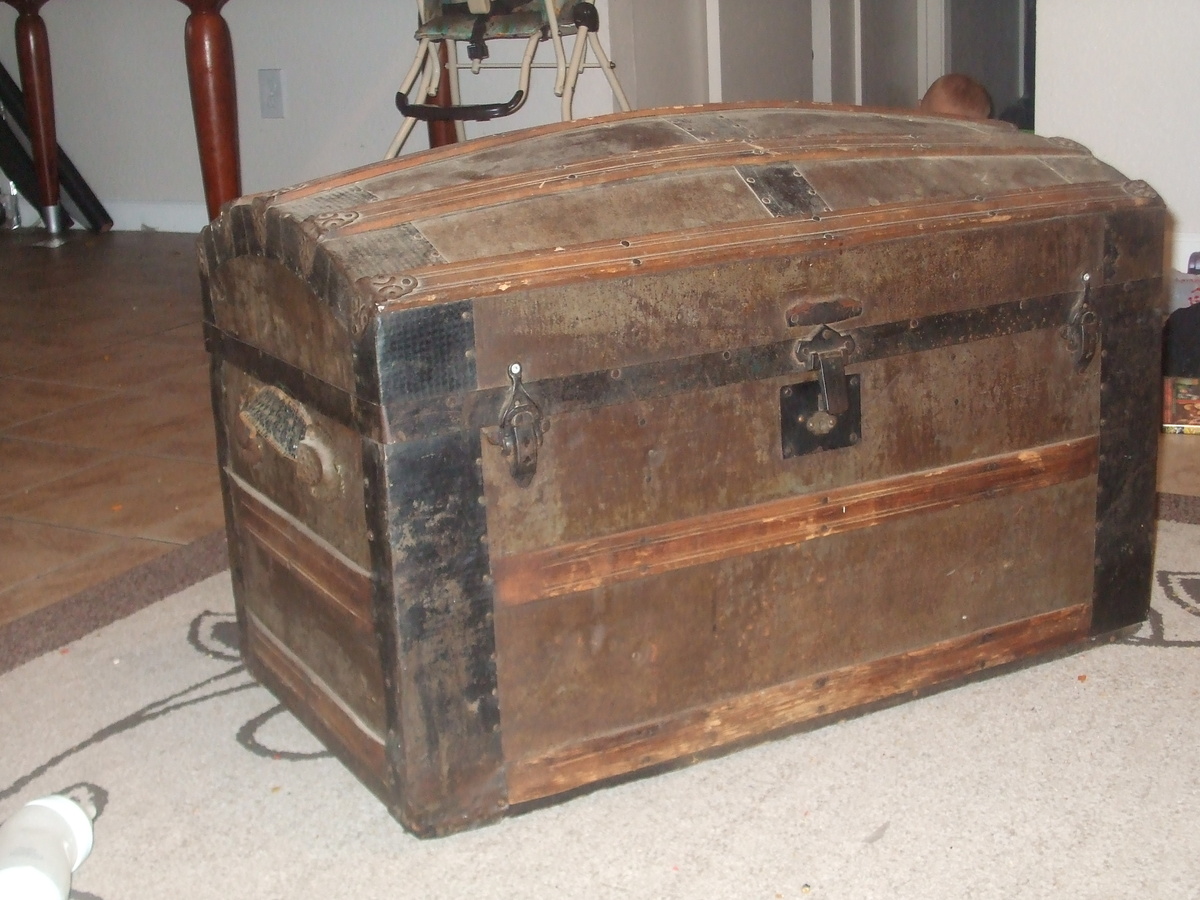 The design was also inspired by other sources such as professor Broom's box from Hellboy. I lot of design elements such as storage in the lid and the drawers made it into the final design. 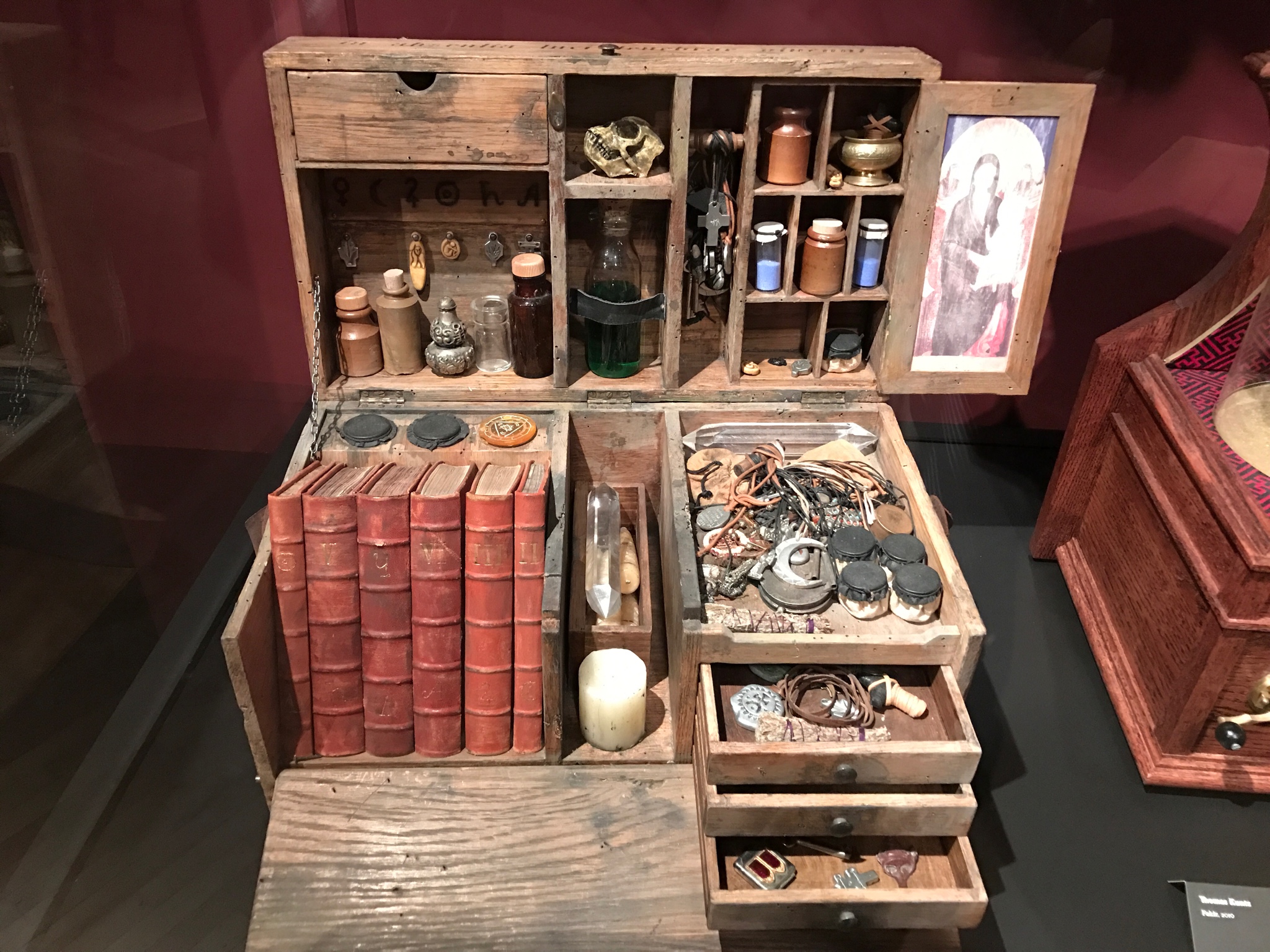 For the next sketch I wanted to make better use of the space in the box. The front was very "unused" and even the lid had a lot of negative space that could be filled.
This is also what became the final design before I started production. 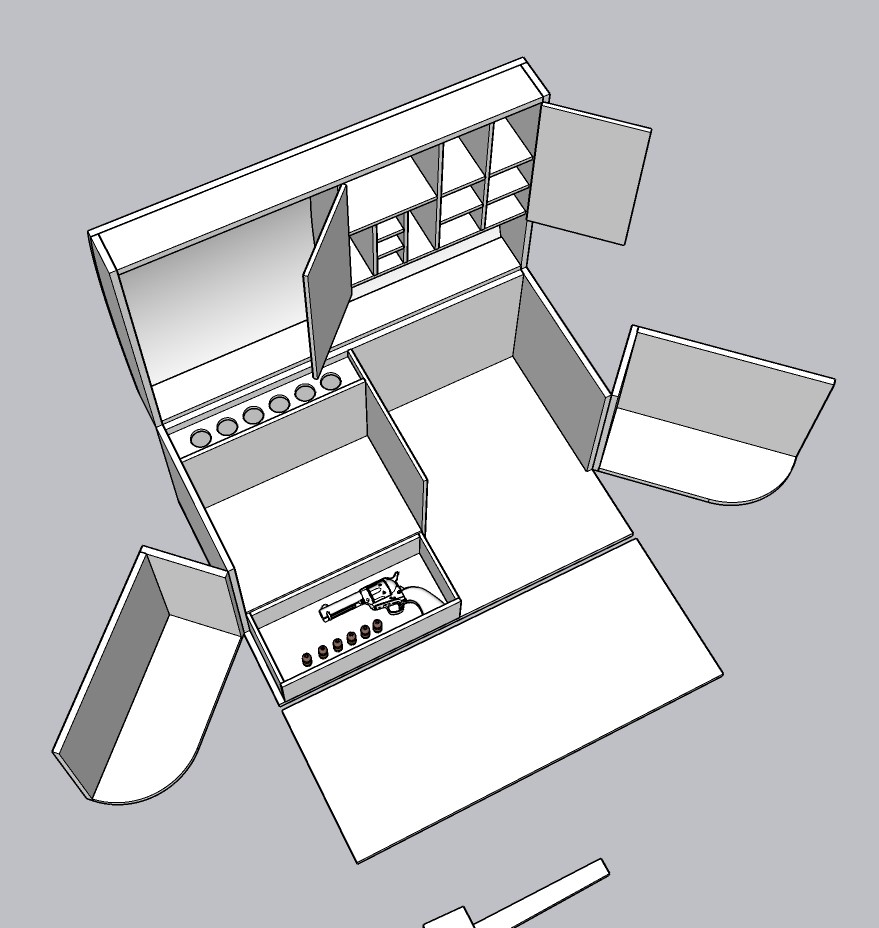 The drawer holds a Colt "Peacemaker" Single Action Army, and six silver bullets. On top of the drawer we have a small storage space for diaries, encyclopedias and other types of useful letterature. Behind the books we have a storage for vials with various urbes and poisons. On the right to the books there will be a rack for chemistry containers and other scientific glassware. The unfolding front sides leaves room for wooden stakes, holy water flask, flashlights and anatomical drawings of different beasts. The front "flap" acts as a make shift writing desk extension.

As I mentioned earlier the lid will hold some classic vampire hunter tools like a dagger, a mallet, a small shovel and a crucifix/ rosary. In addition the shelves in the lid will hold trinkets, talismans, personal items and a assortment of coins. As a small easter egg I was thinking of putting the paiting of mother Mary that professor Broom has in his box on one of the cabinet doors in the lid. 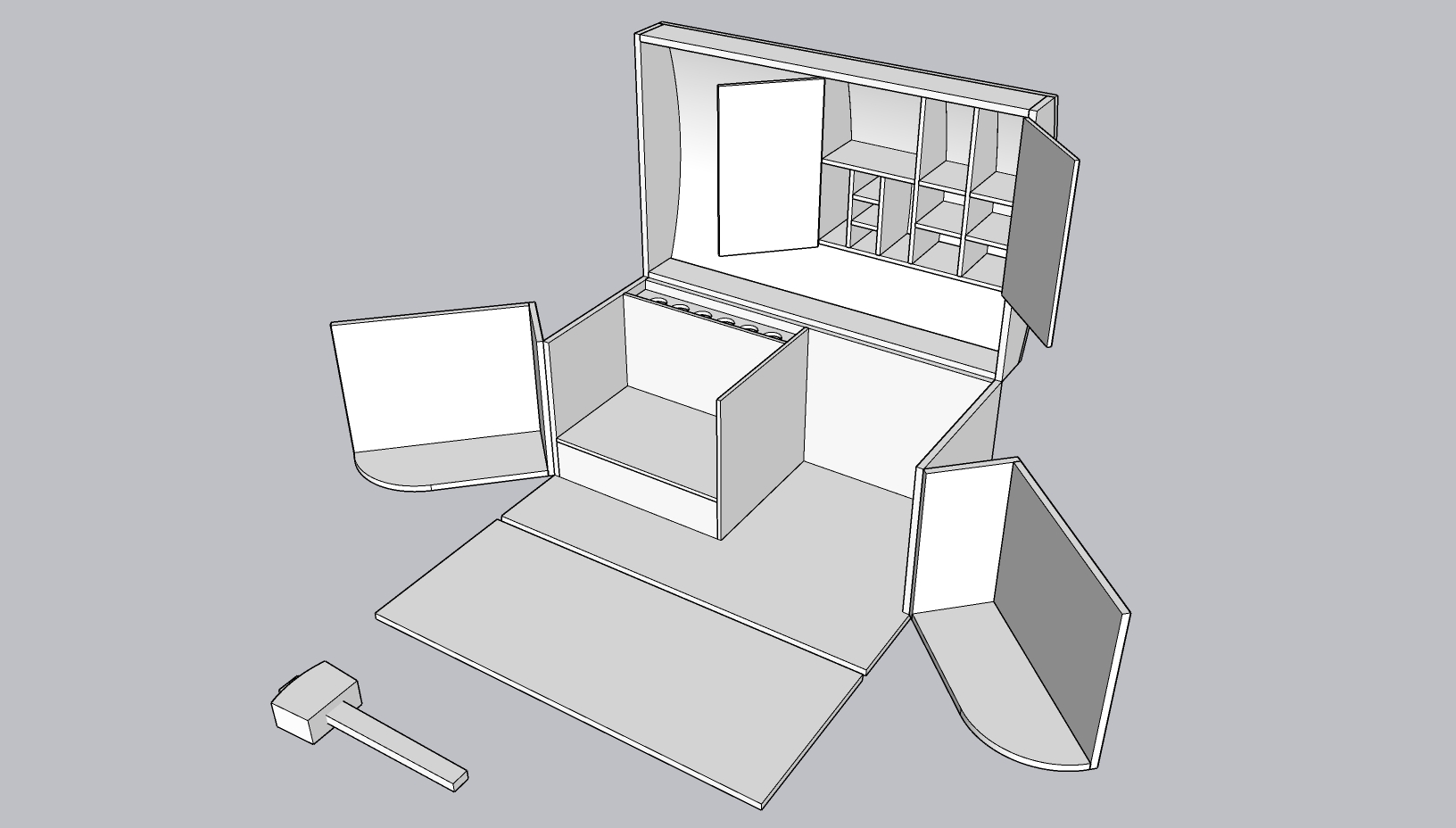 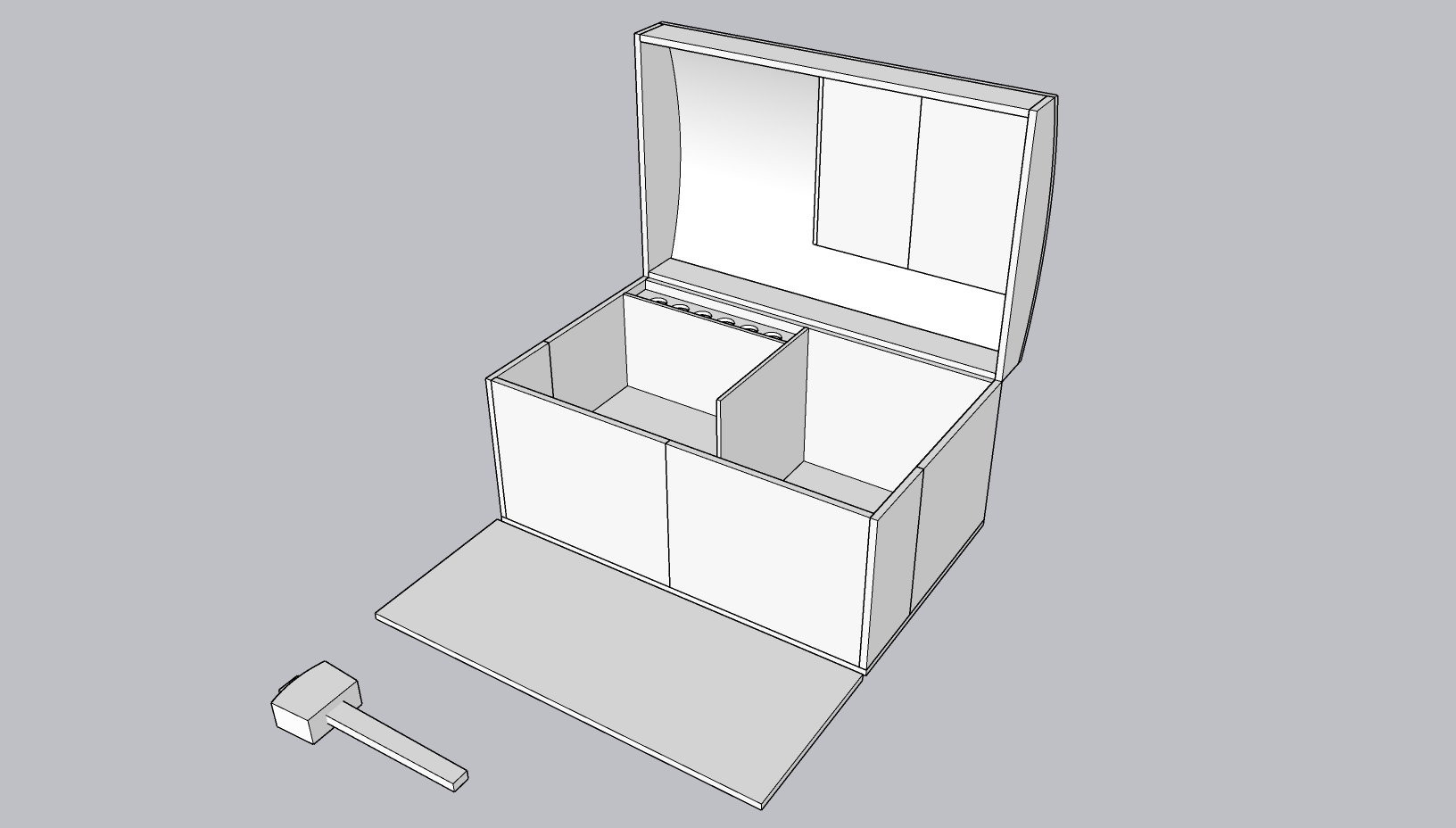 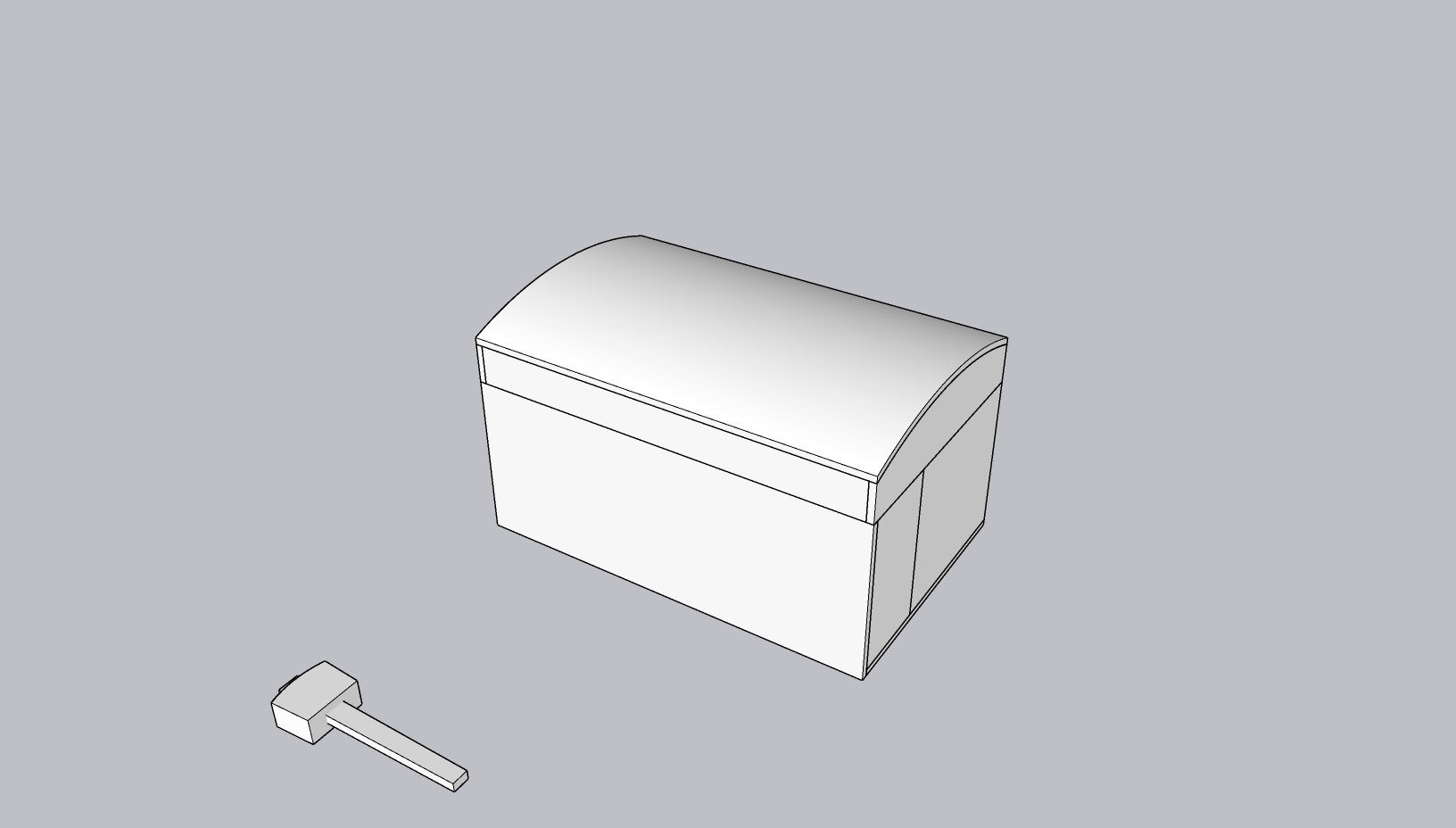 Very awesome idea. I look forward to seeing your progress!

RPF PREMIUM MEMBER
I like your approach and am looking forward to seeing your continued progress. Thank you for sharing!

Thank you so much! More is to come. I am currently in the middle of the construction process.

The Van Helsing diary would be a cool addition. Find the text, change the font, print on some old paper, bind it in some old journal.

Or the Demon Hunters Handbook: The Van Helsing Diaries

In the Free Paper Props section, I uploaded the page from the Bram Stoker's Dracula that Van Helsing is reading from too.

Every few years, I end up returning to the quest of trying to identify the Missale Romanum / Rituale Romanum that Anthony Hopkins is reading from at the end of Bram Stoker's Dracula. As a person that likes collecting books used in movies, I'd love to be able to identify it or track one down for...

Odin82 said:
The Van Helsing diary would be a cool addition. Find the text, change the font, print on some old paper, bind it in some old journal.

Or the Demon Hunters Handbook: The Van Helsing Diaries

In the Free Paper Props section, I uploaded the page from the Bram Stoker's Dracula that Van Helsing is reading from too.

Every few years, I end up returning to the quest of trying to identify the Missale Romanum / Rituale Romanum that Anthony Hopkins is reading from at the end of Bram Stoker's Dracula. As a person that likes collecting books used in movies, I'd love to be able to identify it or track one down for...

uuuuuh! Ma dude! That is an amazing idea! I'll see what I can do.

Part 2: The Box
The main construction of the box was fairy easy and not too advanced. The material of choice was 15mm thick MDF. Its could take a nail or two wouth splintering pluss it would give the prop and appropriate ammount of weight. The big pieces were cut with a bandsaw and glued together with woodglue, after trimming some of the edges with a planar and some sandpaper. A nailgun was used to secure the pieces together whilst they were drying. 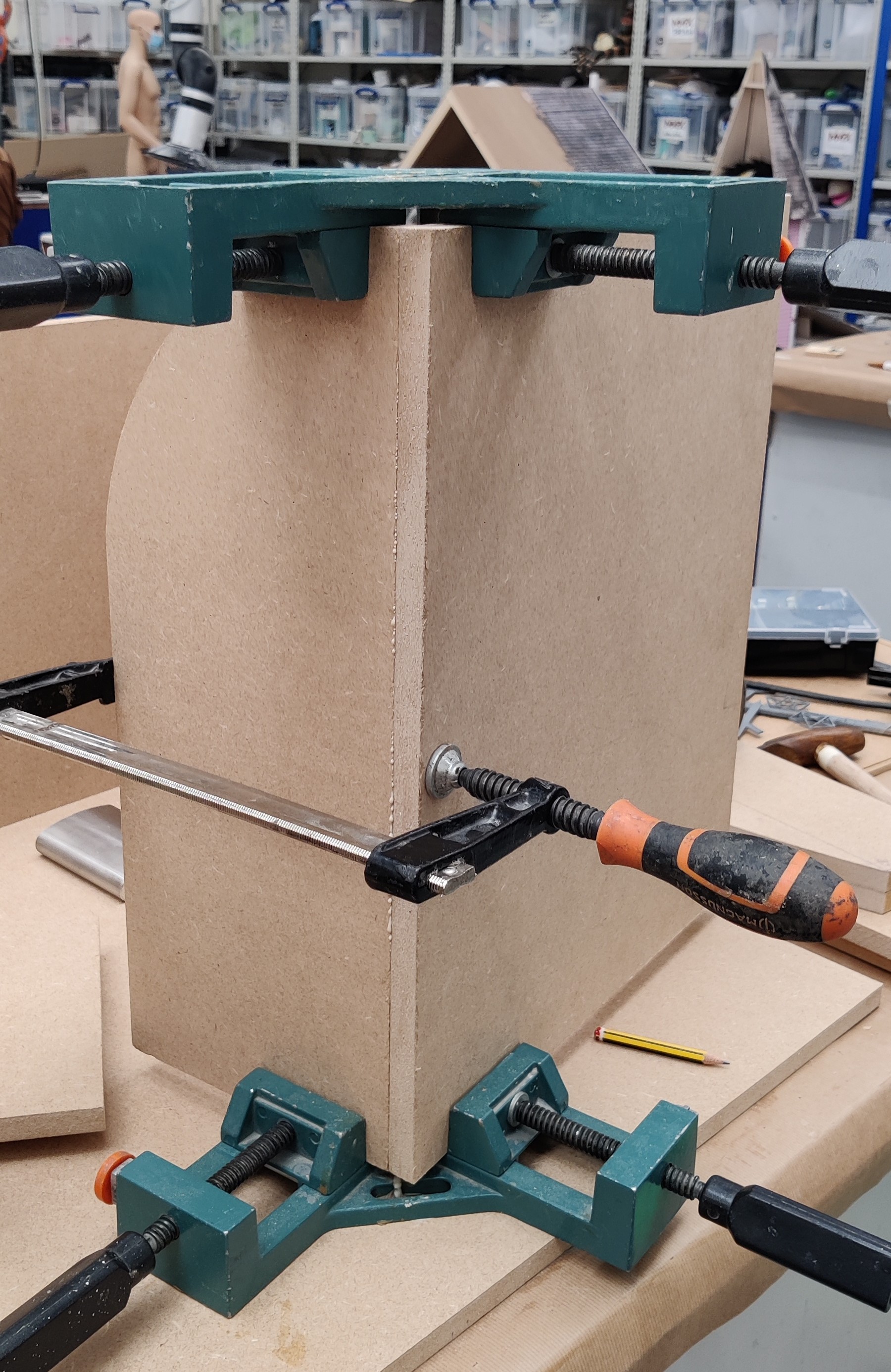 The curved top was a little bit more tricky. The first thing was to construct the frame. The front, back and sidepieces were cut and trimmes. To draw a perfect repeatable arc ar marked the sides and the highest point and (with the help of some fellow students) bent a steel ruler to match up those points. All that had to be done was to trace the arc of the ruler. 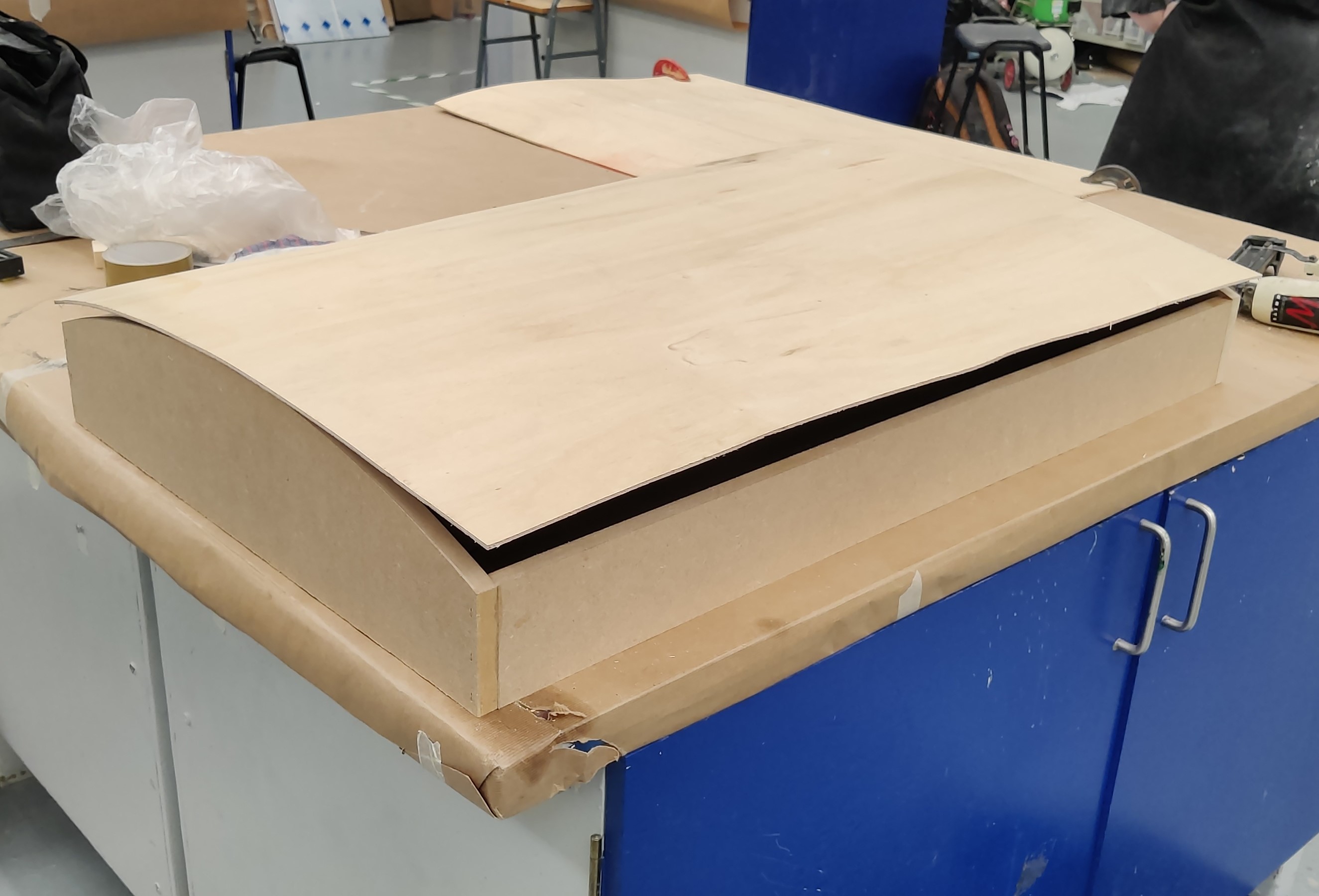 After gluing together the frame the next step was to bend a sheet of plywood over the top. My first attempt failed horribly. I applied woodblue and tried nailing down the piece with the nailgun, but the pressure was too powerful and most of the nail shot straight though the plywood. After applying some pressure to thewood, most of those nail ripped off and I had to start all over again. 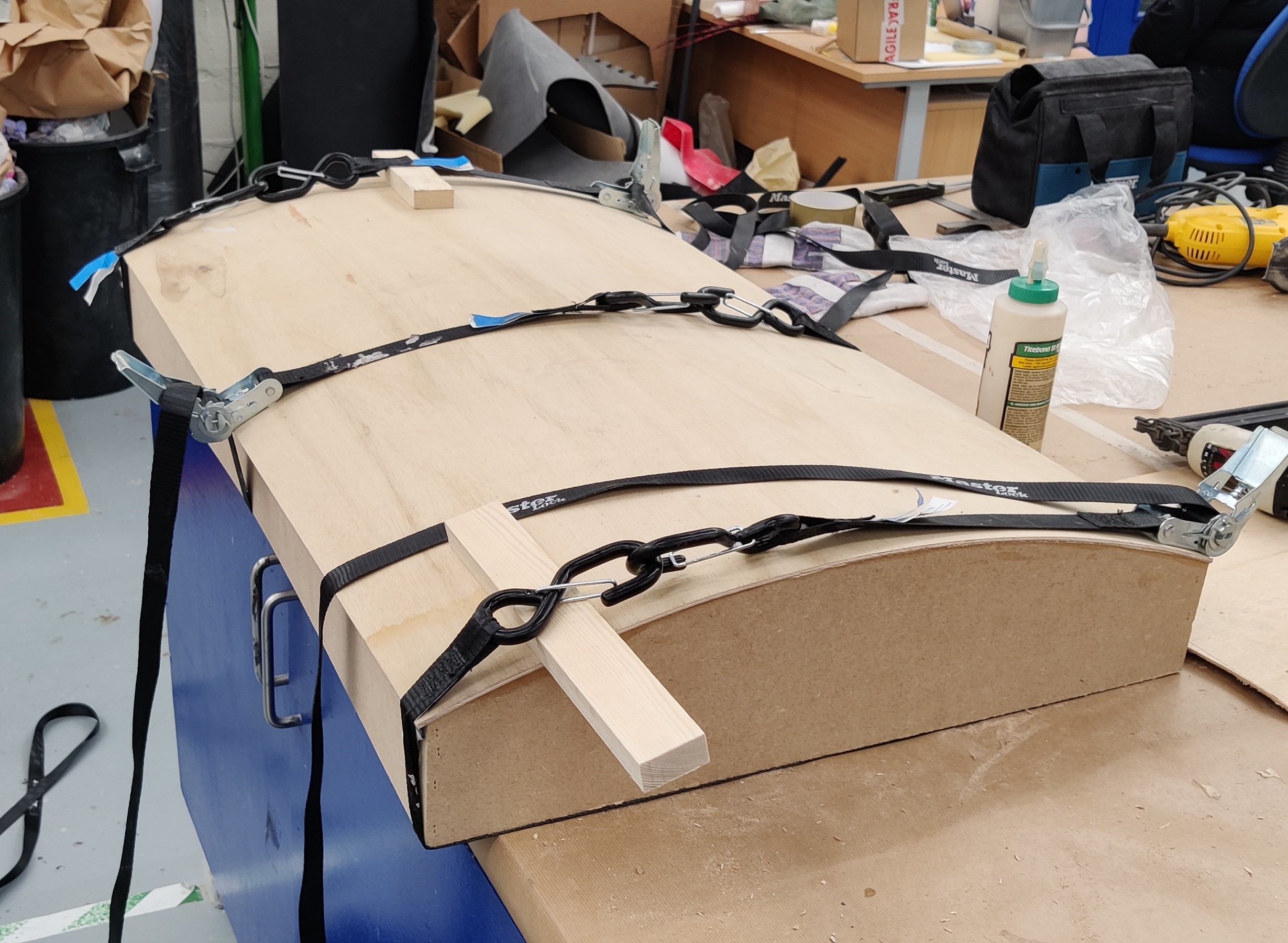 For the second attempt new glue was applied but this time the plywood was strapped down using ratcheting straps. A staple gun was used to hold the wood in place instead of the nails. The staples had a bit more grip and didnt chew through the wood.The only drawback wit this method was that the straps slightly warped the frame of the box. I'll just write that off as "old age", so it will be fine.

The two swinging front pieces ware attached to the main body of the box using piano hinges, making sure that there was enough of an allowance for the hinge between the pieces. The holes for the screws had to be countersunk to allow some space for the screwheads.

Part 3: Shelfes & Drawers
Given then quantity and the size of the shelves it was a lot more effective to laser cut them. This would cut down on worktime as it rectified the need for sealing the material. The 3D model was used to create the cutting files, by deconstructing the shelves into cuttable 2D planes. 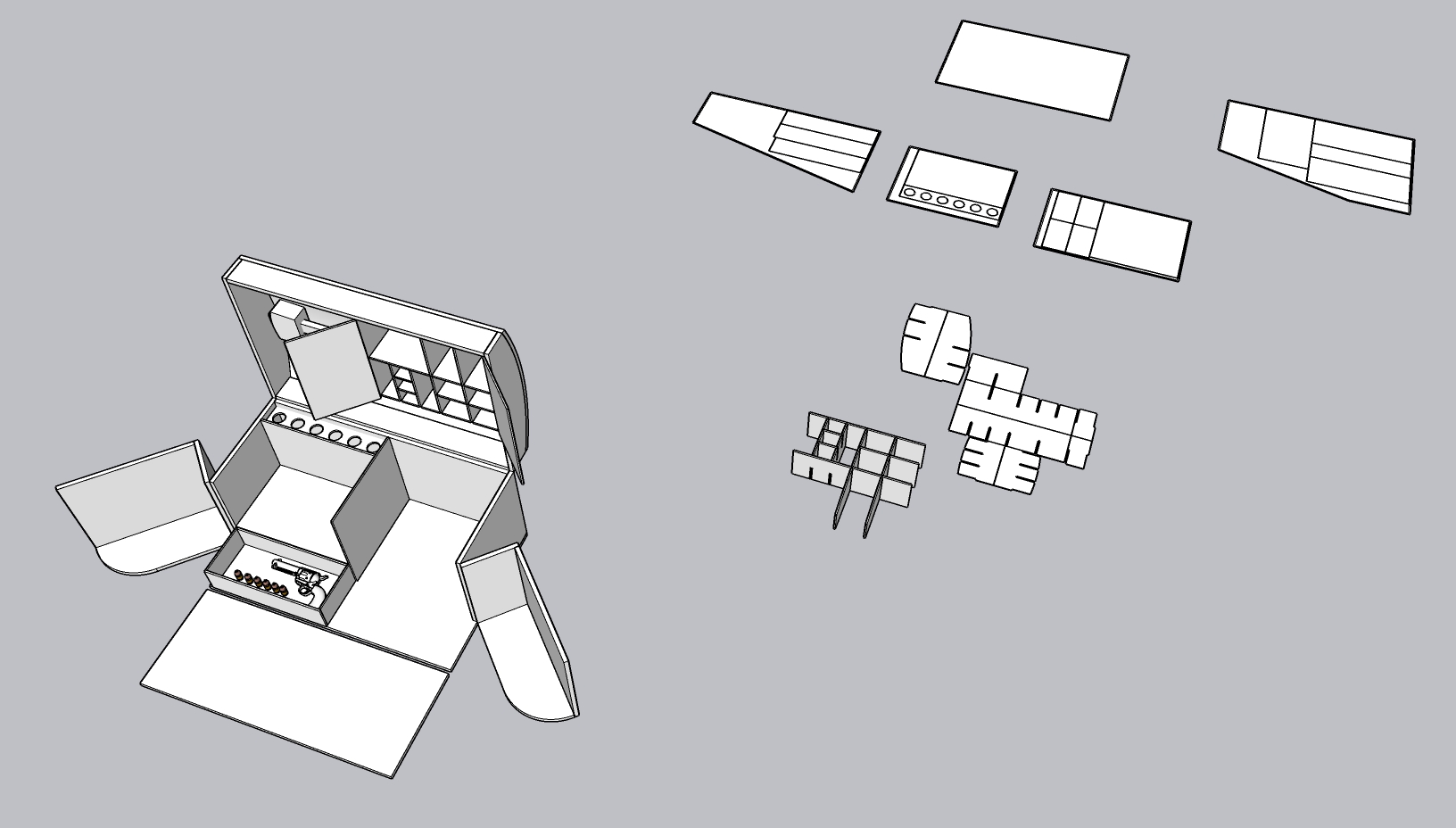 For the shelves in the lid, a slot-fitted design was implemented, to make the shelves support themselves. The files were out of if 6mm MDF and cleaned using sandpaper, and all the parts were covered in the woodgrain vinyl. This Vinyl was applied to the entire interior of the chest.

The material was too thin to put screws or nails into the sides of the boards. This meant that different methods of mounting were required for some parts of the shelves in the body. For the main “divider” in the middle of the box (3) a spine of timber had to be cut and glued to the body (1 & 2) to hold the plate in place. To mount the bottom and back of the bookshelf (4 & 5), 4 supports were cut from 6mm MDF that were glued and screwed to the walls These supports made it possible to slot in the bottom and attach the back (5) using kitchen shelf door catches. This made the back plate detachable and created another secret compartment. 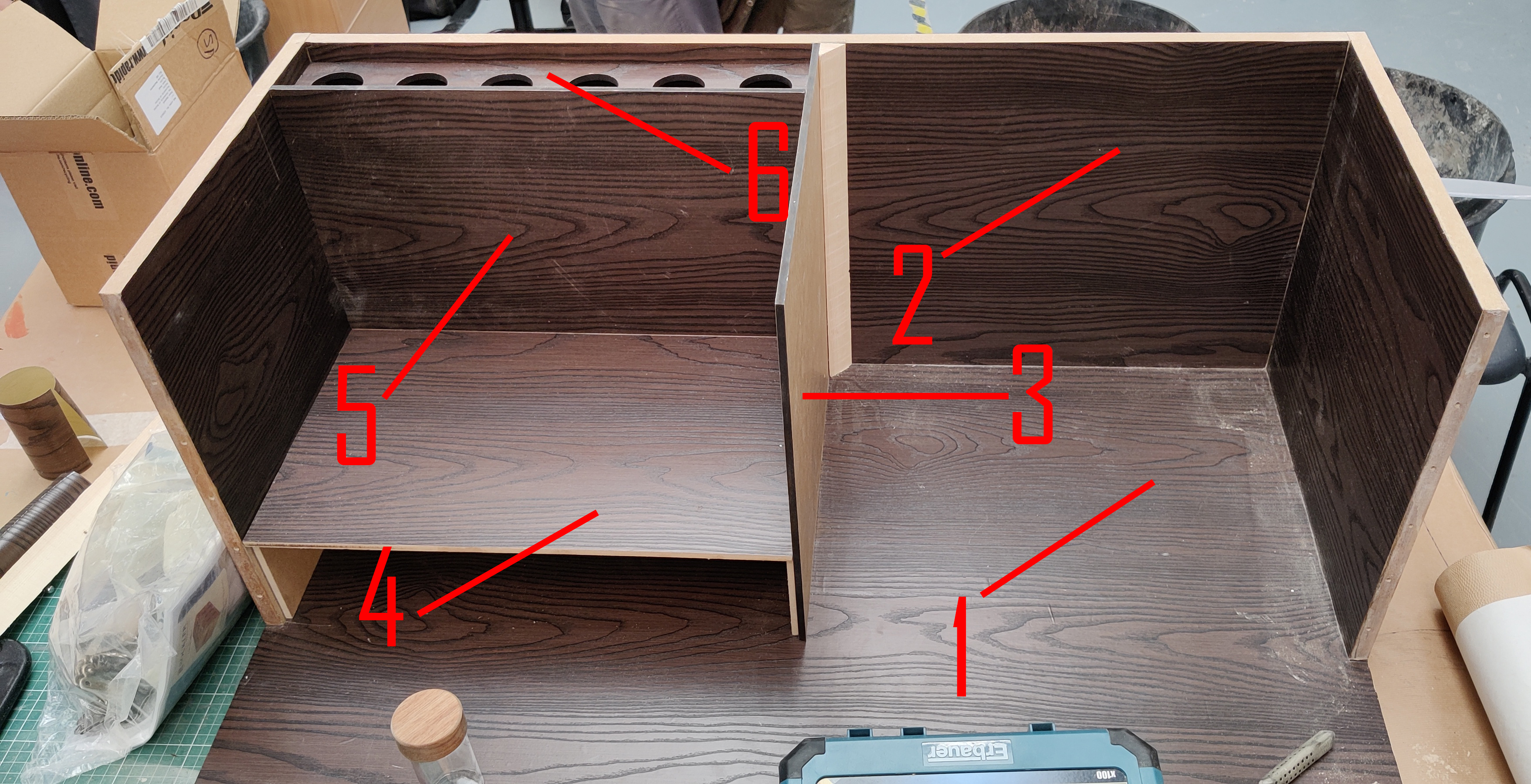 PS: My apoligies for not posting on this thread in a while. Life has been very busy. Here are some pics of the final product. 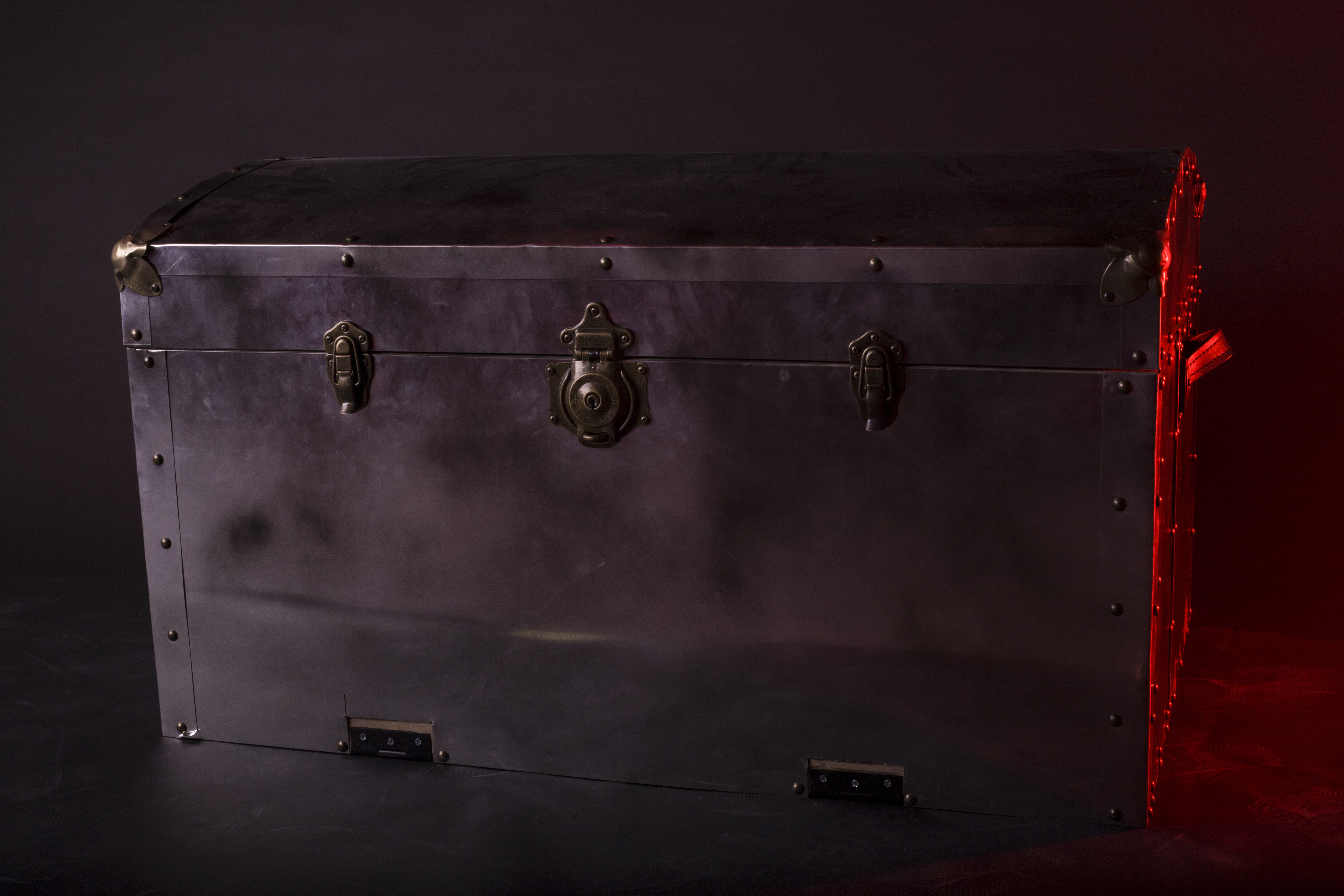 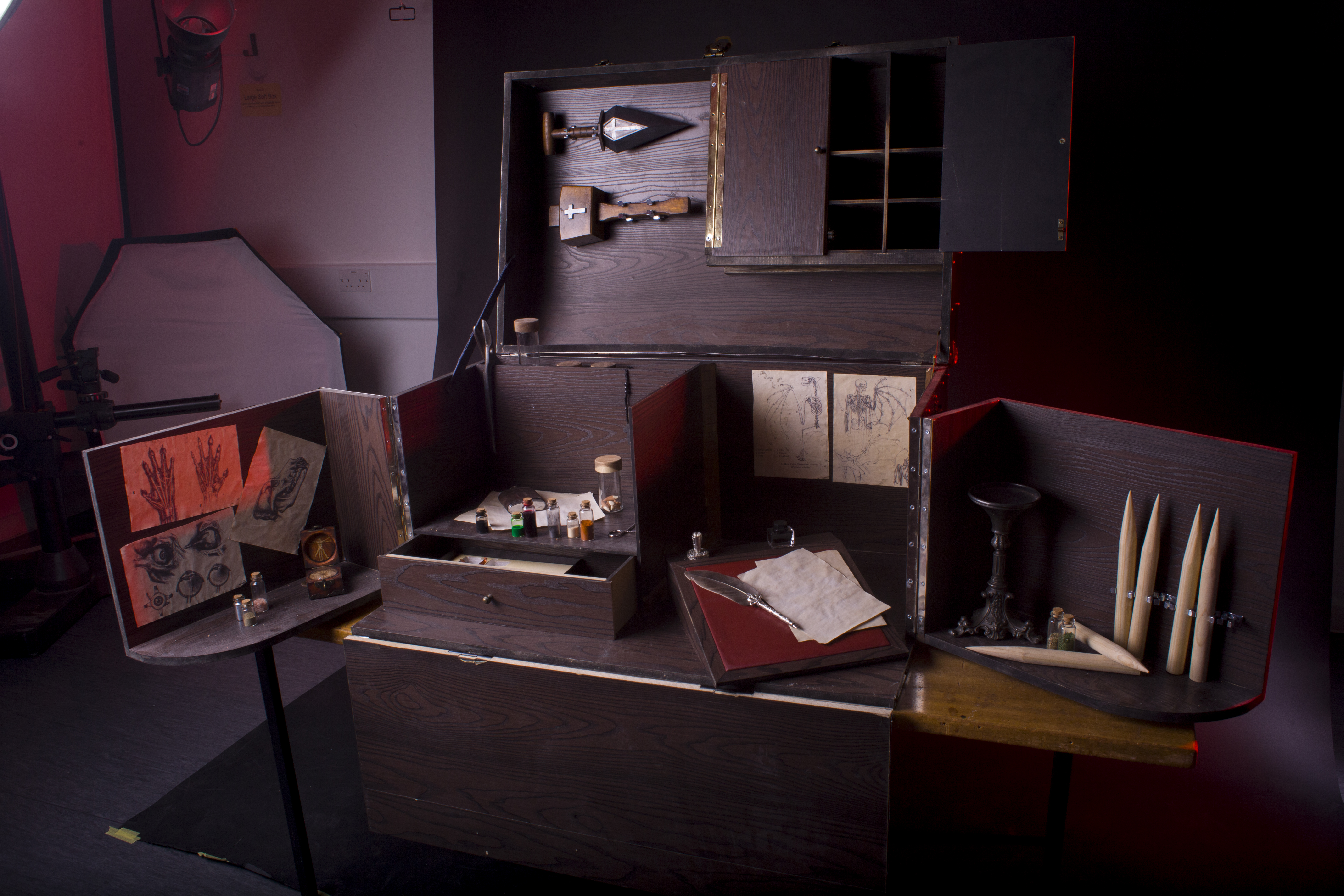 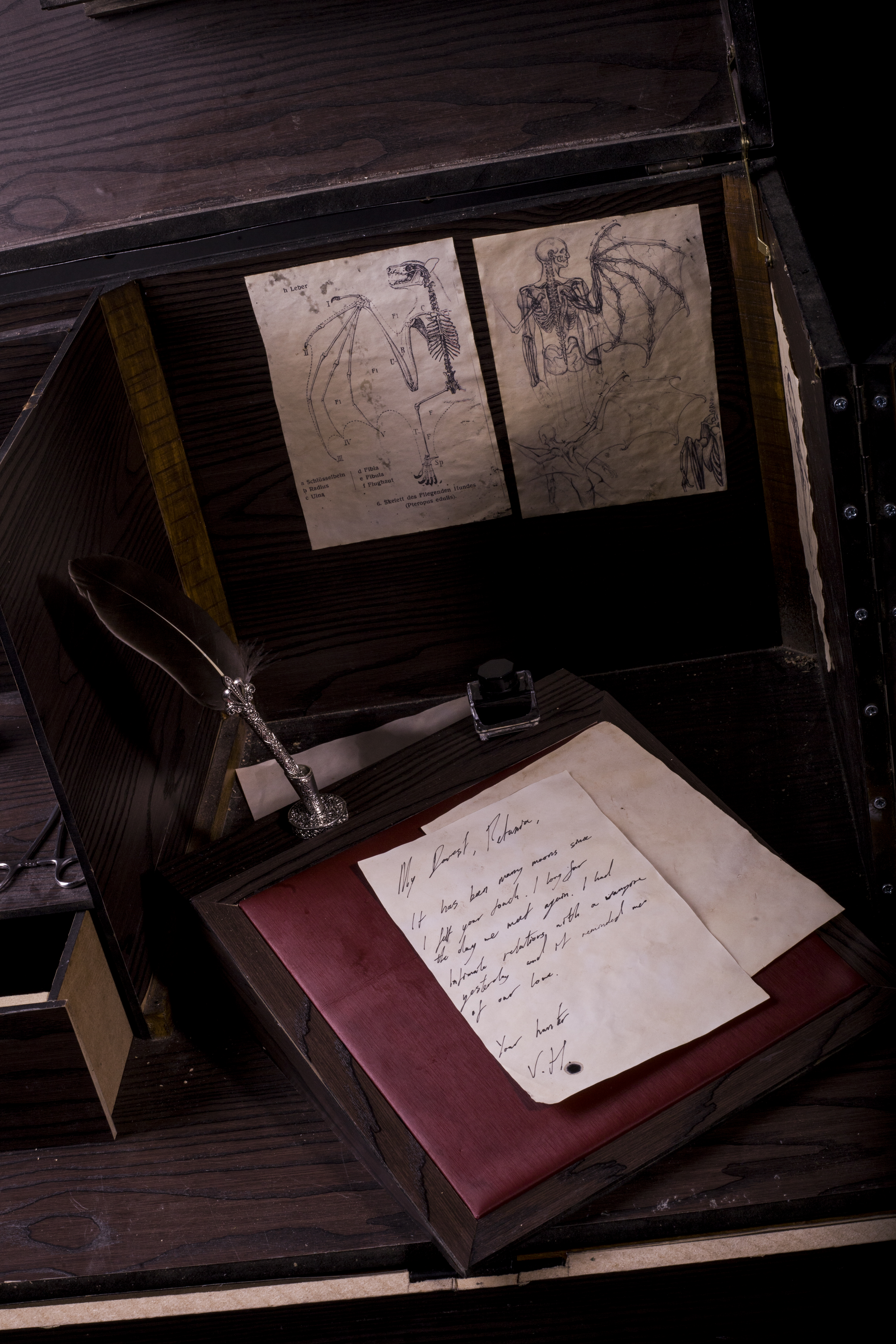 If you can read this... you'll have my respect. 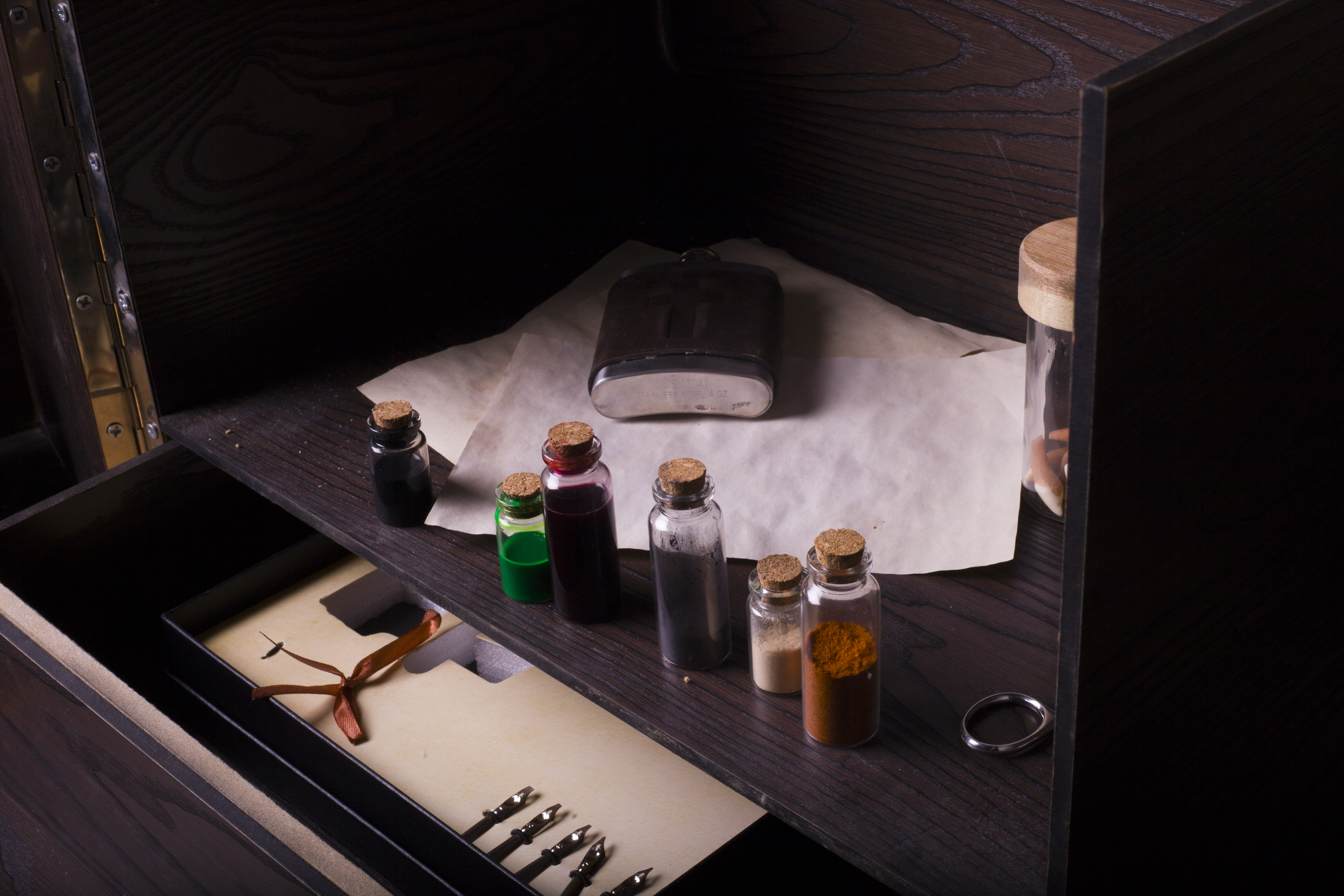 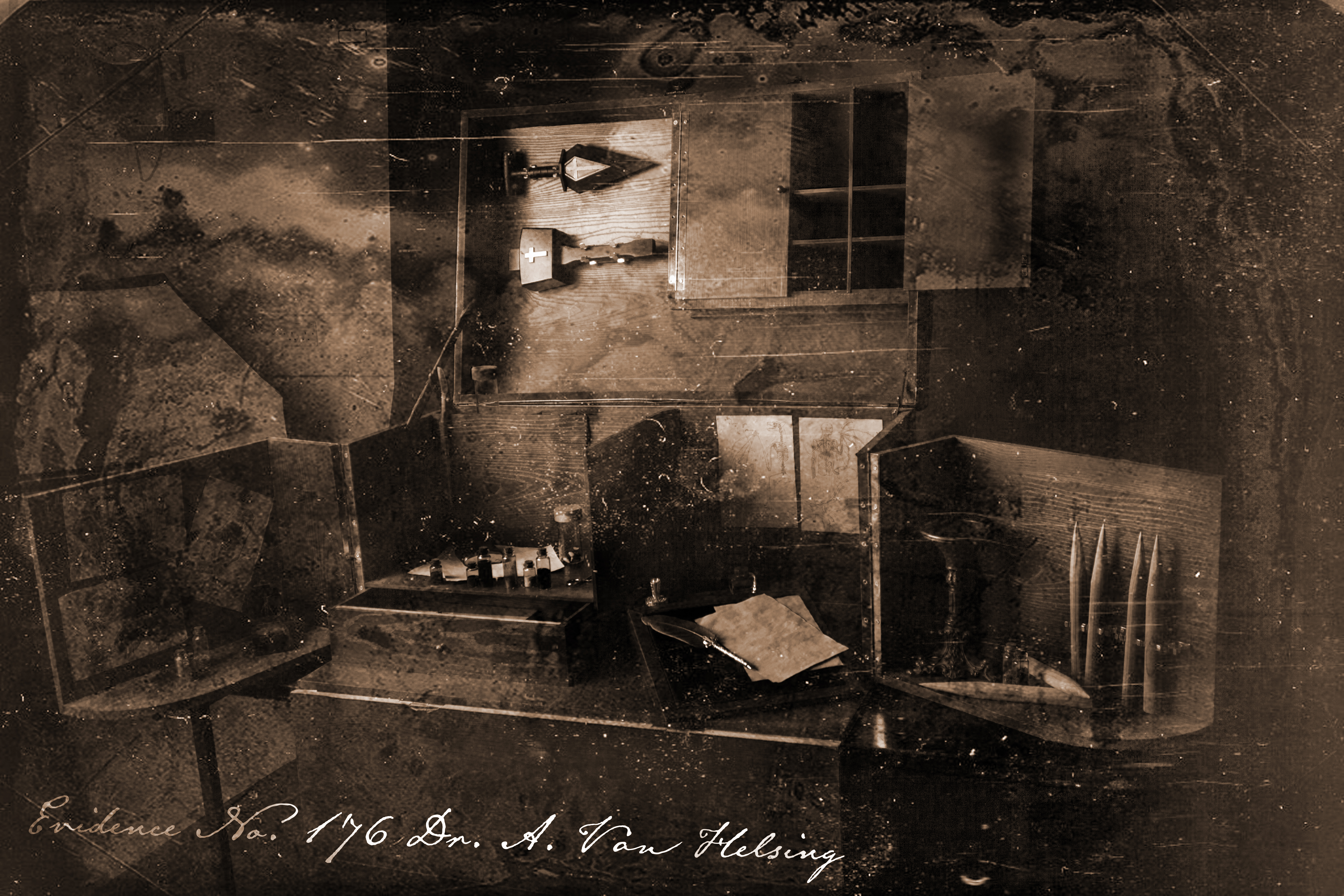 RPF PREMIUM MEMBER
Thanks for posting the update! Great work!

I've released my Ark of the Covenant 3d Files