After a few years of focusing on more original costuming, I've returned to making screen accurate props and costumes (and returned to the rpf!), and I thought I'd share my big build from this past winter: hand-knitting a replica of the lavender and yellow plaid blanket Clara Oswald wraps up in at the end of the Doctor Who s8 episode Mummy On The Orient Express. 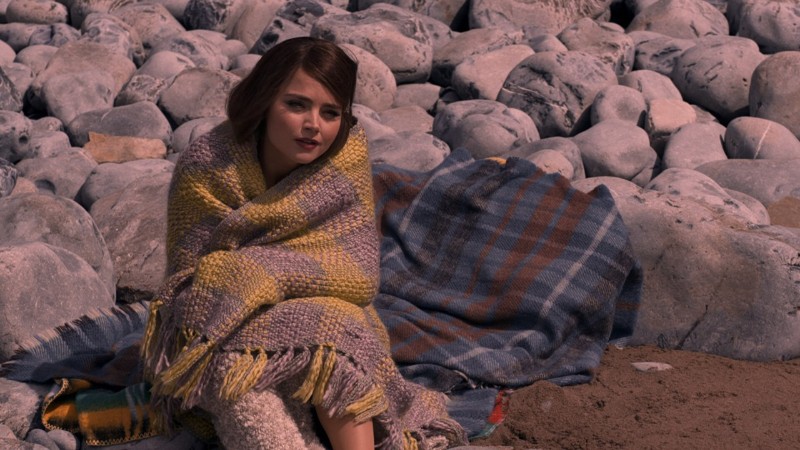 Clara's beaded dress from that episode has been one of my dream costumes for years, so when I finally got a chance to tackle it, I decided I wanted to include her blanket as well. Partially because it's a beautiful blanket and making it posed an interesting challenge, but largely because the hotel where the Doctor Who convention I go to is held tends to be rather cold, and Clara's dress provides very little warmth. Being able to wrap up in the blanket but still be in a screen accurate costume let me wear the costume comfortably for a lot longer.

I started by studying screenshots from the episode. The screen-used blanket is definitely woven, but knitting is much more my wheelhouse, so that's the route I went. Typical knitting has a knit side and a purl side, and while the stitches on the knit side make noticeable V shapes, the purl side looks more like straight lines, and thus more like a woven fabric, unless you really know your textiles. 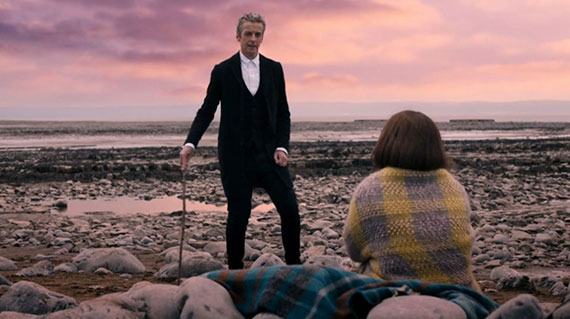 To make both sides of the blanket purl-facing-out, I decided to adapt a technique called double-knitting, but invert it so it's really a double-purl. This also let me swap colors for the plaid without carrying the yarn on the 'wrong' side, and let me hide my yarn joins in between the two layers. This resulted in a thick and warm blanket that is primarily lavender on one side and primarily yellow on the other, without either side looking like the 'wrong' side.

Once I had decided on the technique and knitted up a couple of test swatches, I had to design a chart to best mimic the plaid seen on screen. I looked closely at the screenshots and measured the plaid relative to things like Clara's forearm and the width of her back. I'm the same height as Jenna Coleman, so translating those measurements into what I wanted the final prop's measurements to be was very straightforward.

The yarn I chose was Lion Brand Homespun in the colors Golden (buttery yellow) and Satin (lavender flecked with brown). I've worked with this yarn before, so I knew its strengths and weaknesses going in, and the colors were the best match of any of the yarns I considered -- I haven't done any color correction on either the screenshots or my photos. Knitting it up on 6.5mm (US size 10.5) circular needles I was able to obtain my gauge, and then designed the chart to replicate the plaid around that. 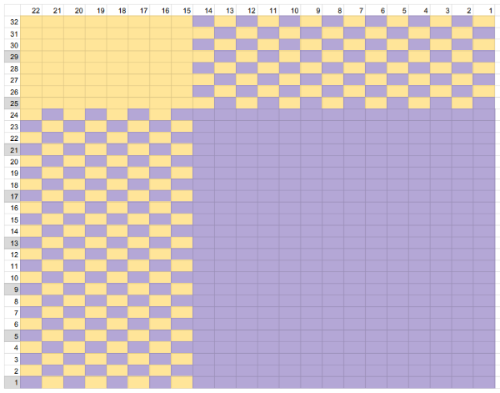 The chart I designed is 22 stitches wide by 32 rows long, and for the full blanket I repeated the chart 7 times in width and 7 times in length. With double-purl (or inverted double-knit, whichever is easier to think about), each of the stitches on the chart is really two stitches, one for each side of the blanket. So it's really 44 stitches in each chart repeat, 22 of each color. Including cast-on and cast-off rows, there are a total of 69,300 stitches in the blanket. 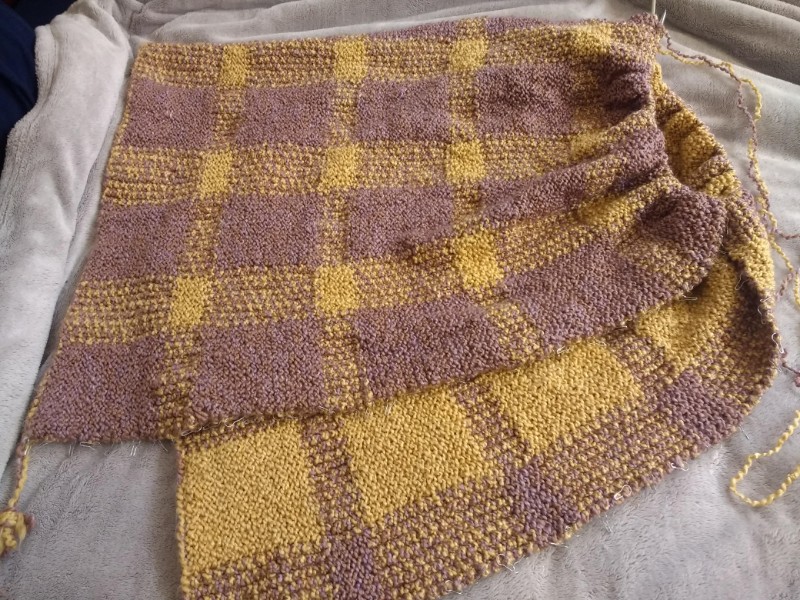 I started knitting the blanket in late October 2019, and finished it in early February 2020. I worked on it at least a little every day, some days just a handful of stitches, and other days I knit for hours at a time. I didn't keep track of my total time investment, but it's easily over 100 hours, probably close to 200 hours. Once I got to know the chart and built up some muscle memory with the double-purl technique, I was able to knit it mostly on autopilot, so I marathoned a lot of tv and movies while knitting. 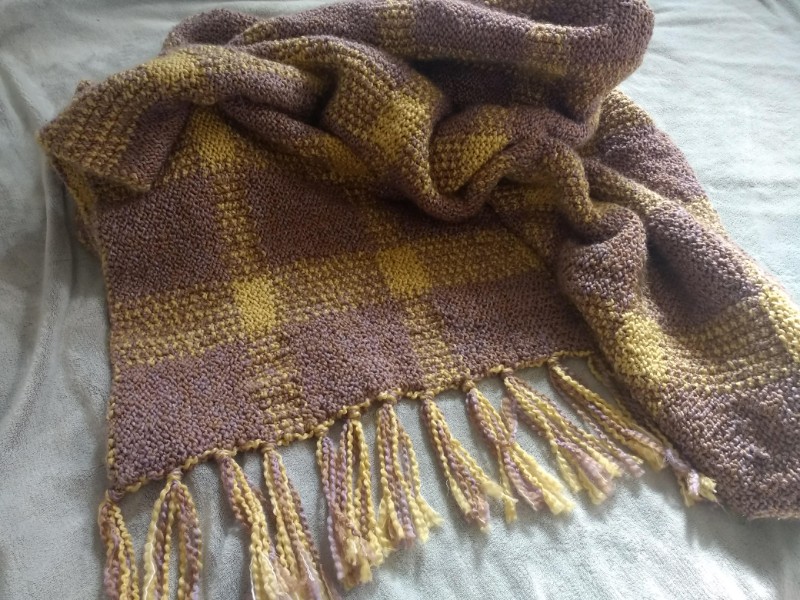 The finished blanket is 70" by 56", with 7" long tassels added along the knit edge after the body of the blanket was finished. There are 28 tassels on each side, 56 total. All together the blanket weighs a little more than 5 pounds, and is warm and thick, and very soft. 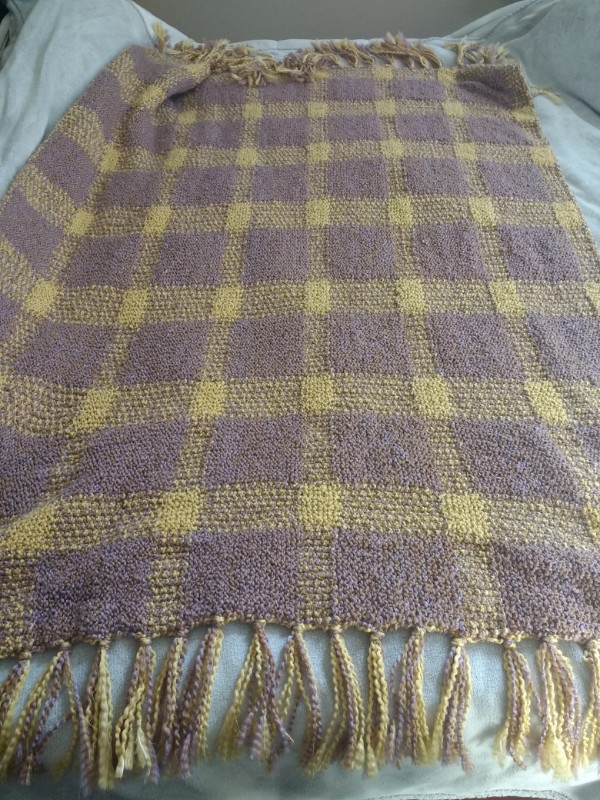 I debuted my Mummy On The Orient Express Clara costume at GallifreyOne last month. I purchased and modified the beaded overdress, and drafted and sewed the underdress, cut and styled the wig, and made the jeweled hairclip. As I had expected, the rooms where panels are held were far too cold for my taste, but wrapping up in the blanket really helped. The costume was definitely recognized by other Whovians, but I don't know if anyone else realized the blanket was also screen-accurate. Even still, I wouldn't consider wearing the costume in panel rooms without the blanket. 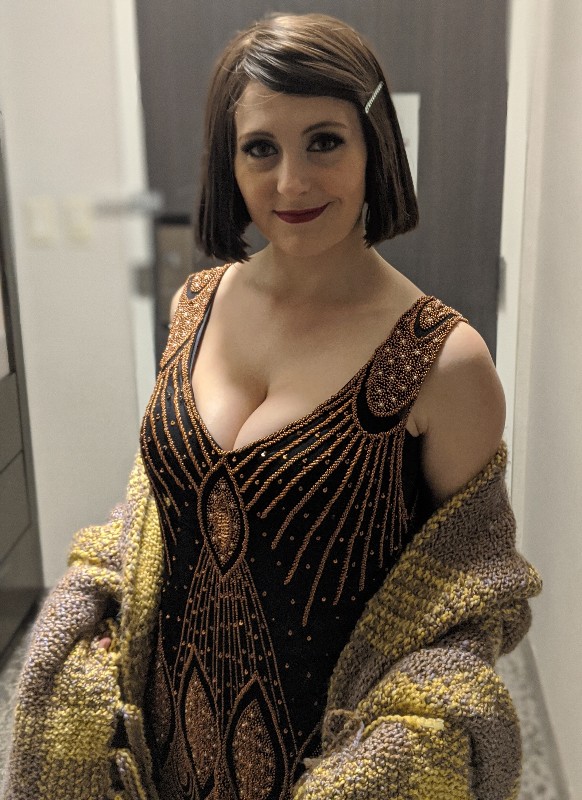 This is not the first knitting project I've done to replicate a screen-used item, but it was by far the largest. It's also the first time I've designed my own knitting chart, the first time I've double-knit/double-purled, and the first time I've knitted a plaid. In retrospect I might have slightly adjusted the width ratios of the plaid (made the yellow slightly wider and the lavender slightly narrower on the primarily lavender side) to be just a bit closer to screen-accurate, but overall I'm really thrilled with how the blanket came out. 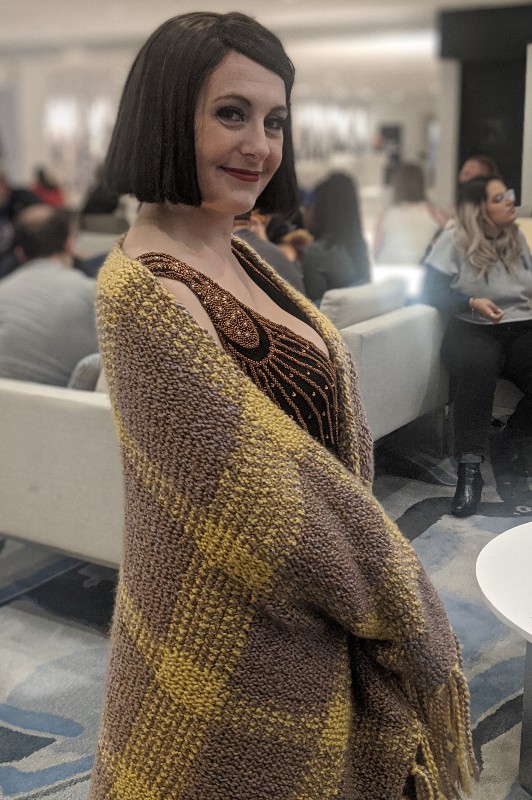 I don't plan to write this up as a full pattern that other knitters could follow, but I'm happy to answer any questions about the prop. I have a few more pictures in an album here, too. Thanks for reading!
B