RPF PREMIUM MEMBER
Disney claims that "real lightsabers" will be a part of the "Galaxy's Edge" expansion. I think I know how they're going to do it:


Multiple people have claimed to have already seen the "real lightsabers" at Disney and that the experience is "mind blowing." We all know a real lightsaber isn't technically possible... so how is Disney going to achieve the effect? Theoretically, if you built a lightsaber and housed a laser or a powerful and focused light source in the body (much like the "in-hilt tri cree builds you see on this forum) you could see the actual beam of light with some light atmospheric haze in the room - the same stuff used at basketball games, ballet, and theater. Some lasers have a "frame rate" or a gate, just like a movie projector. If you film a laser and sync the frame rate of your camera to the frame rate of the laser, you can capture suspended beams of light with a beginning AND an end. The catch? It's impossible to see with the naked eye, and can only be seen once you play back the footage. However, if a user were to wear a set of goggles with a frame rate SYNCED to the lasers frame rate (much like 3D goggles that go with 3D enabled TV sets) you could, in theory, capture the image of the beam of light... beginning at the emitter of the hilt, and ending about a meter away.


Add a great sound system, a rumble motor, and some atmospheric heat (much like the VR company "The VOID" uses) you could come up with a pretty convincing "lightsaber." In fact, I wouldn't be surprised if this is where our community goes after neopixels blades.


What do you guys think... any thoughts on how Disney is planning on achieving a "real lightsaber?"
Last edited by a moderator: Nov 9, 2018
R

It’s all smoke and mirrors

This just makes me more and more excited for this park. I can't wait to see how these work when the park opens.

If I had to guess how they work it would probably be like the lenovo jedi challenges like mentioned before.

I'm still hoping that someone does Star Wars laser tag... that would be awesome.

RPF PREMIUM MEMBER
I'm not going to speculate until I've actually seen them at work. Just popped in for a technical nit...

Neh. It totally is. Could build one today. Just with where we are technologically, it'd be enormous (like, think building), clunky, and feeble, and require at least one dedicated power plant to run it. Check in with me again after a few decades of amplification, miniaturization, and condensing. *heh* But always be wary of labeling something "impossibble". Impossible just means no one's figured out how to do it yet.
Last edited by a moderator: Nov 9, 2018

Something that exactly replicates what we see in the movies is, in fact, physically impossible. Like, literally, physics does not allow for it.

why would physics not allow for it?
J

RPF PREMIUM MEMBER
Well, I don't think light can be artificially "stopped" once it starts traveling. Atleast, that's been my understanding. It will stop eventually due to deterioration... but I think that happens over the course of many millions of miles.

If the experience at disney ends up being a lenovo sort of thing... I'm going to be really bummed out lol

I would recommend looking through more of the videos made by that very man, where he says, just off the top of my head and among other things, that turning on a lightsaber would generate so much heat that it would set you on fire, and getting stabbed by one would cause a (very gross) steam explosion. 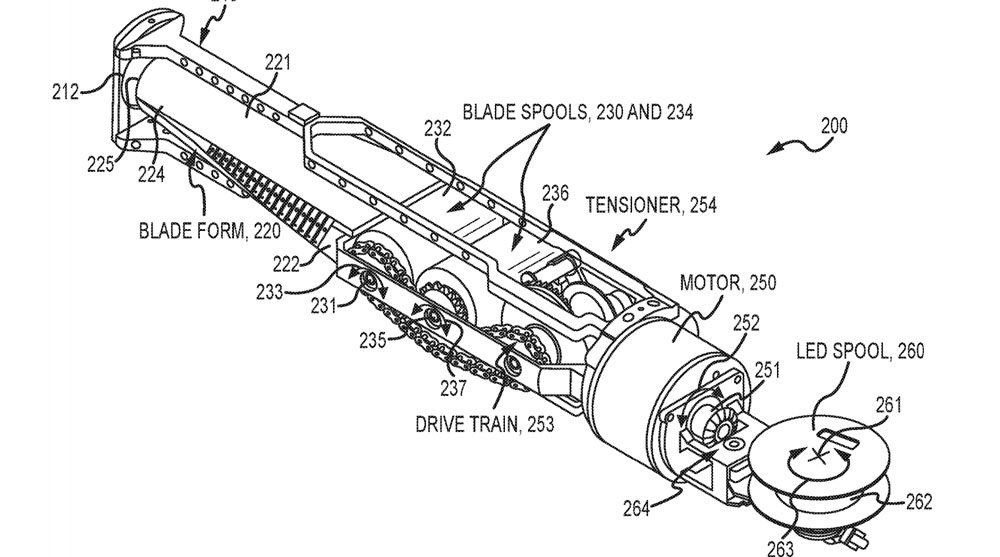 Huh. That's interesting. Which end is the front?

RPF PREMIUM MEMBER
I'm thinking the LED spool is the front end where, in the article, says the half-cylinder tubes envelope out and over one another. It's supposedly works like a tape measure, same principles, but I'm having a hard time figuring it being anything more for than show. An assembly like this is too fragile for any "dueling" and the interior leaves no room for sound. So I guess this is just a one and done gag.

It's just going to end up looking like a more expensive version of the telescoping roleplay Hasbro toy versions. I'll stick with the FX style.

That's crazy. But, from the looks of the patent, exactly how the Disney version works.

From the patent application itself:

So the front is 212 in OP's image.
The difference with that youtube channel is the led strip supposedly sliding along inside the tube.
I think the patent has been granted: #10065127
Oh boy, here comes a new toy collection... Or maybe they'll wait until episode 9

RPF PREMIUM MEMBER
What I heard was they were reserving the new "tech" specifically for actors in the parks and their live shows, rather than for public sale.
But yeah if you picture it as two tape measures offset. I'm guessing the two halves have a groove on the edges that help them "zip" together as they feed through the exit. Very cool. Can't wait to see it in action.

Yep, very interesting idea for sure

The Ultimate Guide to Lightsabers eBook
45 46 47

"You must pass on what you have learned." My son's first build: Fallen Order Lightsaber