So here are some sketches ive made during my long and boring work day. I have planned of buying and finishing costume before next autumn so ill have busy summer. Because i live in the northern Finland and im so far away from the other lair members, ive decided that my costumes code name will be deserter well if i manage to make my pred suit I would prolly be the only pred in whole fraking scandinavia :/ but here are the drawings and ill prolly post in this topic when i finally get my raw suit. And please tell me if you have any ideas what should an predator deserter look like. 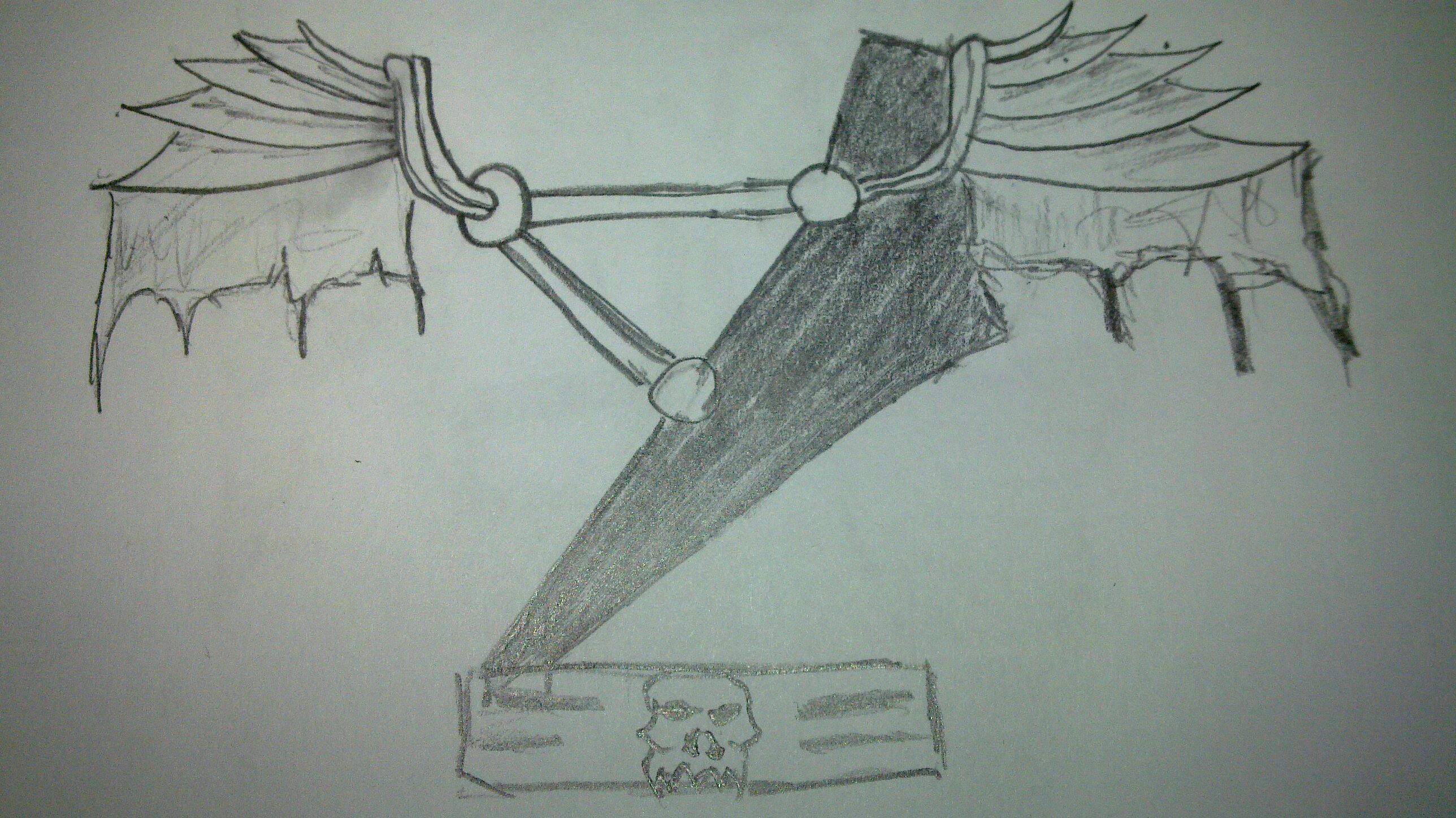 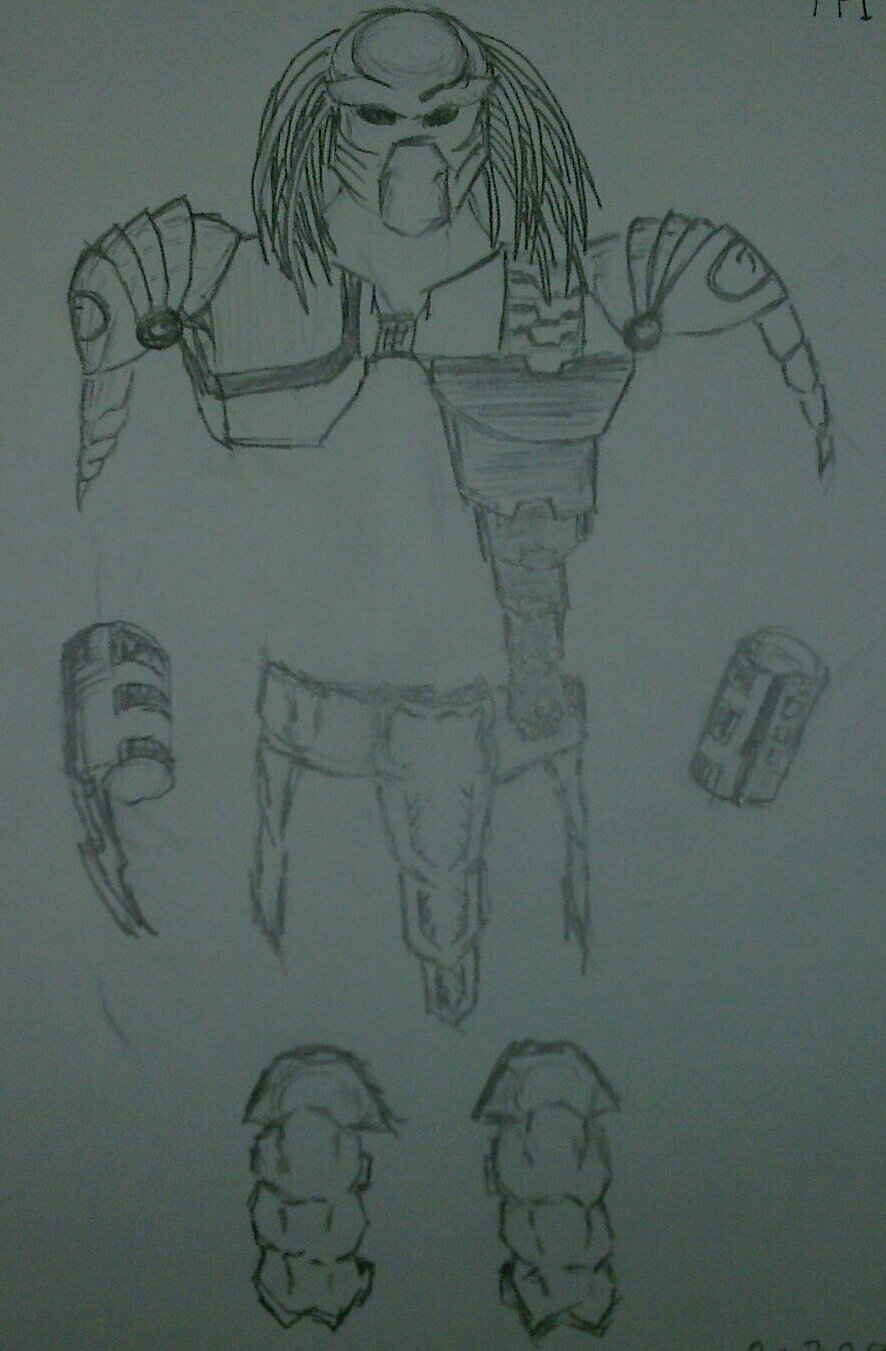 How a Hunter became The Deserter.

How it all began:
Its time for the new Hunters to prove they are worthy of the title. The youngbloods are on a scout ship headed for the planet, where they will complete their training and earn the title Hunter. Among the ships crew there is some whispering about the planets ferocious natives and what the youngbloods have to endure to survive. Some of the ships crew members think that its too dangerous to send the Youngbloods to a planet where even veteran Hunters would have a hard time. One of the crew members decide that it isnt right to send the youngbloods to certain death. He goes to talk to the Elder in the ship and asks him to take the youngbloods to a different planet with more suitable opponents. The Elder gets mad for the young Hunter and the Elder says that as long as he is leader of this expedition he makes the decicions and if the young Hunter wants to start making the decicions he should. He would need only to defeat the Elder and claim the leadership of expedition. Young Hunter realises that there is no reasoning with the old Elder and that if he wants to give the youngbloods a fighting chance, he would have to face the strongest fighter he has ever known and defeat him.
Elder doesnt wait for the Hunters reply but roars and charges toward the young fool who dared to question him. The fight begun with roars that echoed through the ship. The young Hunter was surprised but he managed to block the first strikes and managed to return few strikes. The fight was bloody but even. As the fight continued other crew members gathered to watch and cheer for the Elder. Young Hunter realised that even if he could kill the Elder the other crew members would challenge him and eventually kill him. He would die in vain and the youngbloods would be sent to their deahts. The combat continued for long time and both combatants were blood soaked and tired. The crowd was frenzied and bloodthirsty. By either luck or fate the young Hunter managed to hit the Elder in the neck and disorientating his foe. As the Hunter delivered the final blow the long fight ended as suddenly as it began.
As the Hunter stood over the defeated Elder, he looked at the raging crowd and knew that if he stayed he would die by the hands of his comrades. So he chose to save himself even if that meant running away from fight. He ran for the escape pod and launched it at planet where the youngbloods was meant to be sent. The others didnt follow. Hunter knew he had saved the youngbloods because the scout ship turned away and left the planet. Alone in one of the most dangerous places known the Hunter knew he had most certainly chosen a certain death over another but atleast he wouldnt have to fight more of his kin for survival.


I know I suck at writing but you guys just must live with it tongue.gif
Last edited by a moderator: Feb 18, 2015

Trust me, you are not the only one in scandinavia with a pred suit. I know 'Martin' here already has one, check his WIP.
As for your designs, looks good. Kind of buff like the AVP preds.

I drew some more stuff and i think ill now have the shoulder armors planned out. 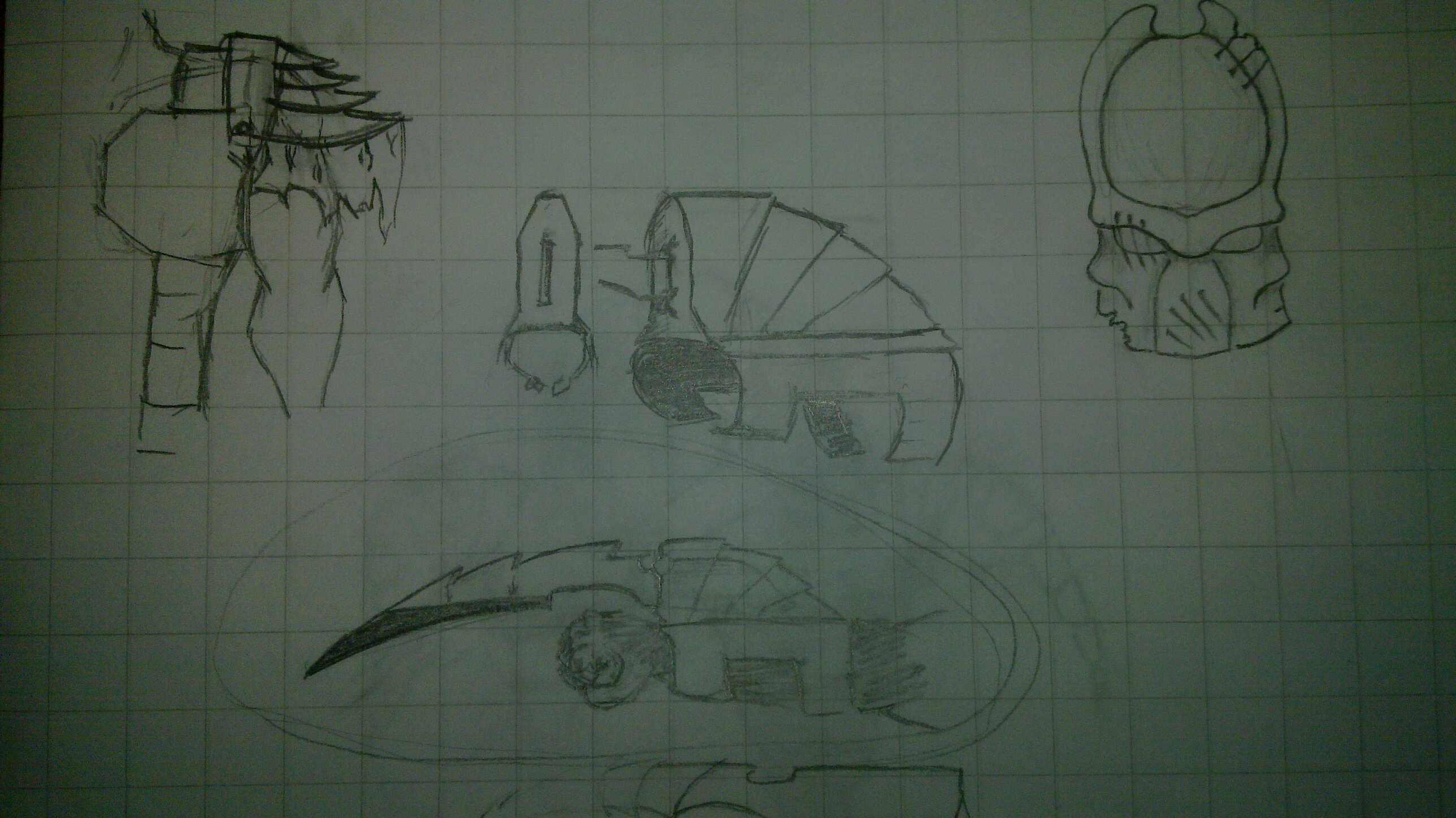 Arm blades start to get their shape in my mind also. Im glad i have these long boring work days so i can draw some sketches 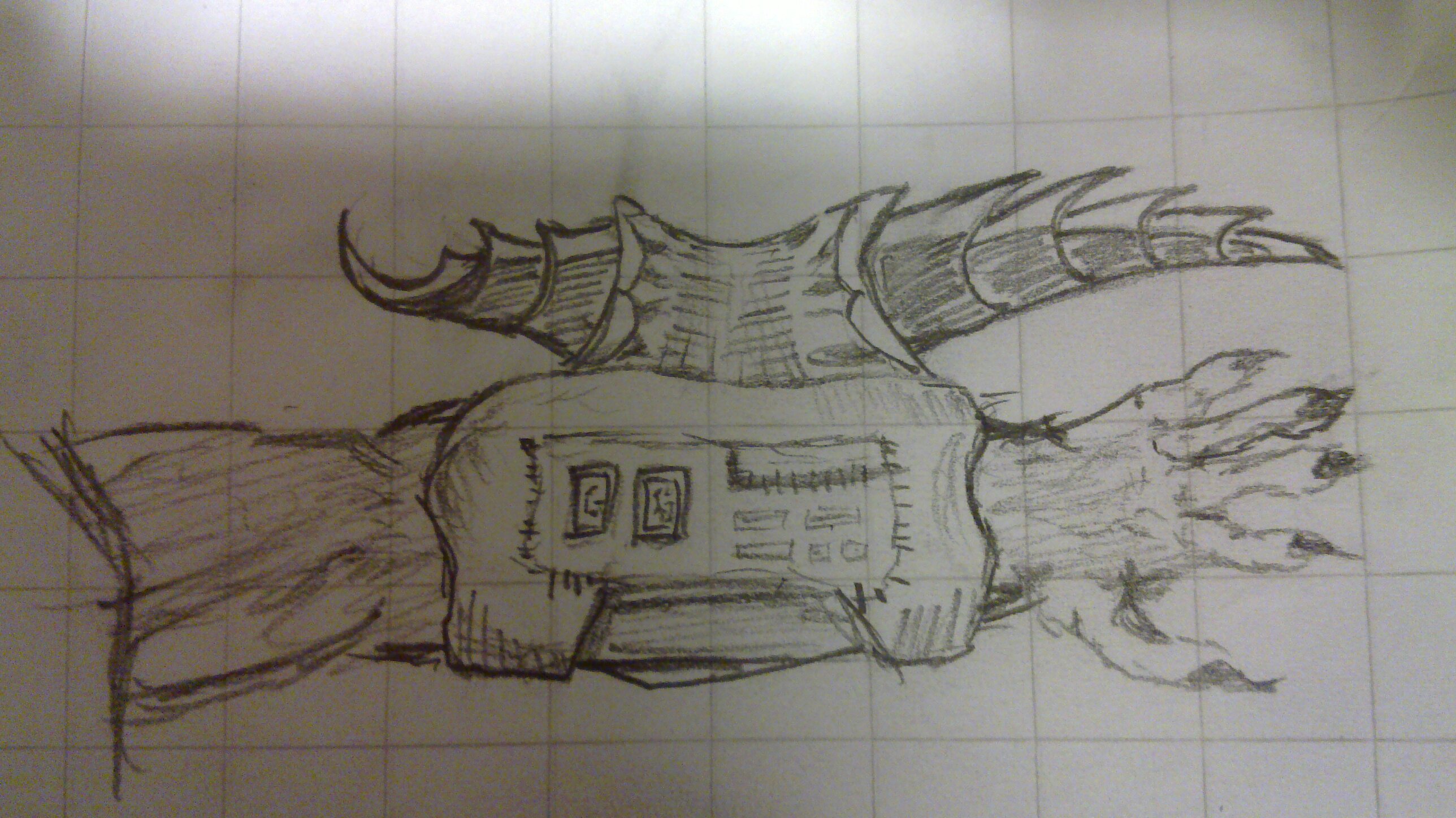 although dont know if im up for so rad arm blade
Last edited by a moderator: Feb 18, 2015

Still at work and now i have sketced the Deserters mask. Should really learn how to draw though. Note the tube that goes to mask. I planned to insert a camelbag in to the backbag so i could take a sip without removing the mask. Lazyness is the mother of all inventions 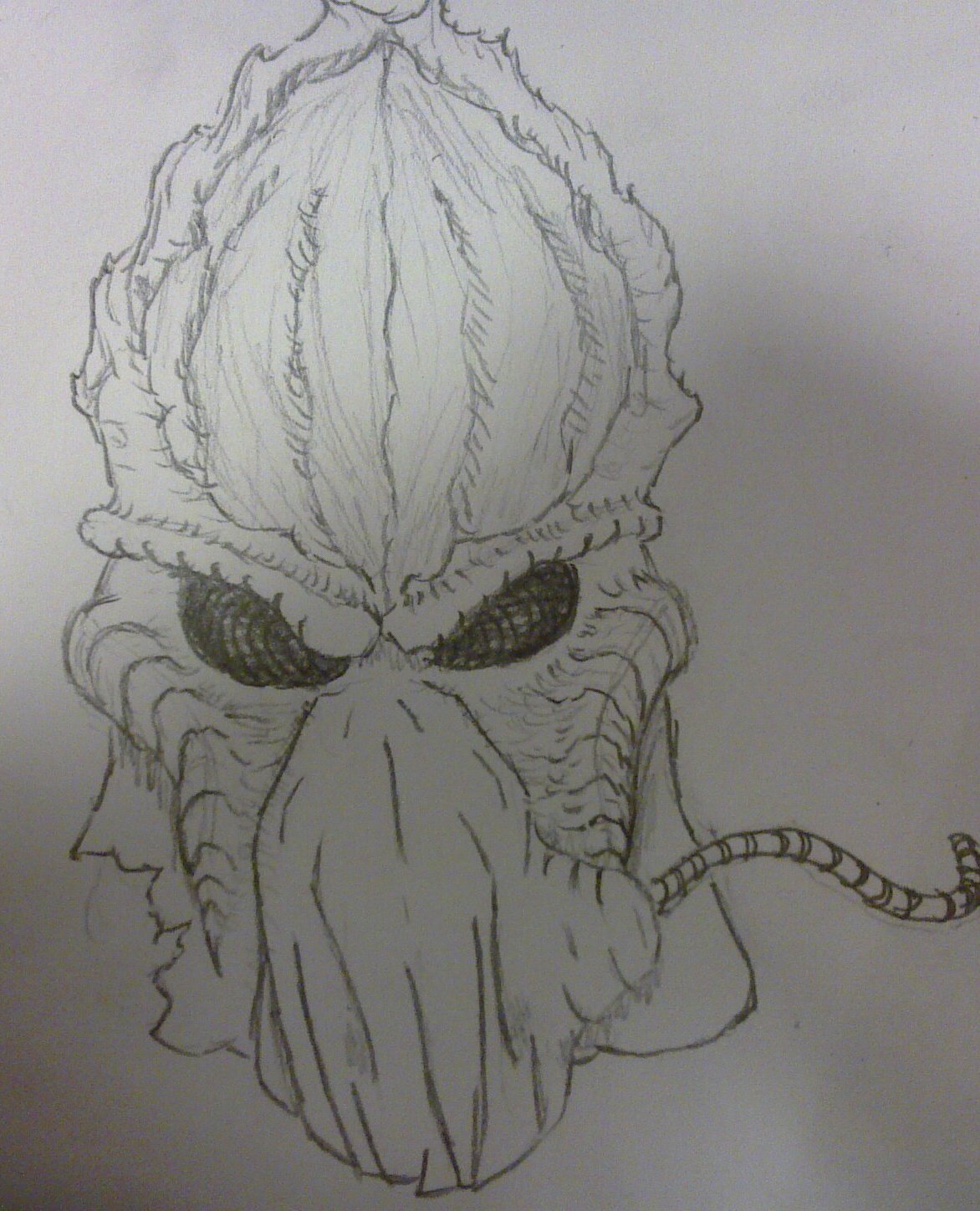 those sketches look great...gonna look mean when he's finished...I had the Idea of putting a camelbak in my med kit as well (im pretty sure everyone that has ever suited up has) lookin forward to seeing this guy take shape

To Boob Or Not To Boob, That Is The Question. (Sketch Idea Update... Please Opinionate!)
2