Screencaps in post # 2 and # 4 show a detective badge in silver. I am working on one of those as well. Here it is so far. Again, need to change the top banner and font, and do something about the center seal.

ah, you know what? I'm thinking of when Angel makes sergeant... that badge is gold

Good job so far Eltee. Strange that the center seal is custom made and it seems that might be the biggest hurdle in getting a good replica out.

I wish the show had better shots of the higher ups, but I haven't seen any. The only change is probably the gold color and the change of title at the top is my guess, judging from Debra's two badges.

RPF PREMIUM MEMBER
I'm getting a couple of blank centers. Hoping I can find someone to hand paint them. Pretty simple design. I have redone the upper panels to more closely replicate the screen used ones.

If anyone knows someone who can paint the 1 inch disks, please advise. I can pay or work out a barter for one of the badges & IDs. I MAY try doing the painting myself, but I'm no artist.

The most difficult part of replicating the IDs is finding suitable photos. For the actual props they dressed the actors in-character and had them pose without smiling, but have you ever tried to find a decent, straight-on headshot of an actor who wasn't smiling as they posed for the camera? I can tell ya' from personal experience, it ain't easy. By way of example, here's the Dexter ID I made (on the right) side-by-side with a photo of one of the actual props:

The flash lightened the color I used for the text considerably; in person it's a much closer match to the actual ID (I suck at photography). This was the closest photo I could find of Michael C. Hall and I had to Photoshop the blue background and shirt, and alter the shape of his hair. BTW, since this photo was taken I've refined the ID further--reworked the photo a bit and made the Florida seal "watermark" a little more accurate (it's not the same as the Miami Dade seal on the badges)--but you get the idea.

As for the seal on the badges, I would imagine they didn't use the state seal because "Miami-Metro" doesn't have state-wide jurisdiction. It does appear they tried to simulate the seal used on the actual Miami Dade Police Department badges though. (Oops, I just noticed Rabbit4x mentioned this in post #8.)
Last edited: Apr 22, 2010

Here's what I have so far:

I was able to correct the fonts as seen on the Detective badge, the one I used for Officer was too big.

The seal is still the challenge. As you can see, the closest one "in stock" is only somewhat similar. On the Detective shield, I used a blank seal in hopes that I can get the seal hand painted. It is not a complicated seal.

I think I have sourced the screen accurate case. The ones I have here are the eBay ones, but if you look at this screen cap you can see that it is recessed for the shield. I'll get the case I THINK is screen accurate and post pics.

I have to resize the card and add the hyphen to make it more accurate.
Last edited: Aug 7, 2010

I too would REALLY like to know if you can make others. Let me know. I sent you a PM as well.
C

I have to resize the card and add the hyphen to make it more accurate.
Click to expand...

So what did you do for the seal?
F 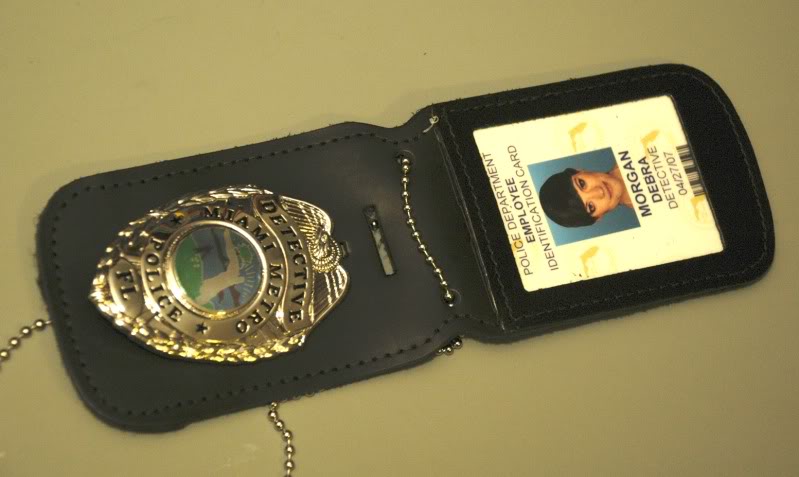 I have to resize the card and add the hyphen to make it more accurate.
Click to expand...

Do you still make these?

frenzy said:
Do you still make these?
Click to expand...