I also made a larger thermal exhaust port tile. The port is exactly the same as the first one I made, but it has a larger surrounding area with extensive panel lines. 40mm x 40mm. 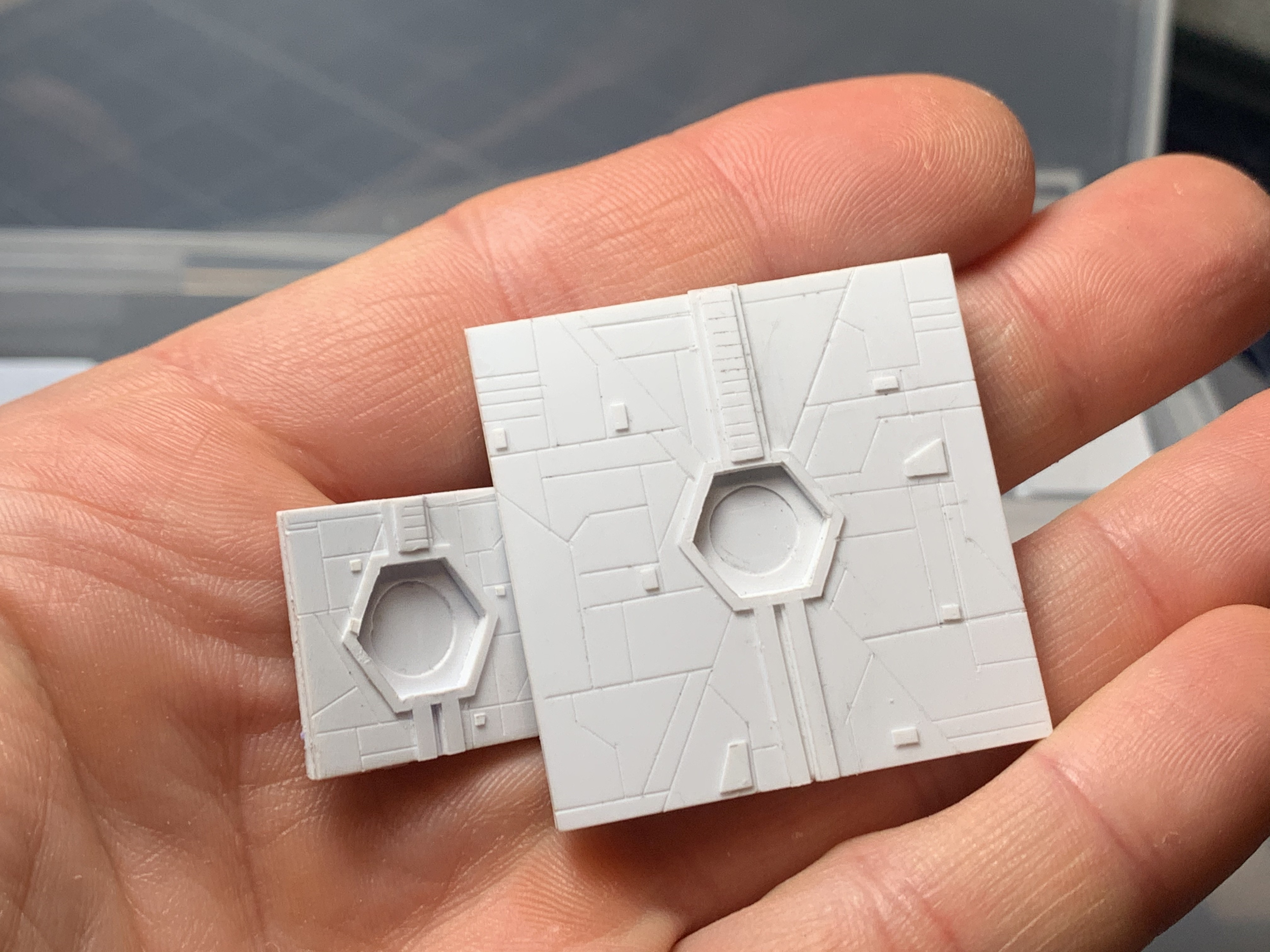 And, finally, I made a test assemblage of a few tiles, a tower, and some sub-structure made from leftover sprue bits and offcuts, primarily. Painted Tamiya red oxide primer for the substructure, and grey fine surface primer for the tiles. Still to add the cannon to the top of the tower, paint a few panels differing shades of gray, and do a panel wash - just a quick prototype.

The TIE Interceptor is from the Wizards of the Coast Starship Battles game - it's about 1:350 scale.. 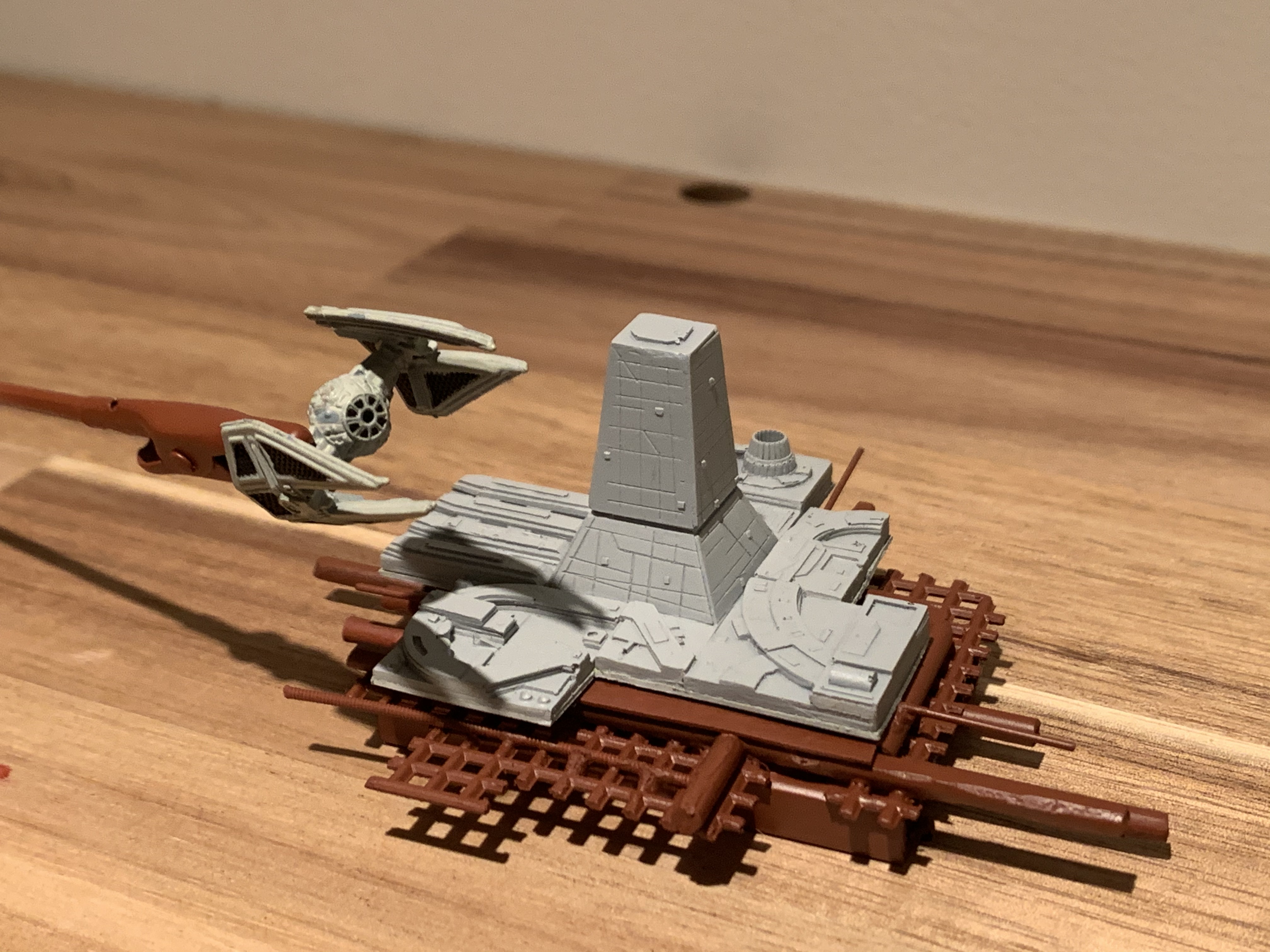 And that's all caught up! I'm still detailing the next batch of tiles - will probably mold them before the holiday weekend is over. You can also follow on my instagram -- instagram.com/monsterpartywars but I'll keep posting more detailed progress here.

Yesterday I set up and molded the second batch of tiles, turned out reasonably well. Not going to win any awards, but it's good enough for my purposes. I'm actually curious how casting these would turn out using the plaster I use for terrain in the Woodland Scenics molds. It's lower viscosity, has a longer working time, and sets reasonably hard (although it does fracture more easily than resin). 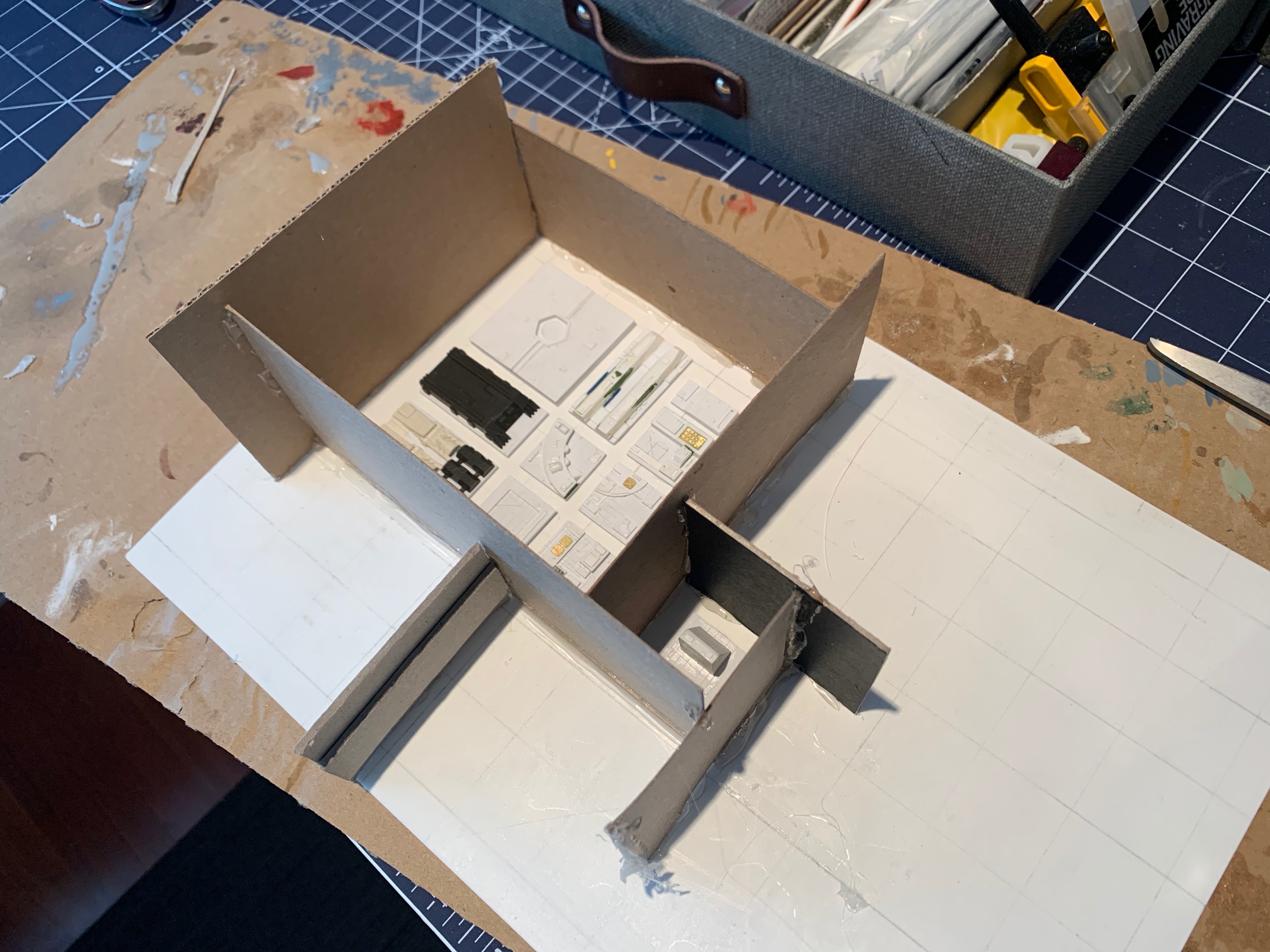 First pull from the mold: 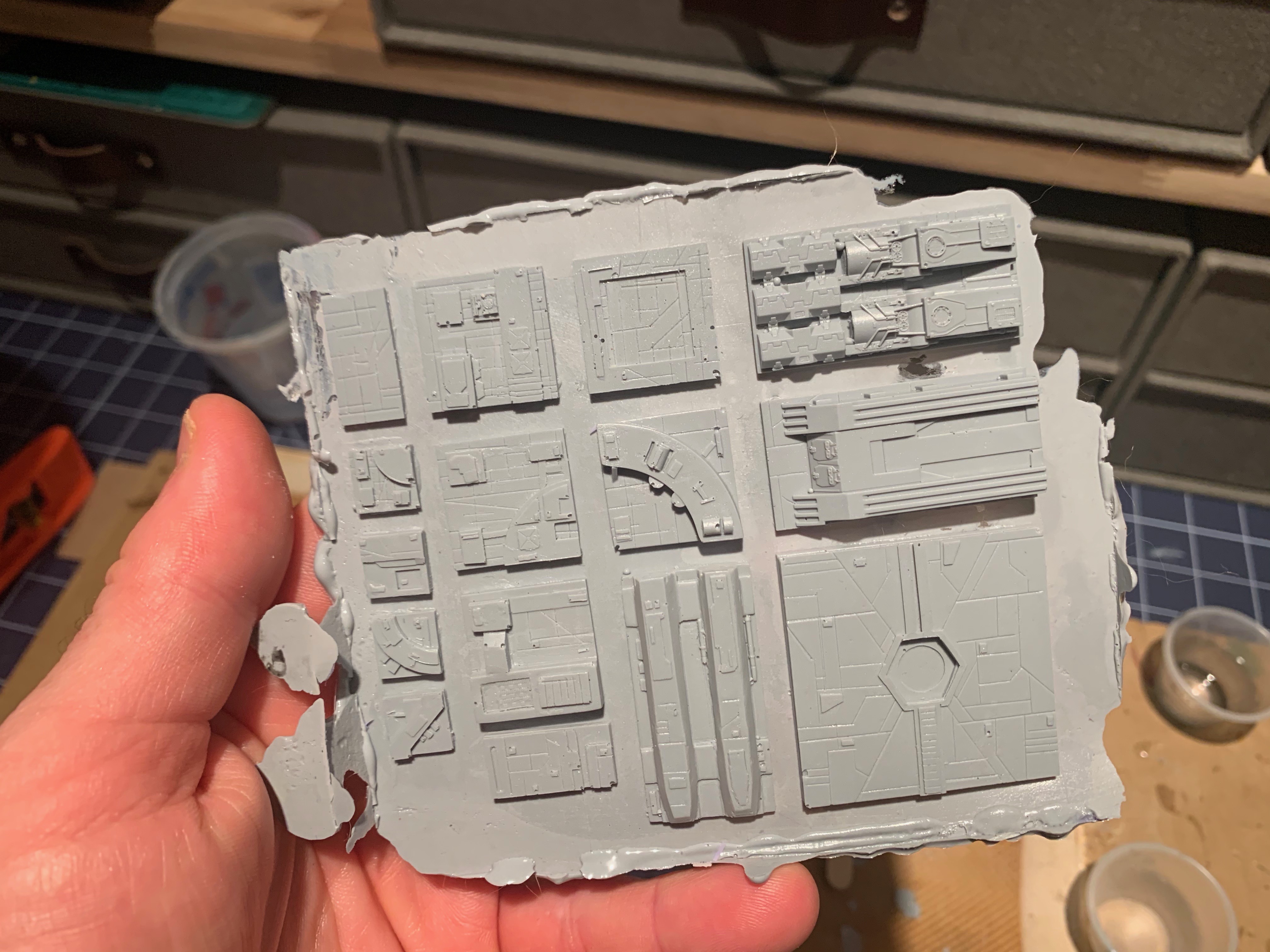 For anybody wanting their own set -- I'm also taking the digital models and making them printable. Adding in additional detail to replicate, digitally, what I originally added by hand with random bits of styrene (or approximating it, anyway - SLA printers are amazing, but I don't think they can *quite* replicate the fine panel lines you can scribe by hand yet).

I'll post in this thread when the STLs are ready for someone to test print (I don't actually own a 3D printer). 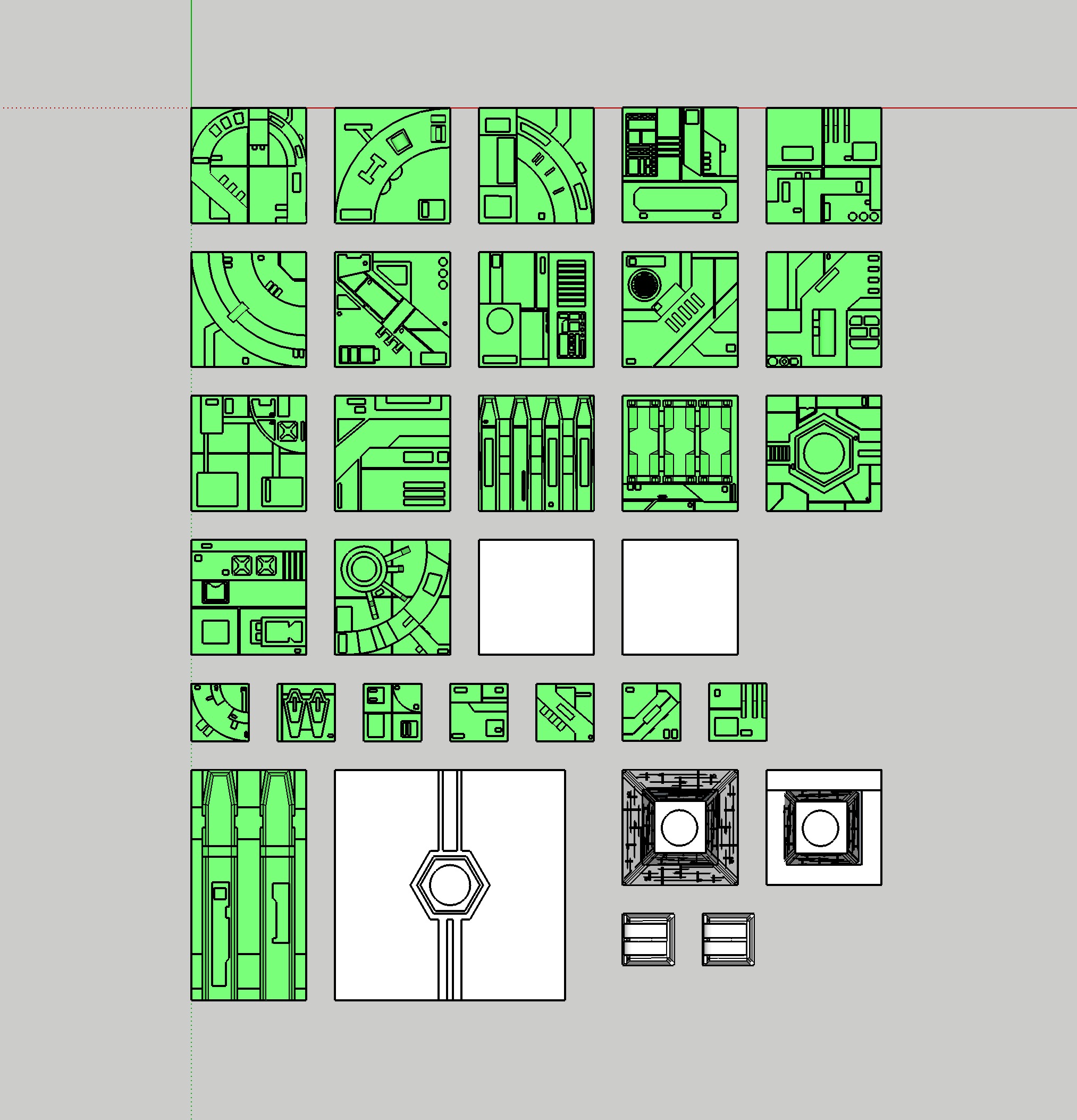 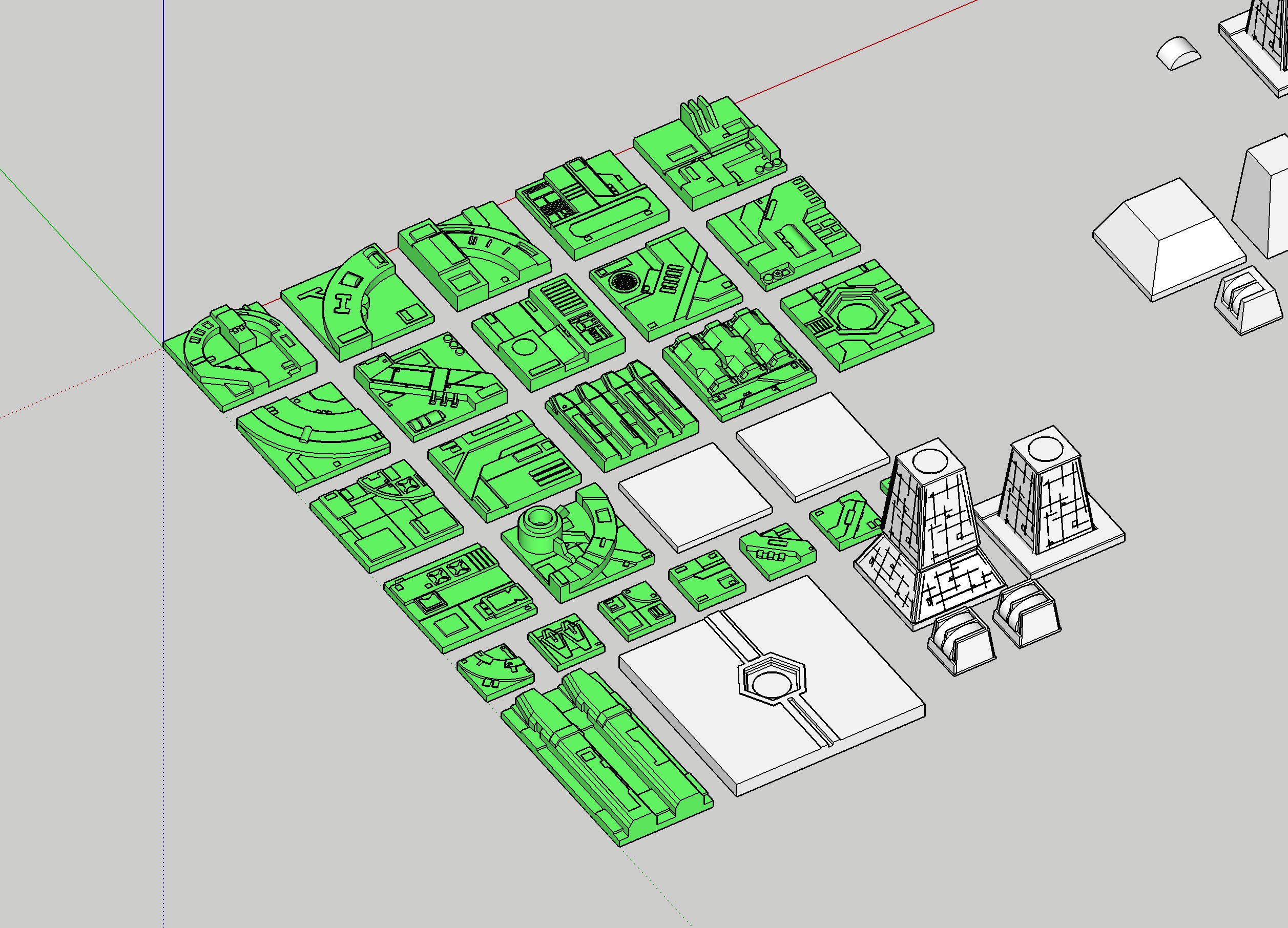 Ah, they are adorable! I love tiny stuff!

I see no reason not to make a whole death star...how big could it possibly be...

Duncanator said:
Ah, they are adorable! I love tiny stuff!
Click to expand...

Thanks - me too! I just love the tiny models. I currently only have one build larger than 1:144 scale

Fantastic. Look forward to the .stl. Slap these guys on my photon.

Well, while I'm waiting for some materials to arrive (and some tiny ships to blow up), I've been working on the digital tiles. I've got each individual tile to pass printability checks, but it's taken quite a while of tweaking to get all of them on a sprue to pass the same checks. FINALLY got it!

(this is the printing check on 3dhubs.com, btw) 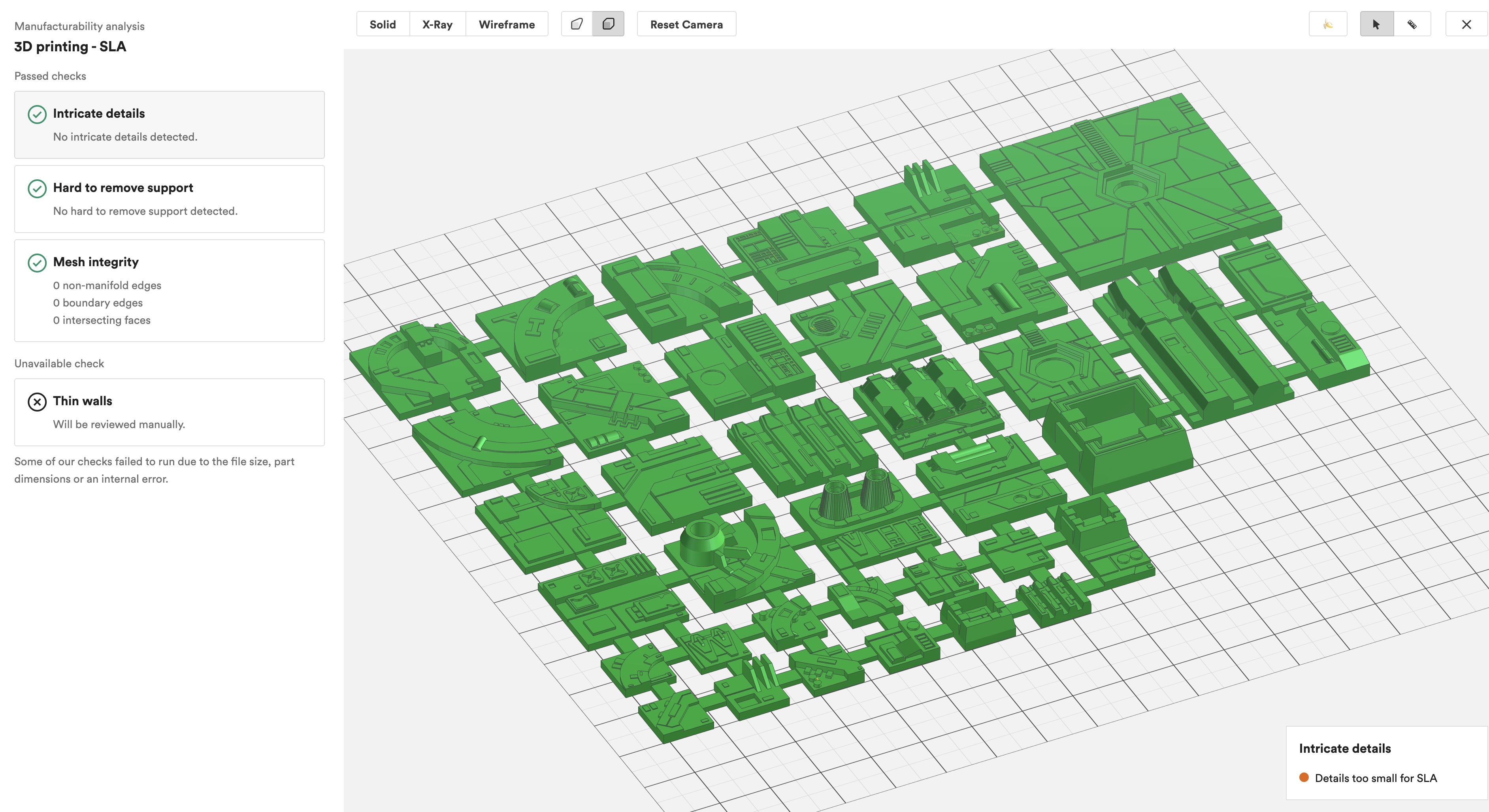 One more printing check -- the full set was too big for a Form 2 or the smaller Photon, of course, so I chopped it up into four sets of tiles. I may not have a Form2 (alas), but their software is still quite useful for checking printability. 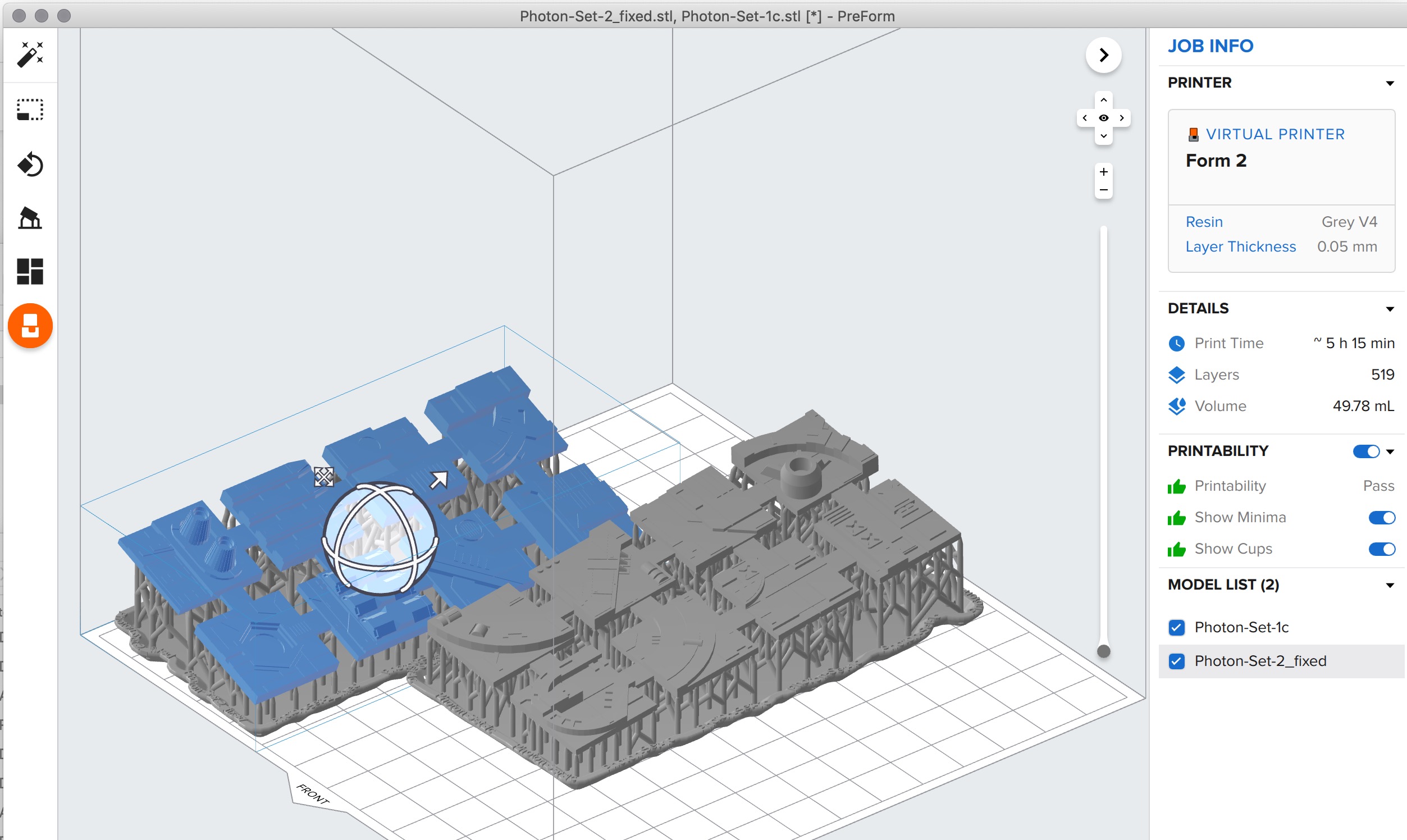 Made a lot of progress today on the support frame for the trench run. The version of the trench I'm making is my own concoction taking elements I like from the different trenches that were built for ANH and elsewhere. Obviously, the recessed area isn't canon.

Here's the current frame -- all hand cut from .060" styrene, with some square Plastruct tubing so the tiles can sit cleanly: 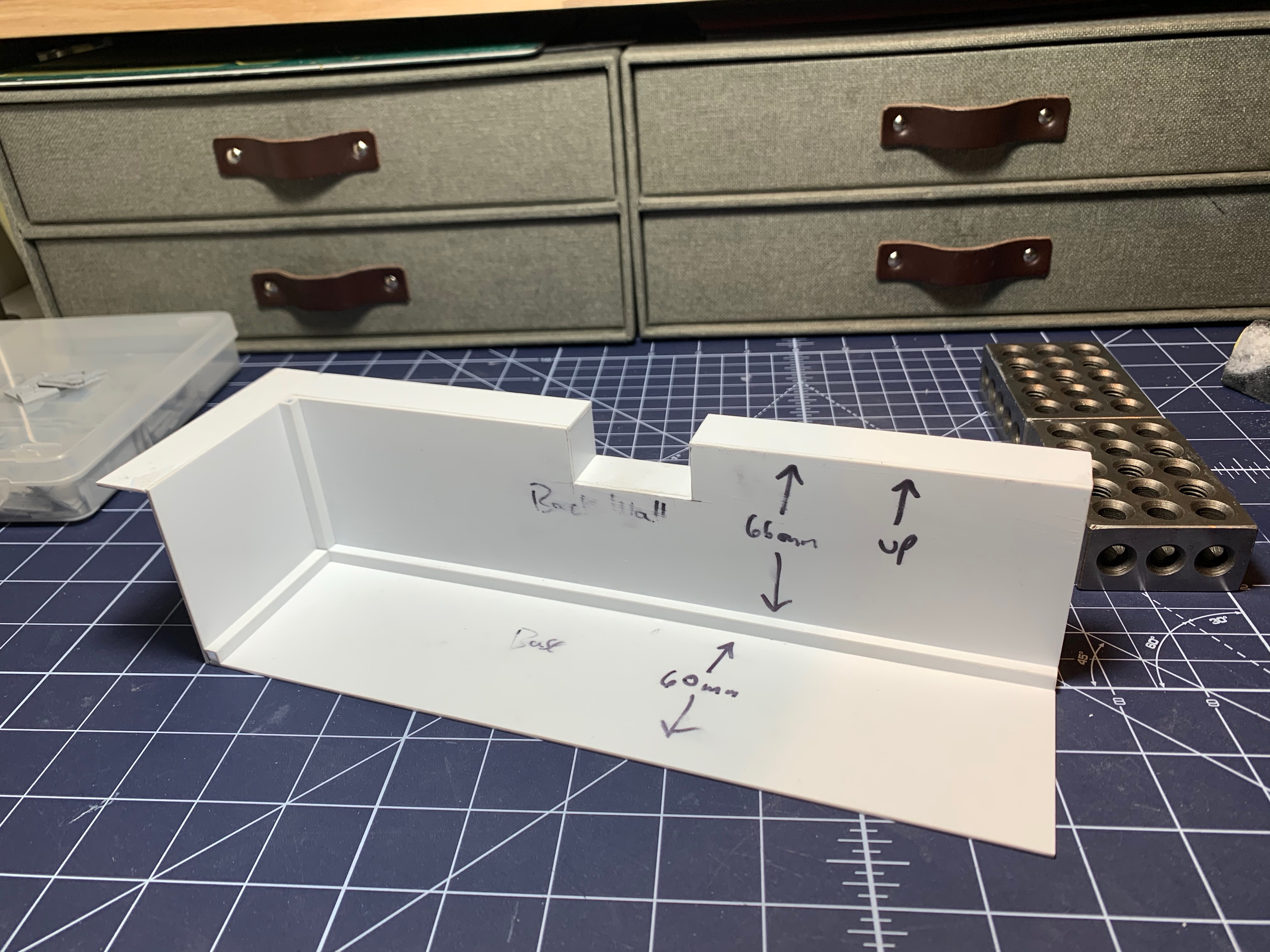 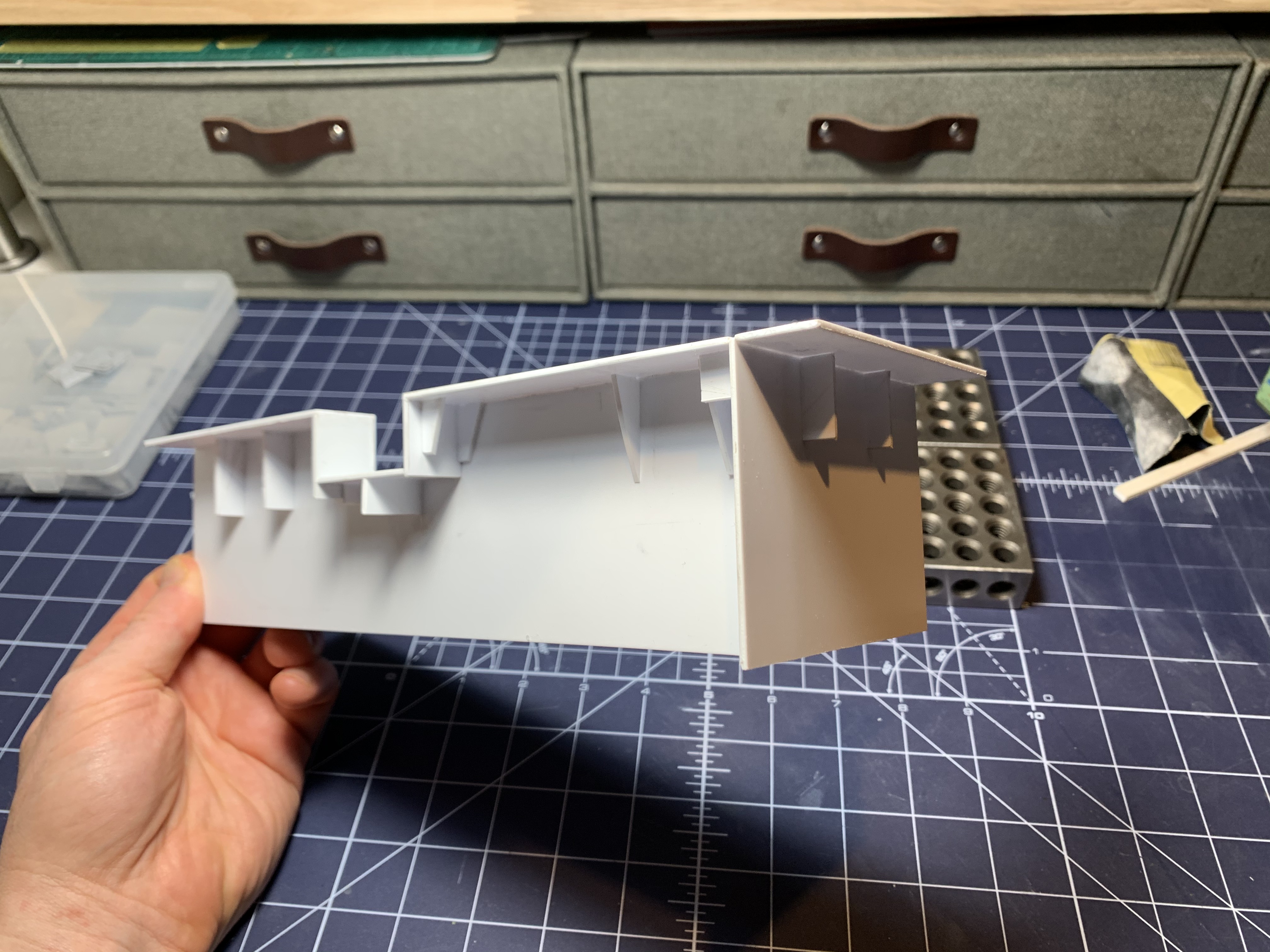 And the digital mockup, which is how I plan what to cut for the frame: 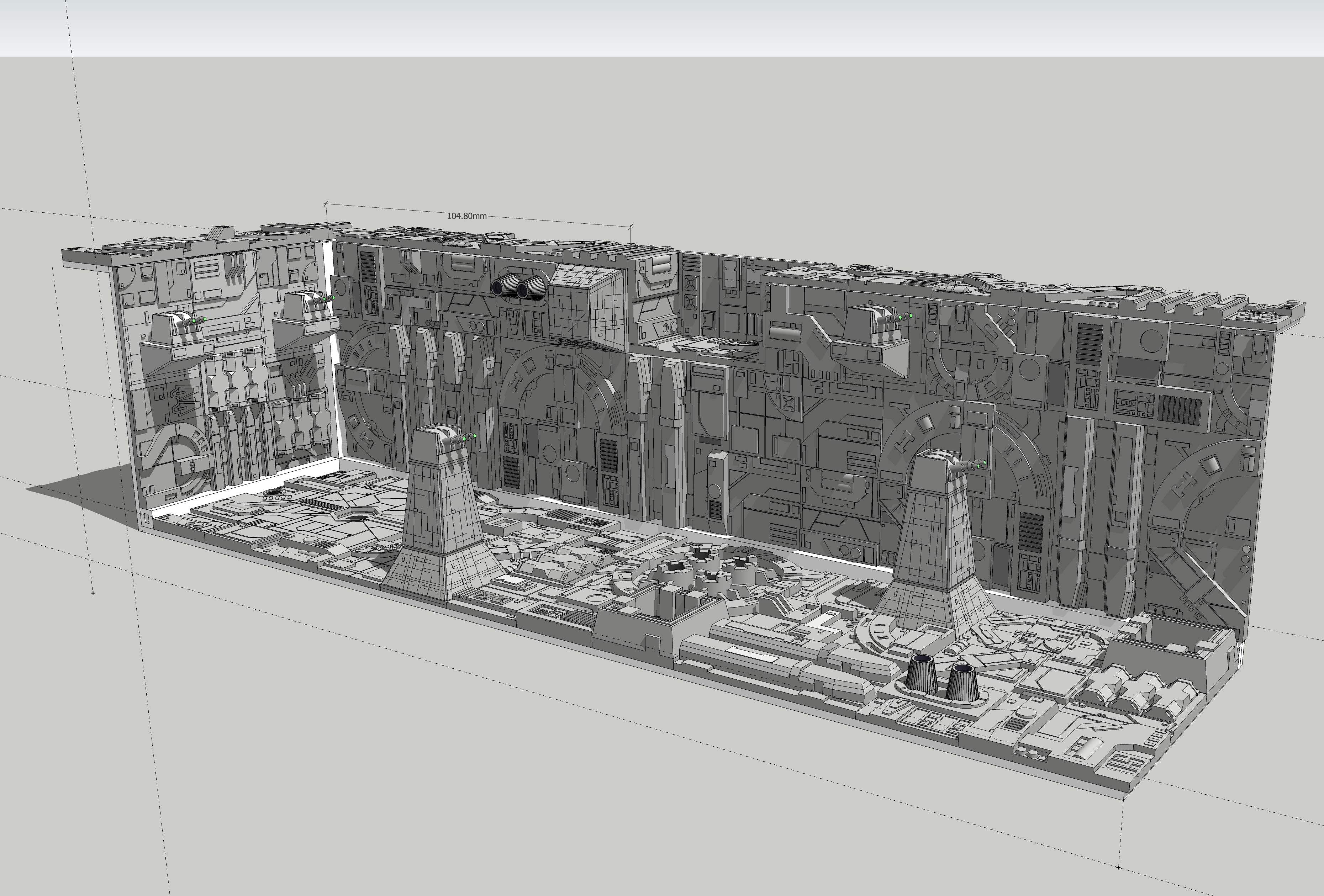 And a test fit during assembly to make sure the pieces line up perfectly with the tiles: 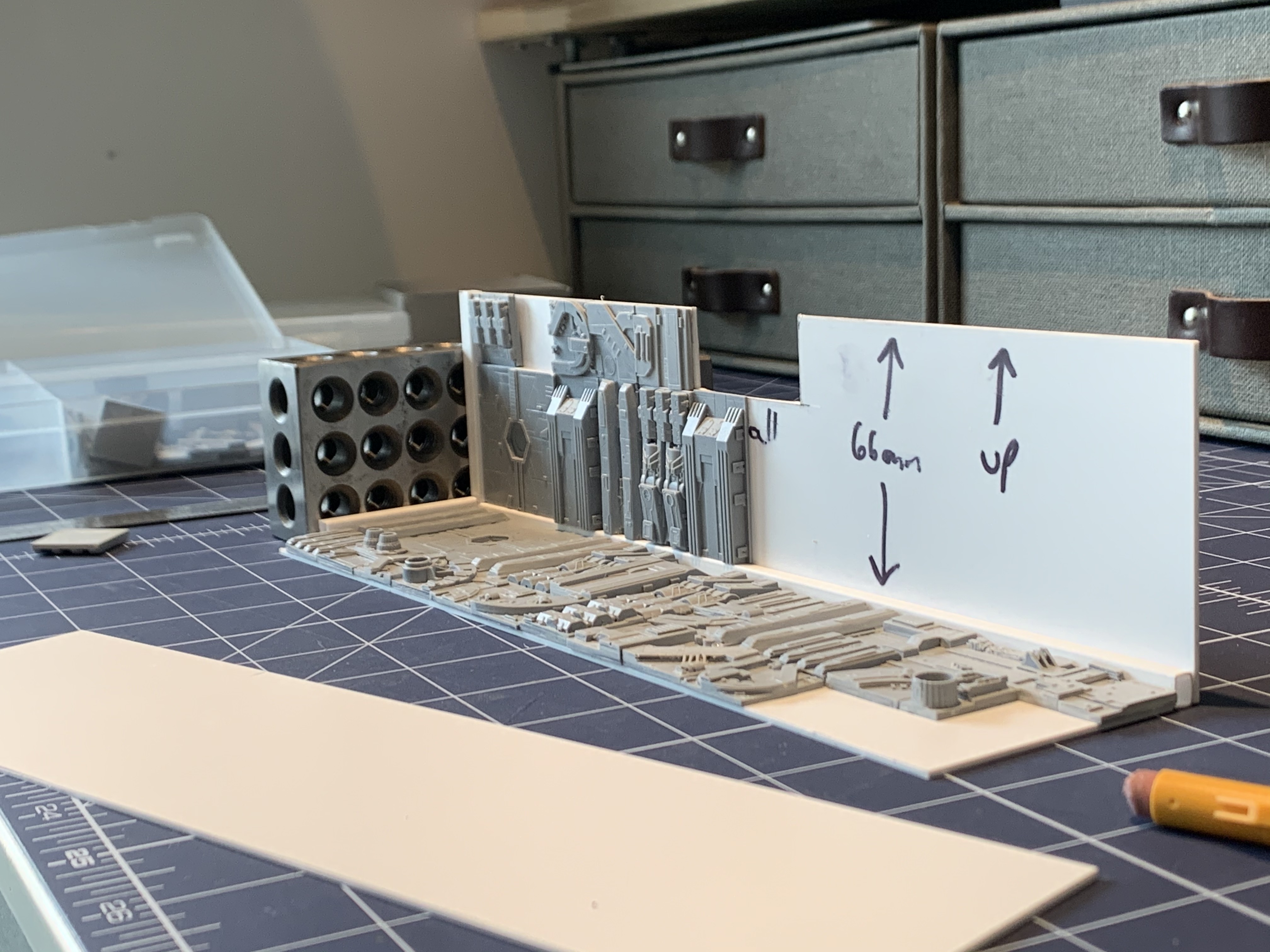 Pretty pleased with this alignment! 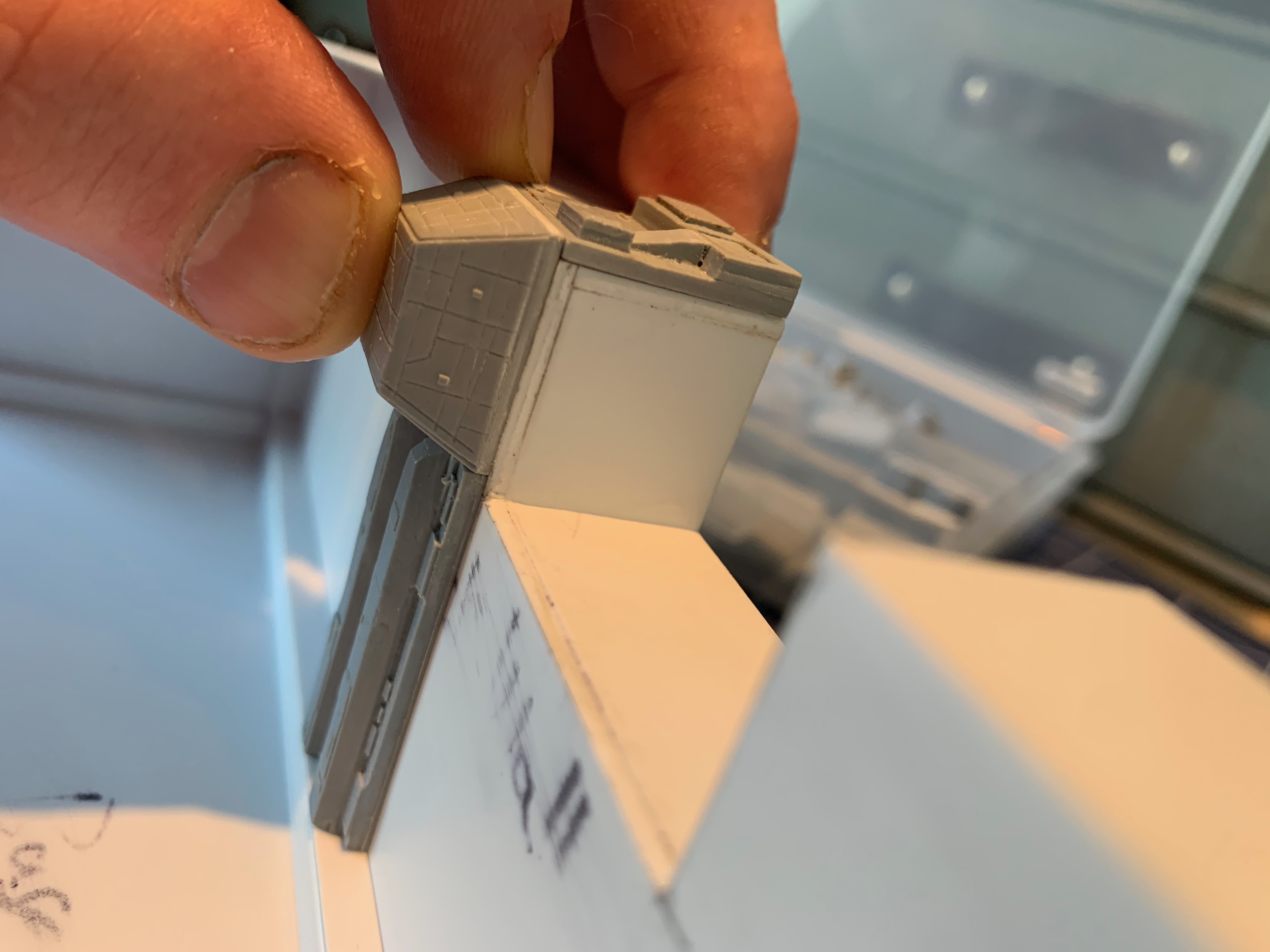 I just finished processing and uploading the first set of STL files for printing the micro tiles. You can download a ZIP of all of them directly from my site, or from Thingiverse:

If you attempt to print these, PLEASE send me feedback! I've ordered a set printed via 3dhubs.com, but I don't have a printer of my own, so they are as yet untested.

OK, while yesterday I mostly got the digital files prepped for upload, this evening I went back to working on the trench support frame. I'm quite pleased with how it's been going, for the most part. It's made out of .060" styrene, which is very nice to work with - it's entirely hand made. While I've mocked it up on the computer to get a rough idea of what to do, there's been no cutter involved - just a knife, a straight edge, calipers (these have been critical!) Tamiya Extra Thin, and the machinist's blocks to keep everything square.

As I've seen how well the frame goes together, my ambitions....have grown .

While I was first just going to have a basic three-quarter trench (just the bottom, end wall, and one side wall, I'm now building something with sub-structure as well (which will hide the battery pack for the LED lighting), a top surface of tiles, and a removable second side wall. This will make it displayable in several ways (including vertically -- it stands up quite nicely on a shelf).

To explain better, some pictures:

First. here's the main three-quarter trench part, with the top surface as well. (the cutout will eventually have a back wall). 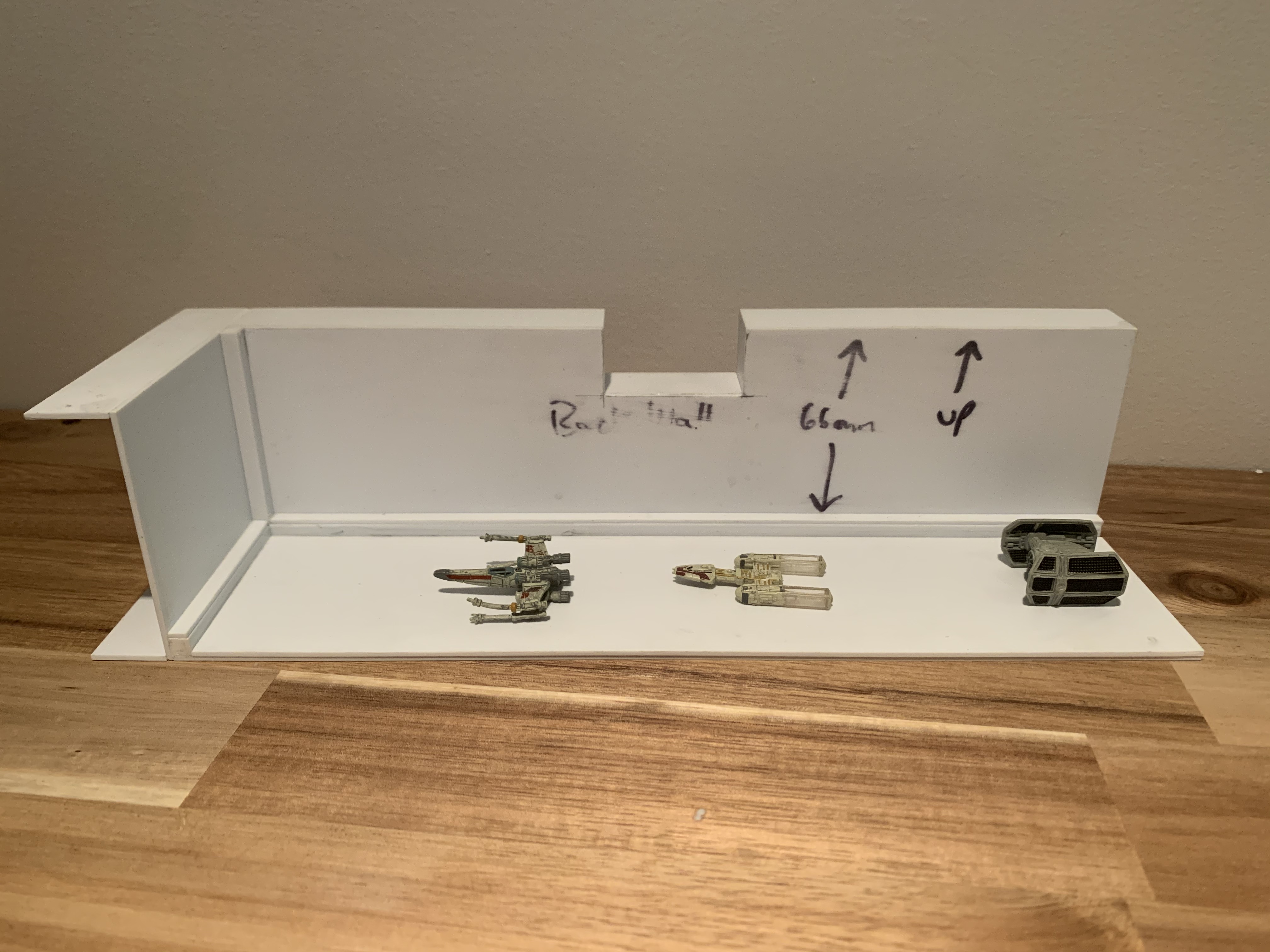 Here's what's now a full trench, with the second side wall and surface that lines up with it: 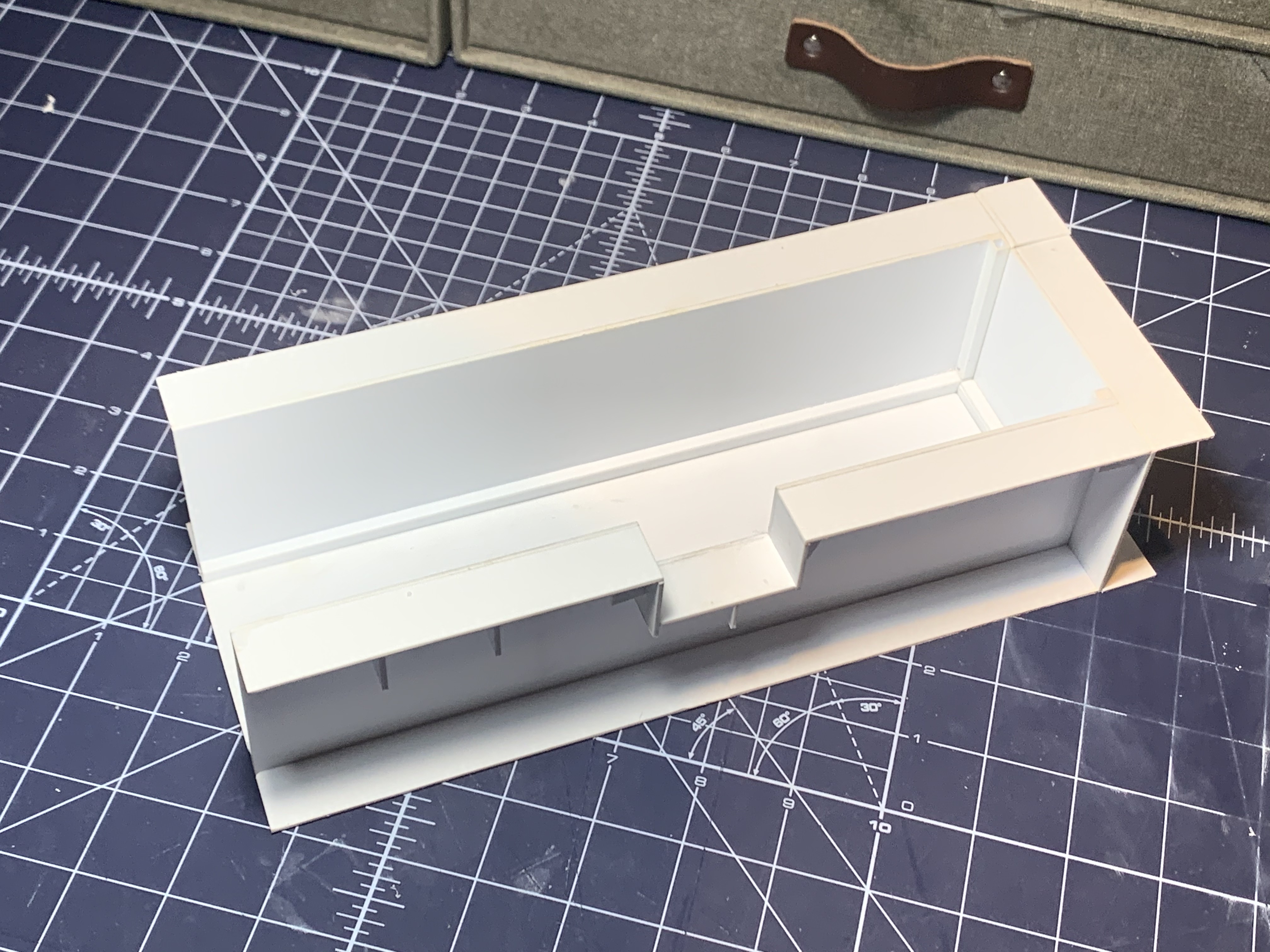 Naturally....that's going to be removable. 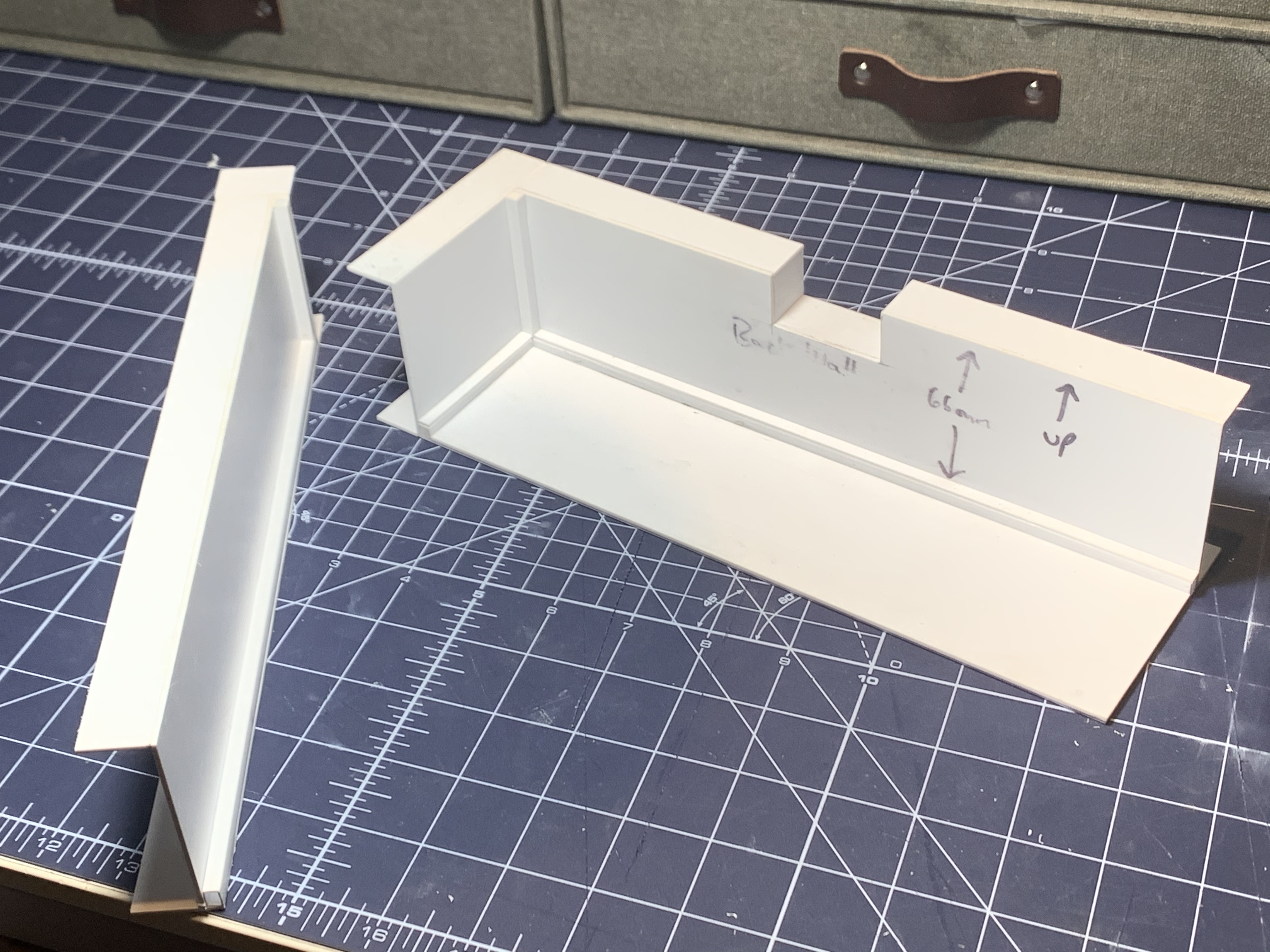 I'm going to build some sub-structure on both sides, with some magnets to attach them together, and channels for alignment. Here's the possibility for displaying it vertically: 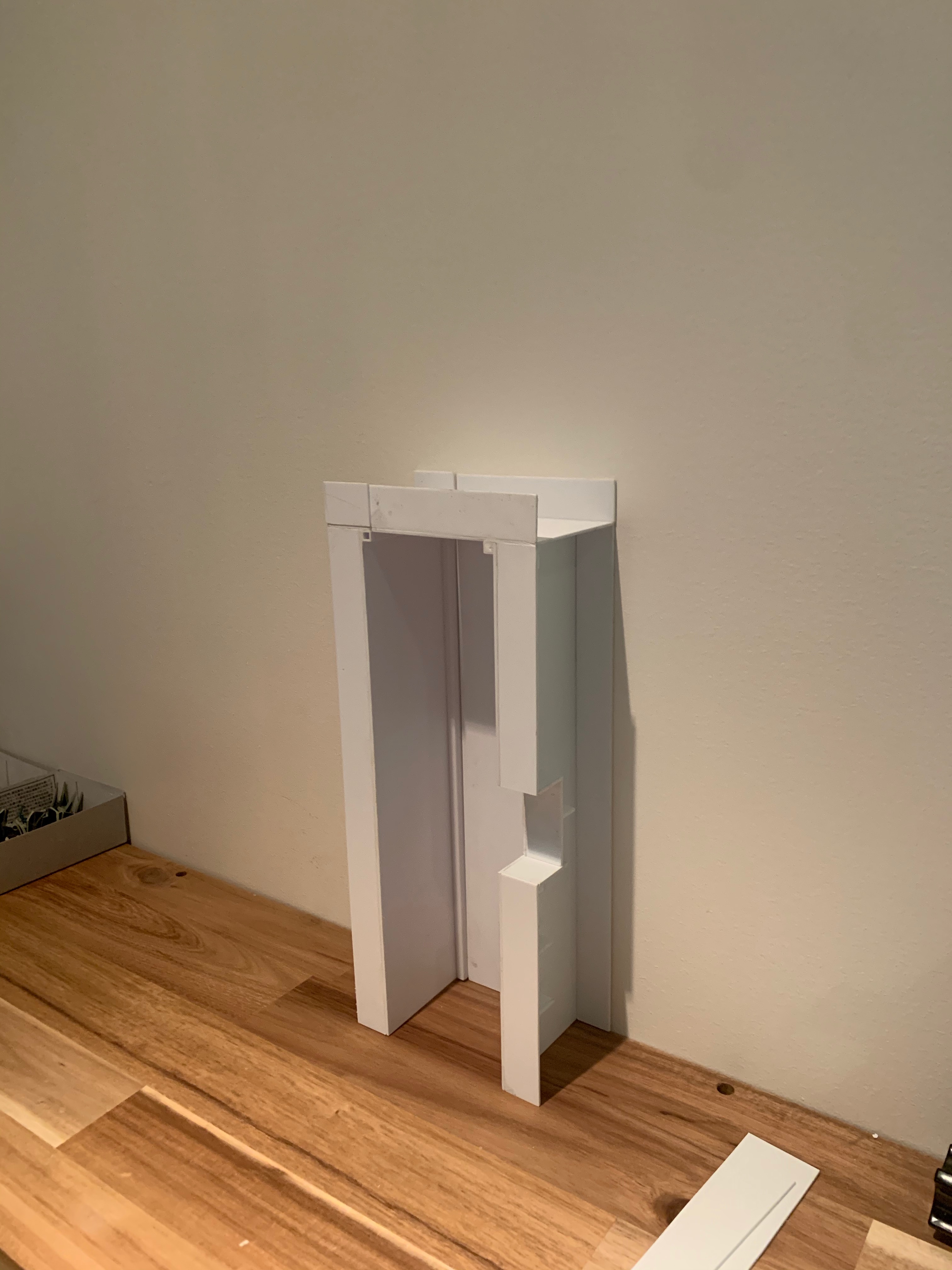 And looking down the trench - this should make for some fun photography when it's done. 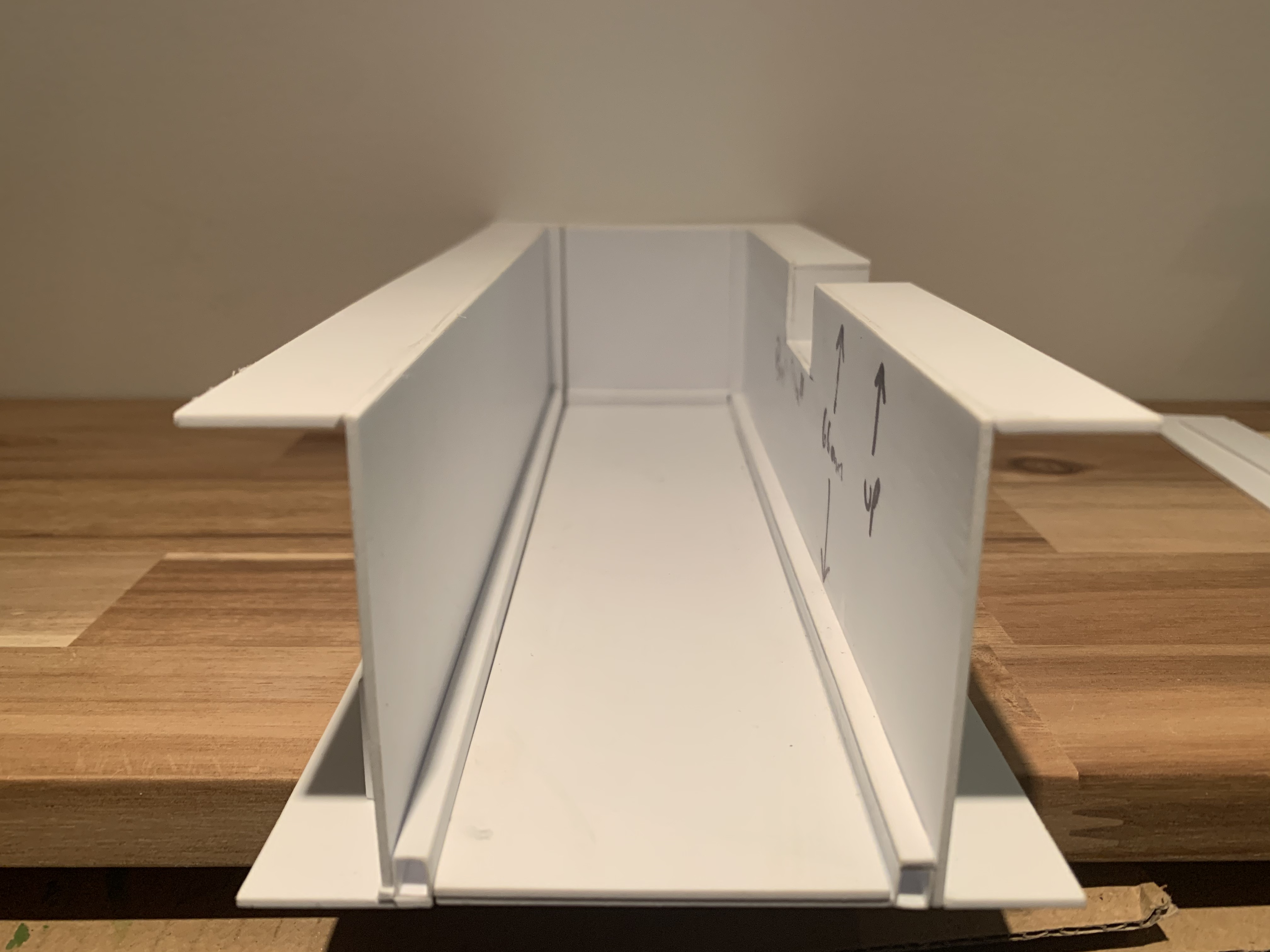 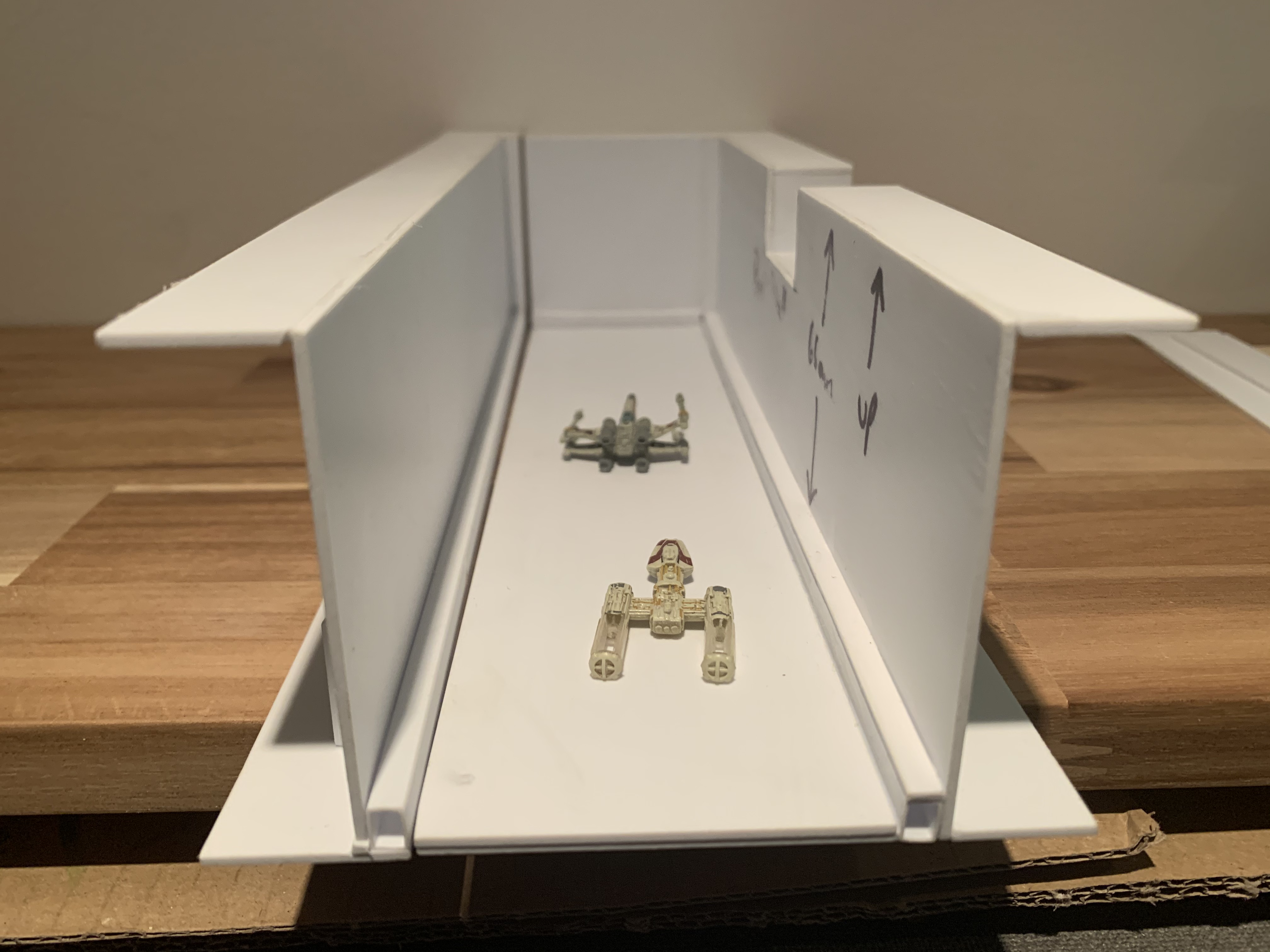 I've basically been improvising the structure as I go, so it definitely could have been constructed more simply. Maybe if I ever do another it will. But it's solid and well-aligned.

Next up I'm working on the sub-structure and the attachment mechanism, before making some more tiles and covering the surface. It's going to take a lot more to greeble the inside now!

Thanks! For a project that just kinda happened by accident, I'm having a blast

Looking very good and I like your ambitions regarding the project. As for everything, sometimes the Gods of model making strike and you'll end up with a crazy beautiful result
Eager to see what you'll do in terms of final pics!!

Oh, just a Death Star wall on the old sanding block. NBD. Inform Lord Vader the station shall be completed on shedule [sic]. 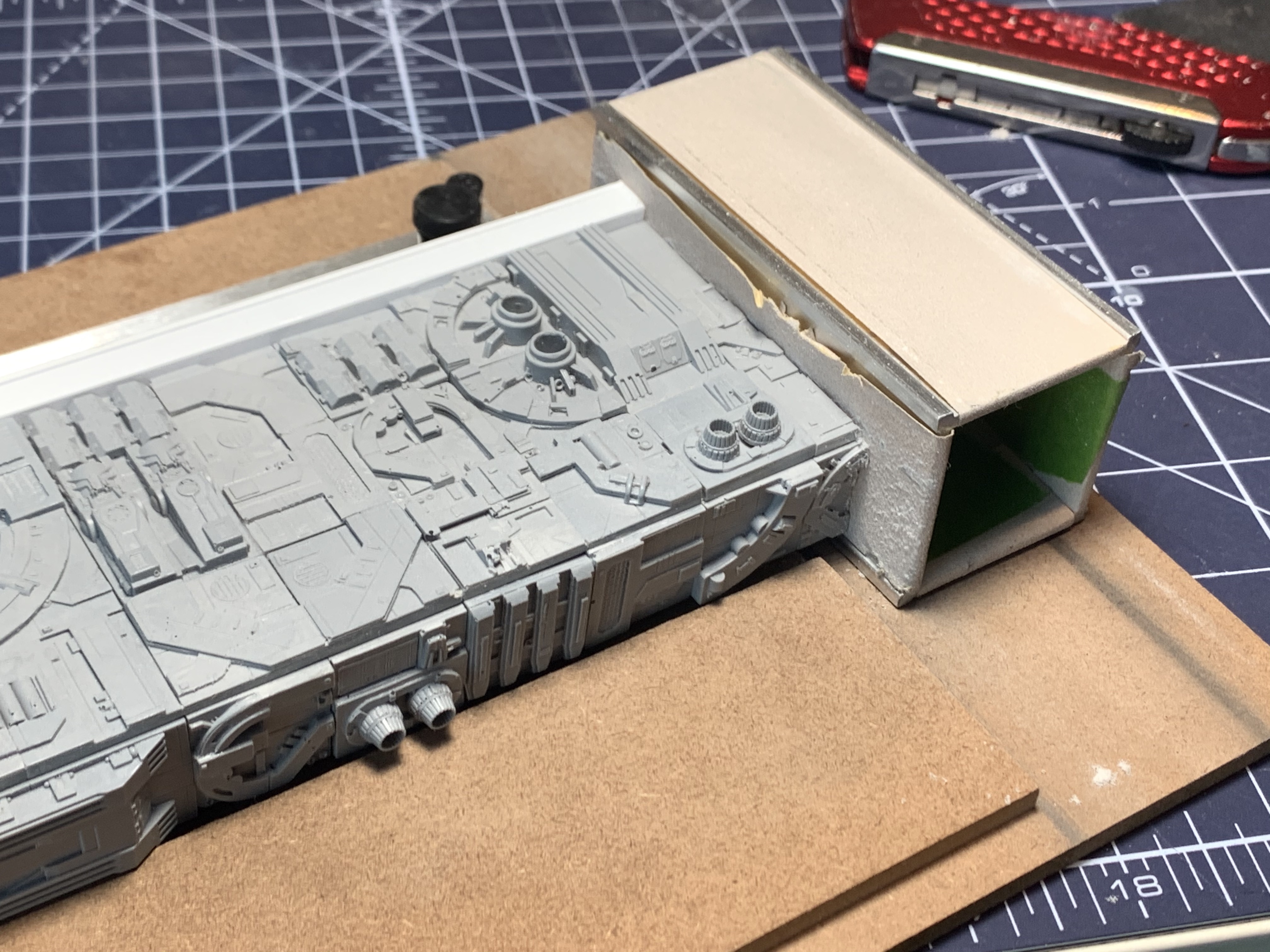 This is AWESOME! It is good to see someone doing something small, it seems most projects on The RPF tend to be huge. I downloaded the files. I am planning to get an Elegoo Mars soon and these are right at the top of my list of prints.

A question about your Cricut Maker cutter - do you actually cut the .060" styrene on it? How do you do it? How many times do you have to repeat the cutting process? I have an older Silhouette Cameo and can barely cut .010". I have also been looking to upgrade to a Cameo 4+, which is supposed to be able to cut up to 3mm material, but I am skeptical.

holtaa said:
A question about your Cricut Maker cutter - do you actually cut the .060" styrene on it? How do you do it? How many times do you have to repeat the cutting process? I have an older Silhouette Cameo and can barely cut .010". I have also been looking to upgrade to a Cameo 4+, which is supposed to be able to cut up to 3mm material, but I am skeptical.
Click to expand...

I have used .060" in the cutter, but I haven't cut all the way through - I only cut tile blanks on it, which are all in straight lines that make it pretty easy to score & snap. For up to .030" I have been able to cut all the way through, which is needed for the tiny complex shapes I tend to come up with. I use Cricut's "knife blade" accessory, which is meant for heavier materials. it's not fast -- it takes up to a dozen or so passes.