[originally started mid 2018, finished during covid lockdown circa may 2020, and recently posted on the RPF facebook page]

("it's only a model" applies to a lot of things in my house, as we have small estate, little room and "smaller versions of everything compared to the USA". I tend to laugh about it)

To access the home cinema room, I've always wanted to "announce" the topic a bit. In the first stage of renovation of the house, I had a Amelie Poulain poster, a clap and a few painted items but it didn't feel that good. The aggravating part was the stairs themselves, it was just painted concrete and didn't look good, took dust and all. I only improved the walls with glass fiber mat (aka the quick and dirty way to give a clean pass to any doctor's office in France, works in hospital too and is the demonstration of Pascal's second theorem, paint coats on crap = clean).

In parallel with the pool project (and bathroom of war II) I first started by tiling the stair case, that took a while, started at the same time as the pool in april (this year 2018) and ended mid may (ish). I calculated that with the terrace included I have tiled about 245 m2 in the house and people tend to think I like it like self flogging. I don't ! I got better at it over time but each time I have to, I feel the large amount of time consumed :laser: and it's hard to deal with when you want to do more interesting stuff, like your saber sound board next gen... 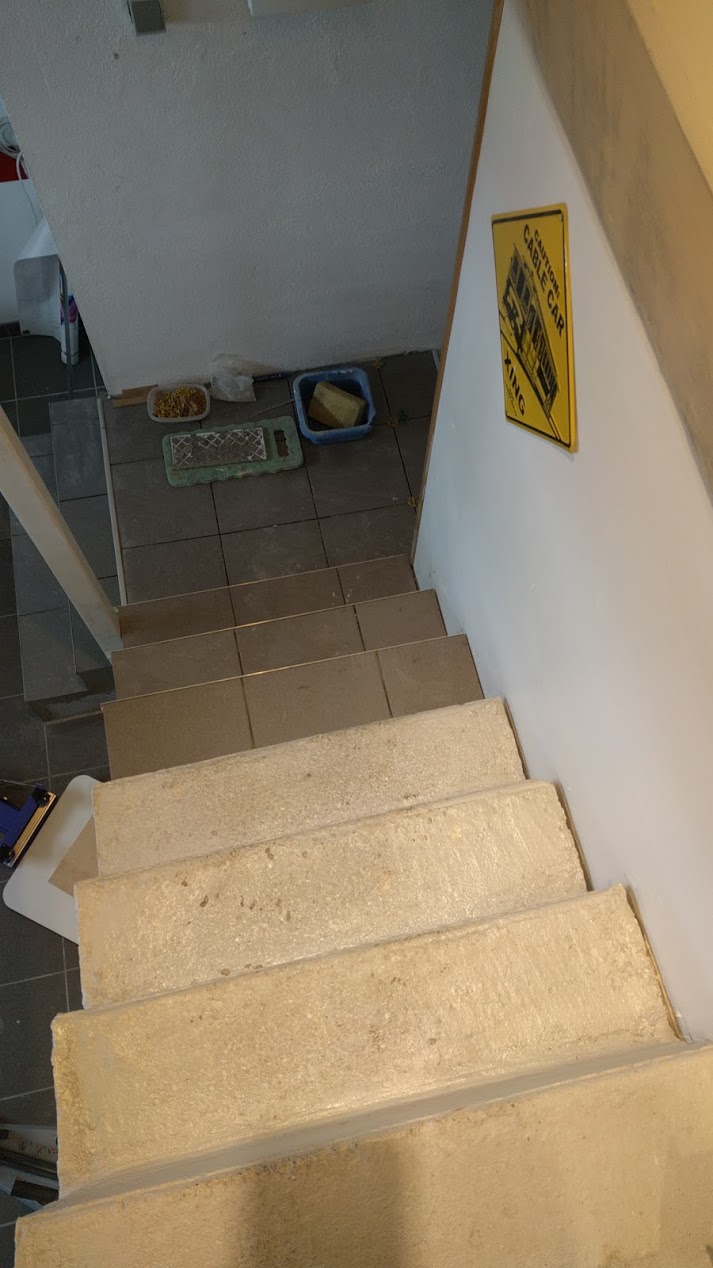 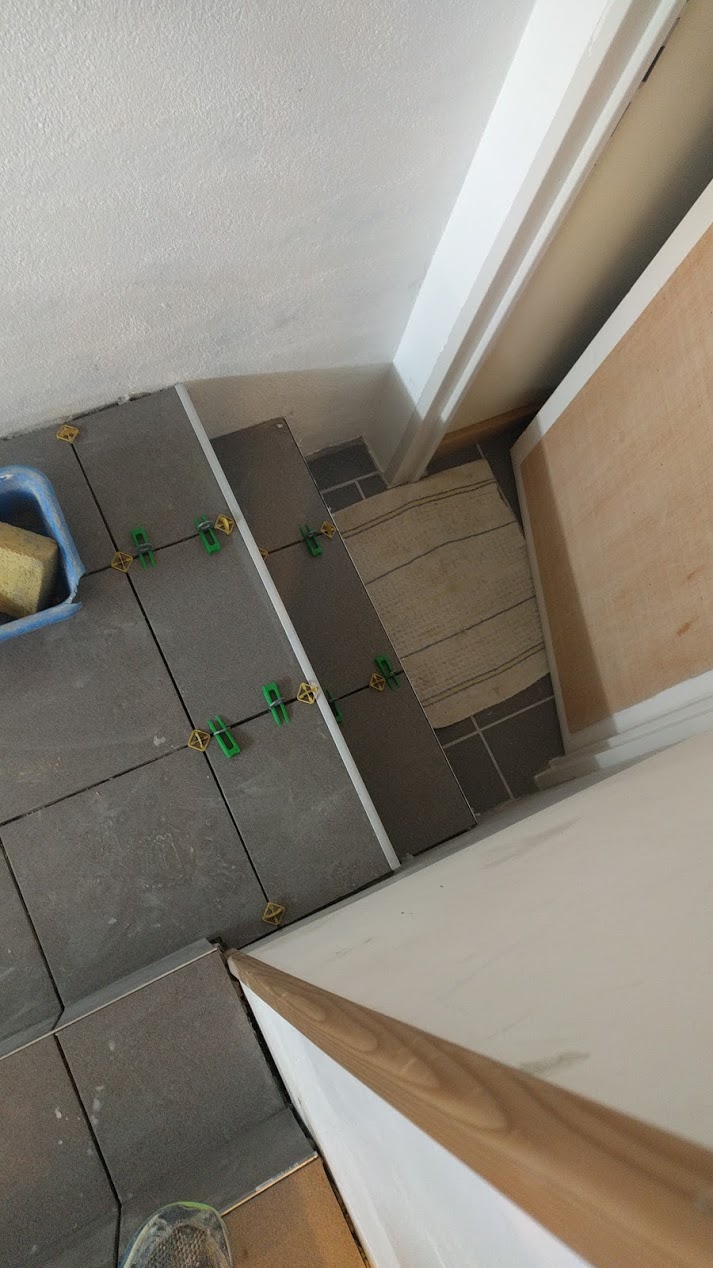 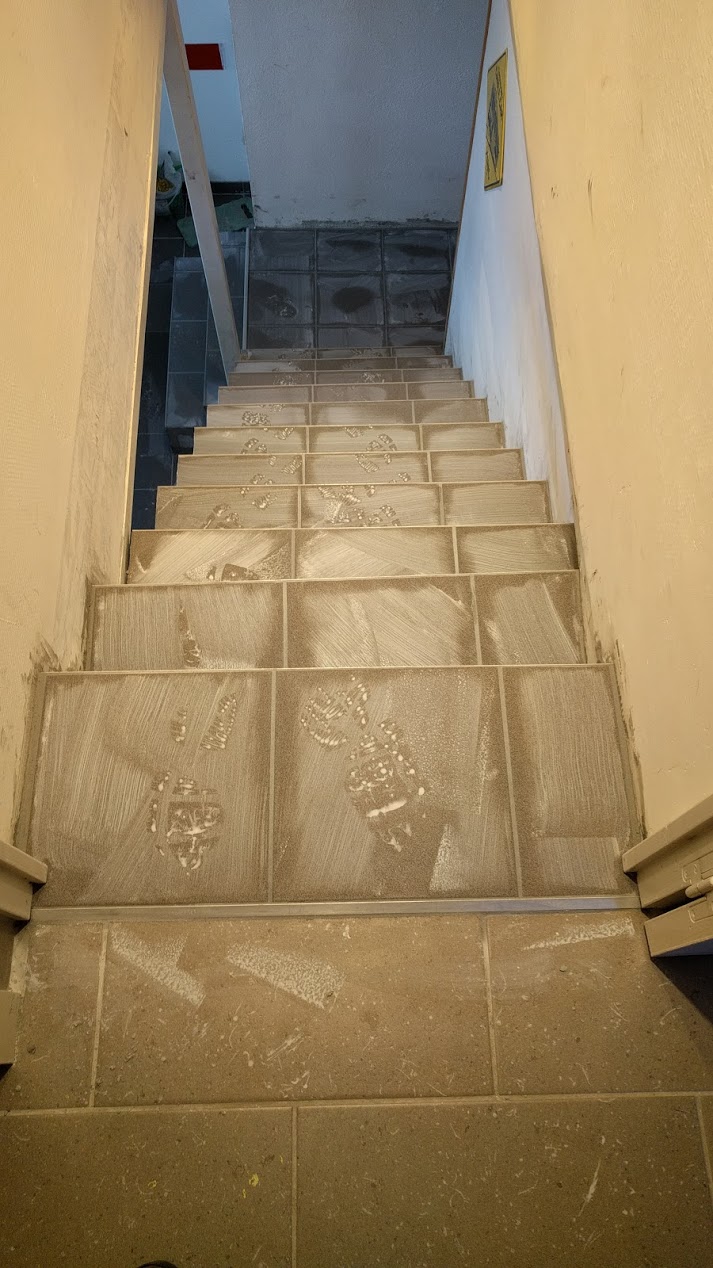 I finally got there after 4 weeks of works (not full time, obviously, even if I'm a slow guy). I think I started in late april and finished just for my birthday in early june. 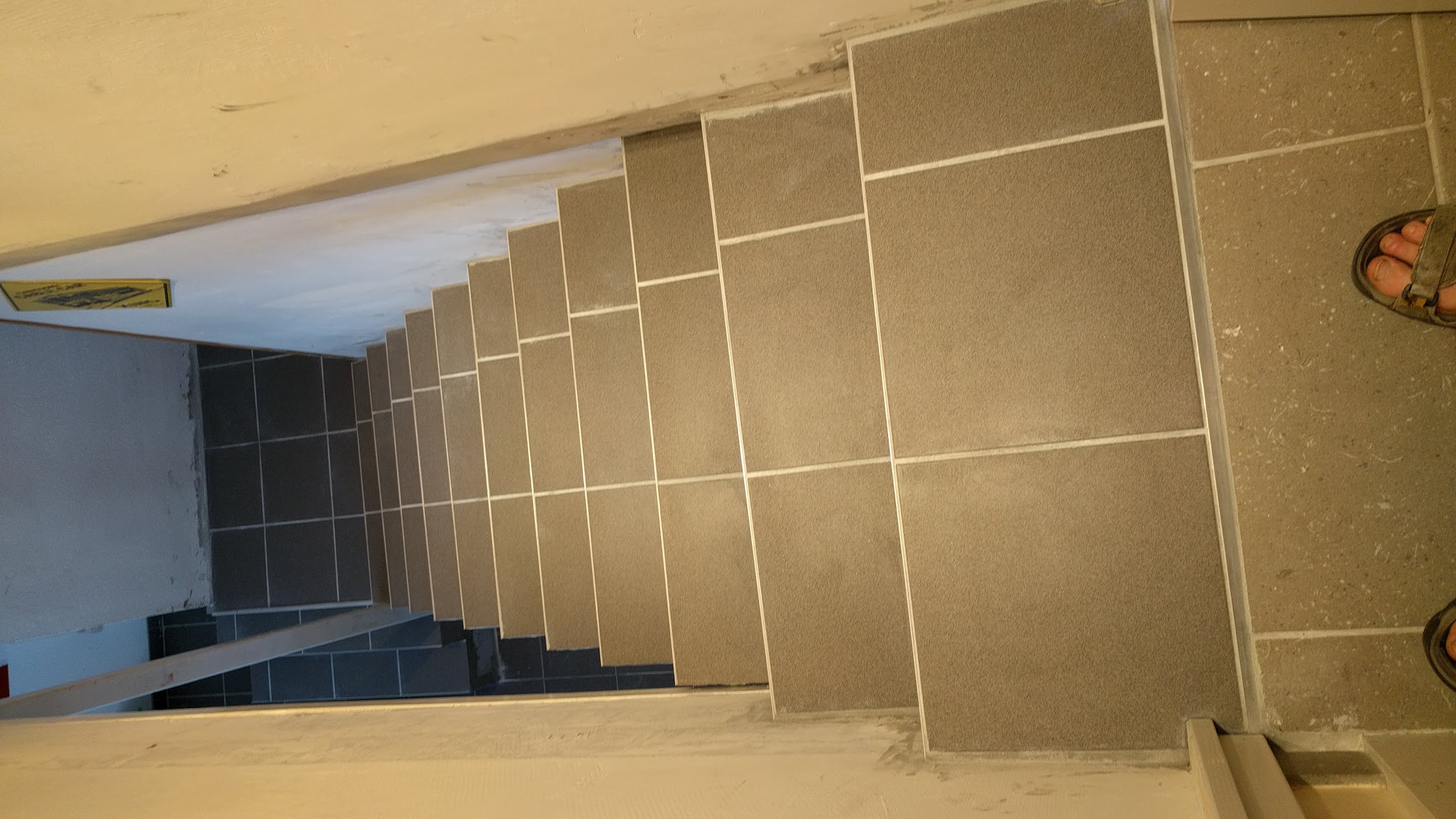 Then the wall project was to make a replica of the death star corridor and create a subtle sci-fi ambiance like this (but just a short fraction of it, hence the "model" joke) 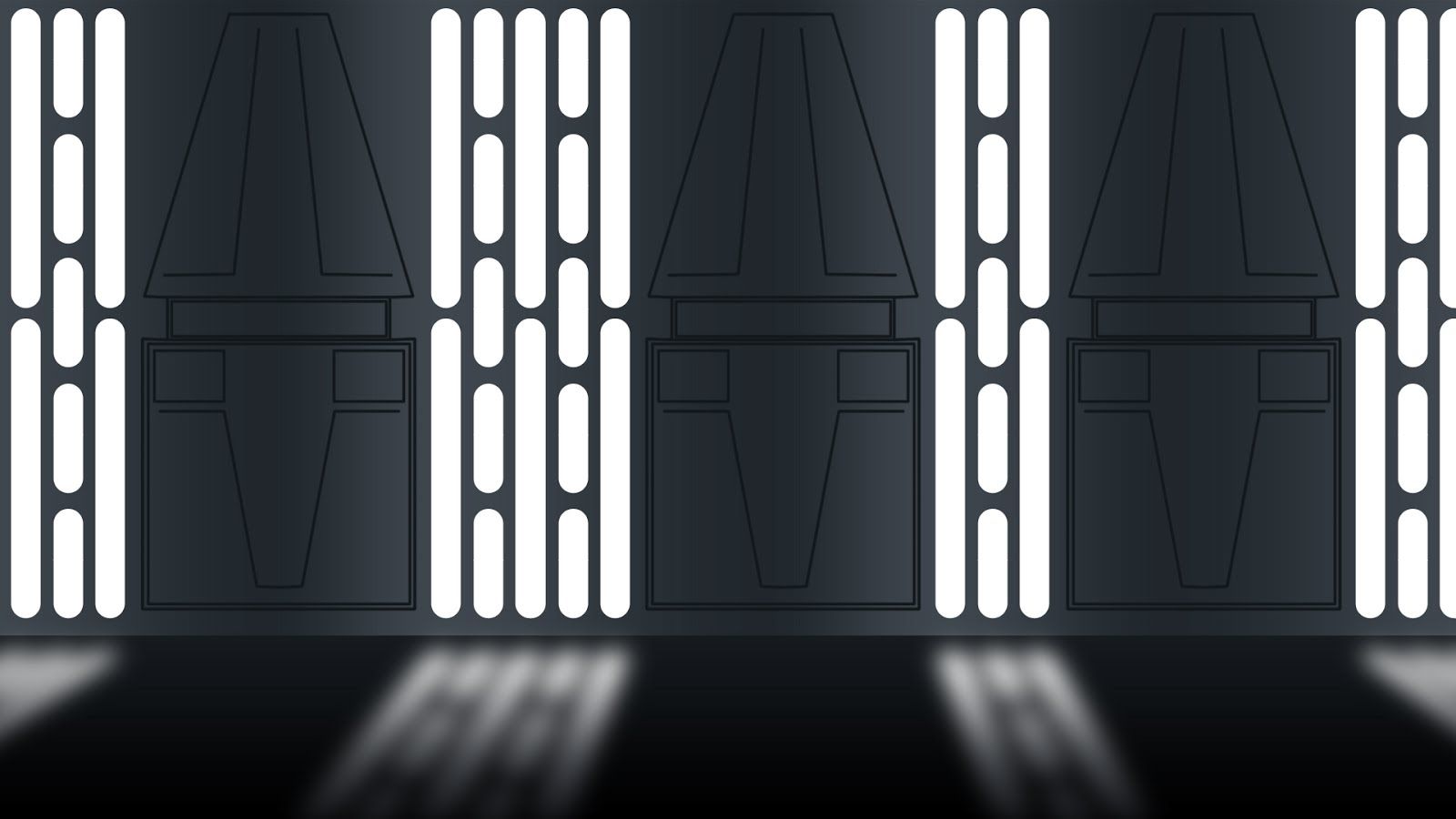 I started gathering information about those walls, found some base measurements and scale the SW complete blueprints book that was released recently, then decided to get a set of 1:12 space walls from galactic trade post (GTP toys) which are awesome BTW and they actually lead to another project for the home cinema room, which is my dreadful fate, idea lead to another project, project leads to dark side :excellent2:

the walls should be 106 cm wide, I decided to shrink this to 1m, which brought the GTP scale to 11.2 instead of 12. I scanned the toys to get a 1:1 print and started measuring.
The idea is to have a lit side on the right of the staircase, with the oval / lit cuts and the air vents on the left side. The challenge is that the staircase is already narrow, and I didn't want to add to much thickness on the walls. I decided to use sintra sheets on the left side to make the A/C panels. I'm making only the maintenance panel and the oxygen return system as seen here
thefwoosh.com/index.php/2015/12/gtp-toys-space-wall-or-not-star-wars-death-star-panels-review/

the oxygen intake needs a recessed cavity that I can't make in the wall, so I'm going with detailing that stick out only (for most of it).

based on VV and Elegant Weapons booth building experience, I added some mylar on the wall to improve light diffusion and I started framing. 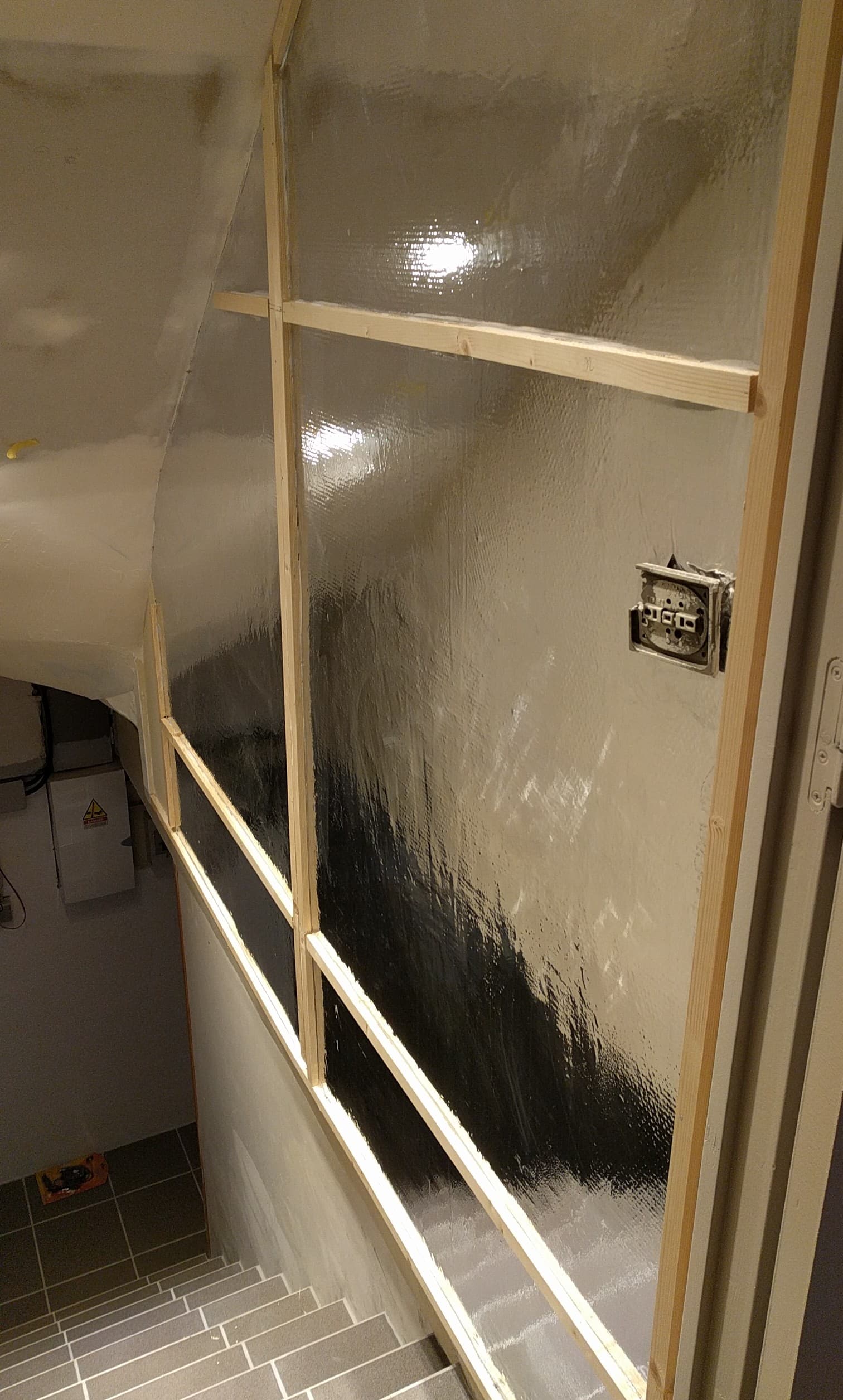 finally, I cut a bit of sintra yesterday to start making the shape of a maintenance panel. 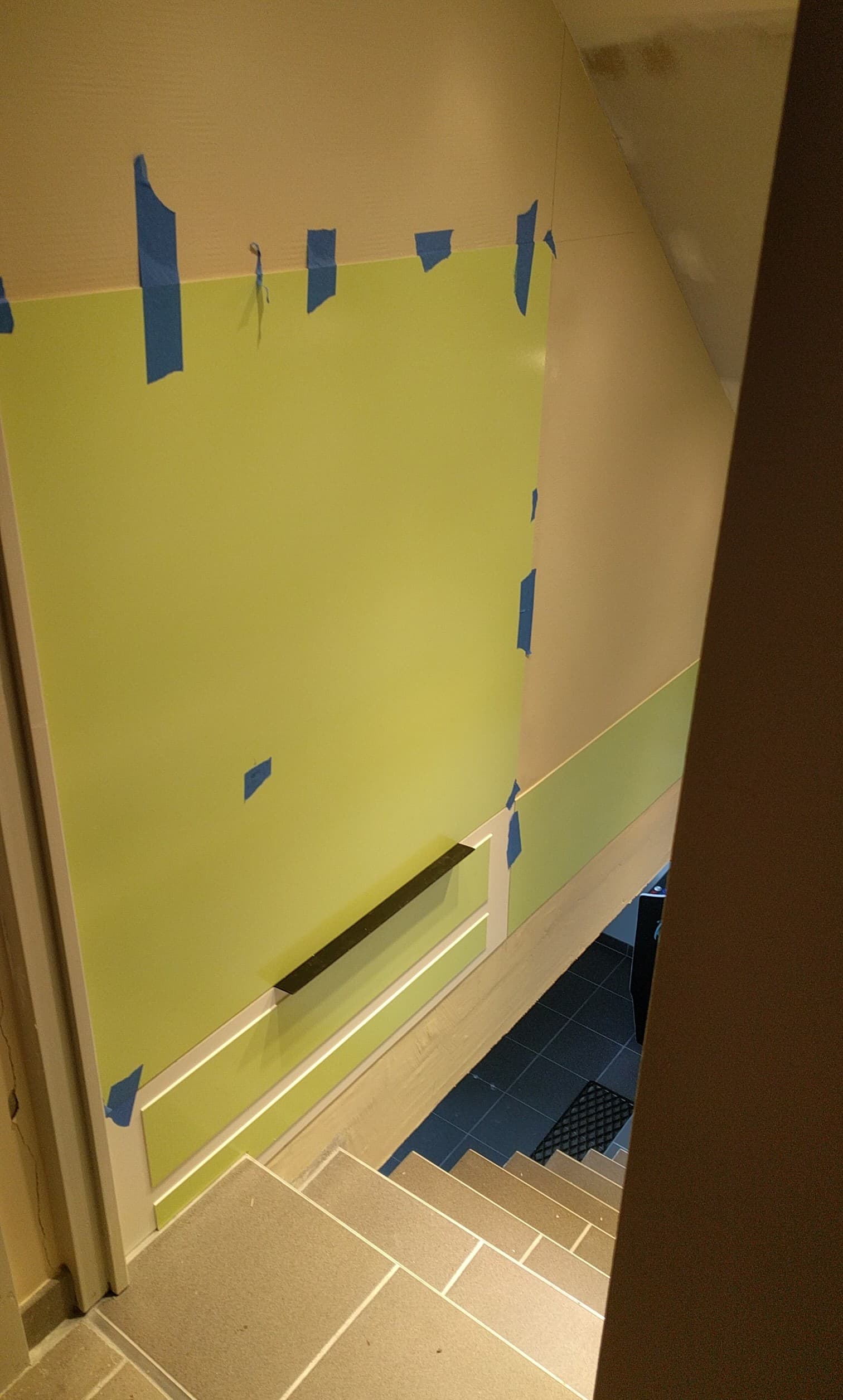 it's very basic looking for now, I yet have to find the right glue for the sintra on the wall because the spray glue I've used so far isn't that good. The TESA can I had gave good results but the next brand X doesn't stick well, I'm afraid it's fabric glue I used to keep tshirts in place on a silkscreen carousel or something but I can't remember which is which. Once I have the right glue, it will speed up as it's just plastic cutting and it's quite recreational.

for the right side, I can't use sintra, it's not stiff enough in 3mm. I have to go purchase some 3mm MDF then prepare all the cuts with the router (it won't go in EW's laser, not wide enough and I don't have a wood CNC that big). The MDF back will be covered with a diffusion film (frosted style) I got on aliexpress taped on acrylic backing (2mm) so that you don't touch the film, plus it's too soft / thin. This way the oval "windows" can be touched without wrinkling the film behind. I also have to install the led strips and route power wires.

working on this in parallel with the falcon table, I need to put an end to the plastic cutting as my shop looks like a mess because of it !

all the lighting is now functional and tested. The warm white color was questioned but after testing several color T°, it was obvious that putting a day light T° there would make something highly non welcoming as the ground level of the house is all in warm white either 3000 or 2700K.
The basement is of course in 6500 for the color index (Color Rendering Index) to be ok but there is no transition with anything else except the lab which is 6500K + a 4000K ceiling panel just to warm it up a tad. It will be probably less space ship looking but also less scary. Some 6500k lights are, like I like to call them, "pray the dead" lights, very dull and zombie hospital type of lights.
Bottom line : once there will be all the panel on top of it, there will be so less light that I doubt it will really matter. 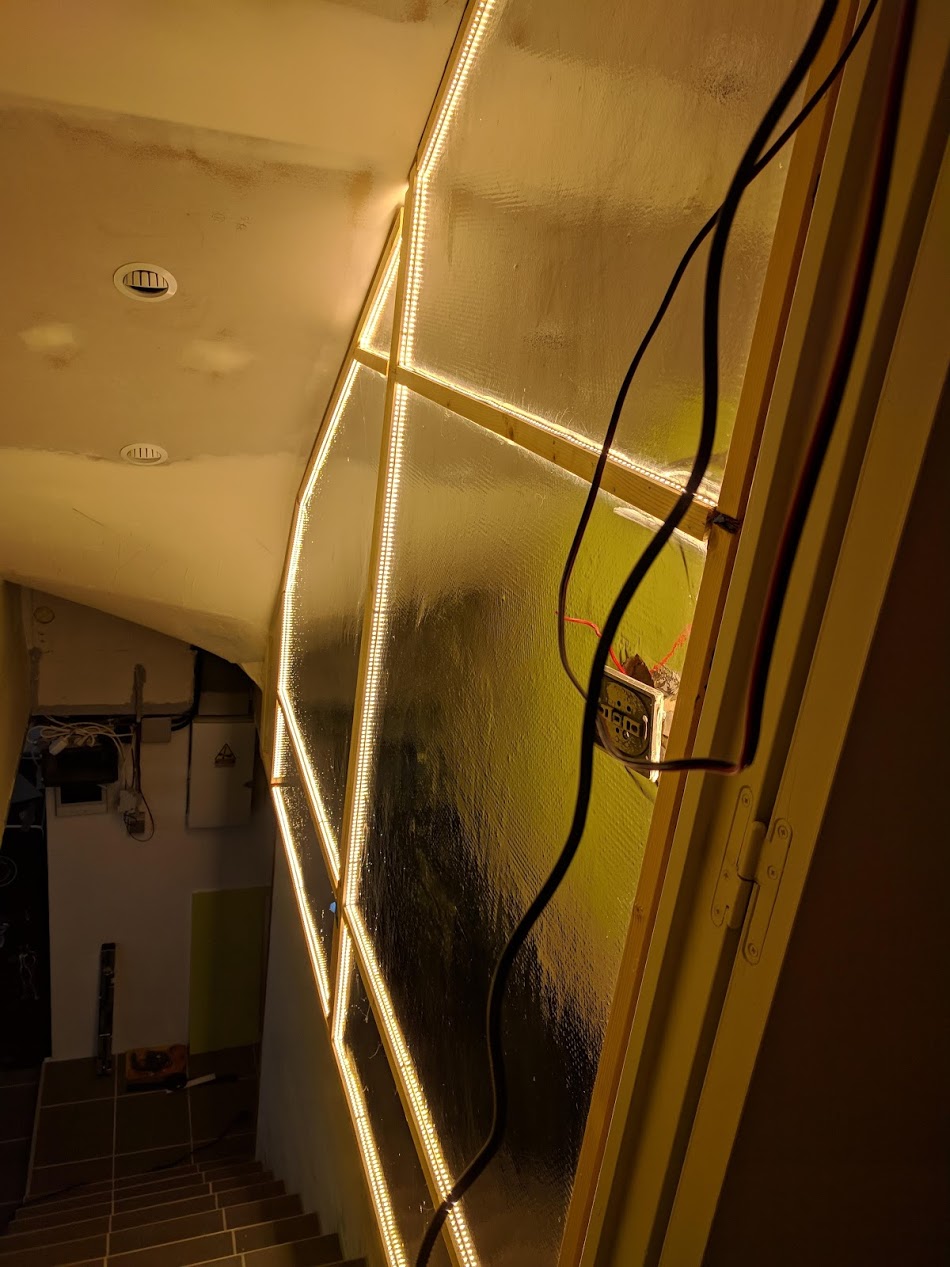 Testing with my diffusion film and the laser cut templates (Elegant weapons) that I will further use to router cut the panels. 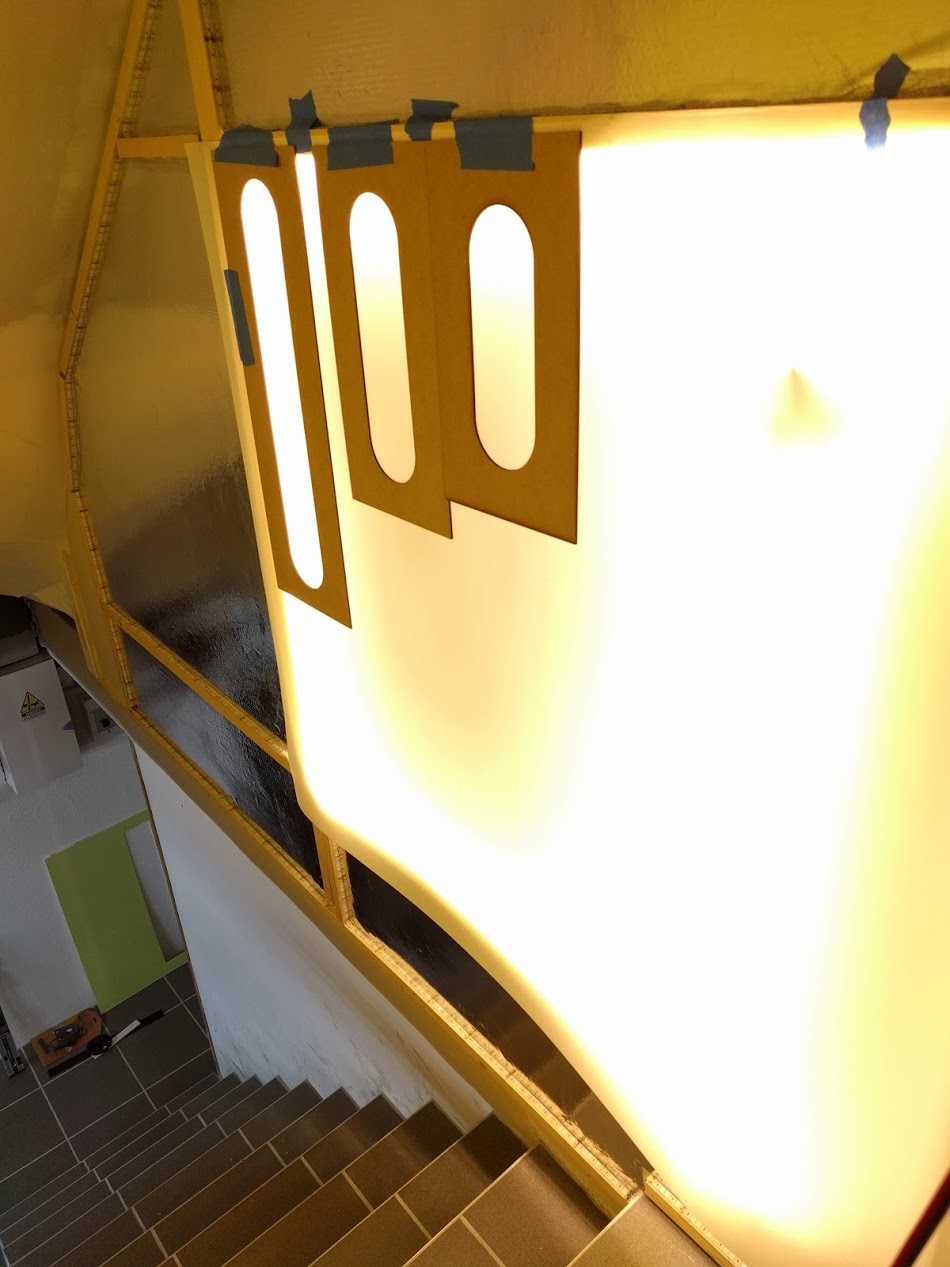 and the left side with more cuts made, it starts looking like the real thing. Can't wait to have it painted gray and add grills and greeblies. 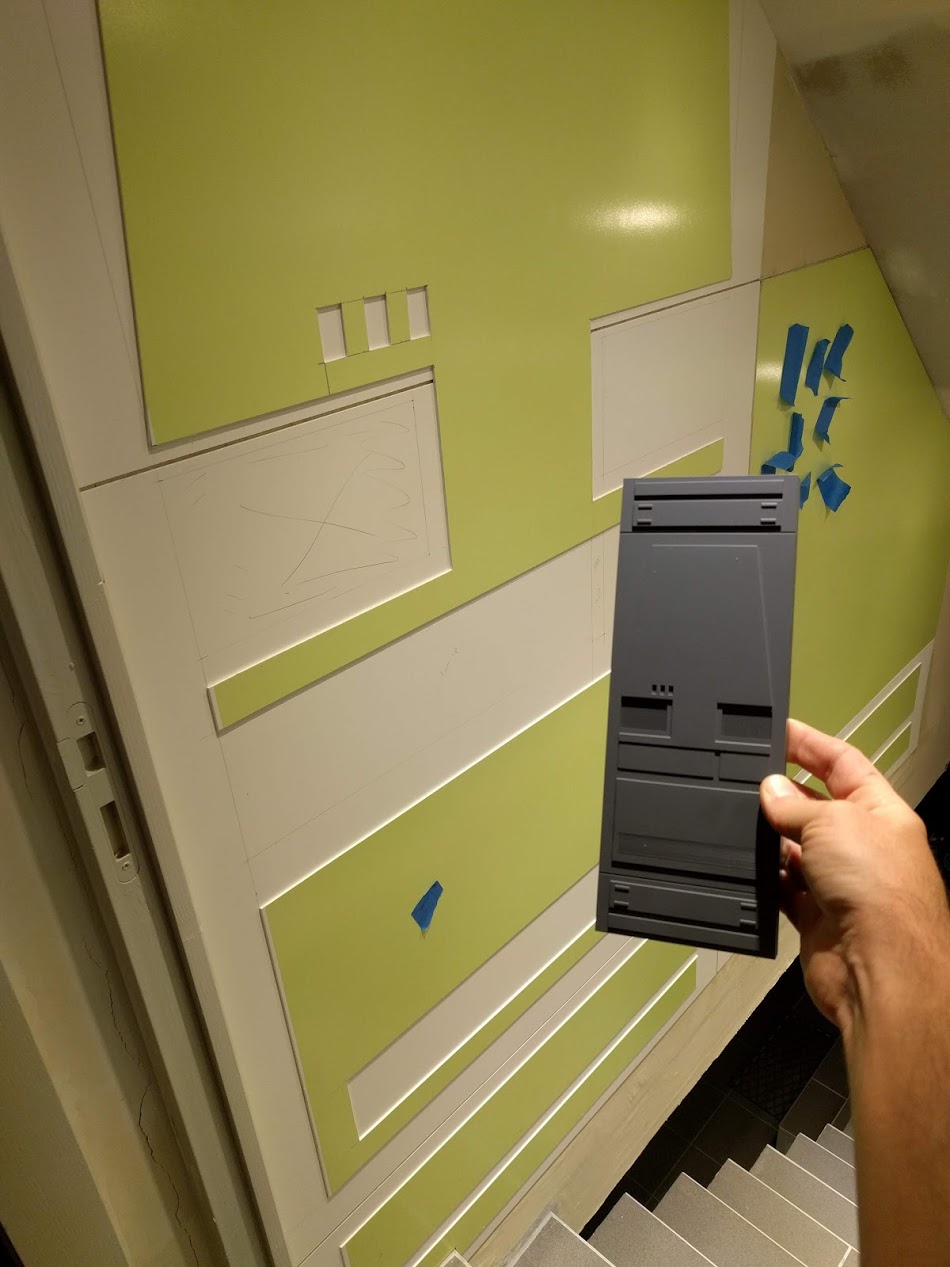 another fast forward to 2020 (erv' you SLACKER MOFO). Covid19 and shutdown had some good consequences as I worked a lot on my personal projects and decided to finish a lot of stuff while taking a break and hiatus from saberland.

The project back pedaled for 2 reasons, 1) I needed a good weather to be able to use the router and cut all the lit panels and I wasn't thrilled about that activity and the time it will need 2) I needed a better painting solution, which I purchased also during covid, and I was able to use 2 part primer (sprayed) etc. Since the paint gun was excellent, I decided I will make a booth in the staircase by protecting everything (almost sealed) to spray the walls. Initiallly I though about doing that with a paint roller, reason why I cut to size and glued everything in place, unpainted (a little stupid if you ask me now). Since I wanted a really smooth and slick surface, I opted for the spray gun with the fear of contaminating the whole basement and movie room. The confinement was not fun to prepare but paid off 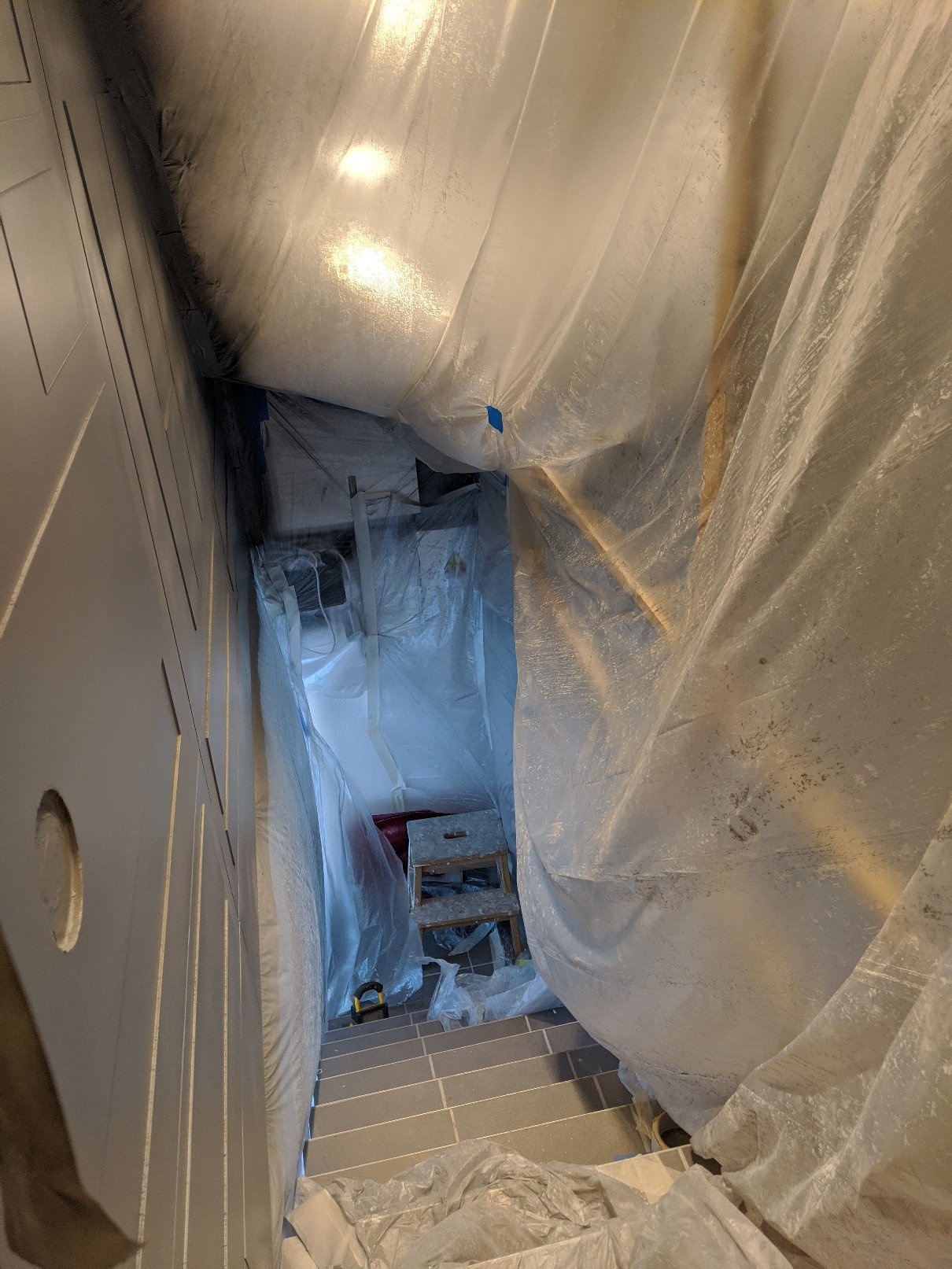 for the diffusion film, I had to buy 100m of led backlight film on aliexpress, neat product and affordable. I wanted to glue it on some acrylic, then acrylics to the wood, then simply superglue the heck of the film, used a full 2 oz. instacure from bob smith industries, life saver. The film is thin but overall very stiff and kept itself straight and flat, its not wobbly. There are some differences in the lit area because they aren't of the same size, but the lighting effect is pretty cool. The ceiling / lit panel junction has a gap since it's highly irregular, I'm going to put some electric tubing to hide this and make it look even more sci-fi. Or let's call it sci-fit(tm) 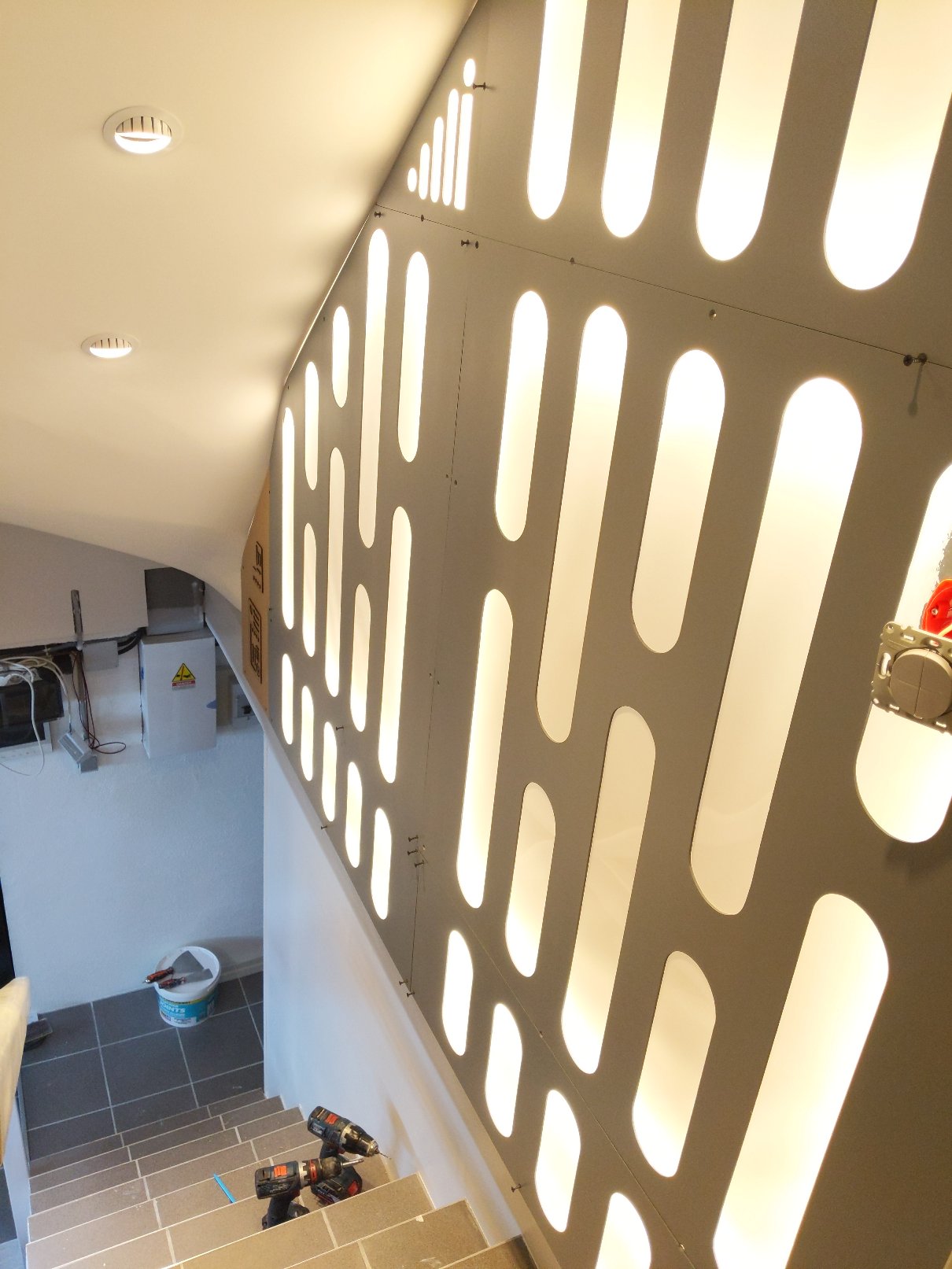 The non lit side, with greeblies to hide the electrical box that has the derivation for the ceiling lights (it was just a caged, side flood light before, now the ceiling has 4 drop / shower lights (led) 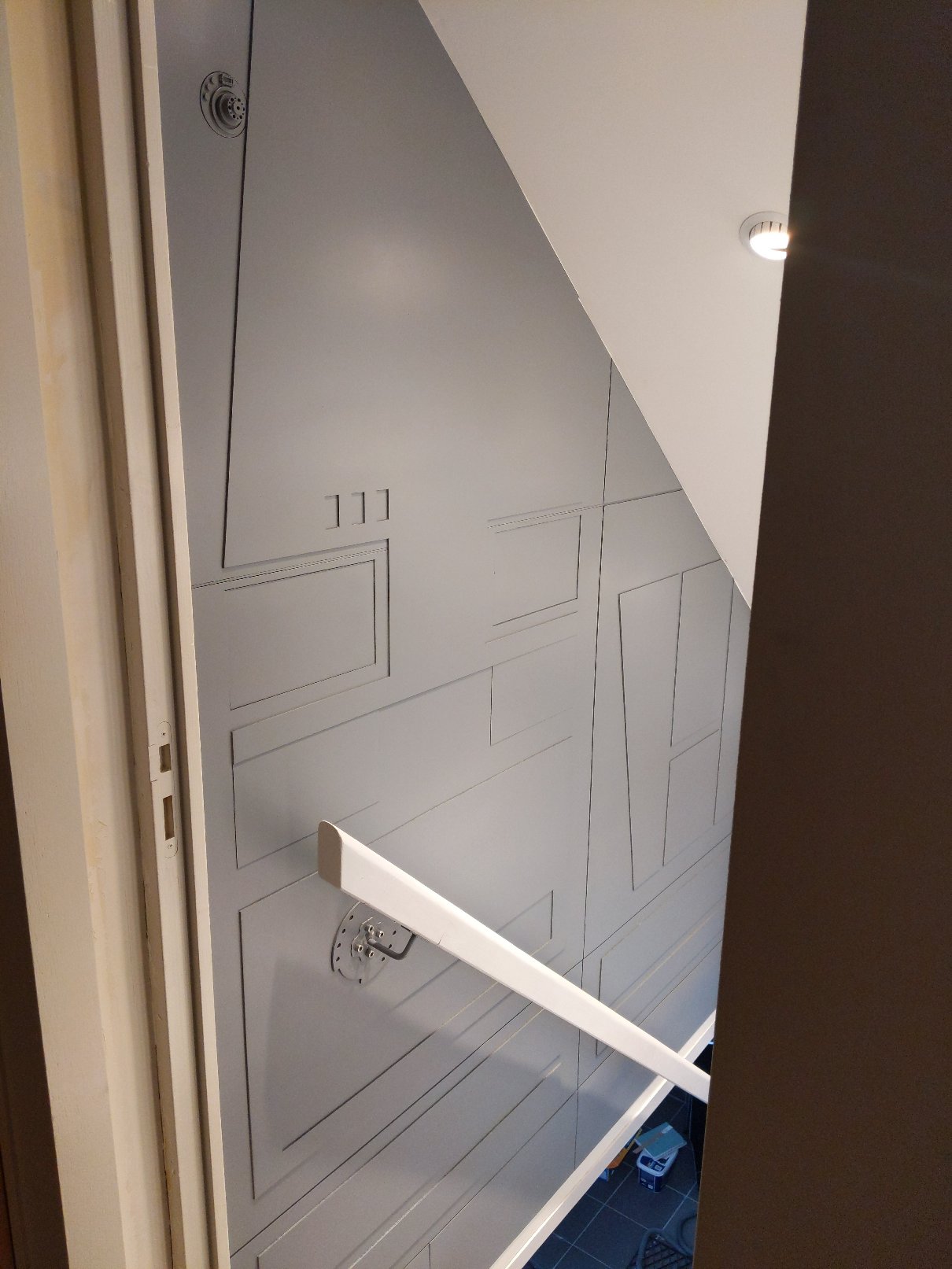 Then I designed a filler in MDF for a non lit section, with greeblies. 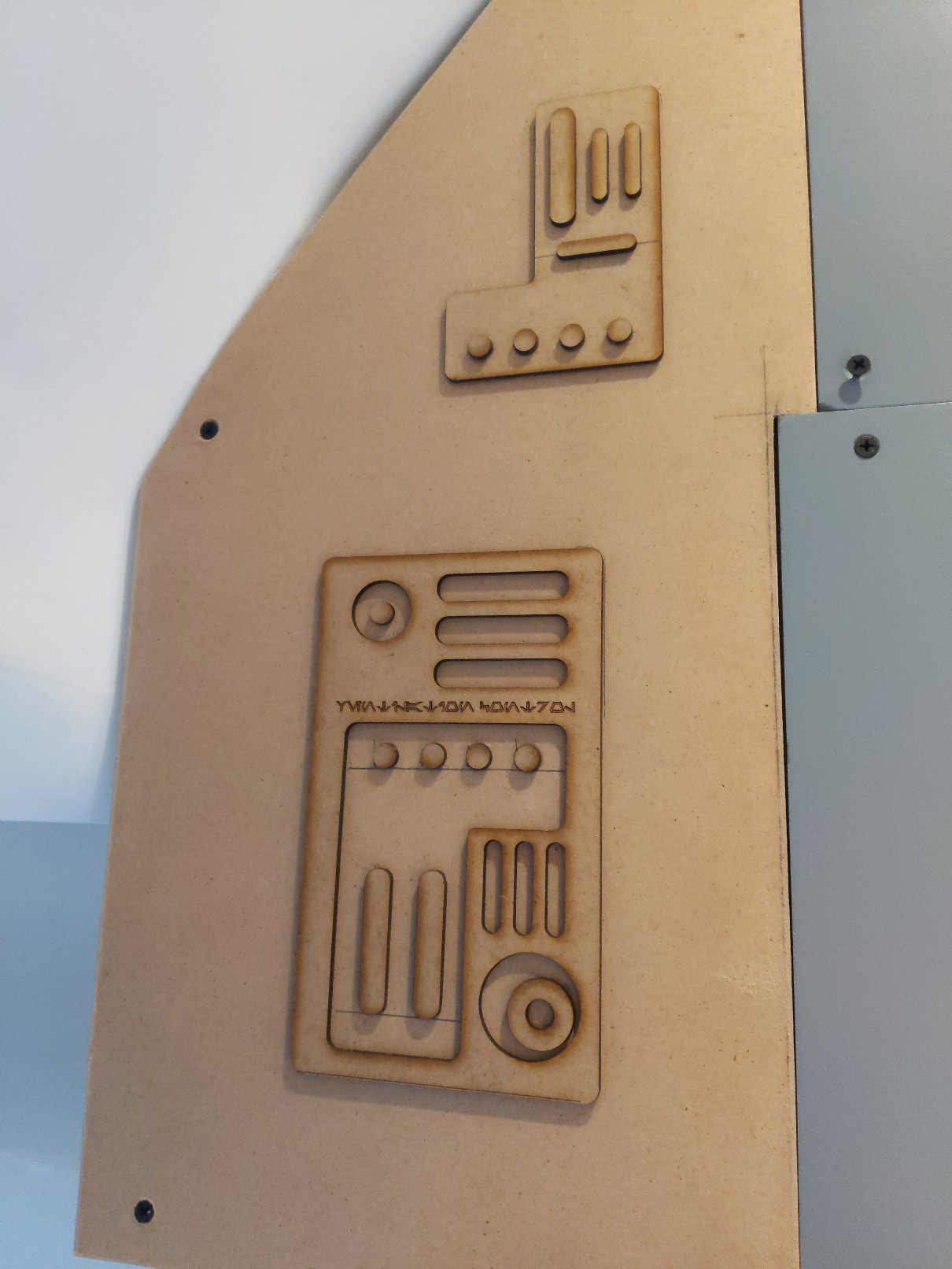 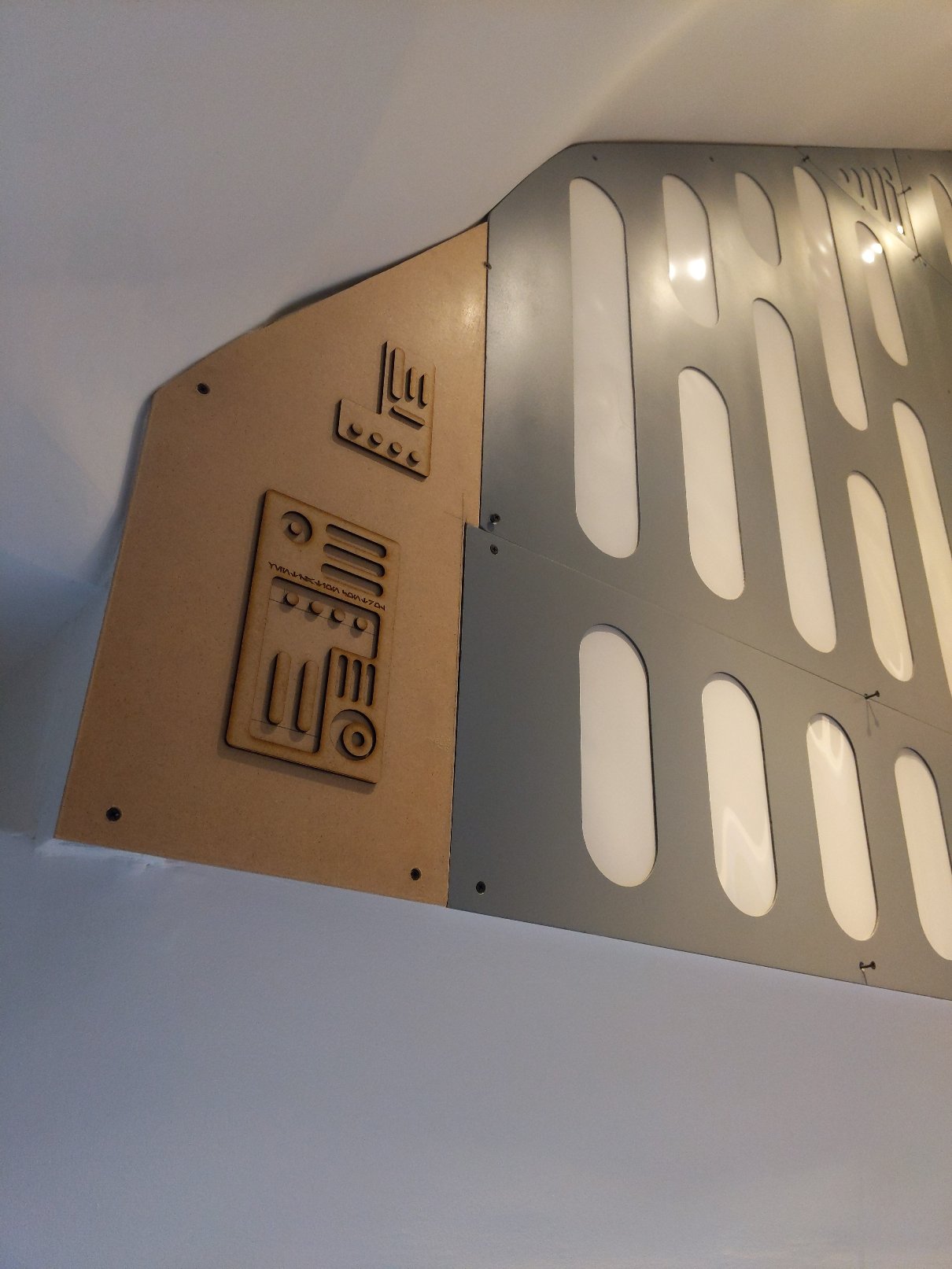 Then I designed a switch plate / cover that went over one of the oval-lit area, and light shines thru. That's one of the design I prefer, my other things, including the mandalorian door have some lack of artistic side (I know, hey it's just a ******* door, open, close, done) 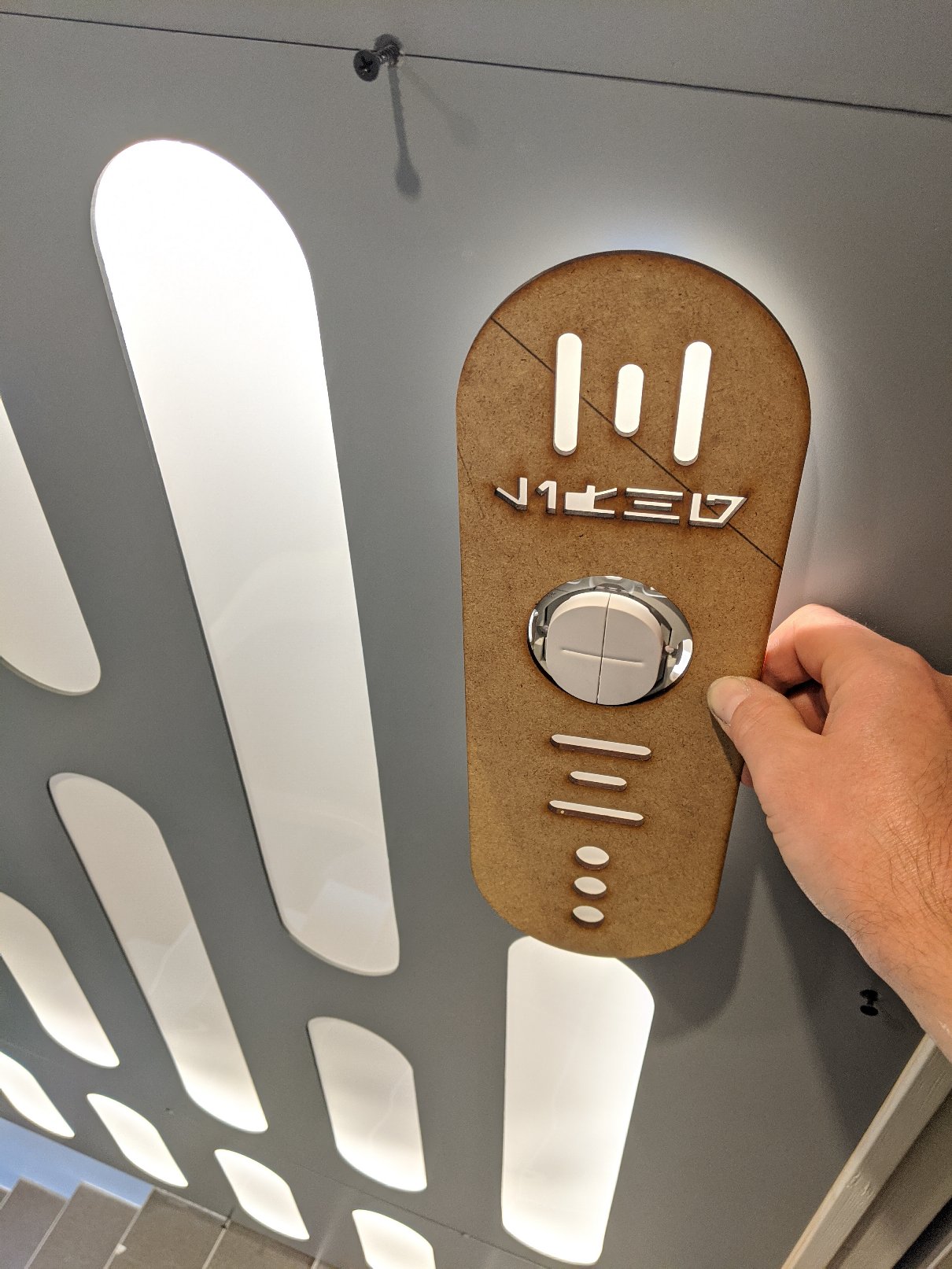 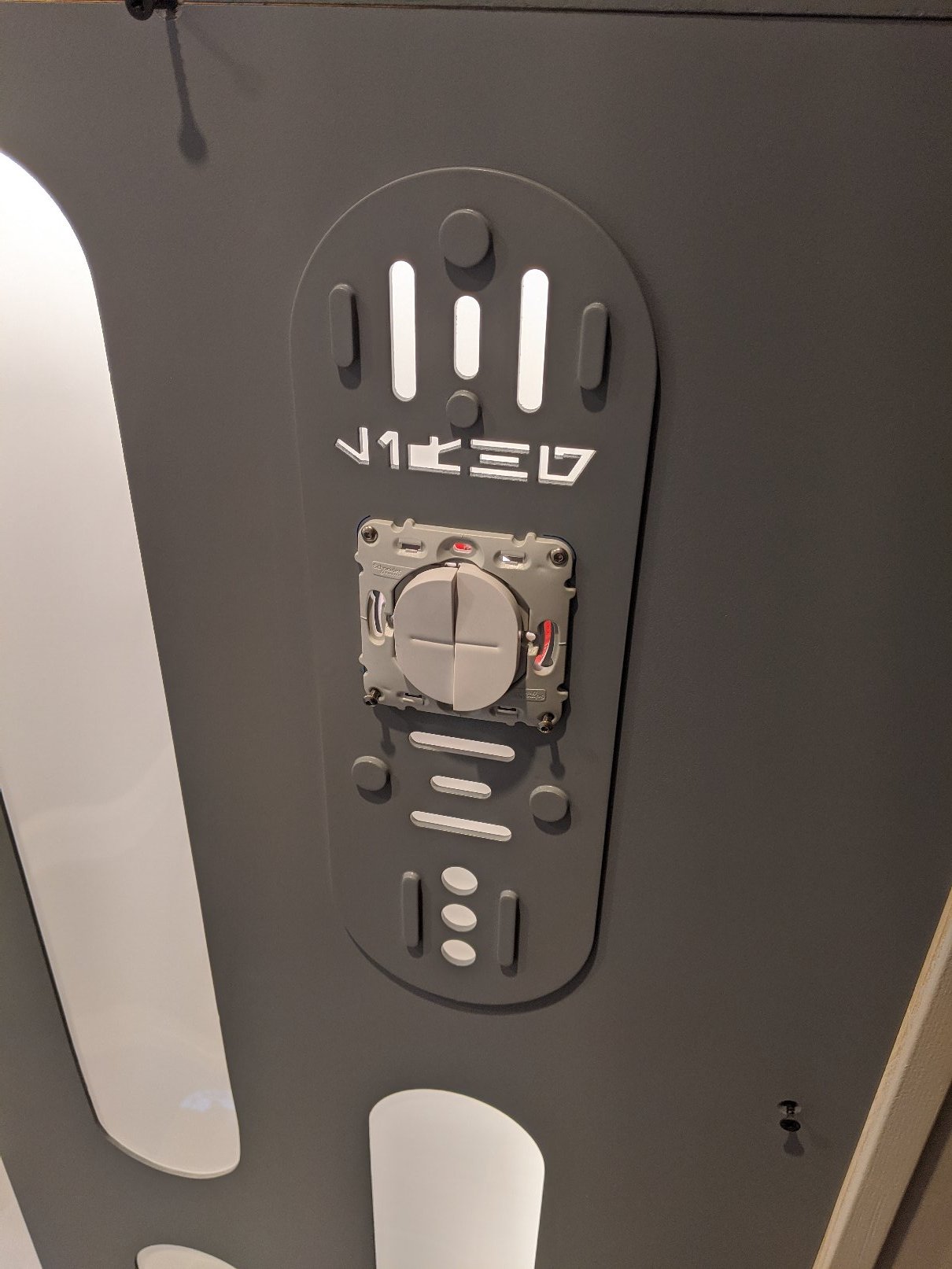 finally, as it's part of the same area, I installed the back to the future props, and more stenciling on the walls, and painted the entrance of the HC room grey (wall paint, very close to the Telegray 2 RAL paint) to provide a nice contrast to the massive red area of the door, and white sci-fi logo stenciled on the wall. 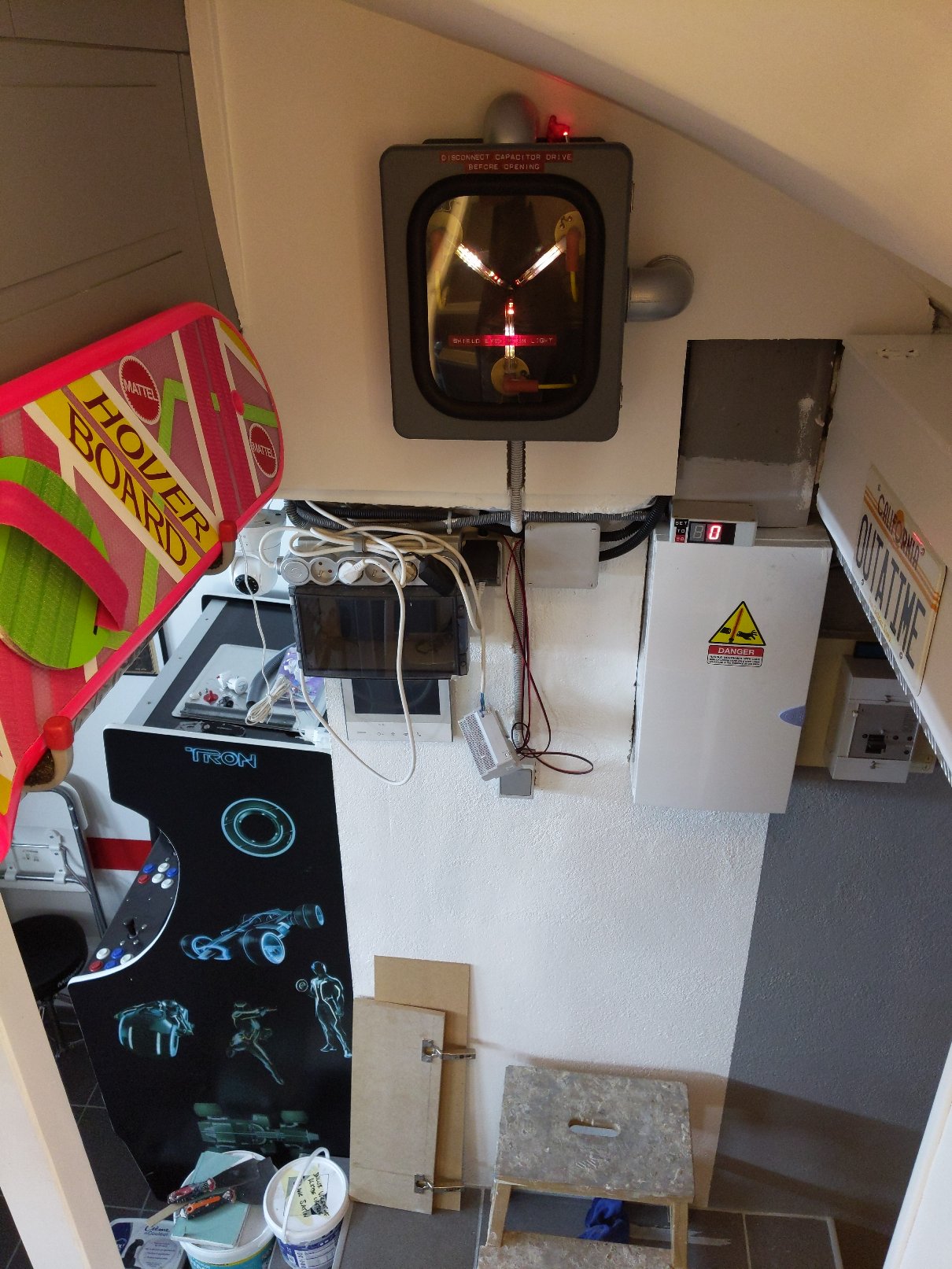 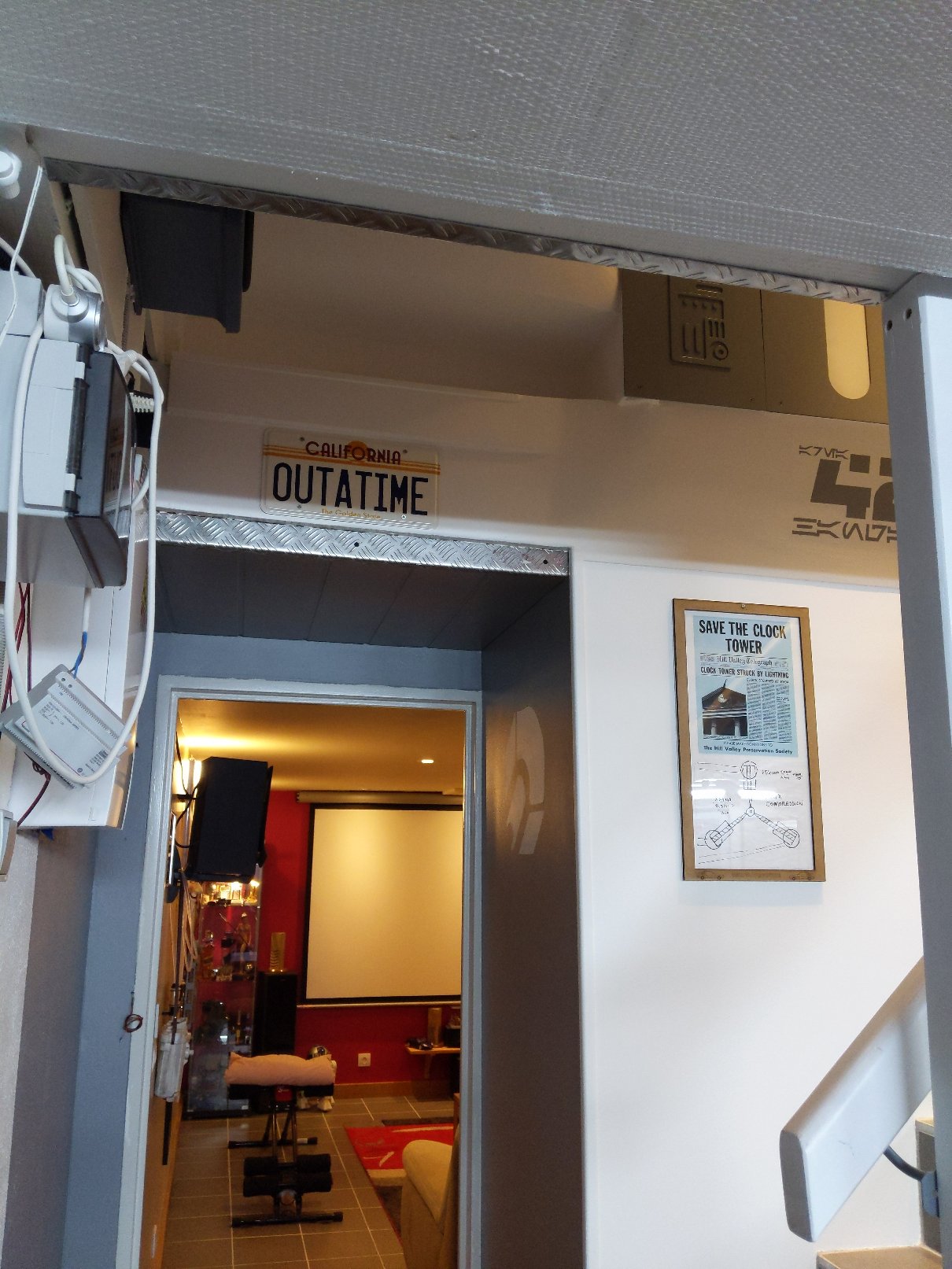 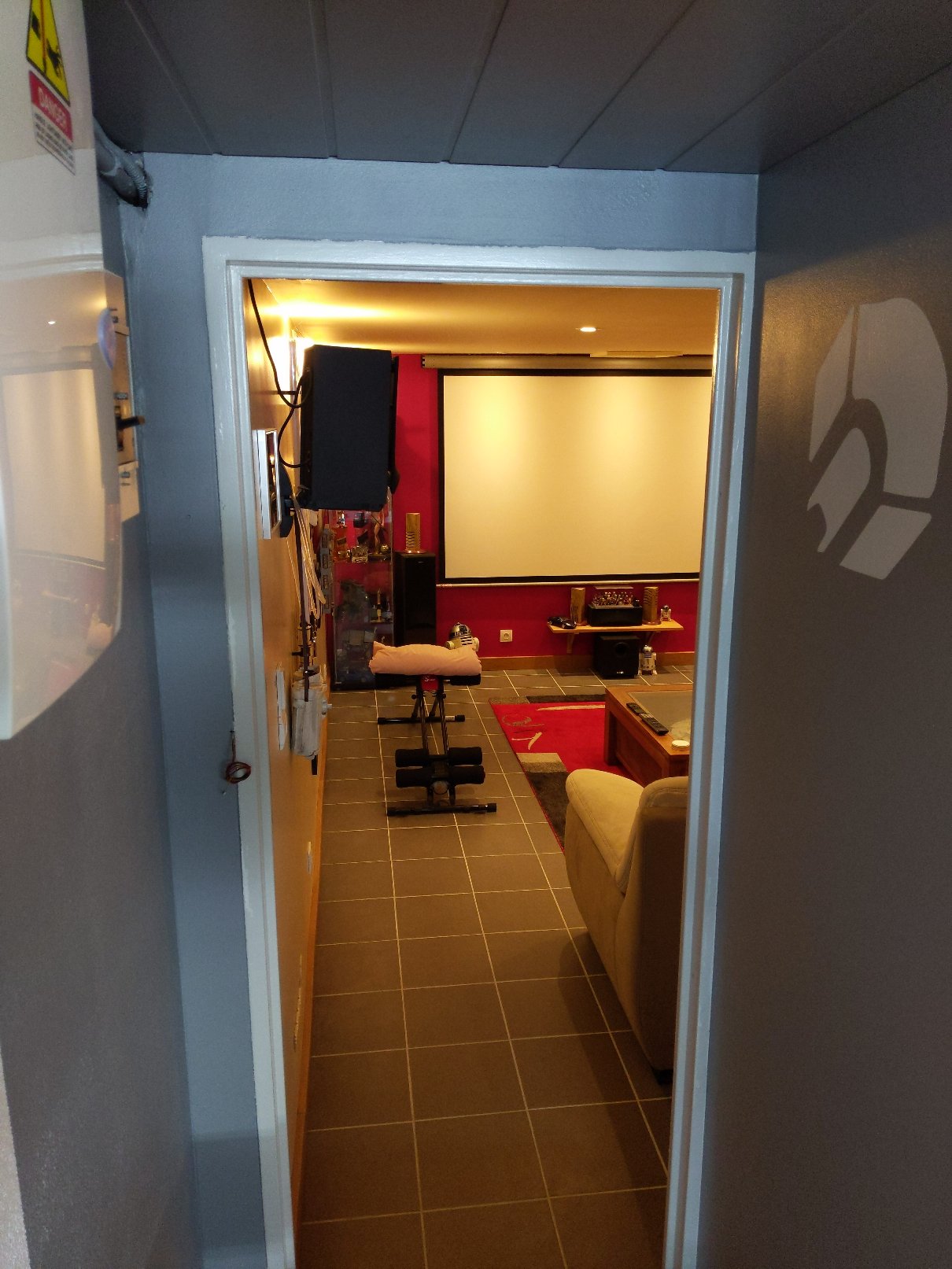 Now have to connect the dots together, make the HIC electronics to the point I can install it and paint (code I can finish when I want, with the door in place) and build some more greeblies panels with laser cut acrylics (droid computer interface, on-off switches). I stole Genesis Custom Sabers idea of the interactive nametag, a led display with configurable animations, I put one above the general electricity breaker and it says "reactor main switch.... ARMED" with blinking and scrolling. I need a general power switch for all that, and the HAL9000 unit that guards the entrance of the HC room....

What is the width and length of the white light parts on the wall?

RPF PREMIUM MEMBER
Looking great! I would prefer a stainless handrail for the sci fi look

shadowlova said:
What is the width and length of the white light parts on the wall?
Click to expand...

divide the width of the panel between 13, remember that the distance from the lateral edge and the first light bar is double the width of a light bar, and also note that the GTP panels are not that much screen accurate, is better go to the original source, EP IV