Wasn't sure where to put this, but I wanted to share a DC Animated-version Brainiac Piñata I made for my first Superhero/villain birthday party a few years back. Obviously not a super-precise model, as it was doomed from inception, but super fun for the party ! So here we go: 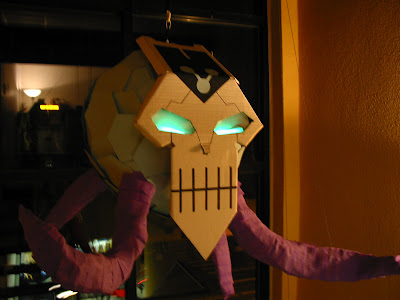 I'd had some idea, albeit vague, about how I wanted to go approach the project, but needed some pointers. Obviously this meant a trip... TO THE INTERNET!

Pretty quickly I happened upon Brian Anderson's fantastic PinataBoy website, where I found great basic instructions, tips and inspiration. I just wrote to him directly for advice; I had several questions and he answered them all with haste and great detail!

For example, he gave me a great method for building the tentacles, which I adapted to create a thicker tentacle (I used three long balloons of different lengths, so that it would taper off at the end to one balloon width). Here's his step-by-step for a basic, one-balloon tentacle:

Here's how I would make a tentacle:
1) Blow up a long balloon.
2) Tear newspaper into long strips that are about 2" wide. (I use a paper cutter to get even strips).
3) Starting at one end of the balloon, wrap the long newspaper strips in a spiral pattern around the balloon, taping the newspaper pieces off occasionally with masking tape (but don't tape them to the balloon, only to other newspaper). Don't wrap them too loose or too tight, because you're going to bend the balloon and you don't want the newspaper strips to tear off.
4) When the balloon is fully wrapped, bend it into the shape you want and use a long stretch of masking tape to hold it in place. For example, if you bent the balloon into a U-shape, you would use a long piece of masking tape going from one end of the balloon to the other ac ross the top of the U. You would make an S-shape similarly: make a small U-bend with one arm much longer than the other, then tape the short end to the "body" of the S. Then make a second U-bend in the long arm and tape the other end to the body of the S.
5) The newspaper wrapping will tear and form gaps when you bend the balloon around, so patch these up.
6) Cover with papier-mache and let dry. You'll probably need two layers before it will hold its shape.
7) Cut off the masking tape and use papier-mache to smooth out the spot where the tape was attached.

Now you have a rounded-end tentacle. This method can be used to make bends in two dimensions (so the tentacle would lie flat like an S on the ground). If you want a tentacle that bends in three dimensions (like the Medusa's hair), make one bend and stiffen that with papier-mache, and then make the second bend after the first one is dry. Play with this a little and you'll quickly see how to make sharper bends or more gradual curves.
Click to expand...

The other thing he helped me with was the body itself. I originally tried to find a large weather or punch balloon locally but couldn't find anything that worked, and didn't have time to order one before my party. I think thought of making a geodesic framework of straws and laying hexagon card stock over top of it, but shortly into the construction I realized it wasn't going to work. However, Brian came through again with the following punch-balloon shopping lore:

"...the good news is that there are two different sizes of punch balls, and you've just got the wrong size.

There are two different kinds of balloons that are both called "punch balls." One of them blows up much larger than the other. The kind that blows up large (about 3 foot diameter) has an opening that looks like a regular balloon, with a rounded lip around it, and it's always sold with a big yellow rubber band attached to it. I have attached a picture called Buy-One-Like-This: 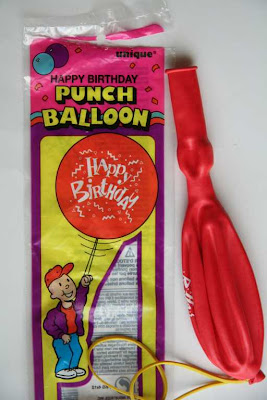 The kind of punch ball that blows up small just has a "straight pipe" opening with no lip around it. A picture of that kind is attached as Not-Like-This. (I'm guessing that's what you've got right now.) 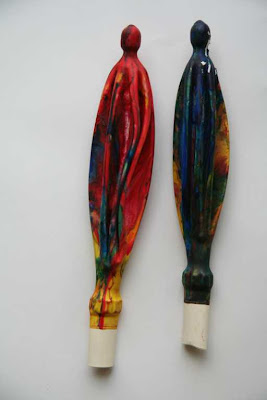 You can probably find both kinds at Party City, but I know I've seen the larger kind at Target. The larger punch balls come in solid colors (red, blue, yellow, and green), whereas the smaller ones are usually multi-colored as in the attached jpg."
Click to expand...

For figuring out the size of hexagons I'd need, there's a shockingly large number of geodesic dome calculators out there on the web. I don't remember the exact one I used, but here's a few. Find one that lets you adjust the number of sides of your panels.

After everything was dry, I traced the tentacle ends on the base and cut holes out for them, and cut flower-petal flaps in the ends of the tentacles to fold them out and hot glue them to the body. I was able to skip the second-layer and papier-mache smoothing steps as I just wrapped the tentacles with purple-crepe paper streamers. I then hot-glued the blue cardstock hexagons I had cut out around the surface, cutting a few custom ones to fit around the tentacles. 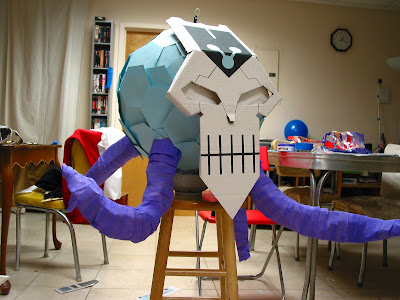 The face was made from a single piece of filing box cardboard, cut to the shape of Brainiac's DC animated face and decorated with Sharpie. I glued piece of white paper behind the eyes and a black construction paper/blue cardstock Brainiac forehead-symbol on the top. The candy hole was behind the face plate.

I inserted a wire hanger from the inside through the top, which also served to stabilize the body, twisted close the hoop up top for hanging, filled him with candy, sealed it all up and done! All that remained was to break two green glow-sticks and tape (shoulda used glue) them on the eye shelves to complete the look! 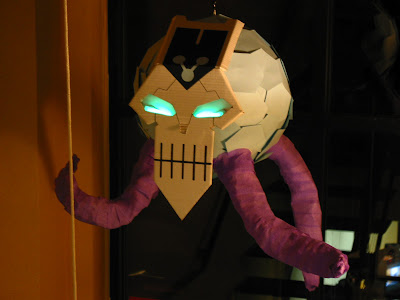 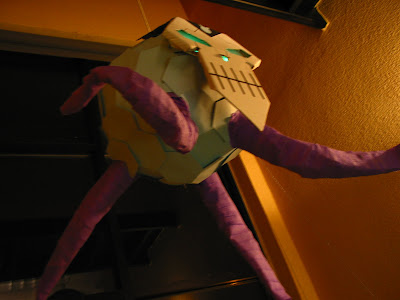 We used a light saber to hit the thing Candy and toys for all! 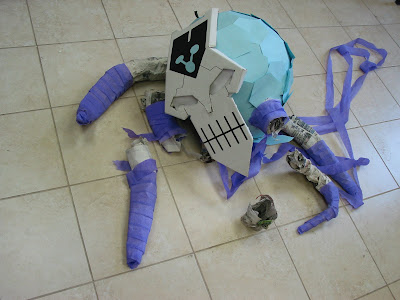