RPF PREMIUM MEMBER
For what it’s worth, and I realize it may not be much these days, my opinion is that this run will not be surpassed in accuracy on the RPF or elsewhere. If my opinion counts to you the reader, hop on this run! I dearly wish I had the funds to do so myself, and will be scanning the junkyard in the years to come for an opportunity to get my hands on this while expecting to pay through the nose to do so.
DaveP you and your collaborators are doing fantastic work on this, keep at it.

Edit: I didn’t notice that the signup was closed, but I stand by my endorsement.
Last edited: Oct 5, 2021

scarf man said:
For what it’s worth, and I realize it may not be much these days, my opinion is that this run will not be surpassed in accuracy on the RPF or elsewhere. If my opinion counts to you the reader, hop on this run! I dearly wish I had the funds to do so myself, and will be scanning the junkyard in the years to come for an opportunity to get my hands on this while expecting to pay through the nose to do so.
DaveP you and your collaborators are doing fantastic work on this, keep at it.

Edit: I didn’t notice that the signup was closed, but I stand by my endorsement.
Click to expand...

Thank you so much for the kind words! They really do mean a lot! Very much appreciated!

Yes, I'm afraid the sign up is now closed as I need to lock in the quantities at this stage. Just getting an update together to let people know where things are up to....

Hi everyone. I have just posted an update in the R&D Thread regarding some changes to the models.

It was my intention to order the CNC'd parts on Monday, but I was presented with some new information from a very reliable source! For that reason, I held back the CNC'd parts while that conversation was still ongoing.

I hope you all understand. It would have been an absolute tragedy to order the parts without taking this new information in to consideration and applying any design changes that are needed first.

Details of these changes are in the R&D post if you'd like to read about them. Any work that is required on the models will be completed today and the order for the parts will be placed as soon as they're ready.

The ordering process is well under way for the other parts, and quantities have been locked in and sent off for quotes, etc.

You may have noticed, I've marked the run as "sign up closed". This is because I really had to lock in the quantities prior to ordering. I will be ordering a limited number of extra base kits though, which I can let go an a first come-first served basis, should anyone stumble on to the thread form this point on. I'll also be ordering a few extra cone knobs in case those are of interest to people in the future.

Thanks again for taking part in the run everyone, and for your patience this past couple of weeks.

I'm so very excited that the run is now officially underway. I will keep you all posted as things progress!

Hi Everyone... I thought I'd let yesterday's revelations sink in a little before dropping another bombshell...

I've just posted another update in the Research and Development Thread

As I've said in that post, "This (again) has pushed back putting the parts for my run in to production, but I think you'd agree, it's a very good job that I held off whilst these details were still up in the air."

This again is a very easy change to make to the models. So time-wise, it's nothing to worry about. It won't have a huge impact on production either. In fact, I would imagine it may actually speed things up!

I believe that we can now go ahead with getting these made! I have complete confidence that the details discussed in the above post are correct.

Just for your information, most of the other components and materials for the run have now been ordered and paid for! I'll keep everyone updated as things progress and items begin to arrive!

Hi Everyone. I just wanted to post a little progress update to let you know where things are up to...

As you know, the revelations last week meant that some modifications were needed before the parts could be put in to production.

Thank you all for your patience while I updated the models and the CAD drawings. I hope you agree that it was a necessary delay.

All the models are now updated to the latest design and these have been sent to the machine shop for final quotation. 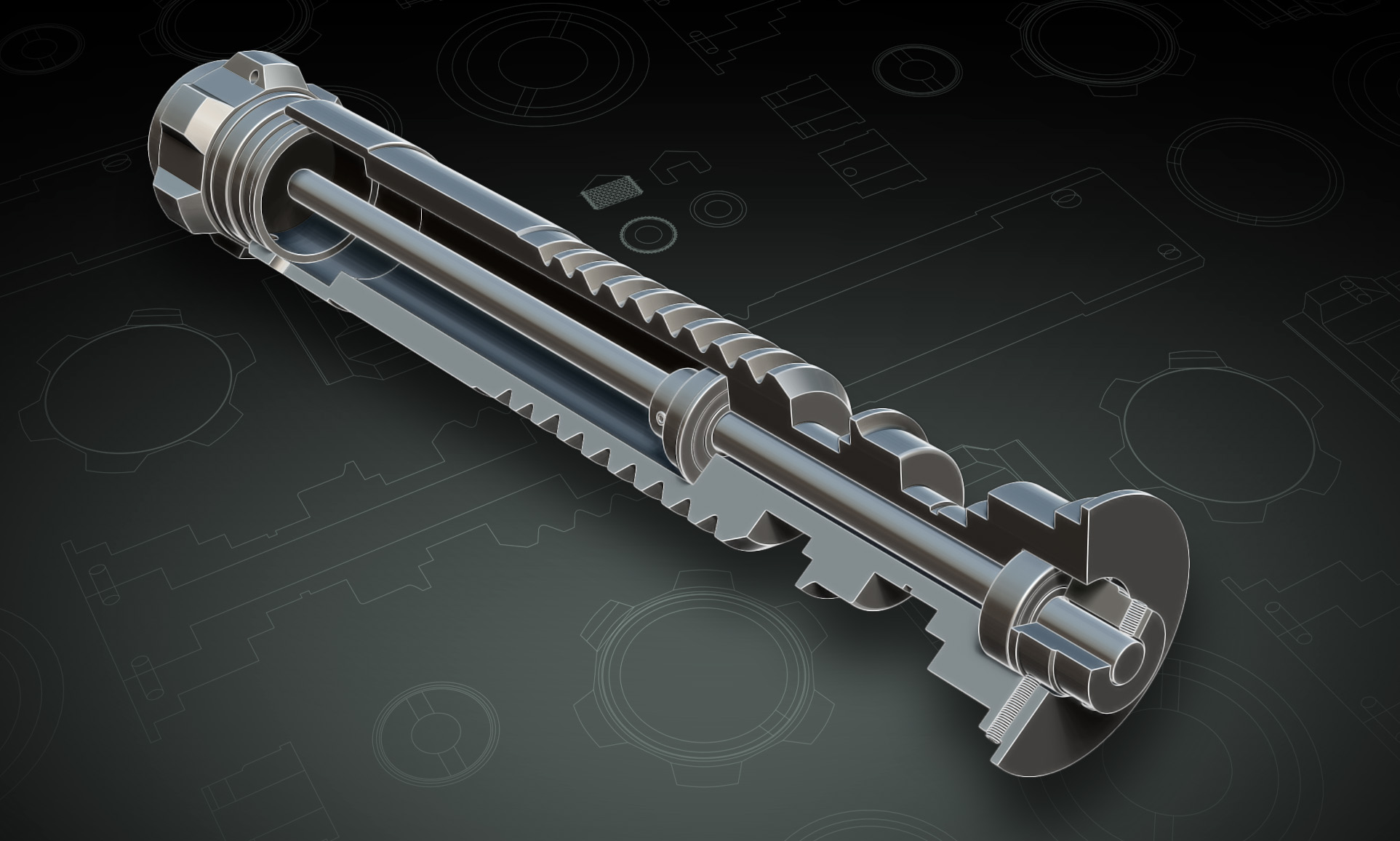 The Emitter is now being machined as part of the body section, as discussed in the R&D thread. If you weren't aware of these changes, I highly recommend that you check out the thread from this post onwards, and the subsequent discussion.

The Motorised stunt kits/commissions will remain as a single piece (save for the pommel and nipple).

The ROTJ V2 kits/commissions will have the emitter separated from the body.

By default, the base kit will be sent out as one single piece (as machined), but I can gladly separate them on request.

The emitter has to be removed in order to apply the emitter damage commission, but this is in line with the actual prop.

As soon as the final quote comes in for the CNC'd part's, I'll be placing the order.

ALL the other parts for the run have either been ordered or are awaiting final invoices!


I've broken down the interest list in to batches based on the order that things will ship when the parts arrive. The Base kits with no commission will ship out immediately (This includes the DIY Motorised stunt kits. After that I'll need a few days to get through the pommel/emitter damage commissions, after which I'll be moving on to the fully commissioned builds.

Hope this all looks ok to everyone.

I'll keep you all updated as parts begin to arrive.

Nice one Dave, Hope you had a good b'day by the way!

Hi Everyone. Just a very quick update to say that I've updated the top post to reflect the fact that the run is now in progress!

I've added a list to the end of the post to show the progress on the various parts for the run:


As you can see, the CNC'd parts are now "In Production"! The blades haven't been invoiced yet, but the order is in, and they're scheduled for November delivery.

I've also added a couple of new images (and removed some of the older/out of date ones).

Just some new cutaways to show the Base Kit/ANH Motorised Stunt/ROTJ V2: 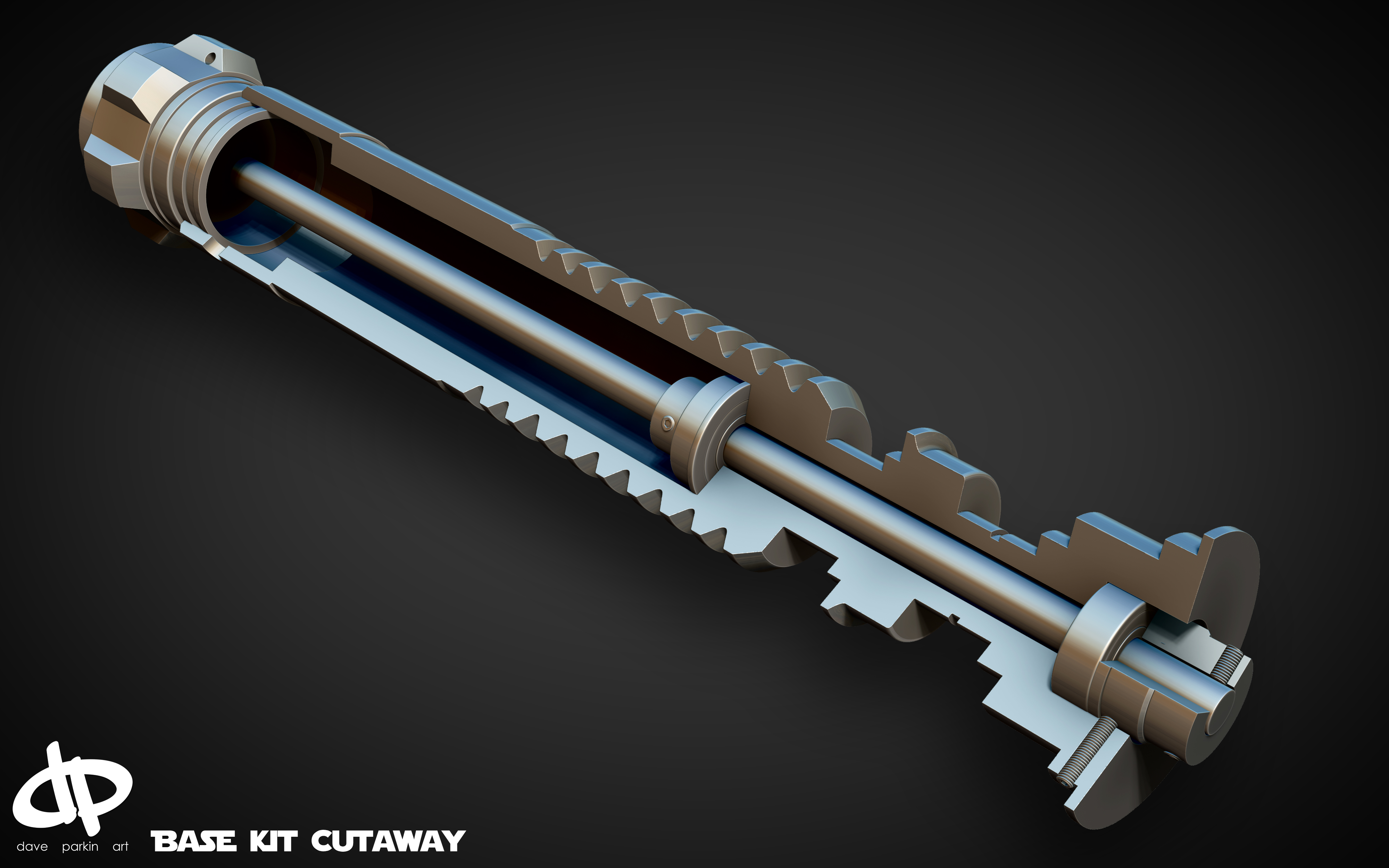 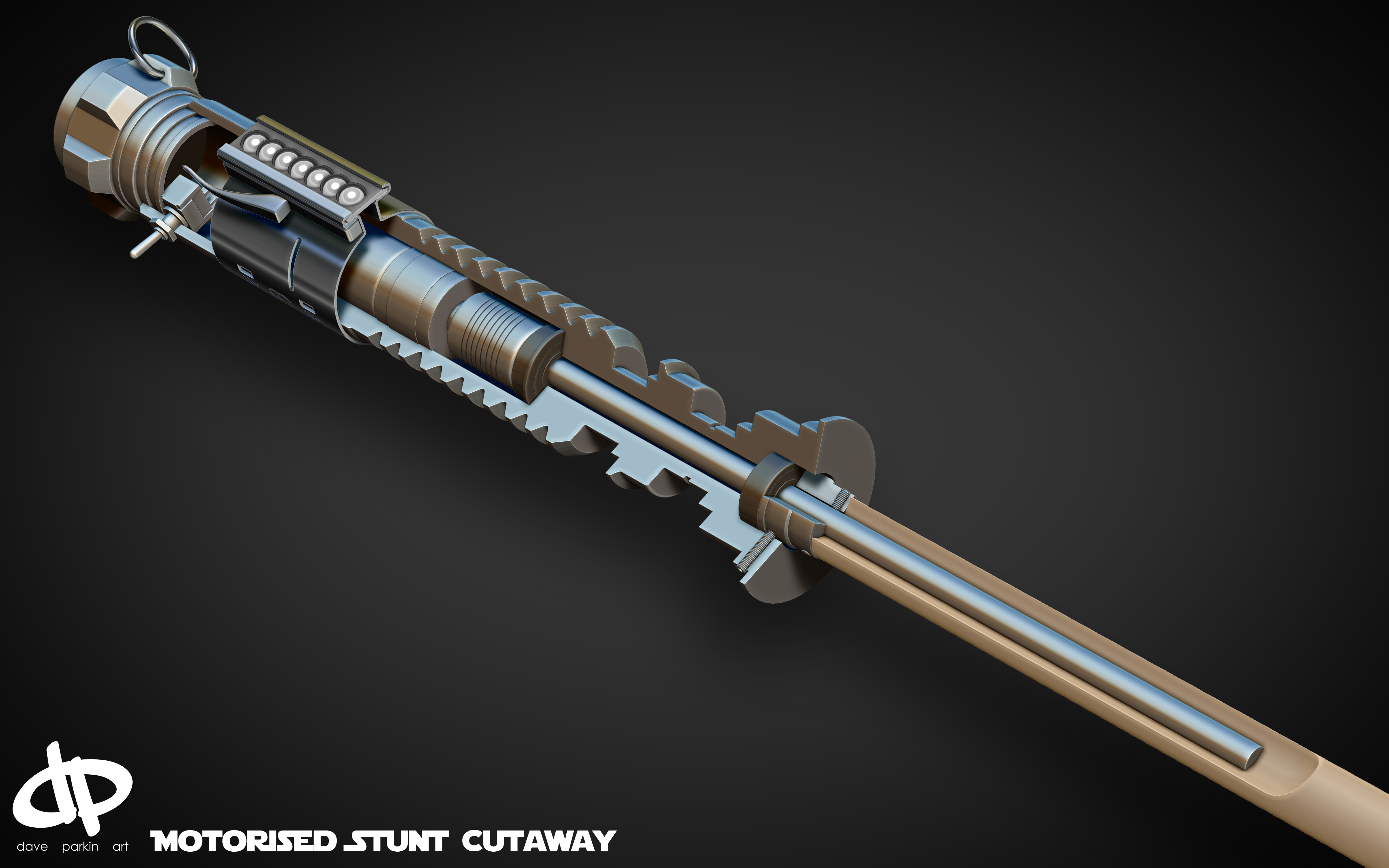 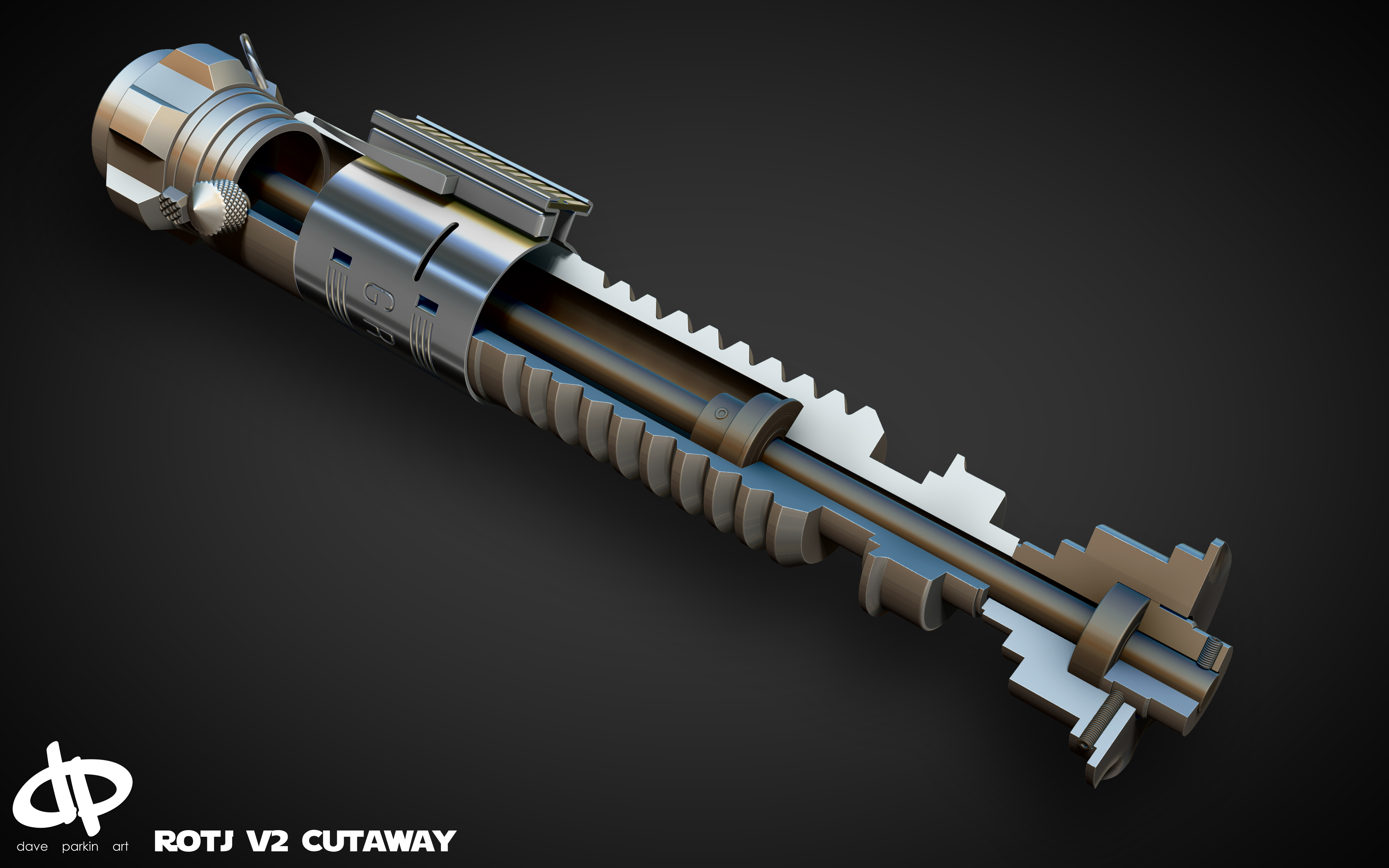 As always, I'll try to keep you all as updated as possible as things progress.

All the best, and MTFBWY,

RPF PREMIUM MEMBER
Goodness me Dave.
They are something else.
Can't wait