I dunno, 7 bills? No description? Plastic? Fiberglass? No who made the helmet? Think I'll pass...

Don Post Standard. Plastic. Smaller than 1:1 scale, and not accurate to the original. They average $40-45. But with Prowse's signature, I've seen them offered for much more than the base price.

RPF PREMIUM MEMBER
I don't know, look at the nose of the Amazon one. Looks like the silver part is an actual separate piece, note the "lip" sticking out around it. It could be a CA, but it doesn't have the tusks, and the dome looks like a standard.
Last edited: Feb 18, 2015

RPF PREMIUM MEMBER
No, its a standard Rubies iirc. They continued producing that helmet after DP quit.
R

There are two worlds....the RPF world where we detail everything down to it's value based on what we know and/or can build.

Then there is the OUTSIDE world...where others without the talent to build and/or the knowledge to know....STILL love the movies and want a piece of that memory.

Worth is always what someone else is prepared to pay, regardless of knowledge or talent.

699,00$ for this piece of ...äh..a toy......haha...I think when Dave could become this amount for every signature he would have more money as George Lucas!:lol

You mentioned Hasbro, so it's also possible it's the Voice Changer helmet, which is, in turn based on the Don Post "Standard" (as we call it). Perhaps Hasbro updated it with nose inserts since the last time I stopped looking at it.

First, notice the overall shape is consistent with the Hasbro, particularly the way the cheeks terminate into the sides of the nose, and the great distance it leaves between where it ends and the edge of the nose:

Here is the Hasbro product (right) next to the Don Post product (left). And, like in the Amazon item listing, the Hasbro's cheeks terminate over the upper tusk tubes:

Compare the Amazon photo with the picture below, which is a Don Post Deluxe which is closer to the original prop than the Don Post Standard / Hasbro Voice Changer will ever be: 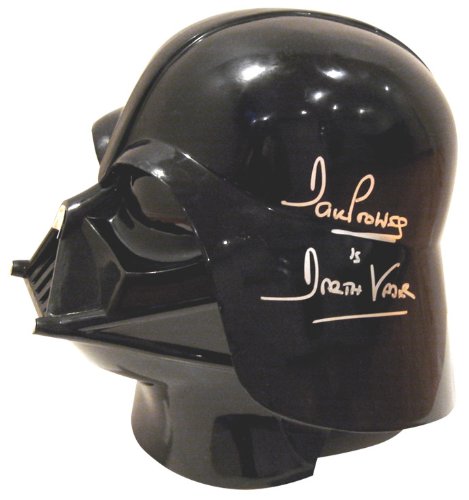 RPF PREMIUM MEMBER
Another thing I just noticed about the Amazon one, look at the top of the cheeks below the eyes. No thumbnail indents? And the lower "eyelid" is far more pronounced than on the examples you've shown.

gunnerk19 said:
Another thing I just noticed about the Amazon one, look at the top of the cheeks below the eyes. No thumbnail indents? And the lower "eyelid" is far more pronounced than on the examples you've shown.
Click to expand...

Note that Hasbro's interpretation of the Don Post lines up quite well and yet differs here and there. Hasbro can do their own thing and update their product with tweaks any time they do a run, but the basic premise is that this is child-sized and has no lineage to the screen-used original.

The only last thing I can think of is that this is actually the Rubie's take on this, as they had gotten hold of the templates from the old Don Post Studios and their version doesn't seem to have nail marks as far as I can tell. The lower eyelid is strongly pronounced, but all three are essentially from the same mold:

If you feel like taking the risk, buy one and share pics here on RPF. You'll be our hero!

RPF PREMIUM MEMBER
I checked a few more places, and it does in fact look to be a Rubie's. That nose insert is throwing me off though. :unsure

Yeah, they did the nose insert for the Rubie's Supreme / Deluxe Vader 1:1 helmet. Wouldn't be surprised if this one followed suit.

Today at 1:19 AM
Darth Fok
D
T
What steps did the ANH stunt helmets go through to become ESB?