Some of you may know that I'm a leather worker, and also an aficionado of 18th century clothing.

A while back, i decided to undertake crafting myself a set of stays (an early concept of a corset) to possibly replace the fabric pair I had made several years ago. Here's a look at what those fabric stays look like: 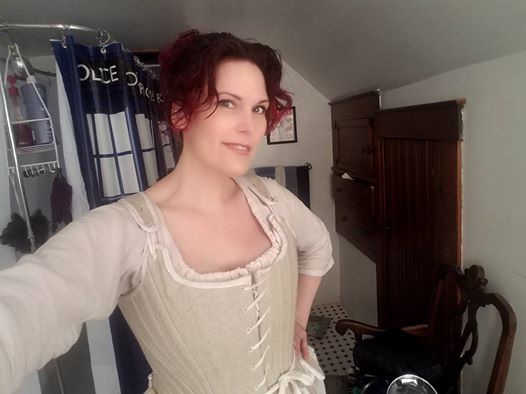 Taking the pattern from these stays, i decided to try building a set from leather: 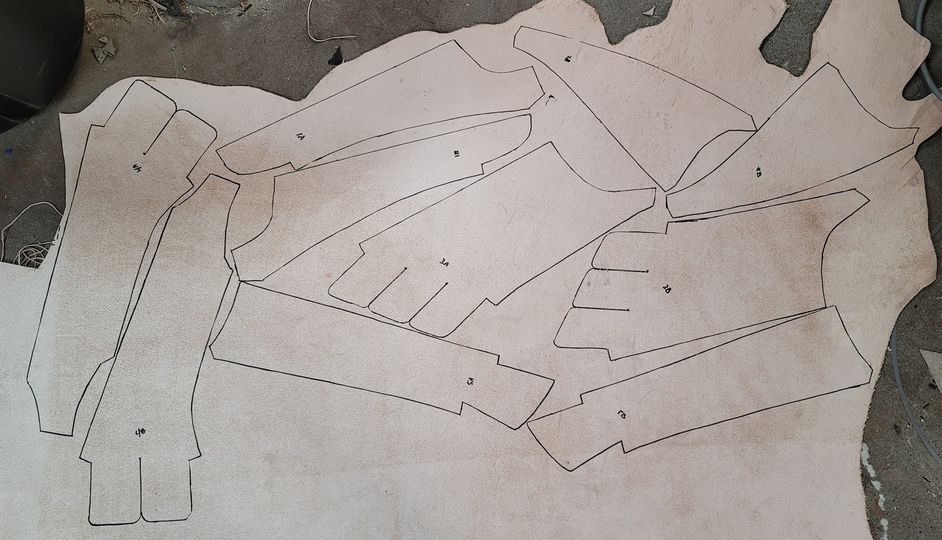 Once they were traced on the back of this veg tanned hide, I cut them out and began hand stitching them together at the seams. Once I'd assembled the front and side front panels, i decided to try my hand at some decorative tooling: 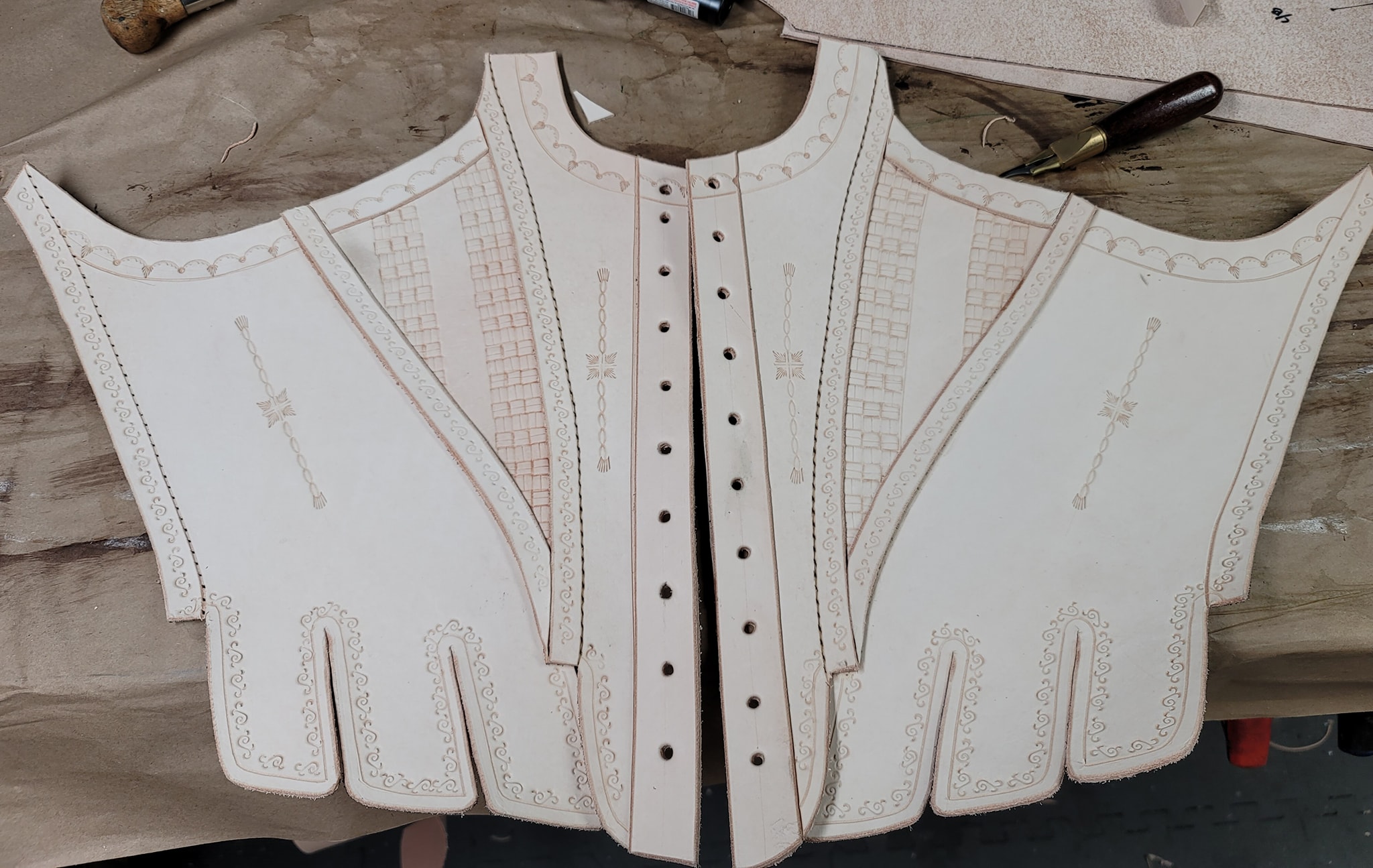 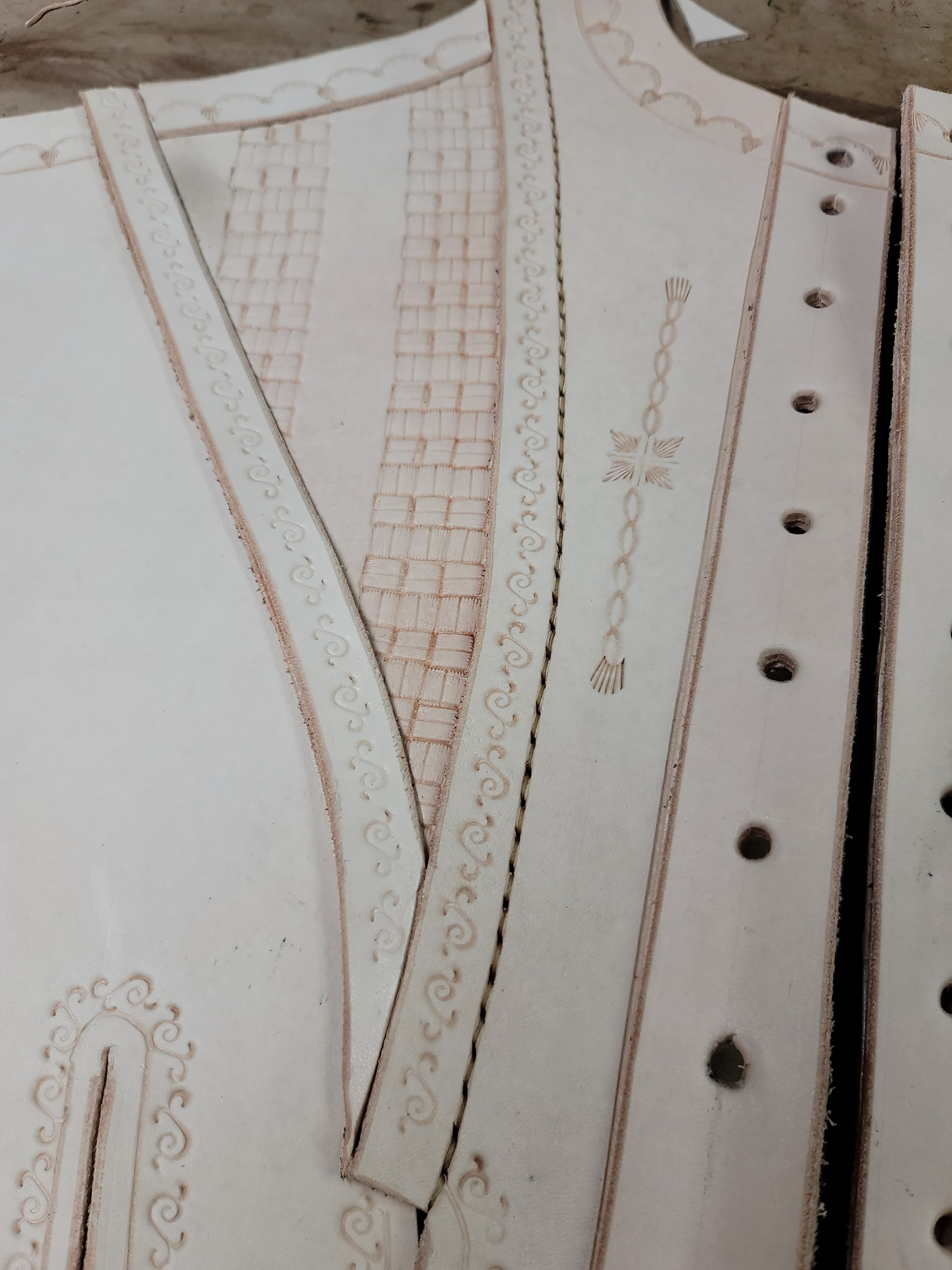 I finished stitching and tooling, and then decided to have a try on: 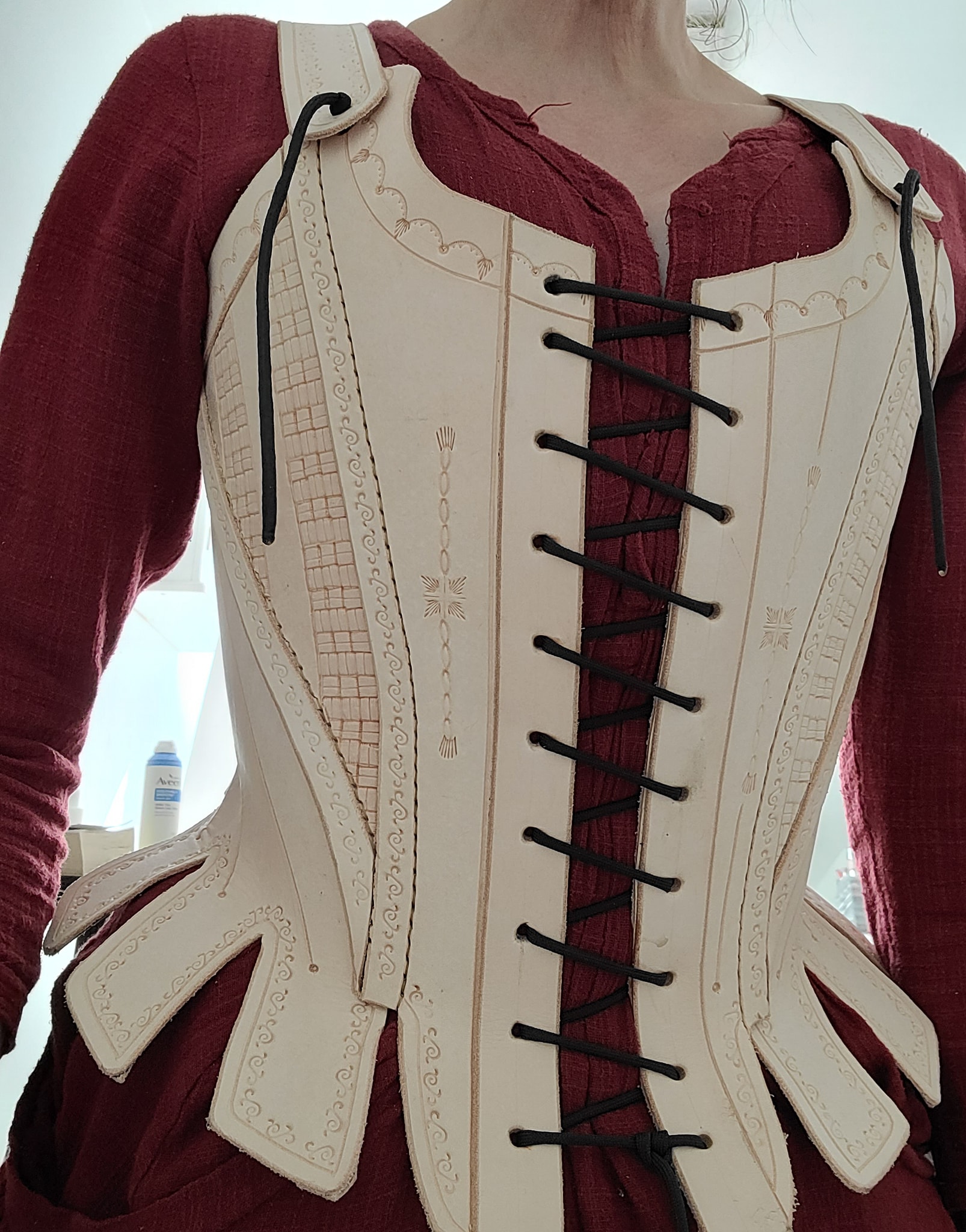 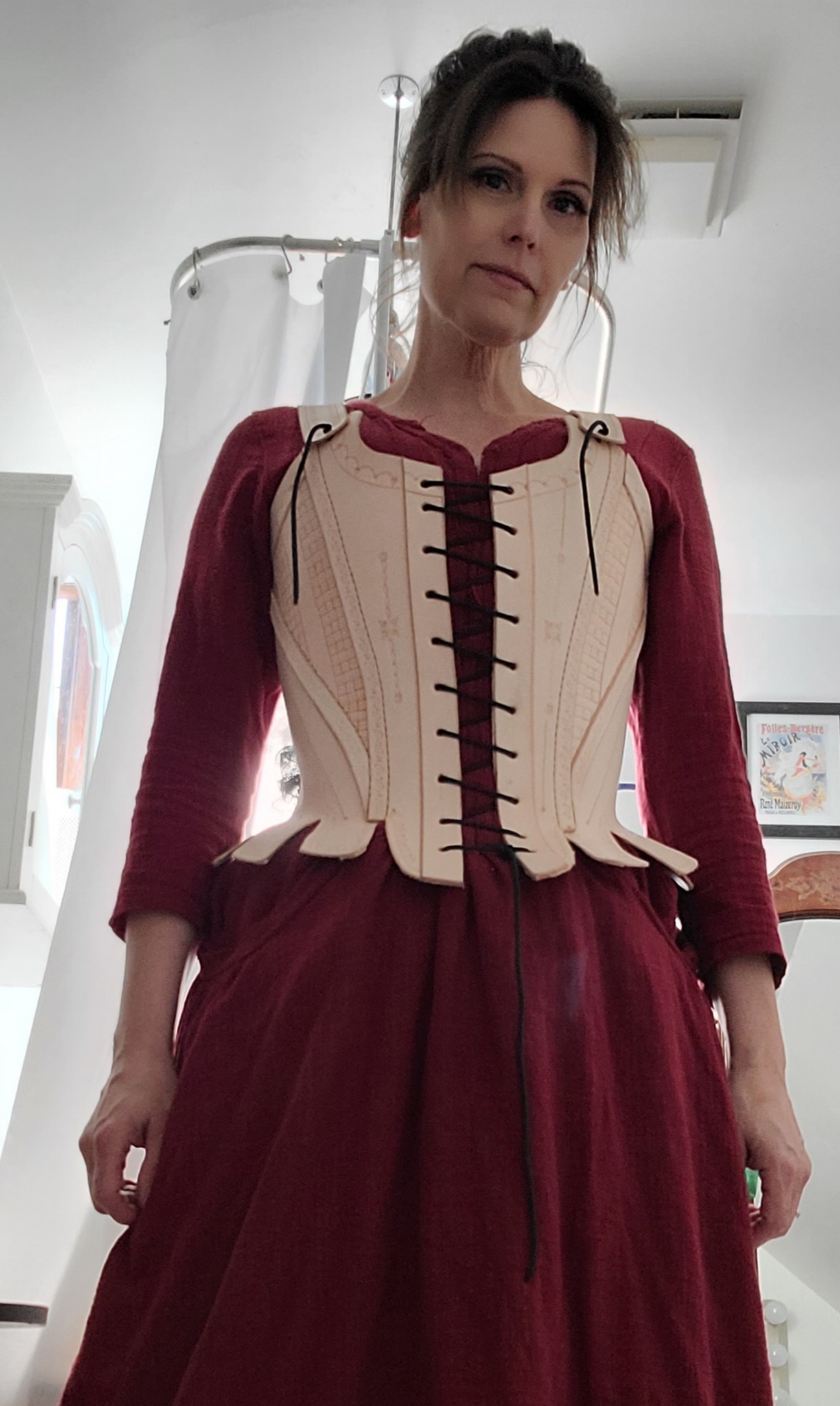 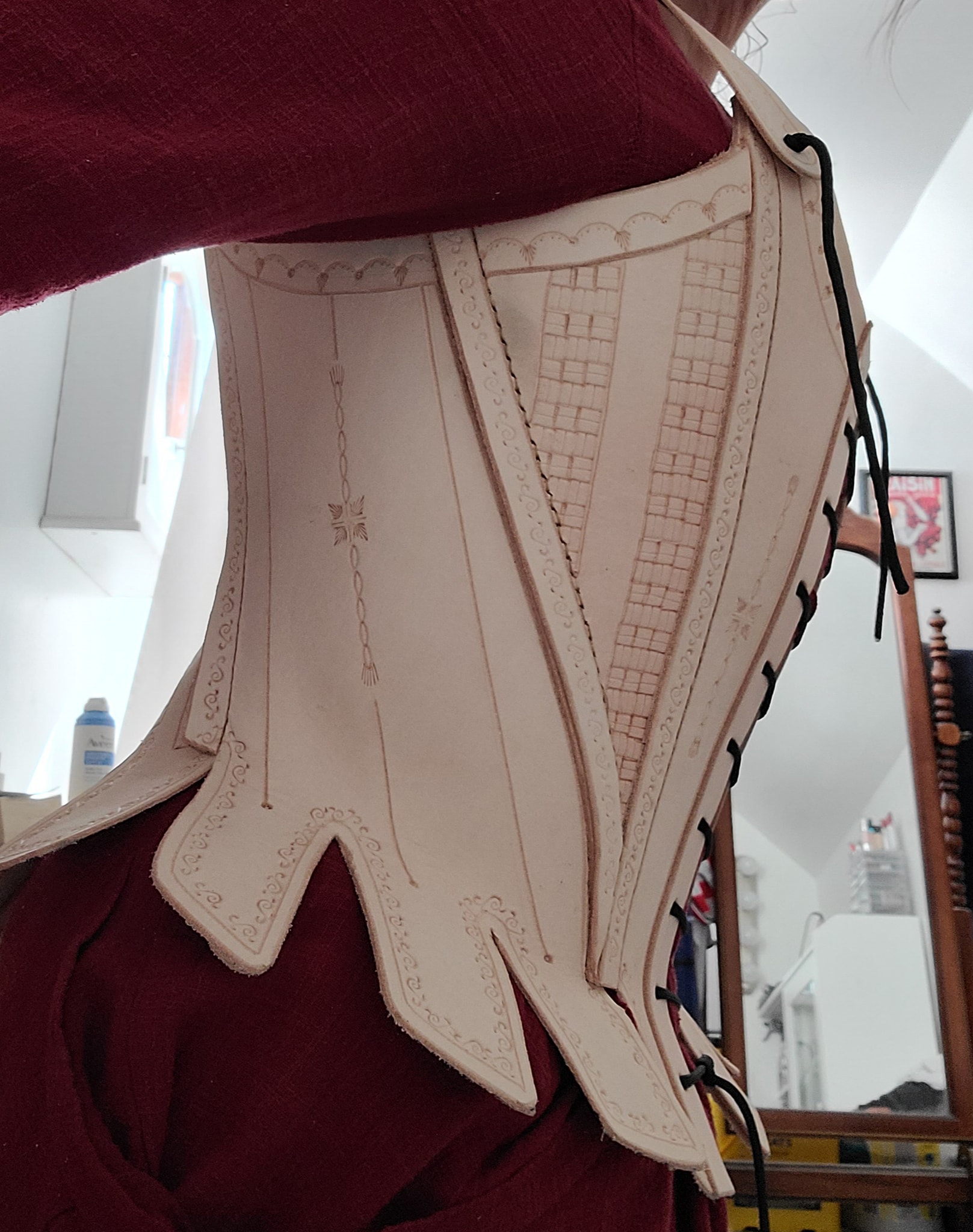 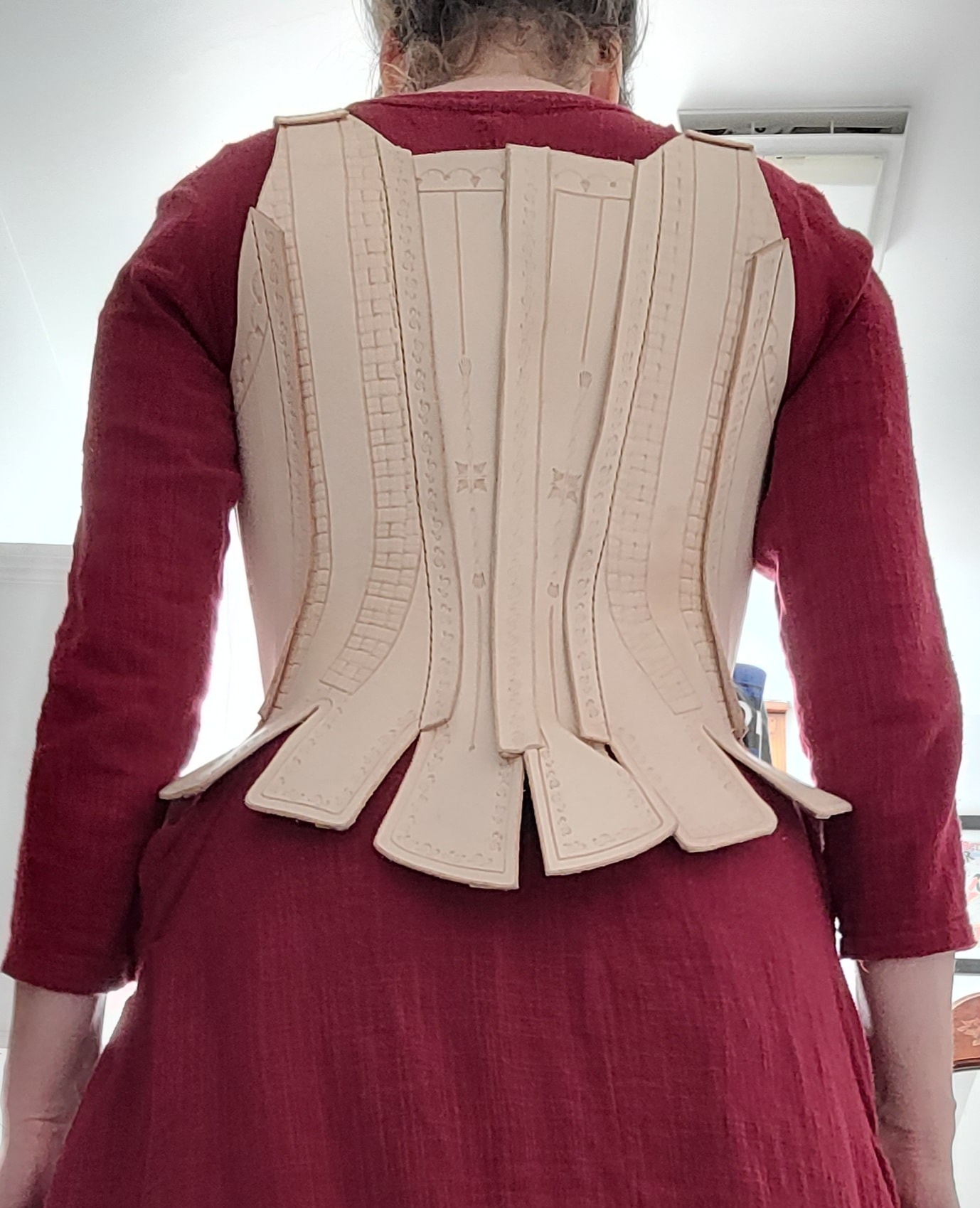 With this step finished I was pretty happy with the preliminary fit. It was time to dye the stays, and weather them... as I'd decided that i wanted these to be worn on the outside of my garments--instead of underneath--as is traditional. I thought they were just too pretty to cover up. So after some dye and dirtying, they looked like this: 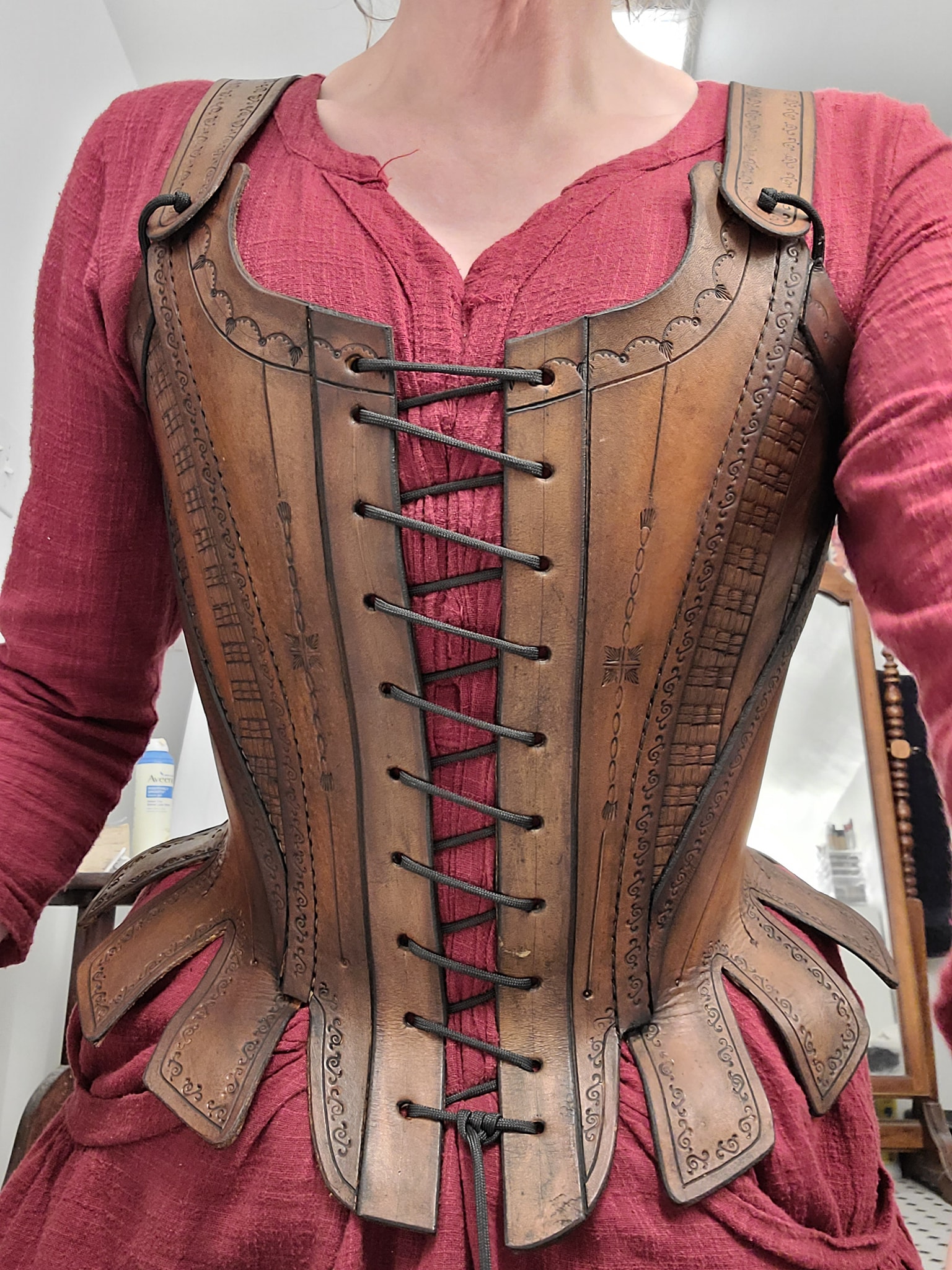 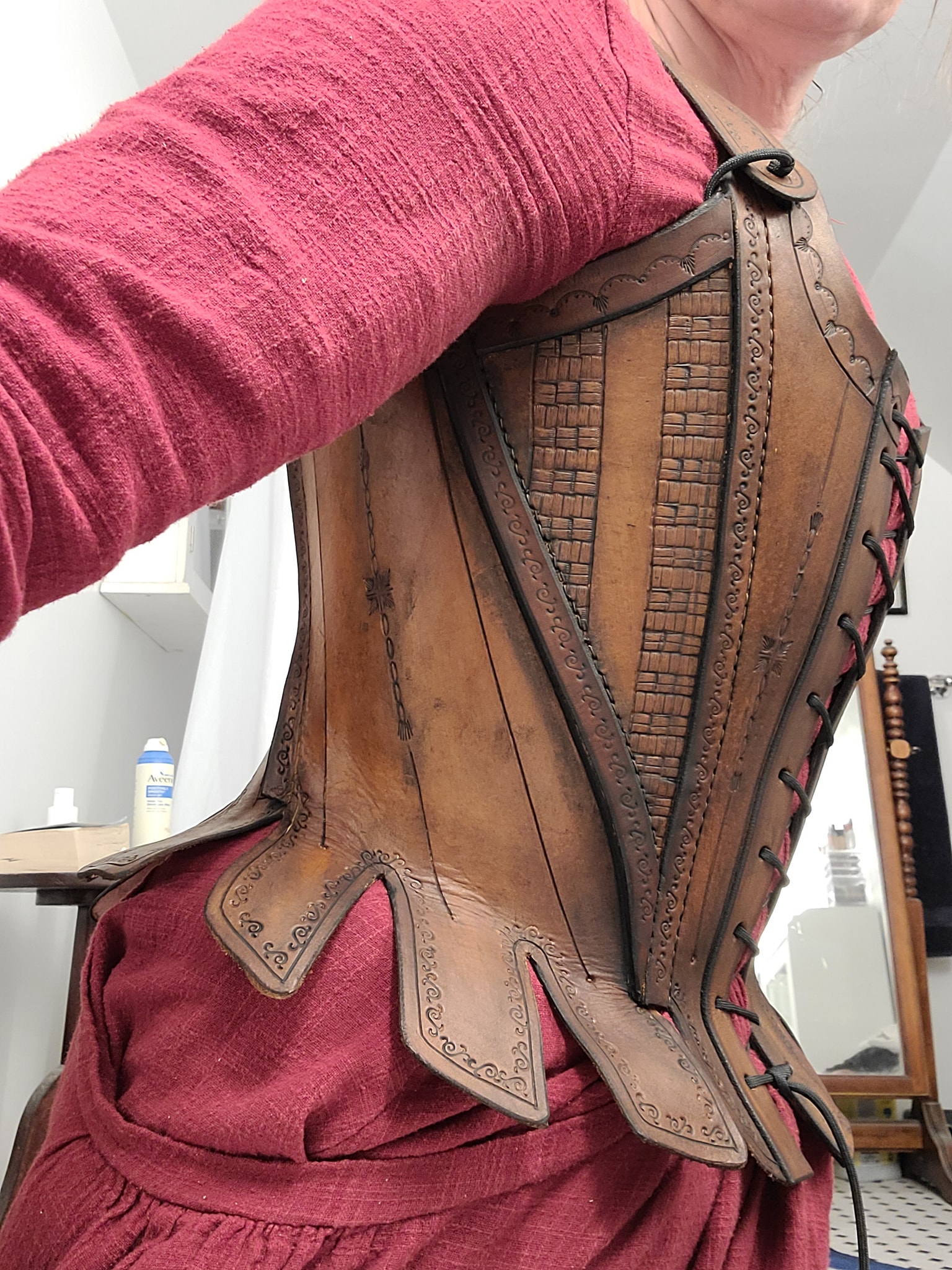 Satisfied with their finish, I decided to try and evolve the concept of what i would wear underneath. I started with this arrangement (it should be noted that I'm wearing a prototype version of the leather stays in these photos... that's why the tooling and fit is different) 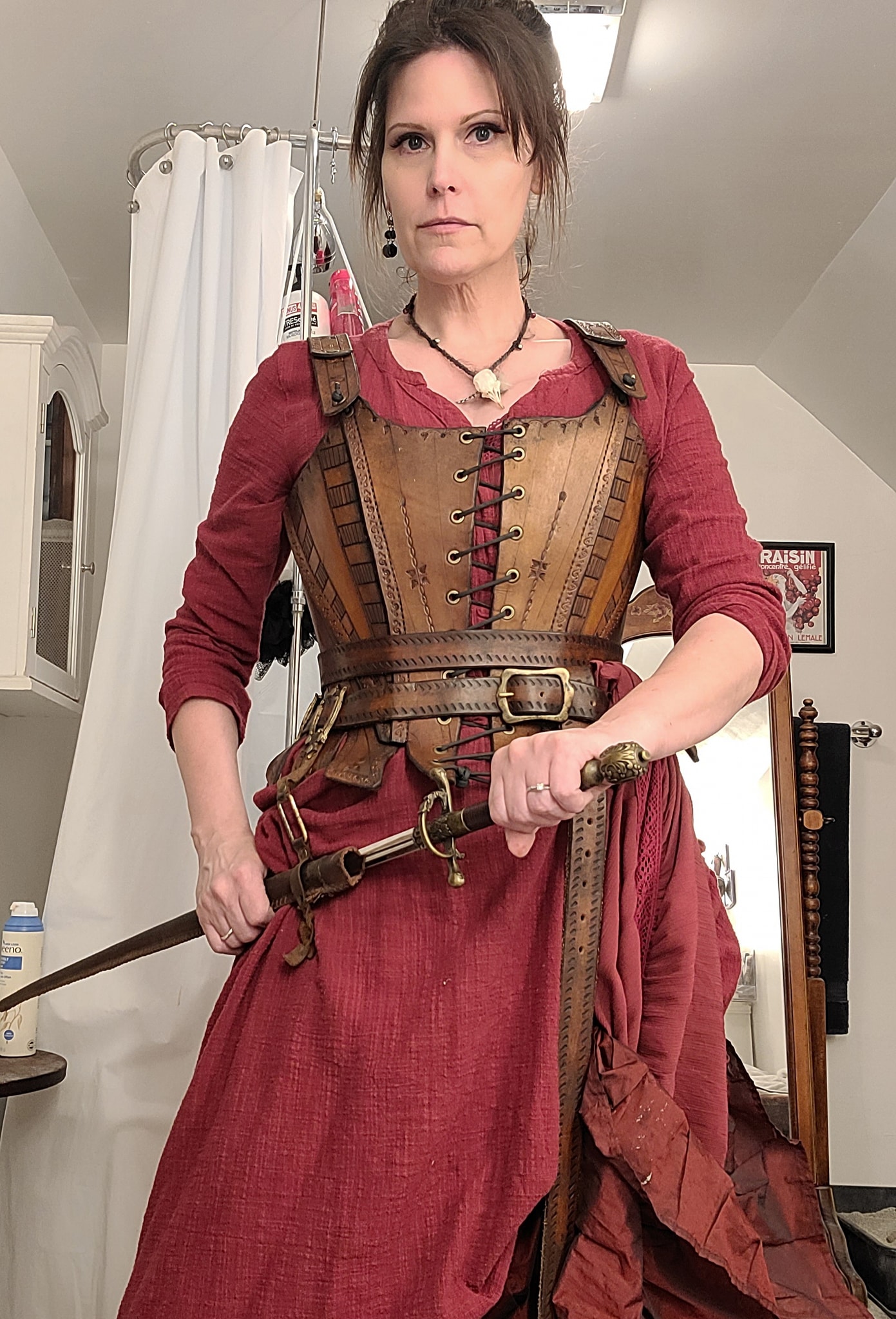 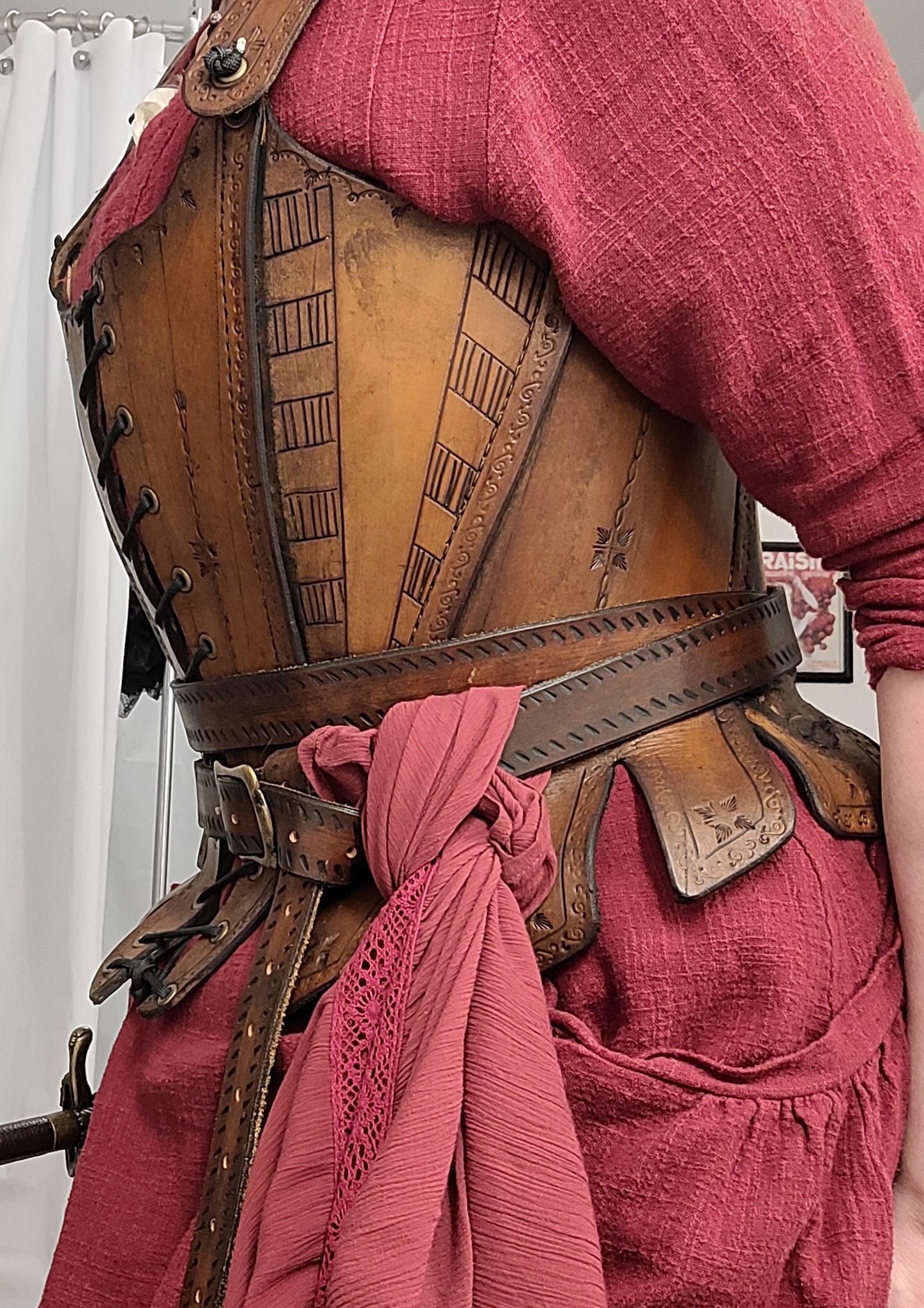 I like the maroon shift, and the tiered silk underskirt isn't *bad*, but I wanted something a bit more eclectic. Since the stays needed to be broken in anyway, I decided to wet them down, lace them on and wear them to work today, so that they could be formed to my body. During that process, I came up with the idea for this version of the whole outfit (NOTE: I didn't wear the sword to work! )

Imgur is now giving me an error and I can't upload the other two views right now, but what do you all think of this vibe? I'm still planning on evolving it going forward, but would like some feedback.

What if you were to add a leather wristband or short bracer and perhaps a flintlock pistol or some other historically appropriate sidearm?

Digging the Boots as well!!

I like the idea of a matching leather bracers, or maybe even an archers single bracer, (i dont know what they are called) but a bracer for just your right wrist to protect you from getting twanged by the bowstring.

What if you were to add a leather wristband or short bracer and perhaps a flintlock pistol or some other historically appropriate sidearm?
Click to expand...

it's funny you should mention a flintlock--as I have several, and I tried one with it that very mornign when I was getting dressed. i think i absolutely will.

I also considered making a removeable shoulder pauldron to protect my sword arm, but I like the idea of the bracer better! I may also make a leather stomacher to go behind the gap in my lacing.

I was also considering giving this outfit another twist by wearing my Rose the Hat hat with it.

I really do love these boots... but they are positively falling apart! I've had them for probably 10 years now, and they aren't very expensive, so the finish is flaking off and I've had to resole them as well. They aren't made anymore, so i might just tear them apart and pattern them to make a replacement pair from real leather.

Uridium said:
I like the idea of a matching leather bracers, or maybe even an archers single bracer, (i dont know what they are called) but a bracer for just your right wrist to protect you from getting twanged by the bowstring.
Click to expand...

i love that you assumed I'd carry a bow. i very likely WILL! And I like the idea of a single bracer as well. I also considered a shoulder pauldron (removeable) in the event that i want it to look more medieval on occasion
Last edited: Jun 26, 2021

That turned out great and the whole thing looks good together.

So happy with this El Fett Deadpool mask!