O.K. Lets start off properly with saying that this was directly inspired by Julie(ei'luj) and her timers:
http://www.thehunterslair.com/index.php?showtopic=16003
She makes a couple different versions so you can contact her if you need a countdown timer setup.

I'm making this gauntlet to match my blade gauntlet:
http://www.thehunterslair.com/index.php?showtopic=15510 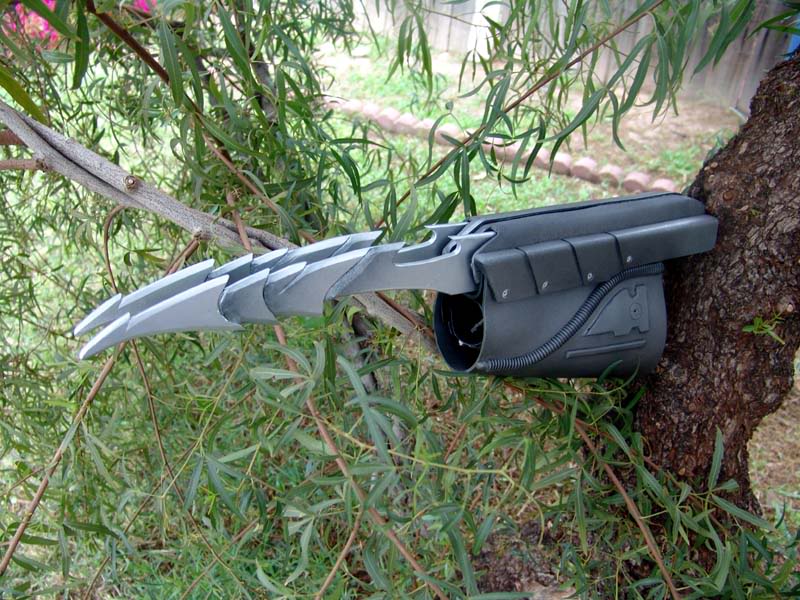 I made the prototype curcuit with a breadboard and Arduino microcontroller. Then when I finally decided to make this I got a BoArduino that is smaller and has the same capabilities (and IC). I picked up a protoboard and went to town installing the components.

Here is the video of the sequence (note that they are the same video)
http://www.youtube.com/watch?v=qoHNyCHicEg

I made the wrap using the same template from my blade gauntlet to make sure they were matching and added a platform for everything to go on. 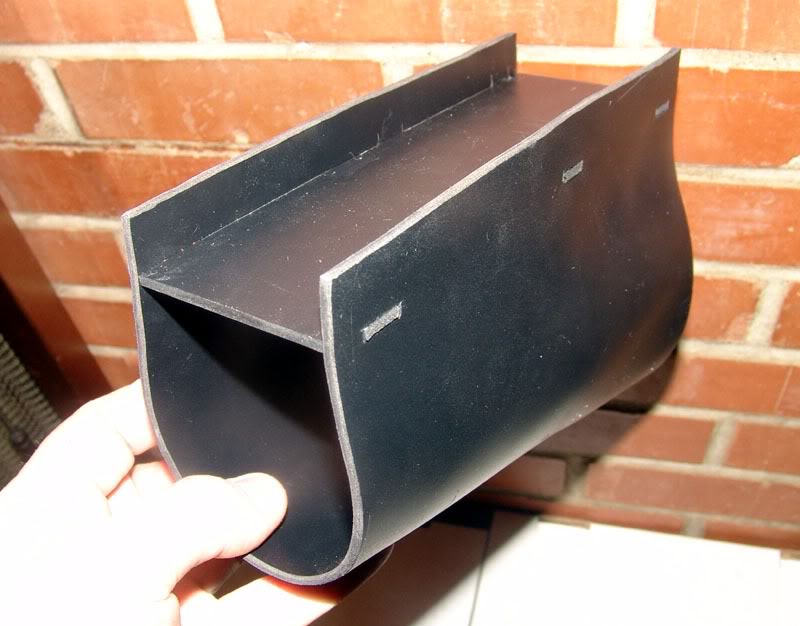 I cut the board down to as small as it will go and added the spacers to keep it level. Yes, behind the scenes isn't very pretty. 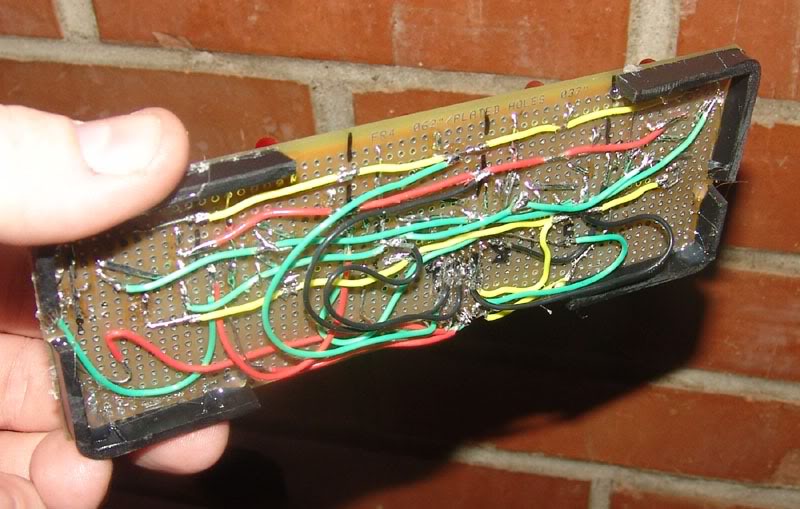 The testfit into the housing and make sure that I can arrange it to look good. 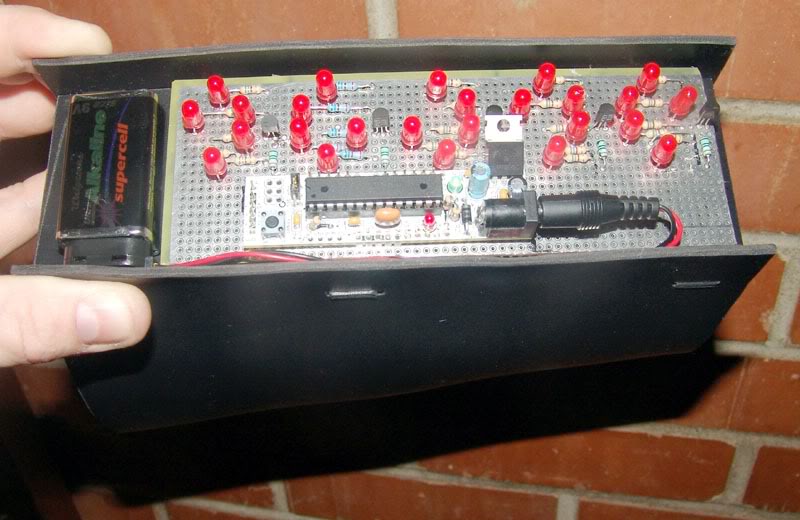 I'm going to add a button to make it start after it powers up. I did intend on it powering up with a limit switch but for now I cant find the one I have so I'l need to figure on something else to start power. If that needs to be a toggle switch then so be it.

Anyway, that's what I have for now.

Your gauntlet material is sintra, right?

Here's some links for some switches that may fit your needs:

Pretty cool stuff. I checked out your YouTube video and ei'luj's thread as well, and they're giving me some inspiration.

I noticed that you have 25 LEDs, but from what I can tell, the Boarduino has 14 digital outputs and 6 analog outputs. Are some of those LEDs being run off the same pin? I haven't studied the sequence from the movie too carefully or anything.

el'luj,
Your welcome and thank you for the links.

Apparently the type of switch I lost is a sub-miniature snap action switch. I think that would be a great switch for power with the lid activation. Plus I had one already. I could find it still, it shouldn't have gone far(I hope).

Elkman said:
I noticed that you have 25 LEDs, but from what I can tell, the Boarduino has 14 digital outputs and 6 analog outputs. Are some of those LEDs being run off the same pin? I haven't studied the sequence from the movie too carefully or anything.
Click to expand...

Yes, I only use 10 digital outputs. Its a 5x5 matrix using multiplexing. I should have said something about it but I didn't think it would have been too interesting.

5 of the outputs are set up for the individual LEDs in a digit. The other 5 turn each digit on and off, each of those outputs handle the negative of up to all 5 of the LED's in a digit and therefore need to have the transistor to avoid over currenting the digital out.

My programming turns only one digit on at a time. The sequence has all of the digits off, then the number of LED's is set as the ouput and then one digit is turned on. That goes through all five digits then repeats until the next set of numbers is set.

The drawback of this exact setup is that the LEDs will never get a full drive current and not be as bright as they could. One way of doing it 'correctly' is using a shift register to set the ouputs. I didn't want to fuss with it too much since this was going to work. I didn't plan on making a gautlet originally either. I did it to explore the multiplexing concept.

The sequence I used is based on what ei'luj used from AVP. I wasn't trying to do it exactly. With the other outputs I could have made more LEDs in the digits but I didn't think I needed it for the 'wow' factor. I do have good conrol over what the digits look like and how long the sequence is.

Those are pretty cool,look forward to the final project.Really like the wrist blades also.

Here is what I think you said.(Esto es lo que creo que usted dijo.)
hi i am new to this forum, I'm from mexico and they do not understand much English so do not make my presentation podidio eh so hopefully I apologize I could help them to quickly comment that I also am trying to do my predator with help of a friend who works the latex and different materials, as well the project starts I start to upload photos, but I would like to know how much it costs arduino microprocessor because the truth I have no idea, hopefully I can help, and promise to have my presentation as it should be, many thanks to all!

This is the Boarduino that I used. It is a smaller version of the Arduino. (Este es el Boarduino que he usado. Se trata de una versión más pequeña de la Arduino.)
http://www.makershed.com/SearchResults.asp?Search=boarduino

It's good to say "hello" to everyone in this thread. (Es bueno decir "hola" a todos en este hilo.)
http://www.thehunterslair.com/index.php?showtopic=15896

Thanks Master, I was searching for a good and working way to make working gauntlets.
I will use a different (more ancient) form of blades, but the basics (if it's OK?) I'll use your way dude.

ancientpredator said:
Thanks Master, I was searching for a good and working way to make working gauntlets.
I will use a different (more ancient) form of blades, but the basics (if it's OK?) I'll use your way dude.

No problem... Thanks for the credit but I'm not the first to have these ideas.

Anyway, there is a ton of talented people making stuff and I'd love to see a varient I inspired.

I digress, this is the timer thread

**my disclaimer**
If anyone is going to attempt to use an Arduino/Boarduino type microcontroller please keep in mind that I have a technical background and some experience in C++. You will need lots of patients if you have neither.

An experimentation kit like this one is what I started with.
http://www.adafruit.com/index.php?main_pag...products_id=170
This specific kit is a great start to understanding the Arduino because it is geared toward the beginner. It includes a variety of components to play with and layouts on paper of the projects. They (adafruit) also has online versions of the files that helps with the 'copy and paste' coding.
Last edited by a moderator: Aug 2, 2017

(Warning: Techie content ahead.)
One thing I was thinking about earlier was using the 4511 CMOS IC to drive some LEDs in a display. The 4511 takes a binary-coded decimal (BCD) input and drives a seven-segment LED. I was also thinking a similar 4000-series counter to create the count.

However, now that I think of it, I could combine the two approaches: I could use a microcontroller to send numeric inputs to the 4511 drivers, which would then light up in a pattern mostly like Yautja lettering. The microcontroller could be used to generate the count. (Or, if you want a digit to be off, then just send some invalid BCD value like 1111.) Another advantage of the 4511 is that it can source up to 25 mA of current, so your LEDs could light up to their full brightness.

I've used the BASIC Stamp before, so I might either use that again, or use the Arduino. I used the BASIC Stamp in my Godzilla costume to make the lights in the spines come on slowly instead of all coming on at once. It may have been overkill, but it was a cool techie thing to do.

Come to think of it, fully functional countdown timer gauntlets are a cool techie thing to do.

Plus an Enable that lets the input change the output or not.

Those features would be useful in the countdown when combined with the microcontroller.

(idea: the display starts off all unlit. You have four switches each under the LEDs, then as each is pressed, the LEDs near it light up. Pressing another switch would start the countdown....)

as I said the other night at Glen's that thing looks KILLER...cant wait to see it finished!!!

I've gone through curcuit example 1 from the Arduino tutorial:
http://www.arduino.cc/en/Tutorial/ShiftOut

This is my display lens. Not quite was I was thinking about but it does seem to work. Once I get the buttons figured out there'll be enough room for them. 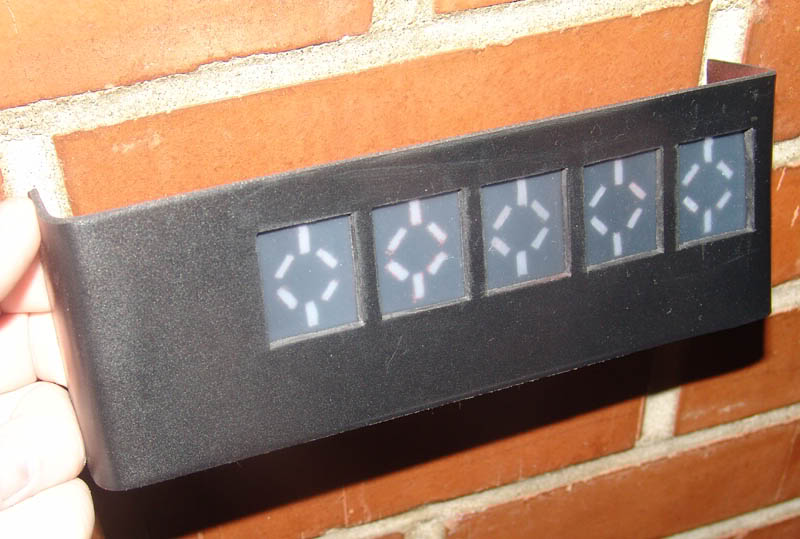 So very little progress in such as a long time...

Things ended up more complicated then I wanted. I'm taking my a few liberties with this gauntlet too. I'm happy with how it's coming along.

I got the lens cover on and used hanger as cross pins. I got it hinged on one end and pinned down on the other. The swich to turn it off works good with the cover closed. The cover is hinged with cloth. Not my first choice of hinges but it works. 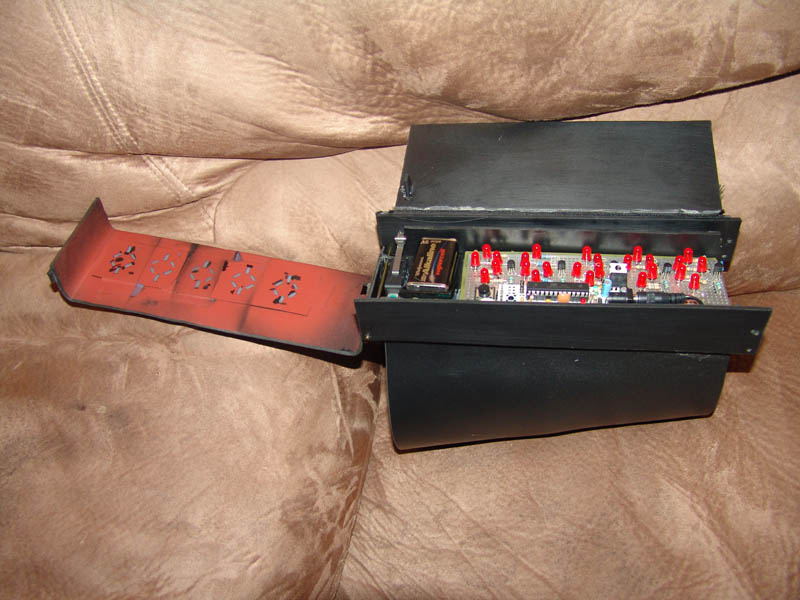 It's a little too clean looking but I'll get it matching the other gauntlet good enough.

hey shawn can u make me a countdown board for another project im going to be doing???
let me kno thanks man
~MM

I'll see what I can do. I PM'd you and I'll call you later today.

where did you get the coutdown timer to take apart like that?

The small board of electronics in a smaller version of the Arduino call a Boarduino. I had do write the code to display the output that you see.. The bigger board and its components I made from parts.

The gauntlet is still pretty much the way it is in the picture still. I haven't had it on my priority list. I have the activation switch working fine so when the lid is opened the countdown starts cycling. I was going to add another button to select the duration of the countdown.
M

It has always been interesting for me to develop different subjects!

I am curious why you do not us a rectangular shaped LED?