RPF PREMIUM MEMBER
So I recently bought a couple of Coughtrie lamps, and have posted about them. The topic has also come up here over the years, scattered across various threads. However, I thought it'd be useful to combine the known information about these things into a single post for reference purposes. Here it is.

Coughtrie is a small Scottish company, founded in 1939, that manufactures industrial and commercial lights. They're known for solid and weatherproof, if not particularly high-tech, lamps that basically consist of cast aluminium shells, ceramic bayonet British lamp sockets, and incandescent light bulbs. Their lamps are seen across the UK, often on the sides of old factories and housing estates. Nothing particularly glamorous. The firm still exists today.

One of their lamps, the SW10, was first made in the 1950s or so, and consists of a solid metal shell with fins for radiating the heat from a tungsten bulb, a rubber (formerly cork) gasket and metal retaining ring (rated IP65), a glass dome or "wellglass", grease-lubricated stainless steel screws to hold the base and ring together, and a curved swan neck metal conduit. Optional dish-shaped reflector. The base and ring are cast aluminium, usually enamelled with thick grey, white, or black paint to protect the metal from the weather and conceal the somewhat rough casting. 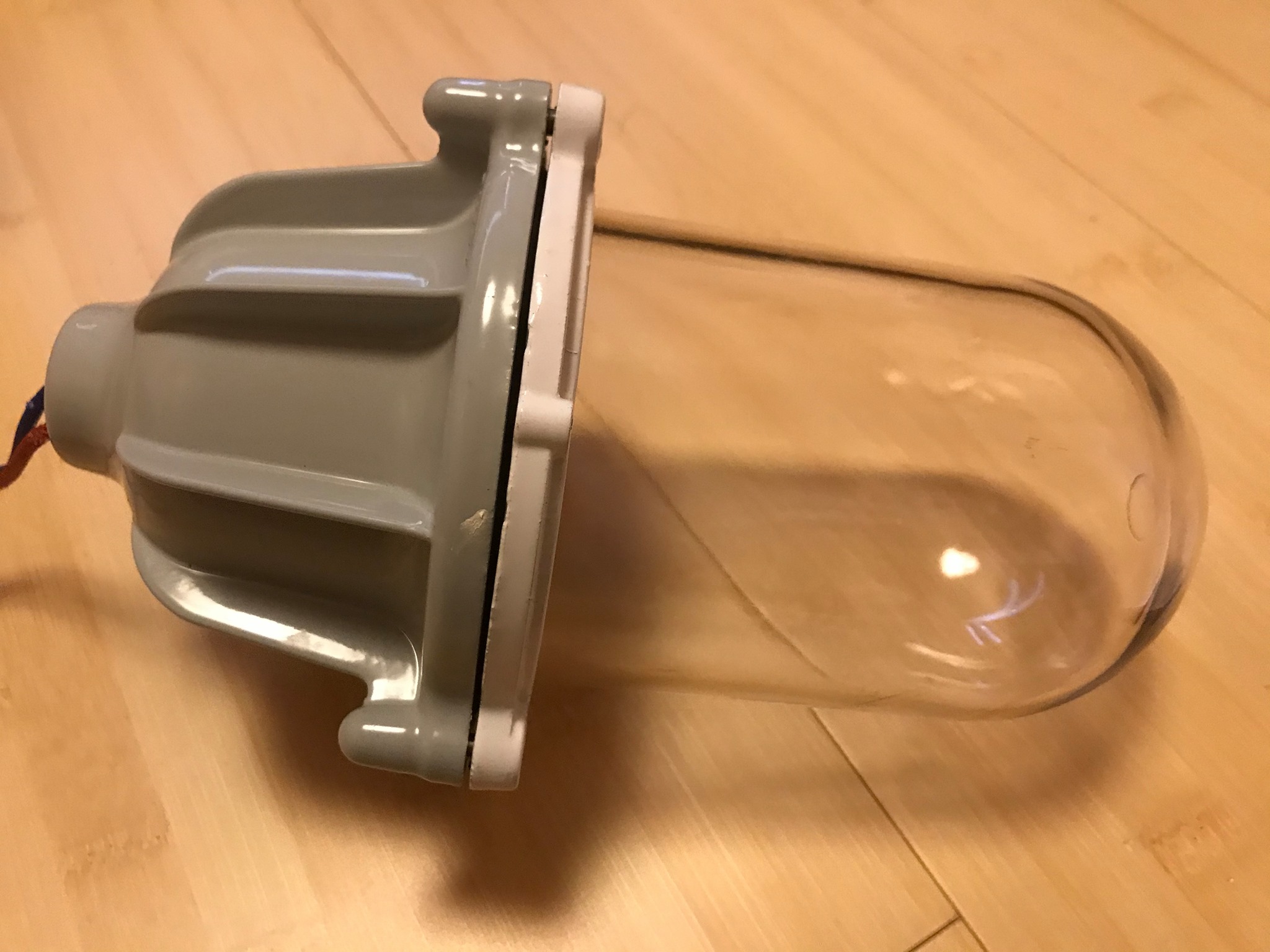 The lamp shown here was probably manufactured sometime in the 1990s, and is new old stock. 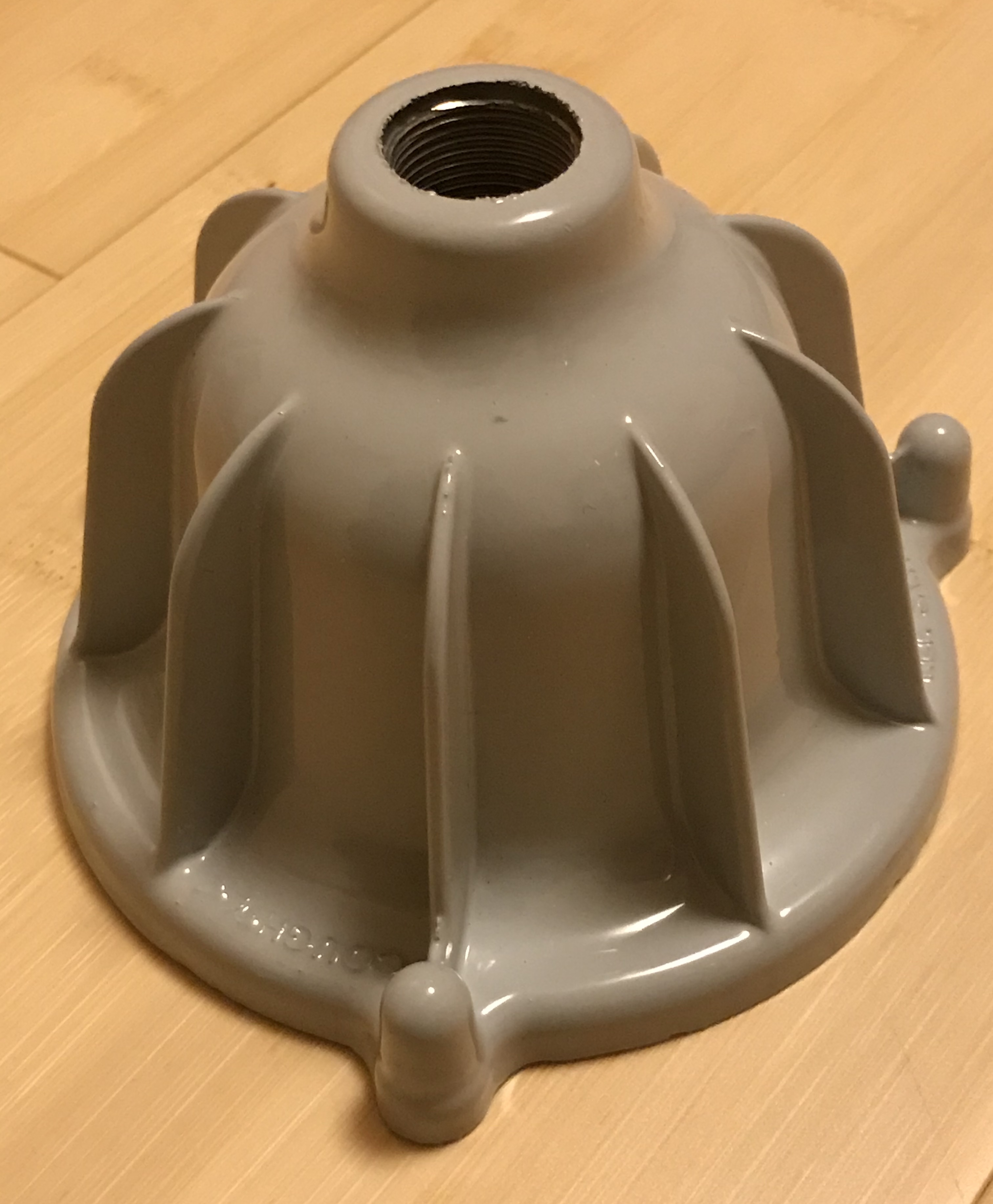 This lamp is still produced and sold today in 2020. The only difference, so far as I can tell, is that the drilled-out hole in the top changed at some point from a 3/4" hole (about 19mm) to a 20mm hole. The writing on the base may also have changed - current products read "COUGHTRIE GLASGOW REF S.W.10". Old lamps, frequently taken off demolished council buildings and whatnot, make their way to auction sites where they tend to command surprisingly high prices, considering the rough state they're often in. Regardless - these things are easy to find, and new and new old stock lamps are readily available in the UK. Sometimes you see people selling paint-stripped and polished-up lamps as kinda dieselpunky pendant lights for installing in pubs in Shoreditch, etc. I'm going to put one in my home office, in fact. Fun!

But this would all be of academic interest if it weren't for the fact that the base of this lamp found its way onto the Star Wars sets of 1976 at EMI Elstree.

The Falcon's corridors contain groups of wall sconces, and Coughtrie lamp bases were used as part of those lamps. The original Star Wars set had square gridded panels, backlit pale green, and a protruding Coughtrie base. It sort of doesn't make any sense, as the base doesn't produce any light and just sticks out, ready to bang someone in the head if the ship lurches. But it does look kind of cool. 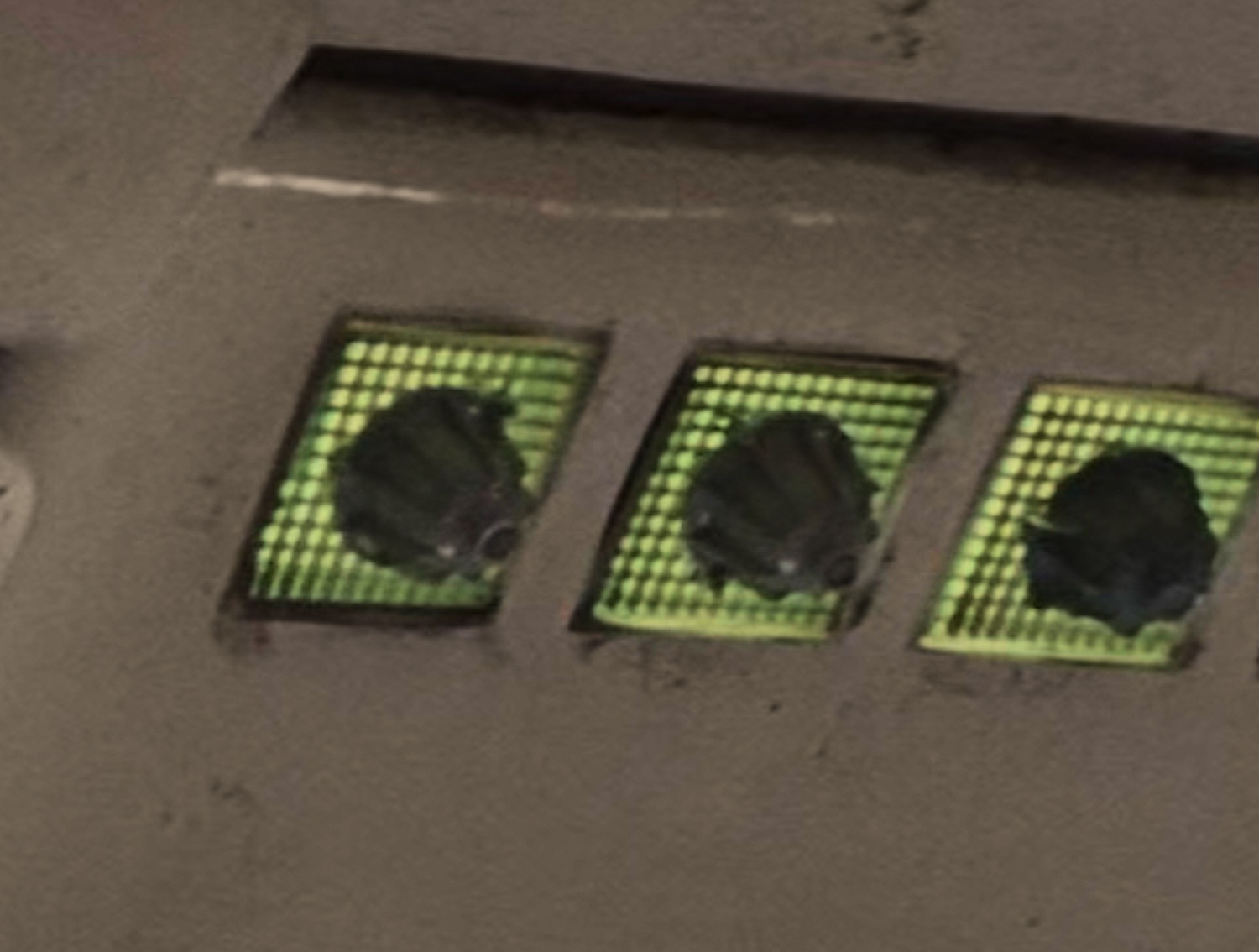 For the Empire Strikes Back the corridors were rebuilt. Coughtrie bases were used again, but this time circular backlights were used. These make no sense from a story continuity perspective, as the original square holes are larger than the circles. But hey - so it goes. The panels were backlit pale blue. Interestingly the one below seems to be falling off its backlight ring. 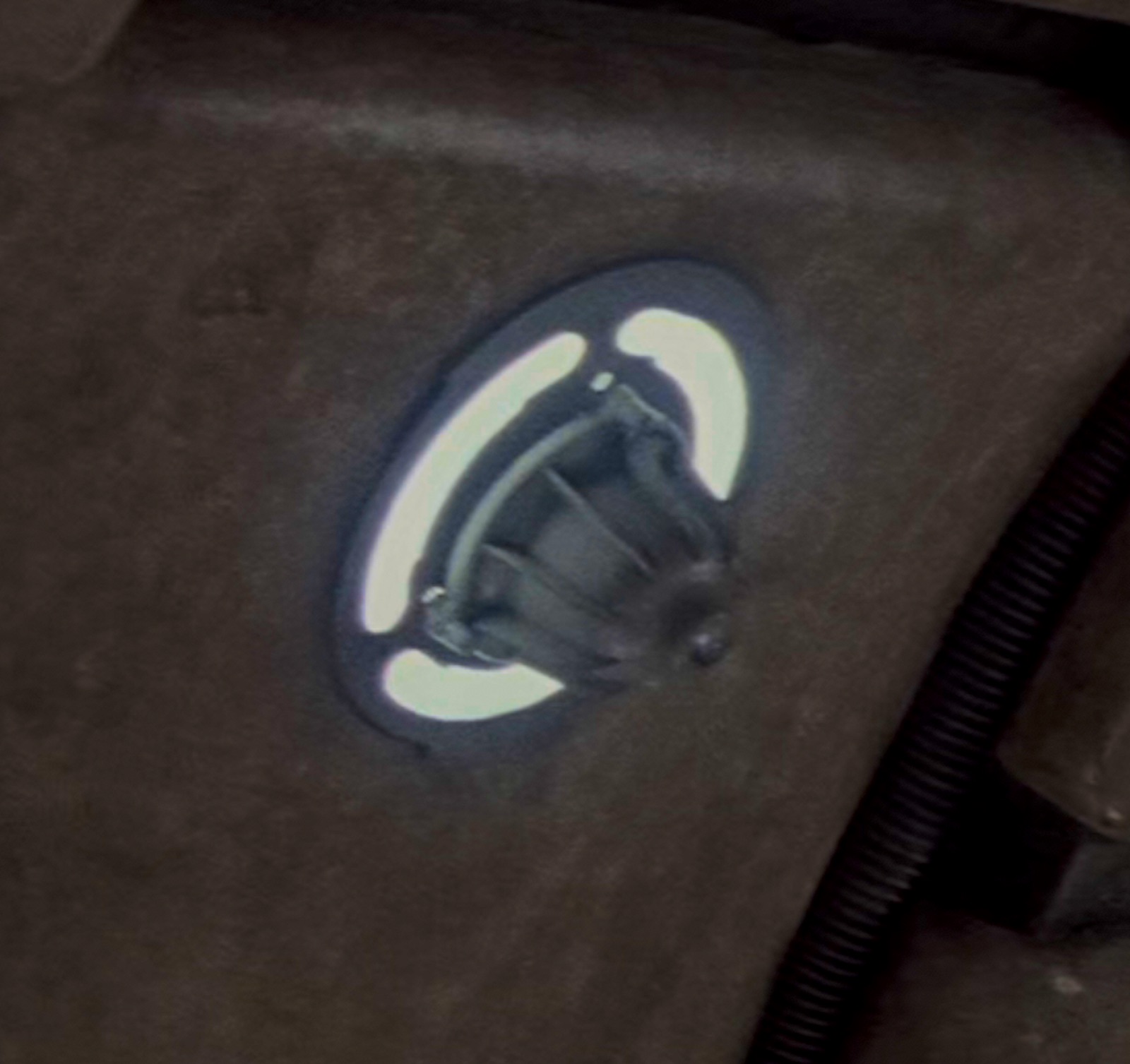 The sequel films reproduce the ESB look of the Falcon, Coughtries and all. But, perhaps as a nod to the original film, the backlights were changed to a green colour.

The Coughtrie bases were all painted dark grey or maybe black. There were a lot of them required, and given British set builders' tendency to make plaster casts, I suspect that they didn't buy tons of old lamps, but made casts for them all. That is conjecture, however, and I have no evidence one way or the other for that.

The rolling cylindrical droid in the sandcrawler, that looks rather like a wood-burning stove complete with chimney, has a single Coughtrie base on the front. 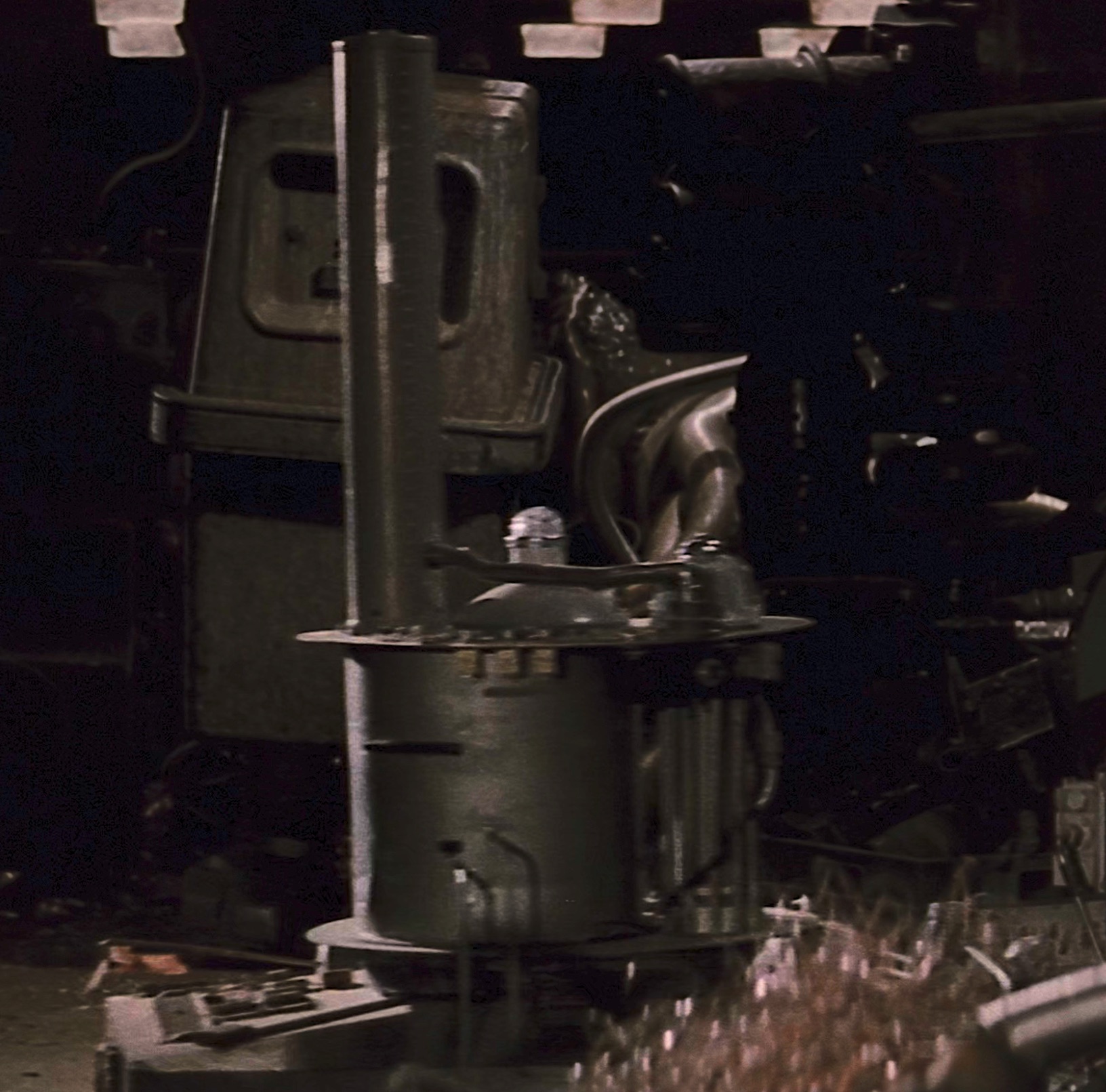 Rows of Coughtrie bases can be seen on the chamfered box thingies that appear at the Lars homestead set in Tunisia.

At least one of the boxes was shipped to Djerba and can be seen in the back of the "these aren't the droids you're looking for" scene. 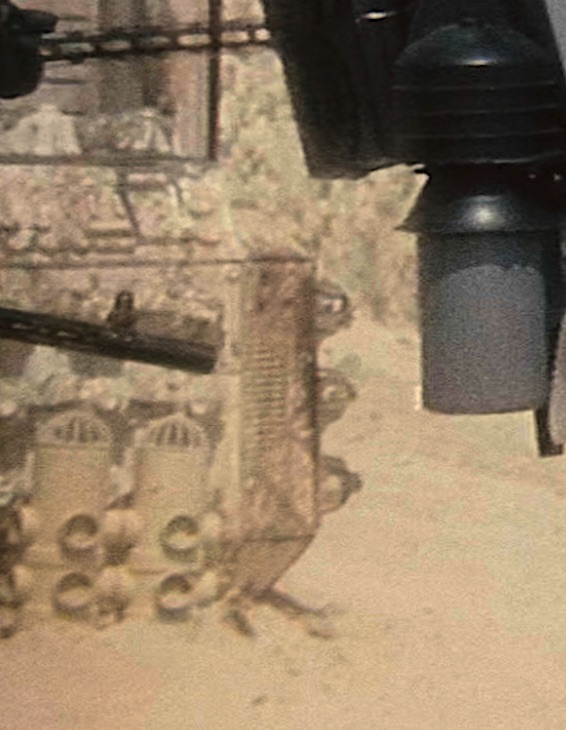 Finally three of these boxes appear in the Elstree-shot scene on the street outside the docking bay. 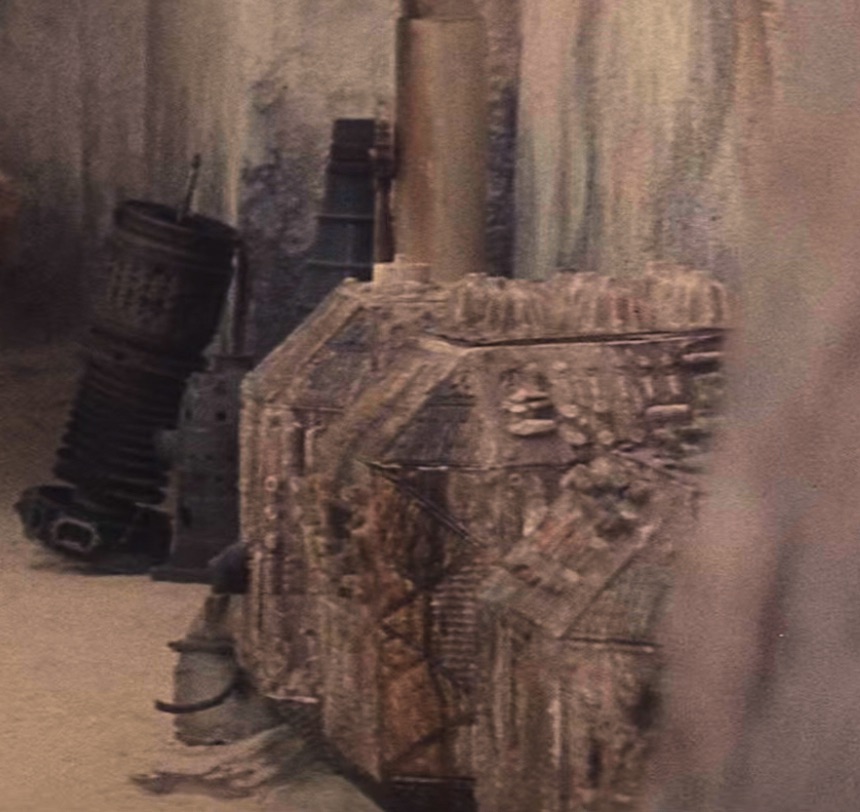 Facebook "Props of Star Wars: the Original Trilogy" member Kevin Brace points out that a pair of Coughtries appears to have been screwed together to make a wall greebly for the cantina set used in Elstree. However, it's barely visible in the finished film - just a detail in the long pan that opens the scene. 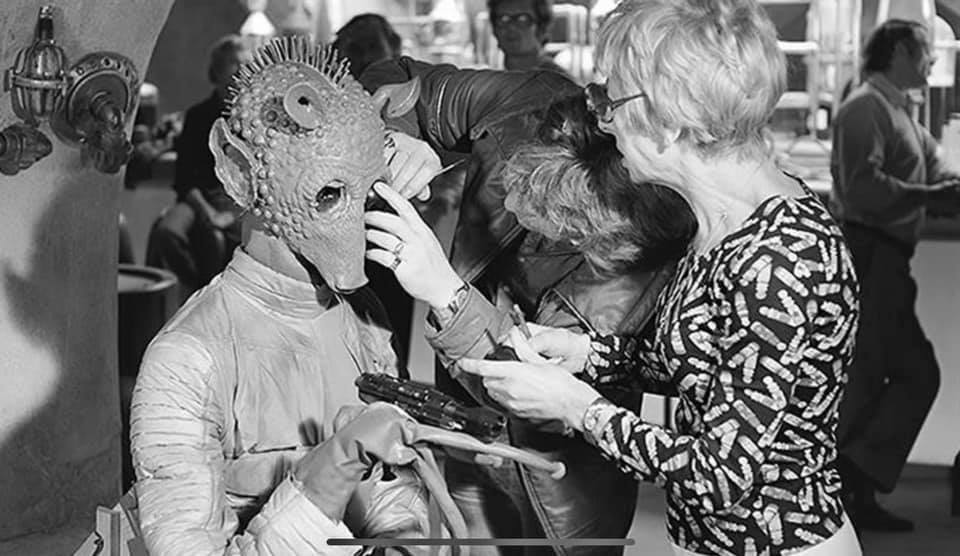 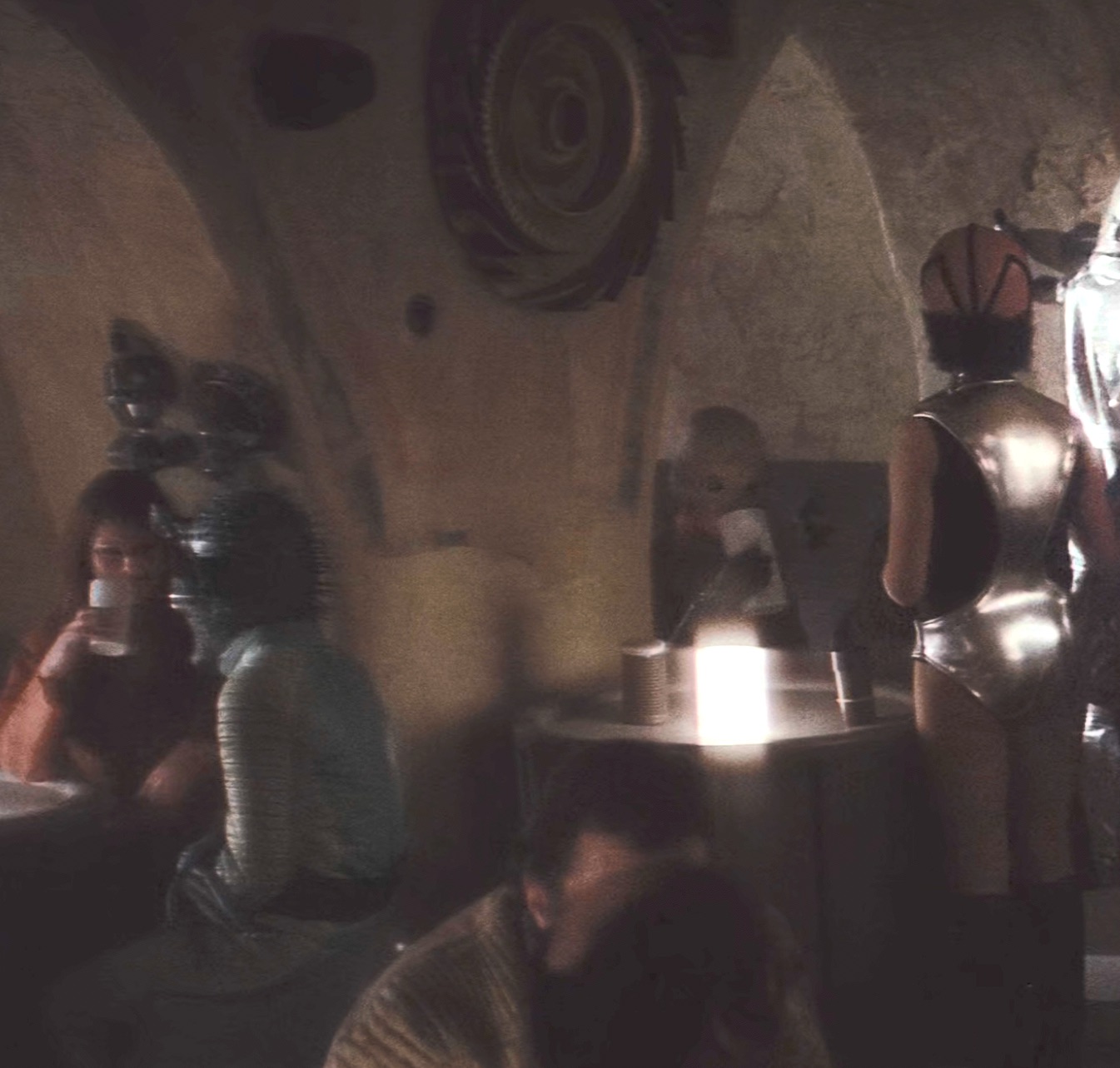 The reason you can't see the Coughtrie lamps behind Greedo in his showdown with Han Solo is because the seated Greedo takes (featuring Canadian Maria De Aragon) were all filmed in Los Angeles as pickup shots in 1977. Relatively little of the original English-filmed Greedo footage (featuring Briton Paul Blake) from 1976 was used in the final film. They thus didn't use the same set for the two Greedos, and there is a minor continuity error accordingly.

A Coughtrie base seems to be installed in a round thing behind R2-D2 aboard Luke's X-wing. 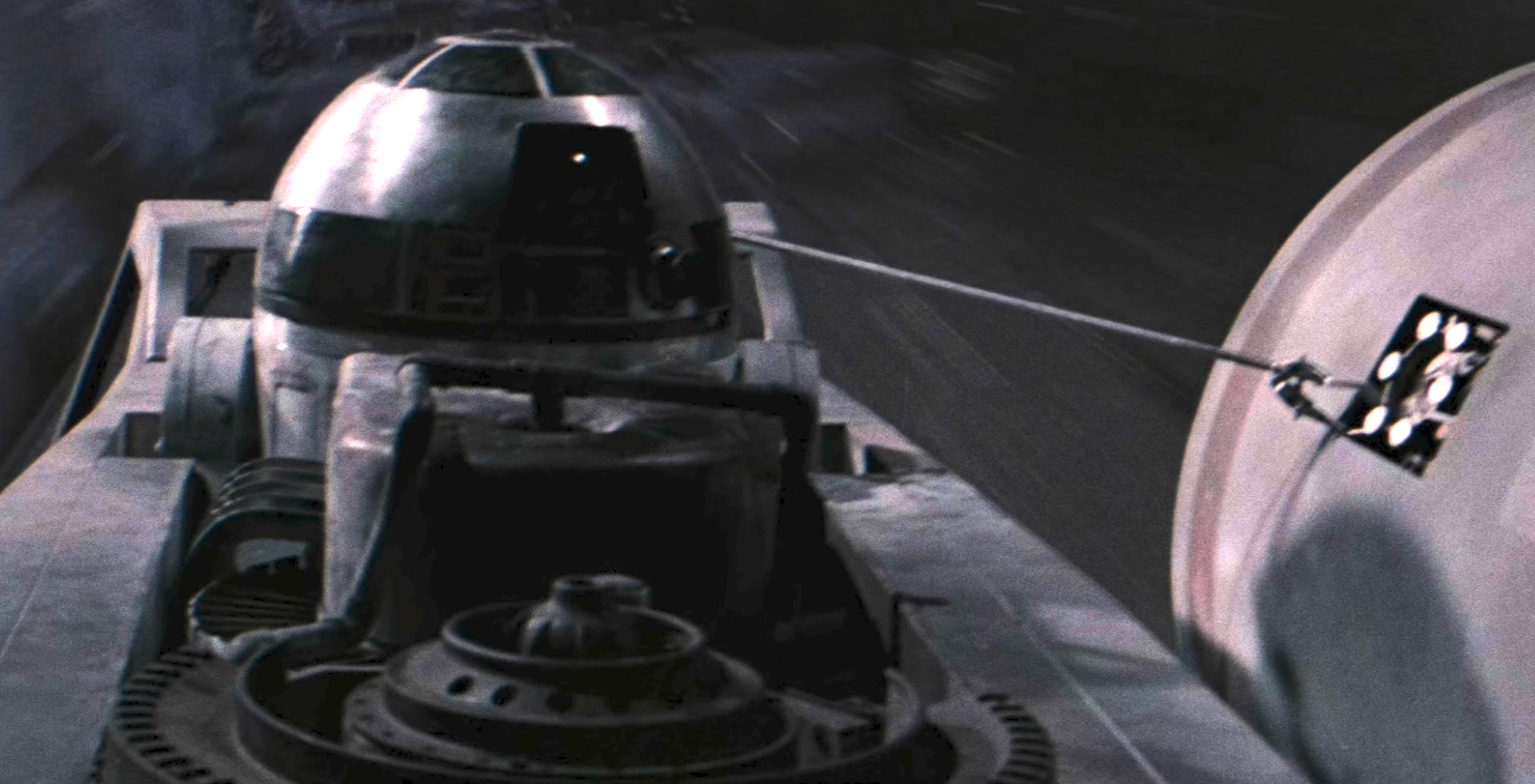 The moisture vaporator props had lamps on the top of the lower four posts. These resemble the glass domes used in Coughtrie lamps, though the ones below are painted white. However, the flange or lip looks a bit thicker to me than the should be for Coughtries, and they also seem a tiny bit too long and/or narrow. So I'd say they might be some Coughtrie variant, or perhaps some other company's glass dome/wellglass. 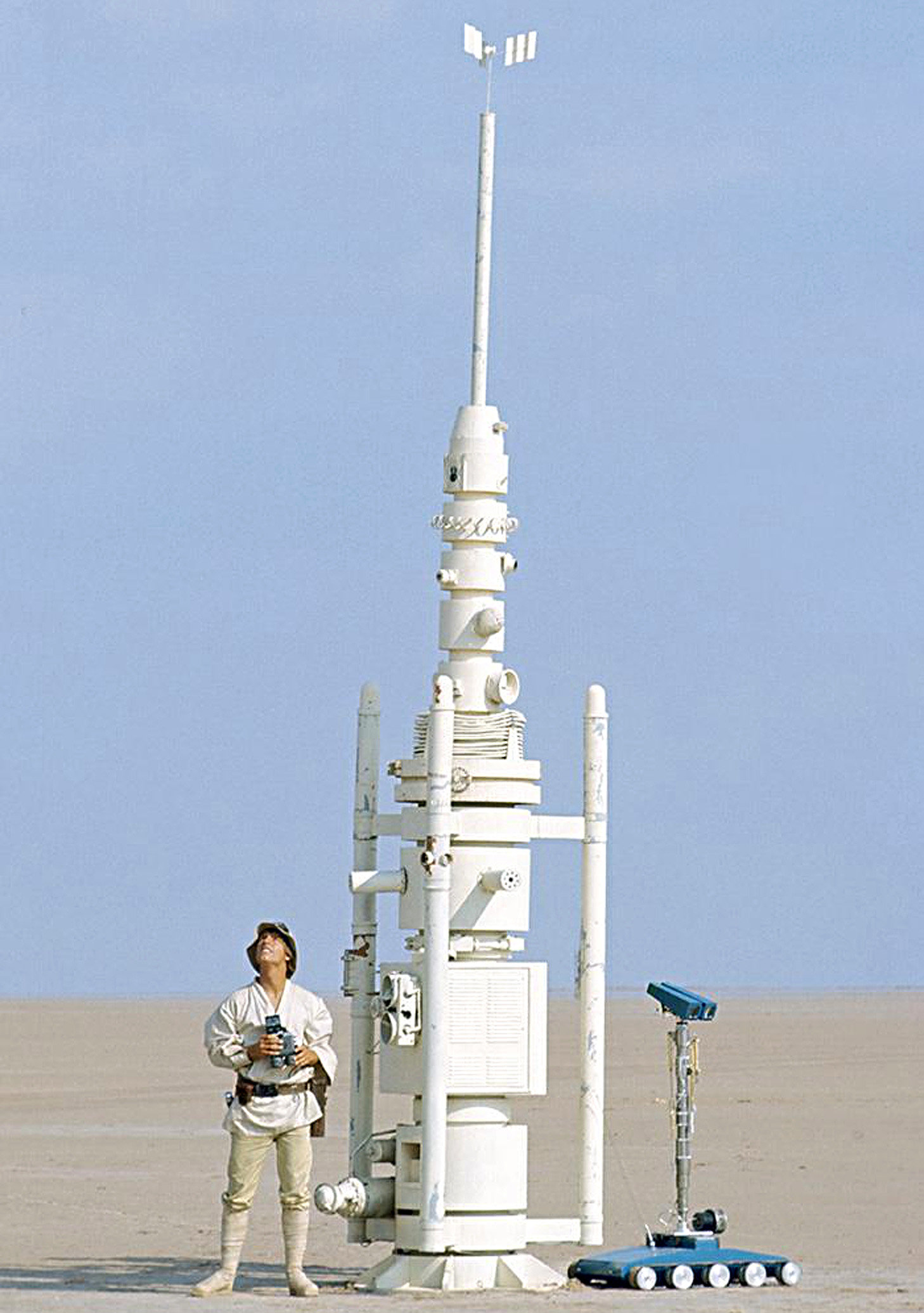 So it's hard to say. Perhaps the docking bay wall lights were Coughtries; perhaps they were taken off Hella emergency beacons, like the two red ones on the blue box underneath the Falcon. 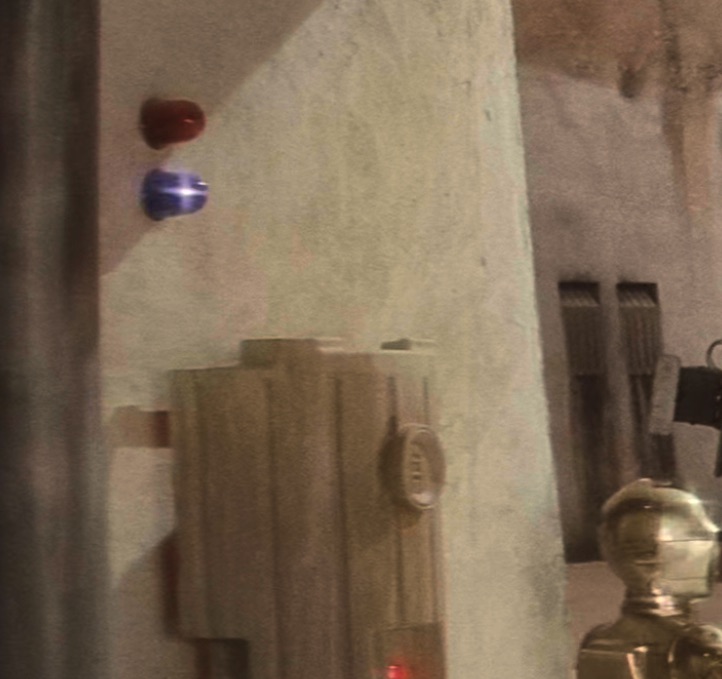 So, there we go. Obscure lamp base trivia!

Anyone else know of any other appearances of this greebly in the films?
Last edited: Nov 3, 2020

RPF PREMIUM MEMBER
Previous RPF threads which have referred to the Coughtrie lamp base:

I have a vintage Coughtrie of Glasgow SW10 lamp base and I plan on designing in Illustrator and laser cutting the wall mount surround and plexiglass elements (ESB version) for it. Does anyone have any idea as to what the dimensions should be for that laser cut surround?

I’ve made a frame for my millennium falcon light. I think it’s pretty cool displaying it that way. :-) Here the one in the movie:

I needed some new lights for my wall so I am printing them. Going to insert 3w leds in each to illuminate them. Quarte sitting on top for scale.

Which size of lamp part is the correct one?

Which size of lamp part is the correct one?

Got hold of the industrial light today, thought I would try and turn it in to a working ESB Falcon light - some time soon. Please excuse the Atari-like 8bit photo, it took me virtually minutes to learn how to take this authentic 70's looking picture... with my watch, lol. Here's a rough...

Today, as part of the heritage portfolio, applications for the SW range from outside coastal homes to inside trendy restaurants.

RPF PREMIUM MEMBER
I bought a case of these and they’re on the way. I‘ll laser cut aluminum bases and frosted acrylic and offer them with battery operated LED puck witch RF remote.
Last edited: Nov 24, 2020

TatooineMachine said:
I bought a case of these and they’re on the way. I‘ll leader cut aluminum bases and frosted acrylic and offer them with battery operated LED puck witch RF remote.
Click to expand...

I have 5 SW10 housings sitting at my desktop, but already sourced the aluminum and frosted acrylic rings.
Curious, what you come up with reg. the lighting assembly!? I was planning to add 5 dimmable LED pugs, but haven´t found anything suitable yet

Great thread idea nkg. Coughtrie lighting deserves some attention as they may well be the most seen/used set dressing/prop in UK based television and film. Of course this is mostly due to the filming studios having them as outdoor/indoor security lights so it could be said that it's just part of the general 1960s and 70s filming landscape - but quite often in several old TV series a Coughtrie lamp is re-positioned for effect or placed in mock-up stage sets for re-shoots and pick-ups. So would that make them as much a prop as anything else, I think so, lol.

I'm sure I've read somewhere that the Falcon's corridor SW10 units did have a function. I have no idea where I saw this but I like the idea - the SW10s are sensors for detecting movement and heat, such as stowaways onboard and random blaster fire. Just like a security light should, mine would have lasers attached - natch!
Last edited: Nov 2, 2020

A couple of other places, and I think the glass is used on the vaperators. There's one or two being used inside-out.

Wavey said:
Great thread idea nkg. Coughtrie lighting deserves some attention as they may well be the most seen/used set dressing/prop in UK based television and film. Of course this is mostly due to the filming studios having them as outdoor/indoor security lights so it could be said that it's just part of the general 1960s and 70s filming landscape - but quite often in several old TV series a Coughtrie lamp is re-positioned for effect or placed in mock-up stage sets for re-shoots and pick-ups. So would that make them as much a prop as anything else, I think so, lol.
Click to expand...

Indeed - a classic 70s look, isn't it? Some TV detective show maybe, set on a gritty industrial estate... the protagonist gets out of his Rover SD1, rounds the corner of a pebbled concrete building, and there's a corner-mounted SW10 right there! I can see the blurry PAL scan lines...

Nice write-up. What do these tend to go for?

RPF PREMIUM MEMBER
Varies I have a set of 4 for sale with the laser cut plates.

I paid between £35-60 for correct vintage ones depending on condition and correct diameter.

What a great resource! Has anyone been able to source the original square, gridded, pale-green surrounds from ANH? Any help would be much appreciated.