CONAN The Barbarian, my COLLECTION

Hello everybody
So proud to show you my screen used costume from the movie Conan the barbarian (collar not include) , got the certificate from propstore

Only the collar is a replica cast from a screen used.

Living in Spain now, i will make photo to the set with this costume as soon as possible!! Mountain of doom set is located in the south of the country where they shoted quasi all the scene and other famous movie as the dollars trilogy and some scene of Indiana Jones and the ultimate crusade. :cool

someone was making them on eBay but i haven't seen it in a while. I know because a friend of mine was looking for one as well. Great piece of conan wardrobe. You don't see too much coming from that movie.

Hello , new adds in the collection

I no longer live in Spain, I came back to France but the project to move to the Mountain of power is still alive .

Sorry for the poor pictures, that was just a quick unboxing with camera i will make better pictures at the end of the month.

Next originals aquisitions: spears used for the battle / men priest costume (a little different from the woman)

Congrats. Great additions. I just saw one of those snake emblems for sale (at a high price I gather).

Amazing!...that is my favorite movie.

As i said pictures of the costume.
I used a navy white pant and random boot, i have to craft ones more screen accurated lol

A new one: hood from a fidel of Seth costume

I've got the sword and the two gems (the one from Barbarian and the Hart of Ahriman from Destroyer), but I've got room to hang his headband near the sword (with another hat hanging on the other side of the tapestry hanger as I have these plans to do a symmetrical room display in that regard but the sword means a headband would fit, but not a hat on that side. Conan's headband would be perfect.

Unfortunately, I cannot find a very accurate one. There's one that's reasonably close on eBay right now, but has the wrong number of rivets or whatever those bits are on the part in the middle (4 in stead of 5 up/down and only two across instead of four, but it seems to get the rest of the band mostly correct unlike the one on the Viking store that's not remotely like it. Did anyone ever make a more accurate head band? They're fairly pricey ($60-80) for being inaccurate. I'd probably go over $100 for one that matched the movies more closely.

the most difficult for the headband is find the correct leather décorations.
As for the "Search Armor", that is the most diffucult part for me, pyramidal diamond déco for leather with the correct dimensions . I have 3D print some of them as prototype and i will ask somone to making them in steel.

Storm - If you don't already have the Heart of Ahriman (or RM's recreation), I believe I've found the original basis (Tiffany Diamond Paperweight circa 1982). They show up on eBay, although you might have to wait for a flawless one at the right size (they came in different sizes). But it looks and behaves IMO identical to the movie one (where the light comes out varies a bit where you place it on the stand).

EDIT: Nevermind, I looked back and see your already saw my posting elsewhere on it (here: Conan The Destroyer - Heart of Ahriman Jewel Display)

I do wonder if polishing down the Waterford crystal from Conan The Barbarian might look a bit more like the movie if some of those cloverleafs were largely removed. The movie looks like they just left the outlines.
Last edited: Feb 10, 2020

The original one sell on propstore:
"This clear acrylic large-scale diamond has a pointed top and a flat bottom for display. It exhibits some discolouration, as well as minor tape marks on the bottom and some small bubbles throughout the interior. Dimensions: 9.75 cm x 7.5 cm x 7.5 cm (3 3/4" x 3" x 3")"

I think the diamond was cast in resin crystal, it is an explication for the bubble. And on it we can't see any mark laser tiffany brand as those sold in this era.

I'll consider mine superior, then. It's glass or crystal yet behaves the same way and just happens to look identical? Hell of a coincidence, IMO given the paperweight crystal used in Barbarian.

I do believe there are some very tiny bubbles in the Tiffany Paperweight, as well, though it's definitely not resin as far as I can tell.

Storm - Do you have a link to the item on the Props Store site? I was unable to locate it. Or was that from some point in the past when it was sold?

We can't found it directly because that was sold during an auction (09/2019) and not a classic sell on the website.
Here the link you can see all conan props sold during this aunction, the diamond is at the bottom of the page

Somehow, the edges look rounded on the facets compared to the movie shots. Maybe it's just the lighting? Or could they have had a stunt prop version?

Destroyer was way better than Barbarian. Hotter women. Actual quest. Some light comedy elements. I just wish they had made more back then (or even one now with an older Conan and his kingdom).

yes they look rounded. For sure they had not only one prop and maybe a stunt version.

Moreover Conan quest to take vengence for the murder of his family and people is more important than pick up some items to a queen that at the final do nothing ^^
Fleisher has made an infantil/all public movie compare to the one of John Milius. When we read the scenario it is maybe more accurate to Howard novels/world but at the final the movie is kitch, no violent , some humor ridcul and not darker as the one was.

Olivia was 14, but I was 10 at the time. so excuse me for remembering her that way (pretty not sexy). I like to think of her from the movie Greedy (as in became hot). She was still pretty either way. Her cousin in The Living Daylights with my favorite Bond (Dalton) was also beautiful. I wasn't attracted to Grace, but I found her character entertaining. Sarah Douglas was hot, though from Superman II. "Oh Superman! "

Sandhal wasn't even remotely attractive, IMO and thus hard to conceive Conan's obsession over her when he knew her for a very short time.

Yeah, I get the traditional critics reasons they liked Barbarian and hated Destroyer, but I believe in critic reviews about as much as I do weather forecasters. Yes, it's more serious and more personal. The fact remains I've watched Barbarian a dozen times, but I've seen Destroyer hundreds of times and never get sick of it. Barbarian reminds me of a movie. Destroyer reminds me of playing D&D. Even the ping sounds the guy guarding the horn makes with his bracers had an impact. Conan doesn't fight a mere man that killed his father for revenge; he fights a god to save an innocent and wins!

I only wish I had got into collecting prop replicas when The Horn of Dagoth was available. Now I'll probably never see one or it will be astronomically priced. Destroyer had more interesting artifacts. I'd like to get those finger guards Toth was wearing too.

Storm said:
We can't found it directly because that was sold during an auction (09/2019) and not a classic sell on the website.
Here the link you can see all conan props sold during this aunction, the diamond is at the bottom of the page

Now that I'm home, I have image access to my photos and the movie to take snapshots from to do a little comparison. I don't know if a resin diamond would sparkle and refract light like it does in the movie either? At the same facet locations as a glass or crystal version?

Movie (left) Vs. Tiffany Diamond Paperweight (right or down depending on how much screen space you have) I have lit similarly (both seem to have hard facet edges, which is why I find those smoothed edges puzzling). The angles and lighting aren't an exact match or even the rotation relative to the facets, but they certainly look very similar to my eyes. So if they didn't use a Tiffany paperweight, they sure used a similar made prop with the same facet cuts that seem to light up very similar from below. It does seem like the dimensions might be off a bit, but then they did come in different sizes. I went with the largest one I could find in mint condition. 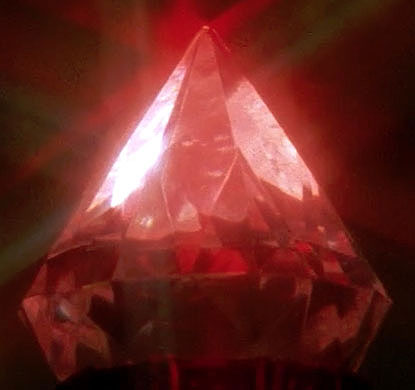 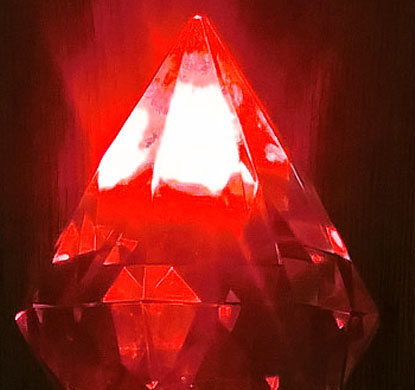 Movie Extreme Closeup shows sharp facets (of course there's a movie overlay effect to it, but I assume they still used the gem for the foreground effect): 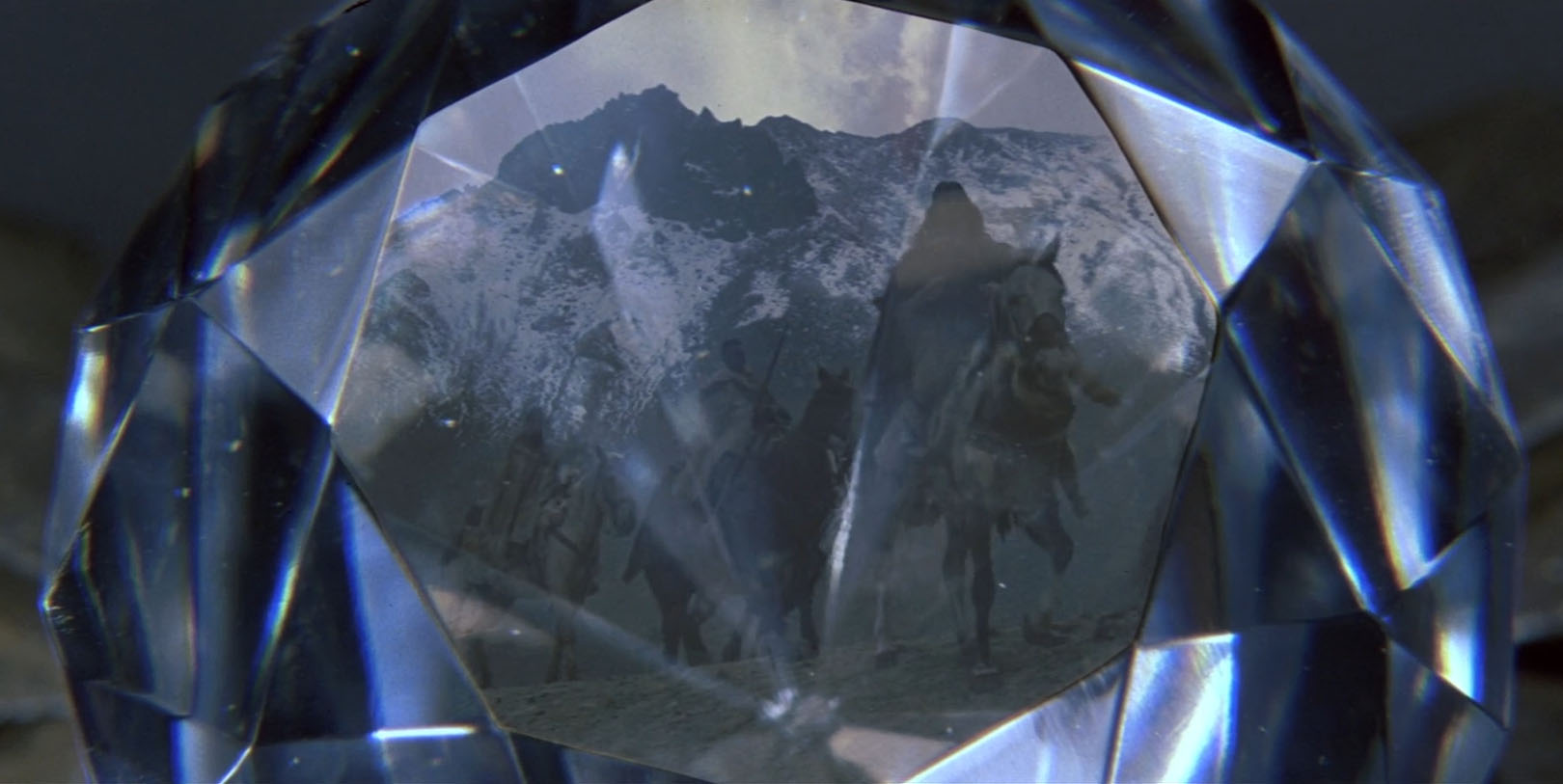 Close up with Castle holder (edges don't look softened to my eyes; I'll ignore the color mismatch with the yellow look from quoted post): 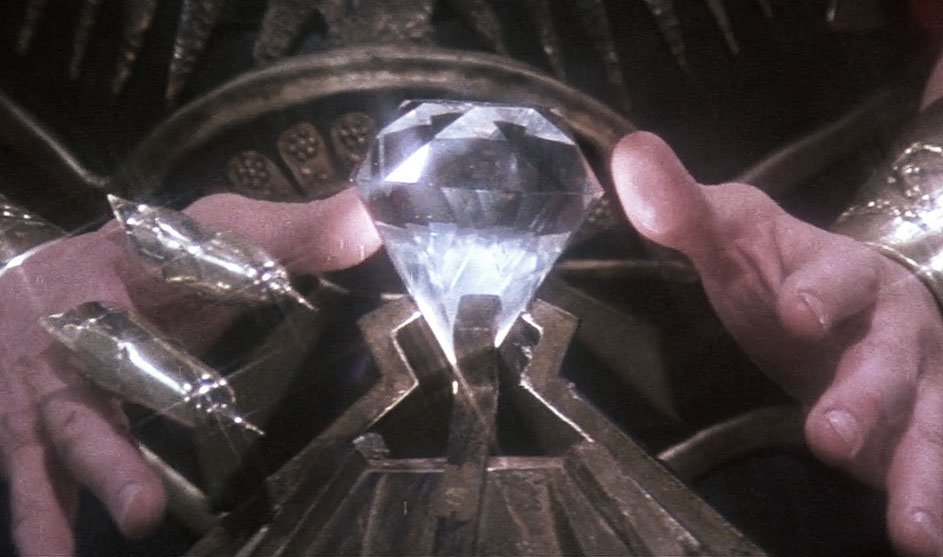 Compare angled-righted crop of above (left) to Tiffany LED bottom lit (rotated upside down to match holder on left with a bit of "blue" removed from the cooler LED light to closer match the lighting from the movie; of course they're not lit the same once again and the left one is rotated to the right by the looks of it a degree or two more than where I happened to set the paperweight, but the facet reflections aren't miles off either): 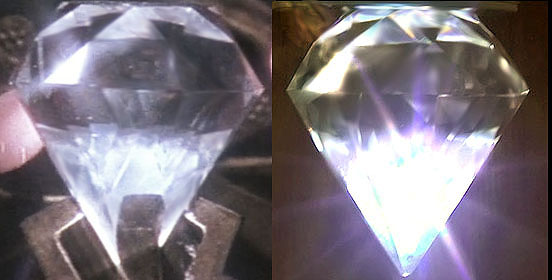 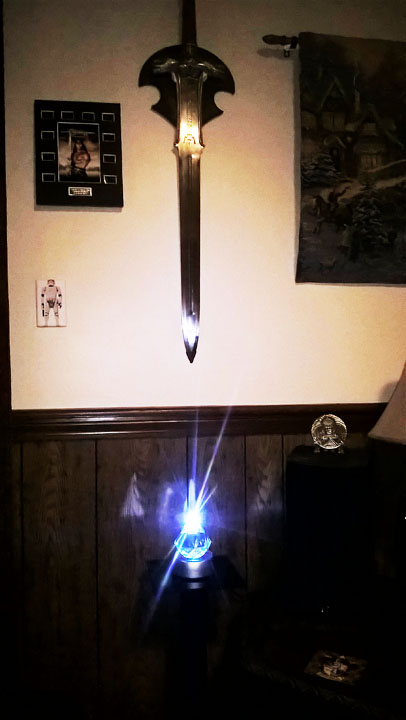 Again, I can't say what they used in the movie, but they didn't at least model it after the Tiffany paperweight, it's a hell of a nice stand-in prop and I got mine for a pretty reasonable price on eBay ($31 + shipping! The prices for these are all over the place, though. I got luck with that auction, but then people aren't typically looking at these as movie props, but rather as bric-a-brac. Throw in the light puck (~$25-30 and it makes a good mockup display. I already had a spare glass speaker stand to set the puck on for now. I'd love to make a pyramid shaped stand at some point if I could do it halfway well and it didn't block the aisle way (it is inside my home theater room).

Wednesday at 5:37 AM
smueqas
S