Hello, I try to take on a big project once a year with my kids. I have been wanting to do a fully 3d printed armor suit for some time, but have had limited success for various reasons. (Printer too small, not enough modeling time, lazy, etc.)

Here is a sneak peek at what we wound up with. 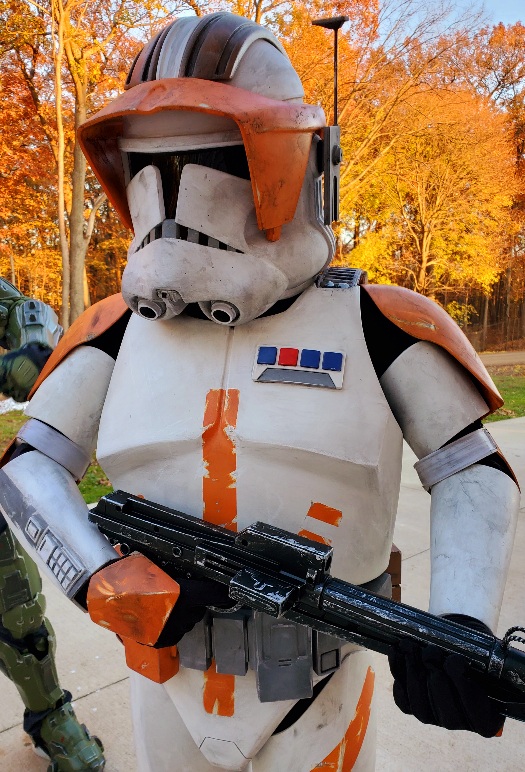 So this year we decided to take one on again. My 9 year old son wanted very badly to be Commander Cody. So to save some time, I bought a 3d modeled "Wearable" set of files from a site on the web. I won't say where, because the files were a disaster and I'm super angry and don't want to speak out of emotion. Let's just say the files were unusable. They looked great on screen, but once evaluated, impossible fit from part to part, way too thick, or way too thin, or bad proportions, etc.

So I wound up modeling almost all of the costume myself anyway. (What a waste of 100 dollars, for the files). And of course no refund. Gah!

So off to Blender I go. My goal was to reuse as many base files as I could and only completely remodel what I had to. I only had 5 weeks total, and if you have done a project like this, you know that's down to the wire already.

This year I decided to buy a big 3d printer... and idex one. I bought a Multoo MT2X. More on that later. I have an Atom 3dp and an Anycubic Predator, so until the Multoo showed up, those two were the ones I used.

The body pieces where HUGE and I had to print them in pieces. It gets cold here, and opening the door a couple of times in the shop really messed up a few prints. And of course all of the failures of 3d prints happen 99.7 percent of the way into the print, so you make sure to waste the maximum amount of time and filament =) So I also bought a 3d print pen, in hopes of gluing the prints together with that, instead of actual glue. (And it worked much better than I could have imagined.) I highly recommend that method. 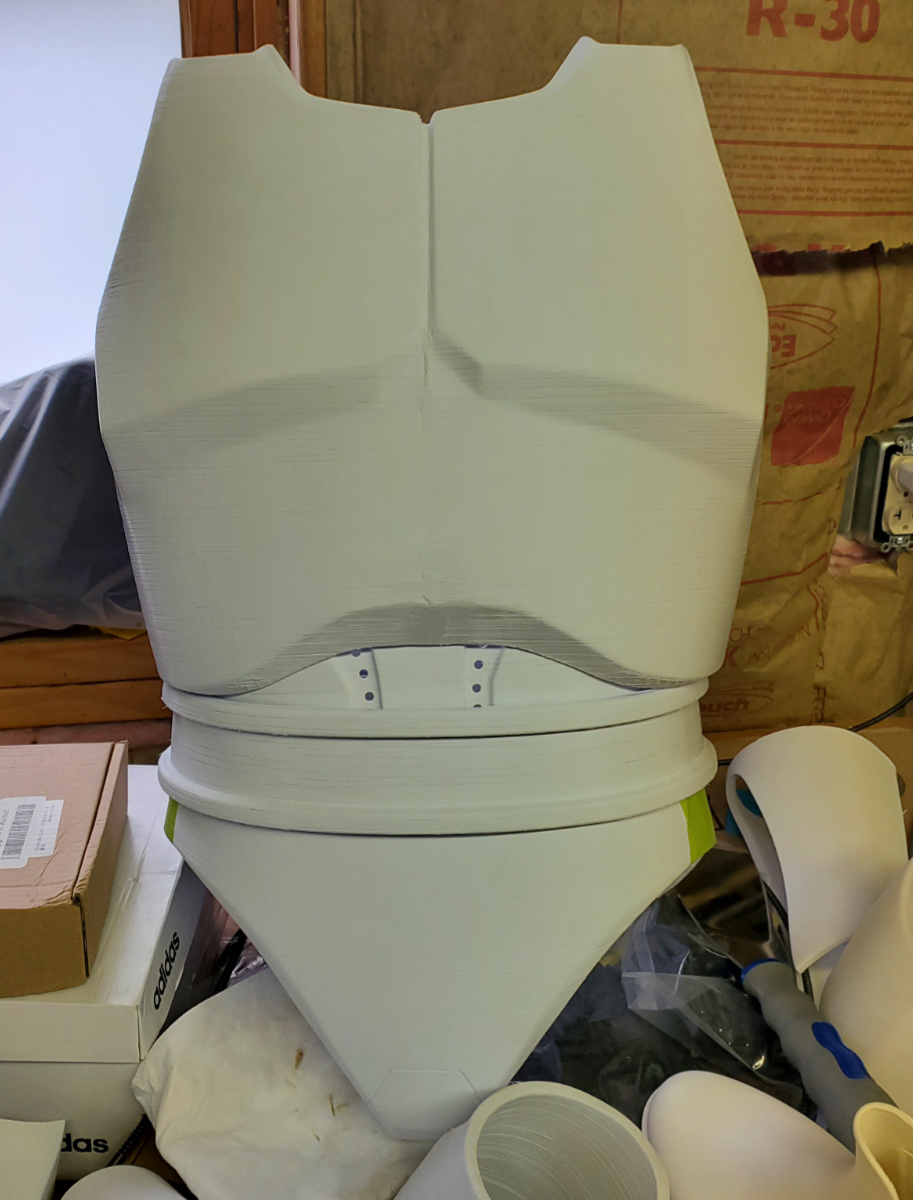 I do 3d design for a living, and most of the time it is a curse. I start seeing the imperfections in something and I want to fix ALL of them, or I can't sleep, but you do the math and realize you have X amount of time left and if you plan on getting done you have to compromise. So that is the point I was at here. 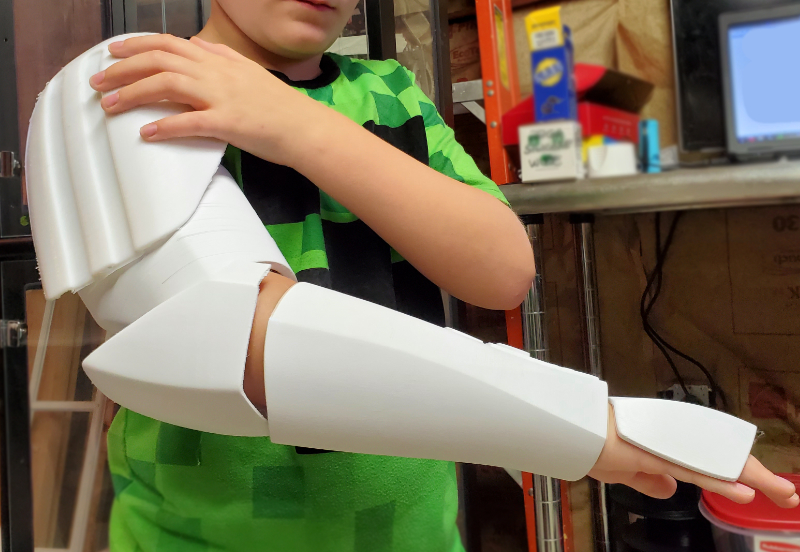 Elbow upside down (oops) hand plate too big, etc. so off I go to reprint again. I realized afterwards, I would have been wise to 3d scan my son, so I could double check sizes before it was in the real world. it just wastes time. arghhh.. maybe next time... so I push on...

I had read how the failure point for a lot of stormtrooper costumes are the shoulder straps. So I started testing methods of making them. (Flexible filament, riveted snaps, etc. ) I decided to go with flexible filament and metal snaps. Which ultimately blew up in my face in the eleventh hour, but you push through as usual.

I was getting down to the wire on print and finishing time. So I started to mask and paint parts. (I love the look of a part when it is all masked up. Am I the only one?) 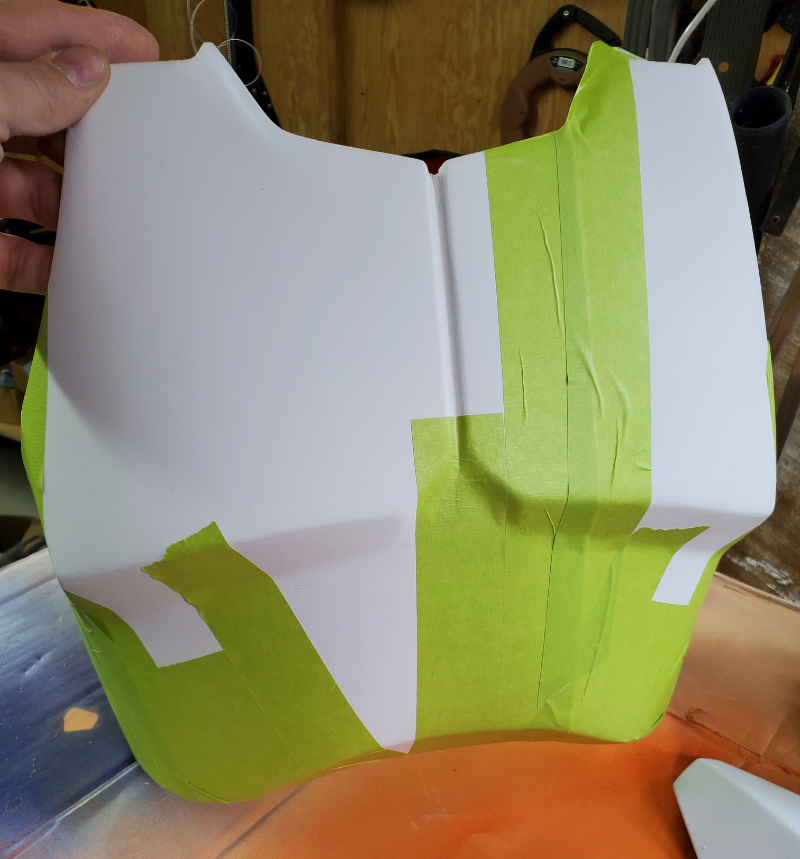 I'm mid mask here, and trying to get stuff done. I was a little concerned about the chip paint effect, and researched/tested many methods. I'm not a fan of a lot of them. I like the hair spray technique, but don't like that layer between the paint and the surface, and luckily due to time shortage, I had to wing it and I still like the results. 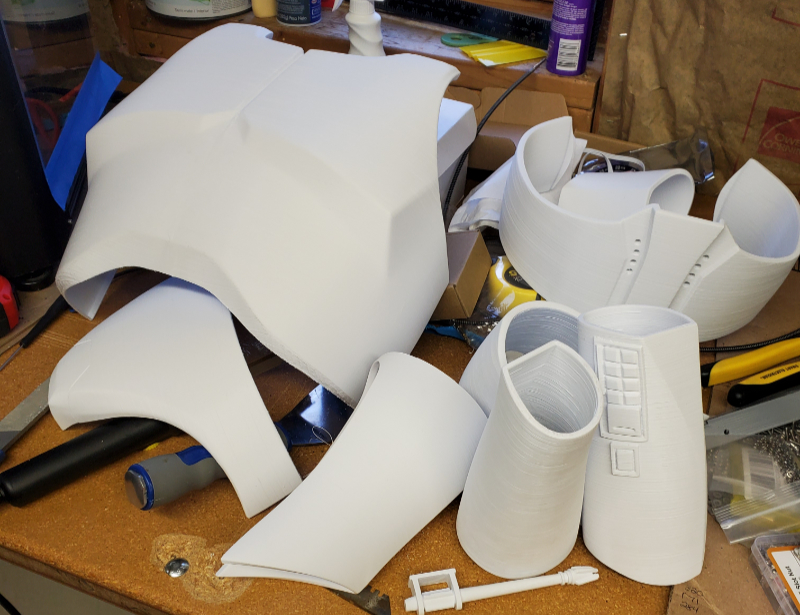 There were a few parts that were extremely hard to get right. The worst being the Shin armor. Of all the things I didn't expect. Just too small and can't get the foot in, get the foot in, but ankle too tight, make a big adjustment, and now it's like a D*** in a shirt sleeve, try again... got it! I wish I had pics of all the issues, but I'm racing to the finish line and not thinking about pictures. So maybe I'll take some post mortem ones if there is interest in seeing more.

We began the test fitting. 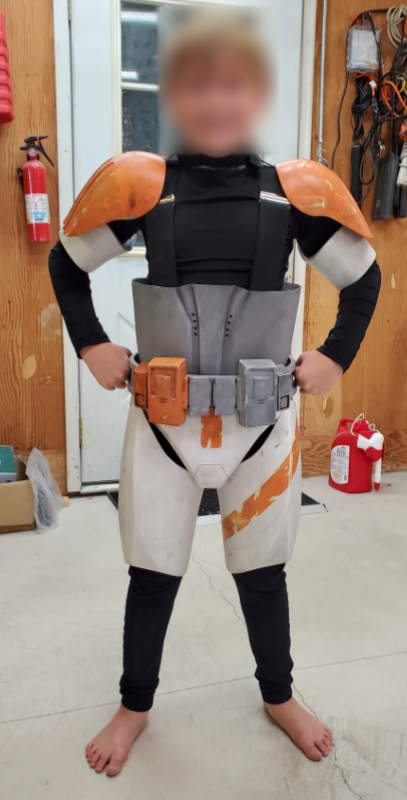 So fun!! Now I want a set of Cody Armor. lol. I forget how fun the weathering staqe is. My wife through it was odd... We spent all this time printing, and sanding and gluing, and getting everything perfect just to mess it all up???? Yes, exactly. That's what we are doing. But what a huge difference... I did a multi layer, mottled color scheme to try and get the most out of the weathering... 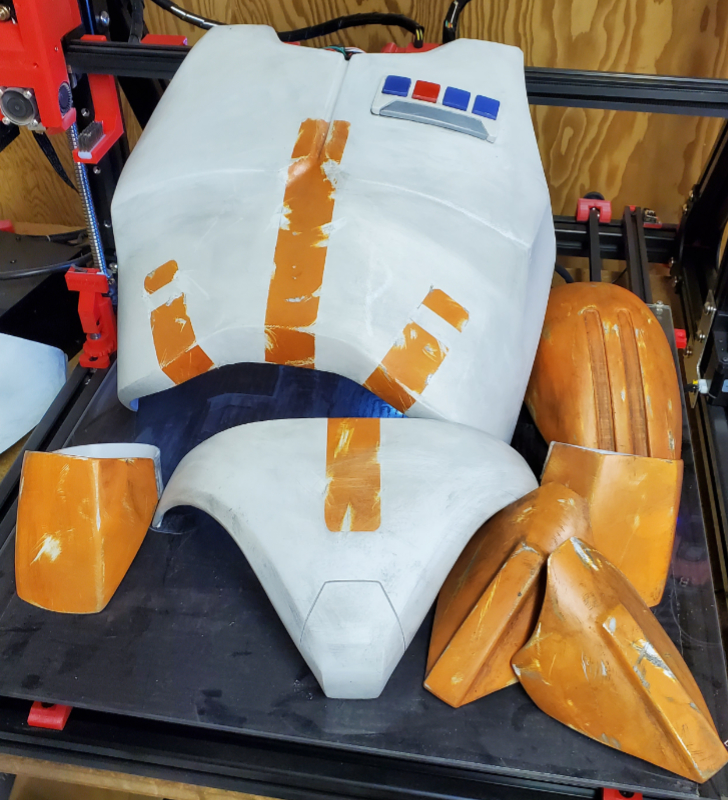 We are into the last 4 days now, and I have made the biggest mistake of the entire build. I left the Helmet for last. I'm out of time, the helmet is the most complicated part by far, and I'm having issues with the prints... So I am doing my best to persevere and not miss the deadline. I almost bailed on the helmet and bought one online, but there was no time for shipping, so it's just make it happen... come on!!

So I realized after printing and fixing files, that I accidentally used the file that was missing the extra Cody details. DUH!!!! too late... Have to move forward. So my wife is always such a trooper. (No pun intended).. she was in the workshop, helping and sanding, and cleaning, and and and... I was modeling and getting frustrated, and coming up with fixes and solutions... I can see light at the end of the tunnel maybe... 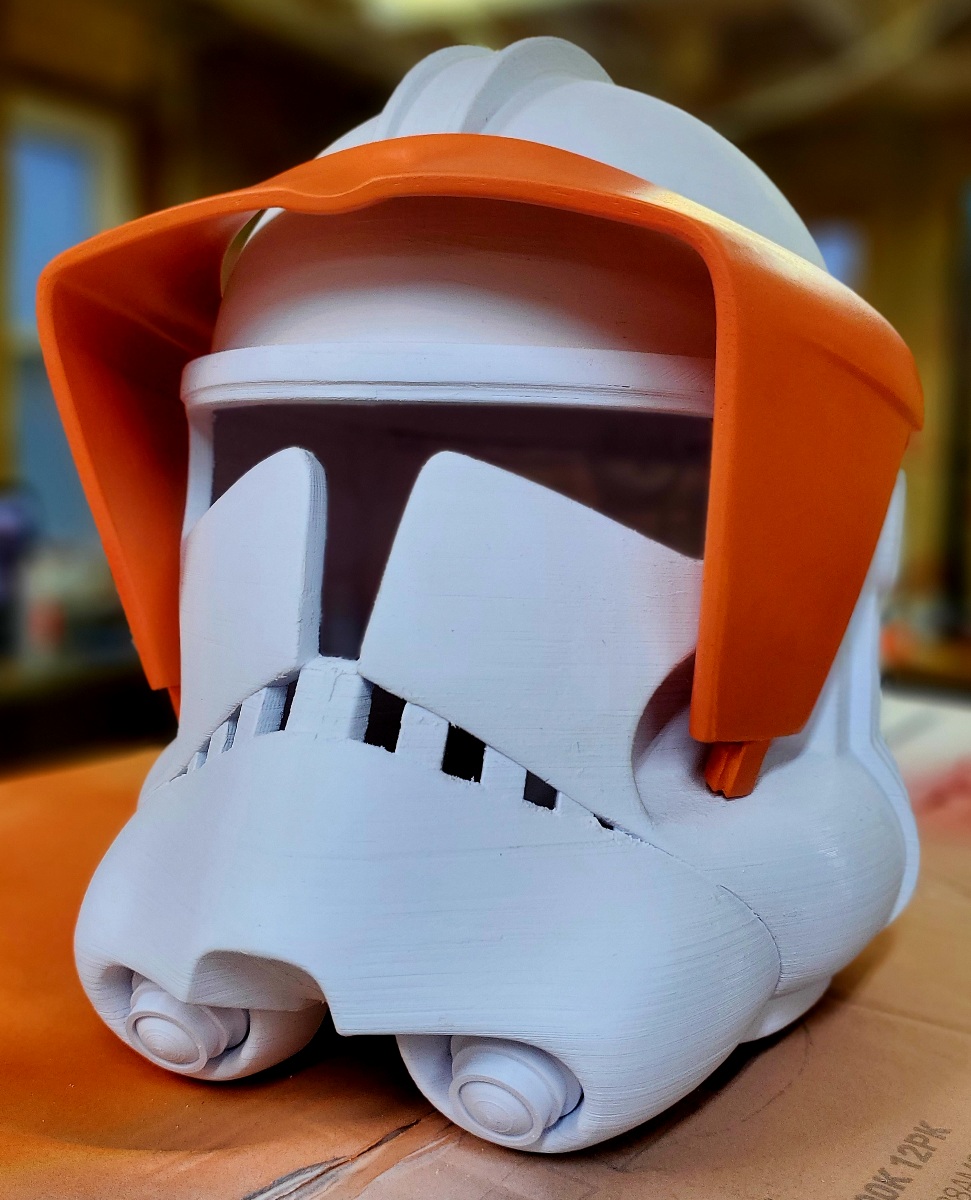 I had to compromise a LOT on the helmet. The sanding was pretty much done, coming up with a way to attach the visor, trying to make sure it was comfortable and had foam padding in areas that could hurt him if he fell. I bought a safety lens for a grinding helmet and cut out a lens for the helmet out of that. I was trying to heat form it into the shape of the helmet with no luck. It was polycarb and took the heat like a champ without warping at all, so here is where the 3d print pen really saved me. I used it to make bosses inside the helmet. Then I drilled them and used screws to hold the lens in place. So now it could be removed and even replaced. Yes! 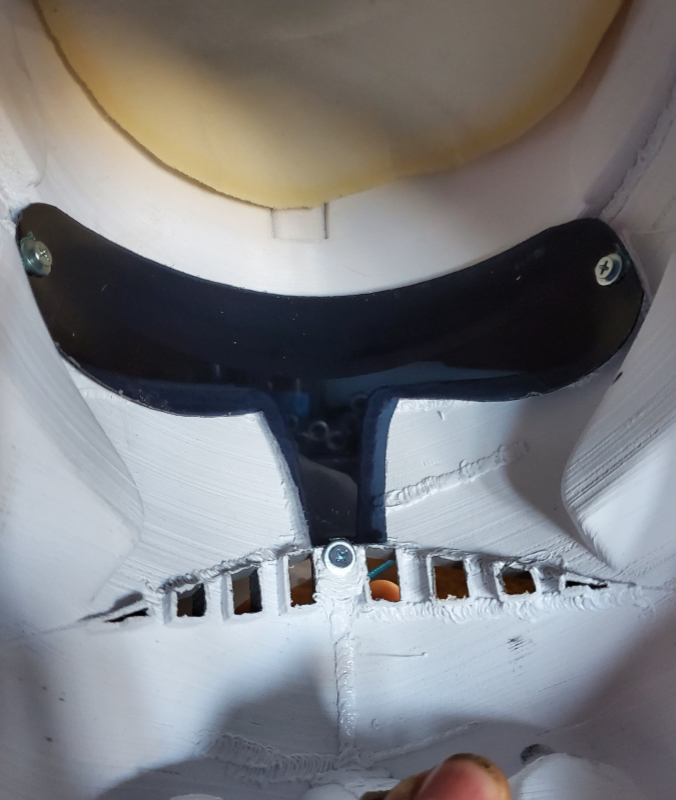 We are really down to it now. It's Halloween day and I have only put down base coat and no details yet. We are in full go-fast mode now. I'm just guessing and painting, and praying, and fitting and testing and just trying to make it to the finish line. We go to put on the suit and realize the boots are not finished!!!! Help!!! So I race to get the boots done using foam and acrylic paint. Not the worst.. My wife decided to try on the helmet... Looks cool, even if after I realized so much was wrong... (Just get it done!!). 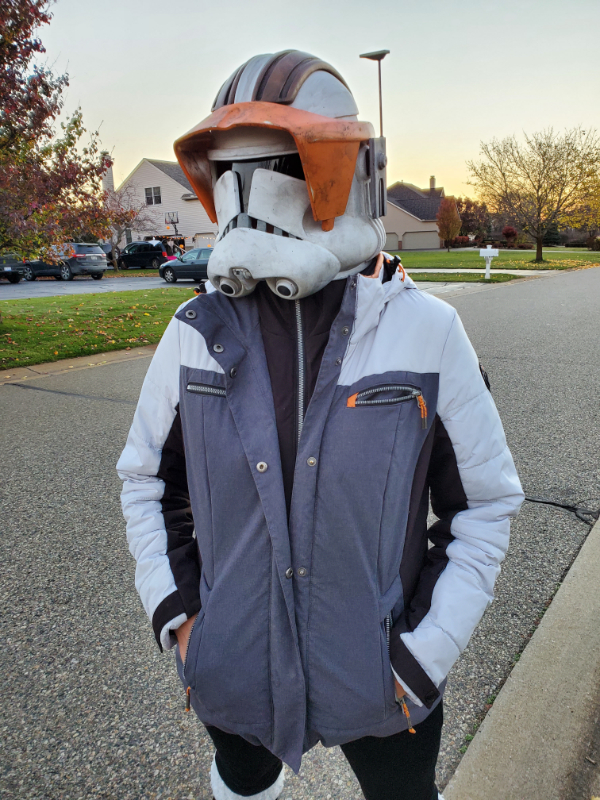 For some reason, that picture cracks me up... So we are in the eleventeenth hour and we find we cannot snap the snaps on the shoulders. Too tight. So we make one final adjustment, rivot on the snaps, instead of doing captive inserts in the 3d print and Viola!! We are done... (Throw that in finger quotes). We just made it in time. As in it was getting dark and trick or treat was about to start. So we got time for a few pics.. 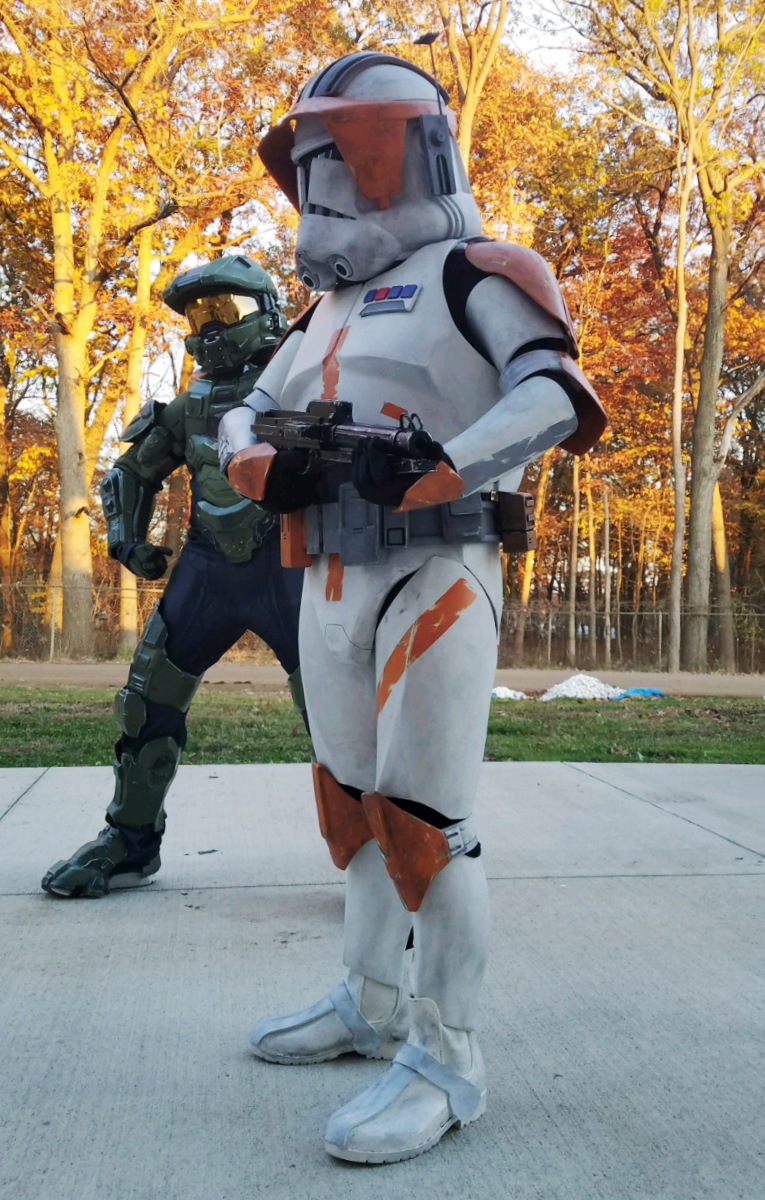 My other son was Master Chief, but we bought that suit. So no write up on that one.. So fun to be a dad. I'm hoping my boys learned something and look back on these times later in life with a smile. 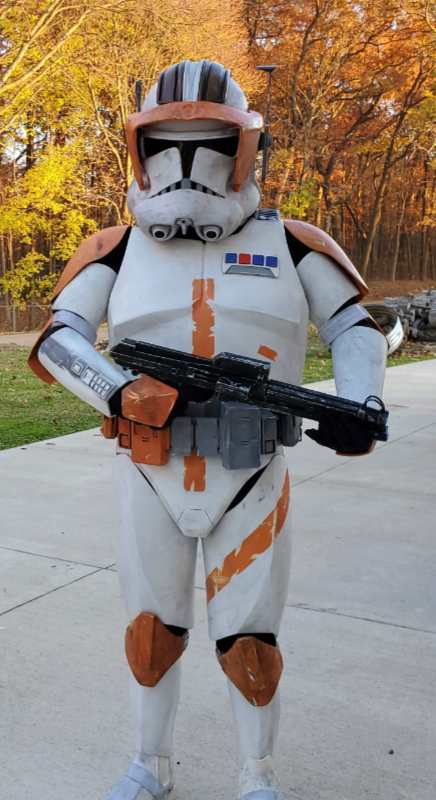 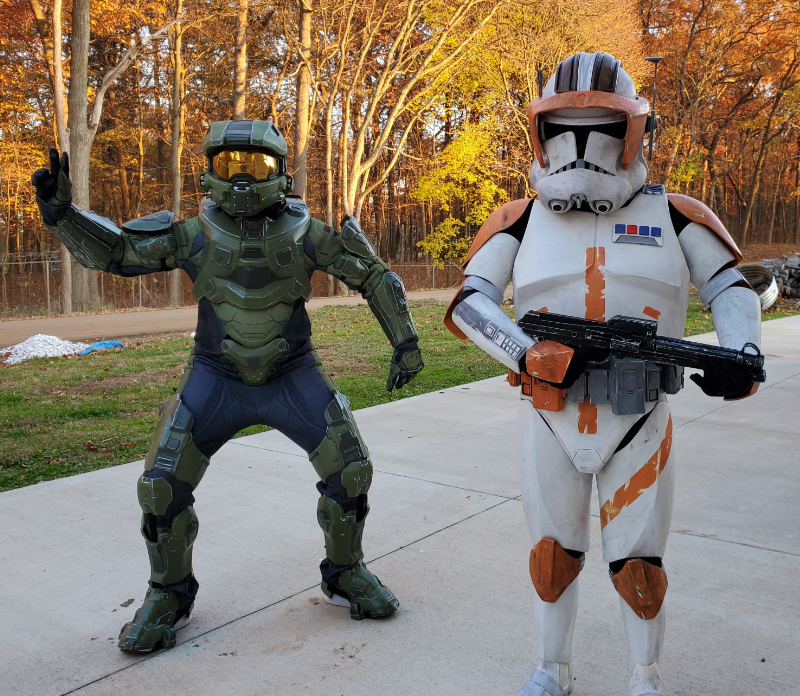 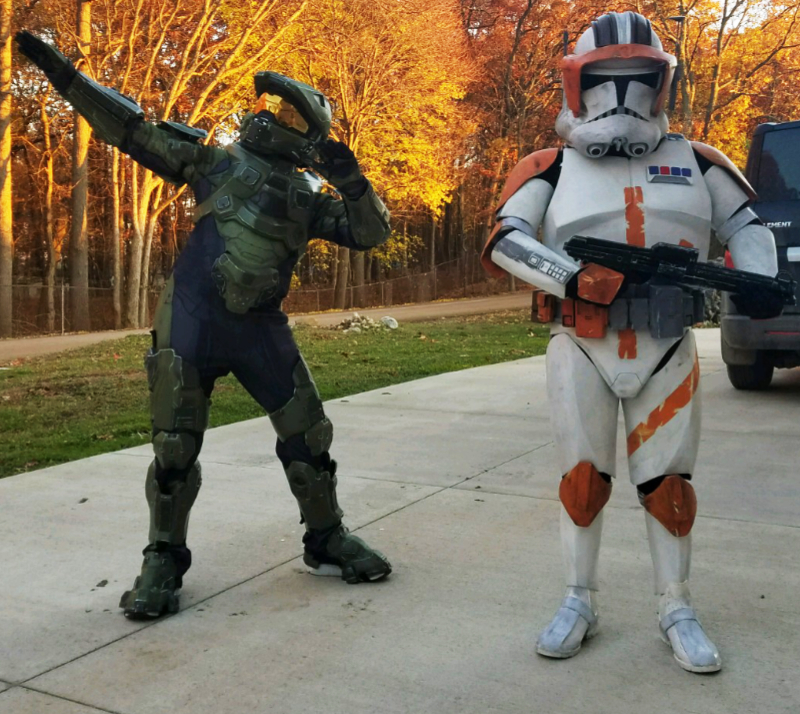 Thanks for your time.
Gumby

Looks great! I love stories of Dad’s and Sons.

I’ve been thinking about getting a 3D printer. This definitely gives me the itch to get one.

Came out very well. Awesome Halloween costume for sure!!