Since 2010 seems to be the year of prototype/concept SS Builds, it got me thinking about the Cantwell TIE prototype. The reference I have is low-res. So rather than have a dormant build thread showing my TIE frame for years :lol, I thought I'd start a research thread and maybe encourage an RPF CC TIE Builder's club.

I have only seen three visual references to Colin Cantwell's TIE Prototype. Stephen Sanweet's "Star Wars: From Concept to Screen to Collectible" Thanks to our friends at Rebelscum for documenting the Ralph McQuarrie exhibit at C-V. 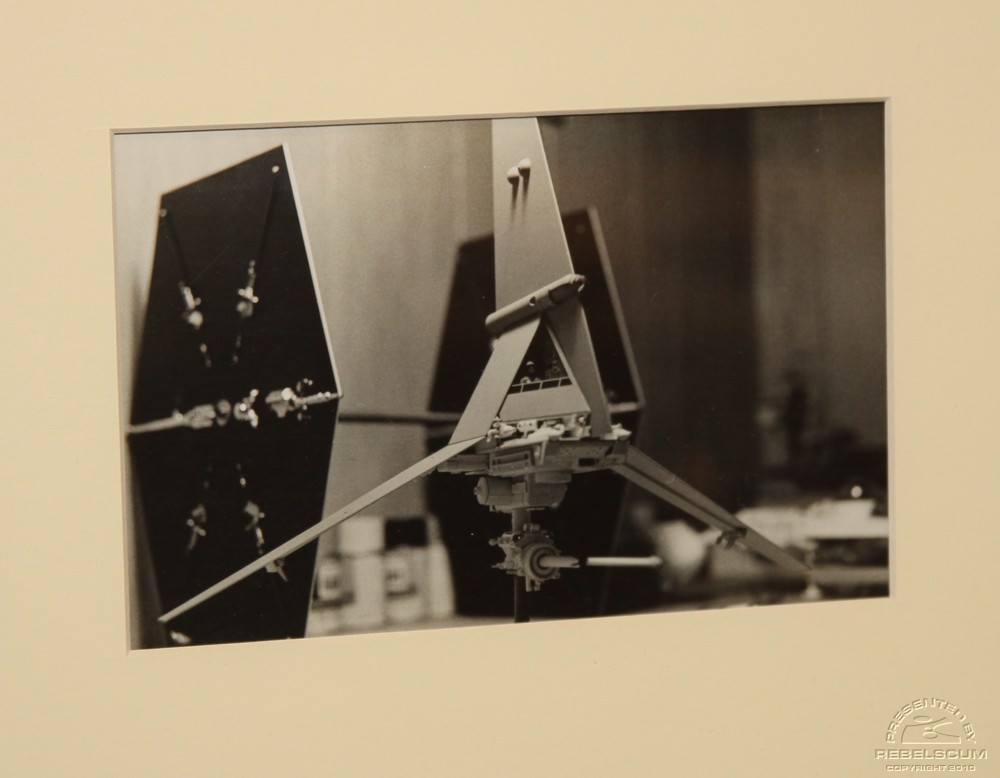 The "From starwars to indiana jones: The best of the lucasfilms archives" book claims its 34x30x37 cm It also has another picture of it..
P

that would be great , those wing details are tough
S

If you DO make an exact replica, just don't show it to people when they come over.


They will think you are "special". :lol

If you DO make an exact replica, just don't show it to people when they come over.


Steve, you ball-buster. So I should put you down as a maybe?

I want to be EXTRA-special!!!

Now, I have to go find some pastel-blue spray paint.

SD Studios said:
Now, I have to go find some pastel-blue spray paint.

HAHA :thumbsup I think I have a lead on the original blue.

The cockpit ball reminds me of the eye-balled alien from Monsters Inc.

I've always wondered how much Lucas paid Cantwell for his prototypes.
K

Cantwell is my last name. LOl

INCOM said:
I've always wondered how much Lucas paid Cantwell for his prototypes.
Click to expand...

Excerpt taken from J.W. Rinzler's The Making of Star Wars. [Page 35/36]
Another artist hired was Colin J. Cantwell, whom McQuarrie says was on the production before him, but only by days or weeks; accounting records show that both began to be paid in November of 1974. Once again Hal Barwood was instrumental, having recommended the model maker to Lucas. "I went out to see this thing he was doing for the San Diego planetarium space show," Lucas says, "and I hired him to help me with some models."
Like the production paintings, the models were being build to help formulate the budget--but the were also important to the film's special effects, which Lucas knew would make extensive use of miniatures. Cantwell was one of "the class of 2001," having worked with Douglas Trumbull on Stanley Kubrick's classic 1968 film, as well as with Trumbull again on the Andromeda Strain (1971). An experienced model maker, Cantwell also had a tremendous collection of space models and gadgets at his home, acting at times as a "space consultant."
Lucas worked with Cantwell as he did with McQuarrie, providing reference material, verbal descriptions, and his own sketches. Work with the model maker went more slowly, but as Lucas signed off on approved spacecraft, McQuarrie incorporated them into his paintings.
The third artist the director hired was Alex Tavoularis, who started in mid-February 1975 to draw out storyboards of the opening sequence to help calculate the costs of those special effects shots. Alex was part of Coppola's circle, the brother of Dean Tavoularis, who worked on The Godfather.
Although the trio's work was specifically designed to get the film made, Fox would not pay any of them. And the $15,000 they they'd given for the development was nothing near what was needed; Cantwell alone would cost $20,000. Lucas was obliged to pay them out of his Graffiti profits. If not for his cash, it's very possible that The Star Wars might have irretrievably stalled.
Last edited: May 30, 2010

I think I see the hilt of a Sword in there.

I am really hoping this thing goes on tour somewhere. (cough, cough C-5). I think LFL keeps it for nostalgia, but think they agree with SDS about it's popularity. :lol

I originally hated it years ago, but have really grown to like it. Must be one of the so ugly it's cool things.

OMG I see what you mean.

Look at the horizontal chrome details along the inside and outside of the wings: one side (either the front or the back) has more greeblies than the other. Depending on the pic, the 'greeblie-heavy' side is either at the front or at the back.

Either the wings or ball rotate freely along the 'axle', or the front and back of the ball are identical.

Good catch Mike! Maybe the cockpit gyros like the B-Wing, since there is no up or down in space. :confused

It also might not have a panavise mount, if those radial fins are centered at 12 and 6. I might make radial fin panavise plugs at 12 & 6 for mine.
D

RPF PREMIUM MEMBER
Hard to tell but did he use the pill bottles (4) for the wing struts?

dirtydave said:
Hard to tell but did he use the pill bottles (4) for the wing struts?

Dave,
it sure looks like it to me. The center ridges on each side look like the tops were butted. Man, Colin loved pill bottles didn't he.

darth_myeek said:
Dave,
it sure looks like it to me. The center ridges on each side look like the tops were butted. Man, Colin loved pill bottles didn't he.

I guess he needed $20k from Lucas to support his drug habit. :lol

Which became much worse, AFTER working on the film...