This is my first post here on the forum and I am glad to be here.

My wife bought me a Printerbot Metal Simple 3D printer for my birthday and I started looking around for things to print on it so that inevitably took me over to Thigiverse and I ran across some Destiny stuff on there. I found out that a user on there has a website called DestinySTL. They guy that runs it created/modified STL files from the game data. Anyways, I was showing it to my son and he asked me if they had the Coiled Hiss 1919 pulse rifle on there. Sure enough they did, so I downloaded it.

For this, I am going to be using three main pieces of software, all of which are free to use.
1. Netfab Basic
2. Meshmixer
3. 123D Design

Here is what the STL looks like in Meshmixer.

It does not exactly match what is shown on the image from the game, but that's okay. Also, My son was not too keen on the slanty bit in front of the scope so I took that off.

So this left us with the red dot type scope on it and he approved so it was time to get to work editing the file so I could print it. I am limited to a 6" x 6" x 6" print area and the over all length of the prop will be 34", so there will be a lot of splitting of the model that will need to be done.
After splitting that I took the fore end/barrel and had to split that up. I started by splitting it into roughly thirds.
First I split the fore end/barrel from the receiver/stock group. For this I used Netfab basic. It has a real easy to use cutting tool and makes quick work on cutting along the X,Y, and Z axis.

First I split the fore end/barrel from the receiver/stock group.

(Note: The image above is Meshmixer, I will show Netfab a little further down.) 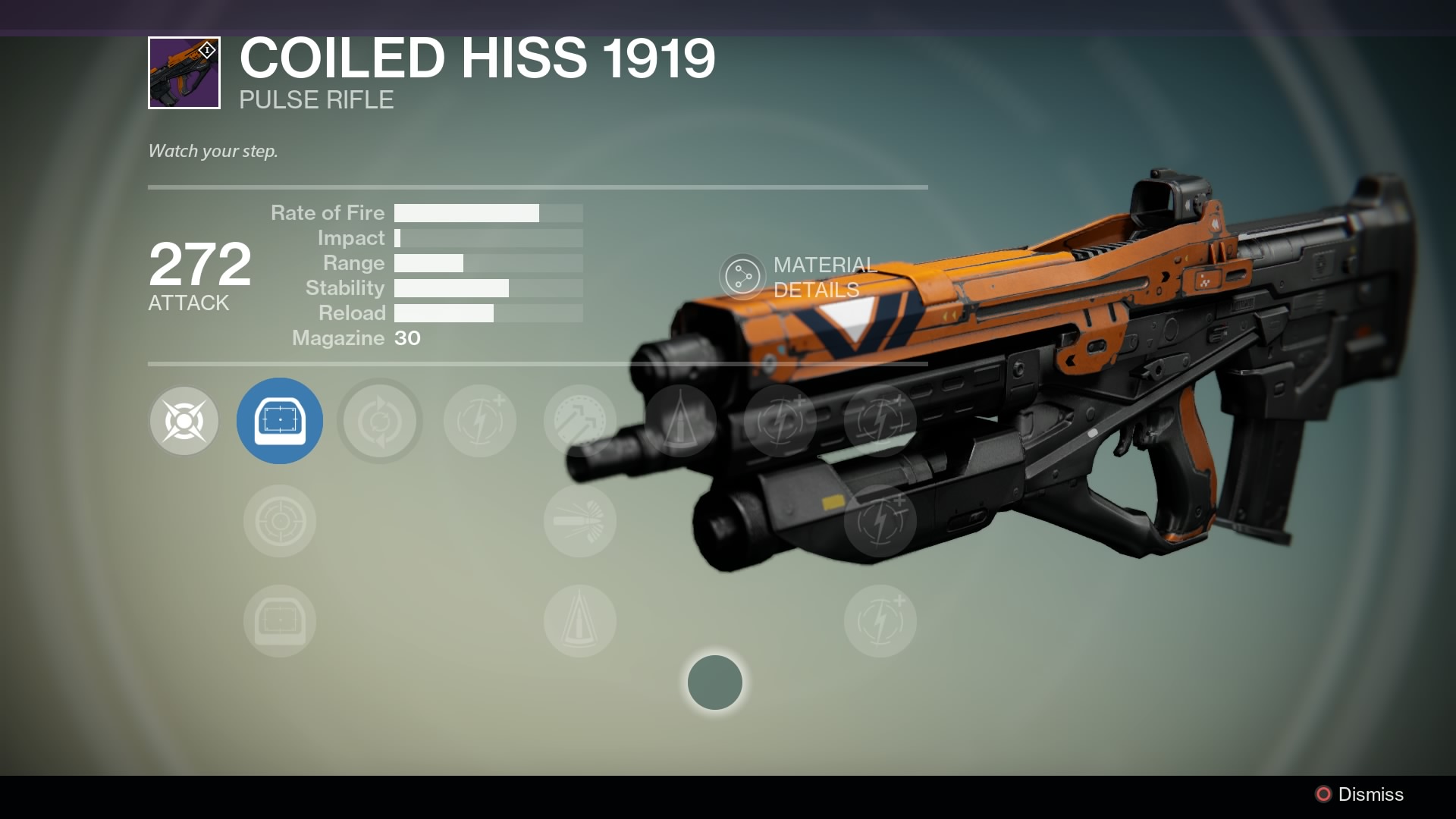 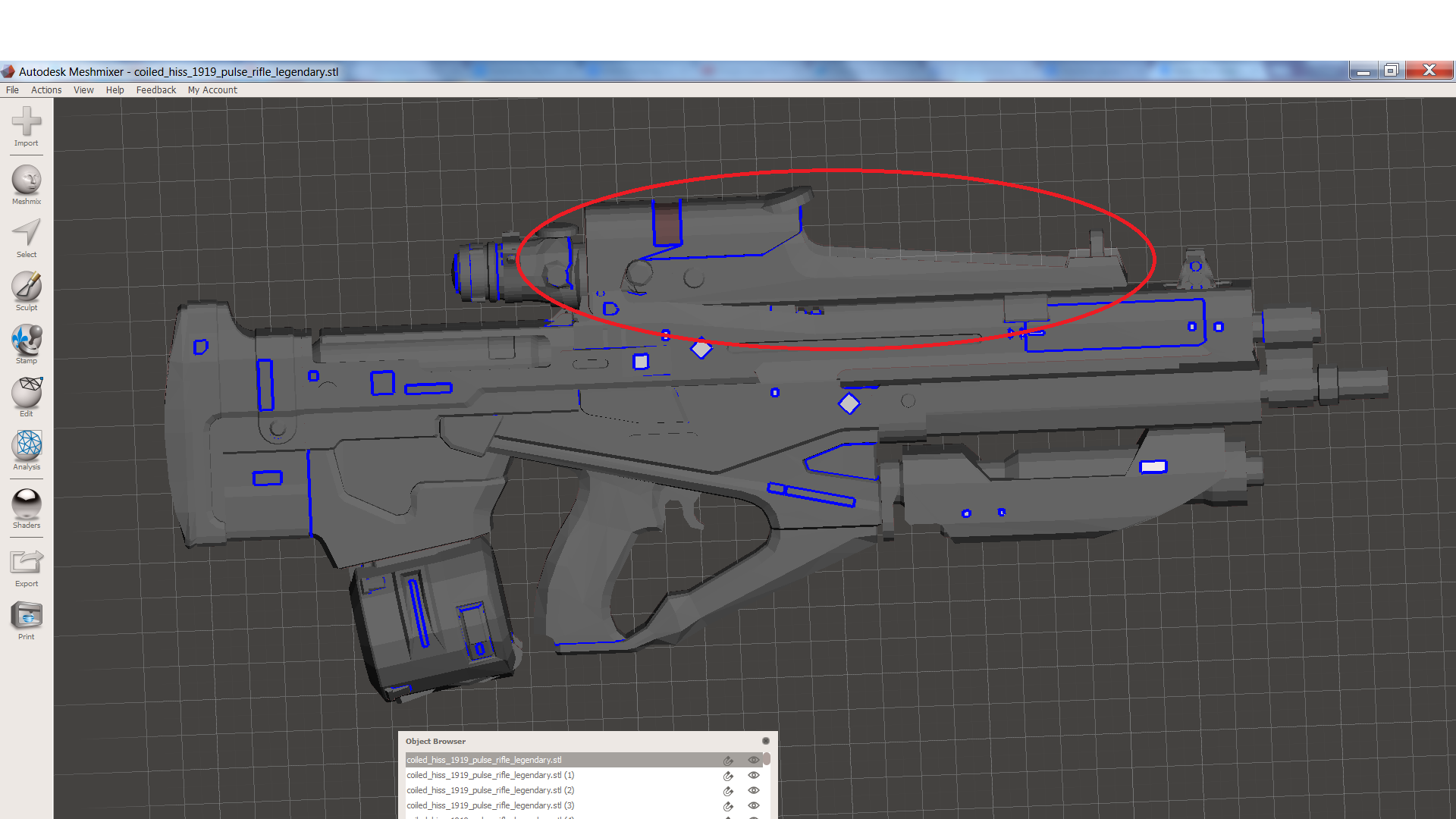 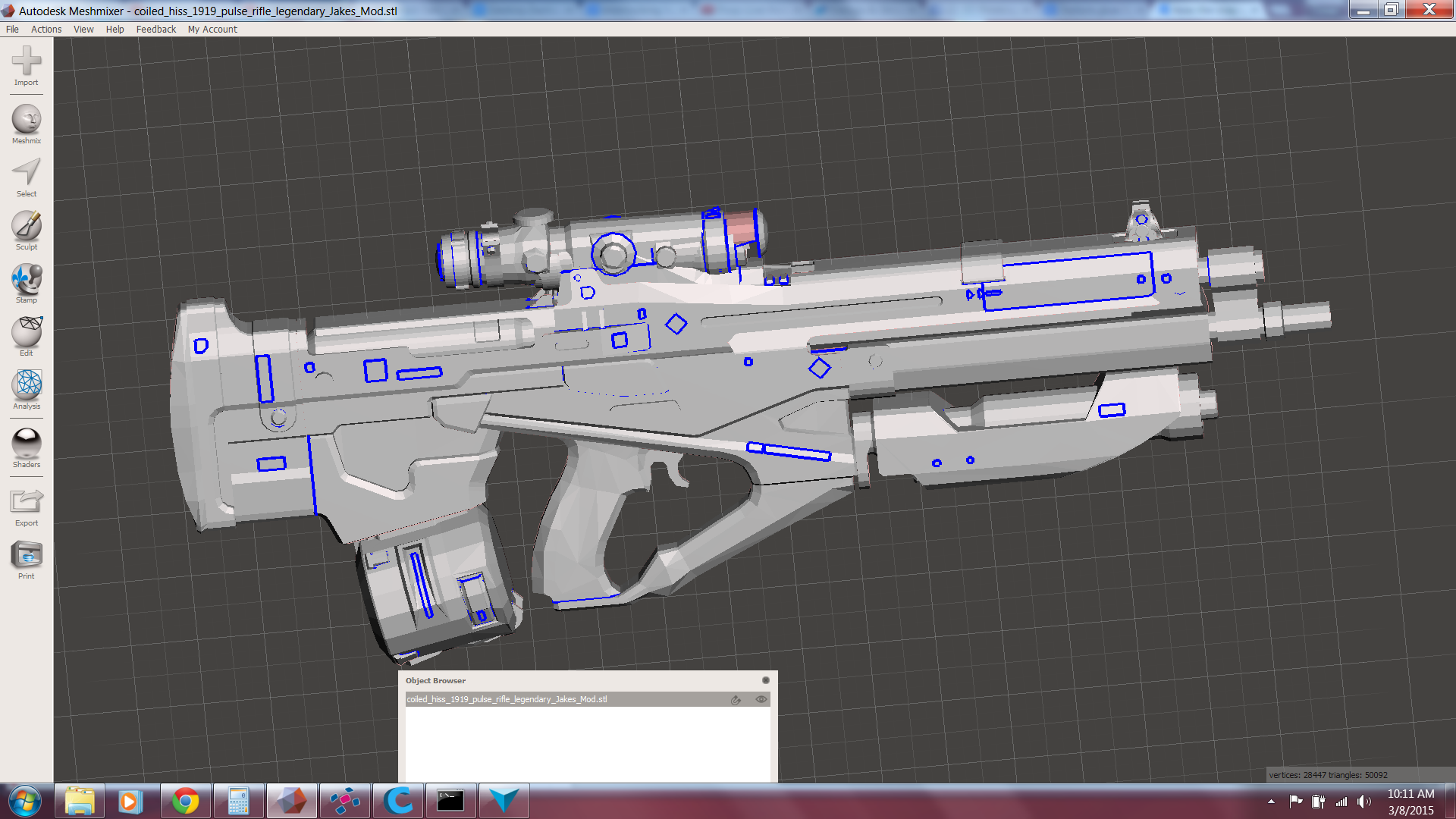 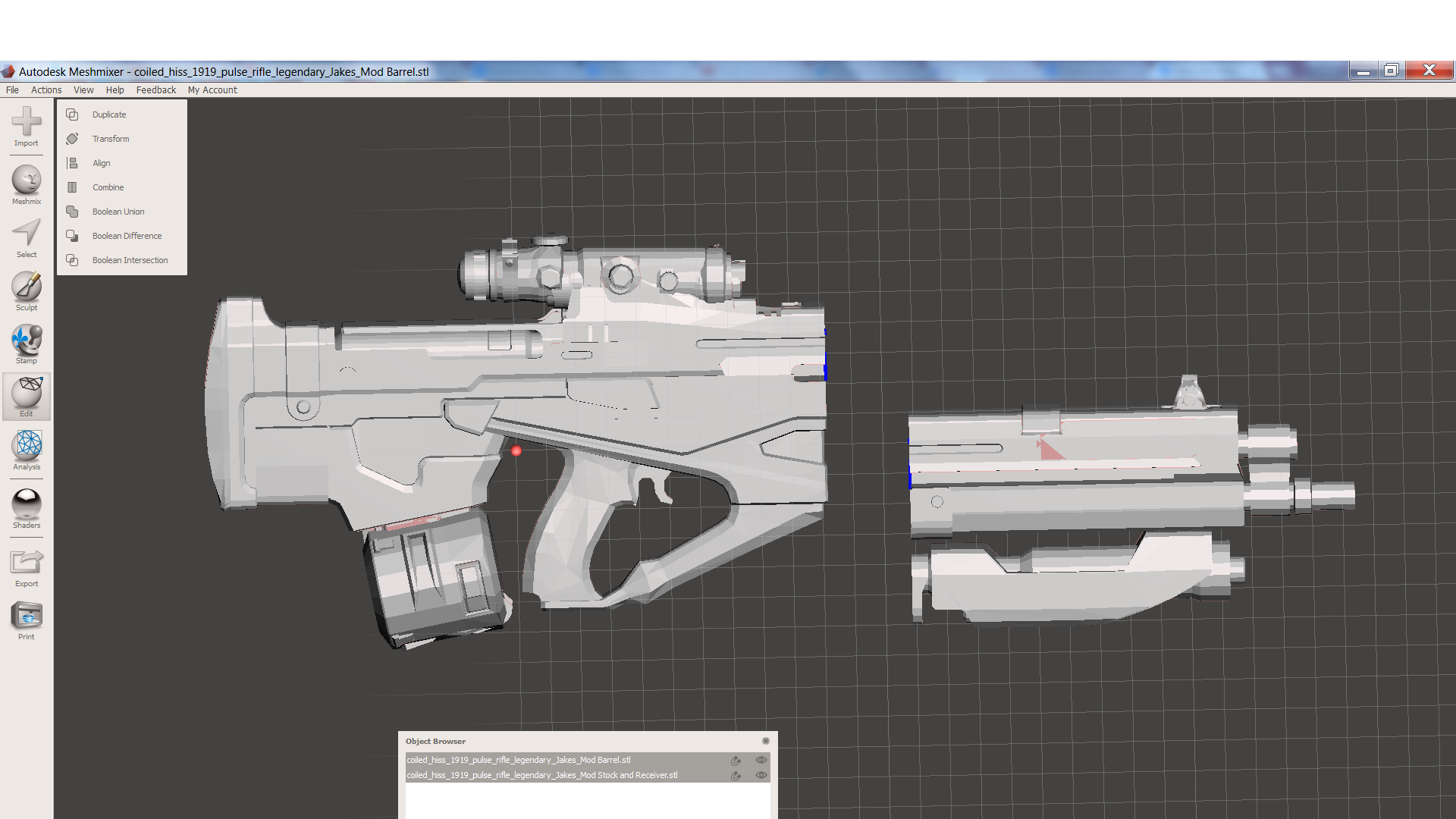 After splitting that I took the fore end/barrel and had to split that up. I started by splitting it into roughly thirds.

I then had to split up the lower portions from the upper portions and then split the those in half. These are what is going to be printed.

Before I print them though, some things need to be done for them to print somewhat well.

First off, when I split the STL files into pieces, they are mostly hollow. They need to be made solid for the next step to work. For this I am using Meshmixer.

To Make it solid, I went to the edit selection on the left and clicked make solid.

RPF PREMIUM MEMBER
nice looking rifle. look foreword to seeing how this turns out. but your second post links are not working...
O

Hmmmm... I uploaded the images. I will try that again.
O

Hopefully the images above uploaded successfully this time.

Once I split things up into printable pieces, I noticed there were gaps between some of the parts. To make sure everything stays together I placed some connecting blocks to keep everything solid.

If you notice below, the gaps on the part on the left. The blocks some add structural support.

Now that's done, I can start printing. Drop the files in Cura, the printing software, and wait for the printer to warm up and print.

One thing to keep in mind, 3D printing is not a fast process. The timer in Cura gives an estimated print time. So far it has not been right, especially on large prints. It always takes longer.

So about 24 hours of print time later, not counting failed prints, I have this.
View attachment Right Half Barrel Printed.JPG

I was running low on black filament so I switched over to white. The color does not really matter because I will have to fill some gaps and prime and paint it once its done. Also, nothing is glued together yet I am going to wait until I have some more of the parts printed out.

I will follow the same processes to print the rest of the parts and will post updates as I go along.
O

So I printed out the pieces for the the other side of the barrel and assembled them.
View attachment DSC_0024.JPG

However, I got a little behind on editing the other parts of it due to work. So I printed a Duke Mk44. Going to try and start painting it soon.