Heyo! I've been a huge fan of Clue since I was a child, mostly due to the film. I've been toying with designing a film version of the game since one has never been produced. Over the 12 months or so in anticipation of the 35th anniversary, I've been sketching and gluing and researching and loving all of the other people that have come up with versions of their own!

I ended up using the 70's design for the cards after initially trying out the 80's look. The 80's board is near and dear to my heart but after toying with the 70's look, I thought it fit with the film better. So far, I've got custom tokens, evidence cards, envelope, game box, card box, weapons box, pencils, evidence pad, instructions, and I'm adding in action cards as well. I did a ridiculous amount of research and screenshotting and test printing, as well as taking a lot of feedback from other Clue fans. RPF user Marc's custom design was a big point of inspiration and the guys at the The Art of Murder forums ended up giving me some fantastic ideas!

The text on the back (as well as "or Mystery at Tudor Close") comes directly from the original 1949 back-of-the-box, the version of the game that I figured would be in use in 1954, the setting of the movie.

For my version, I decided to include Yvette and Wadsworth as playable characters, as they feature prominently in the film.

The pawns were taken from the end credits. I couldn't find any version with a high enough resolution to work as character cards but I think they work quite smartly as pawns. Note that Yvette is on the clear stand, which hides her fishnet stockings underneath. 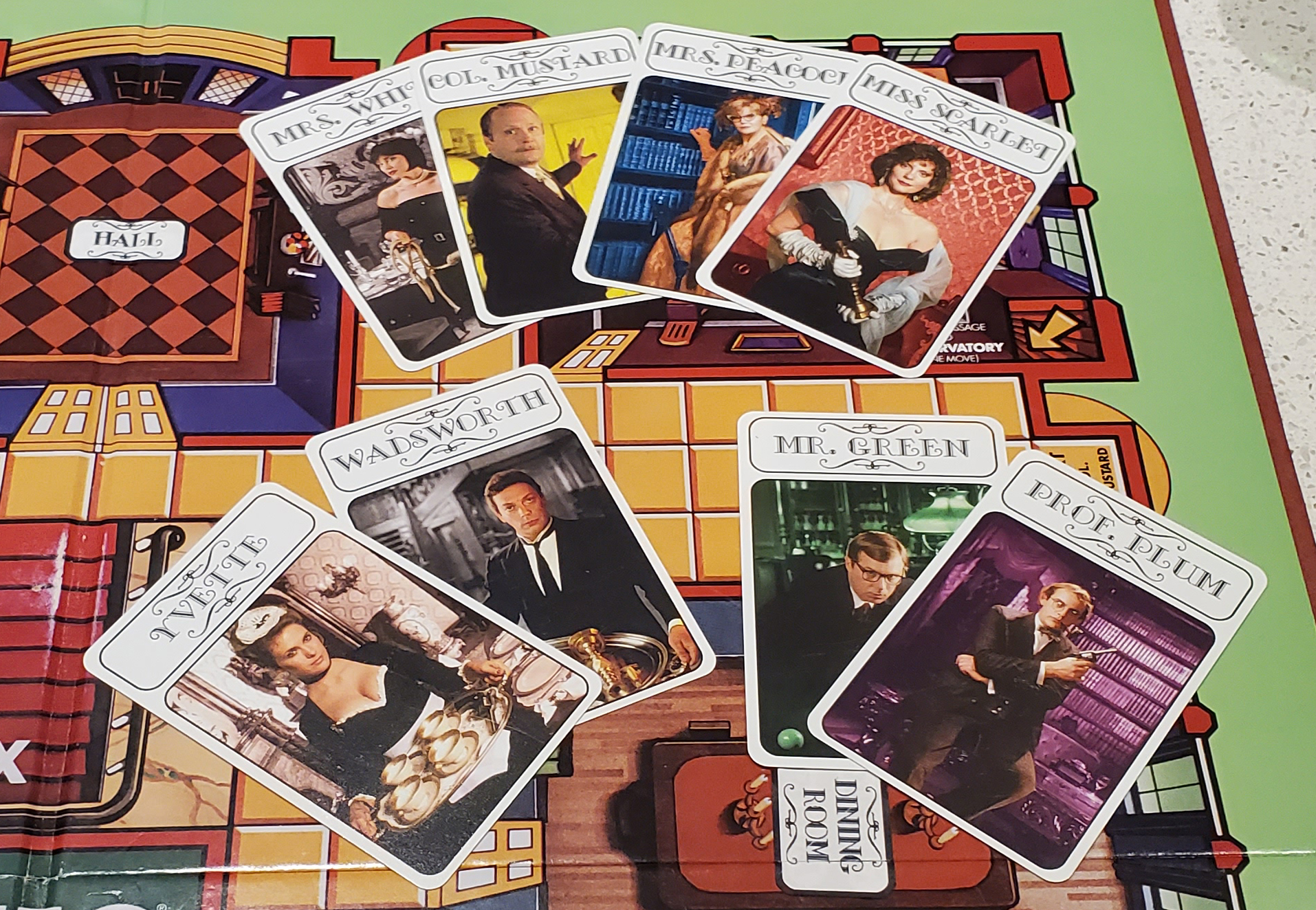 These were a bit of a pain, especially Colonel Mustard! I went through many different options and landed on those glamour shots everybody took, each brandishing a different weapon. There are HQ version of *all* the characters ... except for Mustard! I sourced the images as best I could, tracking down the Starlog magazine that I remembered from childhood. And wouldn't you know it, Mustard's is still the hardest to work with!

I ended up having two sets of suspect cards printed; one with the unaltered photos and one with spot coloring of the backgrounds. Once I saw them in person, there was no question the spot color ones pop so nicely for a board game.

For the longest time, I was trying to superimpose the weapons over an image of a black gift box with purple ribbon -- just like how they were received in the movie! But I proved too weak of a designer and couldn't make it work. I compromised with myself by choosing shots of each weapon being taken out of the box, then I had a custom box (simply glossy black with a purple ribbon) printed for the weapons. 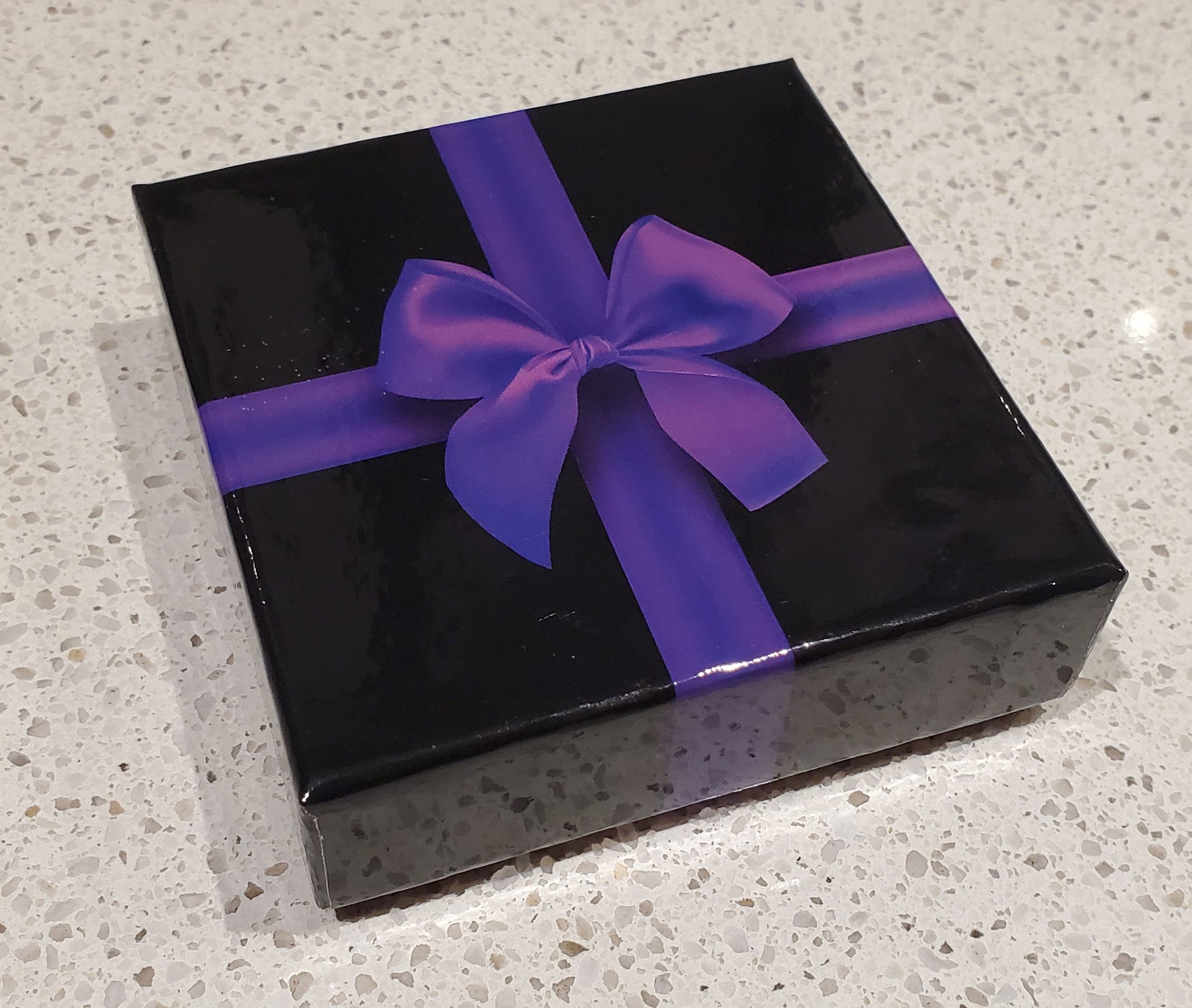 For the room cards, I simply tried to find a solid, representational image of each room but as empty as possible. I loved the what the 70's version did with the room cards (a simple texture from a wallpaper or textile in the room) and I'm been toying with my own board design. I've looked at enough stills from the film that I can pick out the damask wallpaper from the lounge! 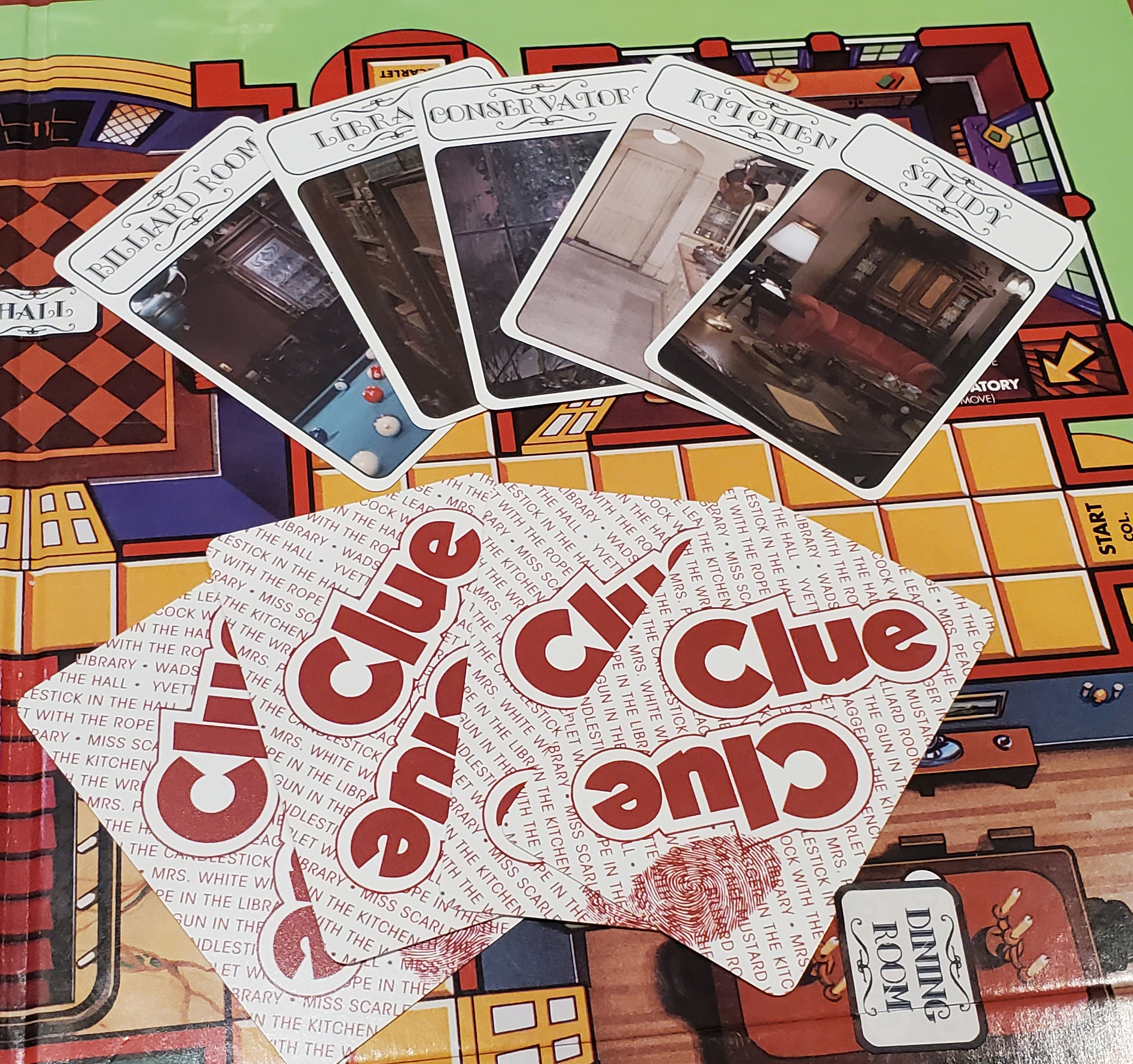 I don't remember quite where I saw "action" cards but, once I did, I knew I needed them for my game. How better to feature all the great quotes from the movie! For my version, each player starts with 3 action cards and may play any 1 card during their turn, in lieu of moving/accusing. The player and the player on their left must recite the quotes before the action takes place. 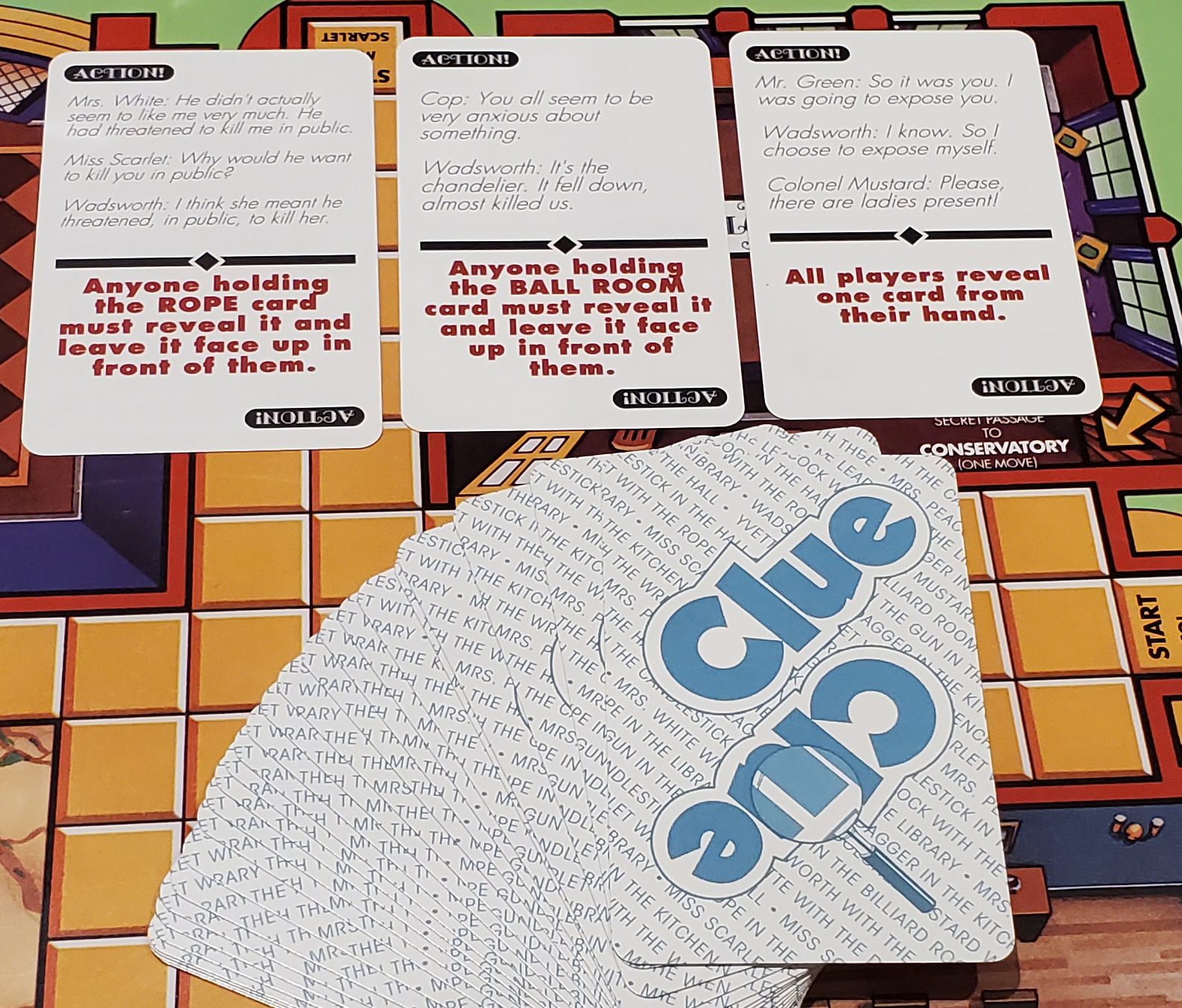 I took the card backs from the end credits. Instead of "Parker Brothers," I replaced that with the specific murders from the movie, in order, and including each ending. "YVETTE WITH THE CANDLESTICK IN THE HALL • MISS SCARLET WITH THE WRENCH IN THE LOUNGE", etc. The blue back is for the action cards, while the red one with the thumb print (also from the credits) will be for the evidence cards.

I needed a box for the cards in and, again, tried to pull as much from the actual movie as possible. I decided on the alligator case that Mr. Boddy carries with him. Unfortunately, mine was misprinted but I've got a replacement on the way (that will hopefully be a lot less dark so you can make out the pattern!). 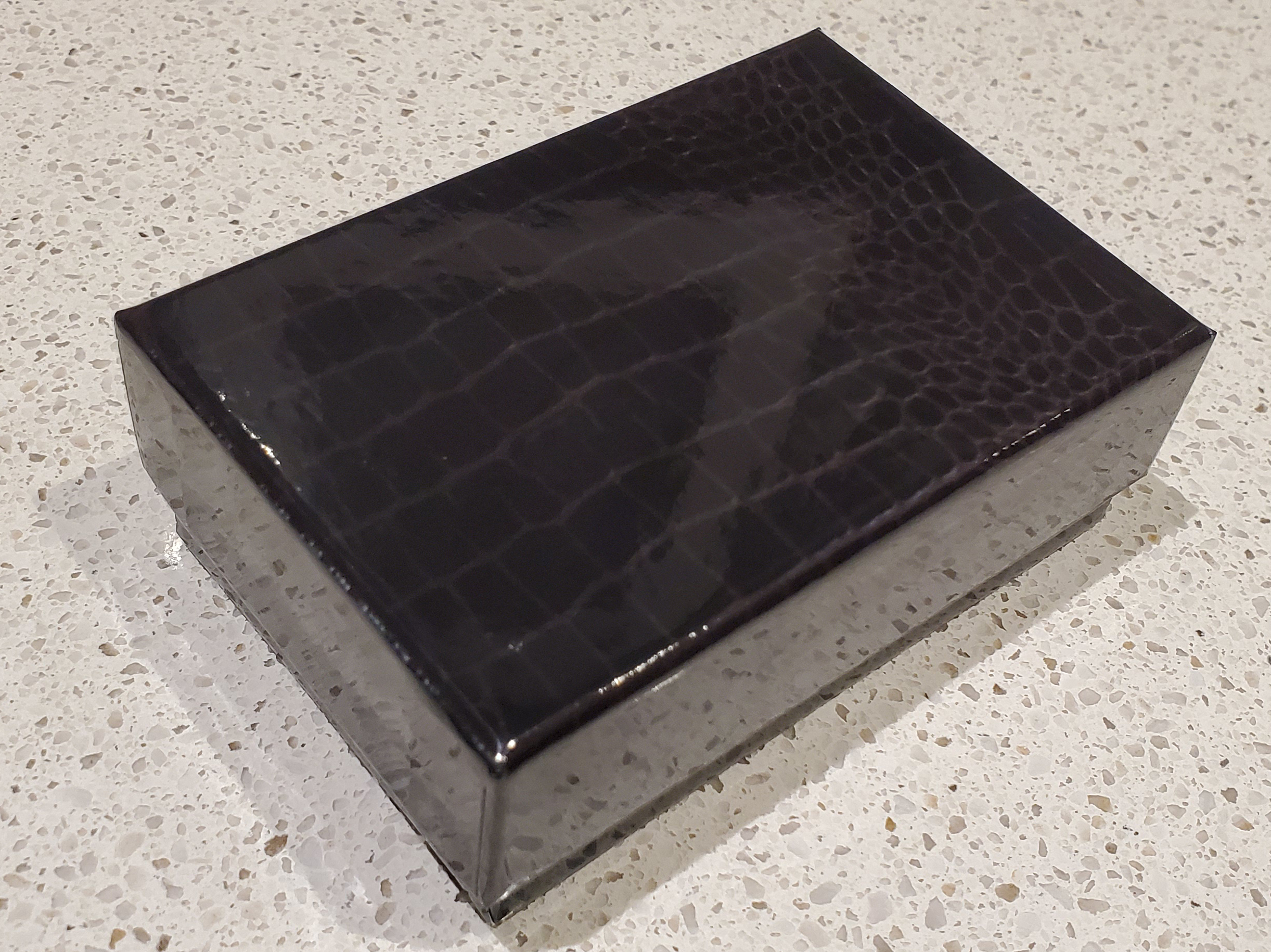 After reading that the original game used a black envelope, I immediately knew what to do for my version!

The evidence pad was a big head-scratcher. I played with a lot of different ideas before seeing that a particular version {Clue: Discover the Secrets (2008)} used a dinner napkin. PERFECT! Cantonese monkeys' brains can be messy, am I right? This one needs further work -- they never say "knife" in the film, only "dagger." 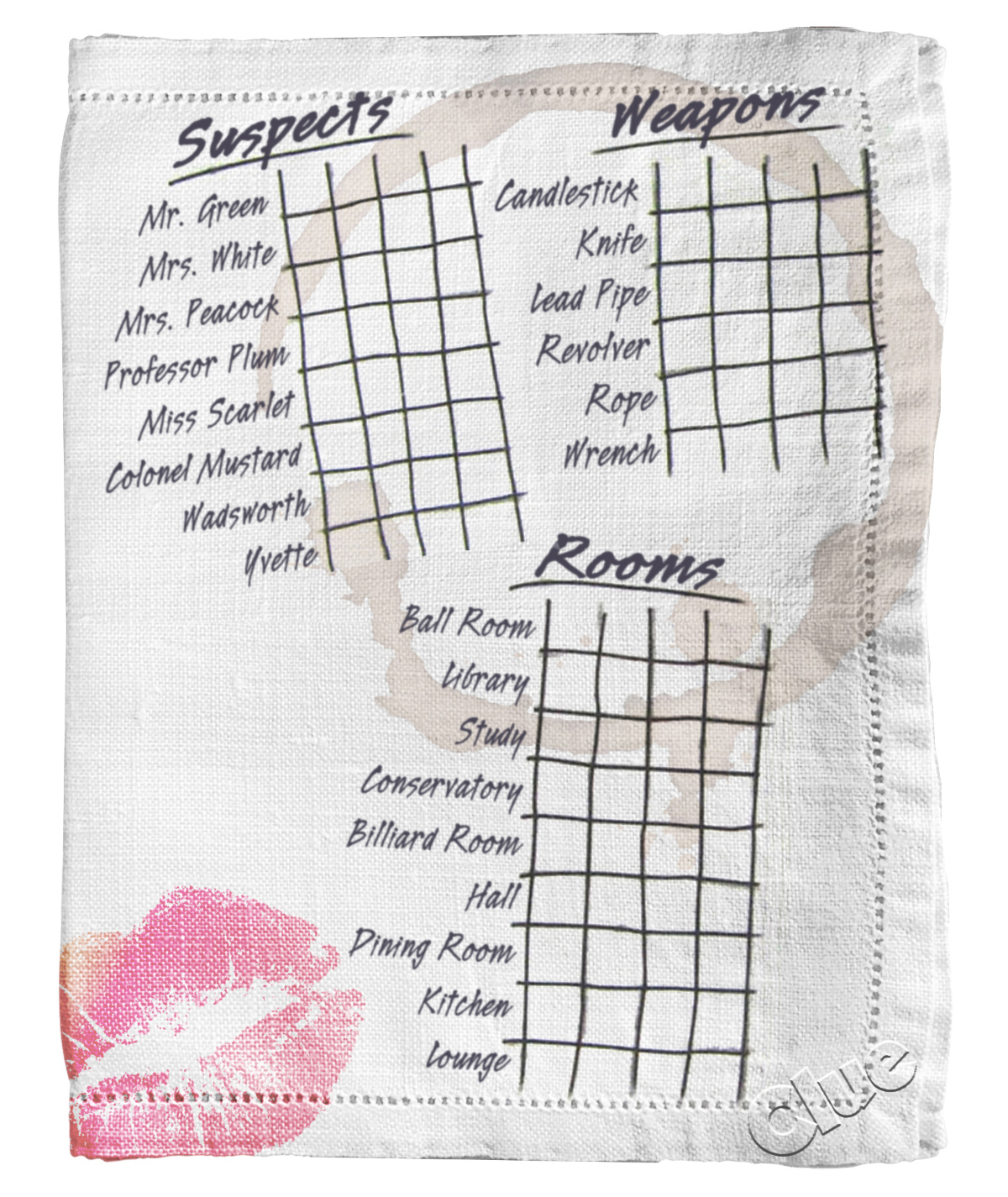 Thanks to Miss Scarlet and her ugly habit, I've got a unique use of writing utensils. These are prototypes, as I need better decal paper for final use, but the cigarette case is perfect.

My rules work as a trifold, being held in the manila envelope that Wadsworth opens. The letter that each of the suspects received (or at least my version thereof) acts as the "intro" panel to the whole thing. I based the rules off of the retro edition, incorporated in the tweaks of the film version and added a house rule or two. Also in the envelope but not prictured: a color-coded cover for each of the players, modeled after the invitation each suspect received. 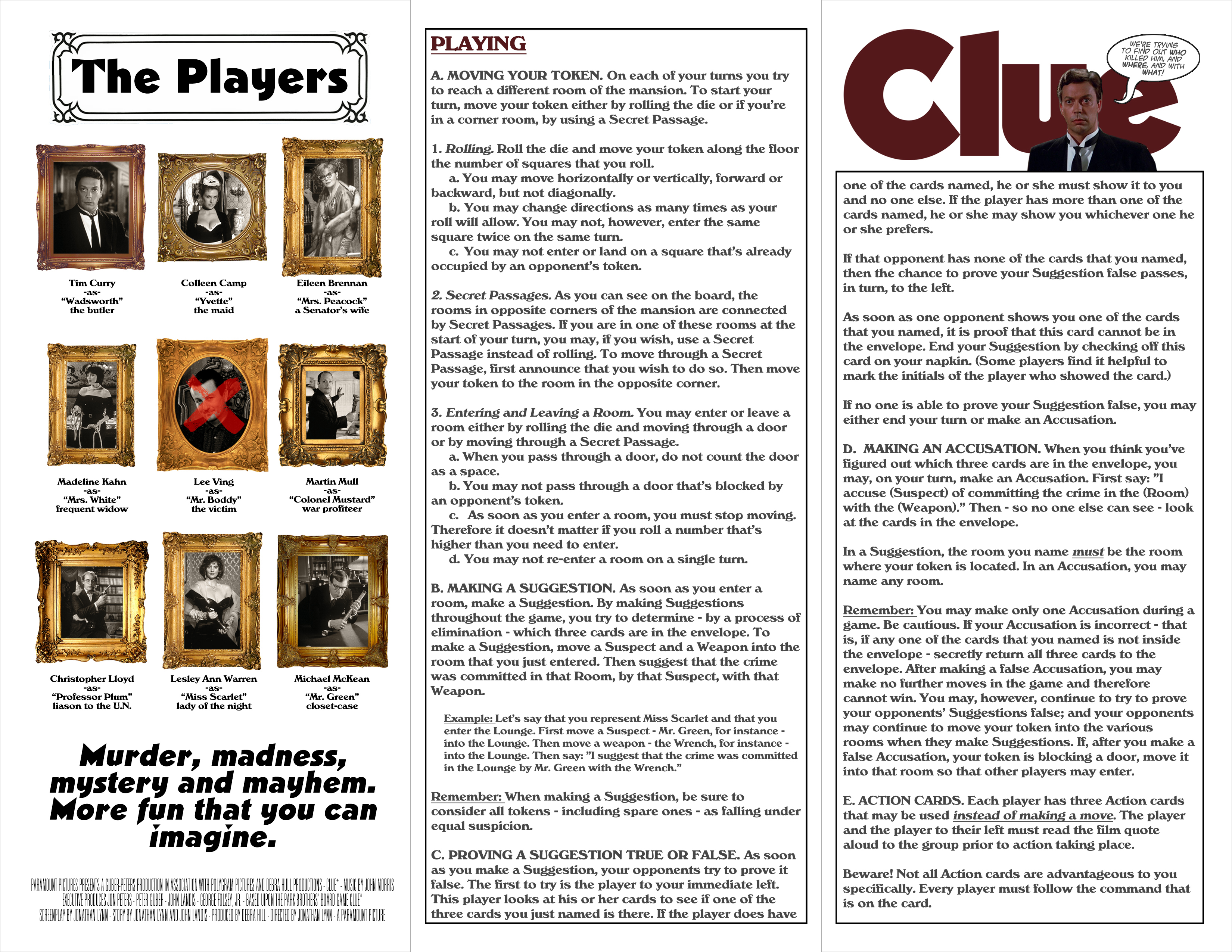 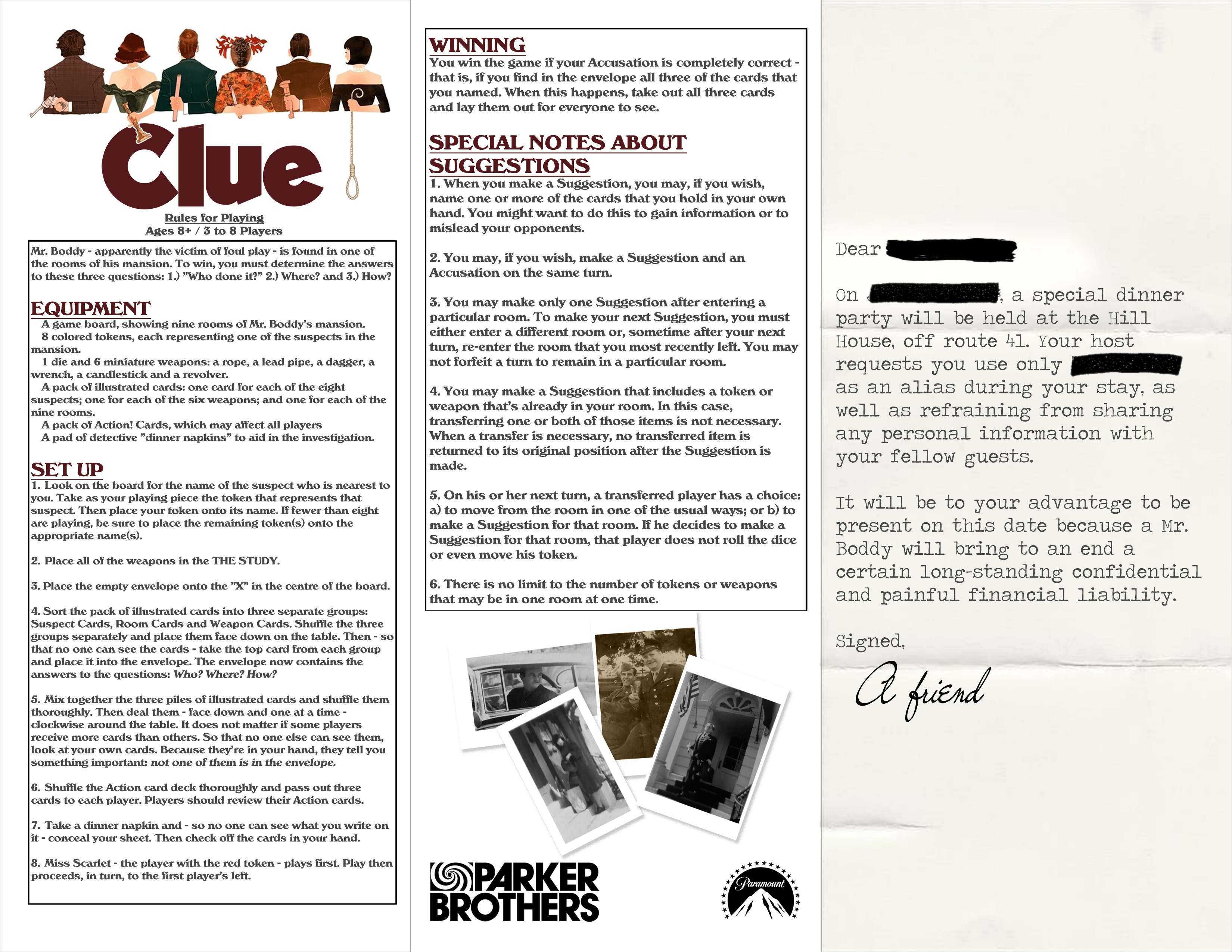 The Art of Murder forums gave me a great idea for the die, though my custom printed version is lost somewhere in postage ... 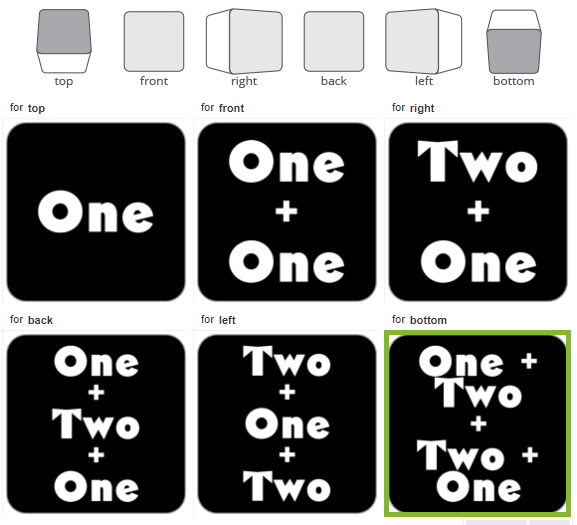 I'll be throwing a small soirée tomorrow evening to commemorate the 35th anniversary of the film's release. I didn't get everything finished like I hoped but, hell, I think things have turned out pretty swell by this point! I've now given myself a new deadline -- five years until the 40th anniversary! By that point, I hope to have 1) refined all my cards to my complete satisfaction, 2) found the right decals for the cigarette/pencils (or have custom printed pencils), 3) tweak the box design, 4) perfected a custom board design, and 5) have a billion dollars in the bank. Keep hope alive! 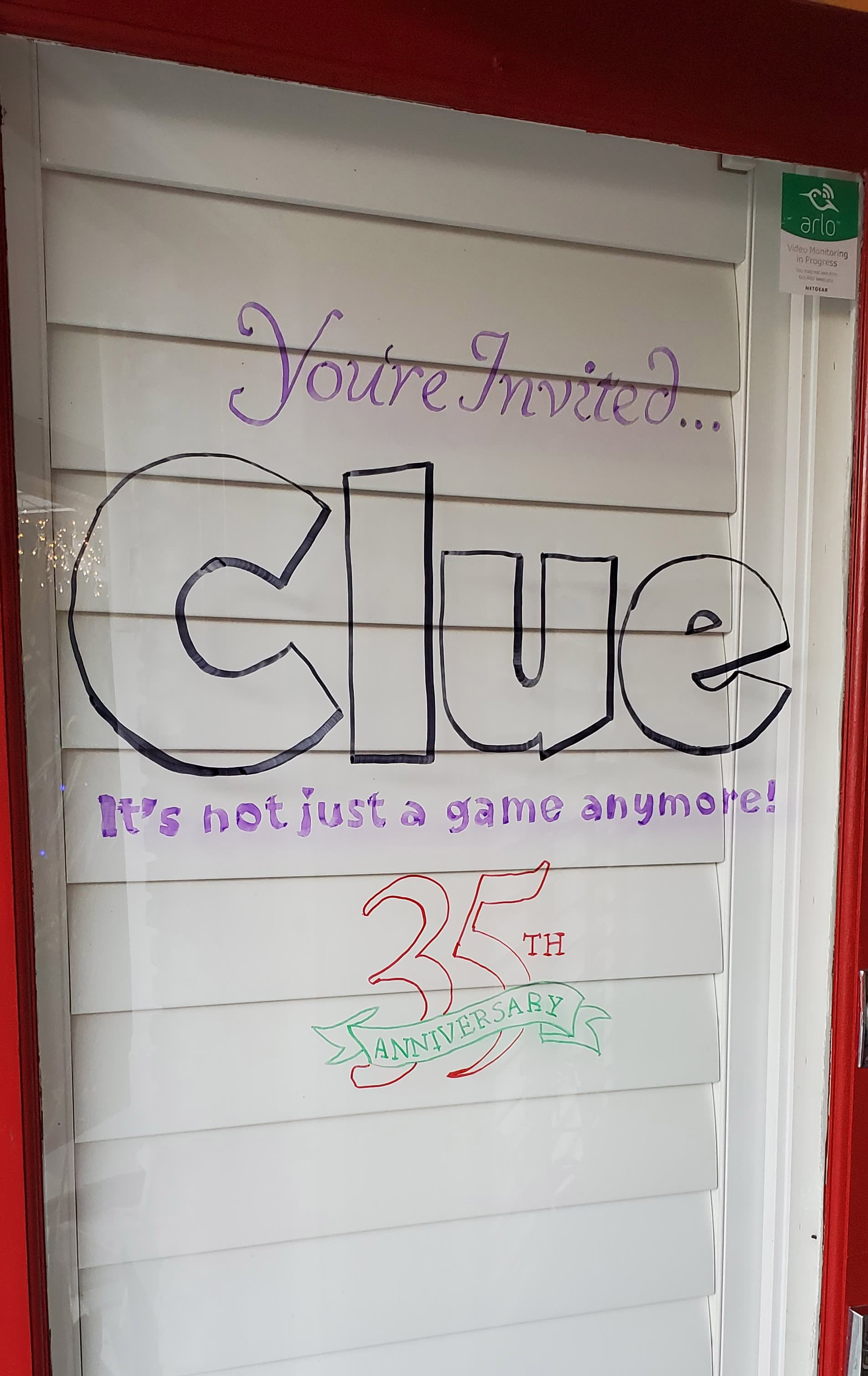 Love it! That's a fantastic amount of work there. Nice job! The idea for the die is hilarious!

RPF PREMIUM MEMBER
Really cool. Been years since I've seen it. Actually went multiple times in the theater to see the endings.

The dice, action cards, and even cigarette pencils are all very creative modifications. It adds to the original concept, to better match the movie.

I just watched Clue for the first time last night. I really enjoyed it! I love your idea of a movie-themed version of the game. Great job!

We've done a lot of play testing at my home on my modified rules and additions, things have been going great! I still plan on tweaking this a bit, particularly now that I have my own board idea. I'm looking forward to the next printing to see what I want to change next

Thanks everybody for the kind comments!

This is great. My wife loved Clue, the game and the movie. We used to buy the puzzles and do those too. She would have absolutely loved this.

I almost forgot -- I received the modified "alligator bag" box for the cards and I love it! All the time spent fretting over the darn thing paid off!

RPF PREMIUM MEMBER
I love all the little details inspired by the movie. The alligator case is one of those nice tie-ins.
Last edited: Feb 16, 2021

RPF PREMIUM MEMBER
I am...stunned by this. Just speechless.
G

Keep up the amazing work! And let us know when we can order this!

OMG!!! love it! Dude that's incredible. I'm so impressed with all the details. Please tell me your doing a run?

You are very welcome for the idea for the die! Hope they turn up as would love to see the end result! I would love a copy of the full game if that is possible? If not, just the cards and envelope would be great!

Ok. I took a snooze from RPF and missed out on the board game run by Marc Wagner. Don't you dare do a run on this masterpiece without hearing from me!

Thanks, guys! I only produced my stuff as a lark, because I love the movie and the game so much. I wouldn't have the first idea of how to do this one a larger scale -- but I'm open to it! Once holidays cool down, I am hoping to figure out a lot of things, this game being another. My main plan for this particular hobby project of mine is to have every tiny detail (even a custom board, if I can figure it out) ready to create a set for the 40th anniversary in 2025. That should give me plenty of time to figure out how to make a board

This is absolutely stunning. Love seeing the movie celebrated in this way!

Your crafting efforts and choices are astounding and wonderful. If you are going to do a run of making this game, I am DEFINITELY interested in purchasing one from you. Please advise if and when this happens!

The project that WOULD NOT DIE!

I really appreciate the kind words from others regarding this project. I've had a lot of fun doing it and will definitely be looking into offering up custom printed offerings when I have reached a happy point of rest.

Saying that though, I just bought a Cricut Maker machine and will be using it add a few refinements to the board. At present, I am working on a box-insert "cover" that will make it a little prettier when you open the box. I want to make a more refined envelope but still in black. My tokens aren't quite up to snuff but I think I found a printer that can do what I am requesting. I still haven't gotten the dice printed up but that's coming soon, hopefully! As I'm sure a lot of you can relate to, I keep adding new projects to my To Do pile!

I haven't given up on sourcing as many materials as I can from the film. Luckily, a few recent Instagram accounts (particularly one from a guy that is making a documentary about the film) have gotten my creative juices flowing again. I remain committed to fully completing by the time of the 40th anniversary -- in three years ! That will also be around the 75th anniversary of the board game itself!

B
My attempt at Deckard’s Blaster

Jeff (Robot from the film Finch)