Hi, I've had the go ahead from Christies so here are some shots of the ANH/ESB armour due to go into the memorabilia auction on 23rd Nov.

Before I start I want to make it clear that I have no personal interest in this auction. I dont know the owner, never met him and have not been paid by either the owner or Christies (up front or a commission - not even expenses). I visited Christies offices a few months back and these shots were mostly taken in that viewing

I addition I really am not interested in having another forum-war about bits of plastic as I have other pressing things. I respect peoples views and if you don't believe that ESB Mk2 suits exist then thats fine. However if you're not able to detail exactly why you think they dont exist then please dont bother posting. There's no one in this hobby whose opinion I trust more than physical evidence, saying "I know thats not correct but I cant say why" just makes you look dumb!

A couple of months ago Christies kindly invited us down to its Kensington showroom to help them identify this slightly unusual suit.

We say "unusual" since though some parts are clearly Star Wars A New Hope (1977), but not all are and those were certainly not Return of the Jedi (1983) either (although they look extremely similar). Hence the suit is a kind of mish-mash of both armour styles. Parts including the belt, one forearm, and one bicep were clearly ANH, however the other parts including Chest, Back, Ab front and rear and leg sections were similar (but not exactly the same) to the style used in RotJ, yet we believe pre-date that movie by 3 years. 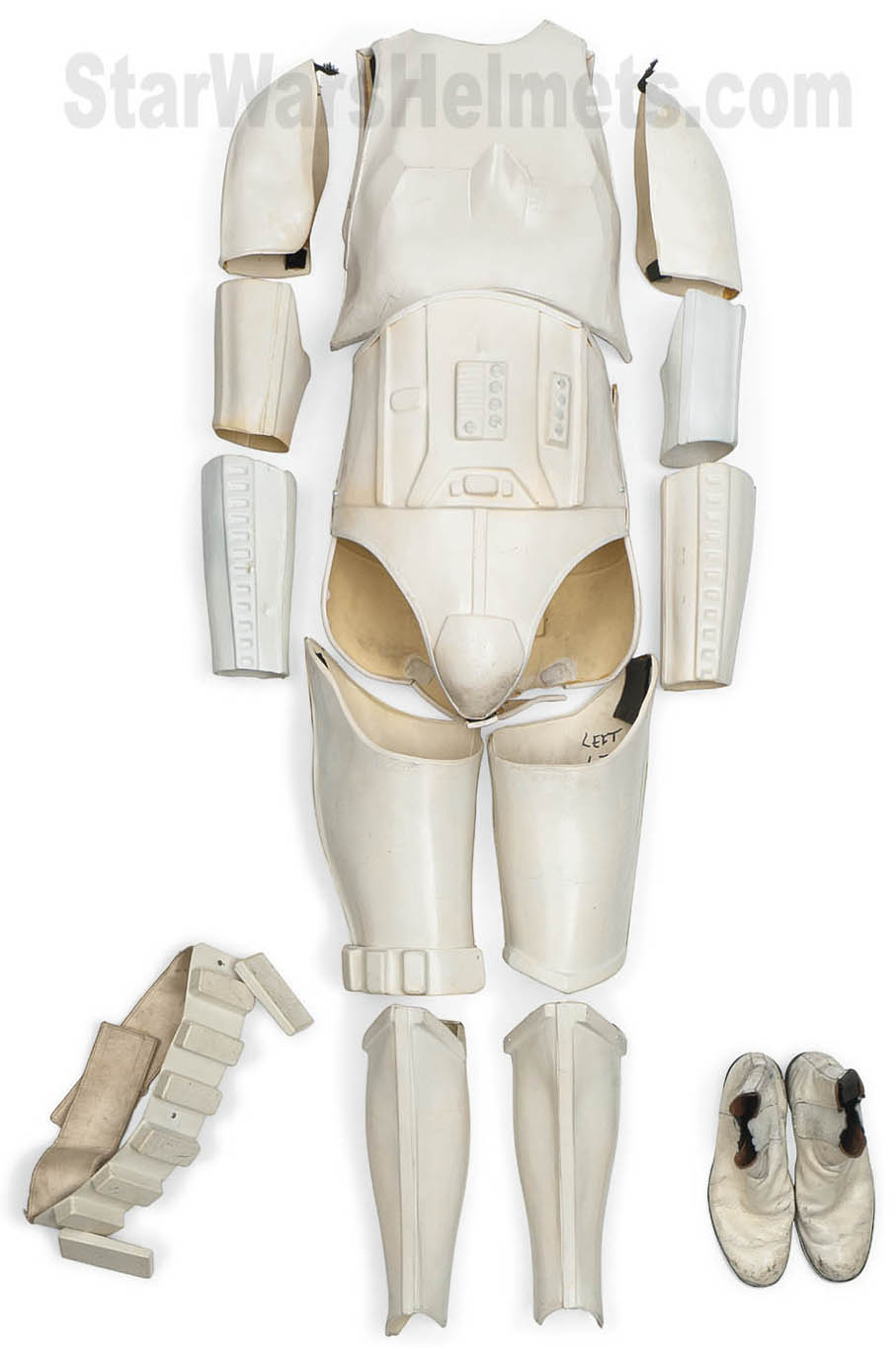 It didn't take long for us to realise that this was the illusive "Mk2 ESB" suit seen in the Publicity photos taken on Empire Day waaaaaay back on May 20th 1980 (the Trooper on the right in the photo below). Essentially this was a set made up from two different sources including left-over parts from ANH combined with newly cast parts made specifically for ESB by John Mollo's costuming department. 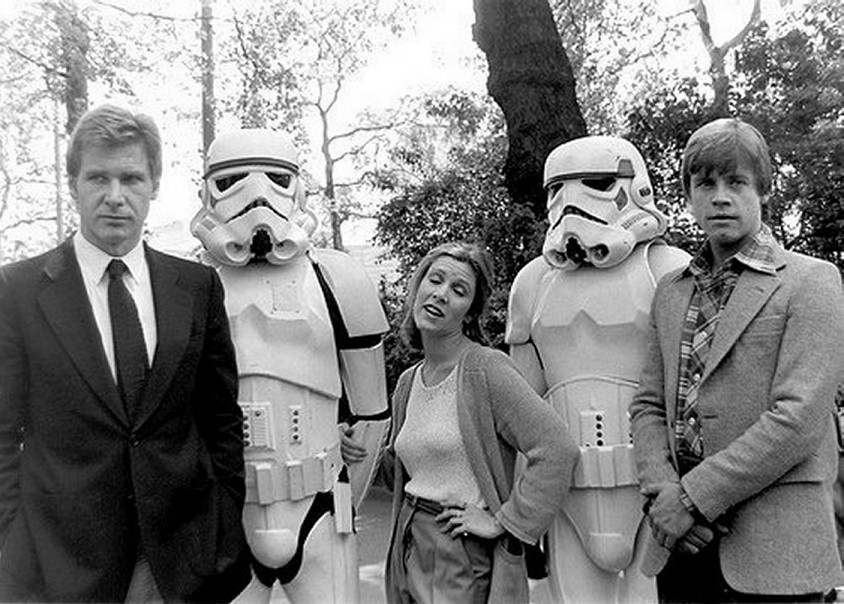 As an interesting side note, we also managed to identify the other trooper (next to Harrison Ford) but will talk about that at another time. However we're pretty sure that the suit in Christies auction is the one standing next to Mark Hamill, for example the cut lines and seams of the Ab section appearing to match up extremely well. To be 100% sure we'd need better reference material but in our view it looks very promising. By the way, I'm sorry to say we've not been able to locate the helmet that went with this armour.
The background to the ESB "Mk 2 " suits in a nutshell is; while making ESB John Mollo realised that there would not be enough complete sets of armour for some of the final trooper shots seen in the movie like the Bespin escape section scenes, so additional vac forming was done and a number of pieces were made to augment the left-over ANH parts. The vast majority of the armour you see in ESB (the "Mk 1" if you like) is simply the same reused amour seen in ANH - with the occasional bit of refurbishment thrown in. After some investigation we carried out a few years back we were able to determine that there wasn't enough complete suits for some of the latter scenes - thanks to Costume Designer John Mollo's detailed notes made at the time..... 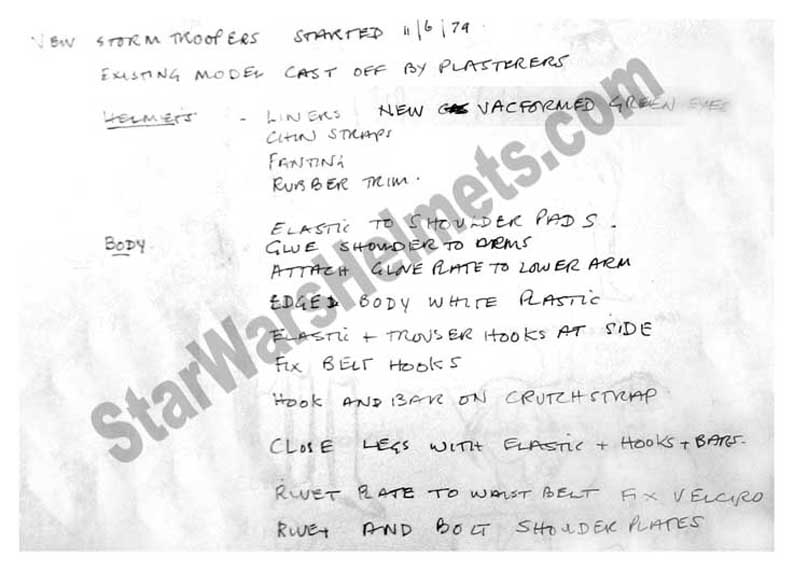 So we know that some parts were made - we just don't know which marts and the quantity. Again going back to John Mollo's notes we know that 2-3 days were spent (budgeted) working on this and the approx cost of the ABS.

Back to Christies Auction, below the chest and back detailing showing the edging strips which were added to all the new armour for RotJ, with this ESB armour acting as a kind of prototype to the RotJ look. Rather than made of standard white ABS (like the ANH sets), this is made from Haircell ABS which has a nice white front side, however the back has a rough texture and is cream coloured 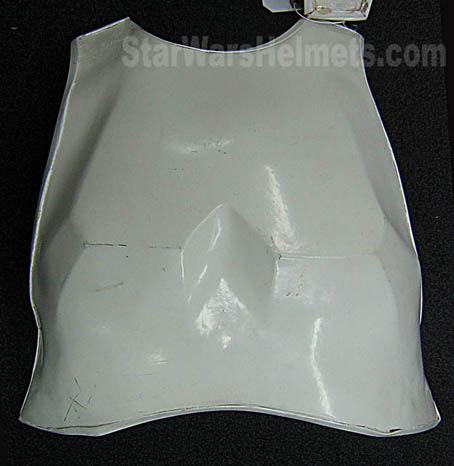 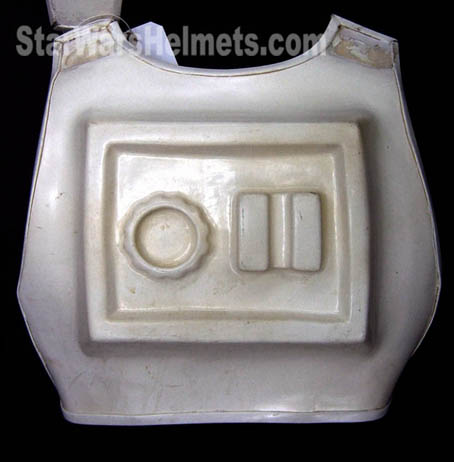 Next a shot of the Ab section, which appears to have been resprayed (at least in part) at some time. In addition, note the contrasting colour of the Haircell ABS's outside and inside surfaces. The texture is much different too from the ABS used in ANH which is pretty-much the same both sides. However for these armour pieces the outside is smooth but the inside quite rough - again a feature of Haircell. 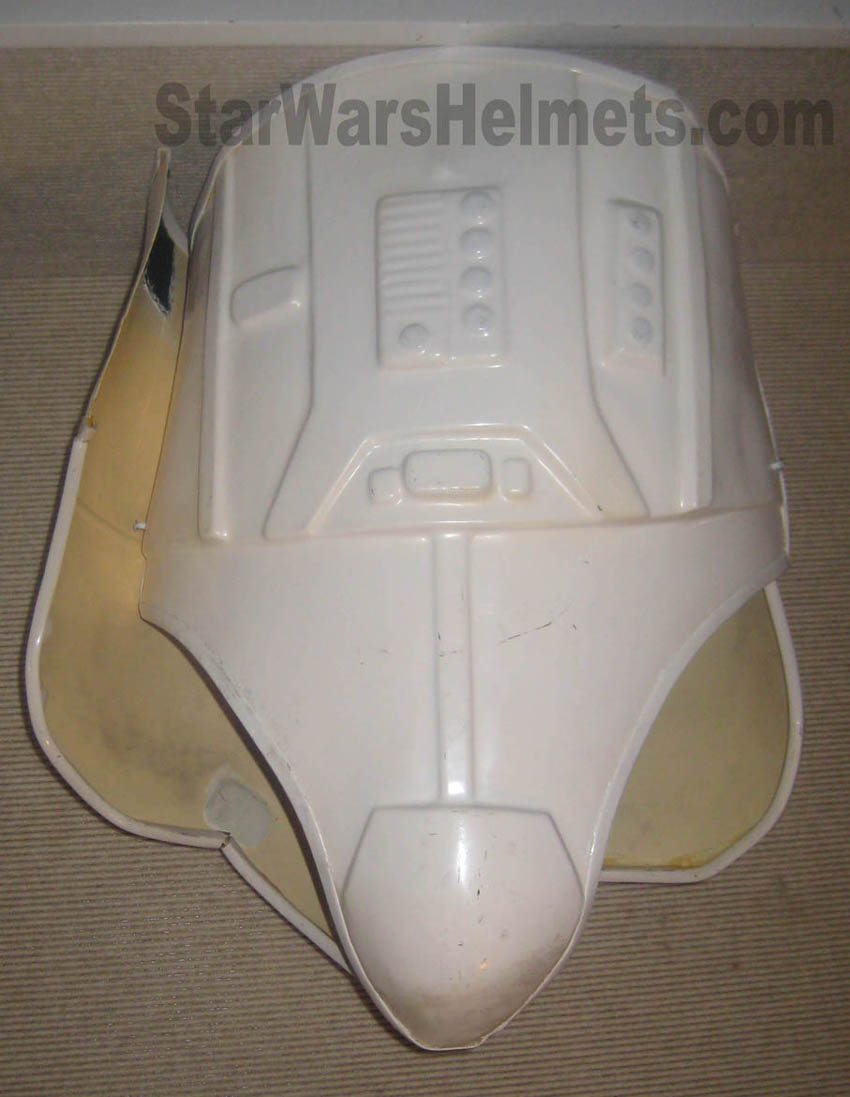 Below a photo of the ANH belt. Its made from all white ABS (front and back) , bolted onto a canvas belt section with the boxes attached with white elastic strips.

The bicep sections are very interesting since the one on the left is clearly ANH......whereas the one on the right is a ESB Mk 2 and made from Haircell ABS (again see the differing colour and texture of the inside surface)

Next onto the forearms and again we have this ANH/ESB mix.....

...Here's a good shot that illustrates the differences well. Note that the ANH forearm (left) has thick edging strips (e.g. at the 2 'o'clock position). The ESB Mk 2 on the right doesn't have edging strips and both semi-circle sections just overlap. Note also the difference in Mk 2 - not my hand BTW :lol 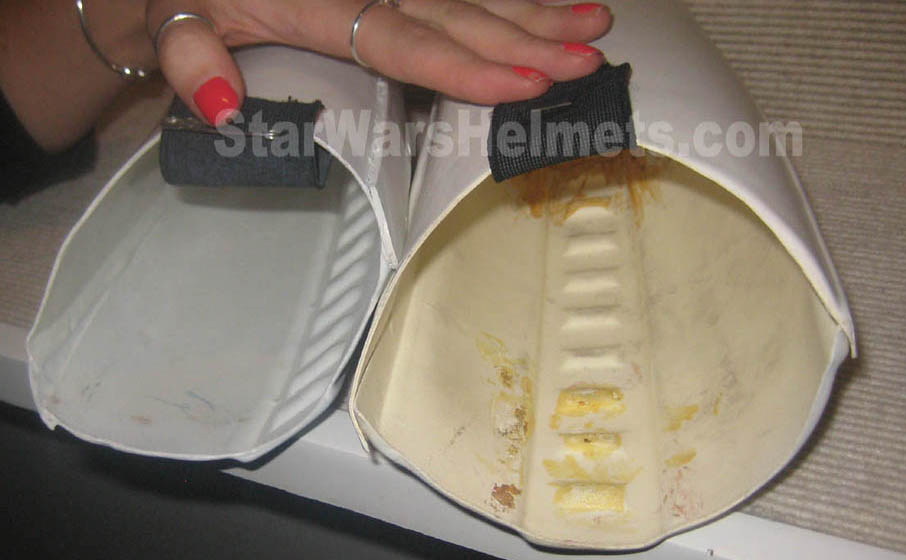 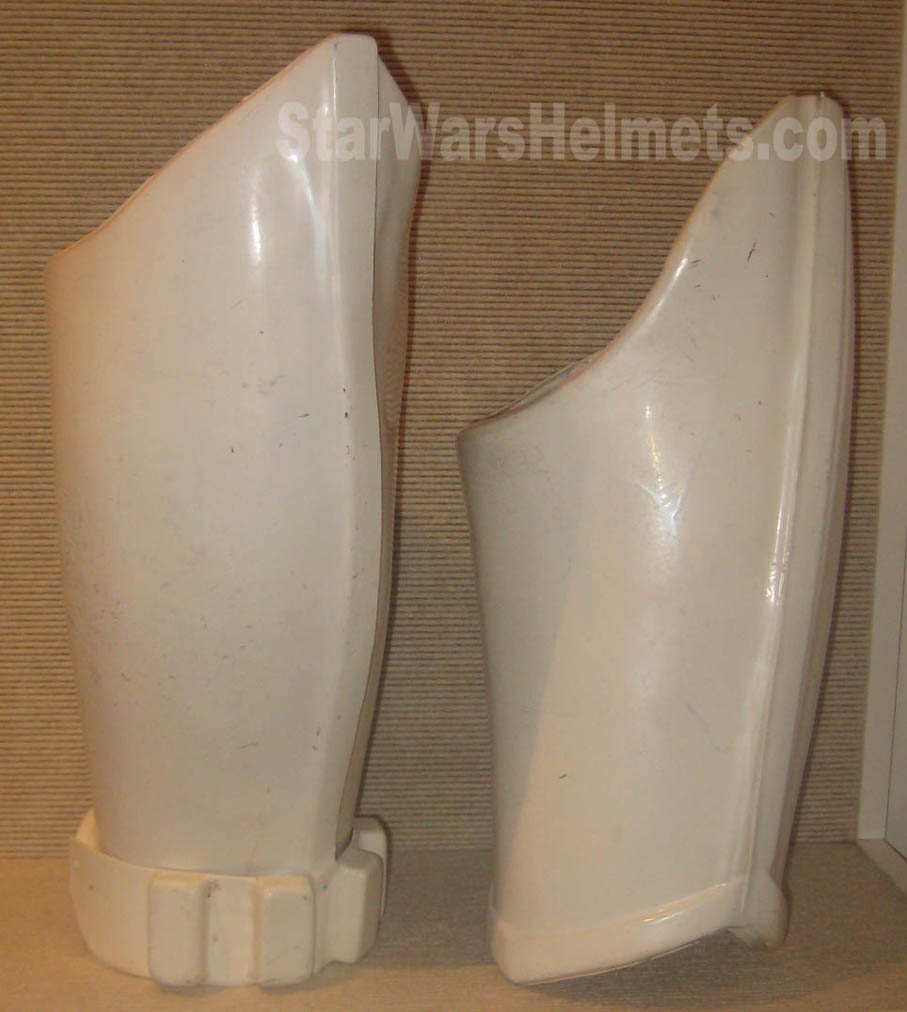 ...and finally the shin sections - not the best photos we'll try and get some better ones... 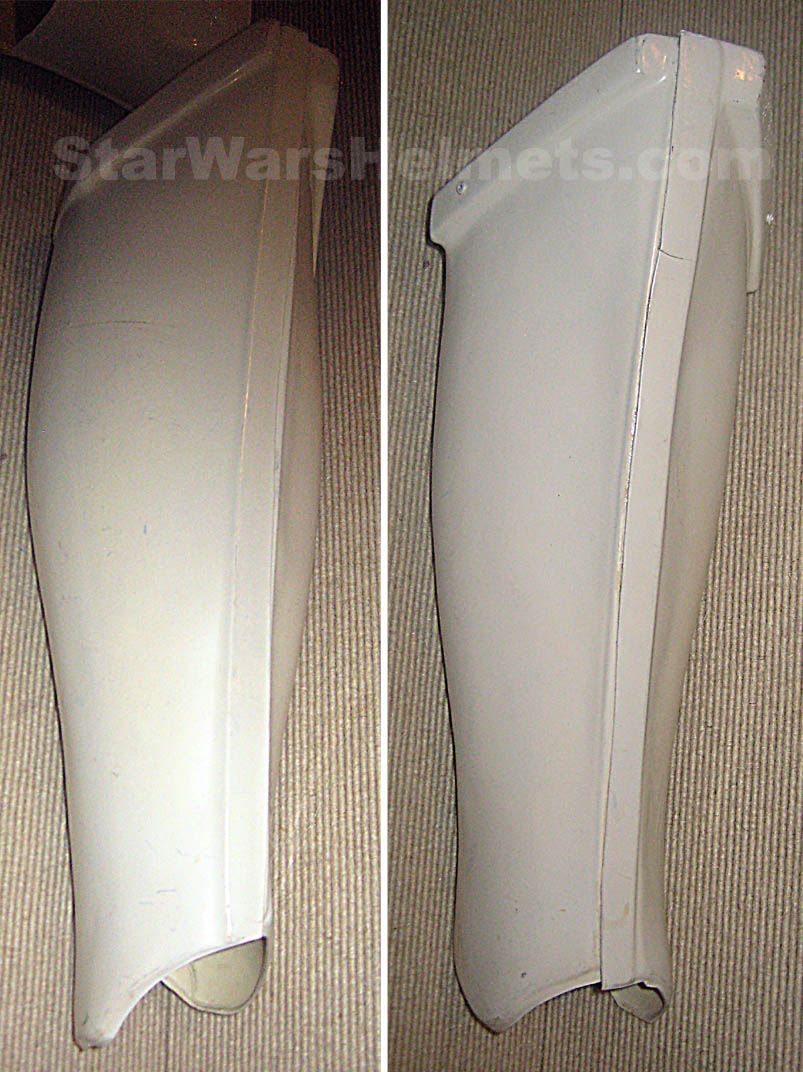 So in summary we have a wonderful piece of Star Wars history. Parts of the armour are production made (and most likely screen used) ANH Stormtrooper parts. Other parts appear to us to be production-made Empire Strikes Back parts (ESB Mk 2 ), which could be screen-used - however we just don't have necessary behind the scenes photos from the Bespin escape sequence to be able to verify this.

We KNOW John Mollo's team vac-formed additional parts (since they didn't have enough sets of armour to finish production), and we can be pretty sure that this is the suit seen with Mark Hamill at the ESB Premiere a few months later. What we cant say is whether this armour is actually screen-used since we cant tell from the few shots when all 10 or so Troopers were needed - even looking at the Blu-Ray release. If anyone out there has access to the Lucasfilm archive (or Gary Kurtz's negatives) and know of any better reference material then please let us know!

RPF PREMIUM MEMBER
Thanks for posting Jez. Some really cool stuff there!!

Like Ben said, thanks for sharing with us, Jez!
You know how much some of us appreciate your constant will to share your pictures and knowledge!

I´m so glad those things won´t stop popping up from time to time...

couple of new pics. LMK if theres anything specific people might like to look at and I'll see what I can do... 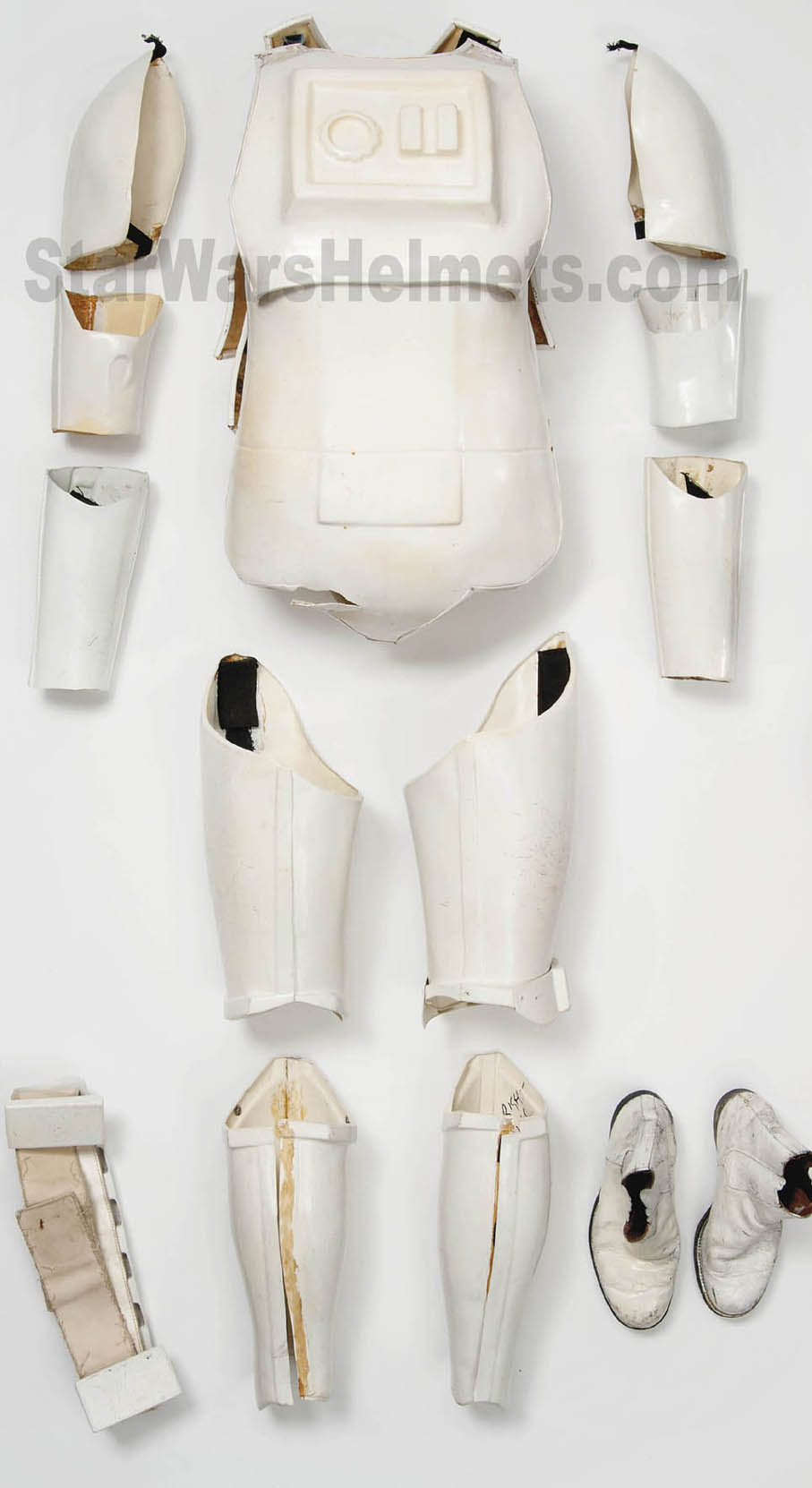 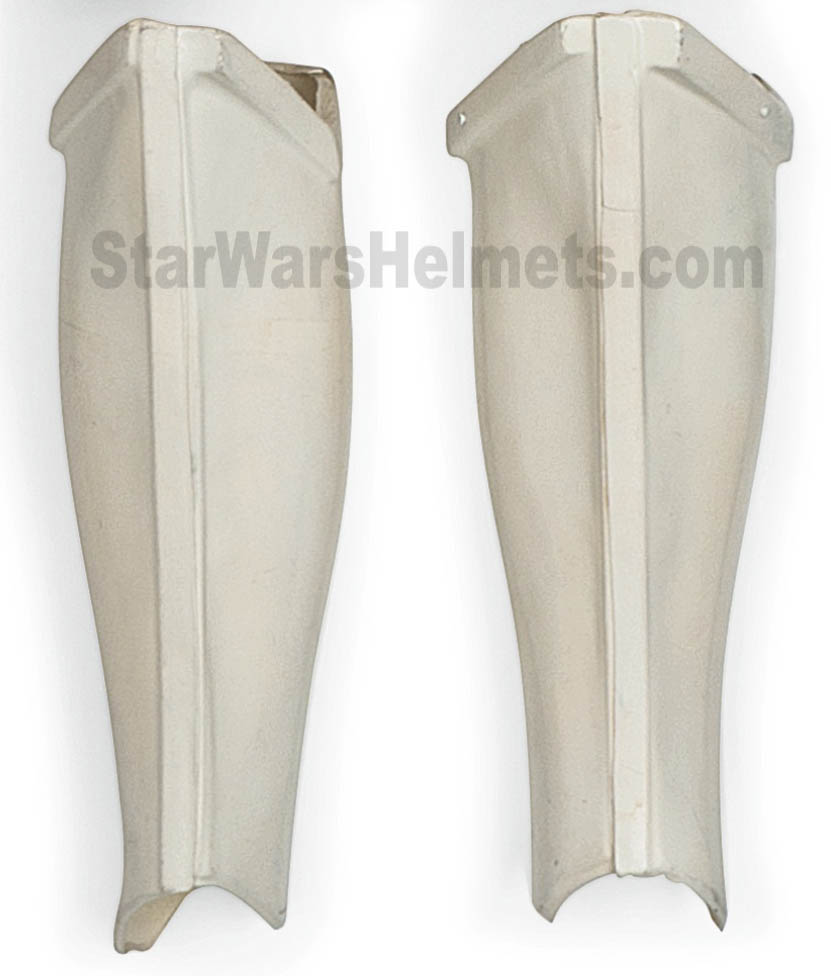 I´d love to see more detailed shots of all ANH parts outside and inside, especially the belt if possible.
Feel free to post all pictures you´ve got, Jez... :rolleyes

Community Staff
Thanks for the pics! It is very interesting to see the difference in the plastics! No matter what version of the armor it is, I can't imagine that this thing won't go for a mint!

RPF PREMIUM MEMBER
I don't think I'll ever get tired of looking at old stormtroopers! Thank you for sharing these!

Very cool! Thanks for sharing Jez!

Patched up Squib damage I think.

RPF PREMIUM MEMBER
That's what I was thinking. Also, were there more than two at this event? I can't place this one. 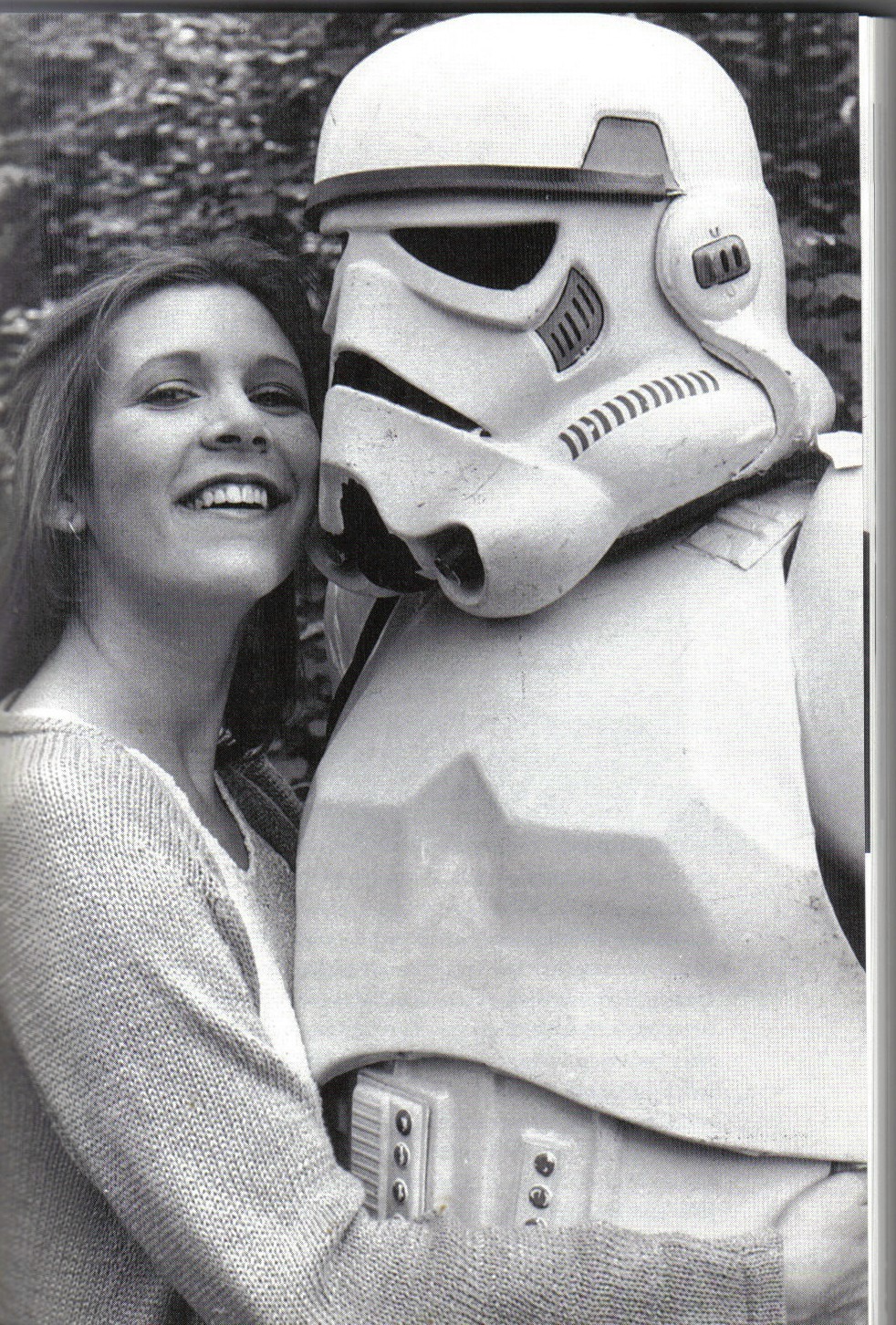 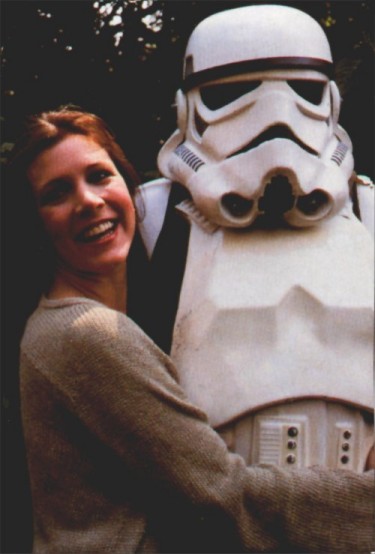 Very interesting indeed.
Thanks for sharing this with us, Jez.

Holy smokes - this is an awesome find and a very thorough and illuminating write-up.:thumbsup
S

Tremendous info and very helpful. I'm curious as to how much this goes for...

I
Roger Christian lightsaber in Profiles