Characteristics of an iconic weapon

For a movie, I am tasked to design and make the weapons. Most of the weapons are relatively standard, but the laws here in Cyprus do not allow Airsoft or metal replica's. So I am making guns that actually cycle and will spit out a casing, but all made from plastic. Like a Beretta and a Corner shot.

For the bad guy, I need to make something a little more custom. A pistol that is clearly his own. That got me thinking on the characteristics of an iconic gun.
What makes it unique or iconic? What aspects make the Blade Runner blaster the famous one, for instance?
Is it something in the design (the X factor) or is it almost entirely due to the success and popularity of the movie itself?

IF it is due to the design, I think it is a combination of a few factors:
Recognizable
Fits seamless with the character of the bad guy
Different enough from standard pistols

Anything else? Any ideas, or comments on the root cause of success?

I think a big part of it comes down to uniqueness. The snub nose gun, for example, has what I'd consider a weird shape, and two triggers adds to that factor (I've only seen the film once so this is almost an outsider's opinion). This weird shape is what, to me, makes it recognisable.

When I've been taught on designing characters or vehicles, one of the things mentioned was to make the silhouette recognisable. That is, without colours or shading, just an outline, it is very unique (think of "Who's that Pokemon?").

Another part is how the weapon would relate to the character. Although not popular, the first thought that came to mind were the pistols off Romeo + Juliet: 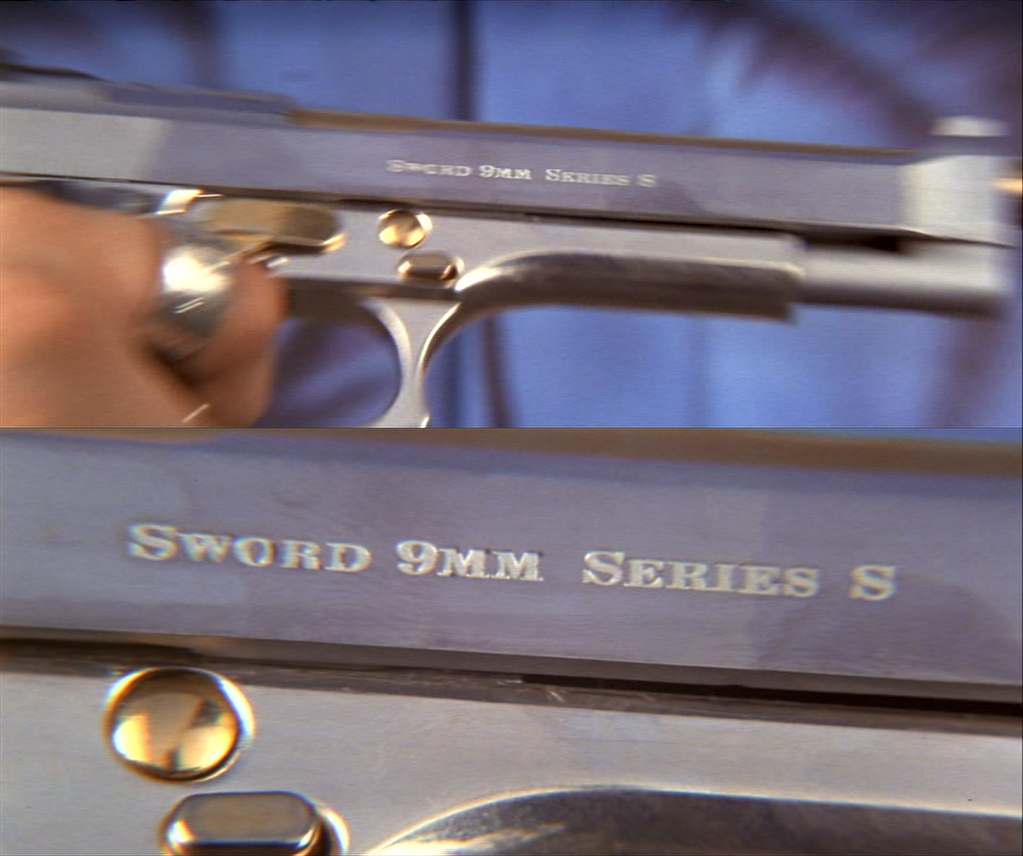 As you see, the name of the weapon/brand is called "Sword", a direct reference to how classically, the characters would use swords.

Perhaps consider engraving on the gun, or a paint scheme - a pattern that suits the style and personallity of the villain.

RPF PREMIUM MEMBER
The silhouette is a major factor for a lot of famous guns. The big thing on the Deckard blaster for me is the grips, they really set it apart from other guns.

Thanks for the suggestions, I really like the idea of designing for silhouettes, thank you for that.

This is what I am thinking at the moment. The movie is set in present day and the name of the gun is a play on the movie title.
Not sure about the red dot indicator on the back. It takes away from the overall design. Besides, it has a laser built in below the barrel. 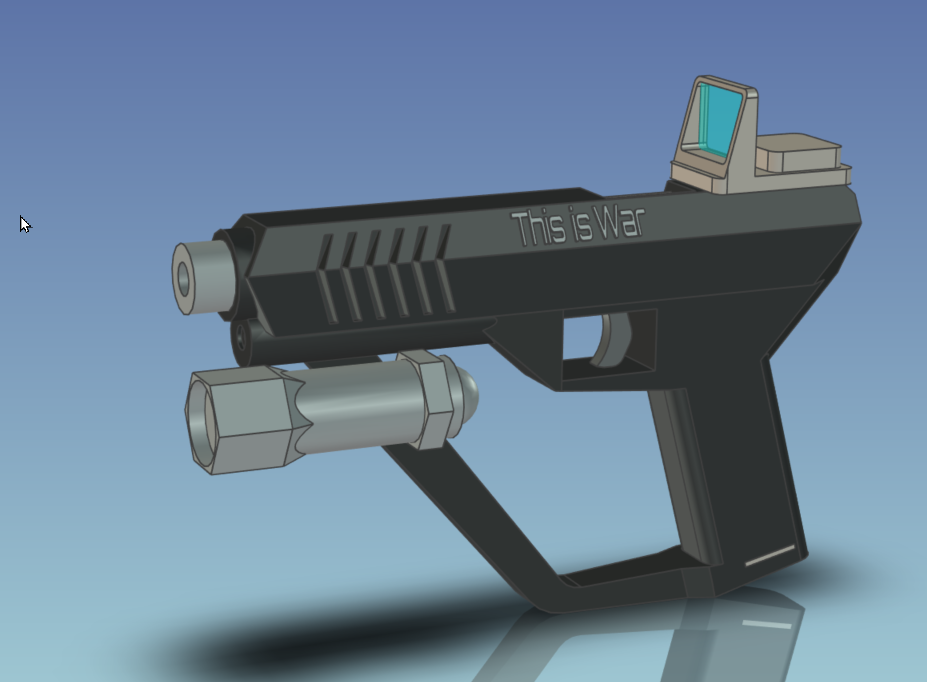 I like where you're going but I feel like this pistol is visually out of balance, if that makes any sense?

I'm curious how it'd look if you removed the underbarrel light and aligned the angles a bit. Eg. Match the angle of the trigger guard to the hand guard, and perhaps the magazine.

It's a bit better. Making the angle the same as the magazine did not work, made it way too bulky.
This works, or at least is more consistent.
I added a little bracket around the laser. 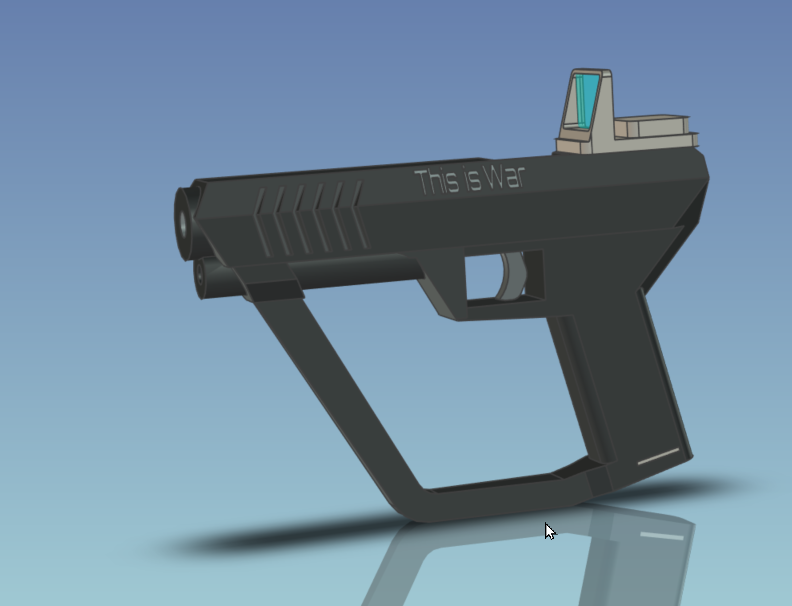 RPF PREMIUM MEMBER
TBH, if the movie is set tin the present day then what you've designed looks like a 1970s vision of a futuristic gun... IMO. Which may be what you're looking for.

Personally, I would look to a more contemporary firearm. For example, the Chiappa Rhino 60DS has a cool brutish look. Otherwise, consider looking through the imfdb for inspiration. Start with the pistol and revolver pages.

RPF PREMIUM MEMBER
I really think the character plays a big part in breathing life into the weapon. But as an avid collector of prop firearms, I would start with a "real steel" firearm design and really expand on that. I think that starting with a base in reality gives you a really good footing. Good luck!

ZeroSum said:
TBH, if the movie is set tin the present day then what you've designed looks like a 1970s vision of a futuristic gun... IMO. Which may be what you're looking for.

Personally, I would look to a more contemporary firearm. For example, the Chiappa Rhino 60DS has a cool brutish look. Otherwise, consider looking through the imfdb for inspiration. Start with the pistol and revolver pages.
Click to expand...

Ouch! But I get what you are saying. The Rhino is a good looking gun and I like the idea behind it as well.
I had designed this, similar only in the sense that it is full of holes. 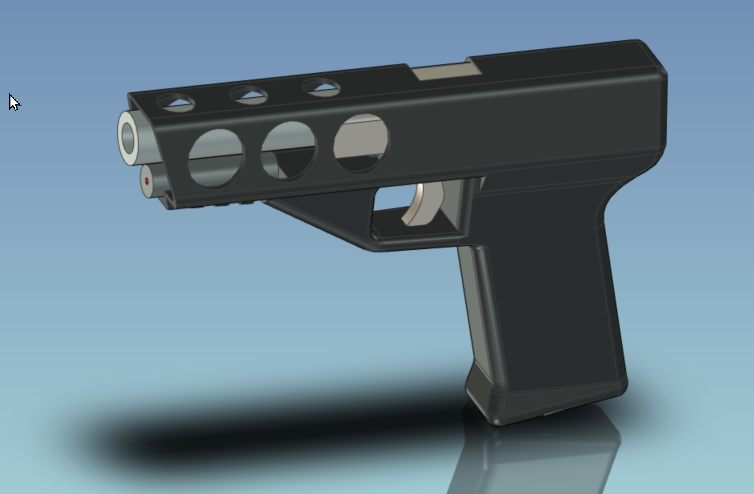 I am beginning to think that I am unconsciously constrained by the fact that it needs to be 3D printed, so I am looking for smooth surfaces, easy to prep and finish. But then, I have always been a fan of smooth slick designs.
Maybe I should try and let that go and go for something like this: File:Tuma-MTE-224.jpg - Internet Movie Firearms Database - Guns in Movies, TV and Video Games

The "An American Werewolf in London" prop thread