So, one of the things I've been tinkering with while breaking in the new resin 3d printer is making Nick Fury's pager from IW. A good friend of mine who used to design circuit boards for space probes (for real- he worked on a Mars mission and Rosetta, for example) is handling the electronics for it, hand-coding the animations and sound blipp. Will be updating here as we go along.

My very early beginning of the shell. It'll house everything and open by screws on the back. A thumb-button will most likely start it up.

Very early progress video of the electronics. (These will be swapped for smaller, more suitable versions later.)

RPF PREMIUM MEMBER
Bringing this page back up... here's the latest:

Whats going on with the blinking of the screen that seems to be timed with the LEDs being turned on/off..

I dont recall that form the movie (but its been a while to be fair).. is that on purpose? or a 'brown out' from not enough current or something?

Whats going on with the blinking of the screen that seems to be timed with the LEDs being turned on/off..

I dont recall that form the movie (but its been a while to be fair).. is that on purpose? or a 'brown out' from not enough current or something?
Click to expand...

The only thing I had on-hand was an old 12v 27A battery from my Yondu Arrow project. It's built to run on a 12v 23A, which has a little more juice... as it was the only thing with enough voltage that we could properly fit into the case. It will be packed pretty tightly as it is. (It can run off a 9v too, but there's no way to make it fit.) Might end up trying to adding a capacitor to the circuit to even out the charge if needed, but it looks fairly stable when the battery is fresh.

Trying to exactly replicate the CGI pager in the film has been a bit of a nightmare... I mean, even the pixels on the screen in the movie are 'wrong' and don't look like a real-world LCD!

RPF PREMIUM MEMBER
OK, so time for an update. I've finished the build, one of two, with the other going to another collector. Pretty happy with how it turned out and would say it's darn-near as screen accurate as is possible considering the real-world limitations of copying the CGI model. 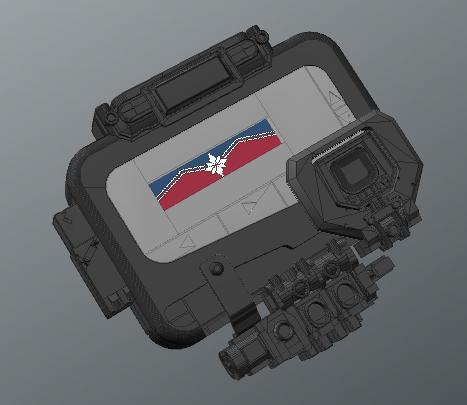 I later went back and added a couple things, like the green circuitboard in the lower left corner and the baffle-cover in front of the LED box (which is, I'm pretty sure, supposed to be a power unit).

An image from the programming interface my buddy used:

He essentially had to program the image on a per-pixel basis because the Arduino board we had to use (due to size constraints) didn't have enough memory for bitmap images. (I think the final count free memory was 2 BYTES!) The movie pager also had a technically 'incorrect' image in the screen, where some colored pixels took up HALF of a 'fake hardware' pixel on the screen. This is, of course, not technically possible in the real world and was probably the result of two images overlaid, so we had to try and simulate the look a little by drawing a darker border around certain details.

Raw printed parts (support has been removed, but nothing else done) test assembly: 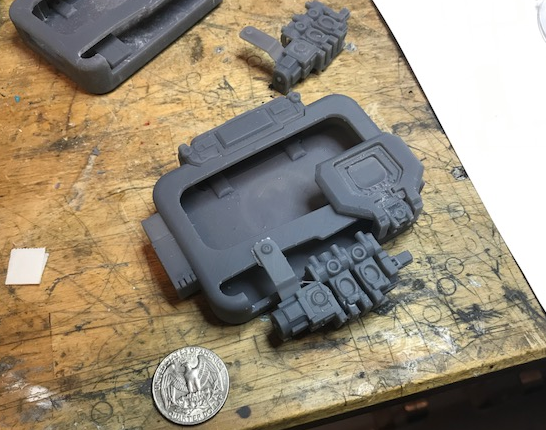 Another test assembly after some more cleanup. (Still using a dying battery, lol.) The screen was printed in clear resin, which turns milky/frosted in the curing process, so it had to be meticulously sanded and buffed until it was clear again, then hit with a couple layers of clear coat, which were then dulled down just a bit.


Here's a photo during final test assembly after some serious painting and weathering. You can see the sound buzzer in the lower right of the bottom pager. The jumble of wires and other component all have to fit inside without poking out anywhere. (I could have made them shorter, but it would make test-positioning a lot harder.) You can just barely see it in the lower pager, but the power unit has a small clear printed diffuser inside to spread the red LED light a little.

Aaaand... the final version of my pager:

The most critical part was gluing the screen in place. There was little margin for error and a worst-case failure would have meant a lot of wasted hours.

The 23A battery worked much better than the 27A and the flickering of the display is gone. (No idea yet how long the battery will last, but the constant 'blip' sound gets on your nerves after a while so it's only ever on for short periods! At the last minute, I swapped out some resistors for weaker ones to make the display a little brighter. (Letting the display work unrestrained is partly what caused the flickering effect before but I think I have an OK balance now.)

The programming allowed for a few different options- I could have set up a 'reset button' under the thumb pad to activate the sequence but in the end I opted for just an on/off switch in the back because it makes showing off the prop easier. (I can go back and add it later if I want because the function is just bypassed into a continuous loop right now, which works better for display purposes.) The battery is contained in the top piece, which is held in place by two m3 buttonhead screws.

That's it for now. Maybe I'll make a base or something for it.

RPF PREMIUM MEMBER
Building a second pager with some customized options (no sound, made to run on a display with a different power supply among other things). This thing is pretty crammed full of stuff... 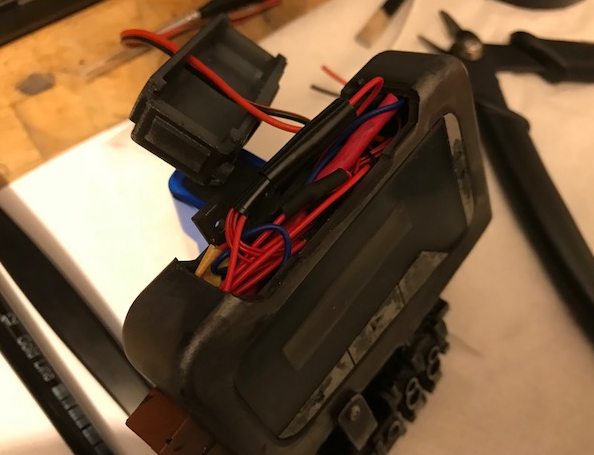 Any chance now that a 1/1 scale replica is available or reproducing the electronics? Wonder if they would fit. You did a simply wonderful job!

kevinknightnyc said:
Any chance now that a 1/1 scale replica is available or reproducing the electronics? Wonder if they would fit. You did a simply wonderful job!
Click to expand...

Thanks for the kind words. It's been so long now that I don't even know offhand if the same sources of electronics are still available. Once a project is 'done' I tend to kinda forget some of the specifics, because my head can only contain so much info, haha. (I don't even have a pager any longer! Wasn't a huge fan of Captain Marvel.)