BTTF - Back to the Future Merchandise (Toys, Models, Figures, Statues)

Hot Toys has acquired the Back to the Future license for action figures including approval from Michael J. Fox. There will also be DeLorean vehicles.

This is the best news for Back to the Future collectors .
J

Gone but not forgotten.

Hot Toys has acquired the Back to the Future license for action figures including approval from Michael J. Fox. There will also be DeLorean vehicles.

This is the best news for Back to the Future collectors .
Click to expand...

In the latest issue of Uchesan it says Doc's train maybe an exclusive for next year's character con in Japan.
V

Wow..that's another most desired collectible among many BTTF fans.

Paul, can you send me any links to that magazine site? I couldn't find anything about Uchesan on Google.jp either (except being mentioned here as Uchesan Quartely). Does the magazine mention that Hot Toys will be releasing that Doc's train model or some other company?
J

Gone but not forgotten.
It's a japanese magazine - my japanese is okay, but improving - theres no website i know of . It's an article mostly dealing with Character-con - it only mentions Hot Toys discussing the Batmobile - the train is literally one sentence - no pics - darn it! This issue of Uchesan has an insert (called "toy coming at you") - wherethey focus on Character Con and the exclusives this year - rememberthe train exclusive is only a rumor for now - but it does fit HT's m.o.
Last edited: May 13, 2012
V

Cool..thanks for the details.
E

Yup, posted about it in the HT thread...

Sorry didn't notice that. Still wondering whether it is okay to have a separate thread just to discuss BTTF figures from Hot Toys, just like we had for Mattel. If not, then I guess Mods can merge this thread.
E

Honestly, I didn't really care... I just wanted the chance to "Fyfe" someone!

It is really cool that they got the license, I'm not sure if I will pick any up, but I am excited to see them.
V

Eopie Herder said:
I just wanted the chance to "Fyfe" someone!
Click to expand...

Heavy Future: Factory Entertainment to release Back to the Future Shakems

Factory Entertainment has acquired the Back to the Future license and they will be rolling out some cool BTTF products in 2013. Starting off with their Shakems line, which are similar to bobbleheads as in mini statues with spring action. The first four BTTF Shakems are as follows. 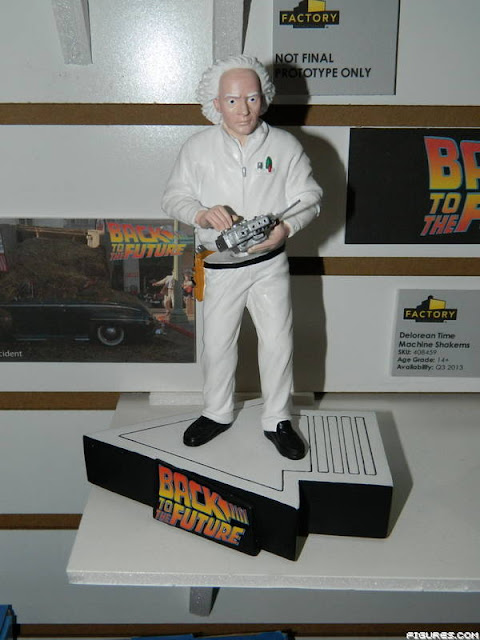 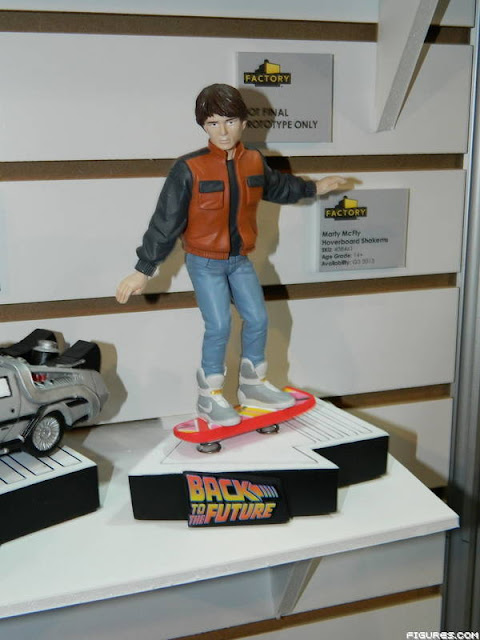 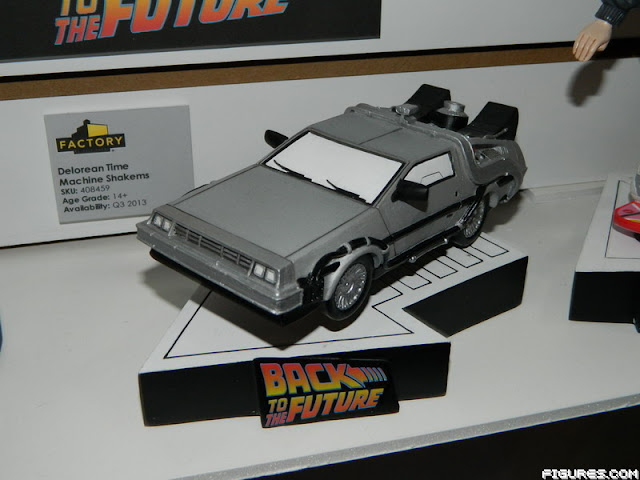 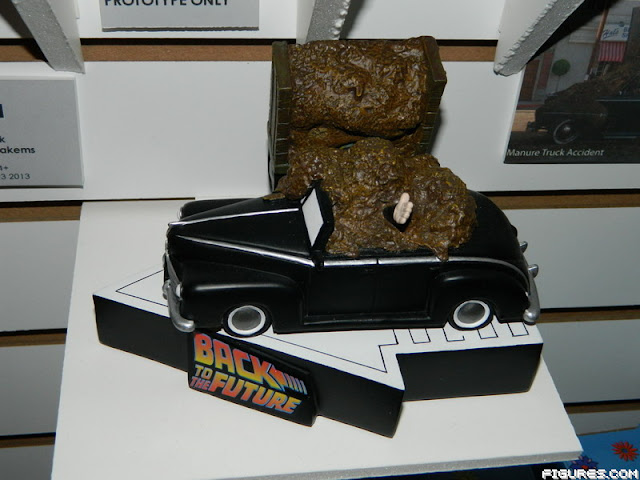 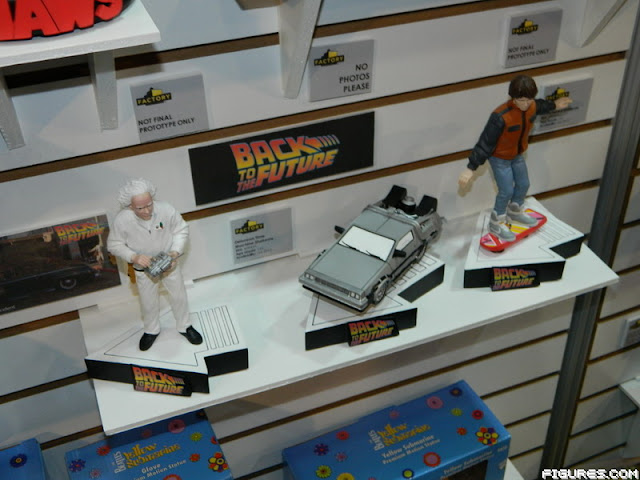 These are prototypes and are still in approval stages. Yes, there are no actor likeness on these products and due to the bobblehead type nature of these products, they appear to be more cartoonized versions of the characters. Still the sculpts looks good and costume details are captured quite nicely, but Marty's face needs to be more expressive. Also Doc's costume needs the orange markings and his shoes could use the brown color touch up. Overall it's refreshing to see a company releasing BTTF products beyond DeLorean models. I love the DeLorean Time Machine and I'm looking forward to Hot Wheels releasing their Elite BTTF DeLorean Models in 1:43 and 1:18 scale later this year.

But I also want to see more characters from the BTTF universe being released in the figure and statue format. These Shakems from Factory Entertainment is a good start towards that. And I have to say, that Biff's car filled with manure display is just brilliant. This is what I want to see, a company doing the unconventional and really embracing their acquired licenses. It's great to see that memorable and hilarious moment from the film being captured in a sculpture format like that. More movie scene specific sculptures please.

Mattel acquired the BTTF action figure license along with actor likeness rights back in 2011 and then backed out from producing the figures. Hot Toys has acquired the BTTF license along with likeness rights, though I am not sure if we will see any figures in 2013. From what I discussed with Factory Entertainment, they seem very passionate about the BTTF franchise and I think they will do the BTTF line justice. Also FE makes movie prop replicas, so maybe down the line we can finally have a company doing accurate BTTF prop replicas.

Last month I got the Universal Monsters - Frankenstein Limited Edition VFX Bust from Factory Entertainment. And it's a gorgeous piece of art. I can only hope FE manages to get actor likeness rights and releases more similar BTTF character products in the future.

Along with Back to the Future, Factory Entertainment is releasing products from Jaws, Jurassic Park, Ghostbusters, Shawn of the Dead and others. Thanks to Figures.com and Action Figure Times for all the photo coverage.

http://www.therpf.com/f12/toys-action-figures-models-collectibles-176104/
I have shared pics of the other Shakems in the above thread.

RPF PREMIUM MEMBER
Is it me or does making a Marty Mcfly "SHAKEM" seem a little politically incorrect? I wonder if they are donating any of the proceeds to Parkinsons research?


Plus, who wants a toy of Biff covered in manure? Who would put that on their shelf? Seriously, can't anyone make decent BTTF props or toys?? Is this franchise cursed or something?
V

Jedifyfe said:
Is it me or does making a Marty Mcfly "SHAKEM" seem a little politically incorrect? I wonder if they are donating any of the proceeds to Parkinsons research?
Click to expand...

Right, but I didn't even realize that until you mentioned it. But they have been using that word much before they got the BTTF license. They had released the MIB Shakems in early 2012.


Jedifyfe said:
Plus, who wants a toy of Biff covered in manure? Who would put that on their shelf? Seriously, can't anyone make decent BTTF props or toys?? Is this franchise cursed or something?
Click to expand...

I am definitely buying it and some others might buy it too. (Though Ultimate BTTF Collectible is stretching it for catchy title). But I understand why some may be put off by it. I still think it's a cool obscure product. I am having high hopes for FE, this is just the start. As I mentioned above, there is potential for more better BTTF products, be it figures, statues, busts or prop replicas from FE.
Last edited: Feb 12, 2013

Vivek said:
I am definitely buying it and some others might buy it too.
Click to expand...

Jedifyfe said:
Well, at least 2 of these will be sold...
Click to expand...

Why don't we make that 4 lol
V

Jedifyfe said:
Well, at least 2 of these will be sold...
Click to expand...

Ha..:lol, oh boy I am hoping it will appeal to more.

It's a recurring funny theme from the trilogy which is being immortalized in miniature form like a diorama. And I think it's a breath of fresh air in the area of BTTF merchandise. Yes, I do understand the irony in my choice of words .

And I think the main reason why the manure car looks bad to some could be cause of the appearance of the manure itself. It's more slimy than what was show in the movie. It was outright dry and powdered vegetable particles in the movie. But see, I am literally discussing **** here. And not many would want to display that and have a conversation about it :lol.

RPF PREMIUM MEMBER
Thisis why I like you Vivek, you can always see the bright side of things in BTTF...LOL
V


Jedifyfe said:
Thisis why I like you Vivek, you can always see the bright side of things in BTTF...LOL
Click to expand...

As long as they are not BTTF prop replicas from DST and Mattel .

^^
THAT's a pretty good idea. I will try to reproduce that movie scene with the 1/18 scale Ford Convertible model from my collection. I'm really excited to see how difficult it is to make realistic manure.

shouldnt you have red seats in that ?

Yes, I should, but you will not see any more seats under the "manure", when it's finished. :lol

Major announcement: MEGO is coming back! - TARGET will distribute!
2