But I can not find that info anywhere

Does anyone have any reference material on this?

In the original series all the Vipers had the same markings. There were no registration numbers or pilot names used. Even the Mk 1s from Pegasus looked identical to the ones from Galactica. What kinds of markings were you thinking about? 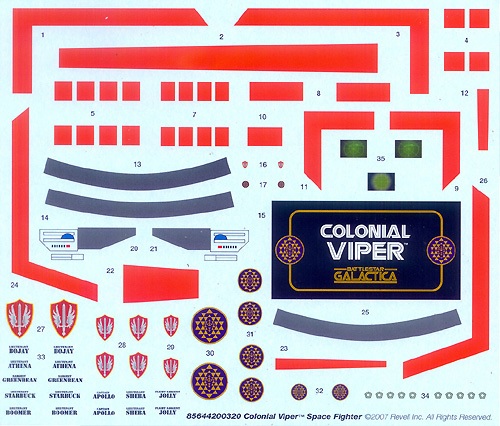 To the best of my knowledge, in the original BSG, none of the Vipers had any sort of markings to distinguish one from another. This was probably done deliberately since it would allow them to reuse footage as well as use the same model or models repeatedly to represent any pilot they want.

The Revell decals are conjectural as the filming models had no unit markings. However the round black markings are copied from the Galactica pilots' uniform patches, the red shields are Silver Spar squadron from Pegasus.

Here are some pictures below some screen grab from the show and others are of the Colonial Viper built to 1:1 scale for up close scenes. Hope this helps as reference take care.

robn1 said:
The Revell decals are conjectural as the filming models had no unit markings. However the round black markings are copied from the Galactica pilots' uniform patches, the red shields are Silver Spar squadron from Pegasus.
Click to expand...

The full size mock-up had the Silver Spar markings on the fuselage, but the Galactica vipers had none. 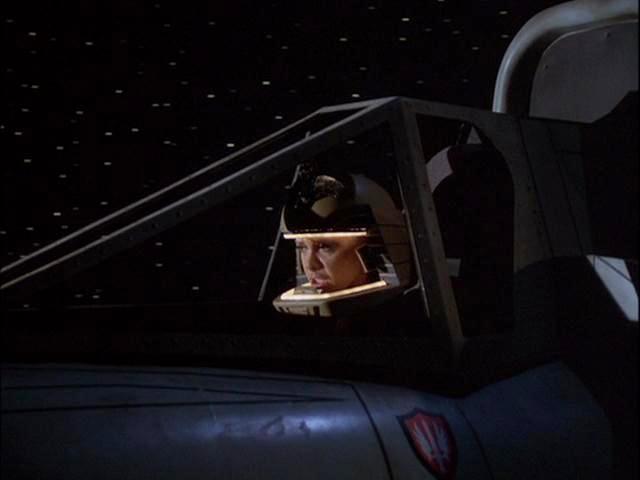 Lol that upper intake behind the canopy is blanked off.

Guns Akimbo said:
Lol that upper intake behind the canopy is blanked off.
Click to expand...

Someone on the ground crew is going to be in deep doodoo!

edge10 said:
The full size mock-up had the Silver Spar markings on the fuselage, but the Galactica vipers had none.

The marking shown is far smaller than the similar decal in the Monogram/Revell kit.
Click to expand...

holtaa said:
I guess it proves what most have said all along.... there is absolutely no need for an intake in the vacuum of space.
Click to expand...

The Vipers were also atmospheric as well.
H

holtaa said:
Golly gee, really, thanks.... I had no idea.

My post was intended to expand on Edge10's joke that the ground crew left the FOD cover in the intake as an explanation for the blanked of intake by implying that the ground crew didn't remove the cover as it isn't necessary due to the fact that the scene was a flight entirely in the vacuum of space. You see, in the vacuum of space there is neither sufficient quantities of any specific gas to act as an oxidizer for the propellant fuel, nor resistance to forward movement thus requiring the removal of the cover.


Just in case you missed it, Edge10's joke was meant to explain why the full sized cockpit used in the filming of the close-up scenes with an actor has a blanking plate in the intake. Essentially a set, not an actually air or space worthy craft, the construction crew put a piece of wood, sheet metal or fiberglass just inside the intake to aid in the illusion of a real spacecraft. Through a poorly framed camera angle, the plate is visible to the viewer, essentially ruining the illusion.


I felt I needed to add the explanation, as it seems that subtlety was ineffective. If you need a map, let me know and I'll post one.

Wow, I guess I can be a condescending know-it-all too.
Click to expand...

Wow, I mean just wow !!! I must have totally missed Edge10's intent with his post. So Godsdamned glad you were here to point out my supposed failing. Space being all airless and such, I guess that is why astronauts need those suits huh?

Being as it was a photograph taken on a set of a fictional show and would not have been seen on the episode, I guess it really doesn't matter what any of us think. The Viper was designed and built the way it was with absolutely zero thought or worry for or about future generations dissecting and extrapolating every single tiny nuance of what they were doing.

Thanks for coming out and playing.

edge10 said:
The full size mock-up had the Silver Spar markings on the fuselage, but the Galactica vipers had none.
Click to expand...

I'm going to have to go back and rewatch the series. I had forgotten about the Silver Spar markings.

R
Anyone own the Eaglemoss Battlestar Galactica Viper Mark I? Are these colors accurate?