RPF PREMIUM MEMBER
Has anyone found any leads on Boba's new armor? I know the hard parts are all largely the same (albeit with a new coat of paint), but the black fabric Temuera is wearing is brand new to me. Any thoughts?

Following. I too want to build this look but it’s so hard to tell the fabric, boots and gloves.
We need to find better reference photos and hopefully I can figure out what type of fabric it is.
S 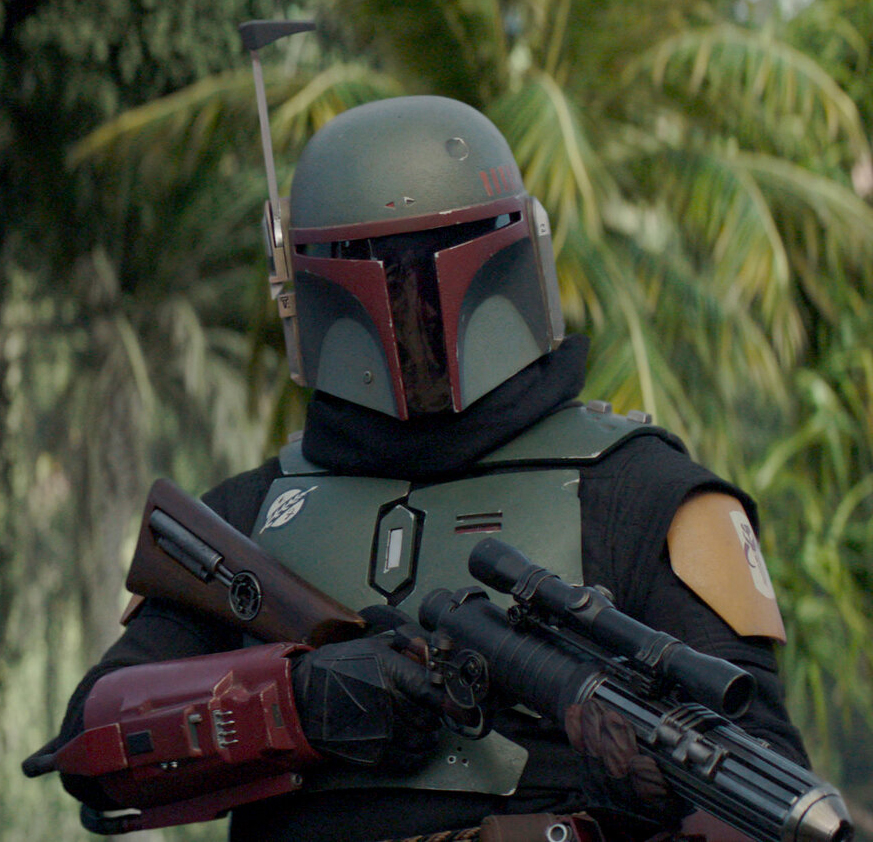 The gloves are mando's, the yellow fingers are now brown and the handplates are black.

These appear to be his boots, it was listed over at the dented helmet
(Boba 2020 boots).
He is also wearing some black waders or riding gaiters over top that I have yet to find.

RPF PREMIUM MEMBER
The sleeves look almost like the traditional Mando flight suit with the cuffed upper arm. You can faintly see the stitching and in some better pictures you can make out the pattern. The flak jacket is black and has flared out shoulder padding instead of straps that hang over the armor plates. Maybe just a more padded or quilted material. I want to figure out the bottoms. There are pants that are almost like long shorts then the skirt/surrong wrapped around. I just picked up these boots. They are the same as mrfrankieman pointed out but the lower slip on version and plus they have a slightly more OG Mando look 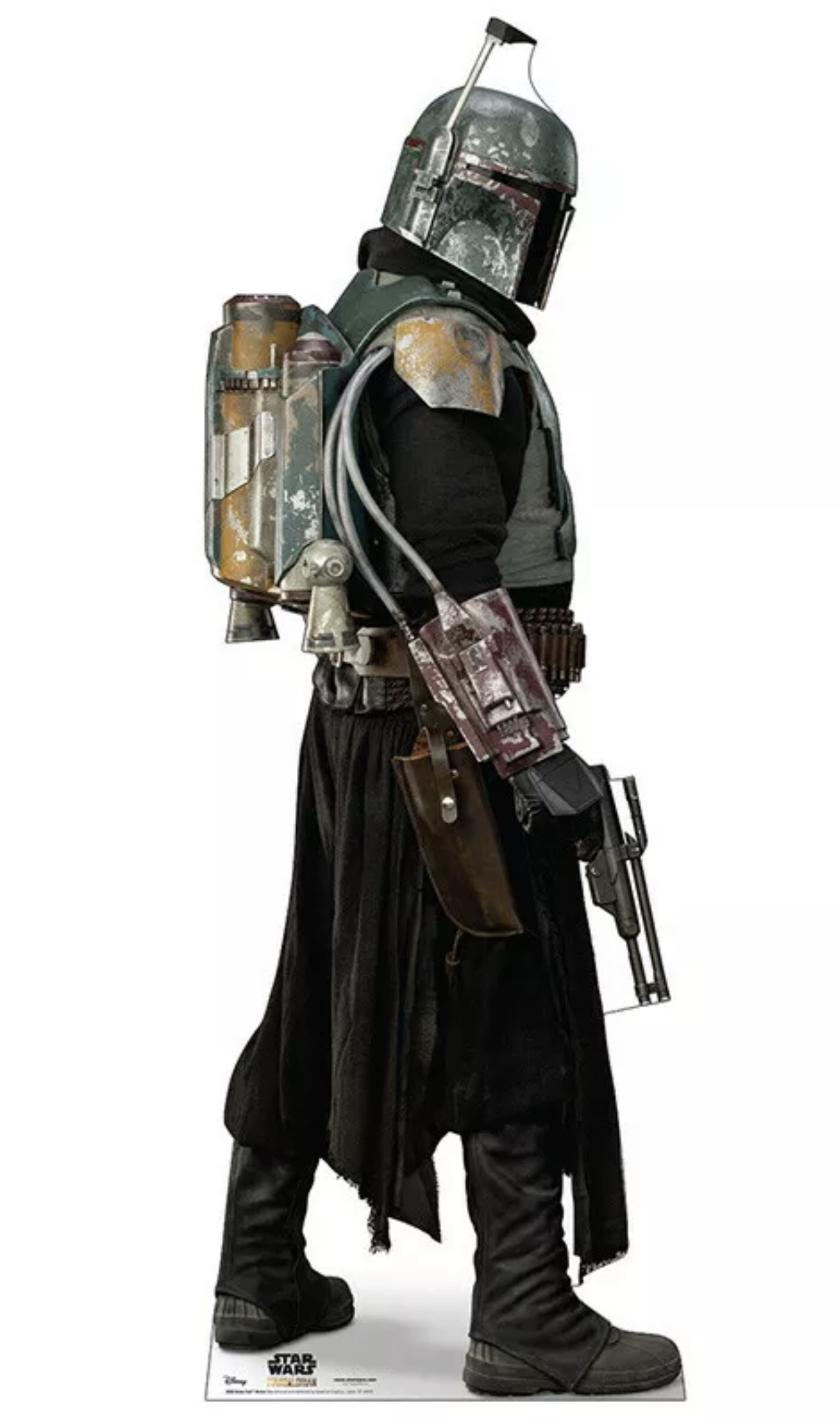 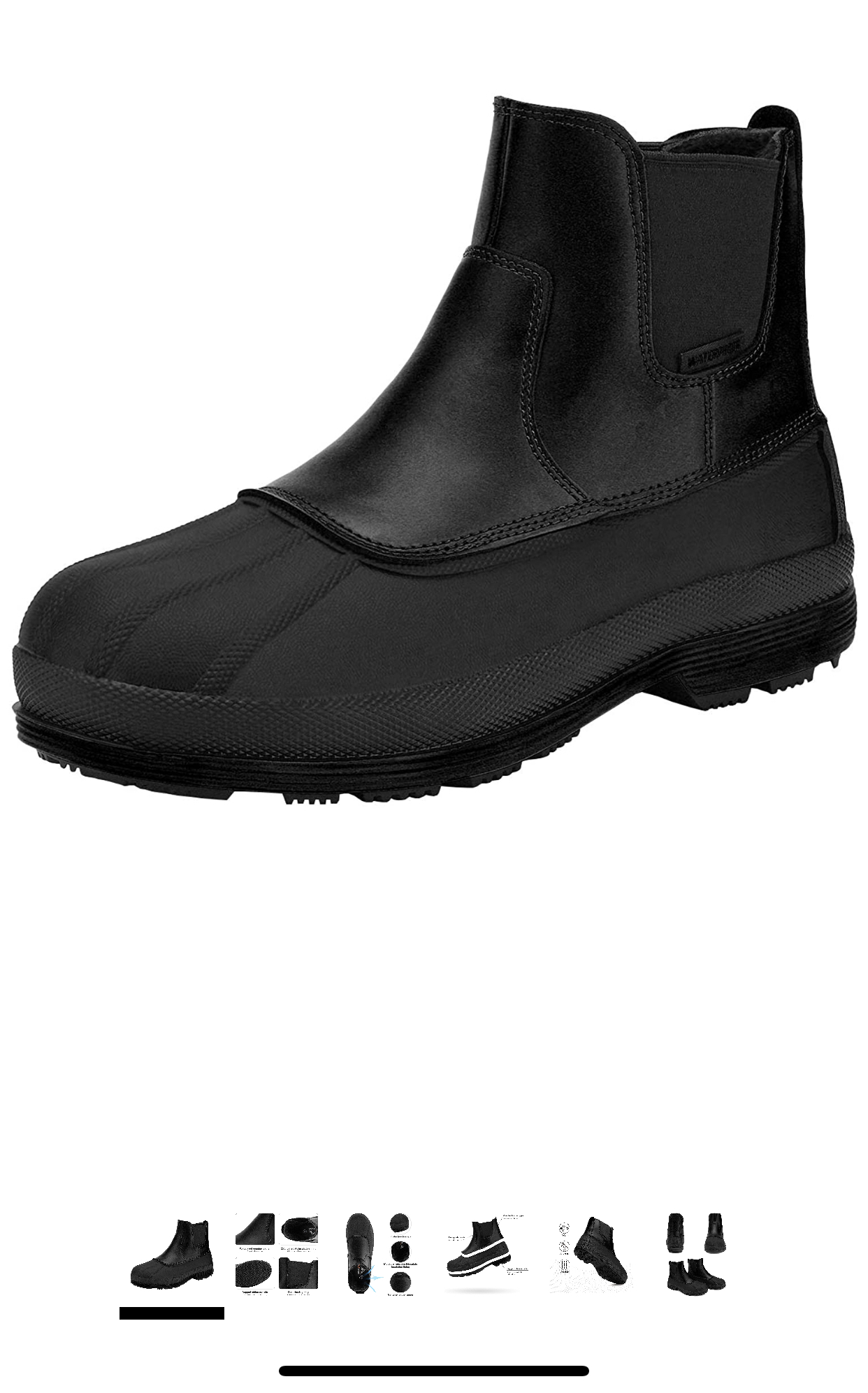 RPF PREMIUM MEMBER
I just ordered a pair to compare them with the zip up version, but I think you're right. The gaiters he wears aren't bulging in the same way you would expect with the bulkier ankle on the model I shared.

His pants give me this sort of vibe, but not quite. BITLIVE Mens Boho Hippie Baggy Cotton Harem Pants with Pockets (Black) at Amazon Men’s Clothing store

The pants are a custom piece made by the costume designer based on a traditional Hakama pattern. It's still difficult to see what is going on, but some of the behind the scenes footage from the Gallery episode helps. There is a sash under the rope belt that may actually be the top of the pants folded over.

The first layer above the waist is a long sleeved shirt with a cowl neck attached. On top of that is a vest that is another custom piece, similar to the grey one Cobb Vanth wears but different (may be the same pattern as the stitching appears to be the same, but the sleeves differ), and both are unlike the OT flak vest. The mid-bicep sleeve MAY actually be part of the vest rather than the long sleeved shirt.

There is a lot of confusion because the stunt costumes do differ some from the hero costumes but may have been used in some hero shots and closeups. It's also not clear if the under clothes in The Tragedy are the same as The Believer and The Rescue. There are definitely also several continuity errors made through the final two episodes that also make it tricky (belts switched, jetpack switched, even the beat up helmet on the stunt guy when Koska flips him onto the ground).

There seems to be very little based on the original trilogy costume as the designer definitely did her own concepts. Morrison also apparently had some influence on the costume as far as traditional Maori clothing (most notably the rope belt).
S

Belt Confusion! Okay, so in the episode The Tragedy, when Boba first takes back his armour from the Razor Crest and battles the Stormtroopers he clearly has a 'bullet' belt over the 'rope belt', however at the start of the following episode, The Believer, when Mayfeld mistakes him for Mando (and he's in his re-armoured look), this looks like it has been replaced by a belt with a buckle in the centre and two pouches on either side. No big deal so far as upgrades, right! However a little later when Mando tells him to punch in the co-ordinates to Morak and he's at the controls of Slave 1, he seems to have (for no apparent reason) donned the 'bullet' belt again, only for it to revert back to the buckle/puches combo when he shows them the scan of the planet, and when they recon the base itself. When all the shooting starts towards the end of the mission and Fennec tells him to start his run it's still the buckle/pouches, but a short time later when he informs everyone to hang on as the TIE fighters pursue, it seems to have switched back to the bullet belt again!?! For the extent of the following episode, The Rescue, it appears to only be the buckle/pouch combination shown, in both his fight with Koska, and at Jabbas Palace at the end, which I'm assuming is the 'correct' version, and putting the issues of the differences in The Believer down to bad continuity (Which admittedly had me confused for a while)
Still need to identify the top with the cuffed shoulders too.

ob1korobi said:
The sleeves look almost like the traditional Mando flight suit with the cuffed upper arm. You can faintly see the stitching and in some better pictures you can make out the pattern. The flak jacket is black and has flared out shoulder padding instead of straps that hang over the armor plates. Maybe just a more padded or quilted material. I want to figure out the bottoms. There are pants that are almost like long shorts then the skirt/surrong wrapped around. I just picked up these boots. They are the same as mrfrankieman pointed out but the lower slip on version and plus they have a slightly more OG Mando look View attachment 1408410 View attachment 1408411
Click to expand...

Is there a link on where this version of the boots can be purchased? Thanks.
Last edited: Mar 26, 2021

SIITKD said:
Is there a link on where this version of the boots can be purchased? Thanks.
Click to expand...

The Nortiv 8 was the one I purchased
S

ob1korobi said:
The Nortiv 8 was the one I purchased
Click to expand...

Struggle to get the zipped Nortiv 8s in the UK at a reasonable price, let alone the pull on ones at all unfortunately.
J

This looks like a pair of hakama with the pleats ironed out and tucked into the gaitors. Then the legs from a 2nd pair of hakama were attached front and back. . Then it was sewn to the waistband (front and back ) the hakama pants worn underneath. Neo Roman/Japanese gladitor skirt look

Super simple to make, especially if you just buy two pairs of hakama and disable the 2nd pair and use one of the legs of the hanging piece on the right side. The Hot Toys figure makes it more obvious with the bright lighting on the model. 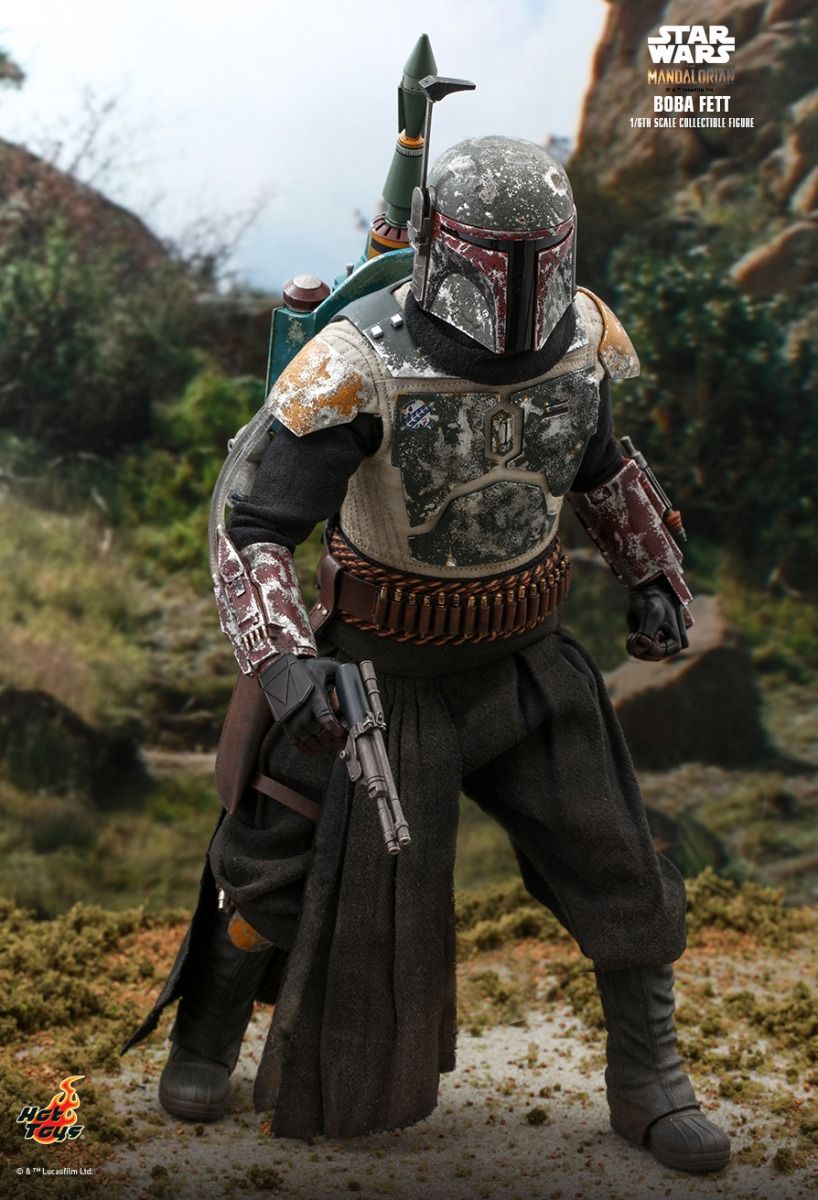 This Boba costume also reminds me a bit of the classic Japanese construction worked pants as well, 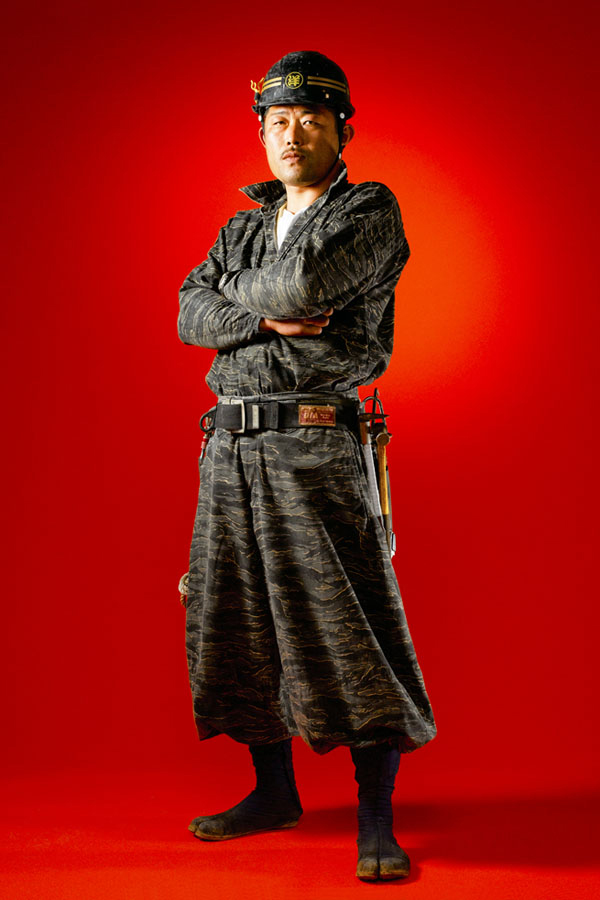 I'd be careful using action figures for reference.
They tend to get details wrong.
S

division 6 said:
I'd be careful using action figures for reference.
They tend to get details wrong.
Click to expand...

Even the shows themselves sometimes dont get their own continuity right!
J

division 6 said:
I'd be careful using action figures for reference.
They tend to get details wrong.
Click to expand...

I agree. Although if you compare it to the photos from the show its pretty darn close. I've seen these Boba Fett pants on Etsy and the design is pretty spot on although the fabric is completely incorrect. Either using cotton or light weight linen. Gotta be medium to heavy weight linen to drap correctly and see the fabric texture.
Last edited: Jul 26, 2021
J

This angle is a bit better in showing off the piece that drapes in the front, kinda like an off center pleated loin cloth. I have to say as much as I like the original Boba Fett costume, I find this one far more interesting and intriguing. I love the cobbled together look, suggesting Fett traveled around after climbing outta the sarlacc pit. It also fits his body type since he is an older person that has put on some weight over the years whose body wouldn't be complimented by the original tighter fitting costume. Also more options for cosplayers. Can choose the robed Boba carrying the gaffi sticks, the rearmored weathered armor look or the refurbished armor look. 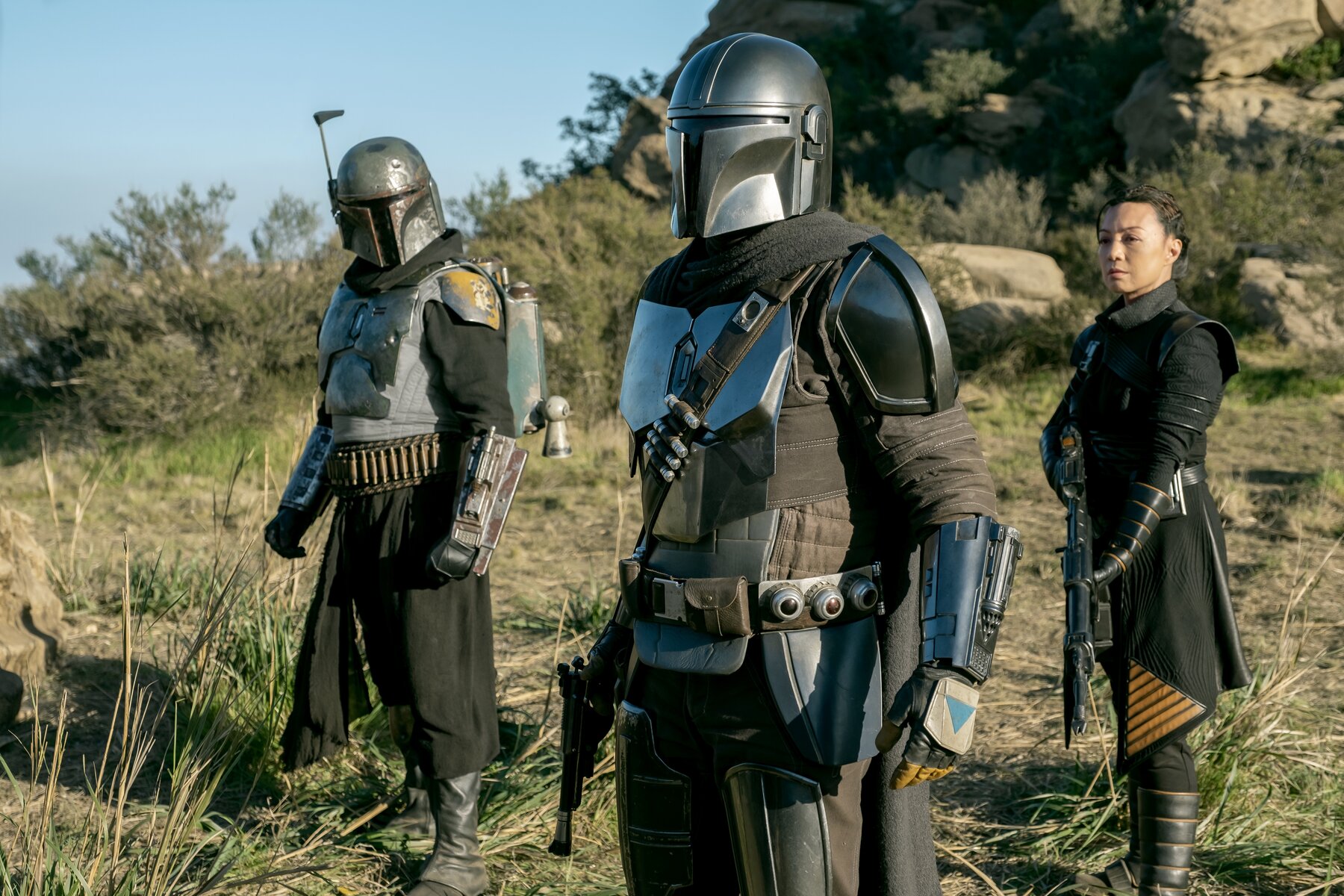