Just saw this on the FB page. Made me sad for all the people that use all CGI. Such awesome work!

RPF PREMIUM MEMBER
Have you seen this yet? You definitely need to contact him...it would be amazing to match your visuals with his sound.

i will have to say it has been quite awhile since i was inspired to work thru the night after looking at someone ELSE'S work... but i got jazzed looking at the car construction pics. I am creating the BR world in 1/6 scale, and have spent 4 years researching the different sets i need to build. This was FANTASTIC!!!!!

juno said:
Just saw this on the FB page. Made me sad for all the people that use all CGI. Such awesome work!
Click to expand...

I agree with you Juno. There's no school like old school.

Hey, I am REALLY happy that you like our "little" project!!!
Stay tuned for production diary No.2 - very soon!

And Bendzhamin, where can we see your project?

these are the links to the threads i have at PropSummit

We finished the car segment, which is approximately 1/3 of the film. It took us 8 days for about 50 shots which turned out to be 6 min of film.
Next thing we'll film is a "toilet set", and then miniatures. I hope in 2-3 months we'll film it all and then it will be time for post production.

Anyway here's some updates from the past few days.. We all got sick at some point. :lol Our DP almost fainted one morning and we had to wait for a couple of hours for him to recuperate, our actor got a mild food poisoning, and I was working with fever for two days. Nevertheless, everything ended well.

Today we filmed our last shot, and it was great. The actor ate noodles in the car, and we built the illusion of a parking lot outside the car only with miniatures. It was so fun. Here's a photo where I'm setting it up: 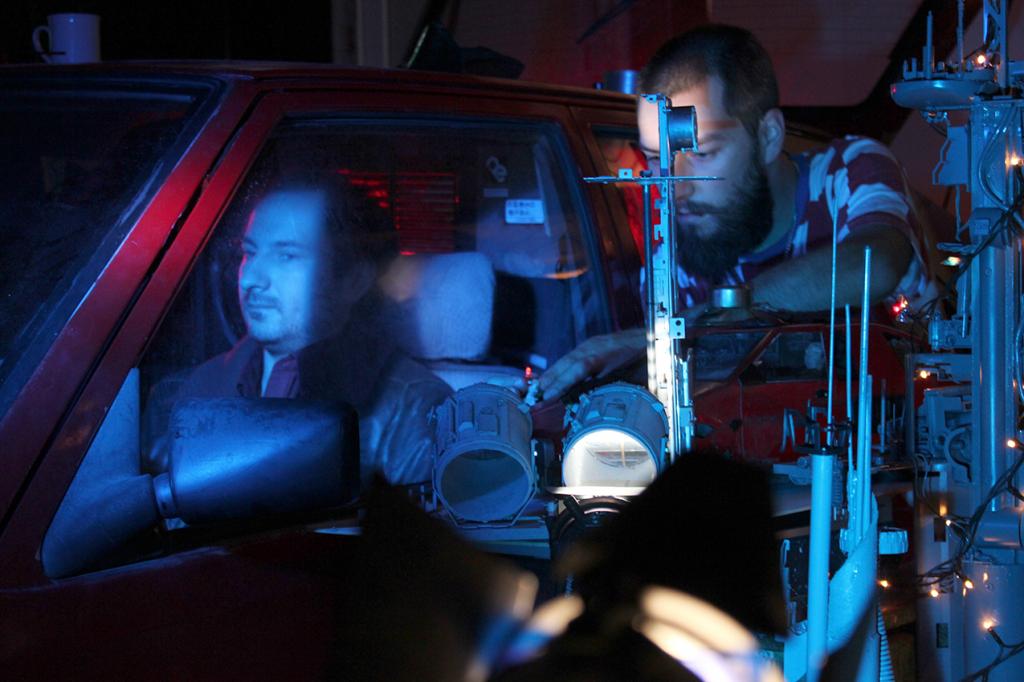 For the parked car we used the same model car that our actor is supposed to sit in (!) because it's the only one we had, but it's out of focus so you can't tell. It's incredible how the model car is only 15cm away from the window and the illusion works. You'll see the shot in the video!

For the noodle eating shot I made chopsticks and my friend drew The White Dragon logo on them (it won't be seen in the film I think, but a nice addition for my collection):

I like this short documentary video forms so I made another production diary, and here it is for your viewing pleasure:


After the last shot we returned the car to it's catastrophic original condition (apart from the red paint) and now it sits in my driveway awaiting the towing service and it's sad destiny at the car crusher.
We debated weather or not we feel nostalgic about the car. Sure, it stinks, its full of ants, and if you sit in it you immediately feel disgusting, but we had good fun with it, and I'm glad it will at least live in our film. 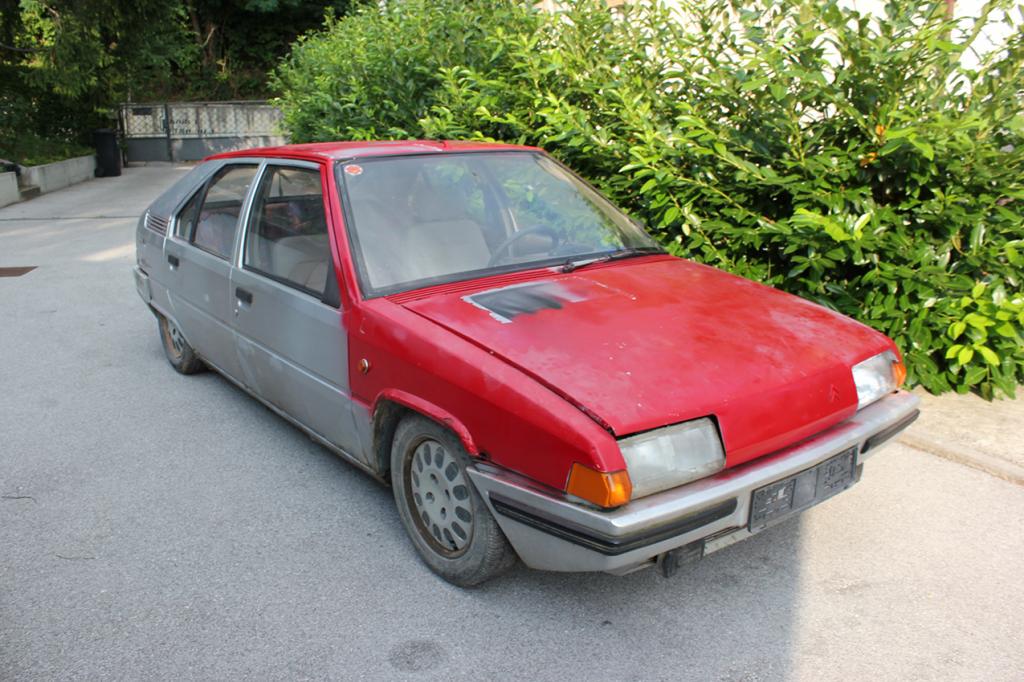 That'll be it from me for the next few days. I'm going to the sea to relax after this torture:lol, and you can expect the story to continue at the beginning of next month.

Oh, btw. Bendzhamin, I know your great threads!!! I stumbled upon them a hundred times before, I just didn't connect them with your name. I especially love your 3D analysis of Deckard's apartment. I would really like to see it built in miniature! Don't give up!

RPF PREMIUM MEMBER
I can't wait until next month!

I can't believe you had to make your own chopsticks... They look great, by the way. You're going to have to use them for the DVD menus or something.

Im loving this project and the Production Diary.
Keep it up, man!

This is way beyond all kinds of awesome. Cannot wait to see the finished film

Thanks for the kind words... and HELL no am i ever giving up... it is much longer than expected but it is a hobby so there is no time limit... your work is amazing!!!
https://www.youtube.com/watch?v=rS-V7XCexjk

Excellent vid & behind-the-scene stuff! (and the beards look good on you guys also) Eager to see the whole thing put together.
Ben, thanks for the frame by frame animation...looks good!

Just stumbled on this linked from the propsummit site and I have to say WOW! I'm late to the party but just WOW...really love the dedication and the obvious love for this project and goes to show that with commitment, belief and passion you don;t need millions of dollars to make something look great! of course it helps...haha...but.

Also my father used to have that exact car in the late 80's and I always thought it looked liked Deckards Sedan even then!

Hi everybody!!!
Thank you all A LOT for your comments!!!
Ben, I did some stop-mo during my time at academy.. Man that was time consuming and hard. :facepalmI know all the problems that come with it, so I admire your will and patience! Keep up the good work!

Well, I'm back from the holidays, but I spent my off time wisely. Most of the time I was reading through threads at Propsummit. What a page, I found so much cool stuff!

Now that the car segment is done it's time to prepare for the next one: "The toilet". One third of the film takes place in an abandoned toilet, where another character is introduced - "The cop". Our friendly drug dealer and the cop cross paths, and things get interesting.
So - I need a cop costume. Naturally, the first thing I thought of were police men from Blade Runner. I went over to Propsummit and found everything I could about them. Wonderful guys over there dug up so much stuff a long time ago, so I basically just stole their knowledge. :lol

This is one of the cops:

I searched throughout the web, and contacted some people, and I ordered some of the parts of the costume. I'm still waiting for some info on sinisalo armor vac-pulls, and nobody still replied about the force and police 995 badges. I might end up making them myself.

I always kinda thought our cop should be some kind of highway patrol/motorcycle policeman. And who would have guessed: 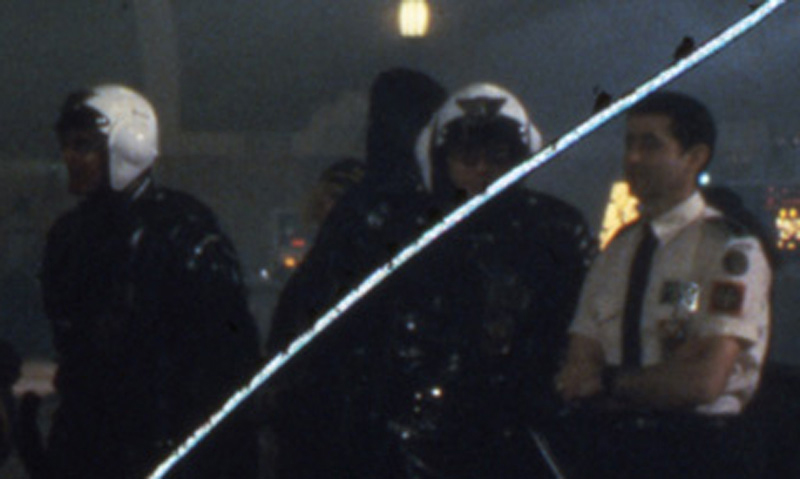 There are some in Blade Runner! This is a behind the scenes photo, they don't even appear in the film! That's really obscure stuff!
I learned their helmets are ww2 M-5 flak helmets painted white. Those are brutally expensive these days.
I had some old motorbike helmet at home so I figured it could be a good base: 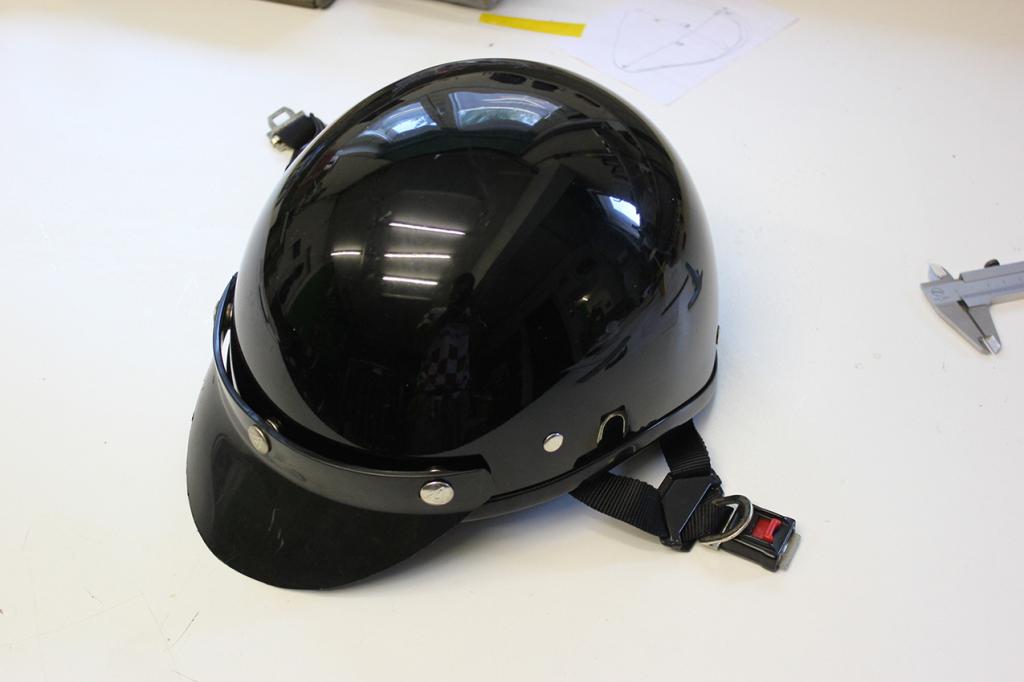 I took it apart, sanded it and primed it: 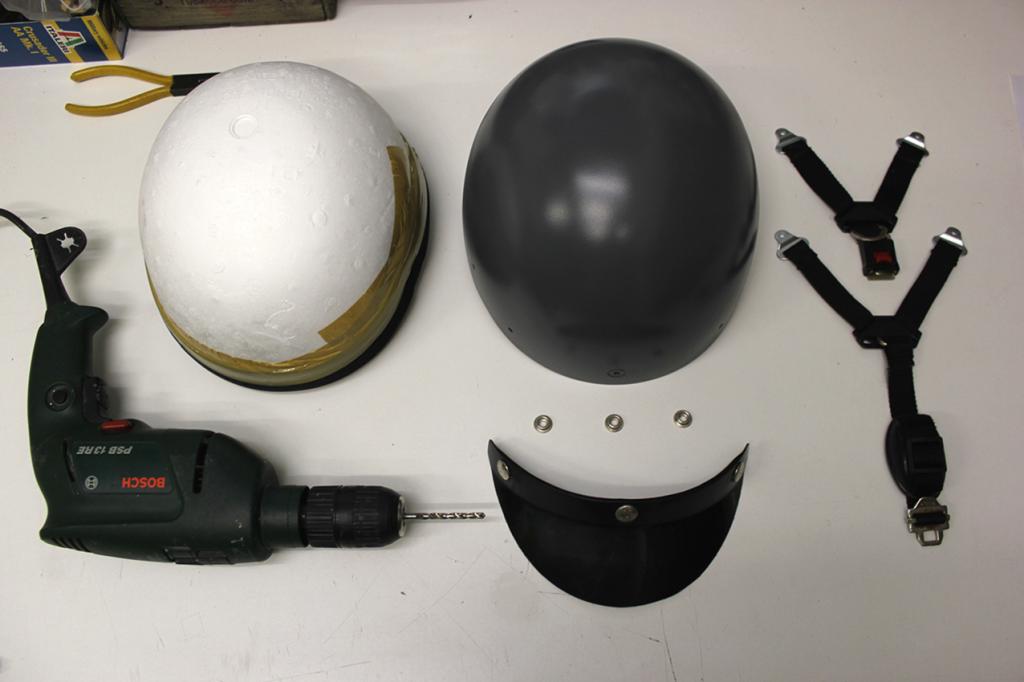 I made a clay positive of the ear flaps: 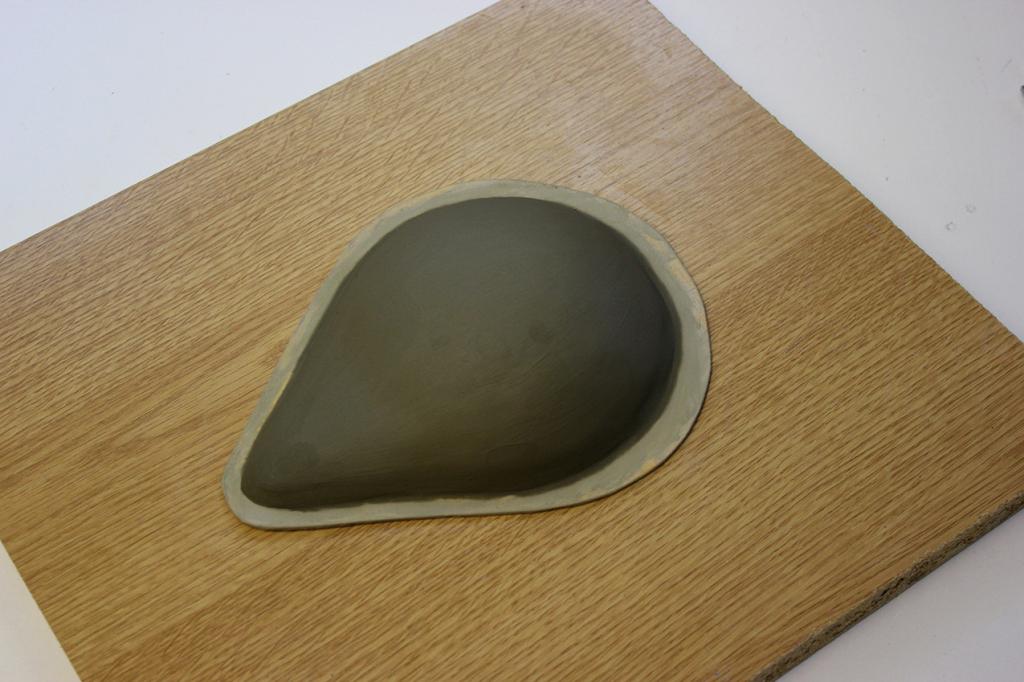 This is probably a job that would be best done with vacuum forming, but I never built myself a vacformer.. One day maybe. I decided I'll make a silicone mold and then fiberglass the two positives. I must say that it's really hard and expensive to buy silicone here in Croatia. I have an option to order it by mail, but that is way out of my budget. So what I use is a plain caulking silicone (for sealing windows): 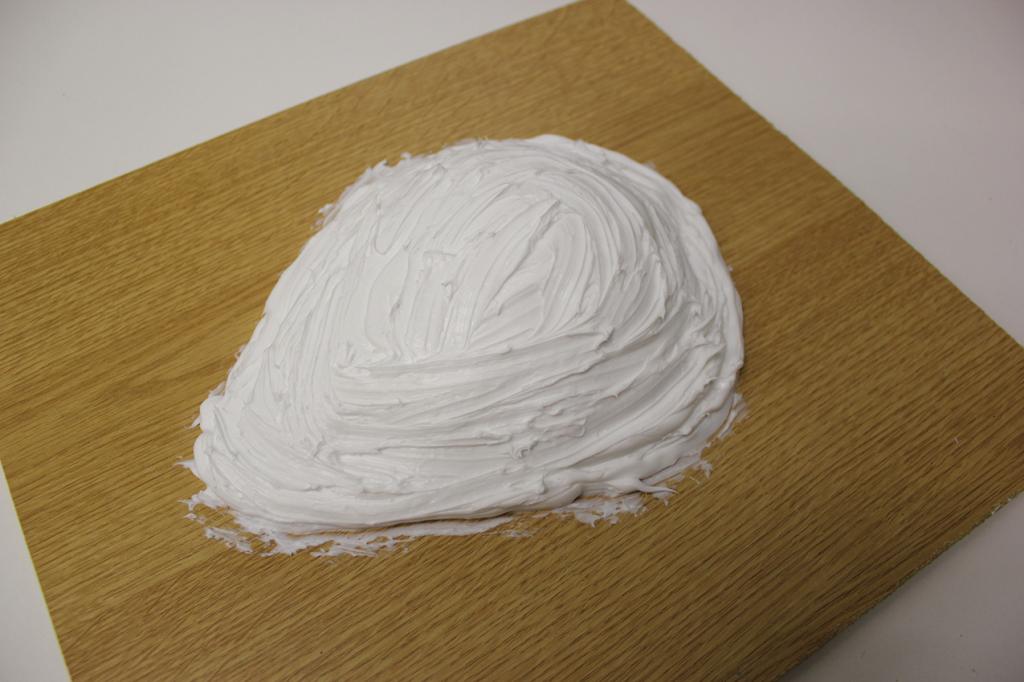 Look, I'll be honest. It sucks most of the time. I'll definitely have to sand the hell out of fiberglass positives. But for around 5$ I can't complain, right?
The main problem is that it's too thick. I did try to thin it with a hundred different solvents with no success. I found out that people use "Naphta", but I found nothing similar here.

Well ok, it's drying now and we'll see how it turned out tomorrow.
It's good to be back!

I'm sure you must have seen this at Propsummit, but here is what the badges look like.

Love your sick sense of humour LukaFilm! Eager to see what you'll produce next with that cop outfit.

RPF PREMIUM MEMBER
This is such a cool project, I can't wait to see it done! Thanks for sharing the behind the scenes, it really shows off the hard work and dedication you guys are putting into this.