RPF PREMIUM MEMBER
22 years ago I put together a custom Mandalorian costume that was inspired by the white Boba Fett of Ralph McQuarrie's concept paintings and Joe Johnston's concept sketches. I used a Mark Bradley armor kit and a Don Post helmet. 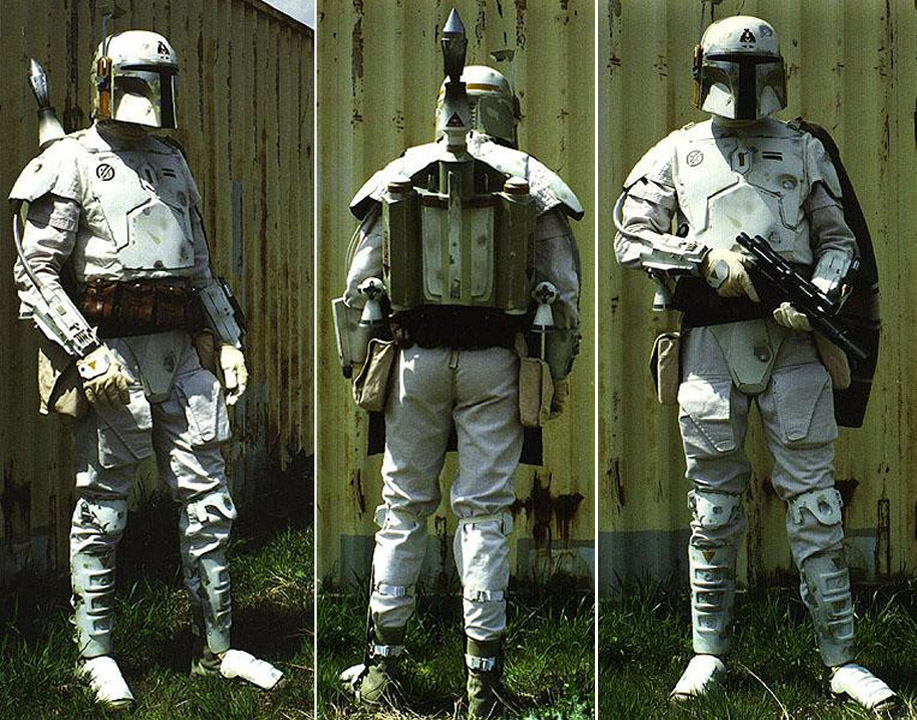 A pic of that helmet has been my avatar here on the RPF for all these years since then.

Cut to this Spring, when Scott D mentioned that he was planning to rework a Rubie's Fett helmet that he'd had for a while, and was drawing a bit of inspiration from mine. I in turn was inspired by Scott, and decided to revisit my old helmet and do an "update/upgrade" after having gotten one of Hasbro's Black Series helmets, which I was impressed by (plus, Amazon had them marked down one day, and with free Prime shipping it was a no-brainer).

This time around I had the advantage of using the pre-existing paint chipping/damage, so after completely disassembling the helmet I set about masking off that damage...

The process that I used was to lay a strip of clear packing tape down on an area that I wanted to mask - I rubbed it down really well and then traced around the shape with an ultra fine point Sharpie: 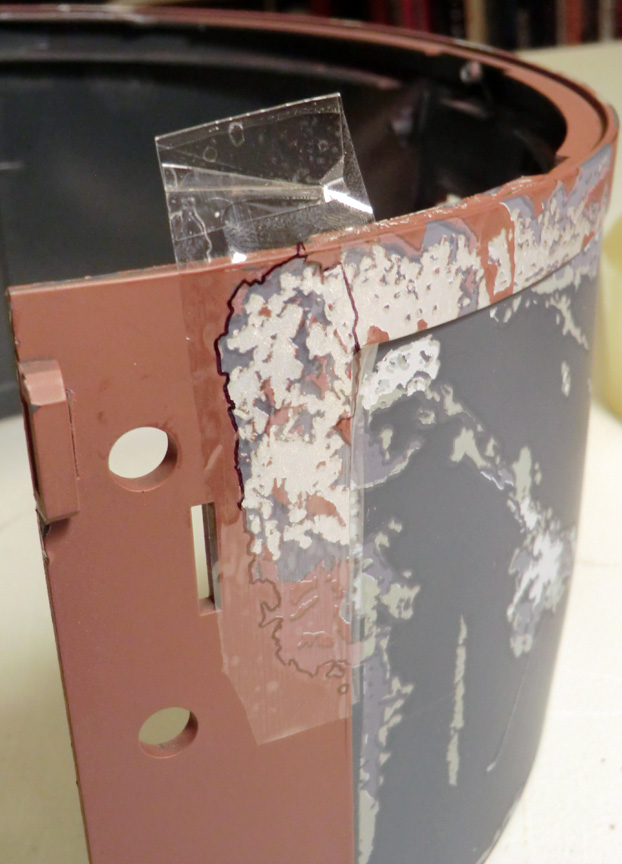 I wasn't super-fussy about getting every little micro contour - 90% of the shape was good enough. If the area to mask off was particularly large, I'd break it down into "chunks" to trace - that way the final cut piece of masking tape wouldn't be too big to handle easily and get stuck down in the proper orientation.

Then I would lay a strip of blue painter's masking tape down on a sheet of styrene (the styrene is easy to peel the tape off of). I then peeled the packing tape off of the helmet and rubbed it down on top of the strip of masking tape: 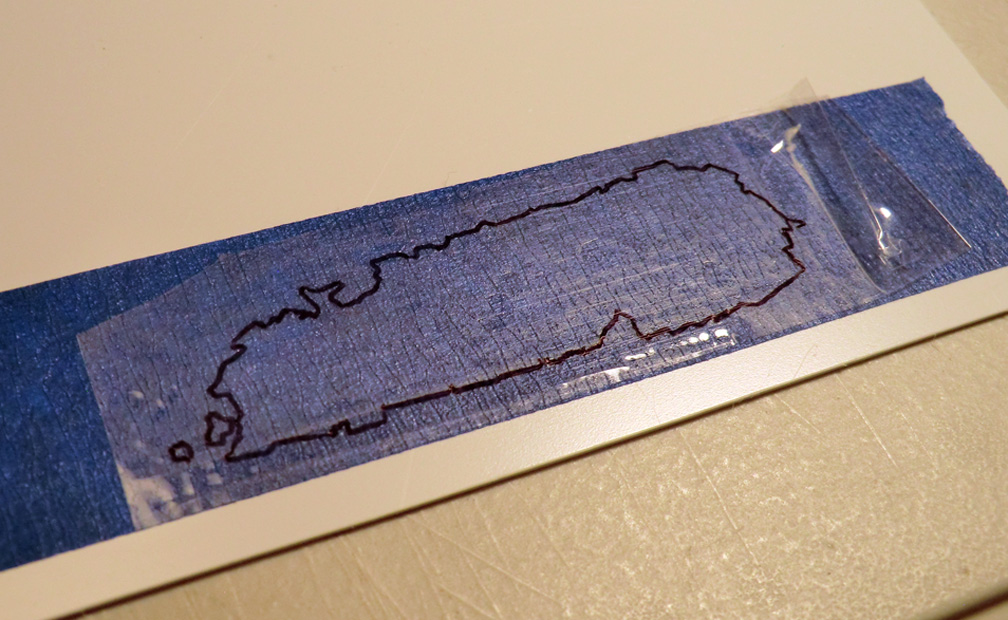 Then I'd cut along the Sharpie lines with an X-acto knife. Again, I wasn't too worried about trying to exactly match every little contour and divot - stuff that small gets kinda' tricky with an X-acto. After I cut all the way around, I peeled away the excess and then peeled the packing tape layer off of my final masking tape shape: 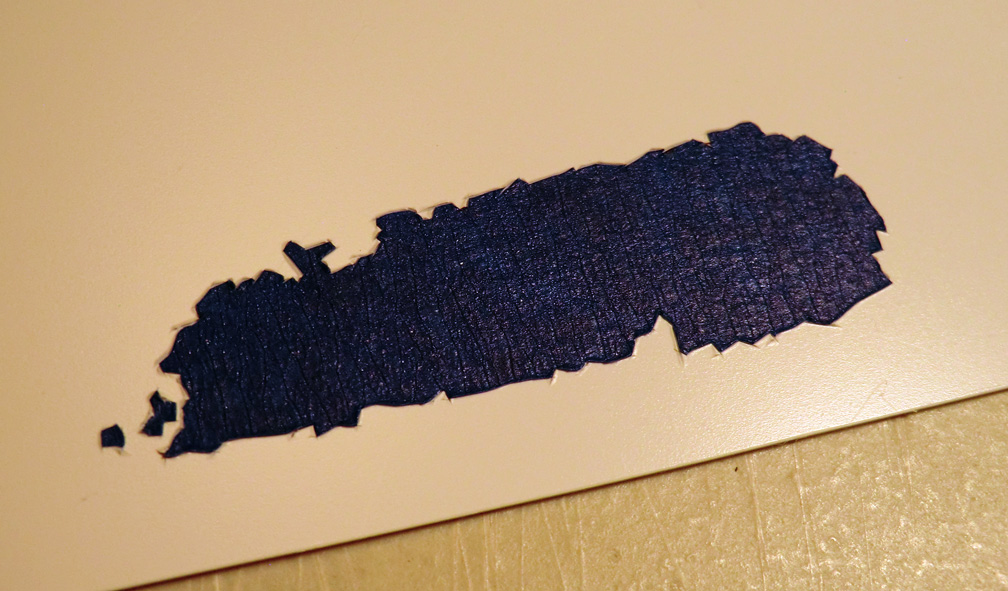 Then using the tip of the X-acto blade, I'd carefully pull up an edge of the tape and then slowly are carefully peel the whole thing off of the styrene. Then it was just a matter of lining an edge up with the chipping on the helmet and slowly laying it down. Sometimes I'd have to peel it back up to reposition it slightly, but once I had it where it needed to be, I'd first lightly press it down all around the perimeter to make sure that it was registered properly, and then press it down more firmly all over to make sure that it was completely down: 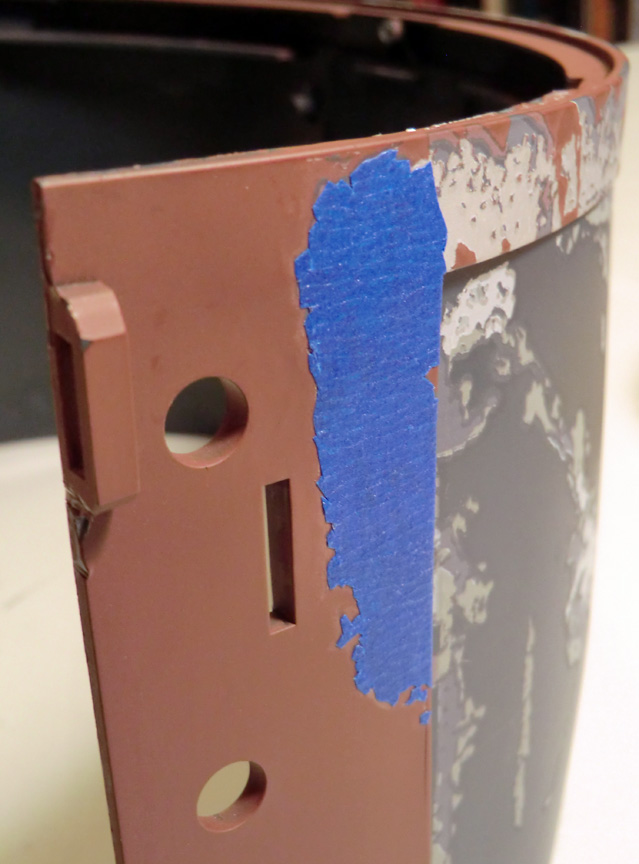 Then I'd move on to the next "chunk" and repeat the process until all of the areas that I wanted to mask were covered: 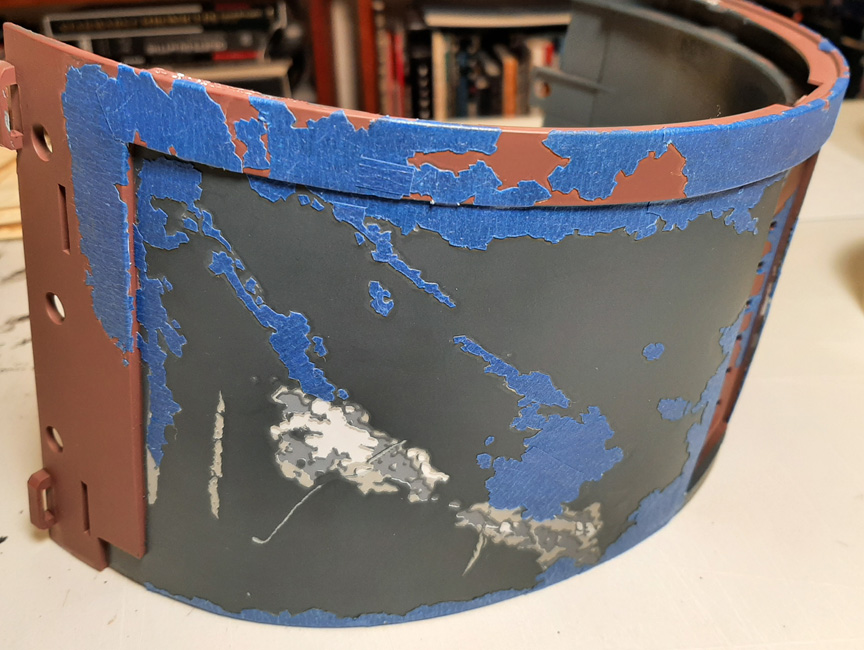 Here you can see that I skipped some areas. The process became rather tedious after a while, and I wasn't too concerned about being super slavish to the original - this was a custom after all. Plus, with all the areas of chipping, it just seemed too "busy." That became painfully obvious when I did the dome first. I actually ended up re-doing the dome, and eliminated about a third of the areas of chipping.

All of the paints that I used were rattle can colors - primarily Krylon Fusion, with one can of Rust-Oleum, and one can of Montana Colors, which I lightly oversprayed with a Design Master color and then a Design Master transparent tint. After the base colors were done I did a dirt/scorching/spatter pass in some areas with airbrushed Tamiya acrylics. Then those areas got spritzed with a spray bottle of 99% isopropyl alcohol - the alcohol dissolves the Tamiya a bit and breaks it up, giving it a blotchy pattern. A couple final steps were some scuffing with a piece of Scotchbrite pad and 80 grit sandpaper (lightly) and then hitting all of the edges with an extra fine point silver Sharpie paint marker - plus adding a few scratches here and there while I was at it. 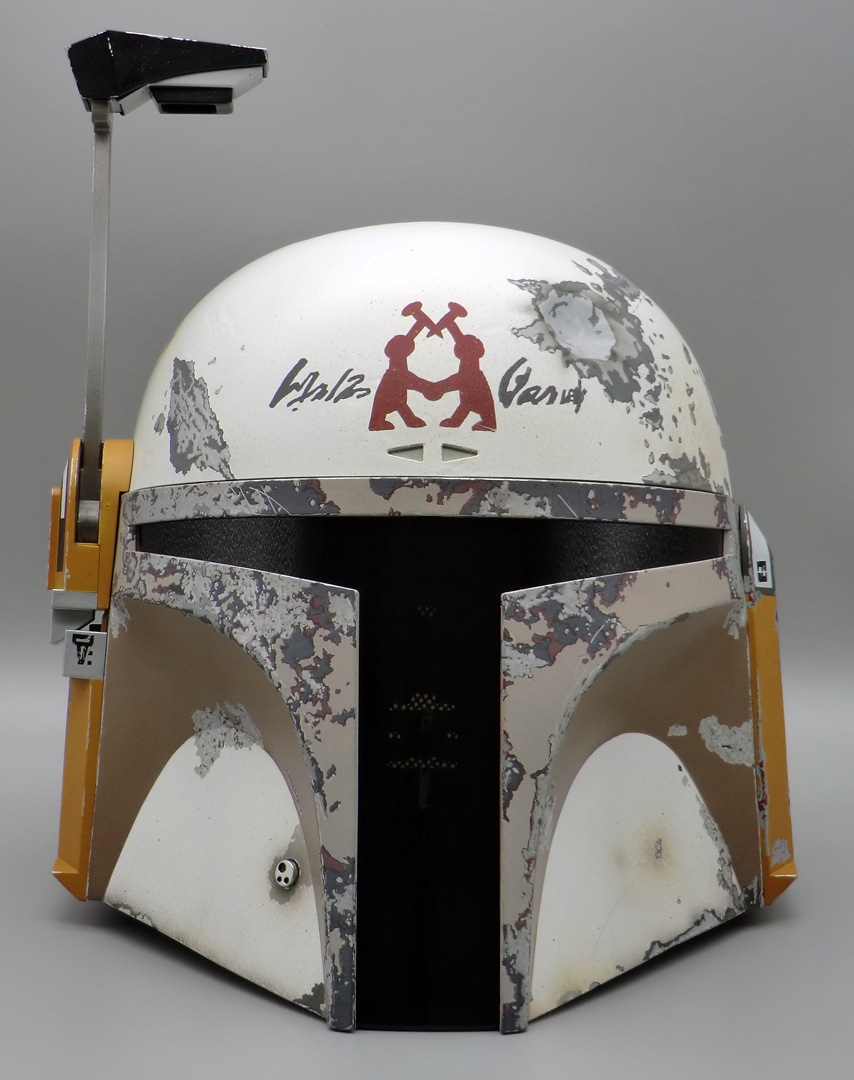 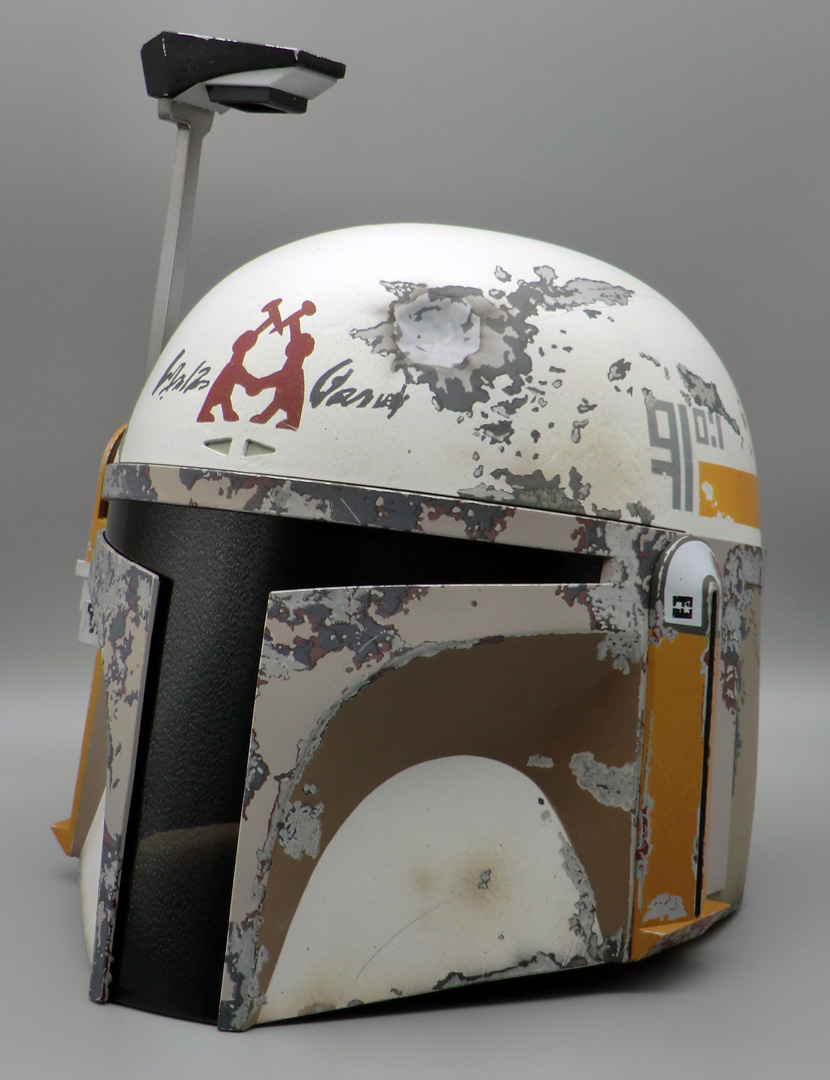 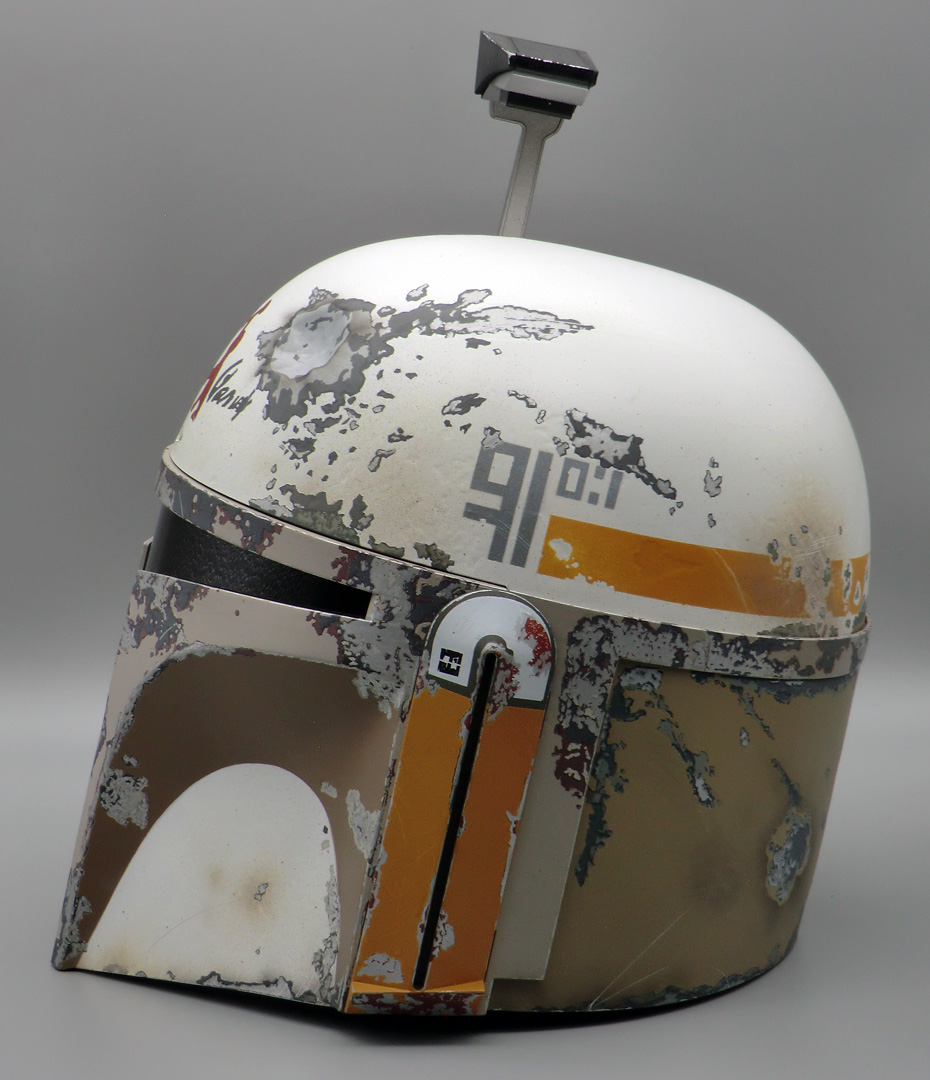 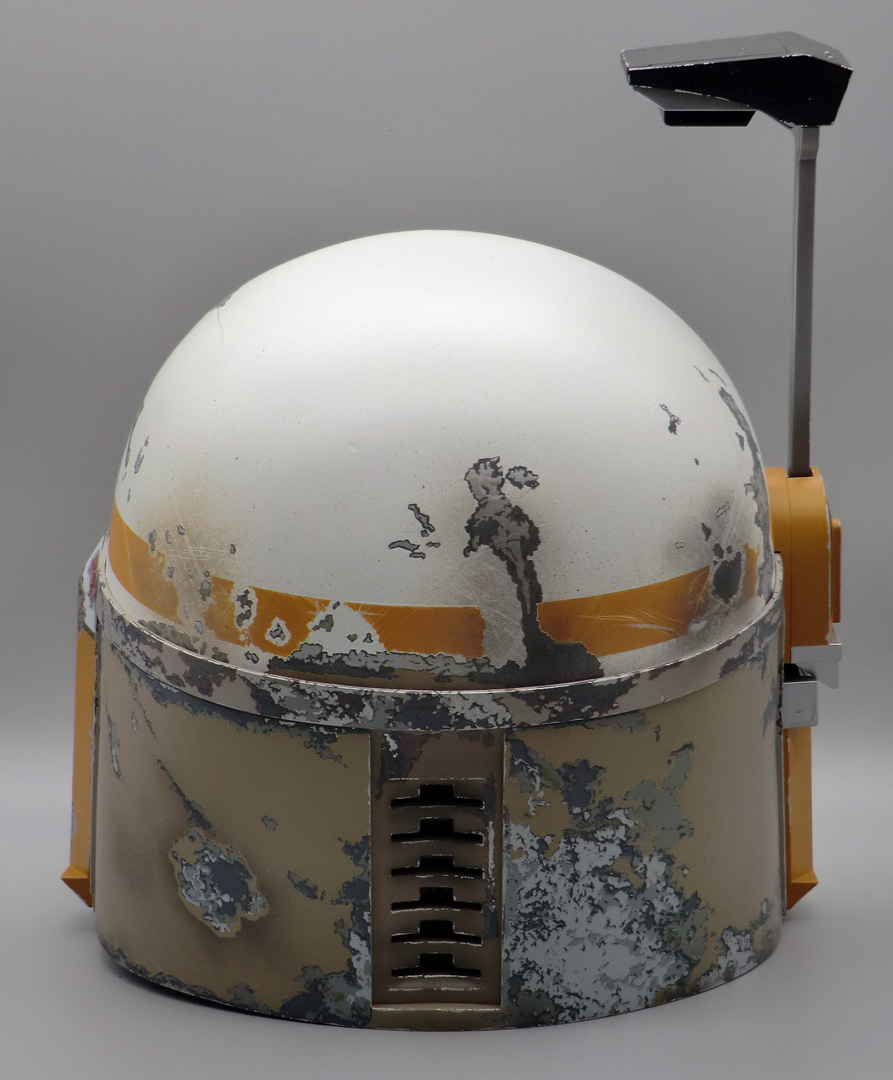 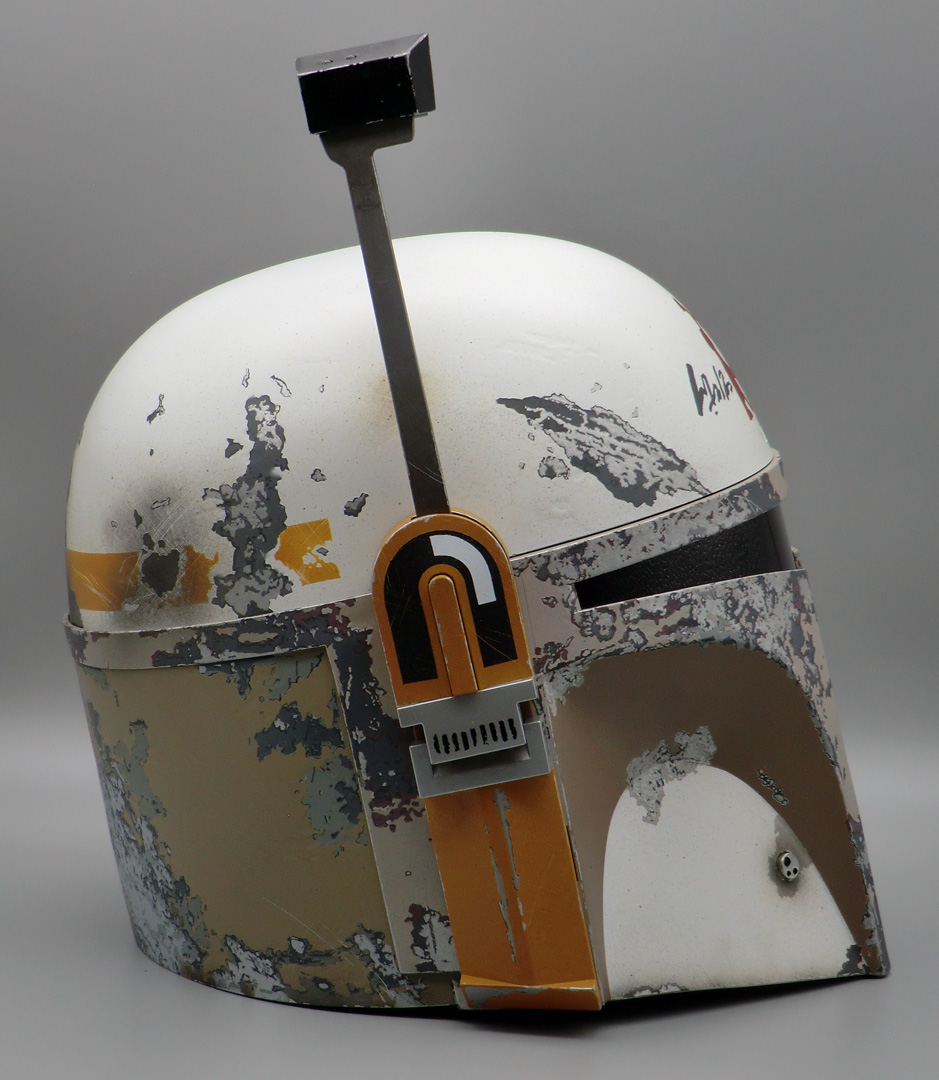 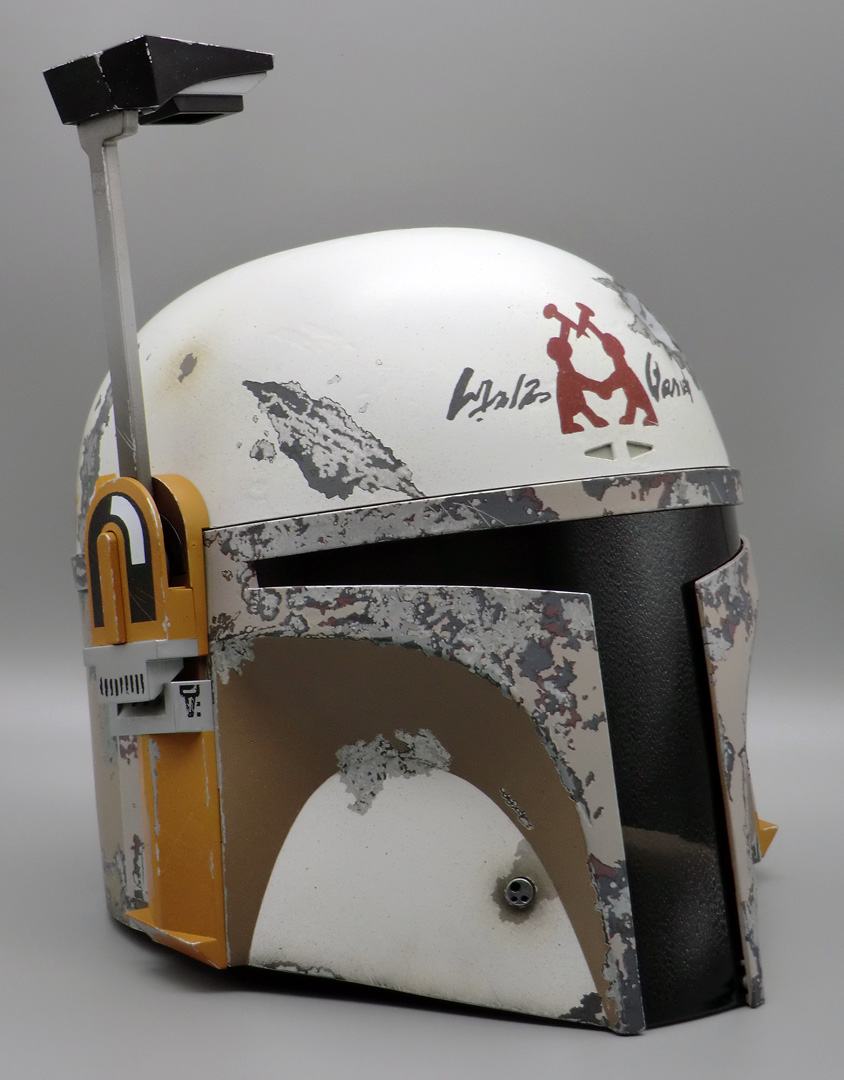 As far as the graphics on the helmet... when I was a kid the Art of Star Wars books and the Star Wars sketchbooks were like Holy Tomes to me - I would look at them over and over and spend hours imagining "what if..." I had great admiration for both Ralph McQuarrie and Joe Johnston, and was just in awe of their imagination and skill. When I did my costume back in 1998 I wanted to include some graphics from each of them.

I had plenty to choose from with Johnston, but I was invariably drawn back to this one, which I have always interpreted as two primitive warriors grappling, with raised war clubs (a rather appropriate symbol for a warrior race). 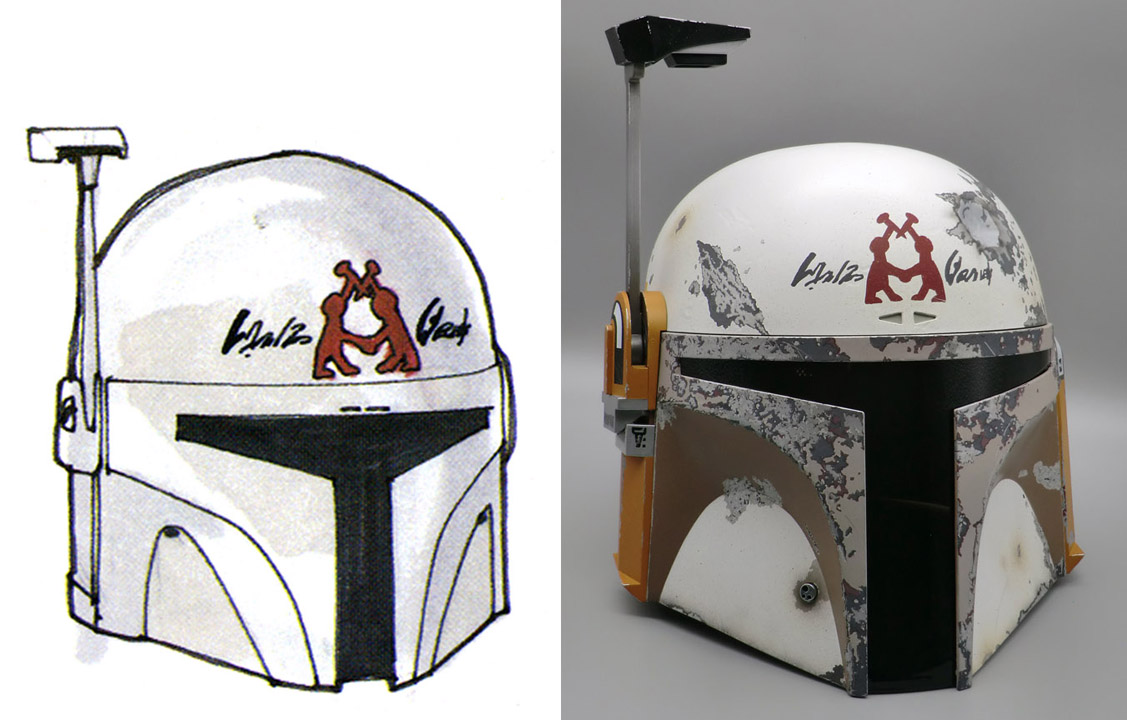 As for McQuarrie, that graphic with the stripe on the Snowtrooper helmet always caught my eye whenever I would flip through The Art of The Empire Strikes Back. Since it was unused (at that time, anyway) and had a great look I figured "why not?" I just reduced the size of the symbols and dropped the stripe down low, as that seemed to work better with the raised midband around the back of the helmet. 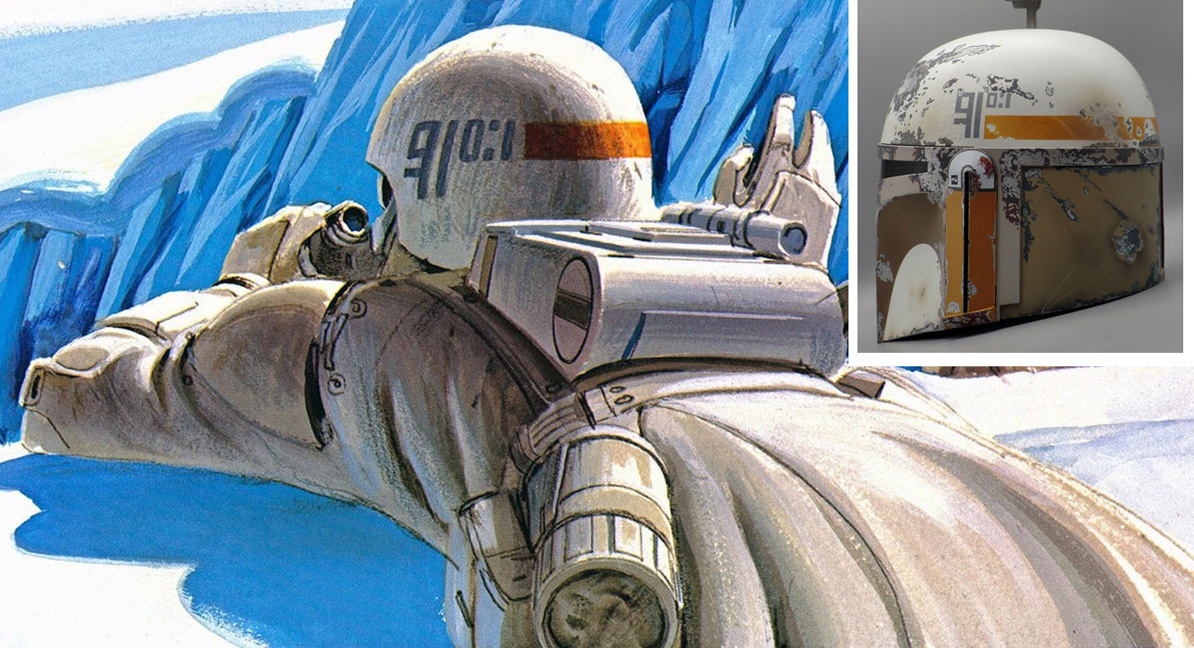 Looks amazing, I have a spare black series helmet, you have inspired me to try something similar.

I told The 48th Ronin via PM last night that Ralph McQuarrie and Joe Johnson would both 100% approve his handiwork.

It goes without saying that I approved of it. Everything about it just works. The choice of colors, the weathering and the graphics are all balanced to my eyes. Nothing overdone.

I'll be working on my custom Fett helmet project again soon. I had come up with the idea of using tracing paper to copy my weathering patterns to painter's tape, but when I get back to work, I'll use the shipping tape method.

I have a whole new respect for Fett helmets painters. My planned paintwork isn't anywhere near as complicated as what you'll see on an ESB or ROTJ helmet, but it's still overwhelming.

RPF PREMIUM MEMBER
Thanks all, and thank you Scott D I know that motivation can be difficult to find at times, but I hope that you can find some time to get back to your own helmet and finish it off - I look forward to seeing it.

I've been of fan of your costume since I first came across it in the late 90's.
Even had is as wallpaper on my computer for a while.

division 6 said:
I've been of fan of your costume since I first came across it in the late 90's.
Even had is as wallpaper on my computer for a while.
Click to expand...

That's nuts! But thank you.

This is by far my favorite paint job of a mandalorian style helmet. It fits the star wars aesthetic so well. I love the colors, I love to see this old concept art interpreted/imagined.

That is an awesome looking helmet!

That is an absolutely lovely helmet! well don!

I'm rather pleased with how it turned out. Probably more pleased to just be done with it, as it turned out to be quite a bit of work.

RPF PREMIUM MEMBER
My god. Not only an incredible paint job, but the sheer patience it took to cut each of the damaged sections is mind blowing; that is an amazing piece of art you have there, well done.

Is this graflex real or fake
2

Yesterday at 9:28 AM
The Ninja