Been a while since i posted here, or anywhere for that matter...rather tumultuous few months for me.

On Sunday April 3rd at approx 930am(aussie time) I debuted (?) my new predator.

Once I got into my new Sauna Suit and ambled onto the street to walk...ohh..70ft..first photogroup, 2nd 10 feet later 3rd five ft later...anyway, 20mins later, I walk inside the main doors...swamped!!!

Ushered away from front door because of the comotion and clamering for photos...i walked about another 25ft, round a corner and there i was for about, an eternity

I now know what movie stars feel like and why they get the sh**s...in the end i had to make the 'T' with my hands to take a break as a small section of the pacific ocean existed within my mask and running out and down my latex chest and it appeared my big tough Predator had pee peed himself as he was standing in his own large puddle....discretely mopped up by a cleaner as i stood chatting with a 501st friend.

Strangely enuff i had alot of people requesting photos when i had the mask off and taking a rest, stating they thought the suit was awesome, head or not.
(maybe they were being polite, instead of saying i have a head like a predators mother ? )

anyhow as they say a picture is worth a sumthing sumthin sumthin...... 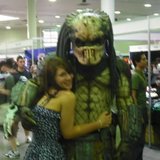 Dude be patient, some sections are checked less than others, i am sure if you give it a couple of days and loose the sarcasm, you will get some feedback.


Now having said that, i think you look a good imposing pred, and i bet it felt great getting all that attention

i like the suit. looks well on you.. thats one of Jaqthelads AVP suits..they are bulky looking.. but suits the bulkier guys.. I had one of the torsos he uses in these suits for my first build.. was tight as **** on me but was a nice piece...

fair play and enjoy it

Nice I can't wait to be where you are, I want that feeling you get from the first hunt. I hope it doesn't trigger a Dessert Storm flash back while I'm in my armour.

Congratulations on your suit debut. It sounds like you had a lot of fun there, especially being mobbed for photos.

Now you know exactly how sweaty these things are. The first time I wore my Predator suit at a convention, I stopped for a break at the convention's consuite. I had to have a friend grab a towel from the pool so I could mop up the pile of sweat that had accumulated at my feet.

You’re one intimidating, yet impressive pred. Looking good there I see why you were swamped…( but then again most preds receive this) How tall are you B.T.W? If you don’t mind my asking. You look huge.
~Estelle

height,,,6'5"...approx 7' in the suit.....there were 3 others on the previous day and just as well i missed em, they were shorter,,,i couldve made them look out of place.

I love the attention, its awesome, but not so it detracts from other people and their hard work

and thanks for the comments

Your suit looks killer ! Thanks for sharing photos and your experience at con .

Very nice costume =3 haha man do you look massive as well. I also hope to get my own pred costume to wear around, Id have sooo much fun X3 only wish they werent so expensive.

thanks for your cool comments,,,big yes,,,and the suit just makes me bigger ...think i uploaded one twice too
here are some more pics that have come to light,,,,and yes its slipping down around the waist, something im working on fixing b4 the next time,,,skin +latex+sweat= slides