RPF PREMIUM MEMBER
Update 9/16:
Going to need this weekend at least to get the first batch done. I have the bottoms and containers done (20 of them) and parts of the tops. I'm trying to figure out the optimal way to produce these. So, I apologize for the delays but they are moving along.

Update 9/8:
There is going to be a slight delay on my original estimate. Two of the supplies needed will not be arriving until Monday and I'll probably need a day or two to get those pieces ready. So shipping will most likely not be beginning until the end of next week. Sorry about that. I was hoping to have all weekend to finalize this run. Also, I've marked everyone who has paid so far in this thread. Thanks.

Update 9/7:
Switched the run to 20 spots and pre-interested parties. Going to really cap it at that for now until I get the manufacturing process nailed down smoothly. I can make them somewhat quick but with each one I'm tweaking the CNC to optimize the cuts and helping shorten the polishing step (which is the biggest time consuming one). So I'll most likely do a second run but let me get through this one first

Update 9/6:
Updated pics on page 3.
(FYI if you don't have a number by your name don't worry. Yours is still getting made)

My first prototype Wrath of Khan Romulan Ale Bottle. This is my first stab at it so it's a rough take and not perfect. Next one I'll polish more to make it a keeper but I was basically learning as I went with this one and trying out new things. It's all cnc'ed clear acrylic and surprisingly it's water tight (i surprised myself with that one lol). I plan on making more to sell in the near future and will be adding the Romulan logo to this one next week sometime. Two things I want to change in the next one: I'm going to make the "cork" taller and I'm going to add a recessed o-ring so it stays put when attached. Otherwise it will be pretty close to this one just more precise and shiny. Learned a lot with with one to make others quicker and better for sure. I've seen other Romulan ale bottles but most haven't mimics the Wrath of Khan version where the top has spaces in-between the rings.

This is the original one used in The Wrath of Khan

RPF PREMIUM MEMBER
Yup, I’m down for one.

Maybe it's just me but, doesn't it seem a bit narrow compared to the screen used one? Maybe too tall perhaps?

GrenadeKing said:
Maybe it's just me but, doesn't it seem a bit narrow compared to the screen used one? Maybe too tall perhaps?
Click to expand...

Same height as the original but an 1/8th inch narrower to be exact. So its actually really close.

RPF PREMIUM MEMBER
You probably have this figured out, but I'm going to type it out anyway. In addition to the original having a thinner ring on the bottom layer (3/16?), the gaps are clearly narrower than the thickness of the rest of the rings, you have them equal which makes everything look too tall. But if you make the cap taller and adjust the spacing to compensate it should be closer. What thickness of plex are you using for the rings?

Lightning said:
You probably have this figured out, but I'm going to type it out anyway. In addition to the original having a thinner ring on the bottom layer (3/16?), the gaps are clearly narrower than the thickness of the rest of the rings, you have them equal which makes everything look too tall. But if you make the cap taller and adjust the spacing to compensate it should be closer. What thickness of plex are you using for the rings?
Click to expand...

I don't disagree with you because it does look that way but when you you actually measure it it seems to be really close. BUT they aren't uniform:

I think like most props they probably just used what they had at the time. Or they might get gradually thicker as you go up the pyramid. So, I chose to go with .25 inches or roughly 6.4mm for them all to make it easier. To be honest I was more curious to see if I could do it because I hadn't worked with acrylic much and wasn't sure how it would turn out.

Now one thing that might be throwing you off is the angle incline. The original appears to be 70 degrees whereas mine is 80 degrees. I'll probably try and mill some out at 70 degrees and see how much of a difference it makes.

I'm going to work on some precision numbers tonight and see what I can come up with for the top (angle and each ring size/spacing).
Last edited: Aug 23, 2021

RPF PREMIUM MEMBER
I know what my X-mas present to myself is this year!

Will this be food grade?

Picard102 said:
Will this be food grade?
Click to expand...

That's the plan yes. But I'll know more once it's completed with those details.
K

Hey guys, here's some documentation that I've got permission to share so you or anyone else can make accurate STII: TWOK Romulan Ale decanters. These dimensions were taken by norbauer (RPF member) directly off the screen-used prop that was owned by squib (I don't think they're a member here). The label graphic was also traced off the original prop graphic. There was going to be a replica released by Roddenberry.com but it didn't get past the prototype stage by the point they left the replica business. I'm just passing this along, credit goes to those mentioned above. 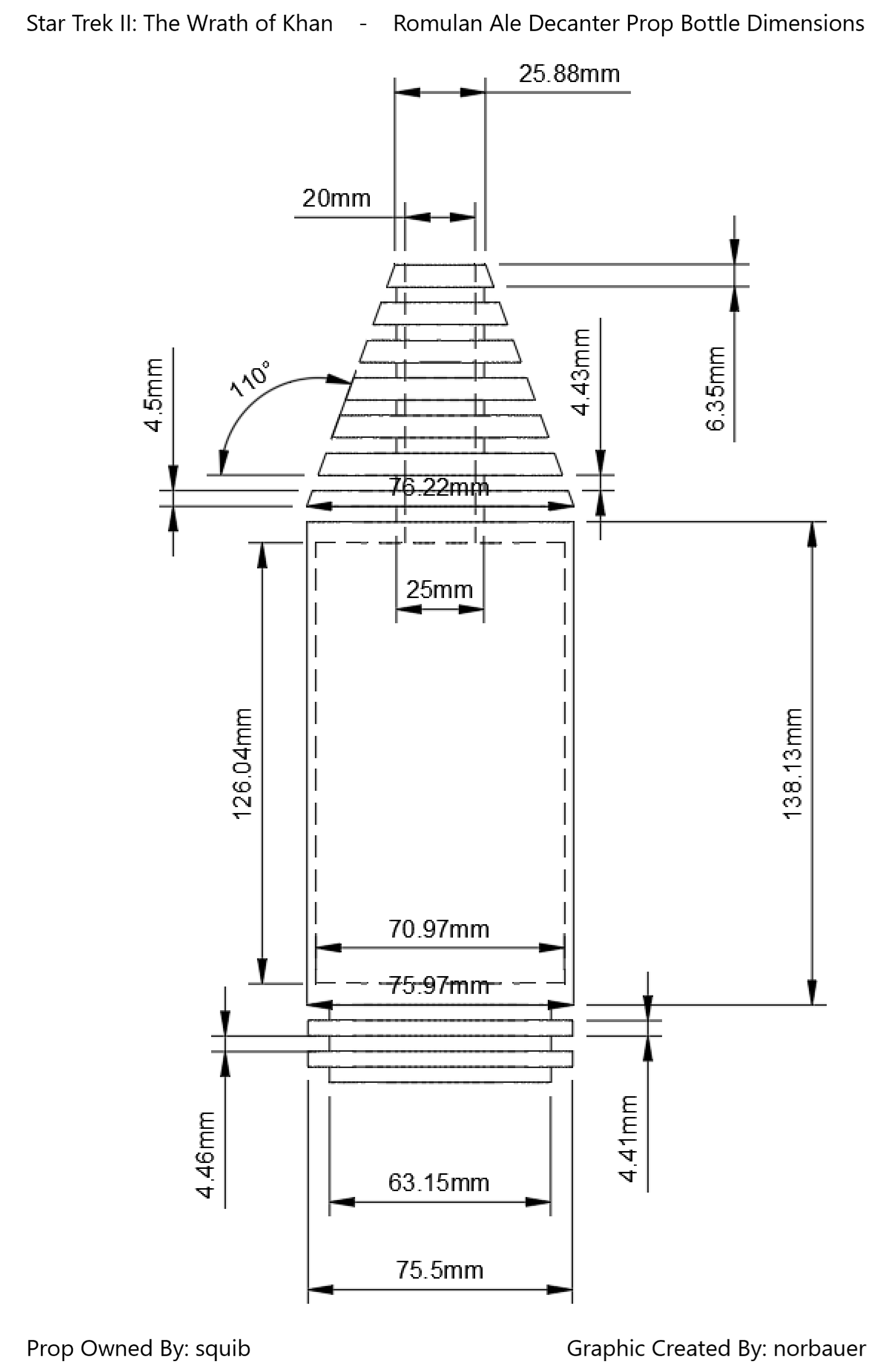 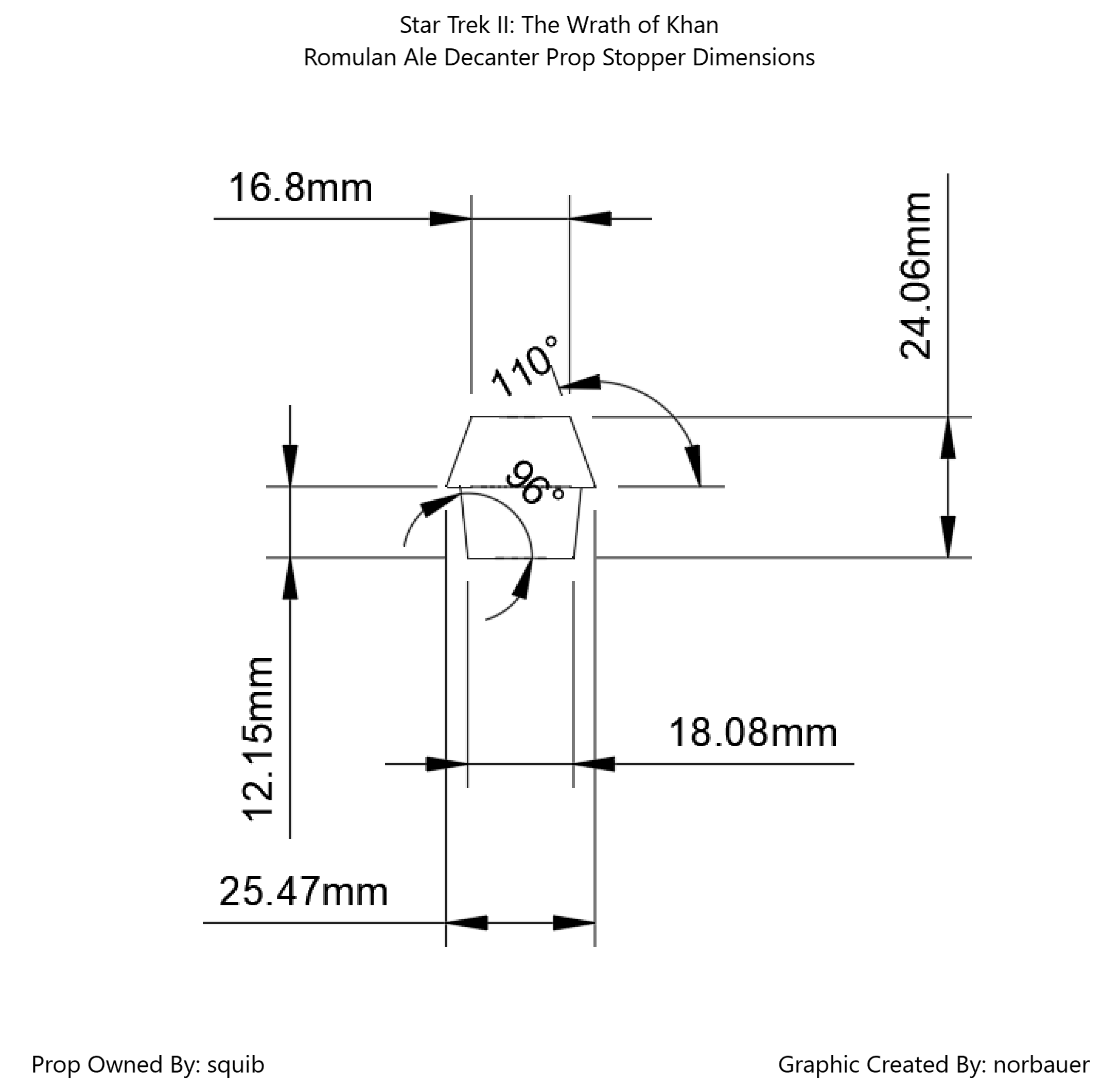 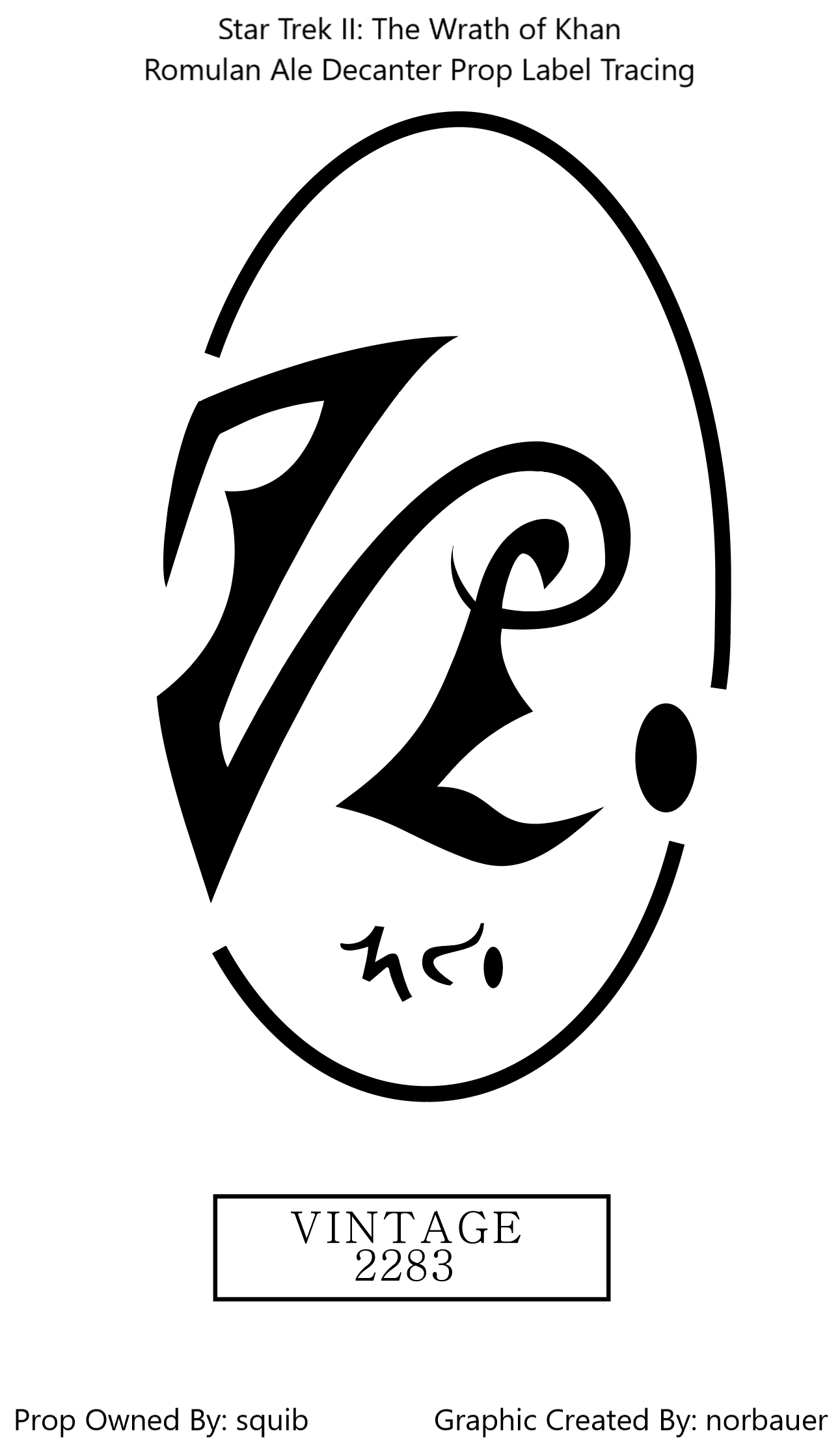 I have an .ai file of this label graphic but the forum won't let me upload it. Any idea?

All this was documented off the screen-used prop that was sold at the Profiles in History Hollywood Auction 83, Summer 2016, lot # 1593: 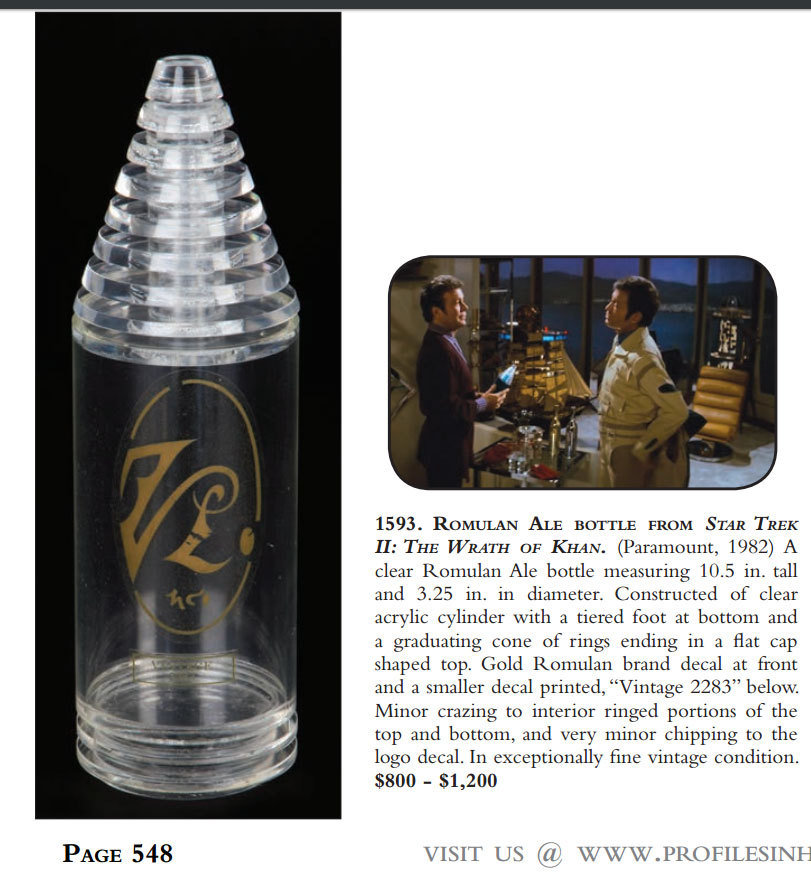 It was bought by squib who after examining it in person shared:

I can tell you that the top piece is not milled from a single piece of acrylic. Instead, it is made from an inner tube and the outer rings were welded on. The bottom most ring is welded into the body tube. The base does appear to have been milled from a single piece with the top of the base welded into the body tube. The stopper is made from two pieces welded together. There is some crazing on the top piece because of all the welding and the age of the piece.
Click to expand...

RPF PREMIUM MEMBER
That's awesome. Thanks for the share. Those numbers are pretty close to what I came up with too. I'll share my drawing mockup when I get to my shop later.

That was the logo I've been toying with. Although I need to make it nice and crisp. Not done with it yet and Lt Washburns looks better than mine lol

Looking great. Any idea what they used for Ale, apart from coloured water. Looks like anti-freeze?
P