Battle beyond the Stars

Does anyone have any information on the ship "Nell" from Battle beyond the Stars? I've done a google search and couldn't find much. I ordered the movie from Amazon so I can at least get some screencaps. I was surprised to see Richard Thomas in the staring role.

The few pictures I was able to find online shows a very feminine organic ship. I was approached by a client to build one and he didn't have much information on it either.

This is about the best picture I could find. 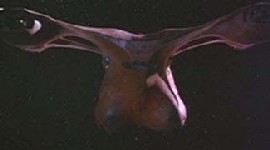 Thanks for any help

RPF PREMIUM MEMBER
I remember smirkig at the design as a 12 year old :lol

I think it's actually based on a (longhorn) cow laying on all 4s if that makes sense--what looks like the breasts in front are actually the knees.

Those ain't no knees :lol

I've also tried for years to get info/ pictures. I asked around back when I worked a bit on Titanic and I was told that this was James Cameron's baby. He designed and built it way back in the day. Anyway, that was the story from the "seniors".

I'd love to see pics of this model and who owns it now. No models or pics when I was over at Lightstorm.

Does Bob Burns have this thing? I know I've seen it sitting around somewhere, I'm just not sure if it was at his place. Its all a blur now :confused

RPF PREMIUM MEMBER
I think they used Sybil Danning's chest as a guide for the fuselage....

The well endowed Enterprise. I haven't thought of that movie in years. My friend and I went to see it only to find the theater listed the wrong time for the opening, we spent three hours in the library, walking around a mall, and just killing time until it did. We were huge Star Wars fans and they were pushing BBtS as the next Star Wars.

Boy it sure was NOT.

Fun film though in some ways. Saxon and Vaughn's over the top acting made it all the better.
D

Originally posted by Lord Abaddon@Mar 23 2006, 10:05 PM
The well endowed Enterprise.Â  I haven't thought of that movie in years.Â  My friend and I went to see it only to find the theater listed the wrong time for the opening, we spent three hours in the library, walking around a mall, and just killing time until it did.Â  We were huge Star Wars fans and they were pushing BBtS as the next Star Wars.

Boy it sure was NOT.

Fun film though in some ways.Â  Saxon and Vaughn's over the top acting made it all the better.

I love the part when he wa stalking about he eats snakes. Or he had Hot Cycle handle bars for his controle wheel on his star ship. :lol
S

I seem to remember that most of the sci-fi mags back then offered extensive coverage of that flick. Will root around in my archieved Starlog and Fantastic Films mags to see if there were any articles on the models.

Here's a cool site with some really obscure ship pictures including BBtS Hammerhead and another kind of look at Nell.

(Be careful though, lots of pop-ups.)

I do remember either Starlog of FF had views of the model from all angles. But I sold my mags so can't check.

RPF PREMIUM MEMBER
There was definitely Starlog coverage of the flick. I'll see what I can dig up.
M

What a wonderfully stinky bit of cheese, eh?

Yes, Cameron was the art director for the flick and designed/built the models.

Thanks for all the info, I'll get screengrabs when the DVD gets here and post them. If I could find which Starlog issue had the pics of it I can order the back issue. I'll check their site and see.
S

This from Gene, an accquaintance of mine who's really into the old ships:

"Both Nel and the Hammerhead ship are alive and well. James Cameron did indeed design Nel. He based it off of one of those art-deco type statues where the woman is sticking her, umm...,. chest out, with her arms behind her. In fact, Cameron was involved with a lot of the FX design and execution on that show, along with Robert and Dennis Skotak, who he would work with on "Galaxy of Terror" and "Aliens." Last I heard (last year), Nel is tucked away in storage in the basement of Lightstorm. I've been told it could use a bit of a restoration, but it isn't high up on Cameron's list of priorities. The Hammerhead ship was over at Corman's place in Venice for a while. Another one of the FX guys got it back in the early 90's, before Corman sold off the Lumber Yard that was the studio. I saw it when I was working with them. It was in decent shape, though the top dome assembly had been removed, sprayed with gray primer and used, for all things, as a futuristic doorknob in another Corman film. They recovered it, but it was still covered with paint. I'm trying to get them to dig them out so they can at least be photographed. Doubt it will happen but they do exist. Actually, I think a bunch of miniatures are still around from that "classic" - I saw Robert Vaughn's ship and the weather satellite from the opening of the film when they brought in the Hammerhead."

I have no other info than this. If you have questions, I don't know if he'll be able to answer them, but I can pass them along. Write me at Spcglider@aol.com

"Last I heard (last year), Nel is tucked away in storage in the basement of Lightstorm."

RPF PREMIUM MEMBER
Any more info on this ship? SUch a classic "Cameron style" design. Falls right in line with a lot of the machinery he's put together.

Hey all,
Can anyone spot these two pieces?

They are not so big, you can see the top of a Lunar Lander next to them
Thanks,
Lee

Turns out they are from the Gepard, along with a couple other pieces so far too.

Damn! Just realized I posted this in the wrong BBTS thread
Move along...

Treadwell said:
There was definitely Starlog coverage of the flick. I'll see what I can dig up.
Click to expand...