Modeled from scratch, not a game rip or existing file modification. It's still not perfect but I wasn't happy with any of the other TDK cowl files out there so I decided to make my own.

I originally modeled it for a cardstock/ fiberglass resin build, but then unfolded for a 3mm craft foam build, so the unfold is kind of somewhere in between. Feel free to re-unfold if needed. It's currently unfolded to 34 cm tall, about 13.4 inches.

You can do with this as you like, just please leave credit to me as the original modeler. I spent a lot of time on it and really don't like seeing when people do a tiny tweak to a model or unfold and then leave out credit to the creator.

I didn't get a chance to build it before releasing it, I realized I wouldn't have time to finish this build and the rest of the costume with Halloween so close. If there's any changes that are needed just let me know and I'll fix it.

**DISCLAIMER** I am an amateur hobbyist 3d modeler, so my work isn't perfect! I have a basic minimum working knowledge so I can model myself what I want for Pepakura work, nothing more! 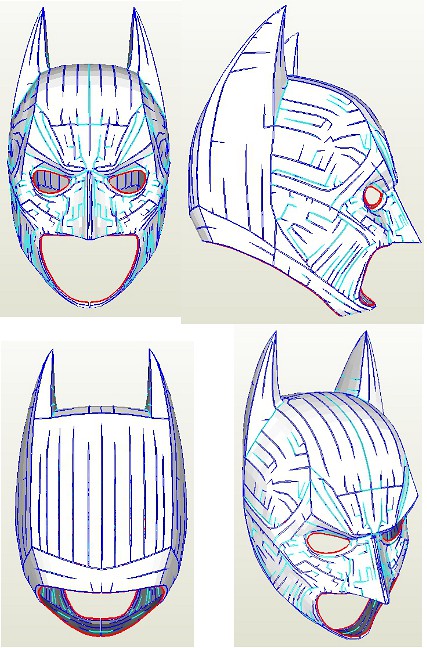 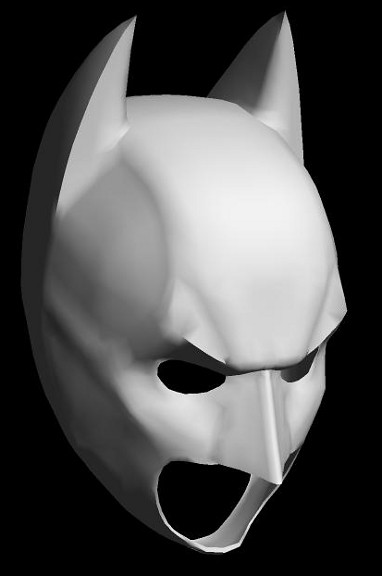 And thanks to EyeofSauron here's a Foam unfold (A4):
Dropbox A4 Unfold for Foam

BATSUIT UPDATES:
I've also received permission from Pichet Paithoon to modify and release his 3d model for pepakura.
Here's what I'll be working with: 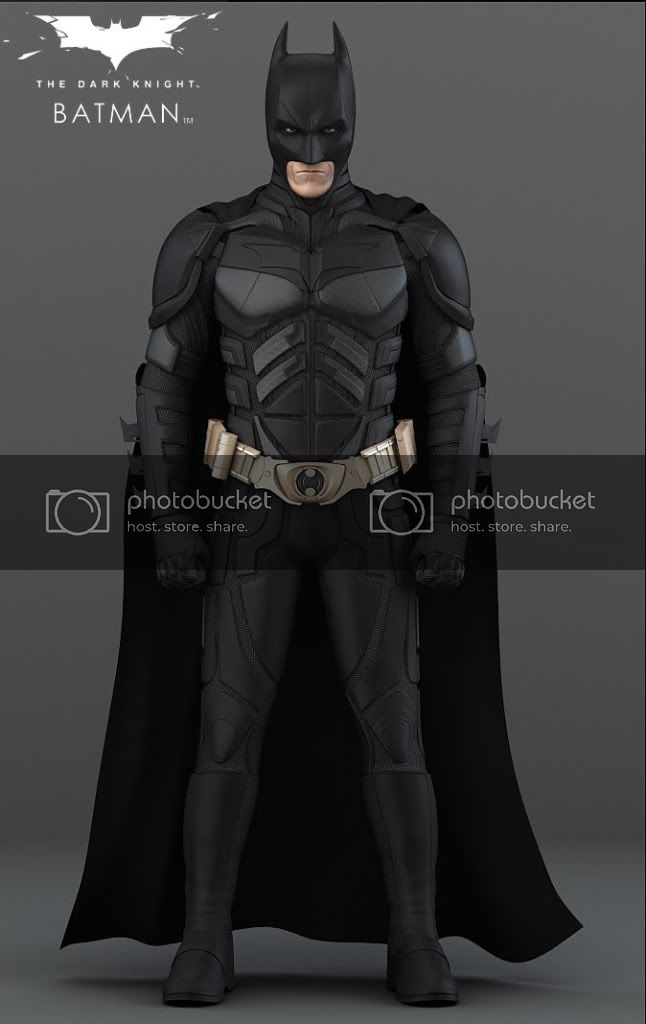 Still working on the batsuit, I had to start by removing the base body/ skin underneath everything. Next step will be to simplify the strapping that was modeled, I'd like to keep the straps included for sizing and spacing but right now every little rib and detail are modeled in there. After that I'll modify the armor parts for pepakura and/or foam. 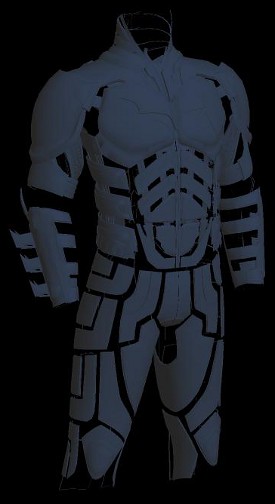 I have two parts that I've already modified and unfolded. These have been edited for pepakura but unfolded for foam. These were scaled for myself so they'll have to be adjusted for each person, as I'm only 5'-5".

The Chest (This does not include the layered part that the emblem sits on, as that is a fairly simple piece to make from 3mm foam): 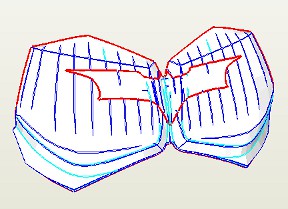 The Upper Shoulder (This is only the upper or top piece, I haven't worked on the second/ lower layer yet): 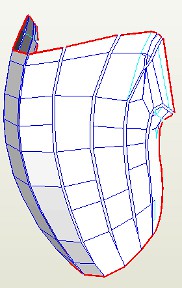 EDIT:
I haven't made any further progress on the rest of the suit, but JFCustom did, here's his post containing the suit unfold (in another thread):

JFcustom said:
Thanks to Durkness who insidiously succeeded in motivating me

Thanks a bunch! Been looking for this for a long time!

You are my hero man!! Thanks!!

Way to go bro! thanks indeed for sharing!!

Thanks much for the kind words everyone! Glad to know it'll help some others out.
I have a couple other TDK parts in the works, the upper shoulders and chest plate. Those are modified from another modeler though and I'm waiting on permission to share those.
I also have a very simple Bane mask for foam started, need to finish that one up soon.

This looks great so I'm making this just for the sake of it Thanks for the file!

thanks so much,i was searching for this for long time now and yours is awesome,thanks again,i'm starting on right now.

thanks for the file
L

If you ever get the Bane mask, please post the .stl or cad files too please! I want to print it out for a friend.


LastRaven said:
If you ever get the Bane mask, please post the .stl or cad files too please! I want to print it out for a friend.
Click to expand...

What kind of print are you thinking of? The model I'm currently working on is pretty low detail, it'll be primarily just be a template for building in foam, none of the tubes or connections are modeled on it. It's mainly a base to be built on top of. (Ignore the head model, it's just a stand-in for proportions sake. It was a video game rip.)

I also got permission from Pichet Paithoon to modify and release his model as needed, so I'll be able to post up some of the things I've already done.
Here's his model:

It takes some work to make it pepakura friendly, so it's slow going. I'm altering it mainly for foam building, but regular pepakura techniques would work for it too.
Here's what I've started with, as these seem to be the most difficult parts for foam: I'll release .pdos as I finish unfolding.
U

That looks awesome! Thank you for your work

I just printed out your batman mask...

I think I might be addicted to putting together pep files... not so much anything after just the cutting and gluing together of the paper haha

Now this is the thread I was looking for!
Since I messed up the first TDK cowl by using not enough hardener with the resin, Id love to try this new file!

Hope to see more soon, this is getting very promising!

This is great! I've been wanting to see this pepped for a long while and it looks just stunning.

Any chance of a PDF for the cowl?


Egon said:
This is great! I've been wanting to see this pepped for a long while and it looks just stunning.

Any chance of a PDF for the cowl?
Click to expand...

I can make a PDF for you tomorrow morning.

Thanks man, I hope you can release all the armor for pepakura too:lol

The Batman 2022 Batmobile and Batsuit in person
2