RPF PREMIUM MEMBER
I have been trying to identify this equipment transport case from Batman Begins for years with no luck. I have a nice collection of Wayne Enterprises Applied Sciences gear currently occupying a Pelican 1720 rifle case that, while nice and tough, isn't quite as in-universe as I'd like.

The black versions and tan versions are similar but not exactly the same. I'm interested in finding or replicating the black style.

If these aren't a found item, I'm thinking they made them by just constructing some simple wooden crates, painting them black, and then casting the outer angled pieces and attaching them separately. In the photo showing the perspective from inside the case, you can clearly see that the inner actual wall of the case and the outer section with the latch carve-outs are separate pieces; they even look like separate materials. The latches look off-the-shelf.

Every manufactured case I've found that has cutouts for latches and corners also has them contoured, none with sharp edges like this. And the tan ones look to me like more obviously wooden... in some shots I think I can even see grain.

Anyone recognize if this is something that already exists?

RPF PREMIUM MEMBER
More evidence they are custom: the angles of those outer pieces fits the theme of the utility belt pouches, down to the matching "vent" patterns.

Based on the quality of that casting, they are definitely props, not commercial items. I know the culture for the props on these films, I can almost guarantee you they are either 3d printed or cast urethane cases.
Last edited: Mar 6, 2020
T

I looked at tons of cases when the movie came out. They are at least heavily modified if not fully custom.

RPF PREMIUM MEMBER
Yep, I agree they are custom. I've decided to try my hand at replicating them myself. I started by building the basic box shape out of poplar. I have more props than are pictured in the shot, so I'm making mine deeper and adding a second layer for the other pieces. The top layer will be a shelf that lifts out. The outer angled pieces will be embellishments that are added to the exterior, likely resin cast.

In the past couple of weeks I've gotten the main box and lid built and numerous layers of Plasti-Dip spray to hide as much wood grain as possible. This weekend I'm building the 4 shelf supports that will be mounted about halfway down the inside walls. I believe I found some latches that will work and be close enough, but I'm waiting until the exterior pieces are done before installing them.

Here's my progress so far, along with my screen used (from PropStore.com) Wayne Enterprises Applied Sciences data plate I'll be mounted to the lid.

After scanning through the entire Dark Knight trilogy frame by frame looking for sightings of these cases, I have some new reference. The following screen grabs have the exposure and brightness turned up to 100% for detail clarity.

New things learned:
There's more than just the single "data plate" on the lid. There are at least 2 more plates (containing just part numbers? serial numbers?) on the opposite lid corner, and on the short side. Also, the main data plate is correctly oriented on the bottom right corner of the lid.

The angled "blocks" (hereafter referred to as the "bumpers" appear to be rubber cast, as well as the feet. They are mounted to an additional riser panel that's just below the top of the case and goes around all sides. The riser looks to be the same material as the box, probably wood.

Bevels everywhere! On the lid, the risers, the bottom of the box itself.

There are 4 mounts behind all the latch catches. This is how the latch draws, sitting on the risers, still line up with the catches, installed on the mounts. The mounts continue on top of the lid. Not sure what they are made of, but possibly also wood, as they would need to be sturdy enough to screw the latches into.

After a LOT of searching I believe I've found the correct latches, or as close as can be found: 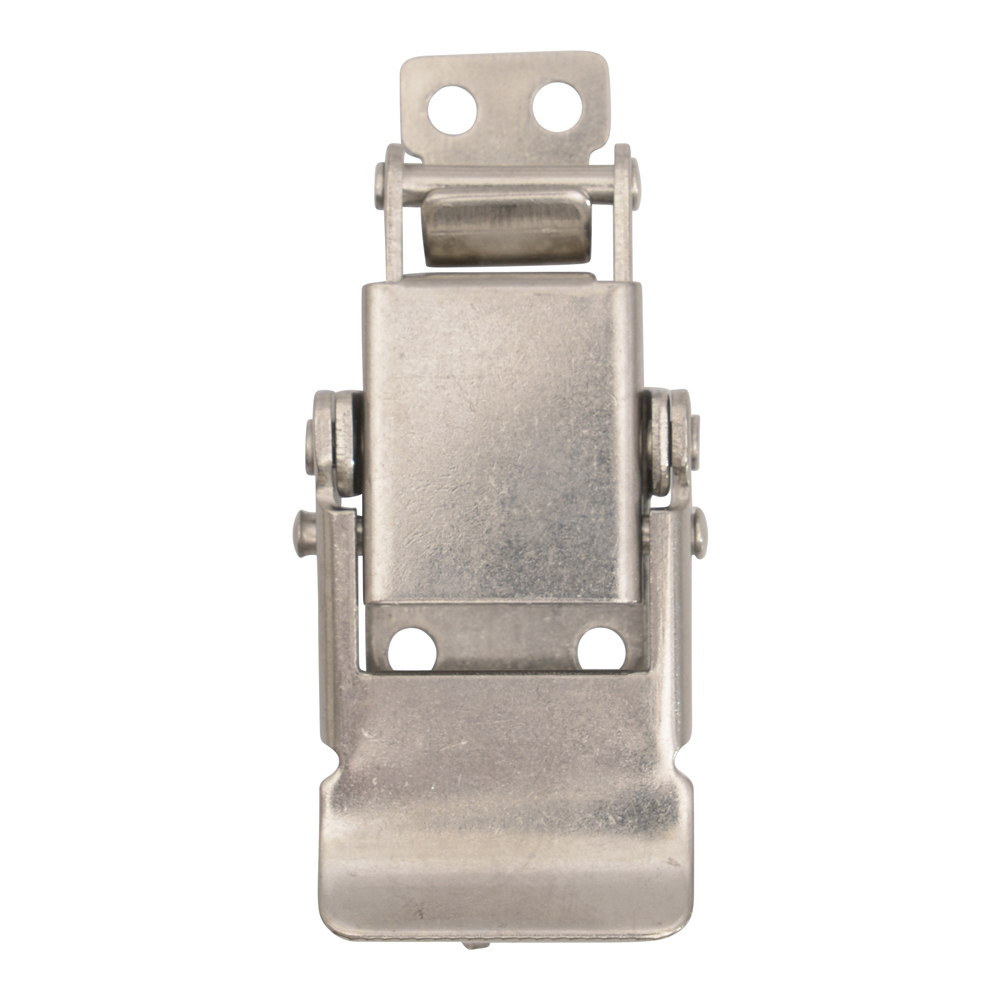 Check out the deal on Stainless Draw Catch, 2-3/4" at HardwareSource

At 2.75"H, this seems about right next to Morgan Freeman's hands.

RPF PREMIUM MEMBER
I've also redesigned for the Nth time my foam insert. This is to accommodate the internal case dimensions of 18"x31". This is only the top layer. It will sit on a shelf that also serves as the lid for the bottom layer. I tried to adhere mostly to what's on screen, aside from adding some spots for some steel Grapple Gun darts that are just too cool to leave out.

The other main difference in this versus what I had in my Pelican case is the trenches around the middle island are wider and will provide a spot for the Kevlar Utility Harness (also in the works).

McMaster Carr is one of the "go to" sources for many of the shops here in Hollywood and these latches I've used on a couple of projects. They appear to be the same ones you have posted, but here is the link just in case. McMaster-Carr
Edit: Corrected the link so it points to the specific latch
Last edited: Apr 8, 2020

lmgill said:
McMaster Carr is one of the "go to" sources for many of the shops here in Hollywood and these latches I've used on a couple of projects. They appear to be the same ones you have posted, but here is the link just in case. McMaster-Carr
Click to expand...

Ha! I knew I should have just started by asking here. I love this place.

RPF PREMIUM MEMBER
I've been working with my friend Johann Leiter to come up with designs for all the parts that will need to be made. We think the angled bumpers and feet should be rubber, the flat "riser" panels that the bumpers should attach to are 0.5" wood, and the L-shaped latch mounts on the lid should be high density resin prints that we can drill into.

Johann has created these fantastic models, which are admittedly still undergoing revisions.

RPF PREMIUM MEMBER
Top layer foam is in. I’ll need to trim up a bit around the grapple, and a few cuts so the utility belt can fold up correctly. But overall I think it’s great.

Next steps will be side panels then bumpers.

RPF PREMIUM MEMBER
Welp, after lots of experimentation, I'm convinced that there is not a full belt in the above screen grabs. There's simply no way to fold it up in the way they show given the space. It's probably just the center buckle and a couple of links for effect.

So I'm redesigning the belt cutout of my foam to deviate from screen used, but in a way that allows it to fit, and shows off a few more of the links.

RPF PREMIUM MEMBER
Looking at your reference pictures I agree that it's not a full belt. Are you going to make the harness part of the belt to match the appearance on screen, or are you going to leave it out? It's looking great by the way.

RPF PREMIUM MEMBER
The harness will be separate from the belt, as the belt will sometimes join the rest of the Batsuit on display. The belt is resin and the harness buckles will be aluminum.

RPF PREMIUM MEMBER
Here’s a 2D mockup of the harness layout using the 3D models of the buckles as they will be machined. I’m aware the 4 quick release buckles are asymmetrical here and that was corrected before production.

After they’re made they will be paint matched to the belt (as will the Grapple Gun).

RPF PREMIUM MEMBER
Aluminum buckles are all machined now. Painting is next. I don’t want to give away too much before the final reveal, but they are spectacular

RPF PREMIUM MEMBER
Incremental progress: the 4 lid latch mounts are done. These blocks are what the lid side latch hooks screw into that pushes them out 0.5” from the box. 0.5” panels on the box will make the latches match them.Bumper blocks in progress. Prints are in progress now then will be rubber cast.

I think I would have skipped the bevel on the lid, too.

RPF PREMIUM MEMBER
Revised foam is in. Tweaked a few other depths and sizes. Mainly the belt fits now, at the cost of some accuracy. Grapple body is out for painting. Grapple darts are more visible now, clips sit a bit lower, harness strap trenches are wider, shallower. Got the foam glued down to the wooden shelf below it. Basically this tray is 3 parts:

With 2 straps attached at the ends for easily lifting the tray out of the case.