Hey guys. I've been practicing foam since I saw the Durkness/Cullen Cosplay a while back. This is my first attempt at a full fledged suit. So far it's not too awfully great, but I'm hoping I can save it and make it into a good enough suit for me.

I know it's odd, but I started with the gauntlets for the suit. They're built with 5mm and 3mm foam, but I'm going back to make a bulkier underpiece instead of strapping them.

For the torso, I cut one piece out for the chest, did an undercut to separate the pecs and then glued it down to another piece of foam by the middle and edges to add more contour and shape to the chest. The abs I just took a look at a few Origins threads on therpf for reference and I really really looked at Reznor9's Origins thread a ton. For the ribs, I took two sheets of 5mm foam and drew straight lines using a ruler for every centimeter and then used my woodburning tool to sort of engrave them in. Then, I placed everything on top of each other to see how they'd look.

Next, I assembled an entire foam piece to span across my waist and connect everything together. I added some more detailing pieces to the sides to make it just a tad less simplistic. However, they seemed to make the sides a lot more bulky than I had hoped. Losing weight could also probably help this... But the bat symbol was hand drawn onto 2mm craft foam and hand painted with permanent black acrylic. Then just slapped onto the chest with some hot glue.

Next step, the belt needed to be done. I used the Foamcave's Origins belt template for this but it's needs quite a few modifications before I'm happy with it. I sprayed it with Rustoleum 2x primer first and then a metallic silver spray. I wasn't happy with how it contrasted to the suit so I mixed black acrylic with water and painted along it. I dabbed it with toilet paper every few seconds and gave it a really really dirty look.

Finally, this is what I came to last night. I know the lighting isn't the best but I gave the abs, chest and biceps the same dirty/weathered sort of effect as the belt and assembled it all back.

And these are the two test fits I've actually gotten pictures of so far. Right now I'm trying to figure out how to connect the neck piece so I can start on my fourth and hopefully final attempt at a cowl for the suit.
Last edited: Apr 2, 2015

That looks great! I'm super jealous right meow....Batman is on my list and he is too far back for me to start this soon. Since I see the Dremel, if you use the smaller barrel sander you can make the appearance of all the screws he has on his suit. I think this is turning out to be a great build.

nice im working on one myself

Thanks Reznor. I'm looking forward to seeing your second suit as well!

Looking good. I am still hard at work in my own origins suit. Your looks far better than mine. Great work. Cannot wait to see it done.

Thanks for all the feedback. Does anyone have any tips for the cape? I'd like to do a 6 panel cape but i have no clue where to start.

Here is a template for the cape that I found online.

Reznor9 said:
View attachment 460657
Here is a template for the cape that I found online.
Click to expand...

So basically cut one panel at a time and find Alfred and a sewing machine to sew each panel together?

Also small update. I have 3 exams this week, so I'm planning on getting back to the suit sometime this weekend. (hopefully)
B

Nice work buddy! I was working on one myself but took a break a few months back. Jerry (Reznor9) has convinced me to get back to work on it though. That and Comic Con is right around the corner. I will be watching this one.

Finally made a little more progress. Built one of the thighs but not quite happy with it just yet. And i also made headway on the cowl. Foam portion is done, now it's time to fill the gaps and seams.

Great job on the cowl! I also made some progress on my Origins build. Will update my thread soon. What are you going to use to fill the gaps?

Bigbat23 said:
Great job on the cowl! I also made some progress on my Origins build. Will update my thread soon. What are you going to use to fill the gaps?
Click to expand...

I'm testing out a few ways right now. My favorite so far is Kwik seal. I'm pretty sure it's a kind of caulk. I saw another foam builder use it and it's pretty good looking after paint.

Also, gloves came in. They're a little damaged but they'll do nicely for the suit along with a few future suits. I've got some calculus homework so i only snapped one photo. 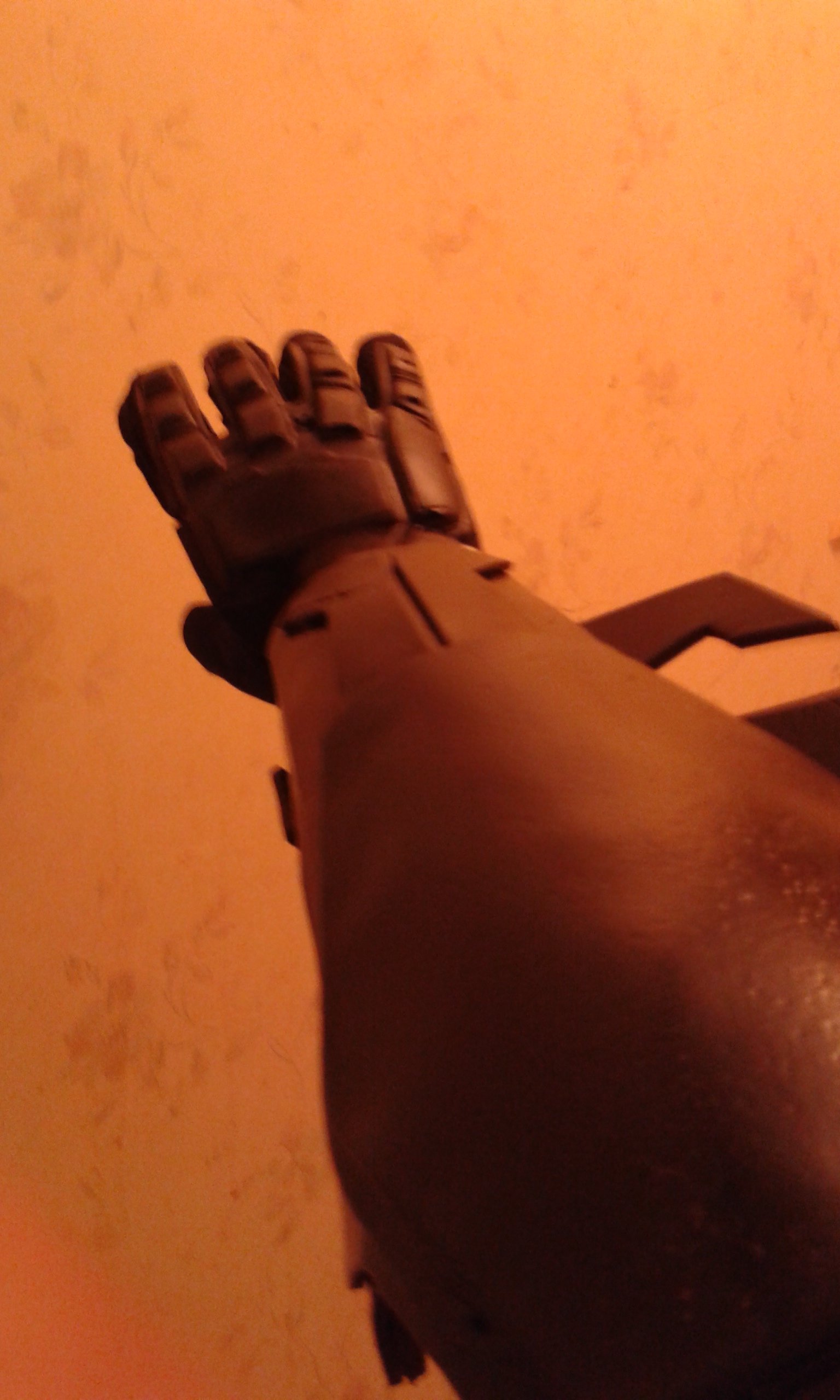 Nice work. What thinkness of foam did you use on that cowl?

Reznor9 said:
Nice work. What thinkness of foam did you use on that cowl?
Click to expand...

The white is 5mm craft foam. The black portion of the ears is 3mm. I modified Jfcustom's file to where the ears were two pieces for an easier time.

Hey guys! Finals are over and car repairs are done. So the suit has been under repairs. My new pup jumped on all the pieces so i redid the underside of each gauntlet and fixed the torso. Now there is a new shoulder attached and the neck piece is attached but I'm not quite happy with it still. 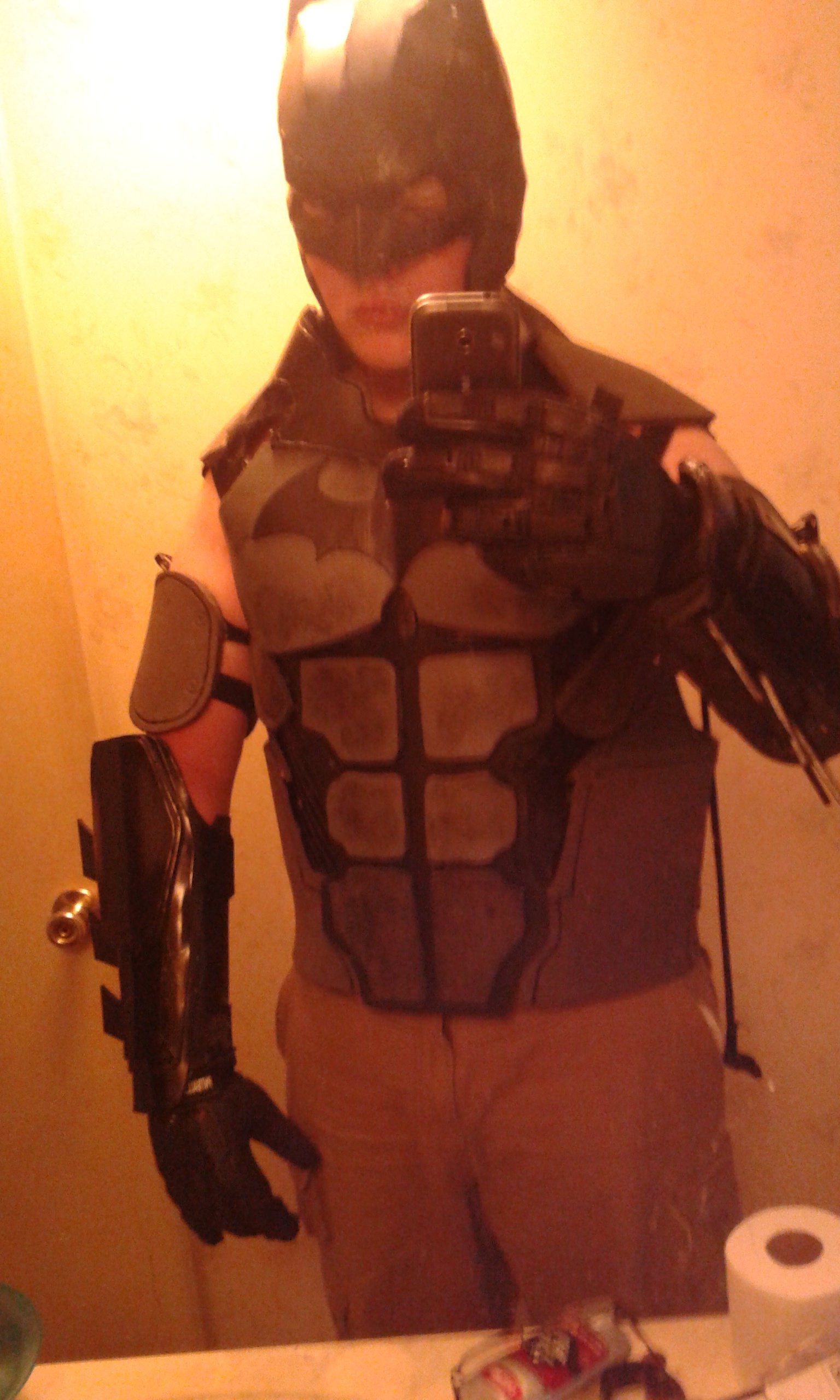 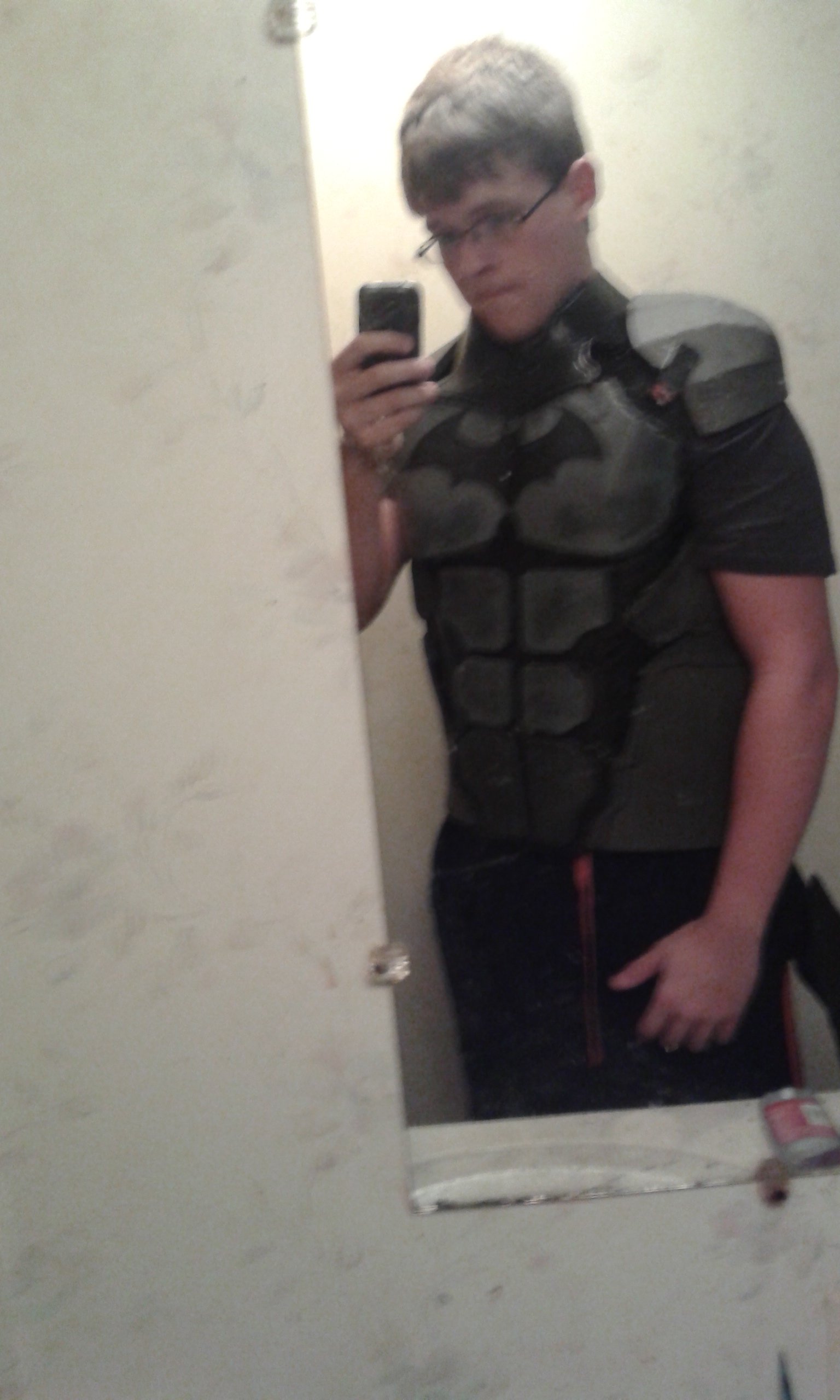