Hey, So this is my first build thread that I've started. Apologies for any mistakes I make in advance.
I've been inspired by people here over the years and the creations that are made and when my girlfriend and I recently decided to attend our first comic-con in the UK I decided that I would follow in the foot steps of all the good people here and attempt to make my own costume.
So after we had decided on a theme (Assassin's Creed) I chose Ezio as my character (this was both good and bad, I'll explain why later) Anyway what transpired was that I did not leave anywhere near enough time to do what I wanted and so my hand-made costume became a handmade prop/part with a bought costume underneath.
When I started I looked for all the reference materials I could and the RPF did not disappoint. I thought that Ezio, being well travelled terrain, would be the best one to find reference images for, and it was... It also meant however that I was suddenly competing with the quite frankly outstanding costumes that had been before- no pressure then!
Starting out I decided that the insignia was quite a tricky thing to make so decided to begin here. Searching the RPF I found Athanasios' thread and was in utter admiration with the overall costume and the fact that he had made everything from leather, from scratch. So much so that I decided to take a stab at leather as well.
Having not worked in leather at all before, (or really anything other than dabbling with foam) I began researching and sourcing the tools and parts I thought I'd need to create the insignia and belt etc. Once I was done collecting I then got to scaling and pattern making and then I began cutting leather... with 2 months to go before the con. Loads of time right?! Nope, Rookie mistake as I have a full time job as well so not enough time at all, not even close!
Anyway, after those 2 months and a full week off work and on the project of 15+ hour days right before the con, this was the result.
Be gentle please 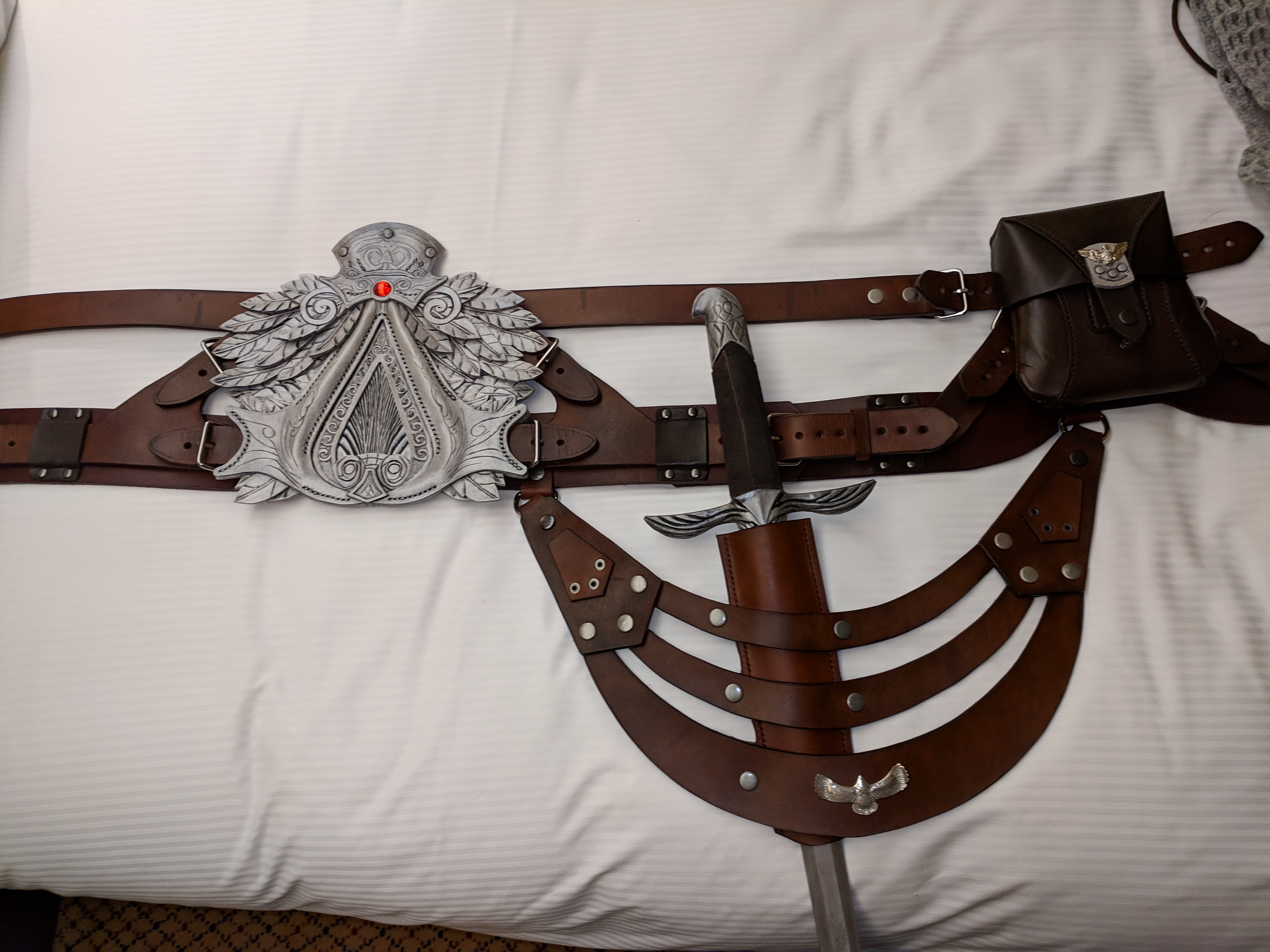 Dying, painting, aging and final assembly of the insignia and belt front section.

Back section of the belt, cutting, dying and assembly including sword frog loop additions. Also fitting and wearing the final assembly.

Pouch and sword frog assembly and attachment to final assembly.

Somewhere a long the build I realised that I didn't have enough time and so ordered a costume and it came with it's own accessories. This is comparing the scaled one of mine against the bought rubber one.

This is the finished article and me wearing it in costume after the con.

All in all I was really happy with the results and learnt so much along the way for ideas on how to do it better in future and for other projects going forward. Biggest lesson was to start a year or so ahead of the convention that I want to go to so that I have enough time to make the costume

Lookin' awesome! I love Ezio (of course, who wouldn't?) but always feared making a cosplay for him due to all those details like you tackled, so great job!

PlanetAlexander said:
Lookin' awesome! I love Ezio (of course, who wouldn't?) but always feared making a cosplay for him due to all those details like you tackled, so great job!
Click to expand...

RPF PREMIUM MEMBER
That's very well done! Did you mold the raised section of another piece of leather like making a padded belt/watch strap or just form it freehand?

Also, what kind of silver paint did you use? I made a Ezio vambrace on commission and it's interesting to compare how we approached it.

Wailonskydog said:
That's very well done! Did you mold the raised section of another piece of leather like making a padded belt/watch strap or just form it freehand?

Also, what kind of silver paint did you use? I made a Ezio vambrace on commission and it's interesting to compare how we approached it.

It was wet molded on a quick shape I made from EVA foam. After molding I also cut it oversized and then when I pulled it in and stitched it to the layer underneath it increased curved shape.

The silver paint I used was Eco-Flo Cova color. I had to apply about 3 layers, I think because it's thin so that it soaks into the leather but that also means you need more layers. It was then anitqued with black eco-flo gel.