I've been working on an inexpensive harness for SCA armoured combat, with some help from a more experienced fighter and armourer, and wanted to share some of the materials and techniques here on the Lair as a potential alternative source for armour bits.

First things first, what you really need.
HDPE food grade barrels/trashcans.
Work gloves.
A jigsaw or band saw for cutting plates.
A drill for punching holes.
Rivets and/or parachute cord for binding plates, making hinges, etc. If using rivets, the pop gun type rivets are not advised, copper rivets and a small hammer are much stronger, and look much bettter.
Newspaper or kraft paper, masking tape, and a sharpie for making patterns.
A heat gun. (I've heard that this stuff can be softened with a couple minutes in the oven on low heat, but I'm unwilling to risk screwing that one up.)
A propane torch.
A hard, smooth surface for help finishing edges. Concrete works fine. My railroad track anvil is doubling for this use as well.
Sanding tools.
Paint.

There are steps I don't have photos for, and steps I've not completed myself, so I guess this post will be an ongoing project for a while.

1) Once you have an image of the armour you want in your head. Sketch out patterns for each individual plate, and tape them on to the sides of your barrel, play tetris with the shapes so you waste as little plastic as possible. ;>

2) Grab that saw and start cutting. You'll have really rough edges at first but there's a fix for that later. I don't have a jigsaw or anything of the sort, so up to this point was done entirely by a friend in trade for a squires chain I made.

Here you can see some of the torso pieces cut, and their lacing holes drilled. Note I'm not making this pretty, it's going to be hit, a lot, by big dudes with rattan clubs, and it's going to be hidden under my clothes anyway. The lettering and stuff stamped into the barrels can be sanded down. 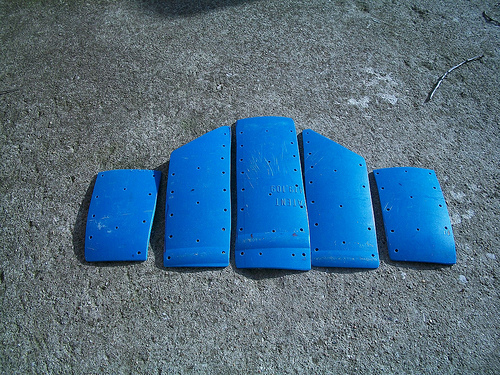 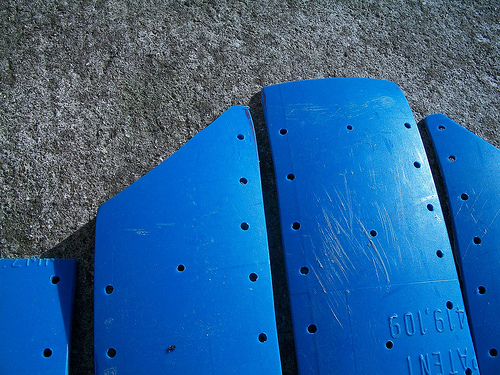 3) Once everything is cut, fire up that torch, set on medium low... ish. And braze the edges, you'll want to look for the plastic to start to get shiney, then brush that edge against your concrete or whatever. Repeat on the corners of each edge to kind of round them out. Here's a before and after shot. 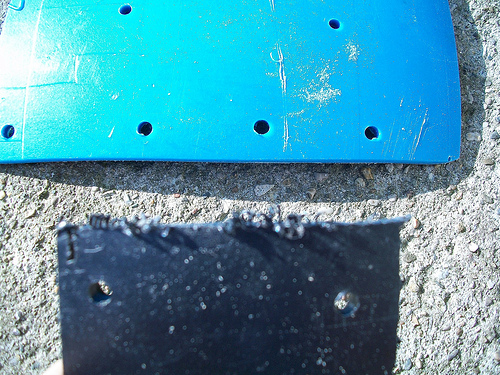 4) At this point, you should have a set of plates that aren't exactly flat, or maybe too flat. That's where the heat gun and your gloves come in. Crank up the hairdryer from hell and apply heat to both sides of your plates to soften the plastic. You'd have to work really hard to actually melt it with one of these, but it can happen. Once it's soft enough, you can simply form the curves you need with your hands. Let it cool at it's own pace, it doesn't take too long before it will hold the new curvature.

The heat gun, anvil, and a thigh piece I'll be shaping in a day or two with more photos to come. No, I didn't pick the colour, it's just what was lying around, you'll be painting yours anyway, so quit complaining. ;> 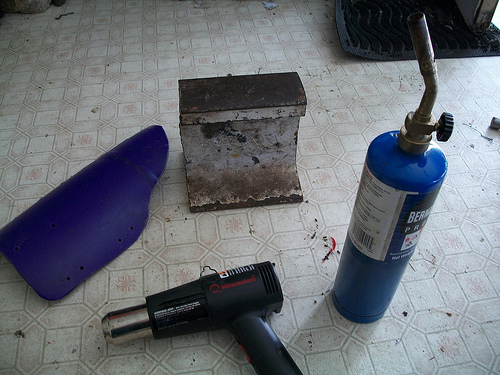 The color of the last picture is fine
It looks great

So! About those updates?

The Roman shoulder armor on my Ceremonial suit is of the same material. Its a good resource for armor. A lot of LARP and battle reenactment folks use it. Nice work. Looking good.
You must log in or register to reply here.
Share:
Facebook Twitter Reddit Pinterest Tumblr WhatsApp Email Link
Top