Here's one I don't think I've ever seen discussed on the RPF. Ever since I was a kid, one of my all-time favorite pieces of gear in moviedom were Stallone's bow and arrows in Rambo II.

I absolutely loved the bow itself as well as the bomb-tipped flights. Were these all custom-made for the film or were they sourced from existing gear? I am not an archery expert, so I will defer to others on this prop's background. I would LOVE to have a mounted set of Rambo archery gear up on a wall in my media room.

Here's one of my all-time favorite movie shots, along with Stallone donating one of the bows to Planet Hollywood. Sorry for the large pic, but since I'm hoping we can break down origins/source, figured it would help to see as much as we can.

Rambo first Blood Part 2: Stallone had a custom built Hoyt Spectra bow with glass limbs and Omega wheels, which transfer the cables laterally during the power stroke, obviating the need for a cable guard.

Hoyt/Easton later released a commercial bow package based on the Spectra model (which included the Streamlight flashlight stabilizer, a custom "survival knife" with compass and necessities kit, take down arrows made by Easton, used laminated limbs and normal wheels, with a cable guard

Rambo 3: Hoyt ProVantage FPS Plus with a 90 lb. pull. I was told that they wanted a hard pull to accentuate Stallone's flexing muscles.

In the new film, I believe it is a Hoyt Matrix and a Hoyt Gamemaster in the film. Stallone requested the Gamemaster at 70# and traded for 50# limbs after a few weeks. This apparently has to do with the fact that he's expected to remain at full draw for unreasonable lengths of time during the filming process

The heads you speak of were known as 'Ripper's' made from 1956 to 1984, basically they were just polished and painted black. The exploading tips were indeed Razorback 5's painted gold for Rambo 2, and painted copper for Rambo 3. The bottoms of the cases were then filled with auto body filler, sanded down, and then painted. The box was an original box that came with the razorback's which was painted black, and then a card made up with 'Explosives' to hide the Razorback name on the top of the box.
The takedown arrows were made by Hoyt, with black feather 4" fletches. I have all of these items, in a dispaly, once i take some photos i would be willing to post them if interested?
Click to expand...

Wow, guys. That's some good info. Exoray - do you know if any of the bows were ever replicated?

How would we even go about making one if we were to undertake something like that?
G

Wish I could help in your search, but I know next to nothing about compounds...

AT-AT Luvah said:
Wow, guys. That's some good info. Exoray - do you know if any of the bows were ever replicated?
Click to expand...

I'm sure they were but to what extent I have no idea, my dad was really into knife and archery collecting at that time so we went to a lot of 'swap' meets and other events but I at that age it was pretty much all over my head... I do remember seeing several screen used Rambo knives being offered up over the years at the shows, even number matched pairs across 1&2...

But, like glim999 my dad is a traditional archers so his archery collecting was more focused on longbows and other traditional equipment...

If I was going to replicate one I would probably join a forum like the one I linked to, find the vintage parts and assemble one with their help... The good thing is that most compound bow archers like the newest and best in bows so like electronics the old stuff is generally real reasonable...

Always loved the breakdown portability of this stuff.

for some reason i have this link in my bookmarks. Not a lot of info though bu some ok pictures.

I guess there is uniformity all around in that these were custom-made Hoyt model bows.

But when it says they had 'glass limbs' what does that mean? Are those bow limbs really made of glass? Or is that a euphemism/archery jargon for something else?

No, they mean fiberglass limbs

A couple more shots from around the net, including an ad I found for the Hoyt Rambo commercialized bow from the mid '80s. 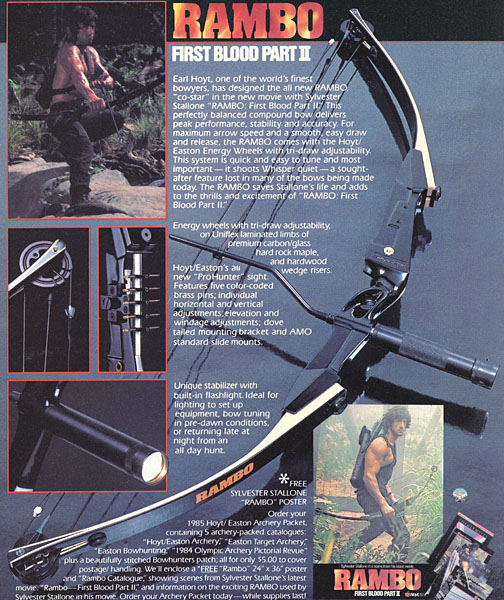 It's funny - in my travels researching this bow today, I came across an archery site. Just like us here at the RPF, only with bows and arrows. People love the compound bow and the arrows, but complain to high heaven about his form. How it's WAY off. And how those 'explosive' arrow heads are the equivalent of putting a golf-ball's weight on the end of the arrow, thereby ruining all balance, distance, and destroying any chance of actually hitting your target.

So if we're propheads and rivet counters, what would we call those guys? Arrowheads?
Last edited: Nov 30, 2008
S

Hmmm, from the photos he appears to be left handed. So to be accurate you need to find a left handed bow. That would suck if you're right handed.

How heavy is the compound bow? Not talking about the resistance of the cables in the full-draw position, but the weight of the bow itself. Any ideas?

I own all three bows in their exact movie configuration. except for the paint on part three and part four bow.
they are nearly mint condition, which is very hard to find for such old bows, so i dont had the balls to repaint them.

the bow from rambo IV is not a hoyt ! it is a very old marttin cougar II without cable guard.
they´ve painted it completely flat black for the movie.
and the explosive heads from part 2 and 3 are not razorbak5 but razorbak4 broadheads !

Why are they not all black?

left is the hoyt spectra with omega wheels from rambo 2, in the middle is the martin cougar from rambo 4 which was painted completely matte flat black for the movie, and on the right is the hoyt provantage from rambo 3 in the complete movie setup, except for the high gloss black paintjob seen in the movie.

Cool! I think I still prefer the Rambo 2 Hoyt Spectra.

By the way, why are they called compound bows?

A friend of mine had the commercially released Hoyt from the second movie.

Ghost in the Shell - "Cutter's Geisha"