This is easily the project I'm proudest of, an Ant-Man suit and a 6'5" PEZ Disepenser made entirely of Cardboard and Duct Tape.

Made for a dorm event called the Cardboard Duct Tape Battle back in 2019, the PEZ Dispenser is as functional as I can get it on the budget I had. It includes the outer shell, as well as a sleeve that can slide out. Unfortunately there aren't any giant pieces of PEZ inside, the build was almost as heavy as I am as it was, but the head is detachable and is fitted to fit most adult heads without too much tilt. There's a panel in the front by the nose that slides off to the side so whoever is wearing the head can see out! 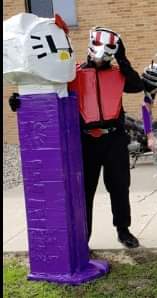 Hey thanks so much