Ever since the Mando episode aired on Book of Boba, I jumped right into modelling up the "turbonic venturi power assimilator" which took a few weeks off and on to complete. I was going to print a full-size version of it to display, but that will take hours, lots of material, time, and money to complete. My focus shifted to converting a model kit N-1 but decided to convert the toy since the scale was larger and the assimilator would be able to be seen in more detail. I acquired one (relatively cheap) but couldn't bring myself to chop it up, so instead, I decided to do a minimal chop conversion that would allow the ship to be returned to stock.

First thing was to scale the assimilator down and curve the bottom to match the surface of the ship: 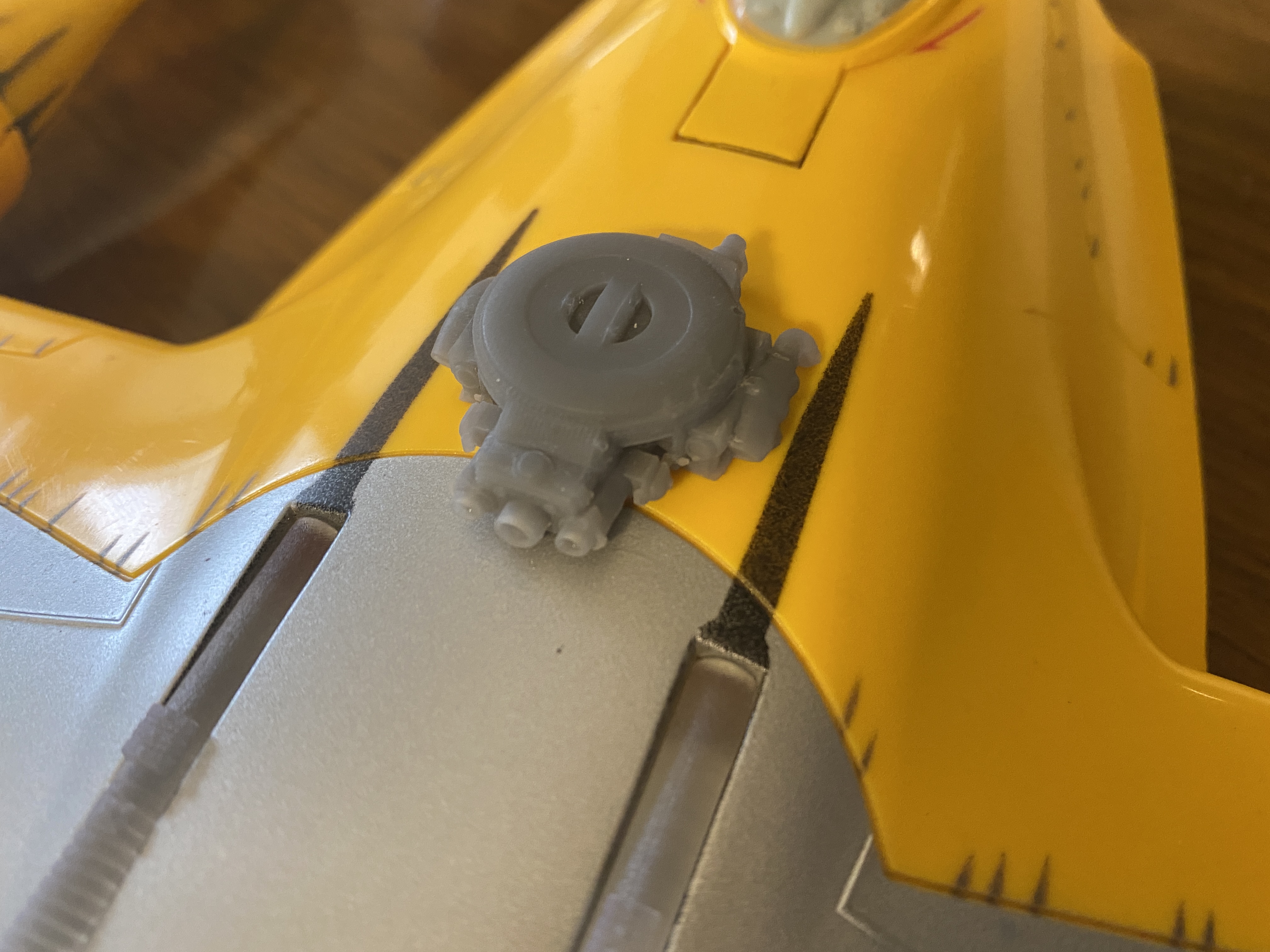 Next, I modeled the front of the engine. Here, I did have to "destroy" one of the nacelles to see how it was all held together. From that experience, I was able to get just the front of the other nacelle open in order to remove the cone and replace with the fan assembly. Here, the only hacking required was to open up the hole where the cone was held in. If the cone is swapped back in, the modification is not noticeable at all. (it's just loosely fit in the picture) 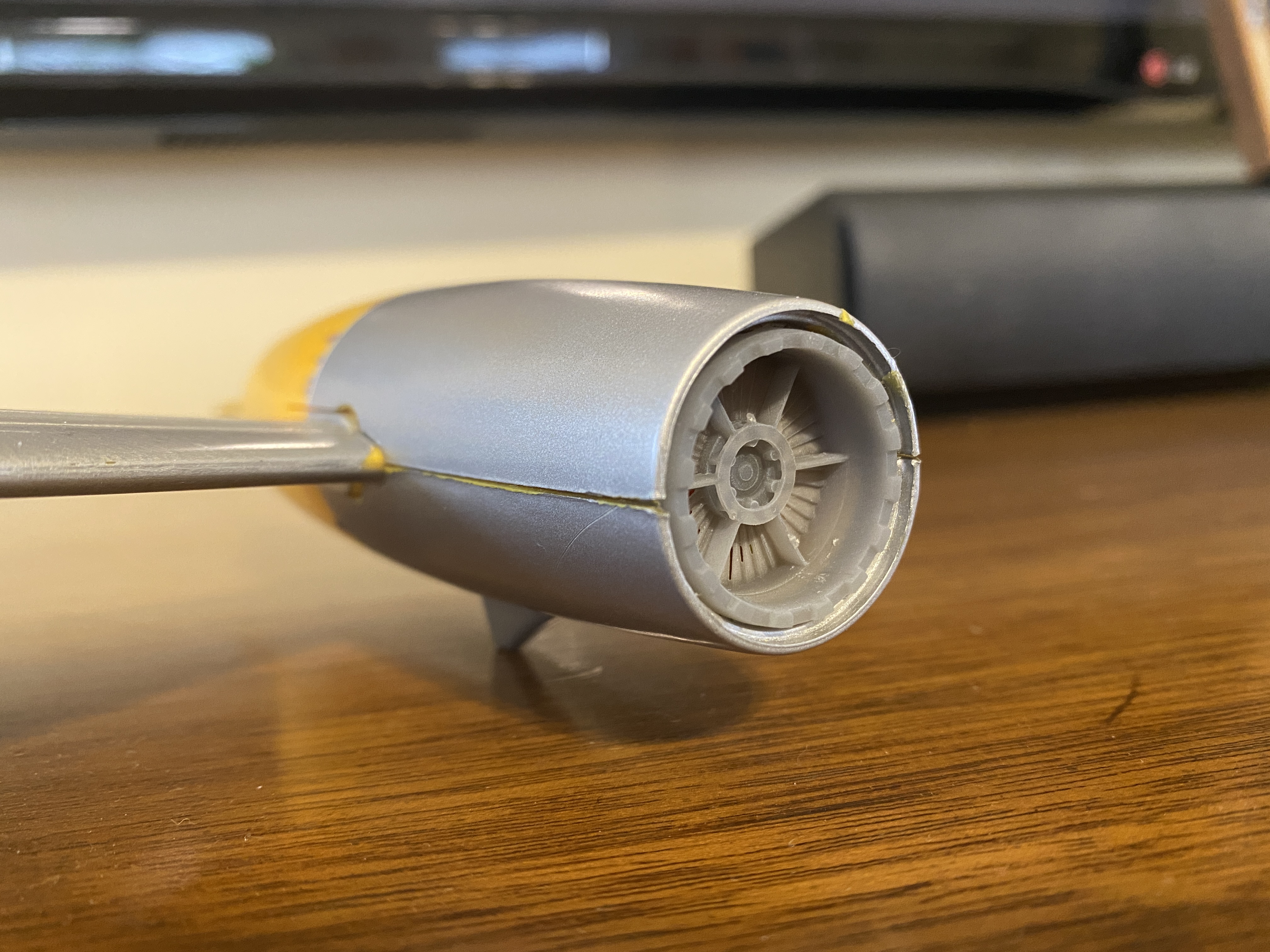 Next I worked on Grogu's seat. Getting the R2 out was a royal pain in the butt. I did manage to remove it without any visible damage to the ship or R2. It took a while to figure out how to do the dome. In the end, it came out great! 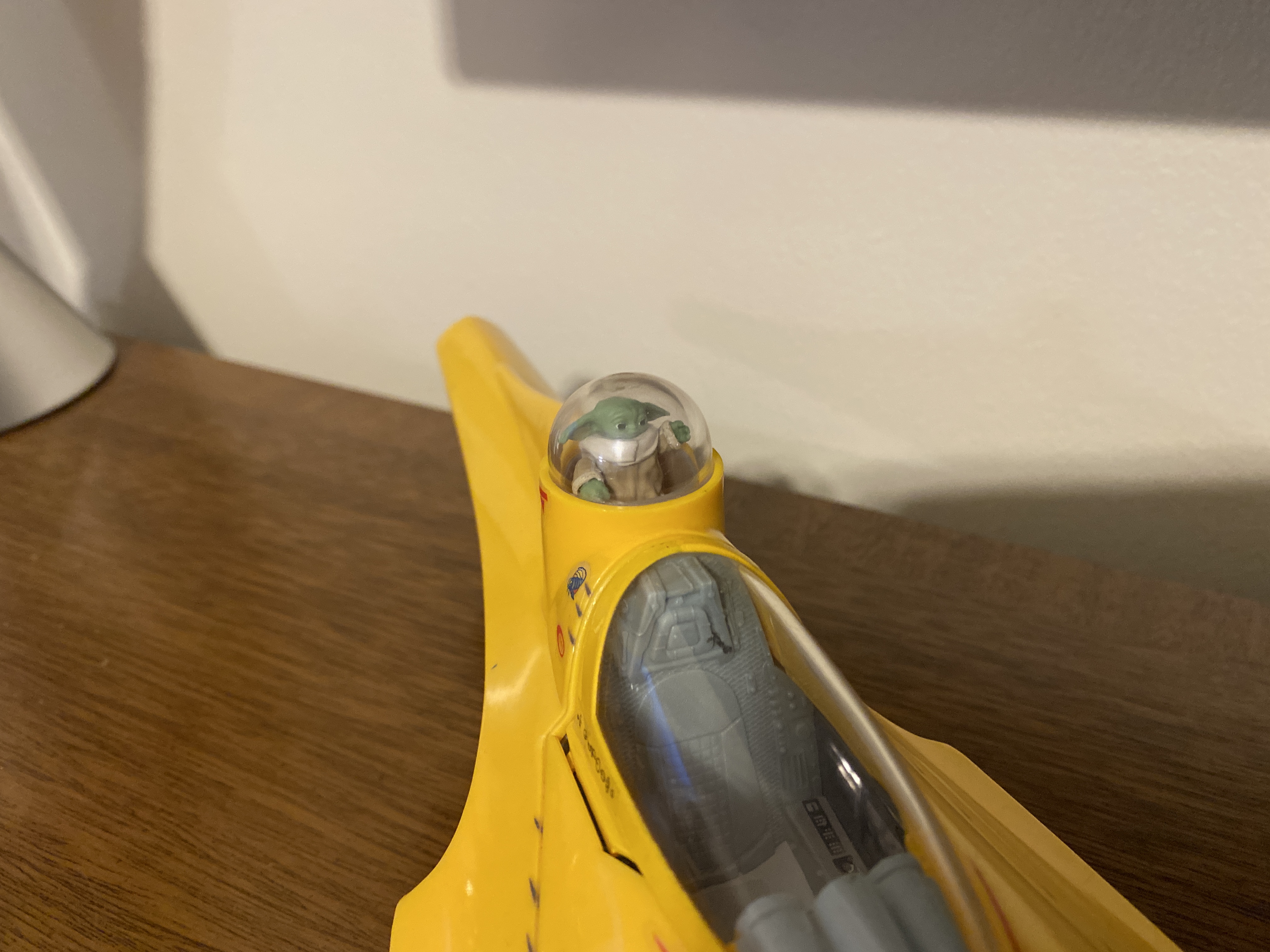 Once Grogu was finished up, I went to work on the tail. In the show, the section of exposed tail goes further up toward the front than where that point is on the toy. Otherwise, it looks pretty good in my opinion. 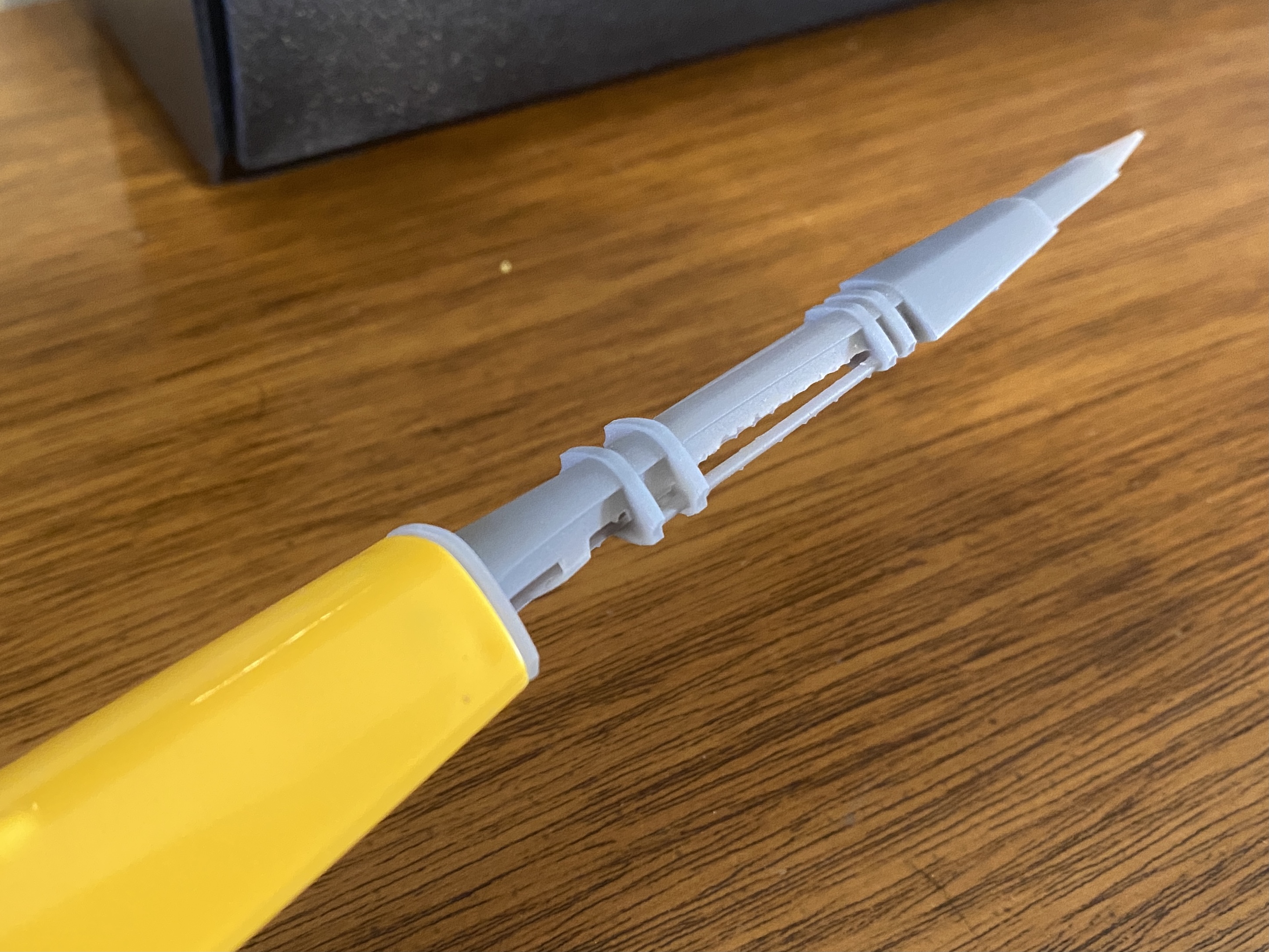 Work on the cannons were next. I modeled those up to mount in the same manner as the stubby toy cannons and printed them in clear resin so that the LED light will still be visible in strategically unpainted spots. 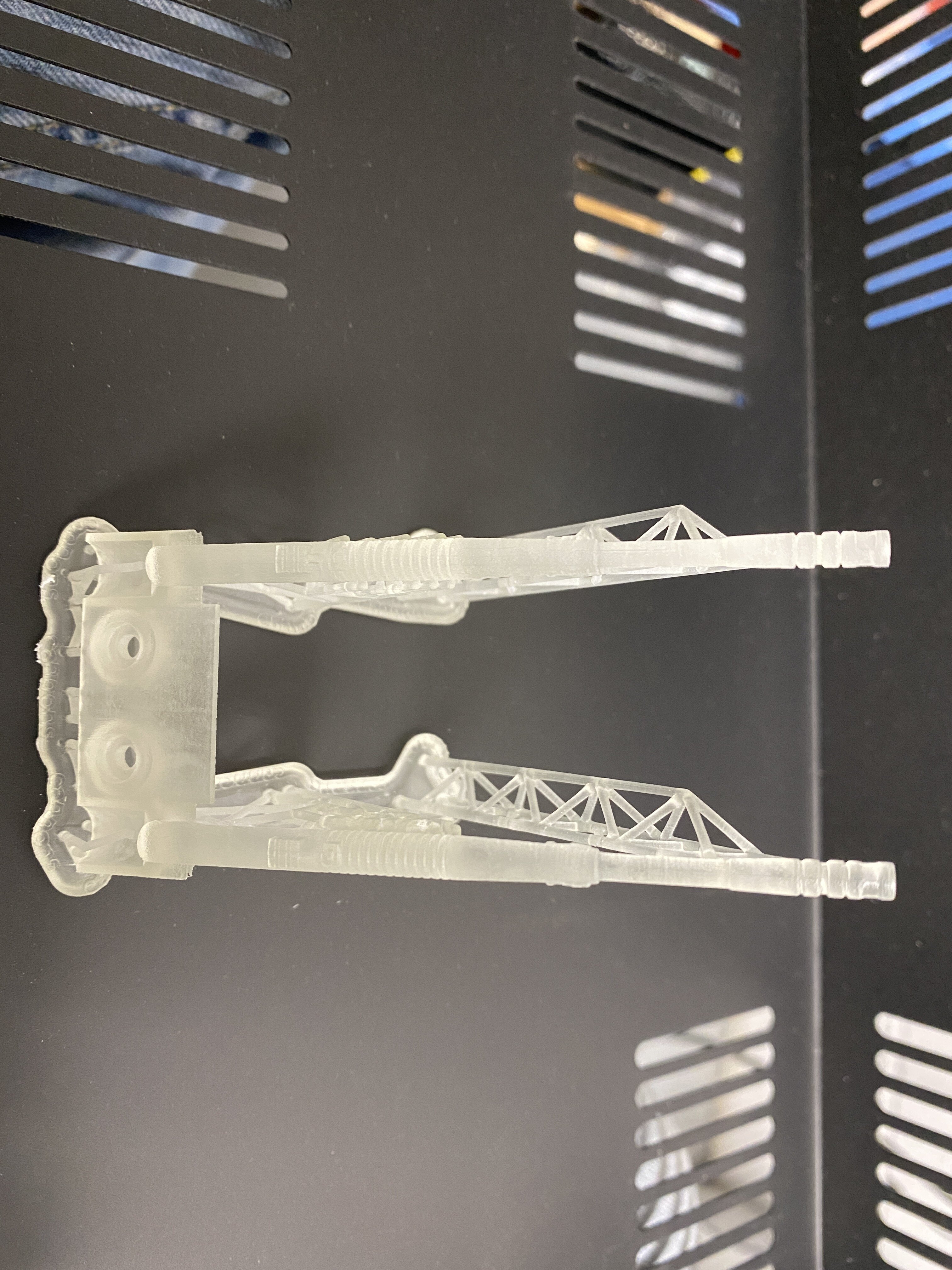 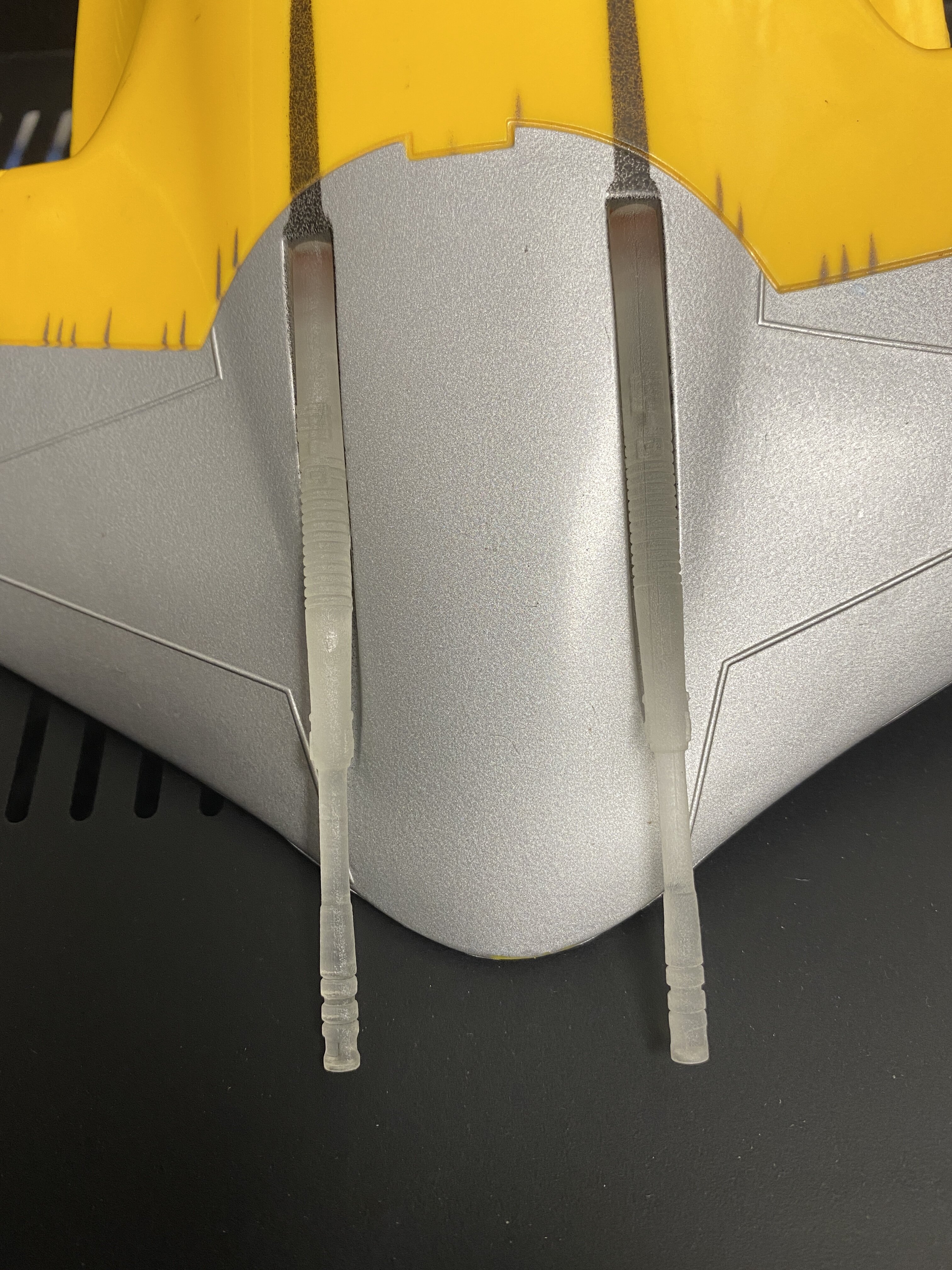 Here is where it's at at the moment. I'll be working on the leading edge details as well as the "engine compartment" details for in front of the canopy next. 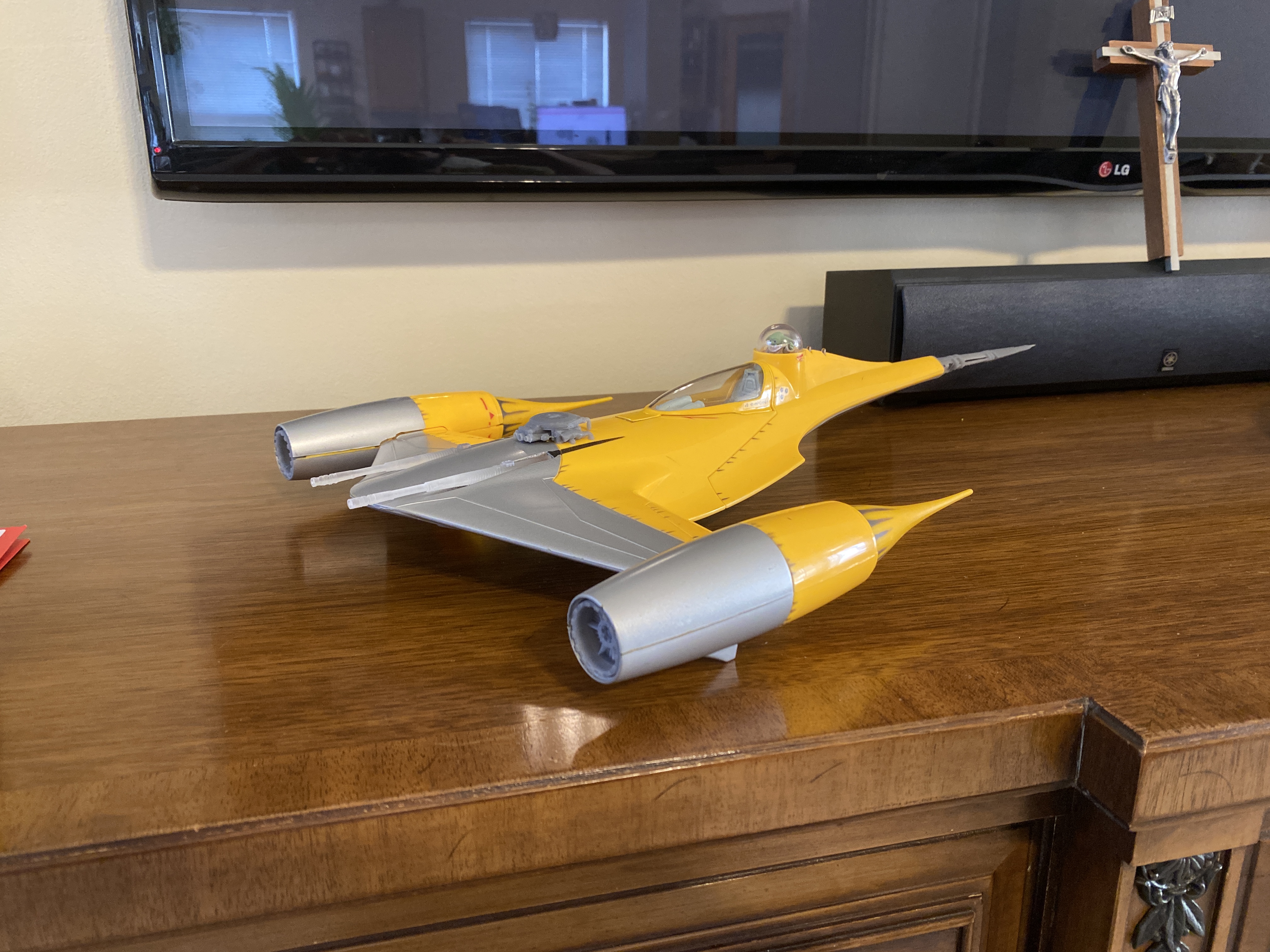 Awesome. I wish I could do this. I don't have a printer or the skills to sculpt anything from scratch.

Slowly but surely getting stuff done. Added some cowl area detailing. The section at the canopy hinge will be cut out to allow the figure to be put in/removed. 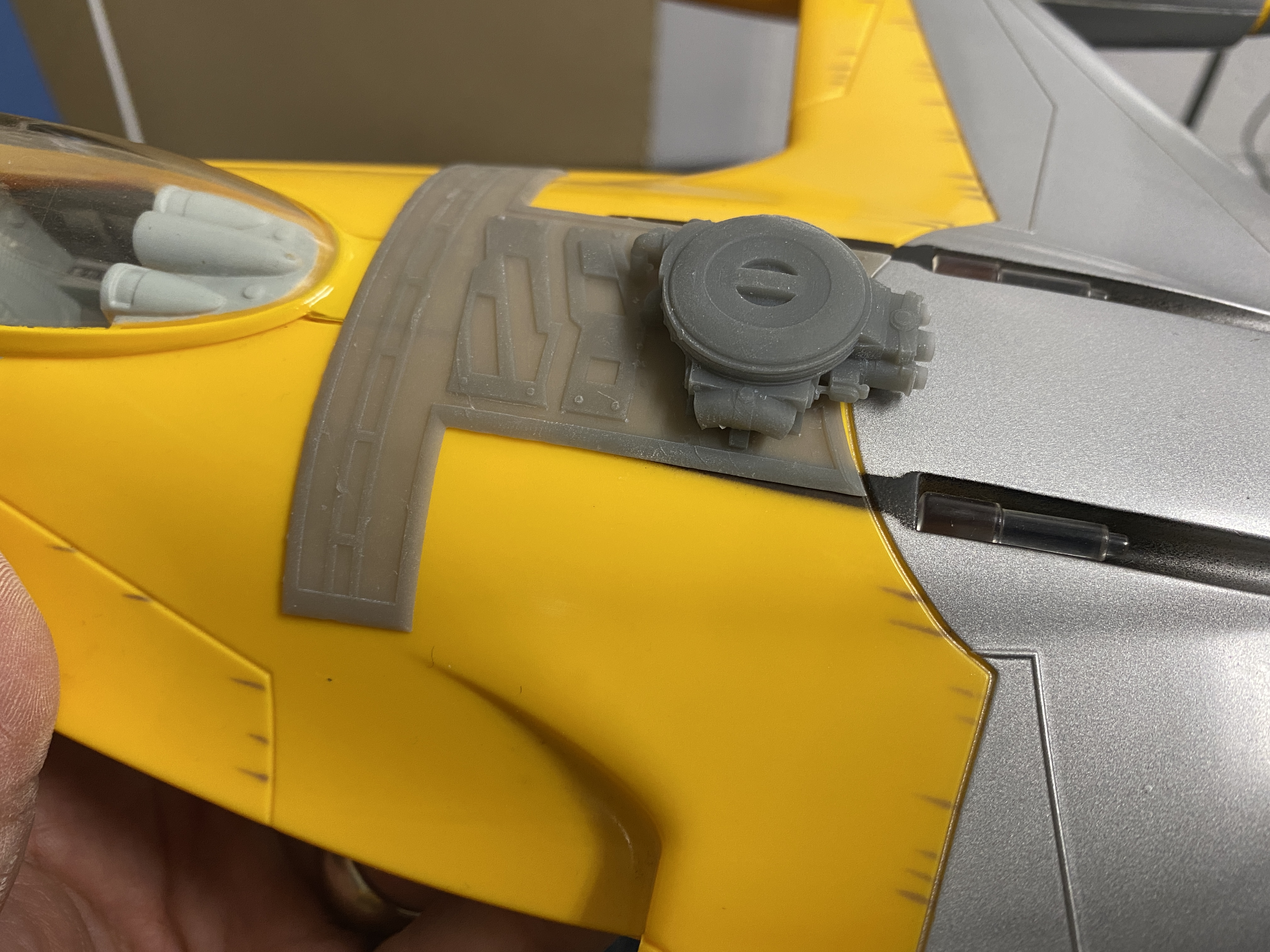 Progress has been super slow, but working on this whenever the opportunity arises. I finally got to the point I could get some paint on the ship. In keeping with the reversible theme, I sprayed a base coat of gunmetal plasti-dip and a top coat of plasti-dip metallizer. Being rubberized, it's not the prettiest finish, but still looks good displayed. I knew it was risky, but I used acetone to cut through the plasti-dip where I wanted yellow to show through. As expected, the acetone damaged the plastic, so so much for reversing the ship back to a standard naboo fighter, lol. 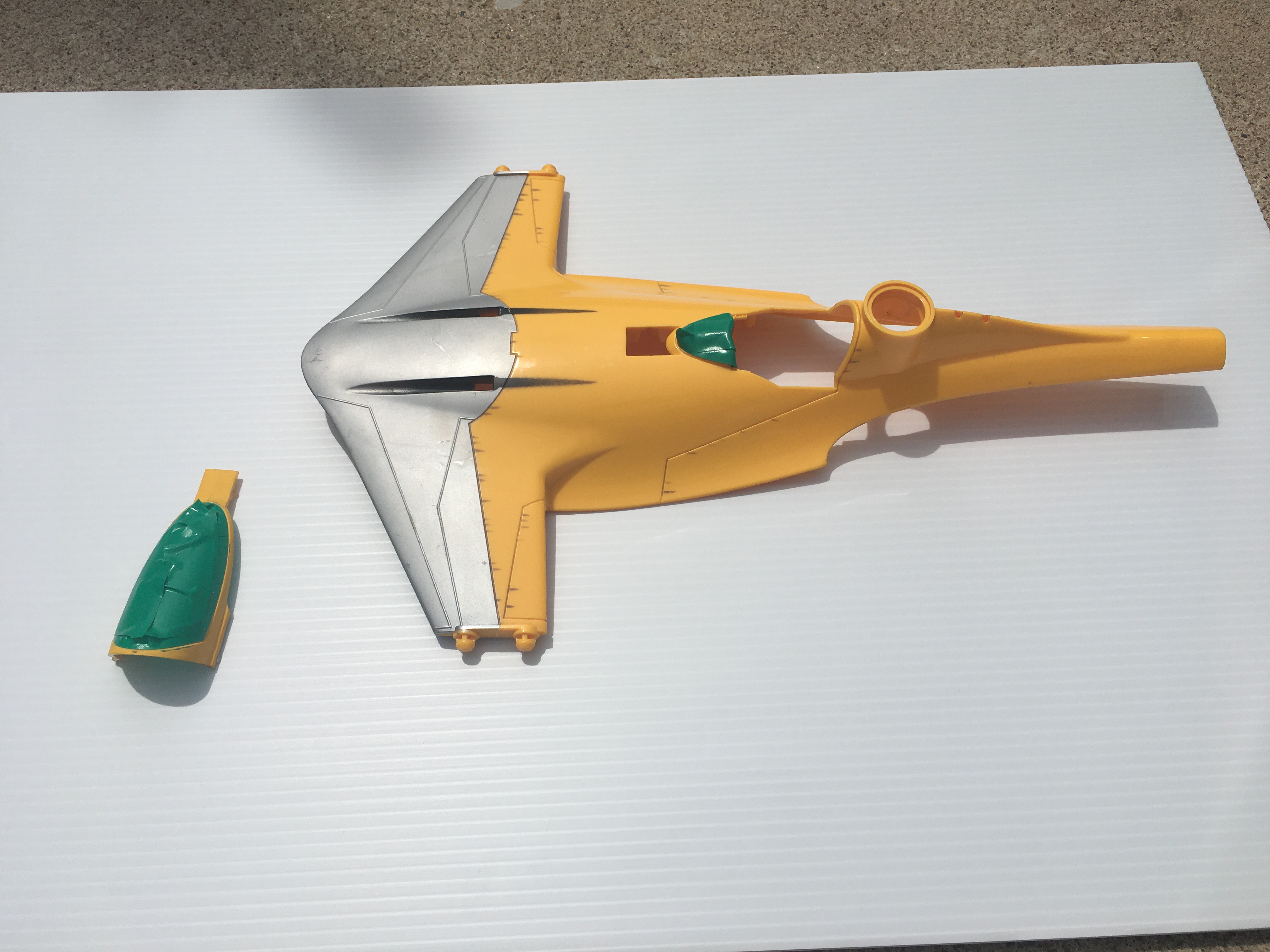 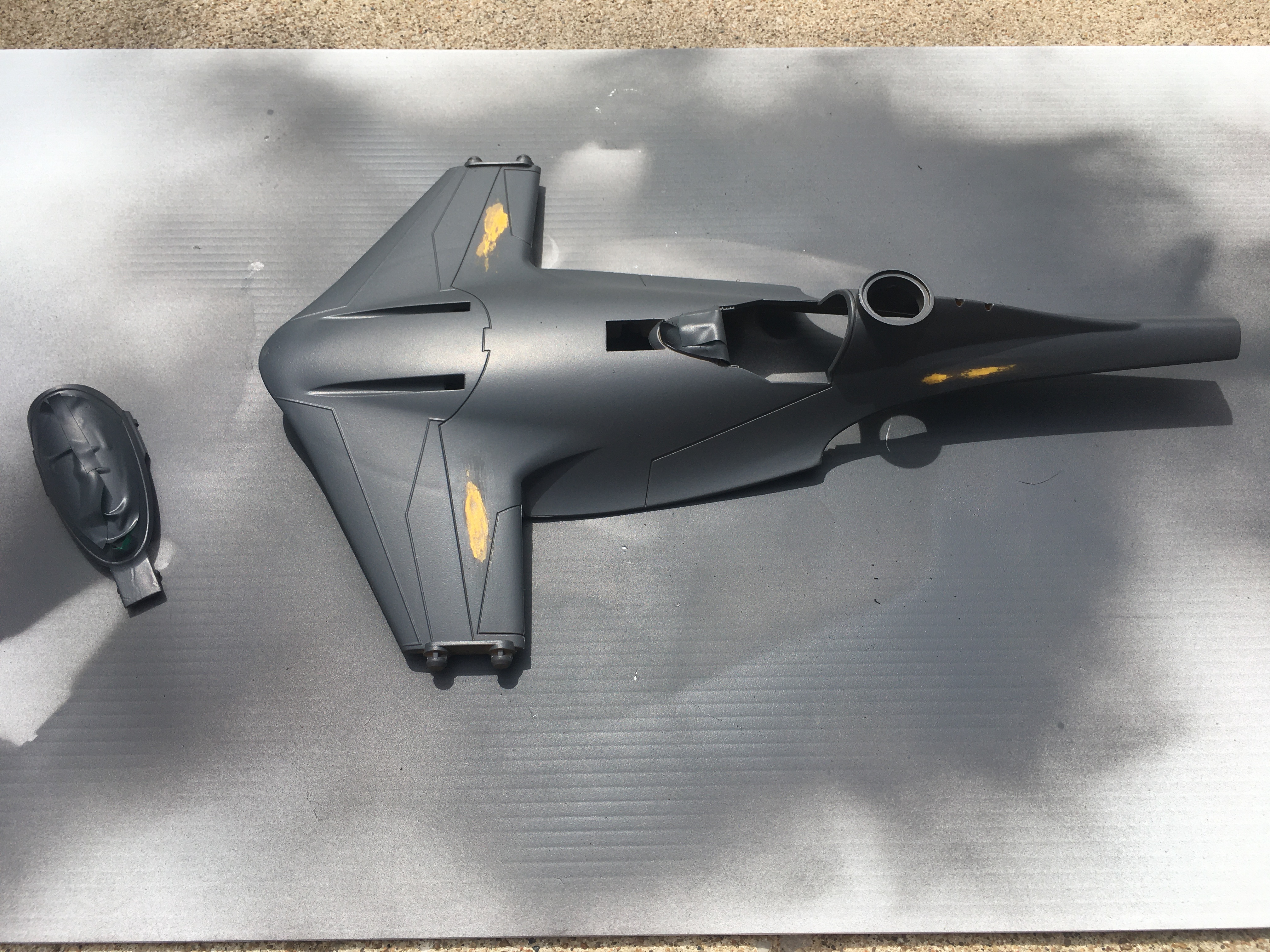 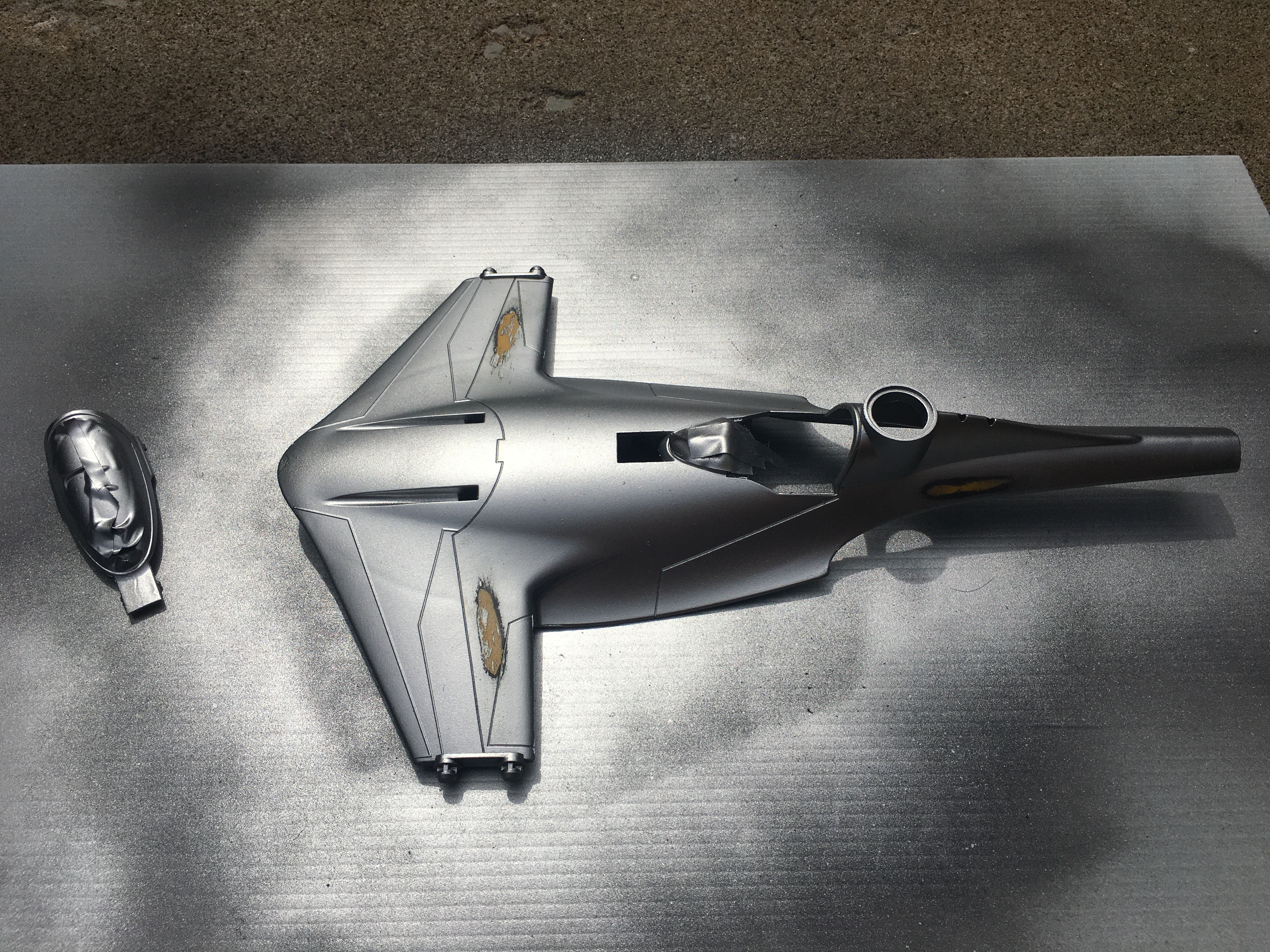 The stock LED cannon lights were pretty dim so I replaced them with high-intensity LEDs so that they would shine through the clear 3D printed cannons. I took video, but in the recording the old looks brighter than the new. Next we'll be painting the 3D printed parts and attaching them to the ship. I did some tests and CA gluing resin parts to plasti-dip holds fantastic! 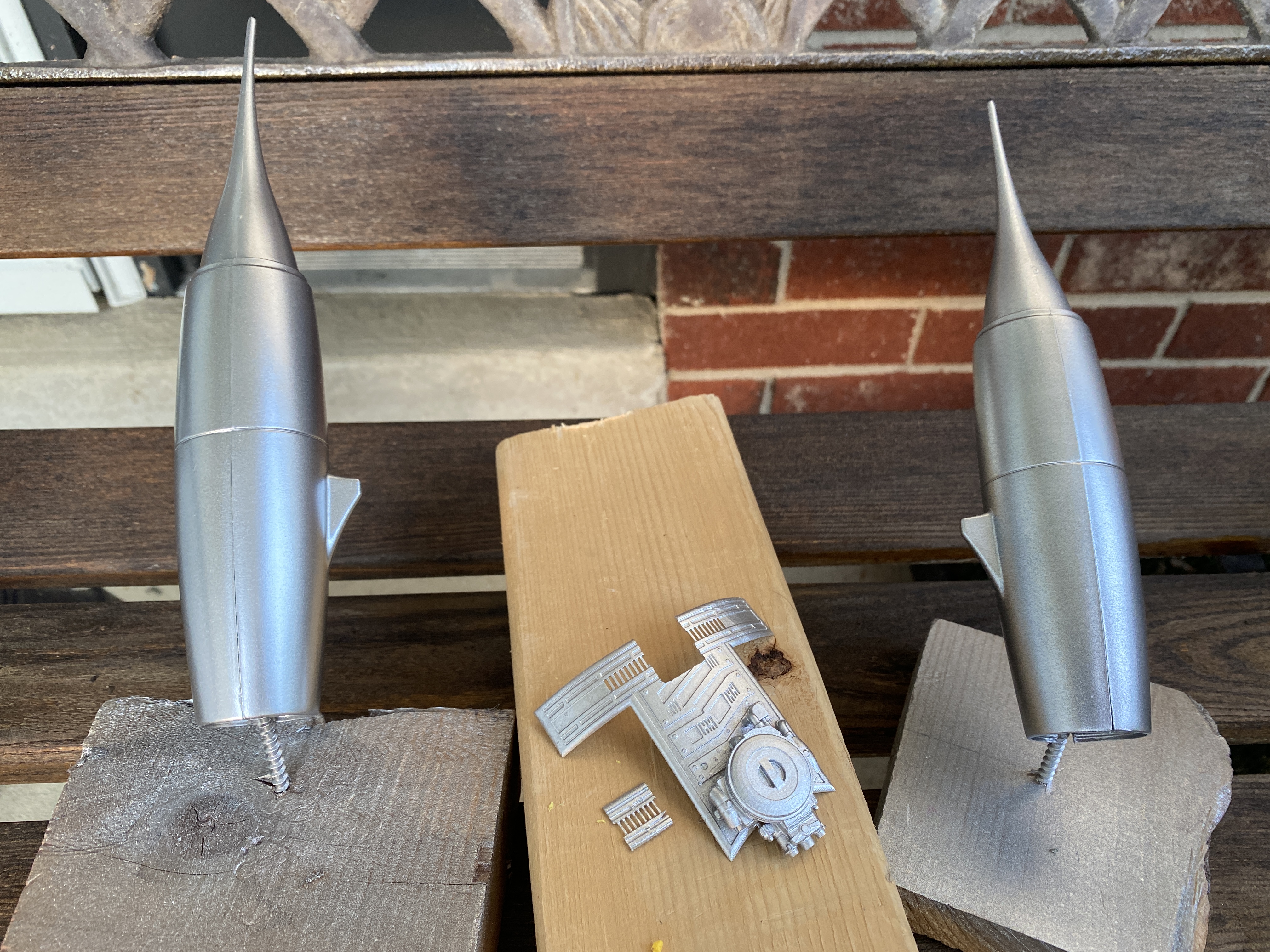 Engines and turbonic venturi modified and painted with plasti-dip. 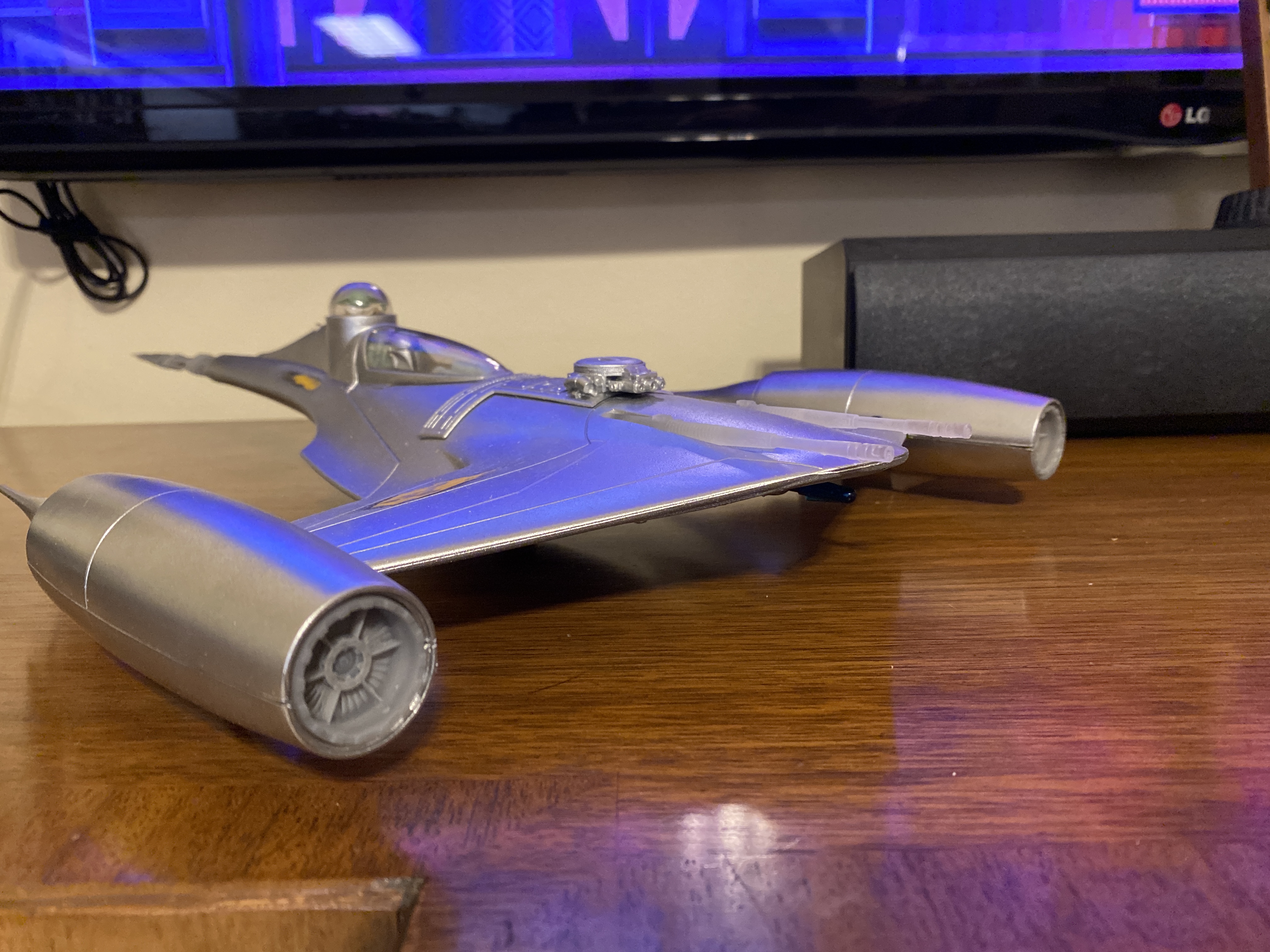 All of the plasti-dipping is complete. Just need my super talented wife to help out with the detailing and weathering.

If you use Plasti-Dip for another project and want to achieve the same "look"; try to rub it off the plastic with paint thinner.
It's less aggressive than acetone

Surprisingly, plasti-dip is some pretty tuff stuff. The acetone had a pretty hard time cutting through the cured finish. Have to pretty much rub through it while still wet. I'll give the thinner a try, though.

Gave the thinner a try. It gets through the top coat very nicely but the rubberized coating not so much.

Well, even though it's lacking in a lot of details, we're super happy how this came out. I will definitely need to model the belly engine and the engine nacelle greeblies and fix the tail details now that there are a lot of good reference images from celebration in Anaheim. 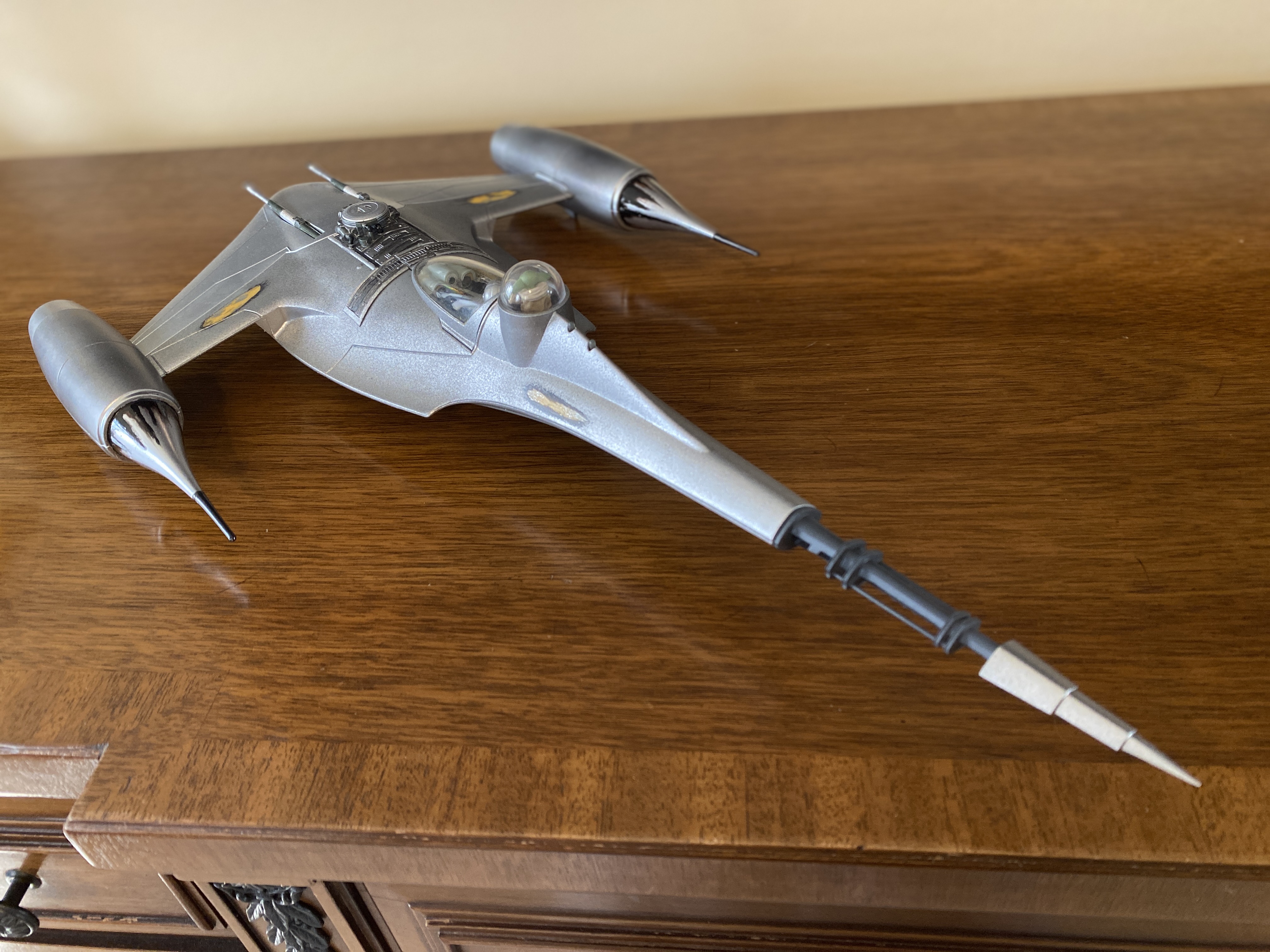 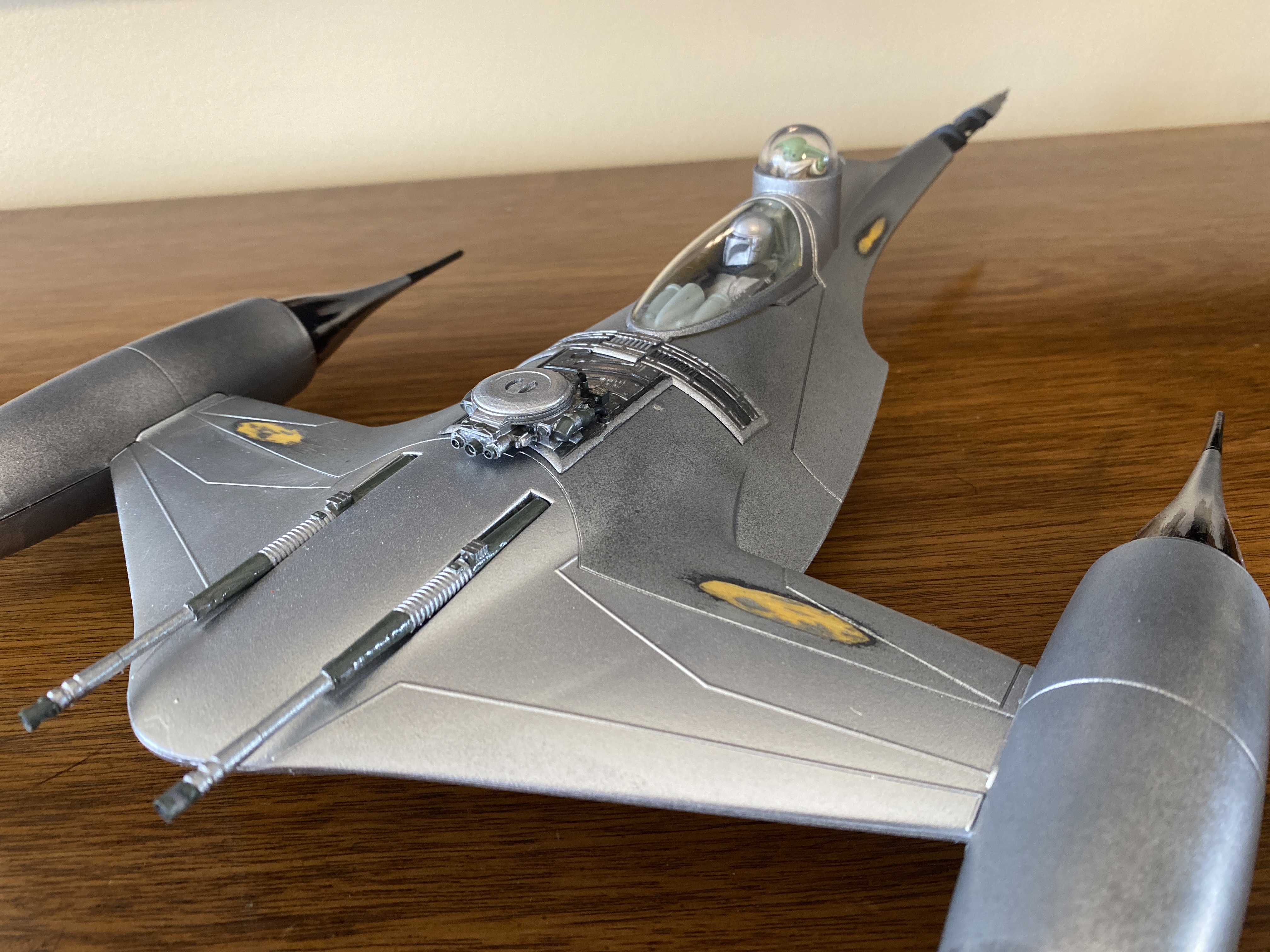 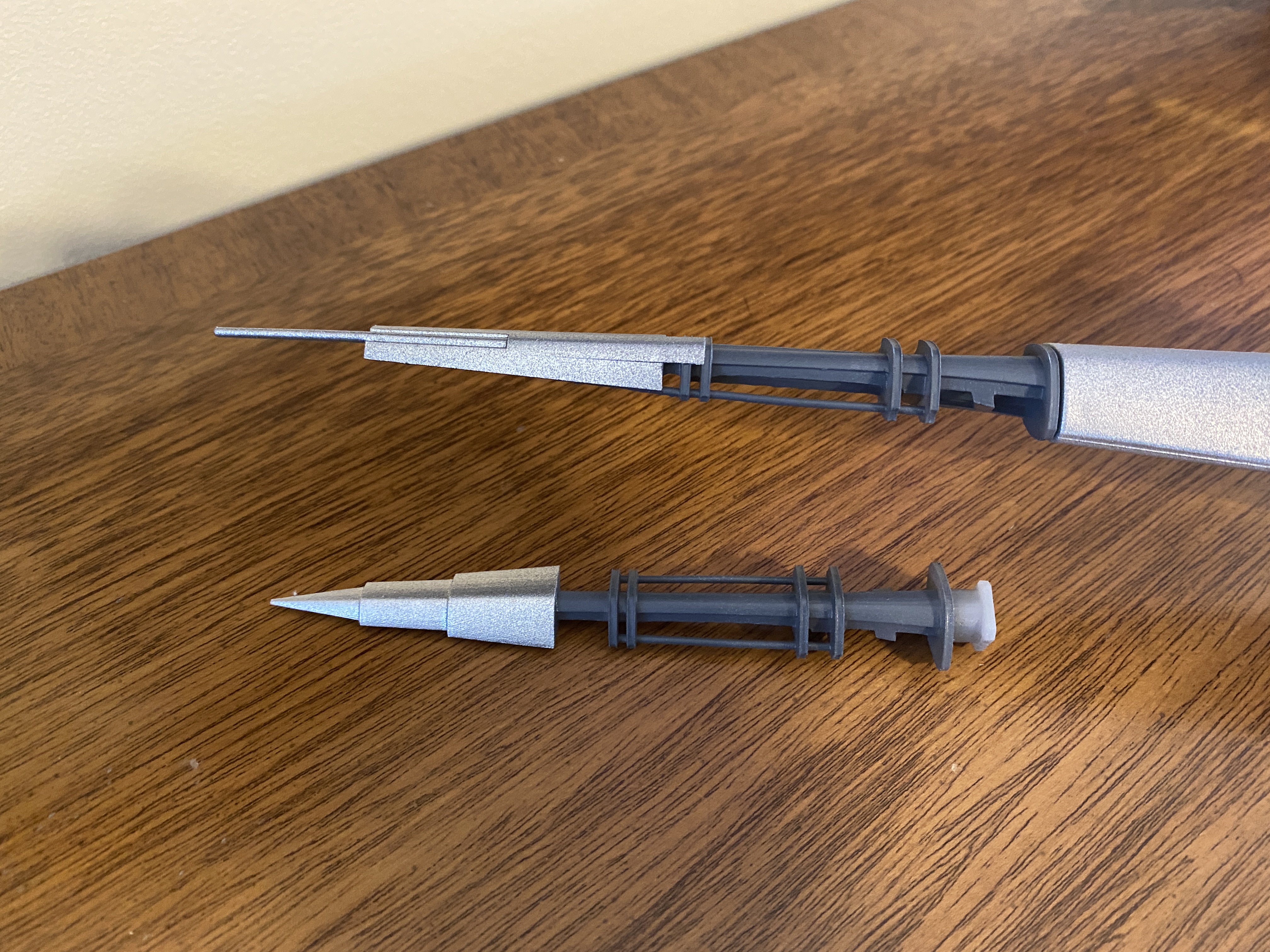 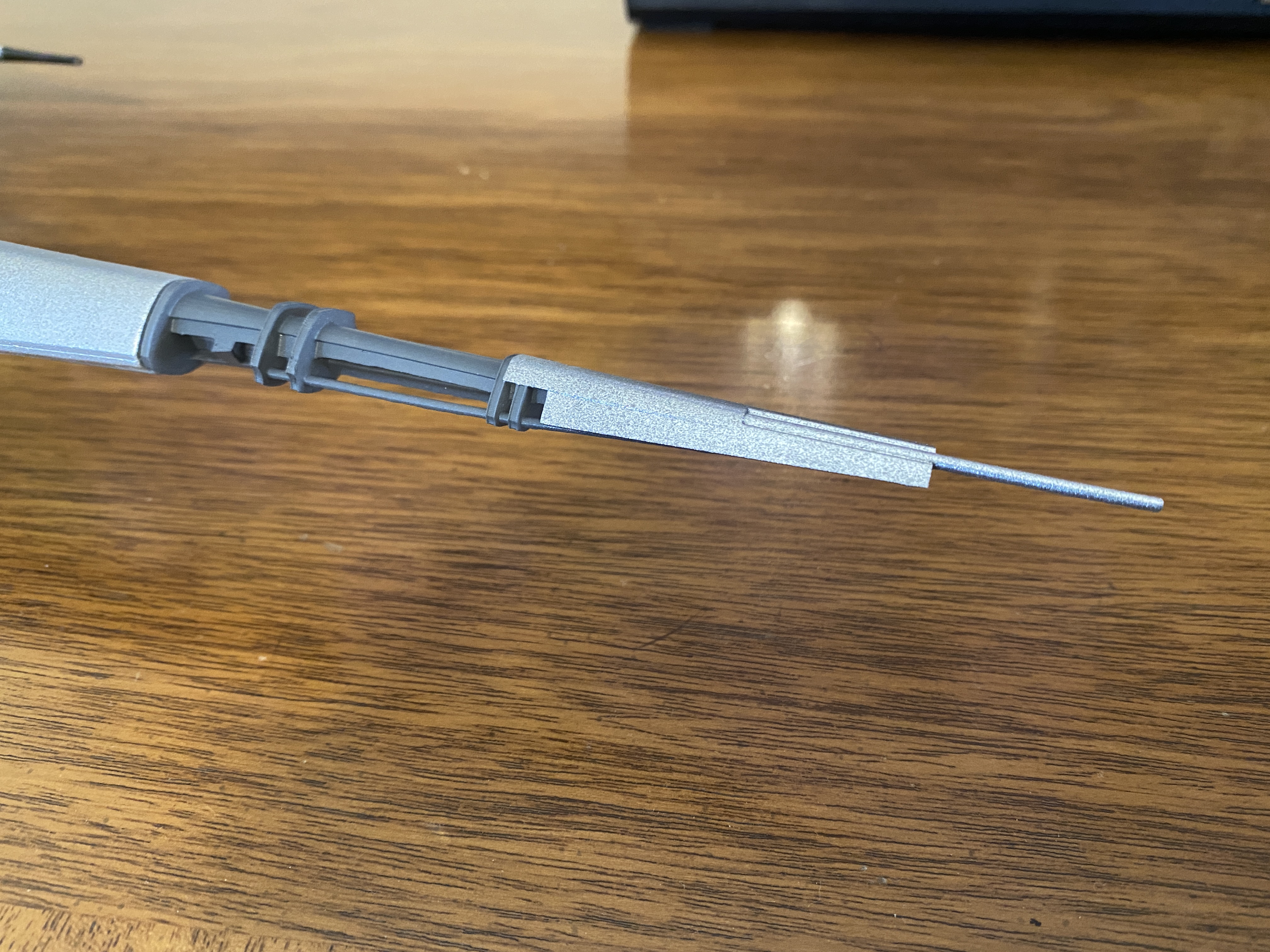 Well, this was almost as time consuming as the turbonic venturi assimilator to model, but just about there on the bolt-on belly engine. This hooks into the speaker grille then screws into existing screw holes. Screw heads have to be ground down a little to get them to fit. The cool thing is that the sounds seem to be amplified with this thing attached. I made an opening out the back of the engine for the sound (and just maybe light!) to come through. Next I'll be working on wing engine lower sides greeblies. Thanks everyone for your comments and likes! 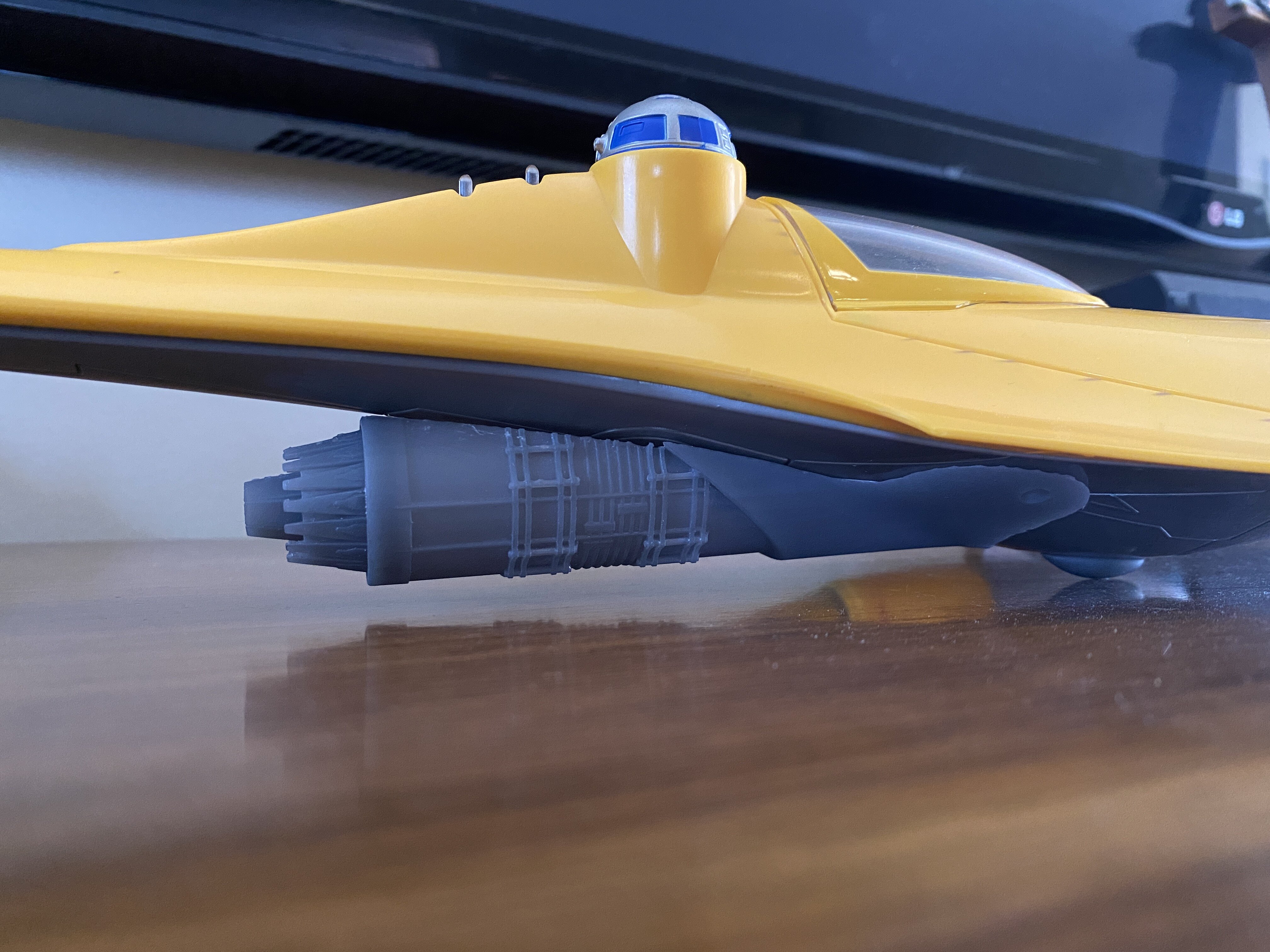 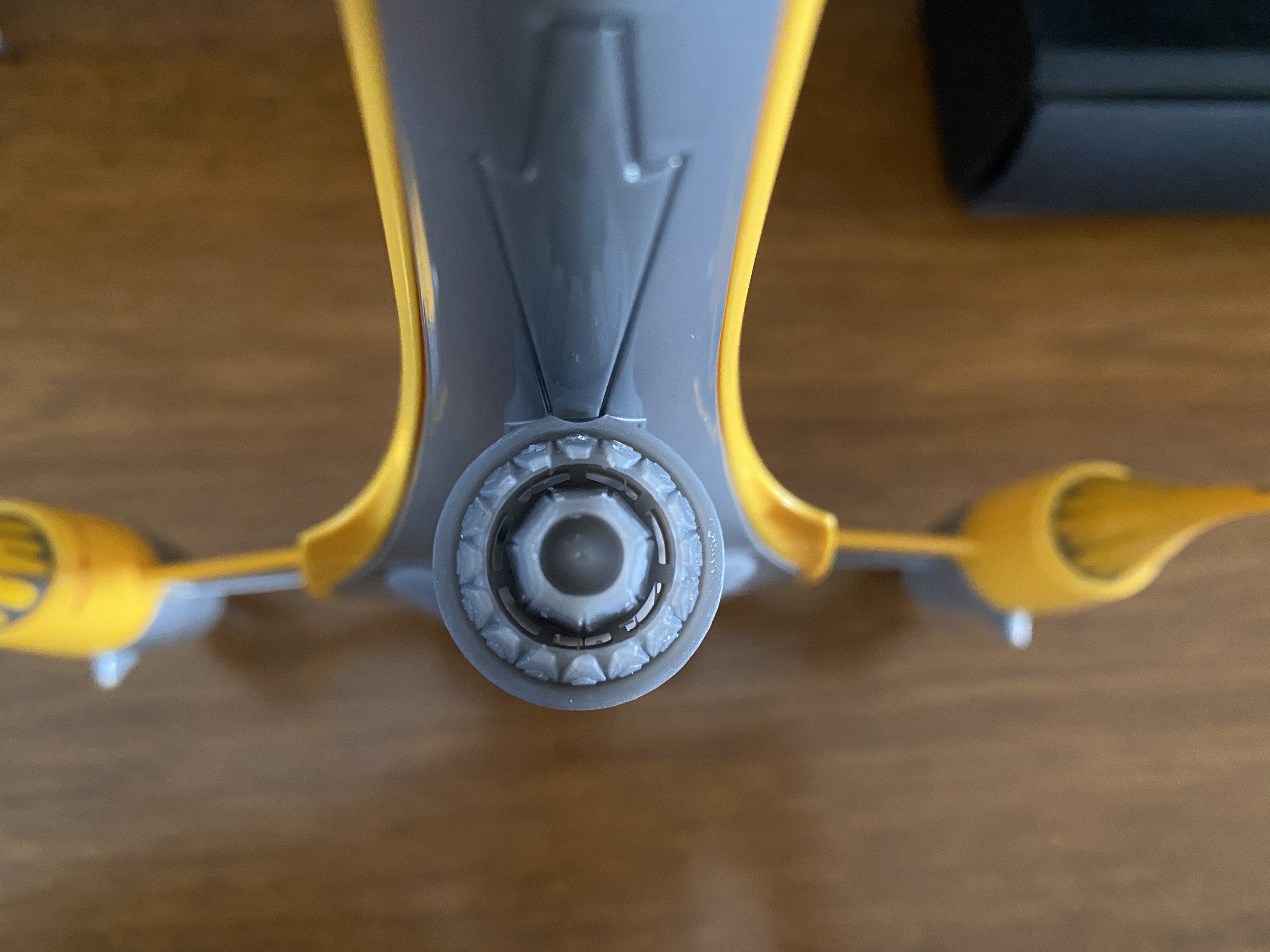 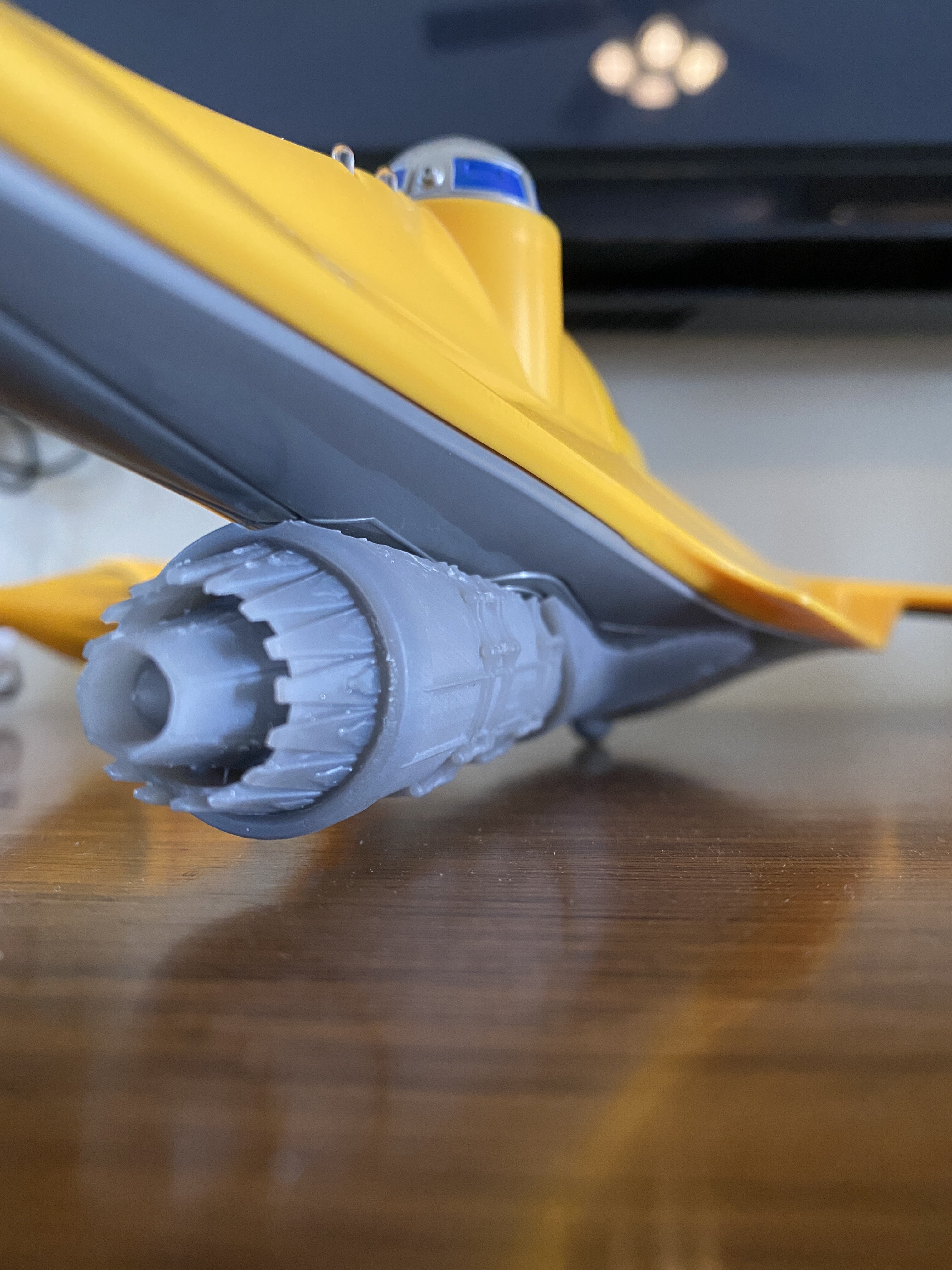 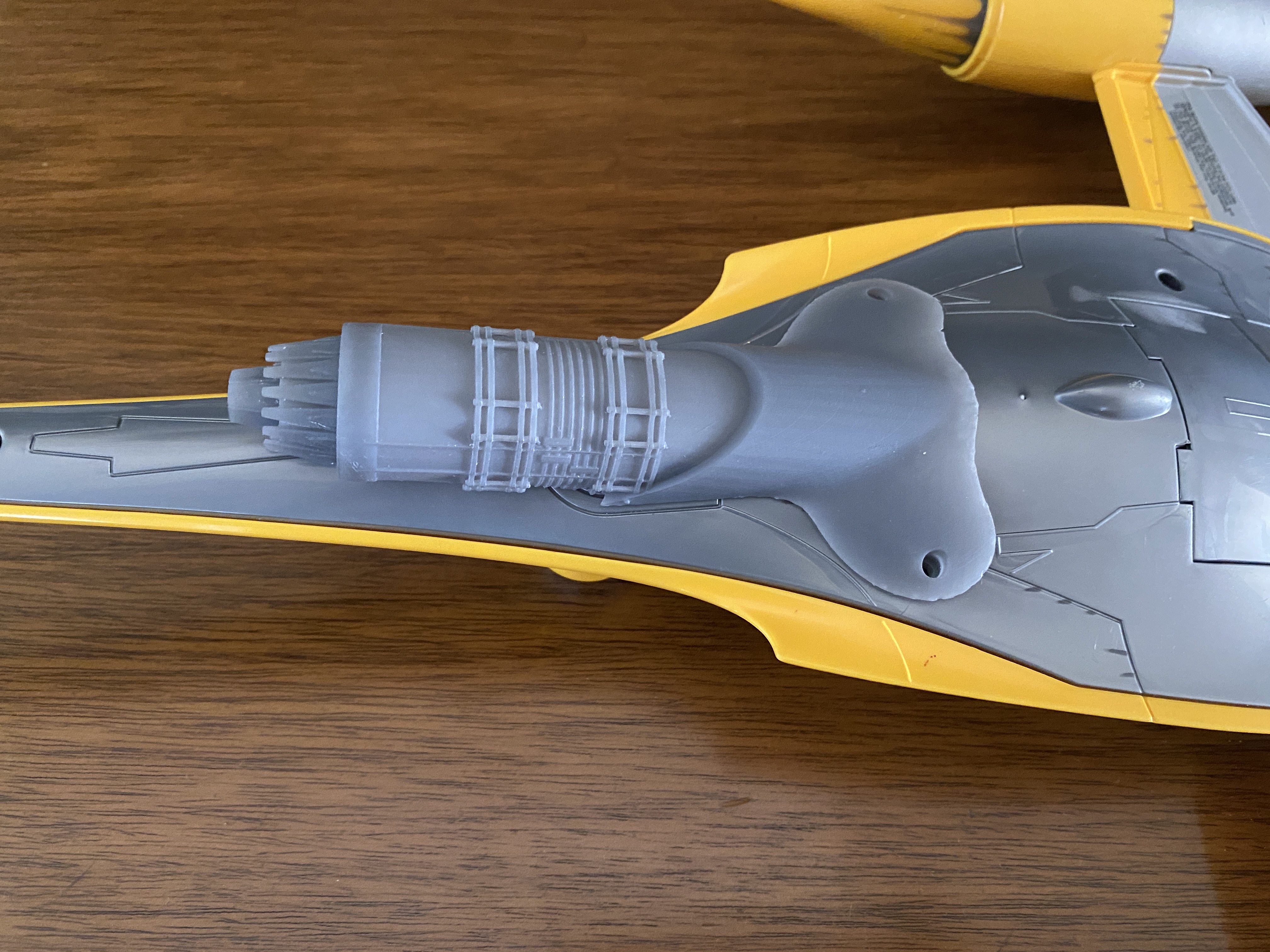