Anime 101 for beginners. Help me find a series for me and my daughters during covid.

I'm trying to find an anime series me and my daughters could watch together. If we could all be excited every night to watch something together it would be wonderful. They are 10 and 11 years old, they still get scared so nothing too scary. Sexual stuff will make us all feel uneasy so none of that. They are ok with some gore. Give me your top 3 plus one movie. They need to be dubbed in English and easy to stream.

Here is what we've seen over the years:

All studio Ghibli (even grave of fireflies)

Attack on Titan (too scary for them)

Sailor Moon (none of us could get into it)

My little pony (they loved it)

Pokemon (hard for me to watch)

Thank you for your suggestions and time.

Here are a few, although you should teach your kids to view anime in the proper form, subbed. My teenage daughter will only watch anime subbed and plays the game Persona 5 in Japanese.

Anyhow, here are some suggestions:

Konosuba
Re: Zero
Rise of the Shield Hero
Isekai Quartet
Goblin Slayer (this one is a touch on the mature side)
Demon Slayer
Bofuri: I don't want to get hurt so I'll max out my defense (really enjoyable if you're a gamer, esp. if you play or have played MMOs)
Overlord (very dark and has a bit of fan service in it, no nudity though)
The Netflix Ghost in the Shell
Drifting Dragons
Is it wrong to pick up girls in a dungeon (very deceptive title, the show has nothing to do with picking up girls in dungeons)
Riding Bean (older title from the '80s, lots of fun but with some (brief) nudity and a really reprehensible villain) 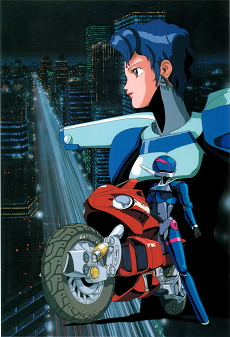 It can be difficult with anime for children. Too many of the most popular anime have sexual connotations and a lot of violence.

I think Re:Zero is too scary. It's an isekai about a boy who dies to wake up earlier to relive the same event and do things differently until he survives. People get killed, mutilated, erased from existence.
Goblin Slayer has much violence, and implied rape.
Ghost in the Shell (any incarnation) is definitely for grown-ups.
Konosuba is funnier if you're older and have seen other anime, I think, and it is a bit ecchi.

I would recommend Cowboy Bebop if you haven't seen it.
Last edited: Jul 28, 2020

I think a lot of shows that were/are aired on Cartoon Network's "Toonami" block would be a good fit for what you are looking for in terms of accessibility and age and family appropriateness. Some of them were:
-Cowboy Bebop. There's some Fan Service, but no real Nudity.
-Ghost in the Shell: Stand Alone Complex. This series is definitely more parred down from the Ghost In The Shell movies and is more accessible in terms of philosophy, violence, and only implied nudity.
-DragonBall Z. A classic that is still popular and still going under the "DragonBall Super" imprint.
-Naruto. Another classic that remains popular with kids and is still ongoing in a new series, "Baruto."

Some non-Toonami ones:
-Escaflowne was an anime that aired on Fox Kids, back when there like Saturday Morning Cartoons, and is a Mecha Anime, but in a more medieval setting with Giant Knights/Suits of armor instead of Traditional Mechs/Robots, whose main protagonist is a "normal high school girl" who gets sent from "our" world to the world of Escaflowne, so, your daughters might appreciate having a more relatable main character?
-Avatar The Last Airbender. Not a traditional "Anime" as it was made by and aired on Nickelodeon, but it is a great show and is on Netflix now.
-Netflix's Voltron. Like Avatar, it's not a traditional Anime but it's good. I admittedly only watched the first two seasons, but it is very popular with The Youth.

Well,I know you're looking specifically for anime, & although influenced by anime, it's NOT anime, but I can't recommend AVATAR: THE LAST AIRBENDER highly enough. My kids & I watched the original airings on Nickelodeon back in the day, & it was exactly what you described wanting. We couldn't wait for each weeks new episode.

Then when you get through those, there's a sequel series set several years after the first story, that doesn't drop the ball in either story quality or production.

Could be a good opportunity to discuss the influences of anime on western storytelling & animation.
U

We started last air bender, seems to be perfect so far. Also started Cowboy Bebop, they were not into it but I liked it and will watch on my own.

Couple very long series you can really get into if you like them.

One Piece, Straw Hat assembles a crew and embarks on a mission to become the worlds most famous pirate and discover a hidden treasure of immense power. More action comedy oriented. Very long running series. -
Hunter x Hunter, Gon embarks on becoming a Hunter and to find his missing father Ging. Hunter's however are a licensed social class of powerful Nen users combining martial arts with superhuman abilities they obtain by learning to unleash and control their inner auras -
Also some older classic series:

Samurai Champloo from the guy behind Cowboy Bebop. It's pretty much Cowboy Bebop in feudal Japan -
Desert Punk, post apocalypse action comedy series with a bit of fanservice but no nudity -
Trigun - Space western series, action comedy oriented -
Outlaw Star - One of the inspirations behind the Firefly TV series -
Maybe a little more adult oriented:

Black Lagoon, a criminal mercenary outfit working out of Thailand deal with their newest recruit, a white collar businessman from Tokyo -
Jormungand, A weapon merchant and her entourage of bodyguards embark on a subversive operation to end the modern arms industry as the world knows it -
Gungrave, mob betrayal leads to the seemingly supernatural reappearance of one of its leading enforcers -
Tokyo Ghoul, no vampires in Tokyo, but a pretty intense Ghoul problem -
Darker Than Black, two spatial anomalies appear on earth granting random individuals seemingly random super powers who became known as Contractors due to the fact each must pay a toll to continue to use their new abilities.
Hellsing - An unofficial continuation of Bram Stokers Dracula, the Vampire Alucard has contractually bound himself to the Hellsing family after his defeat at the hands of Abraham van Hellsing working as the 'Trump Card' for the Hellsing Organization against paranormal incursion against England.
Last edited: Aug 26, 2020

The original Furi Kuri aka fooly cooly or flcl from around 15 years ago is really fun. There were sequels released a few years ago and they weren’t that great.

If you have access to Crunchyroll I would highly recommend Natsume Yuujinchou, which is about a boy who can see spirits and monsters and has to deal with the hardships that entails. Though it has a monster of the week feel for most of the episodes, there is an overarching story and progression. There are 7 seasons and seasons 1-3 are grouped together on the platform while the other seasons have their own listing.

They are not dubbed, but they don't speak fast, so it is easy to follow the subtitles.

From the same guy who created One Punch Man, his second series Mob Psycho 100. A frail, emotionally muted boy is also an extremely powerful Psychokinetic whose powers exponentially increase when he feels emotions. Comedy series.


Sword Art Online, a brand new virtual reality MMORPG is about to hit the market with 10,000 players getting early access to the game. Shortly after logging in players discover they are not able to log out and that dying in the game or being forcibly disconnected leads to death in real life. The only way to escape is for players to ascend to the last floor of a 100 floor dungeon and defeat the game's final boss, however players soon form their own factions and turn on each other in the hopes of survival rather that working together.


Claymore, medieval fantasy setting, provinces throughout the land are routinely plagued by demons called Yomi. When Yomi appear a special class of warrior is called upon to deal with the problem. These female only warriors are called Claymore's due to the swords they wield. The secret of their super human powers lay in that they are infused with Yomi energy to become half demon themselves, becoming social outcasts.

Space Battleship Yamato 2199. This is a remake of the original 1974 series. It is the same story, but with way better animation

It is a great sci-fi/space adventure story and pretty much like the "World War II battles in space" aesthetic that Star Wars was built on, It is on Funimation as well as other streaming services

astroboy said:
the original Macross series is probably the best space opera out there
Click to expand...

For all ages, perhaps. The original Legend of the Galactic Heroes series is a masterpiece although much more adult oriented. There is no english dub of the series at the moment. Original Japanese trailer.


In recent years the series has so far released two seasons of a reboot, which looks absolutely amazing. My only complaint is that they have truncated the original series and skip over huge swathes of storylines and character development. But it is amazing to look at and people who haven't watched the hundred and some episodes of the original won't notice.


EDIT: Also found this interesting video on why people new to anime should watch Legend of the Galactic Heroes, original series.

Not sure if you are still looking but a lot of these recommendations seem quite mature. It think we need to first know what sort of stories interest you. Comedy? Long running stories? Overcoming tragedy?

Naruto: not too violent but has action and humor.

Inuyasha: seemed to have been very popular with girls but also has action which may be good for you.

there are also live action adaptations of anime like Hana Yori Dango which is a high school love story your kids might like (but could be a little too early). It’s like gossip girl but far less sexual (most extreme PDA is kissing).

Definite avoids until later
Evangelion: great but not for 10 year olds
IWGP: amazing story, one of the best Japanese tv dramas but dark story.
Death Note: no “action” but great story but about planning.
S

big one missing from these suggestions so far is Fullmetal Alchemist: Brotherhood

My Little Pony - THE MOVIE! (From the point of a guy who has never seen MLP before!)

While trawling the depths of my computer, I found something.