I would like to dedicate this build to my friend, colleague and fellow R2D2 cohort, Grant Imahara. His unexpected passing really sucked the wind out of my sails on posting this. Grant, Fon Davis, Billy Brooks and I were racing to finish our R2s this year – And we made it!
We just thought we’d have more time to share them in the end.

Here’s to his memory…. 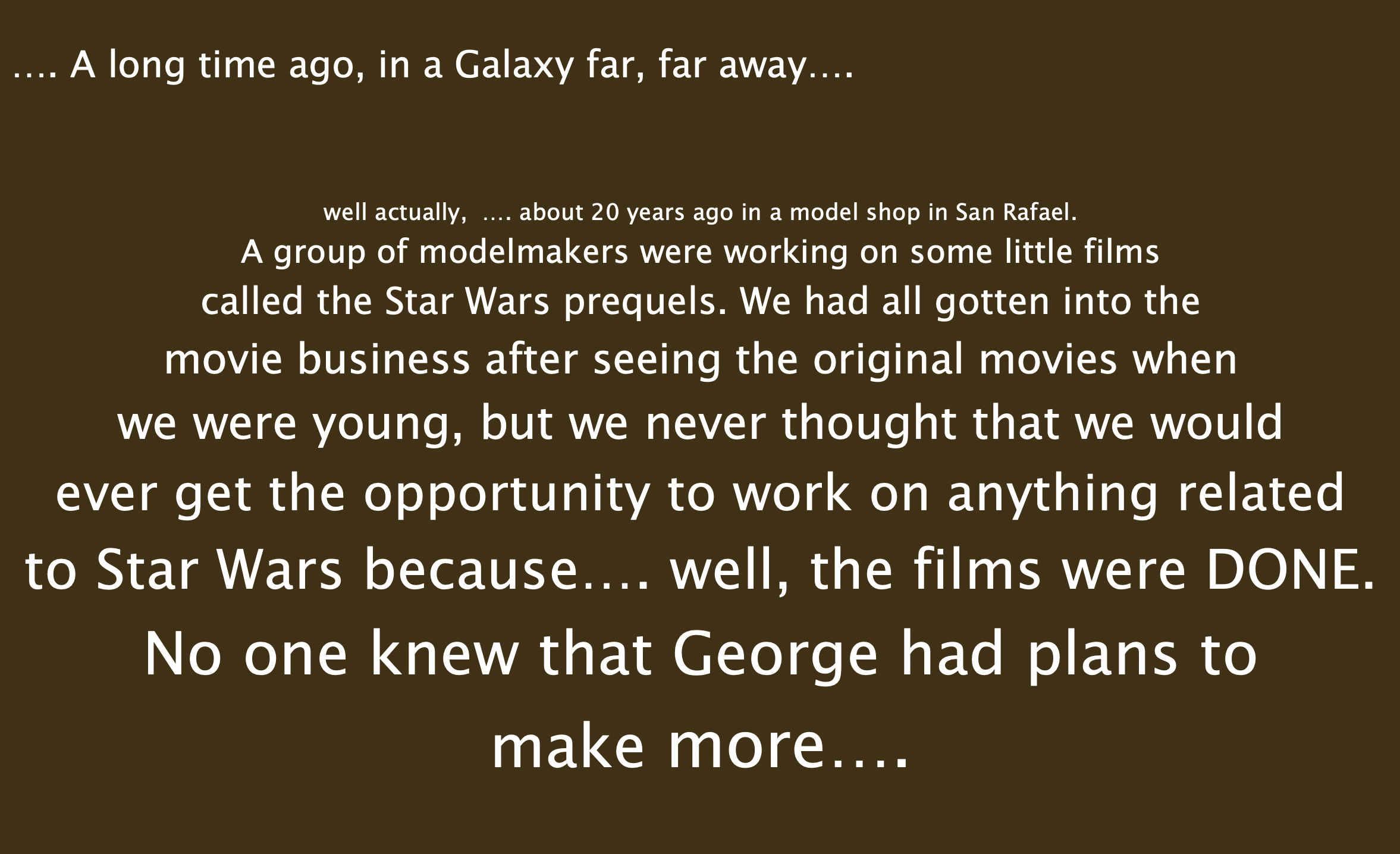 So there we were - kids who had grown up on the original films, now employed at ILM, working on the things we had only dreamed of when we were growing up.
We were making new worlds, vehicles, robots and characters for Star Wars, as well as repairing some original props to be used in the new films. In fact, all of the original R2 units had been brought down from the Skywalker Ranch archives, and were currently in the model shop being completely gone through and refurbished.

We were getting to work on the objects that had inspired us to do exactly what we were doing – something we’d never thought would really happen!

…. And then, someone shared a thought…


I forget who dared to say it first, (because each of us was nervous that if we admitted too much of our nerd-dom, it might lead to teasing) but someone finally said “It’s kind of a bummer that we are working on the real R2-D2s; the thing that we desired the most as kids, but we can’t have him.” (Taking original parts or castings was considered grounds for firing.)

We looked around and said -

“… and there aren’t any rules about us making our own patterns and molding those….”

And so began a project that has stretched over the last 20 years or so. 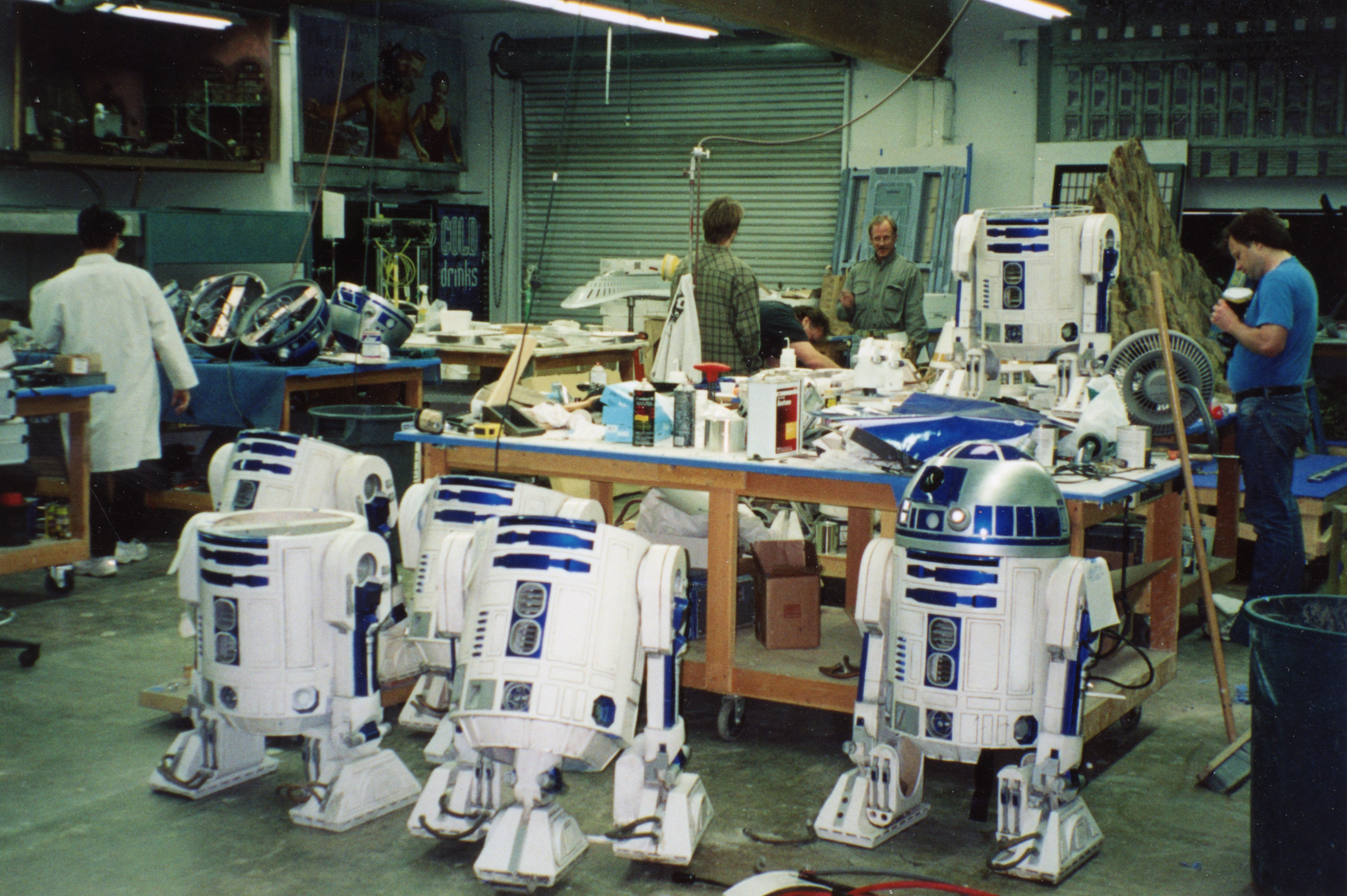 Here are some of the archive R2s during the refurbishment. 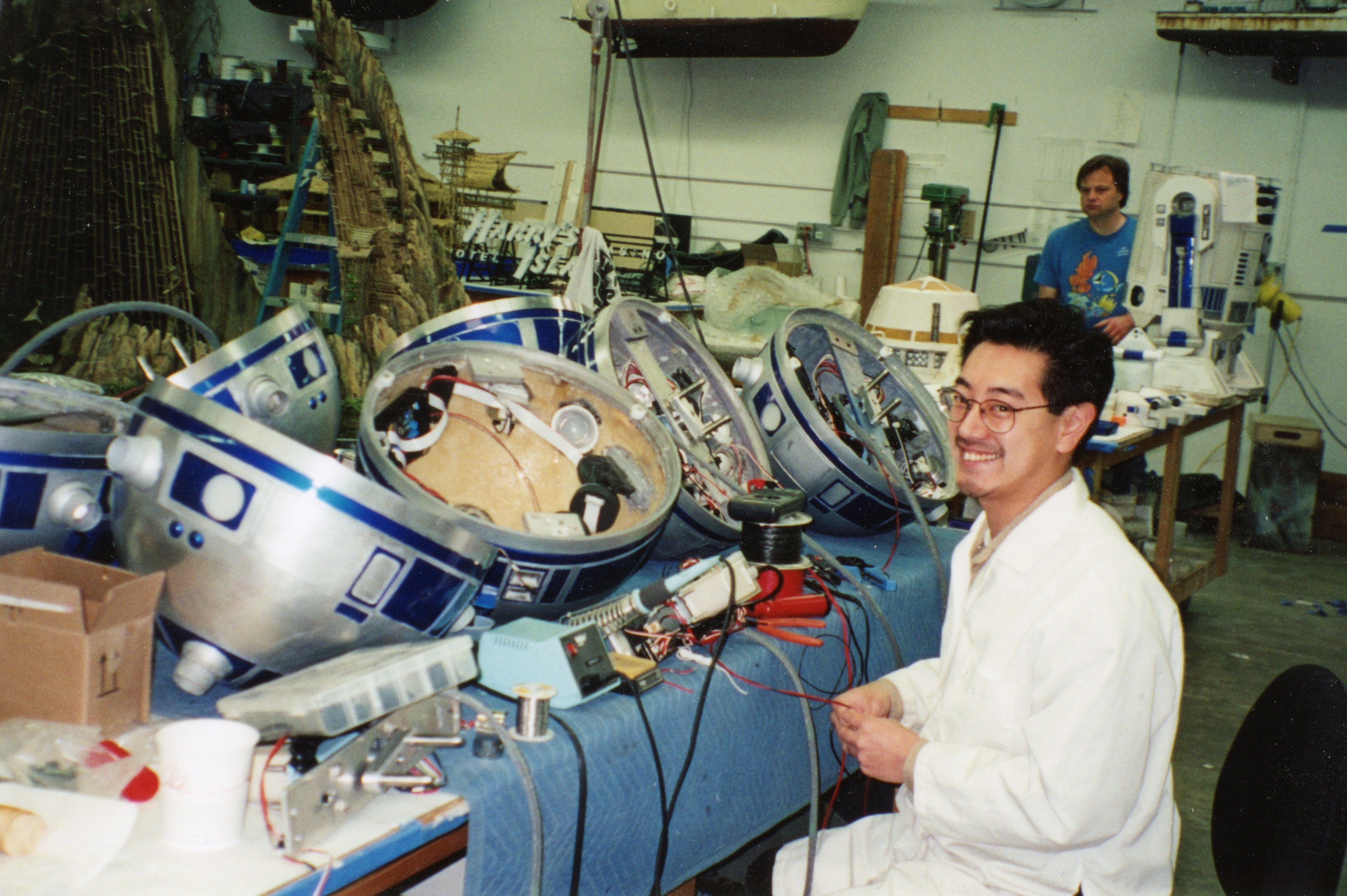 We set out to build our personal droids in a very organized manner. We called ourselves the "Romeo Drama Club". Clever, eh?

R2’s parts were catalogued and carefully measured – including all the odd misalignments that R2 has. Each member of the team was assigned parts to start making. As pieces were completed, they were marked off the list, and the maker was given a new piece to make - until all the parts were done.

Then all these master parts were molded in either silicone or fiberglass molds, and finally sets of castings were run. We all chipped in to cover the cost of fabricating and molding the parts, and running our castings.

As I recall, we had full sets of parts finished within the first year. OH THE JOY!

Of course this is when the real challenge began: Completing our own droids. Everyone had to decide how simple or complicated they wanted their R2-D2.

Accuracy is pretty much an impossible, moving target when it comes to R2-D2.


First off, there is no “Quintessential R2”. Half a dozen R2’s were made for New Hope, and they were all hand built, and none matched each other perfectly. They were each built to allow R2 to do different things, which lead to many differences. They were also modified all the way through production. So, with 6 robots playing the same droid (and sometimes other droids), there are lots of inconsistencies. Also, I can say with absolute certainty that there is no original R2 in existence that is still in the same condition that it was when originally built. None.


Legs, domes, feet, bodies and details have been swapped, altered, lost, replaced, damaged, repaired, repainted, cut apart, touched-up, etc… and that was just during the original film. Every SW film, TV show, commercial and event since then (until Disney) has reused them and added to the set of R2 droids in the Lucasfilm herd (gaggle? pod? swarm? pack?). So now there are New Hope as well as Empire and Prequel droids, with who knows how many mixed variations. 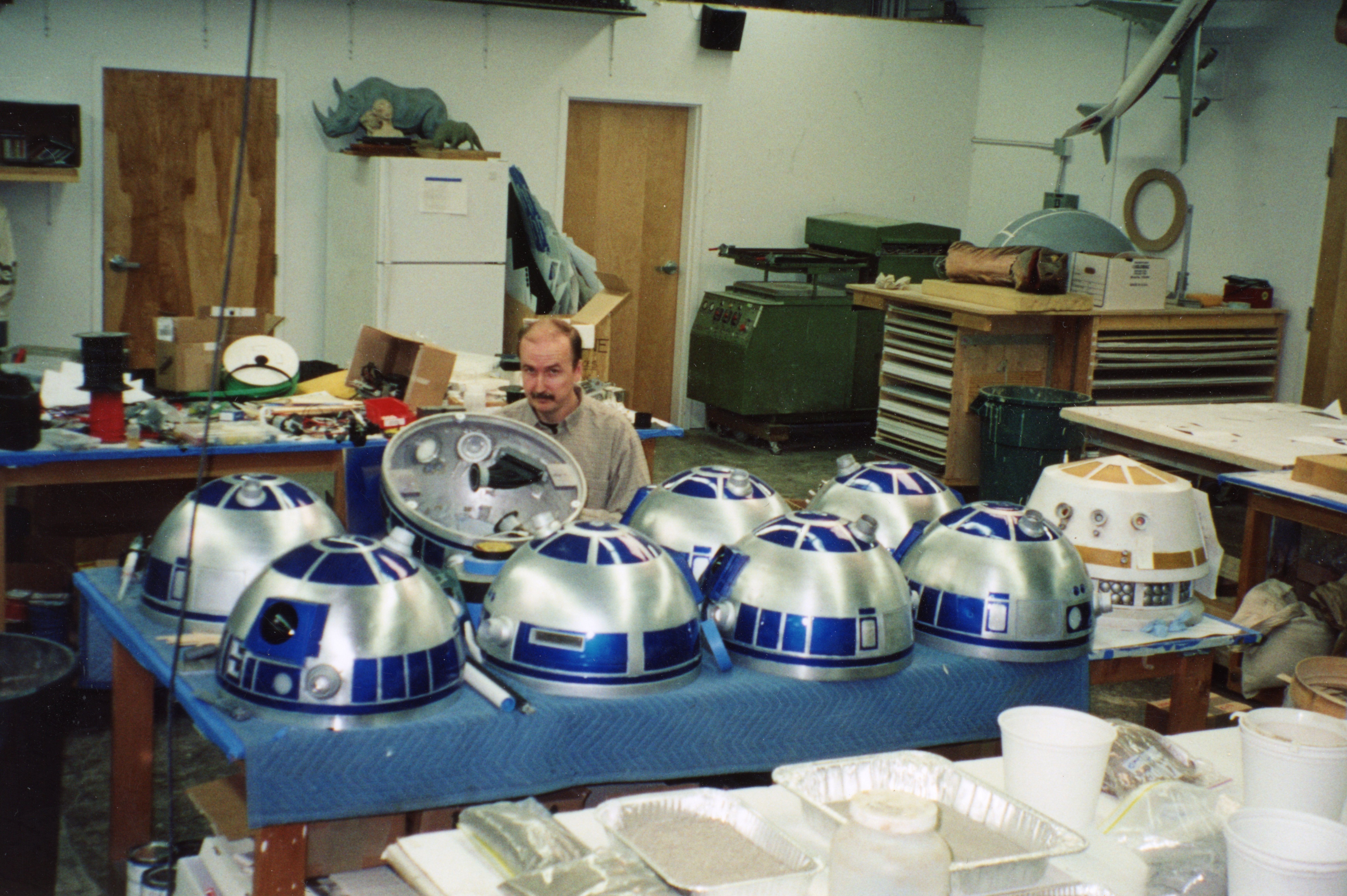 As I recall, there were twelve R2s that came in to the modelshop from the Archives. They were all mixed and matched. Some were in pretty rough condition after so many years of use and abuse. The ILM modelshop team stripped and cleaned them, and repaired and/or replaced missing parts.

Don Bies led the search for paint colors. Over the years the blue and white colors had been touched up, weathered or repainted with “close” but different colors. Don had to find parts that still had original paint on them that hadn’t been messed with.

R2’s blue color was the trickiest to nail. We ended up with a custom two-step paint color that used a purple metallic base coat followed by a blue clear coat.

I decided that I wanted mine to be based on the New Hope R2s.

Since it has a fiberglass body instead of aluminum, it'll be more like the Empire R2s. But wait again! It was made during the Prequels – so it’d be technically an Episode 1 droid.

Ah, fooey! The heck with definitions…

So instead, I made a list of what features I wanted mine to have.

- R/C controlled and drivable.
- Dome rotates.
- Authentic R2 noises
- All lights working
- Periscope
- Transition from 2 legs to 3, and back again


The last thing on that list is part of why it took so long for mine to get done - ‘cuz getting R2 to switch from 2 to 3 legs without falling on his face is really HARD. It also required me to learn some new stuff.

Every project is an opportunity to learn something new: a tool, skill, material, mechanism, technique, whatever. I think that learning is the most gratifying part of making for me. It opens new doors for other projects.

So FINALLY I'm getting to telling about my build. Sorry for the long lead in.
Please bear with me, as I'm having to scan old pre-digital age photos.

Here was my pile of parts.

I had built a motor and gearbox into the feet years ago, but better technology has come along in the intervening years, so we were in for some changes. 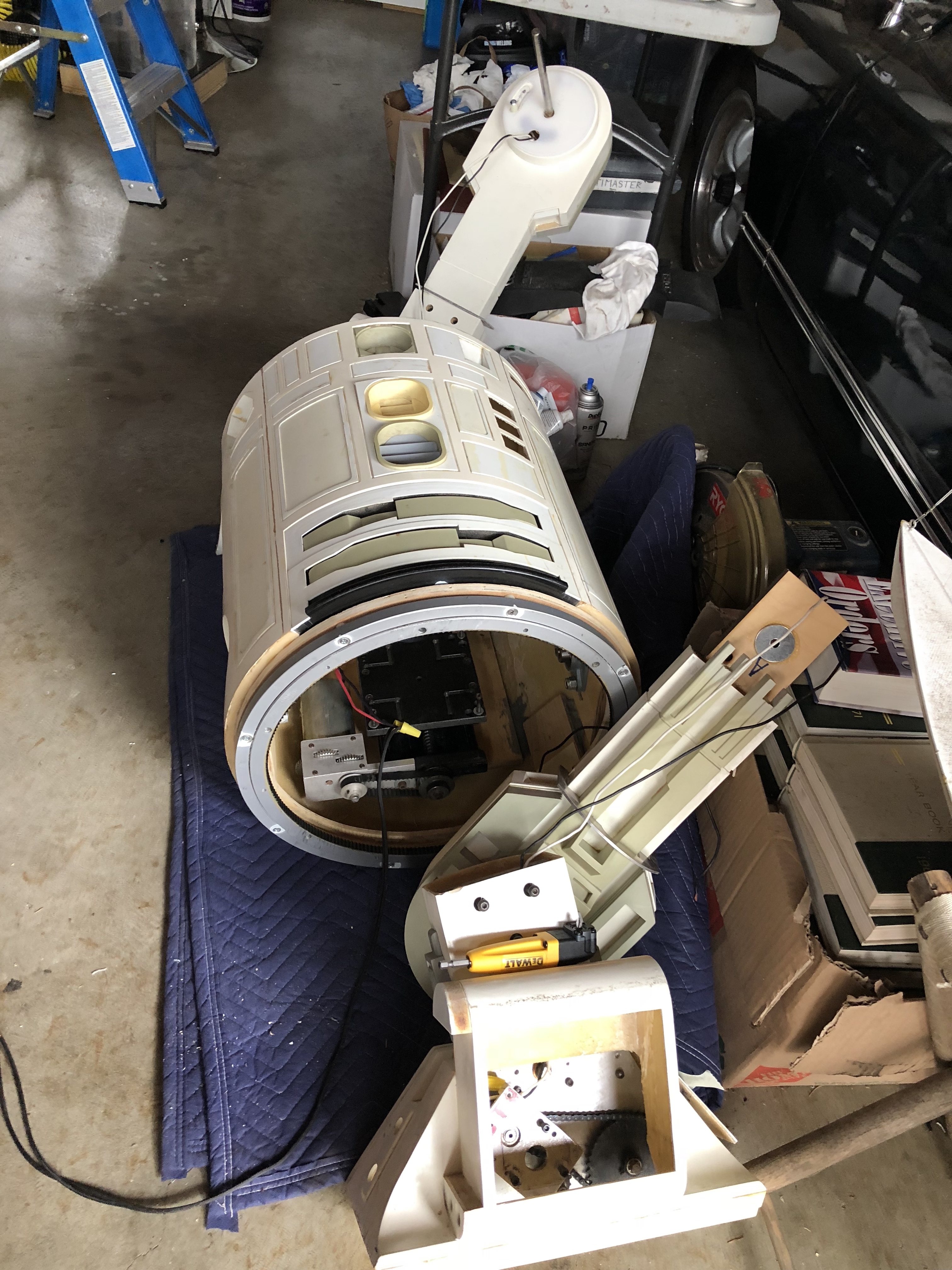 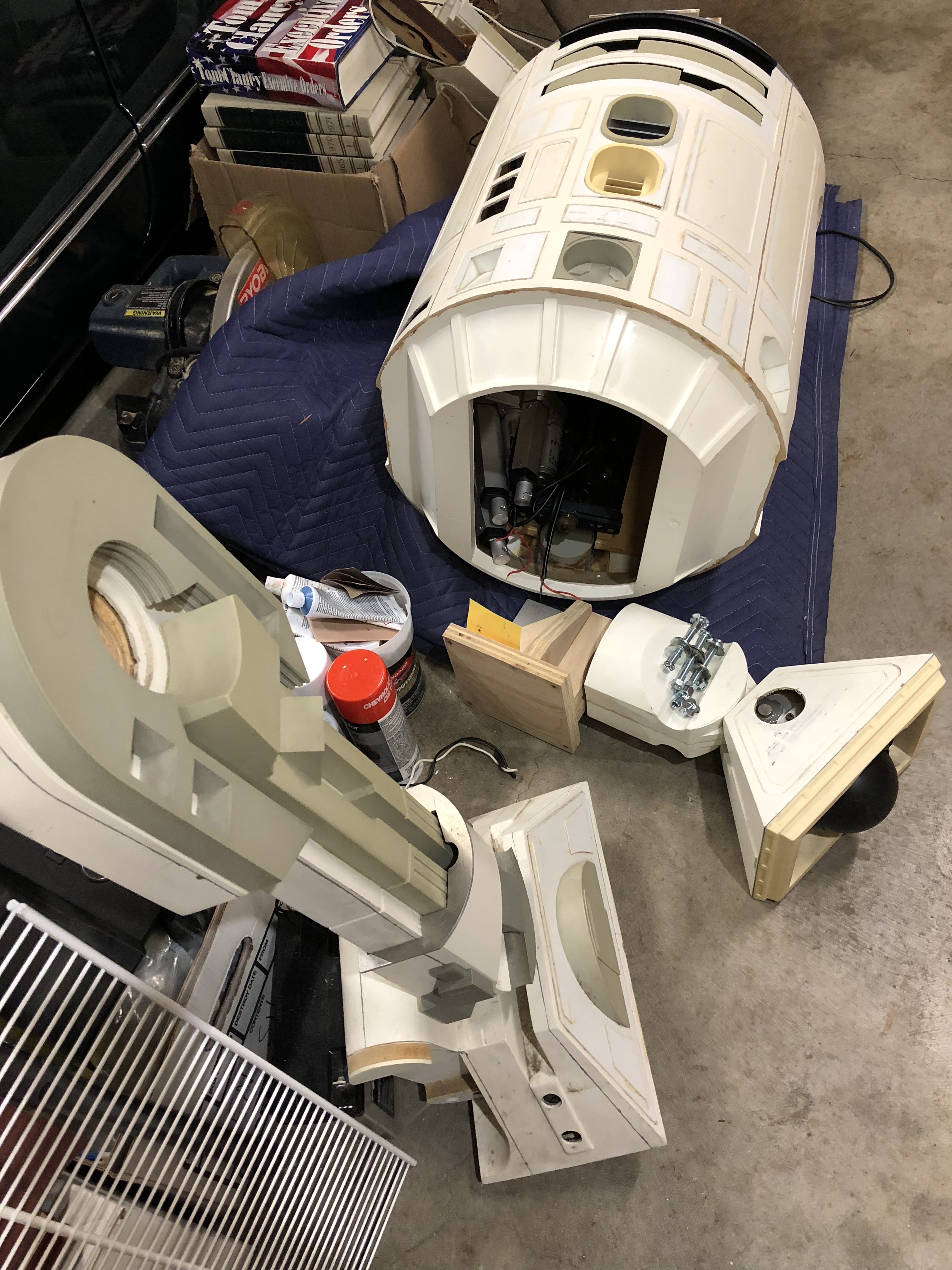 First order of Beez-knees is to swap out the old motors.
My old motors were cheap, but made up for it by being really big and not that powerful. I needed more room in the ankle area so I could install the linear actuators for the ankle.
Fortunately DeWalt makes excellent drill motors with built-in gearboxes!

I wanted to go with a 12 volt power system for R2 from the beginning, and the 12 volt DeWalt drills are dinky! 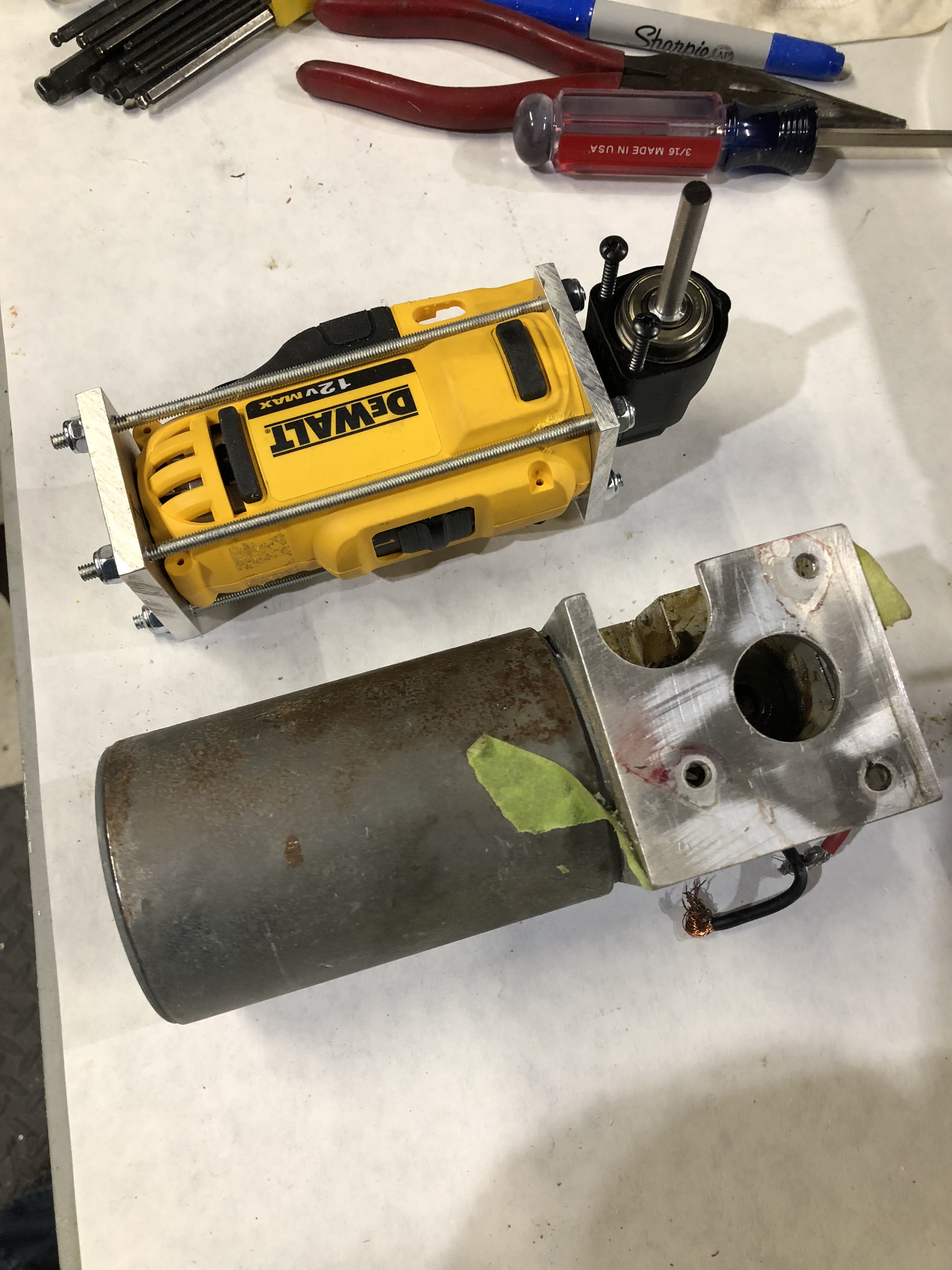 The other great thing that DeWalt makes is that tiny right-angle drive. It replaces that silver monstrosity that is bolted to the end of my old motor.
I'll cover the modifications to mount the angle drive to the face of the motor/gearbox.

Superb post, thanks for sharing.
Its good to see some of the mates in the pics too.

Wow! I can't wait to see how this continues!

RPF PREMIUM MEMBER
Wonderful story of the history and context here - thanks SO much for sharing this! Definitely following this thread!

Yah, DeWalt should have sponsored my build.
Missed opportunity!

Very cool! Yeah I think I'd lose my nerd cool if I was in that room! What I love about R2 is that the times I've been somewhere where they had a R2 replica driving around, both adults and kids will treat it like it's really R2. They know it isn't, but it's hard not to!


(Another fibreglass, multi-year build here too!)

RPF PREMIUM MEMBER
This is wonderful.. thank you

RPF PREMIUM MEMBER
I wanna hear about your time at ILM in entirety now!

After waffling about how to make R2's arms move for YEARS, I finally settled on using a bunch of linear actuators.
I had considered using sets of cams and rods to combine the ankle movements with the shoulders, but I didn't like how fussy it seemed to set up, and it didn't give me any flexibility if I wanted to do other movements with the legs and ankles.

One advantage that the cam-operated, linked-shoulder-and-ankle mechanism DID have, was that you could use one actuator to move the whole contraption. My linear actuator solution would require 6 actuators that had to be mostly in sync. If one of them didn't move right, I could end up dropping my little buddy on his face or back.
I had had to hammer out a big dent in one of the original R2 domes after it had fallen over and hit the dome on a curb - and I didn't want to have to do that again. (No, it wasn't my fault) (Really!).

I had to fit actuators in the feet/ankles now, which hadn't been part of my original plan. So I had to take out the big motors and gearboxes that I'd already put in, and find smaller ones (The afore mentioned DeWalts). My old motors and gearboxes were kind of clunky anyway. They were recycled from an old Battlebot that I'd competed with.

This is the new motor on the right and the linear actuator on the left. The actuator pulls a rod up, that rotates a triangular plate that has a 1/2" post on it that goes through a slot in the battery box and into the ankle, which rotates the ankle. Simple! 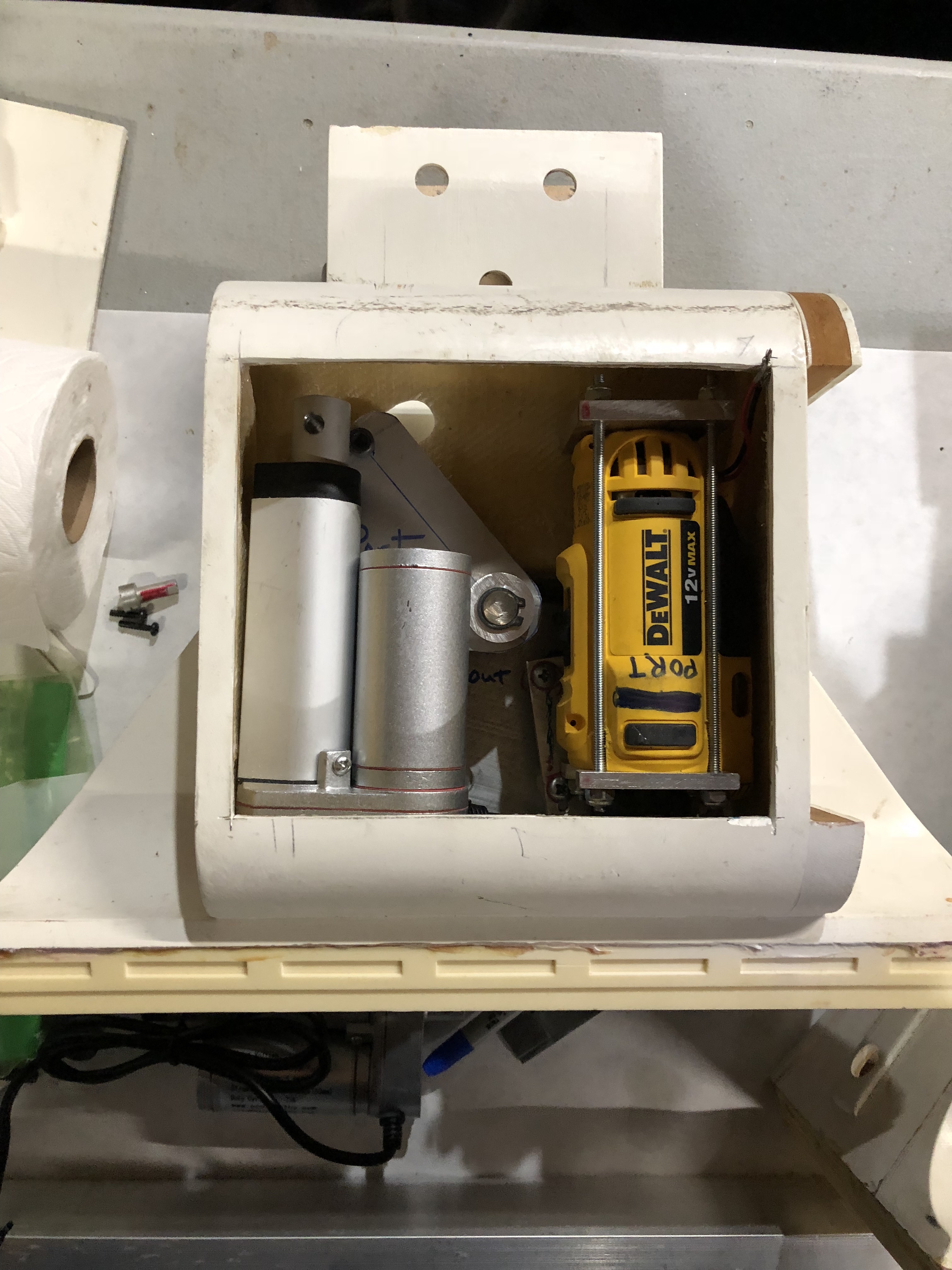